How I beat the Endless Eight

7 Comments Posted by infinitezenith on October 14, 2012

This post is pretty much endless. Skip it if you value your time.

By now, there is little doubt that the Endless Eight arc in the anime The Melancholy of Suzumiya Haruhi is one of the more controversial, if not outright hated decisions. Thus, when I first watched Haruhi a year ago, I watched the episodes that constituted the first season, then watched two of the episodes in Endless Eight, and quietly jumped to the film making episode. This pattern was simply for efficiency, as I was dying to watch the movie at the time. However, a year later, I came across my Haruhi collection and decided to watch Endless Eight in its entirety, where Haruhi’s regrets concerning summer end up causing an infinite loop. However, like all good algorithms, there is a method to force a program to terminate prematurely: in this case, Kyon must find a mechanism to ensure that Haruhi’s regrets are dispelled.

The decision to market Endless Eight proved to be a curious social experiment testing the community’s attitude towards anime: whereas I came in knowing full well how long Endless Eight was going to last and already had access to all the episodes, individuals seeing it for the first time would have been increasingly frustrated with the reiteration over two months, causing a great deal of complaining across the internet and from what I’ve heard, some hardcore fans to destroy their Haruhi Merchandise. I do not particularly feel strongly about the Endless Eight arc, but I was compelled to check out the remaining episodes that I had skipped earlier. So, if one raises the question of how I beat Endless Eight, the answer is perhaps disappointingly simple. Unlike other Haruhi fans, I merely had a priori knowledge of how long it was going to last, and mentally steeled myself to last longer. 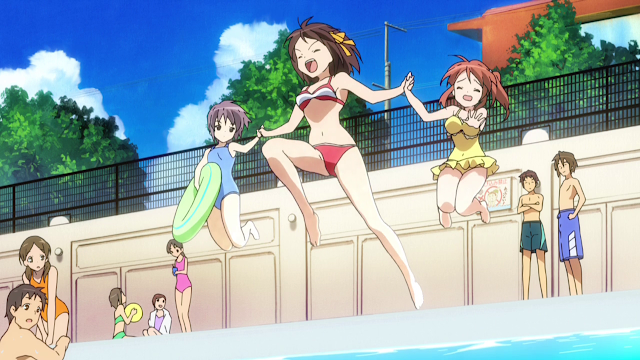 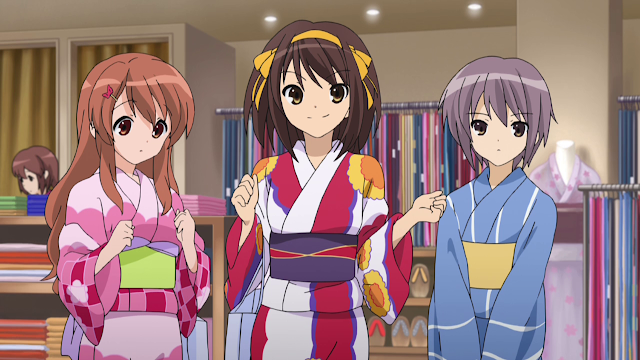 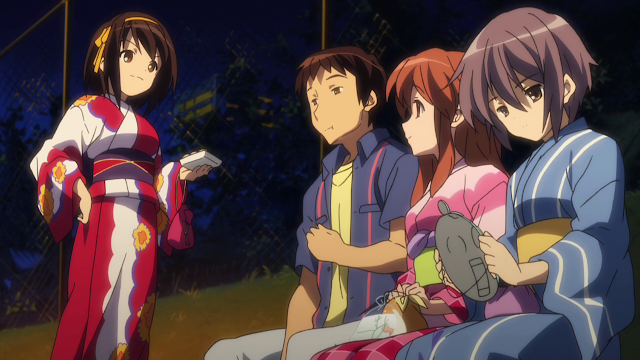 Kyon’s relaxing summer vacation is interrupted by a sudden phone call. It appears that Haruhi wants the SOS Brigade to join her in summer activities and unfortunately for Kyon, Haruhi has a long list of activities she wants to try out. As such, the group is taken on a whirlwind tour of summer activities, from swimming pools to summer festivals, part-time jobs, and bug hunting. Finally, having gone through Haruhi’s entire list, the last day of August arrives. Though Kyon tries to make up for his lost time by doing his neglected summer homework, he eventually gives in to distraction and goes to bed without finishing it. 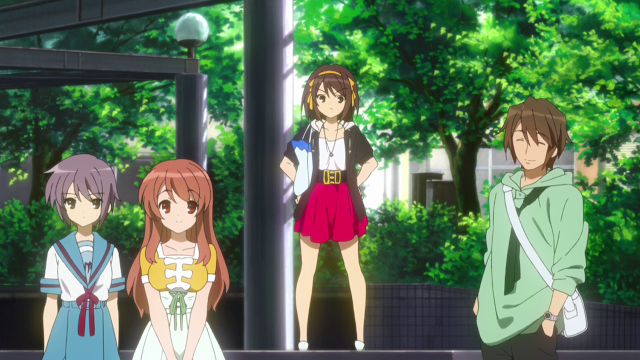 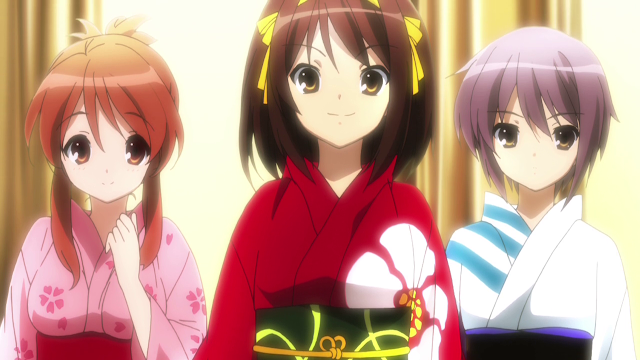 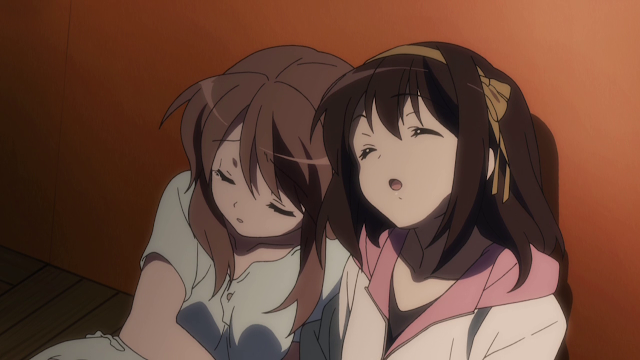 Like the previous episode, Kyon’s easy going summer vacation is interrupted as the group is taken on a whirlwind tour of summer activities. However, Kyon is wracked by a sense of déjà vu. Itsuki is likewise troubled, while Yuki seems even more detached than usual. They finally figure out that Haruhi has put the last two weeks of August into an infinite loop because she refuses to let summer end. They find out that the loop has repeated 15,498 times, but none of them can devise anything to stop the cycle from repeating. Though the repeating cycle changed during the 2391 and 11054th times when the SOS Brigade did not attend the Bon Odori festival, 437 times when they did not go goldfish catching and 9025 times when they did various part time jobs, which is divided into six different jobs. Upon their last meeting in a restaurant on August 30, Kyon calls out after Haruhi in a last-ditch attempt to stop her from leaving, but fails to think of anything he can do, and she leaves. As the last day of vacation arrives, Kyon, resigned to the loop repeating itself, goes to bed without finishing his summer homework. 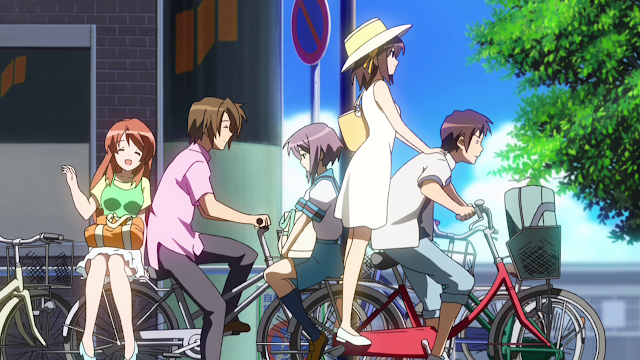 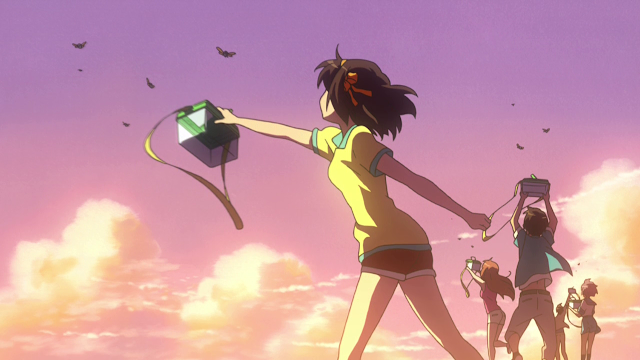 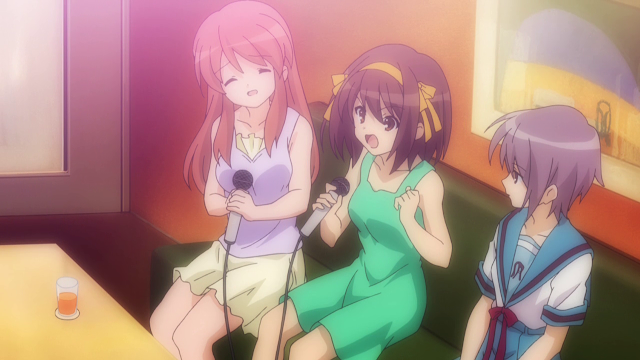 The same exact events in the previous episode once again unfold with slight variations and the gang wearing different clothes. Once again the Brigade, with the exception of Haruhi, finds out that they are trapped in an infinite loop. In this 15,499th loop, Kyon and the others once again are unable to discover how to escape the endless summer. In the same scene in the restaurant, Kyon is unable to stop Haruhi from leaving, hence dooming the world to another summer loop. Kyon again goes to sleep without finishing his homework on the last day of summer. 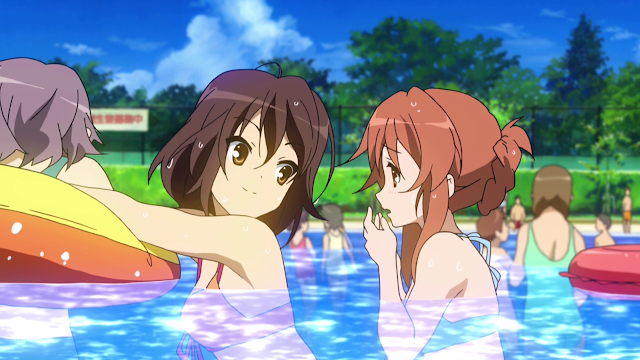 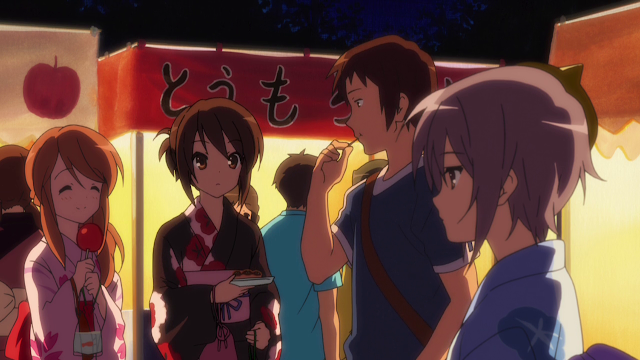 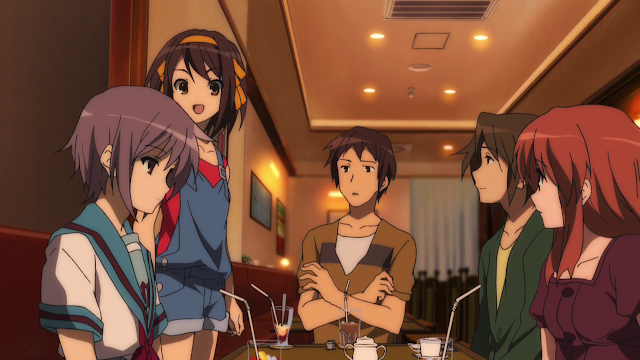 The previous time loop continues for the 15,513th time. This time, Kyon mentally senses an even greater familiarity with events and places from previous cycles. Once again, none of the Brigade members can devise anything to stop the cycle from repeating. On their final meeting in the restaurant, Kyon tries to call out after Haruhi but fails to do anything as visions of the loop’s events flash in his mind. As Kyon regains his senses, Haruhi has left. As the last day of vacation arrives, Kyon, resigned to the loop repeating itself, goes to bed without finishing his summer homework. 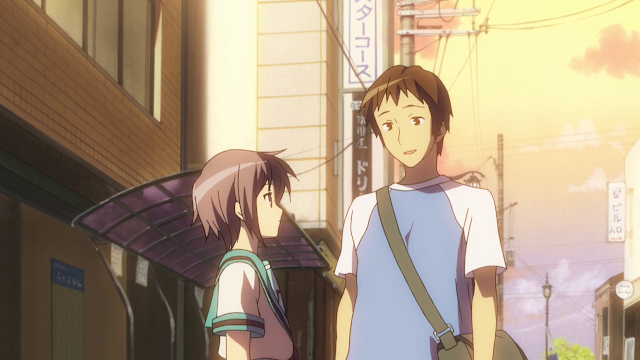 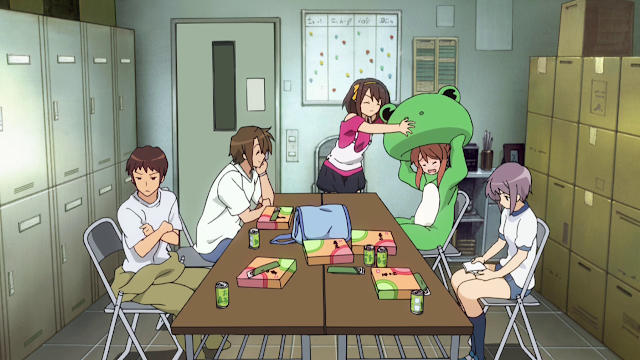 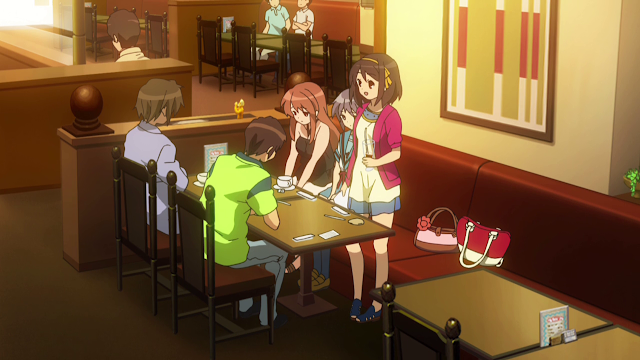 The previous time loop continues for the 15,521st time. The scene prior to Haruhi’s dismissal of group activities is repeated, showing the same event happening in this loop, and the next two loops. As the last day of vacation arrives, Kyon once again goes to bed without finishing his summer homework. 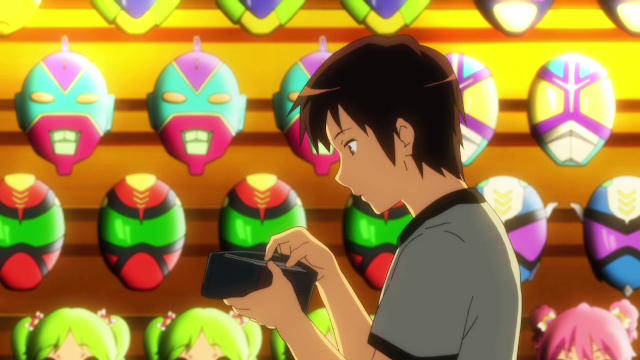 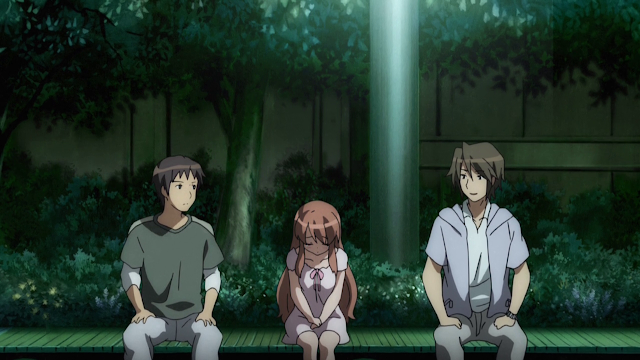 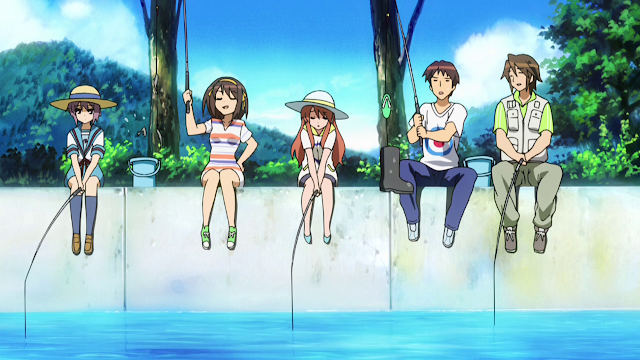 The previous time loop continues for the 15,524th time. Kyon rides his bike and approaches Yuki. In that moment, he speculates his reason for doing so and simply lets her leave without conversation. Kyon goes to bed without finishing his summer homework once again. 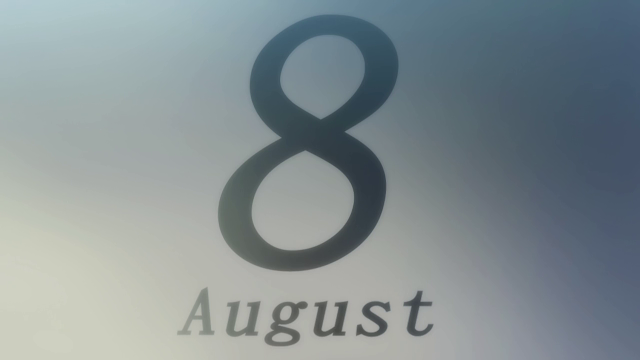 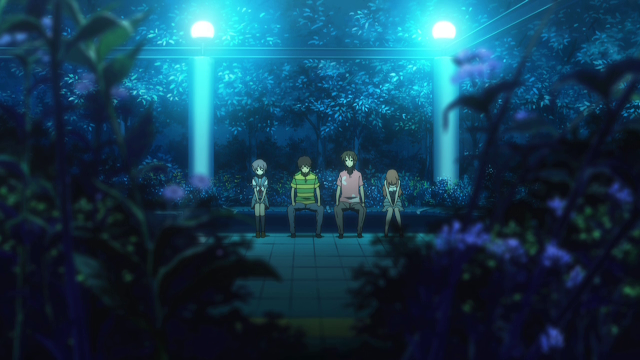 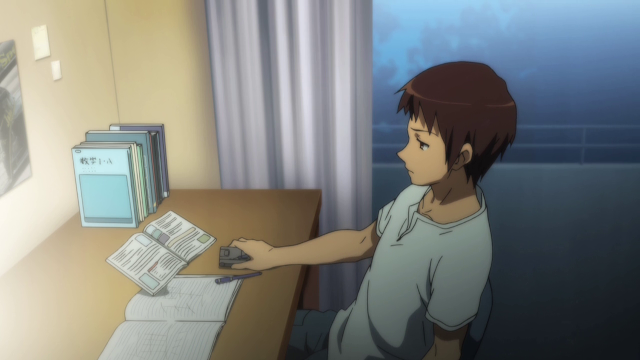 The loop continues for the 15,527th time. The scene where Kyon answers Haruhi’s call loops twice, the scene in which Kyon notices Yuki at the pool loops twice, and the scene where Haruhi says she left the last day of summer open just in case also loops twice. Kyon once again goes to bed without finishing his summer homework. 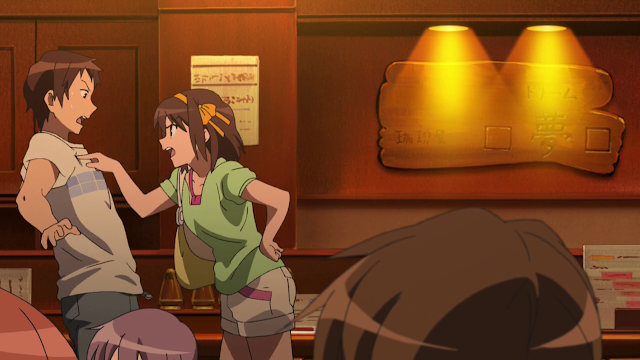 The loop continues for the 15,532nd time, but as Haruhi leaves on August 30, Kyon beckons the SOS Brigade to finish their summer homework together, thus breaking the endless loop of summer. Irritated, Haruhi berates him, but decides to come anyway even though she has already finished her homework. Kyon wakes up on September 1 to embrace a new school term.

While Endless Eight induced rage in countless reviews (of note is one reviewer who tried to justify his decision to not review it and ended up doing so anyways, and one attempts to convince all ‘worthy anime fans’ to complain about it as loudly and obnoxiously as they could), I personally have no qualms about Endless Eight. Recall my decision earlier to watch only two of the eight episodes and its motivations for efficiency more than anything else. Armed with a bit of time, I resolved to watch one episode per week since the beginning of August in my spare time until the remaining five were done.  Thus, it was fun to rewatch more or less the same episode repeatedly gradually, given I had full knowledge of what was to happen. Perhaps I would have dropped Haruhi if I had been watching it on a weekly basis back in 2009, but most parties by now have moved onwards with their lives. For parties interested in watching this, I would recommend the first two and last episodes for the sake of efficiency.

7 responses to “How I beat the Endless Eight”