This, sadly, won’t be the case. More appropriately, one might say that Girls und Panzer would be soremade, or “that’s it”. Having caught up with all the episodes of Girls und Panzer, it is doubtlessly disappointing to see that episode eleven and twelve will be released somewhere in March as a consequence of unforeseen issues. Mizushima Tsutomu, the series’ director, expressed his regret at these delays, citing issues in planning and management to have precipitated unanticipated hiccoughs in the release schedule. We recall the  Project Management Triangle that I discussed in my first half reflection; by the sounds of it, Tsutomu had wished to create a series with great emphasis on detail in both the armour and characters. By the Project Management Triangle paradigm, Tsutomu has emphasised ‘good’ and ‘cheap’, thereby sacrificing the ‘fast’ aspect. However, from what we’ve seen thus far, the quality alone makes these final episodes well worth the wait.

Girls und Panzer episode 11, supposed to air starting 24th December, will not be completed in time, and episode 10.5 will air instead. There are many ways to call this kind of thing, but honestly speaking, it’s a recap. Furthermore, even the schedule for episode 10 has become tighter than ever. Under normal circumstances, drawings are finished grouped in cuts, and those cuts are later corrected via a process of trial and error. But it will be necessary to air without fully completing those adjustments.

As to why it has come to this, the fault lies in my naïve planning. It is because creating an original series made me greedy. While having to maintain a good balance and keep to a tight schedule imposed by a TV series, I wanted to show both the characters and tanks as much as possible. My selfish thinking brought about this result, causing quality drops and postponements.

I am truly sorry.

Regarding episode 10, a fully revised version will obviously appear on the BD/DVD release. Of course, the same goes for all previous episodes. I guarantee that when episodes 11 and 12 air, they will represent a level of quality that will satisfy all viewers. I have no right to make this request under such circumstances, but please wait until that day. I am repeating myself, but I am terribly sorry for disappointing everyone waiting for the broadcast.

At the same time, I would like to thank the many people who enjoyed Girls und Panzer until now. Their encouragement has been a great source of support for me as well as for the staff and VA cast involved in the project. Personally, I do not think that the ending of episode 12 will mark the end of this story. Sometime, somewhere, I would certainly like to present a little something to repay the fans for their support. 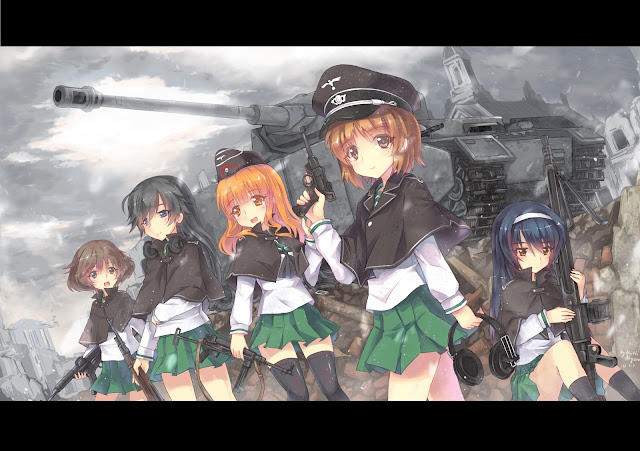 While fans have been left waiting for the remaining episodes, Mizushima Tsutomu has promised that these episodes will be of an excellent quality; in the meantime, two known OVAs will grace the home releases. One has already been released, and the other is set for release in February. From a personal standpoint, the delay sets the release of the final episodes within the same timeframe as Gundam UC Episode six, meaning I’ll have not one, but two excellent stories to look forward to come March.