I was told that Metro: Last Light was a game that would put my new machine to the test back in January, when I was contemplating the specifications for the machine I would build come late April. By the time April arrived, a promotional offer with NVIDIA meant that I would be getting a free copy of the standard edition of Metro: Last Light. My video card was eligible for the promotion, and as such, I would have gotten another game to add to my library. However, owing to mis-communications, my video card shipped without the promotional code. An email to the supplier rectified that, and I pre-loaded the game off Steam yesterday evening, before it unlocked today. 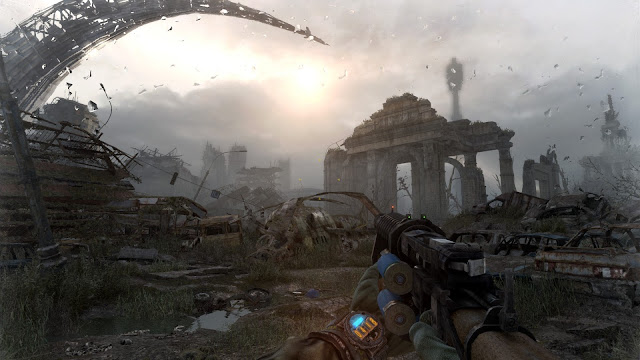 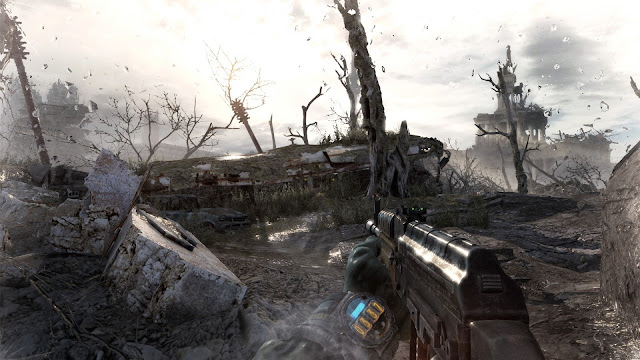 After hearing numerous grievances on the Steam community about FOV limitations, crashes when changing the resolution, and menu layout bugs, I decided to load the game up for the first time and see if these errors were indeed a possibility on my system. Fortunately, the game got to the main menu without any issues: the fact that Steam began downloading a patch may have rectified some of these bugs (other sources report that the game randomly locks up and crashes, has issues saving, or minimises one to the desktop every few minutes). From the half-hour of the game I’ve experienced thus far, the game is smooth, detailed and intricate. The tunnels are dark and dank, while the surface depicts all of the beauty of a once-great world. The guns are unlike those of any shooter I’ve played previously (including Borderlands), and feel powerful: shortly after arriving at the surface with Anna to hunt down the “Dark one”, a pack of monsters show up, and I cut them down with my assault rifle. As I jump through pools of water, my visor becomes mucked up, forcing me to clear it with my hand. I stopped playing after my character, Artyom, gets captured by what appears to be the Nazi Reich and was left with a sense of awe at what the game can accomplish. Assuming this game doesn’t crash on my adventures through the post-apocalyptic world, I foresee a great adventure ahead of me: critics have given the game positive acclaim for the fact that Metro: Last Light plays with a similar dystopian atmosphere to Half-Life 2. Considering that the latter is nearly ten years old now and still sets the benchmark for story and atmospherics, this is no easy feat and bears testament to how immersive Metro: Last Light is.

3 responses to “A first look at Metro: Last Light”