Jinta Yadomi and his group of childhood friends have become estranged after a tragic accident split them apart. Now in their high school years, a sudden surprise forces each of them to confront their guilt over what happened that day and come to terms with the ghosts of their past.

A year ago, I had begun watching Ano Natsu de Matteru: I recently began longing for an anime with a similar atmosphere, and was recommended Ano Hana. It is technically around a month to summer, but nonetheless, this seems as good a time as any to begin watching an anime set in the most interesting season of all, the summer. I’ll try not to procrastinate with Ano Hana, now that classes are over, but with several games and other anime on my backlog, I cannot guarantee anything.

Jinta “Jintan” Yadomi is being pestered by a girl named Meiko “Menma” Honma, who only he can see. Menma says she has a wish she wants him to fulfill, but she can’t remember what it was. Soon, she recalls that the dream was to have their friends all together again. One of the former friends, Naruko “Anaru” Anjou, drops by Jinta’s house to drop off some homework, but is on bad terms with him. It is revealed that Jintan has poor school attendance. As Menma pesters Jinta to go after Naruko and talk to her, they both go into the city where they run into two other former friends, Chiriko “Tsuruko” Tsurumi and Atsumu “Yukiatsu” Matsuyuki, the latter of which reacts harshly when Jinta accidentally drops Menma’s name. Frustrated, Jintan runs off and leaves Menma behind. Jinta begins to recall the past when he, Menma, and their other friends were part of a group known as the Super Peace Busters that hung out together when they were children. One day, Jinta accidentally hurt Meiko’s feelings when asked if he liked her. He decided to apologize, but she died in an accident before he could. Back in the present, Menma visits her family’s house. Jinta decides to search for Menma so he could finally apologize and he checks out their old secret fort. Here, he runs into the last of the six old friends, Tetsudou “Poppo” Hisakawa. 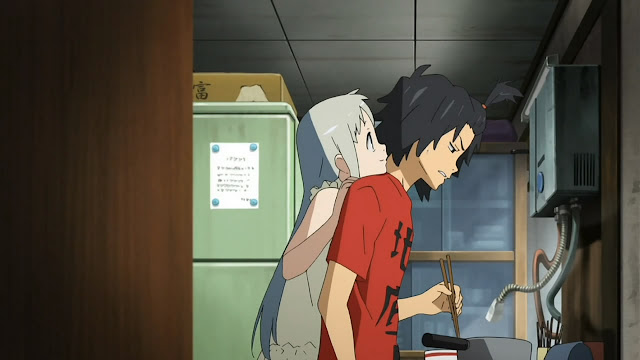 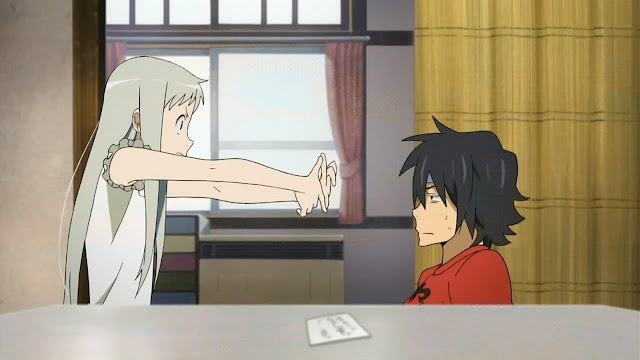 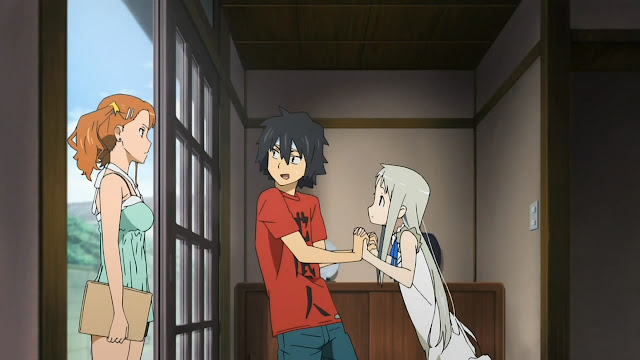 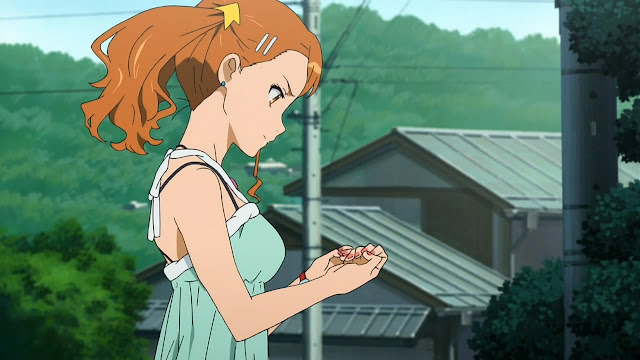 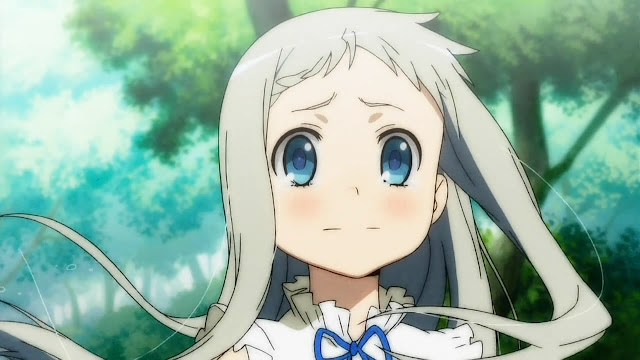 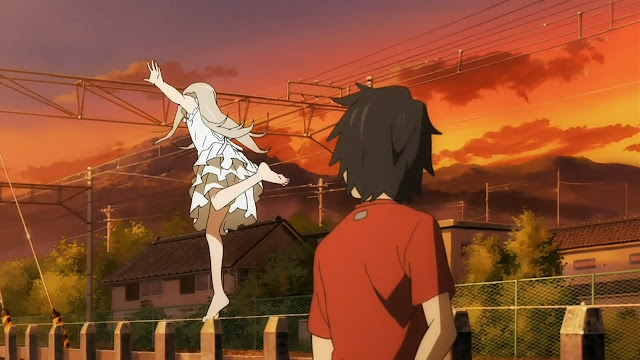 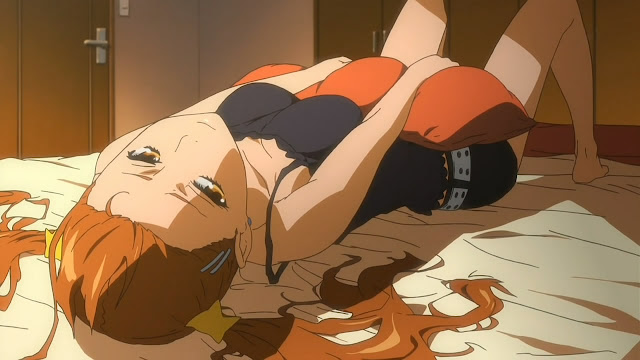 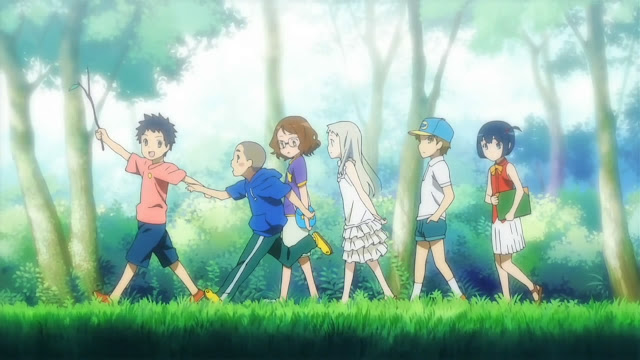 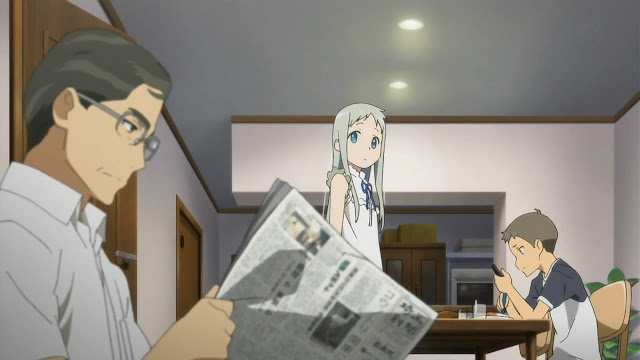 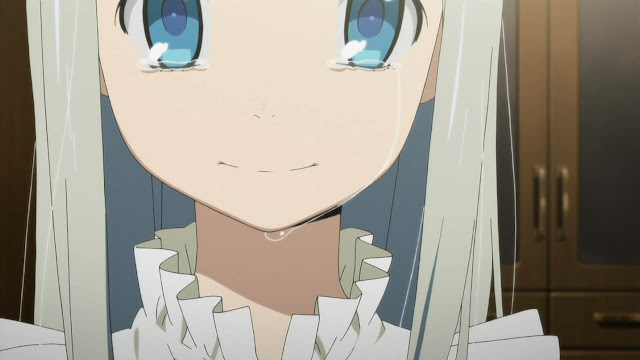 I’m probably going to refer to this anime as Ano Hana for brevity, since the English title is Ano Hana: The flower we saw that day (and the anime is literally translated as We Still Don’t Know the Name of the Flower We Saw That Day). My interest to watch this series stemmed from seeing its superficial similarities to Ano natsu de matteru, in particular, the fact that both anime are predominantly set in the summer and have a similar, nostalgic sense of longing to them. The first episode sets the stage for what is expected to be a powerful, character-driven story that is unlike most of the other anime I have: from the flashbacks interspersed throughout the episode, viewers are left with a sense that there is far more to Ano Hana than is initially apparent, as evidenced by Jinta’s isolation from the rest of the world. After the episode ends, viewers are fully aware that something heartbreaking happened, although the precise nature has not been explicitly given yet this early on. It is summer now, and as such, it is time to see where this anime takes me. At this point, I will also apologise to my aggregator (which I didn’t even know about until recently), but I do posts on a diverse range of things, rather than just anime. In light of the fact that I am now on an anime news aggregator, I will try to ensure that I post about anime every so often to balance out the posts about BOOM HEADSHOT!