As per the title, it’s been a year since the K-On! Movie was released. On July 18, 2012, I had the opportunity to see the movie for myself. At the time, I had an MCAT looming over my head, and had spent the entire summer in preparations for the exam. I spent the entirety of the morning doing a practise full-length exam under exam conditions. By the time I had finished (the practise exam yielded a 33T), I was exhausted and desired little more than to relax. Thus, I would begin watching the K-On! Movie and came out of the movie refreshed, slightly less stressed than I had previously been. I would write a review for the movie shortly after, on July 20, where I would note the movie’s strongest points were its atmosphere and presentation. I would watch the K-On! Movie a second time on August 9, the day before the MCAT, to steady my nerves (for those taking the MCAT, I can say that studying on the day before is probably counterproductive and may increase stress). This year, though, there is no MCAT on the horizon, and as such, I opted to watch the movie once more in its fullest glory. The movie itself is a completely different experience, and, though opinion of it has remained unchanged, I do find subtle elements that deserve mention. My original K-On! Movie review post may be found here.

K-On! has always presented itself as a simple, yet distinguished anime franchise, succeeding in evoking a sense of nostalgia in its viewers about their own days as high school students. The movie carries on this tradition, depicting the girls going about their daily lives in a carefree manner in what is one of the most sincere (if not ideal) representations of life as a high school student. The fact that the girls choose to go abroad for the movie ultimately drives home Yui’s point, that Houkago Tea Time will always be as thus, regardless of where they are in the world.

London, upon first glance, seems to be as far removed from the girls’ homes in Japan, and indeed, less than half of the movie itself is set in London. Travel is oftentimes said to be a fleeting experience: we tend to remember everything leading up to, during and following the vacation. The movie captures this feeling, illustrating the girls’ journeys through London in a short but memorable montage as they visit sights and attractions, even coming across two instances requiring them to break out their instruments and perform in front of a crowd. Whether it be in a foreign cafe, a Japanese Culture Fair, in front of their classmates or for Azusa, the girls continue to remind their audiences that they are Houkago Tea Time and as such, apply their own twists to doing things. By setting the movie in London, this point is driven home, reminding users of just how deep the friendship is between Yui, Ritsu, Mio, Mugi and Azusa to further give the movie a solid focus.

The movie’s portrayal of London’s citizens is an integral component to providing an immersive feel to the girls’ adventures through London. Presented as friendly, accommodating and helpful, the movie even casts native English speakers to voice the English-speaking characters. In most anime intended for a televised broadcast, characters speaking foreign languages (most commonly, English, German and Russian) are Japense voice actors with a reasonable proficiency in the required languages. The fact that native English speakers are cast here demonstrates the effort that went into the movie’s production, and the sense of immersion this creates speaks for itself, furthering the movie’s sincerity.

Upon seeing all of the promotional materials, initially, I expected the movie to be about the trip to London, but I’d be missing the forest for the trees under such an assumption. The movie makes it explicit that the entire story is built around Yui, Mio, Ritsu and Mugi’s wish to craft an appropriate farewell gift for Azusa. Choosing a meaningful gift is a challenging process, and viewers are given an opportunity to explore this process. The girls hold true to their mannerisms throughout the process, and never force themselves to be something they are not: everything we’ve seen of the girls from the TV Series makes a return in a comfortable, familiar manner. In doing so, they create a final product that is well-suited for conveying exactly how the girls feel about Azusa.

Music features more prominantly in the movie than it did in the TV series, with each of the girls’ performances becoming increasingly intimate in nature. K-On! has always made it clear that Houkago Tea Time’s music was a product of their friendship, and that their friendships were at the forefront of everything they participated in. However, of all the hobbies the girls could have chosen, they pick music. Why music is suitable, especially for a series of this sort, boils down to something I cannot quite recall the source of: music provides the means to express emotions far more effectively than words alone. It follows that the intricies of friendship would be best depicted in music; for the K-On! Movie, the music itself reflects on how the girls feel about each of the different settings they perform in. They pick the more generic “Curry Nochi Rice” while performing at the Cafe (chosen on the spot out of nervousness), “Fuwa Fuwa Time” and “Gohan wa Okazu” at the festival (familarity and expression of the girls’ identity, respectively), “U & I” and “Samidare 20 Love” for their classmates back home, with “Tenshi ni Futera Yo!” as a highly personal and emotional song for Azusa.

Until the movie, we’ve only seen Yui, Mio, Ritsu and Mugi practise briefly on-screen: Azusa notes this frequently, wondering how the rest of the girls perform at such a calibre throughout the series. Their song-writing processes were hinted at occasionally during the anime, such as Mio dropping off some lyrics for Ritsu during a season one OVA and Yui’s inspiration to write “U & I”. In the movie, the underlying details to the song-writing process are elaborated upon with “Tenshi no Fureta Yo!”. The process of composing a proper melody and set of lyrics is explored in greater detail than the anime had done, giving viewers a sense of just how much thought and emotion goes into each song. Seeing this process would suggest that each song would have required roughly the same effort to compose in the series. While it was omitted in the series, the composition process makes a late but welcome return in the movie, finally allowing viewers to see how the girls write music.

The K-On! Movie feels like an extended episode, essentially taking all of the strongest points about the anime and refining them in the movie format. With a steady, casual pacing that reflects on the Houkago Tea Time’s mannerisms and visual quality that speak volumes about the incredible production value, the film’s focus is cohesive and succeeds in telling a story about a group of close-knit high school students in their two journeys, towards both saying farewell to a friend and towards a foreign city. In particular, the pacing in the movie deserves recognition: whereas other anime movies immediately delved into their respective stories, the K-On! Movie proceeds in such a manner as to allow even those unfamiliar with the franchise to pick up who’s who and what’s going on. By the end of the movie, even the uninitiated will feel at home when watching the girls sing for Azusa in their final farewell to a dedicated friend. 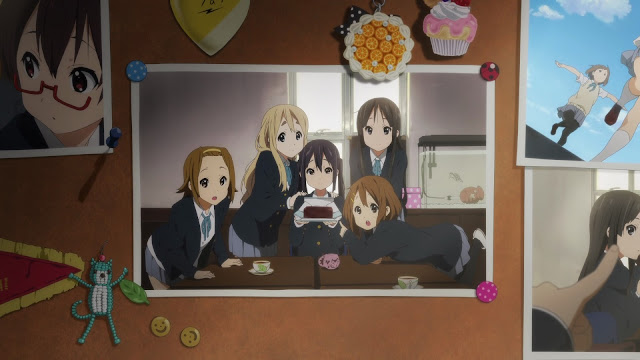 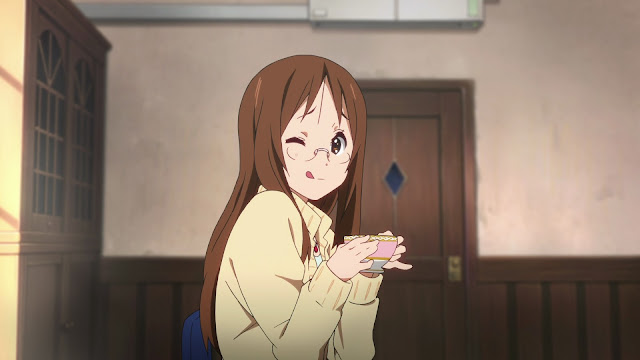 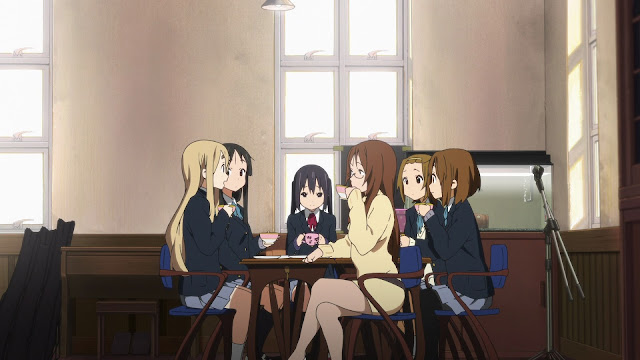 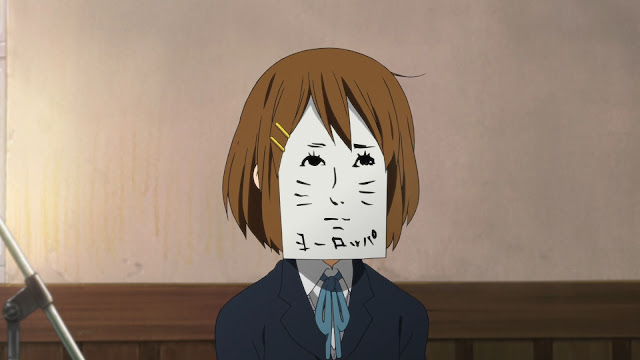 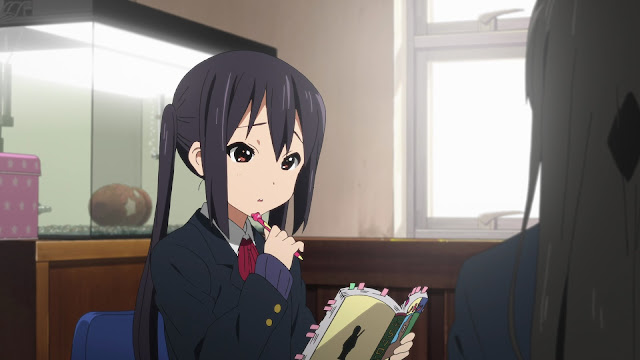 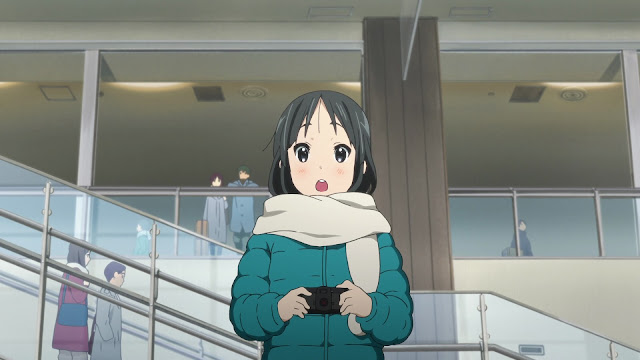 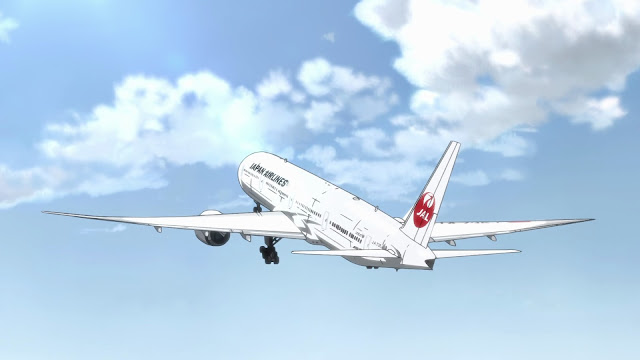 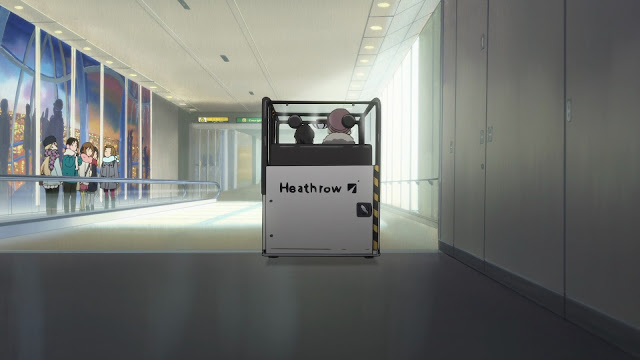 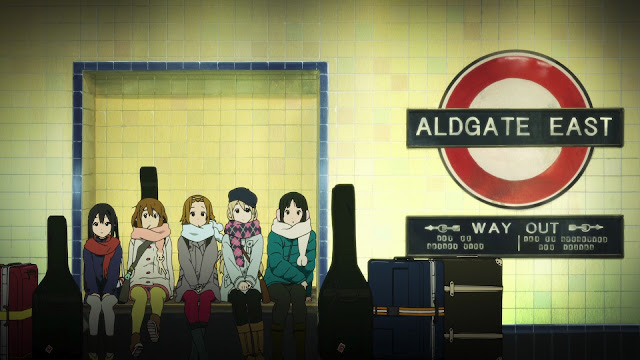 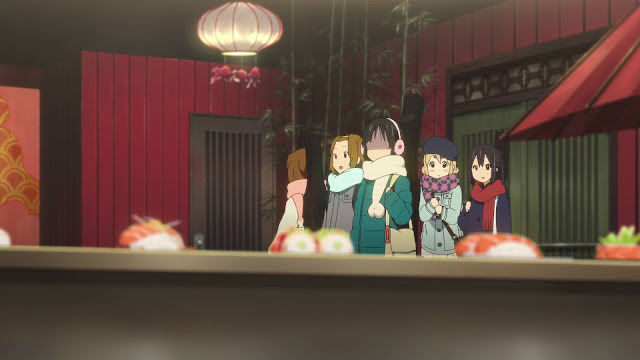 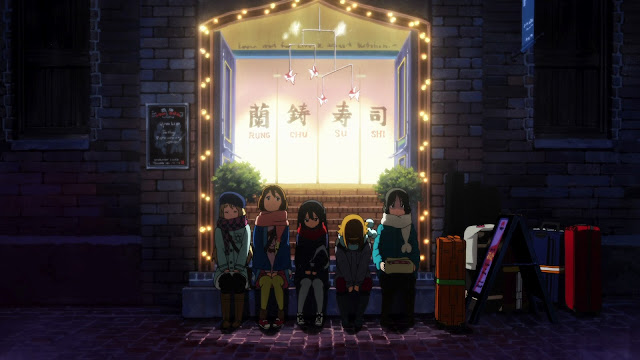 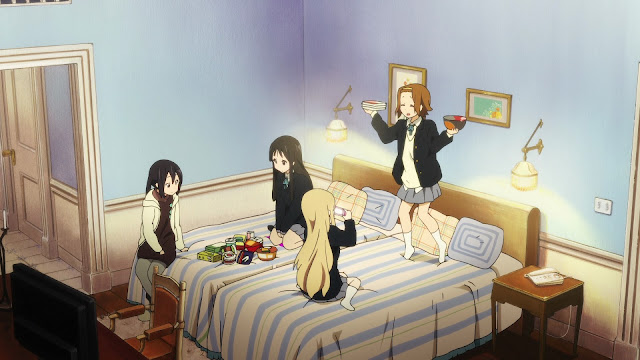 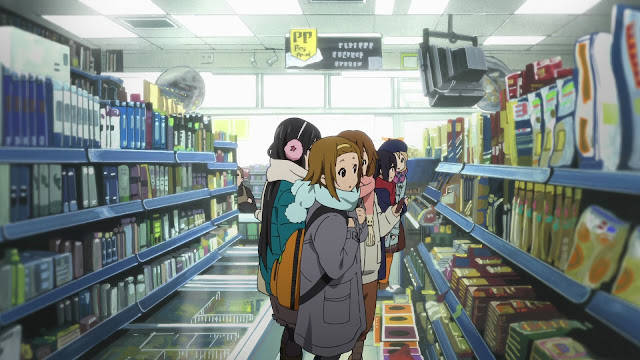 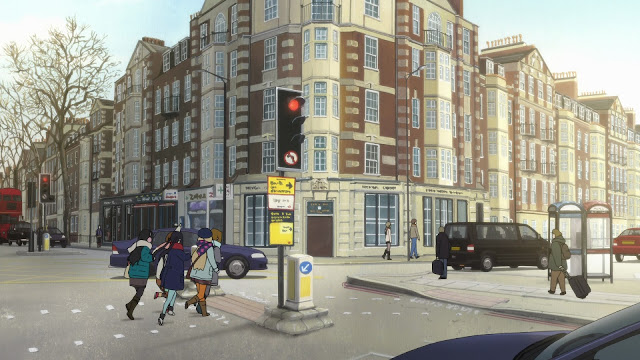 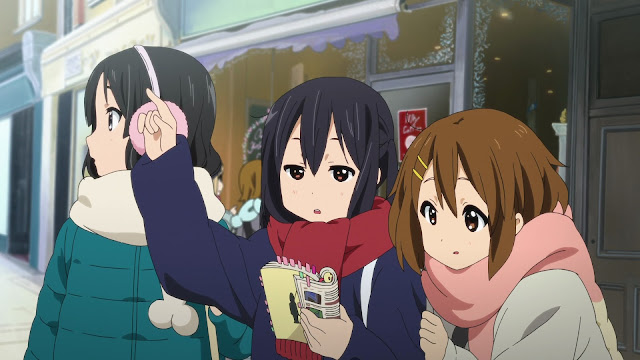 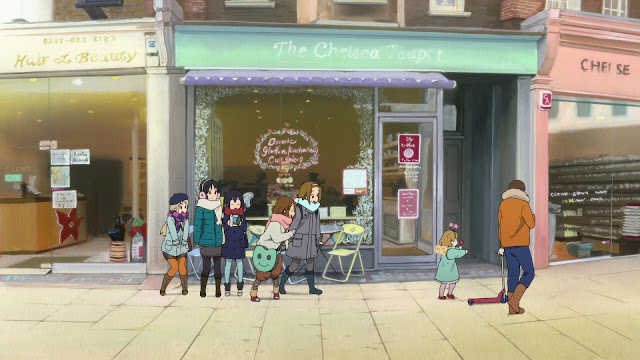 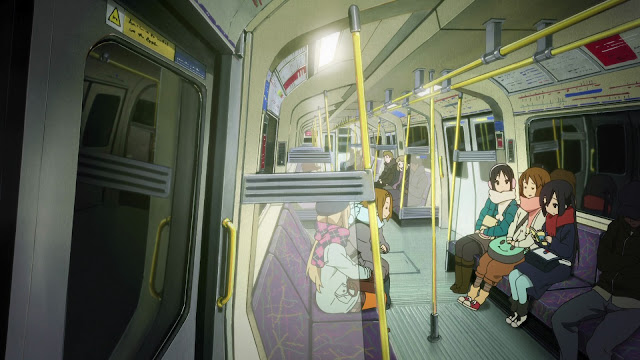 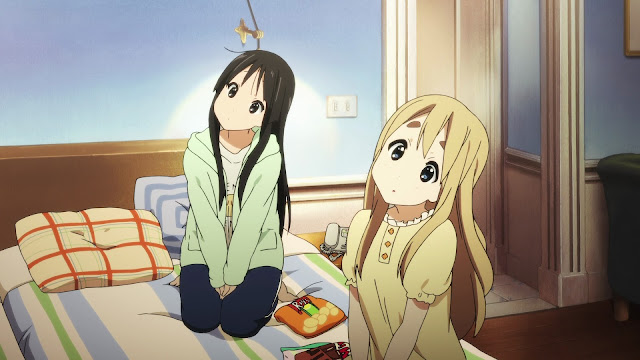 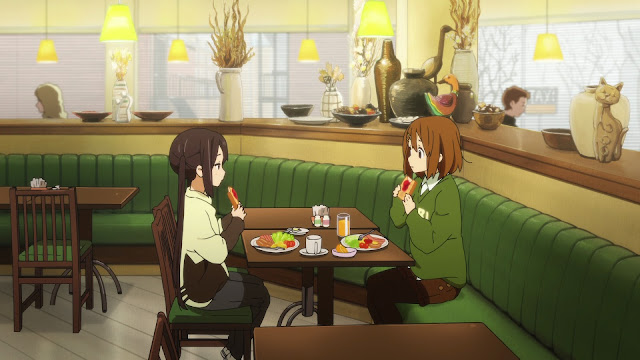 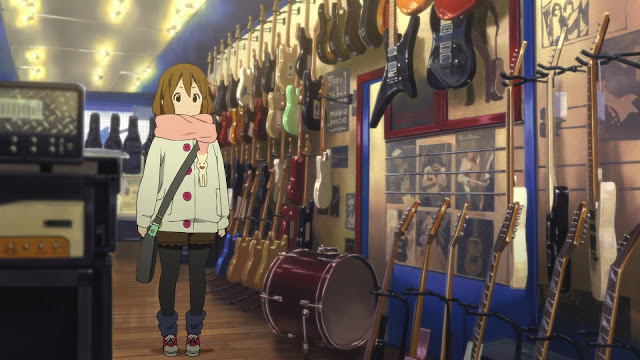 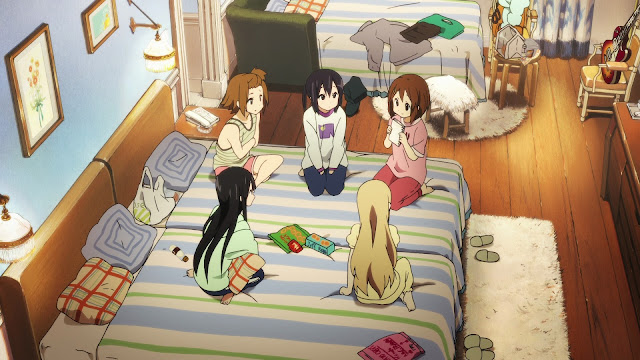 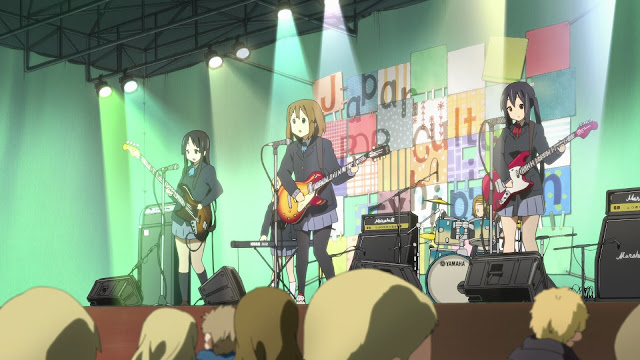 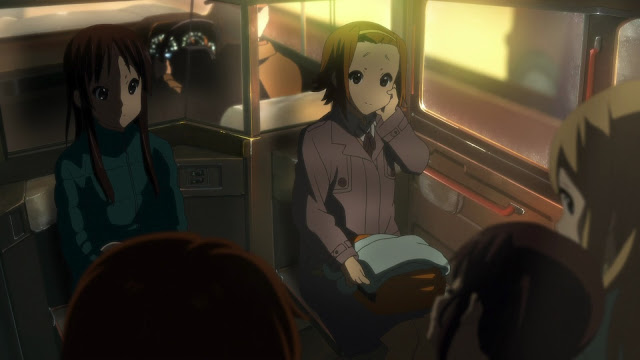 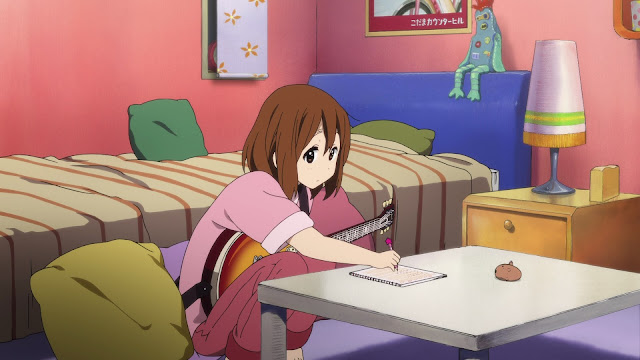 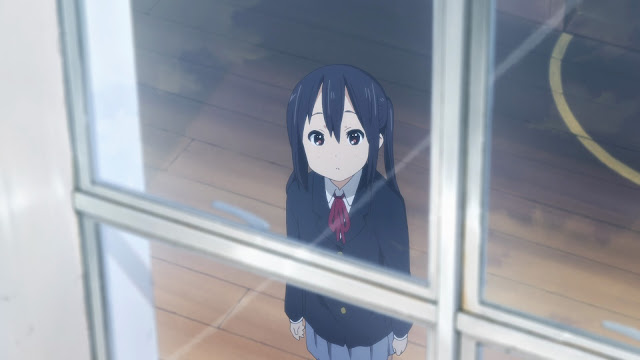 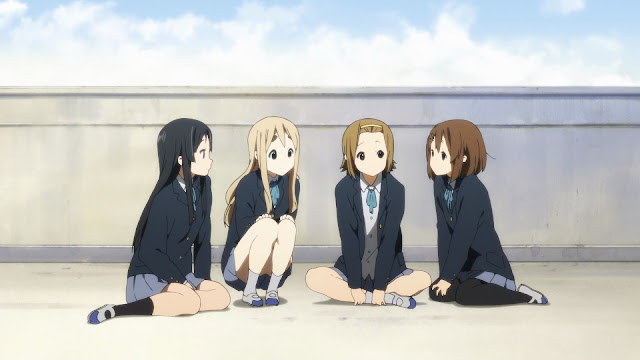 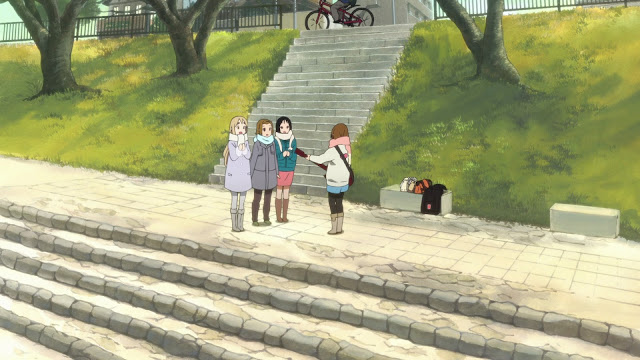 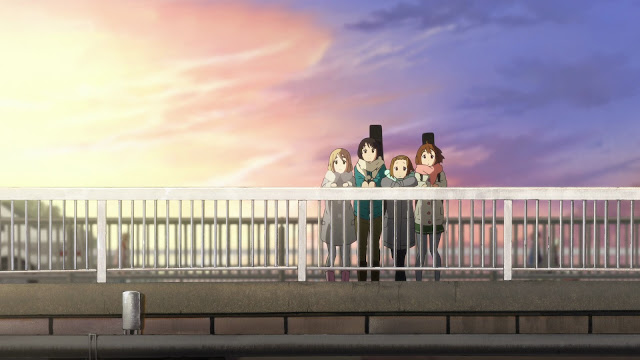 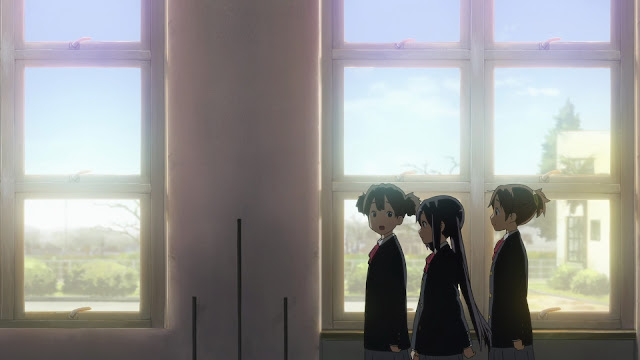 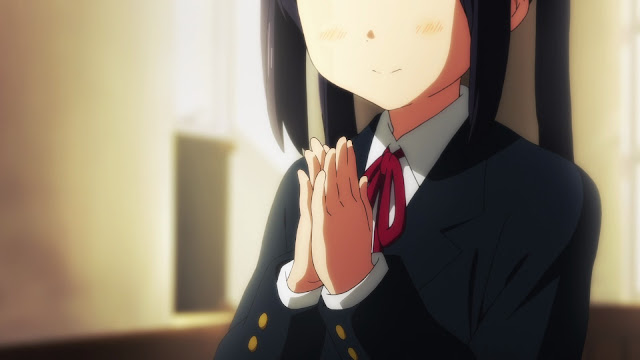 It should be quite clear that the movie has retained all of its entertainment value even a year after its release; while the movie has sentimental value from my end (i.e. I watched it so closely to the MCAT), there are aspects that definitely make the movie worth watching. A year may have elapsed, but the movie remains as fun to watch as ever, whether it be the miscommunications caused by the girls’ minimal English understanding, the adventures they have in the Streets of London or the performances they put on wherever they go. I’m not certain whether or not there will be another K-On! manga or adaptation after the movie, and as such, future posts about K-On! will become fewer. However, future adaptations will be greatly anticipated. For the present, however, I am content to set aside the K-On! franchise and stand by my assertion that the series ends on a high note.