The Nishizumi Style, or better yet, The Road to Ruin

“Your compassion is a weakness your enemies will not share.” ” That’s why it’s so important. It separates us from them.” -Henri Ducard and Bruce Wayne, Batman Begins

A few nights ago, the full moon was out, illuminating the yard in an ethereal blue light. I was having trouble sleeping, and decided that I would relax with a little bit of reading before attempting to retire for the evening. I scanned my shelves and came across a copy of Sun Tzu’s The Art of War. My inclination was to revisit some of the principles that had previously helped guide me through challenges at university and life in general, recalling several key phrases that I constantly cite as my favourite quotes from The Art of War. When I set the book down half an hour later, I realised that The Art of War would find applicability in at least one other place, albeit one where there’d be little relevance to the real world, and as I drifted off, my mind began drafting this post, where I intend to discuss in some detail the Nishizumi Style and in particular, how its paradigms contradict those written by Sun Tzu two thousand years ago. 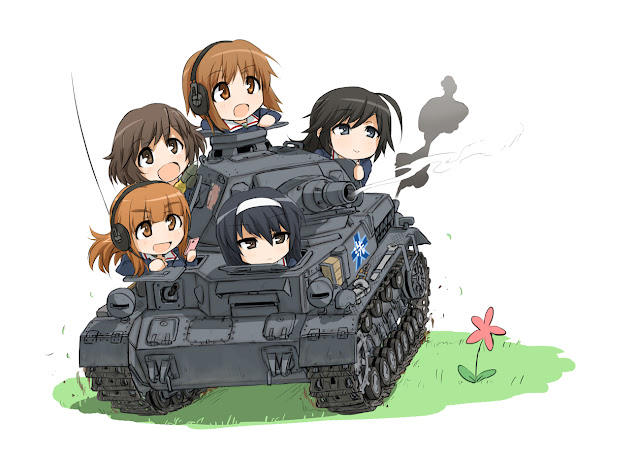 Specifics about the Nishizumi Style are only hinted at in the Girls und Panzer anime; one would need to read through Girls und Panzer: Little Army to gain a more definitive understanding of the Nishizumi Style, although this is in itself a reasonably straightforward endeavor. Simply put, Shiho Nishizumi states that the Nishizumi Style emphasises: “victory and strength, advancing without hindrance by emotions, and achieving victory without fail.” (C7.P23) In other words, this doctrine assumes that one needs to be superior in numbers and equipment; where this assumption holds, the goal is victory at any cost. There are moral implications to this particular school of thought, but that would fill several books and therefore is outside the scope of this decision. During the course of my readings, I came across two passages that illustrate the shortcomings of the Nishizumi Style: Sun Tzu himself said that “he who is strong everywhere will be weak everywhere”. That is to say, a doctrine that is driven by strength will naturally be weak, ergo making it susceptible to failure. Of course, those who’ve seen the Girls und Panzer anime will concur to some extent when I claim that Miho’s Panzerfahren is successful because it is consistent with Sun Tzu’s writings. In particular, I will make use of Black Forest’s performance in the anime to draw the comparisons between the Nishizumi Style and Miho’s own approach: the former contradicts virtually everything in The Art of War, while Miho best demonstrates how to correctly utilise weakness, strength, position and disposition. It is therefore unsurprising that Ooarai continues to put up excellent fights against technically superior opponents. 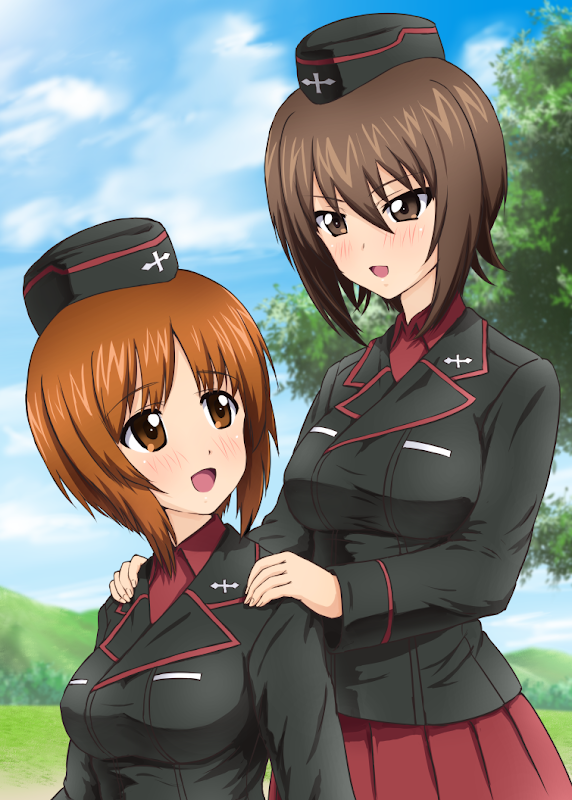 The Nishizumi Style fails to satisfy any of these criteria. Because it so strictly advocates moving forward, practitioners of the Nishizumi Style lack any real understanding of when they may need to make a tactical retreat, instead, pushing themselves forward by virtue of superior numbers and firepower with the expectation that they will be successful. The second point is directly tied to the first: Sun Tzu notes that being aware of the enemy’s numbers is useful, and capitalising on those numbers is what will allow victory. The smaller army should carefully assess the larger army’s movement to pick the best positions to attack, or should the need arise, retreat and fight another time under more favourable conditions. A larger army should intimidate the smaller army and wear down its morale before firing any shots. The Nishizumi Style completely ignores this aspect: during Black Forest’s fight against Ooarai, they immediately set up an ambush, but Miho’s knowledge of Maho’s techniques means that her forces do not lose their resolve to the extent required for Black Forest to achieve a victory. Thus, Ooarai is permitted one key advantage, despite its inferior numbers and weapons, leading to the third point. Miho is well-established as a capable leader, not so much for her forcefulness, but for the care she shows all of her crew. At another point in The Art of War, Sun Tzu mentions that a capable commander punishes and rewards his subordinates appropriately such that they respect him without hating him. Miho’s compassion for each and every one of her teammates forges the bonds that motivate them to follow her orders and trust her completely. By comparison, it appears that Maho’s teammates arrive at the battlefield and seek victory under the assumption that Maho will lead them to it (yet another flaw). Ooarai is unified in hearts and minds, out of both respect for Miho, and the threat of their school closing. Sun Tzu’s fourth point, preparedness, is again ignored by the Nishizumi Style. As strange as it seems, it becomes apparent that Ooarai is has Black Forest by the nose for much of the battle’s opening phases, leading them up a hill and taking the high ground: instead of preventing threats, Black Forest is reacting to them. In doing so, they lose the initiative. Sun Tzu notes that: “…he who arrives later will make war in haste and be weary.” Granted, Black Forest gradually gains the upper hand by virtue of having a Maus and drawing out the battle using their numbers to deplete Ooarai’s forces, but this battle illustrates just how critical adaptability is. Sun Tzu’s last point, conerning minimal interference from the soverign, is perhaps an afterthought where the Nishizumi Style is concerned. Practitioners of the Nishizumi Style must follow it completely, and in doing so, bind themselves to a rigid, unyielding style whose strength is also its weakness, whereas Miho, free of the need to conform, is able to find her own tactics. 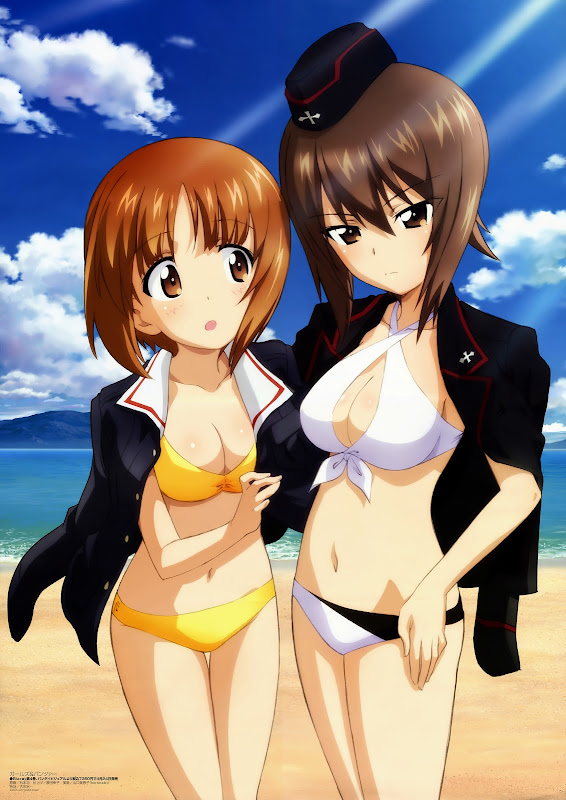 Sun Tzu Said: Having more soldiers in war does not give absolute superiority. Never advance recklessly by sheer force, but concentrate your troops through a correct assessment of the enemy’s deposition and you will defeat the enemy. He who lacks careful thought and strategy and underestimates the enemy will surely be captured by the opponent.

Contrasting this to the Nishizumi Style’s “advancing without hindrance by emotions”, we already note an immediate contradiction. Sun Tzu advocates carefully determining how the enemy organise themselves and their numbers, before deciding on where their weaknesses are, and striking at those weaknesses, such that the expenditure of resources and manpower is minimal relative to the results achieved. However, from what we’ve seen in Girls und Panzer, Black Forest (in keeping with the Nishizumi Style) prefer to overwhelm their opponents with superior firepower and numbers. Until they challenged Ooarai, this approach worked, but a constant advance is not sufficient where an opponent is aware of their enemy’s advantages. Maho does order her tanks not to pursue recklessly at one point, instead, requiring her units to regroup before maintaining pursuit. Throughout the course of their battle, Maho keeps her operational tanks together as a large group, bypassing the classic “Divide and Conquer” strategy that would otherwise be afforded by their superior numbers. Assuming that their superior weapons would defeat Ooarai, Black Forest fails to anticipate the guerrilla tactics Miho employs and is thrown into disarray. This alone is sufficient to undermine their morale. Quite honestly, I was originally expecting impressive strategies from Maho during the finale prior to their release, but by this stage, it is hardly surprising that Black Forest’s techniques appear unimpressive and in some cases, even foolish. In retrospect, it appears that in-universe, the Nishizumi Style is respected for its reckless force, and that few schools appear prepared to take on such an opponent head on; even when confronted with a numerically and technically equal enemy, the Nishizumi style would likely continue advancing, regardless of the casualties they sustain to non-essential (i.e. any tank that is not the flag tank) forces. This grim determination would portray to the opponent that they are going up against a force that is hellbent on advance, without any concern for their own safety. Such attitudes have proven highly effective at intimidating the enemy in history, and against high school girls, would be sufficiently frightening as to demoralise them, depriving them of the will to fight. Advancing quickly would ensure that the other tank crews lose composure even if the commander remains collected, preventing them from rallying the team. This would account for why other schools who have faced Black Forest thus far have fallen. Conversely, when faced with strategies that follow Sun Tzu’s writings more carefully, it is obvious that brute force alone falls to precision and determination. 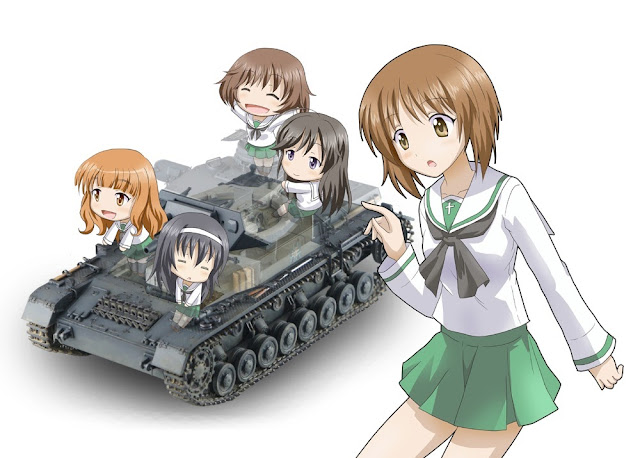 For brevity’s sake, the discussion will wrap up shortly: after all, this is a blog, and not a 6000-word paper I’ll need to turn in for a class. In summary, throughout the course of the anime and through the Little Army manga, viewers are exposed to the Shiho’s beliefs in the Nishizumi Style and its accompanying flaws. There have been some suggestions that Girls und Panzer is a deliberate attempt to drive home the point that sportsmanship and fun are more relevant than some barbaric, bizarre adherence to “honour”. However, there are some who have insisted that the Nishizumi Style is appropriate. I have only given two points here, but perhaps it is saying something when only two points are already sufficient to demonstrate the weaknesses of the Nishizumi Style. I certainly don’t carry out my academics or martial arts with the “victory at all costs” mindset, and would in fact view a refusal to back down from such an aggressive position as sociopathic and counterproductive. In closing, I remark that Sun Tzu’s The Art of War has been around for a little more than two thousand years, and the fact that its writings remain effective even to this day bear testament to how knowledge, adaptability and understanding are central elements towards achieving victory.

2 responses to “The Nishizumi Style, or better yet, The Road to Ruin”