3 Comments Posted by infinitezenith on August 4, 2013

“You either die a hero or you live long enough to see yourself become the villain.” -Harvey Dent

Before we begin, I’ll refer to Puella Magi Madoka Magica (Mahou Shoujo Madoka Magica in Japan; literally “Magical Girl Madoka of the Magnus”) as Madoka Magica for brevity. Madoka Magica seems as far removed from the realm of anime that I may typically watch. However, closer inspection finds that Madoka Magica is immensely enjoyable; armed with a compelling story, visuals that might be more at home in a nightmare and music that evokes an aura of fear or wonder, Madoka Magica is built around Madoka Kaname’s life and how radically it changes once magic and miracles are introduced into her life. The series’ nature is not immediately apparent after the first few episodes: Madoka’s world appears cheerful and brightly coloured, and her life is filled with happiness. However, there are subtle hints that this world is superficial, whether it be the presence of sinister industrial complexes or distant skyscrapers, suggesting that appearances alone are an insufficient determinant of how things operate in their world. Moreover, when Mami shows up to lend Madoka and Sayaka a helping hand in the first episode, she plays her role as a magical girl with the hope and idealism as magical girls typically do. The sense of happiness and peace is thus, abruptly and immediately shattered when she is decapitated and consumed by a witch in front of Madoka and Sayaka, the monstrous entities that sew seeds of discord on Earth. The witches’ origins are likewise presented: Mami simply explains that they cause unexplained deaths and disappearances, which imparts on Madoka and Sayaka a black-and-white view (simply, the witches are evil, and the magical girls are good). Following Mami’s death, the atmosphere darkens considerably, as the source of the conflict is revealed. Kyubey explains to the girls that make the contract to become magical girls that emotion drives an unexplained energy source: neither the girls’ ally or enemy, he simply acts out of necessity, withholding information and resulting in much suffering from the girls’ end. There are, simply put, a lot of details in Madoka Magica, that breath complexity into the storyline: while it’s not exactly clear what’s going on at times, the chaotic and tumbling nature of the plot succeeds in drawing the viewer’s interest. When things are revealed with Homura’s story, suddenly, everything falls into place. There is too much to discuss concerning the plot in a single passage; for the present, I will say that very few anime can make a plot this compelling within a twelve-episode span and give it a story that is satisfying to watch in such a small time-frame. Madoka Magica capitalises on its length and makes the most of it to produce an interesting story that allows its viewers to keep up, without leaving them in the dust. 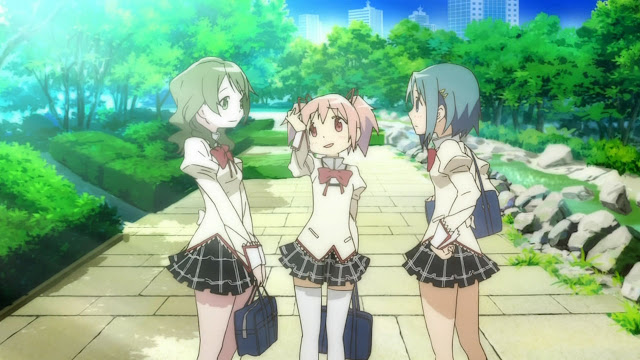 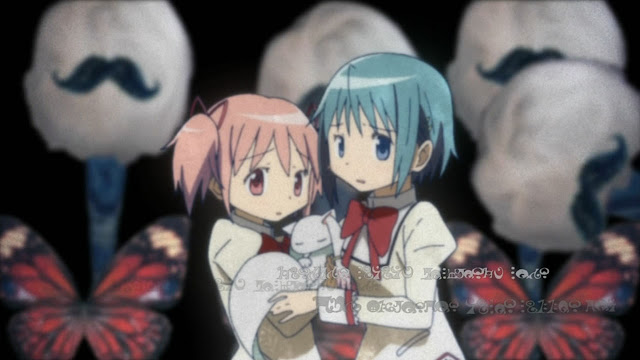 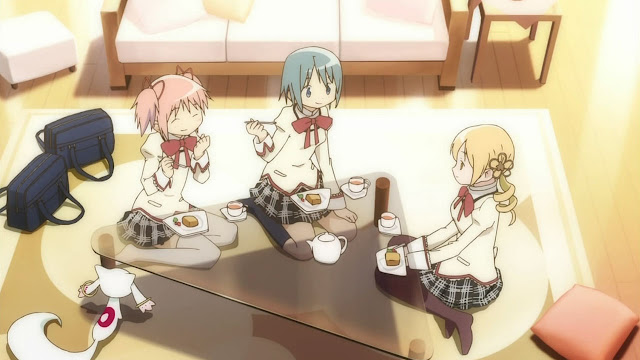 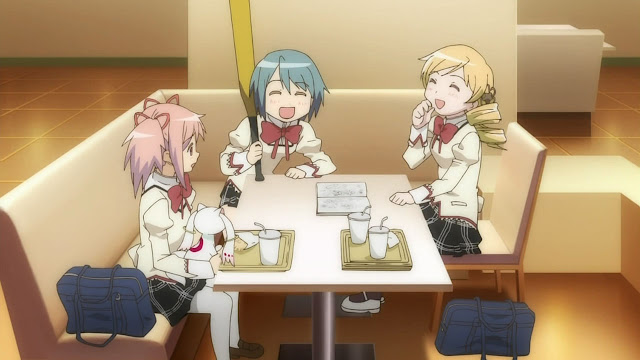 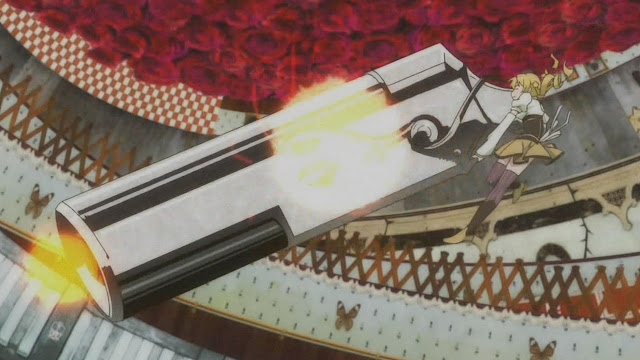 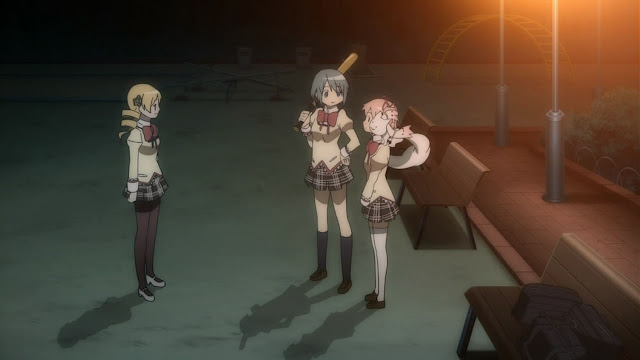 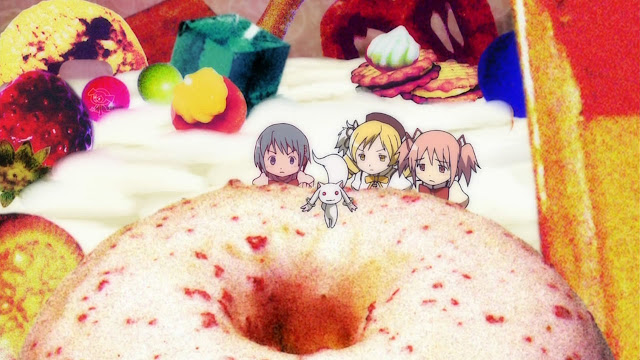 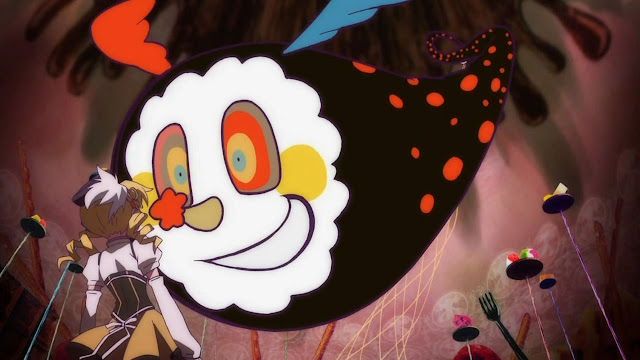 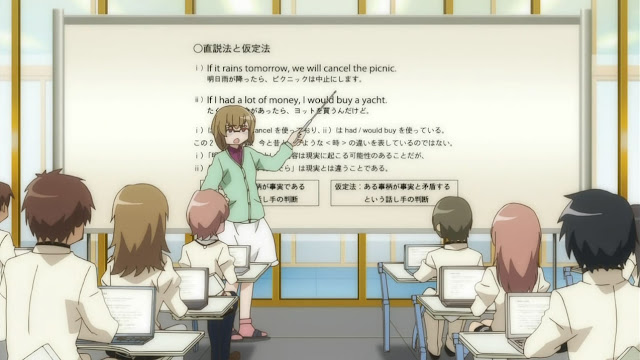 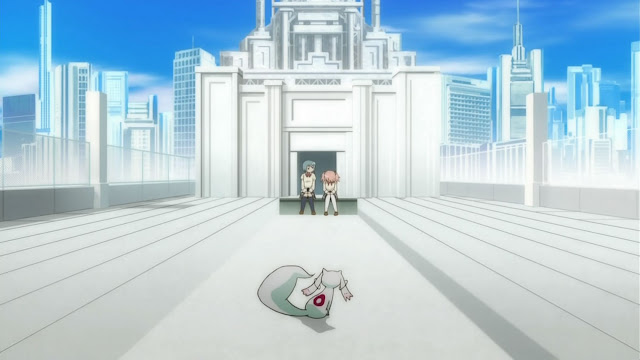 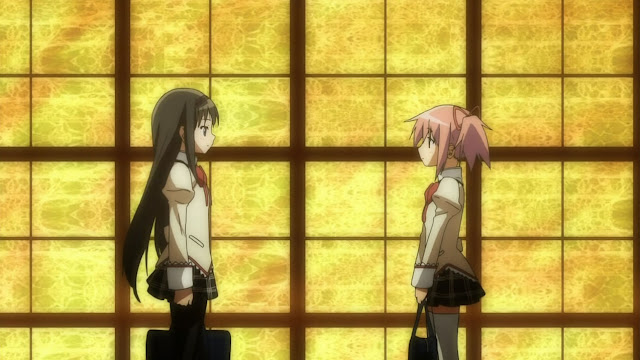 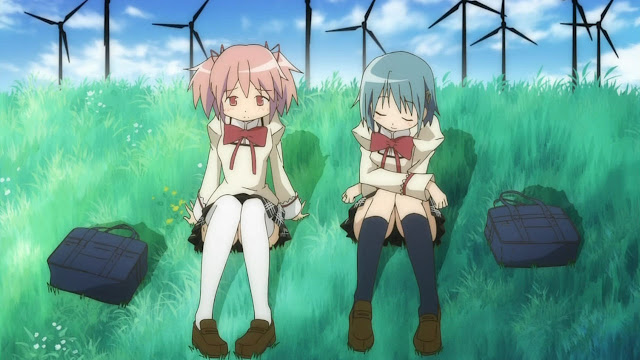 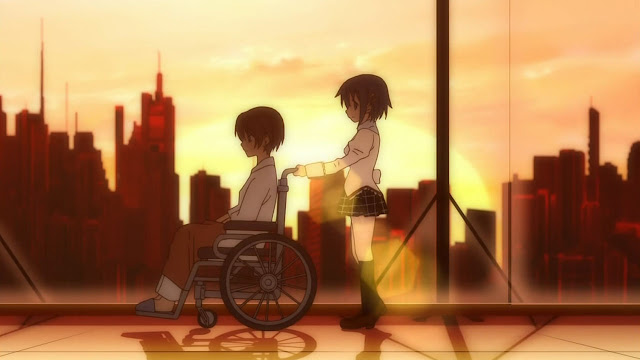 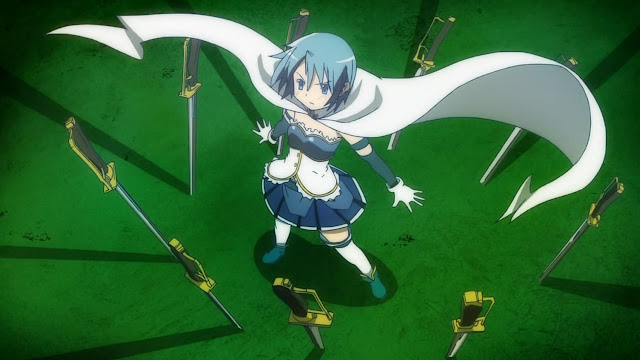 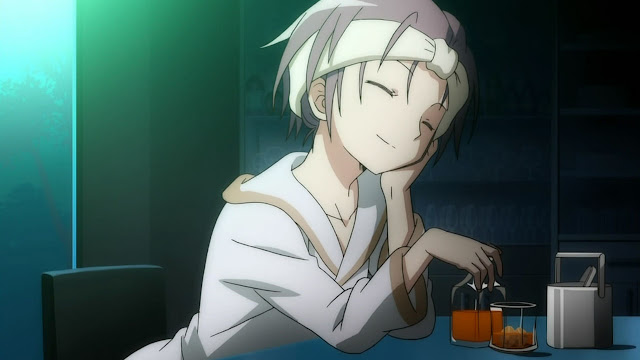 Contrasting almost all previous Mahou Shoujo anime, Madoka Magica does away with all of the idealism and optimism of other anime in its lineage, instead, approaching the Mahou Shoujo genre with a more gritty, realistic approach not dissimilar to Christopher Nolan’s Dark Knight Triology. Whereas the previous Batman installments were more whimsical, Nolan’s Dark Knight emphasises the human aspect of the superhero genre, illustrating that the Batman is not invulnerable (in both a physical and emotional sense). To raise an example, in The Dark Knight, it is not Batman, but Bruce Wayne (Christian Bale), who is impacted after Rachel Dawes’ (Maggie Gyllenhaal) death. Batman is a symbol, and magical girls are symbols representing hope, but taking up the role comes at an immense cost to those who choose to do so. Homura becomes a magical girl after Madoka is annihilated in a previous timeline, forcing herself to relive a time period to try and save her, despite repeated failures. Sayaka’s wish to restore Kyousuke’s capacity to play the violin eventually saps her of her resolve when she realises that her body is a shell; paired with her despair at losing Kyousuke to her friend, Hitomi, she becomes a witch herself. We draw the parallel with Harvey Dent’s (Aaron Eckhart) fall, where Dent turns to chaos as fair after Rachel is killed as a consequence of the Joker’s (Heath Ledger) machinations. The quote at the top of the page definitely captures that, as Kyubey reveals that specifically, magical girls becoming witches is precisely what provides his people with a power supply. This aspect is unexpected, raising the stakes in that all of the magical girls, the “good guys”, inevitably end up dying in combat or last long enough becomes witches. These distinctly human character means that the heroes remain believable, that they might be capable of the supernatural, but are nonetheless human. This turn to “realistic” heroes is a welcome one, and after Nolan’s reboot of the Batman continuity, it is quite welcome to see this approach being directed towards magical girl anime, a genre previously characterised by an overwhelmingly optimistic and sparkly design. 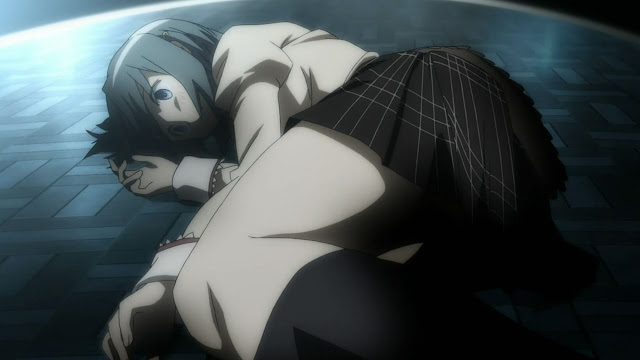 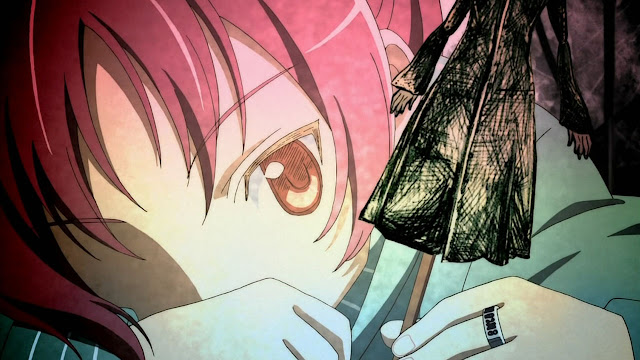 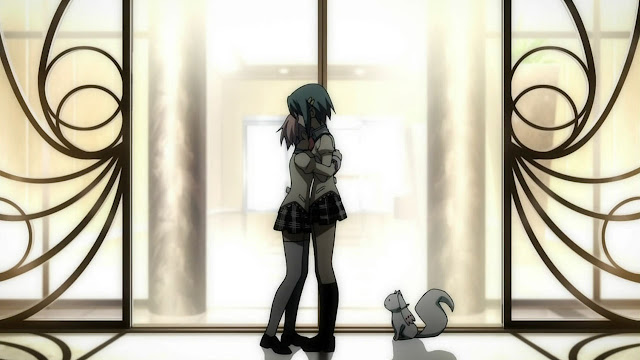 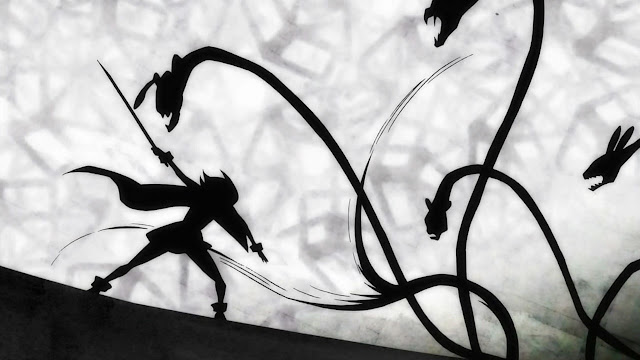 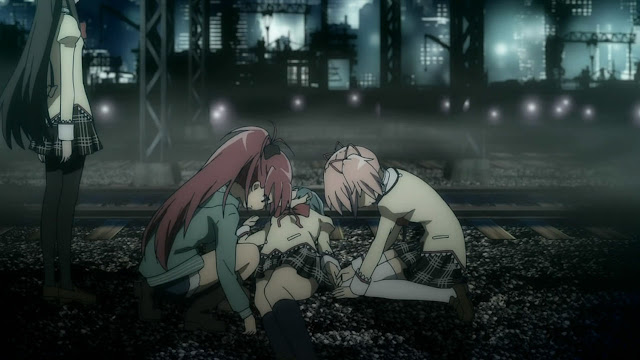 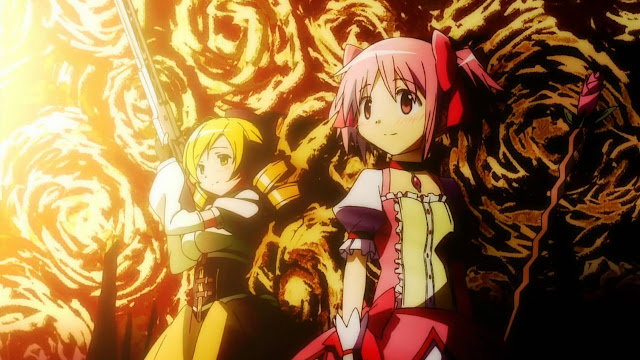 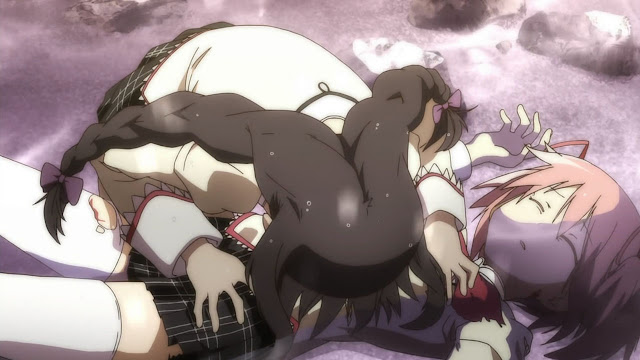 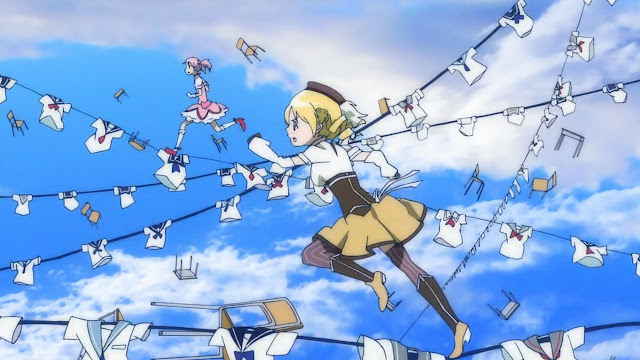 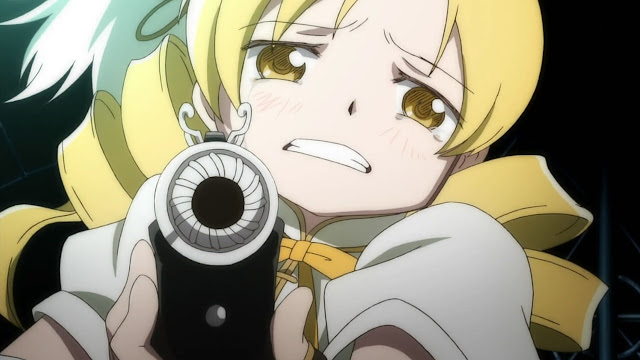 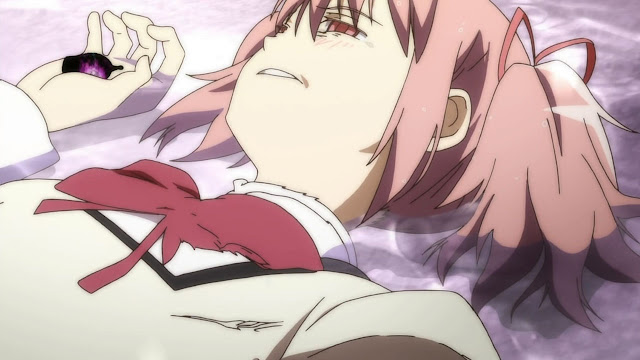 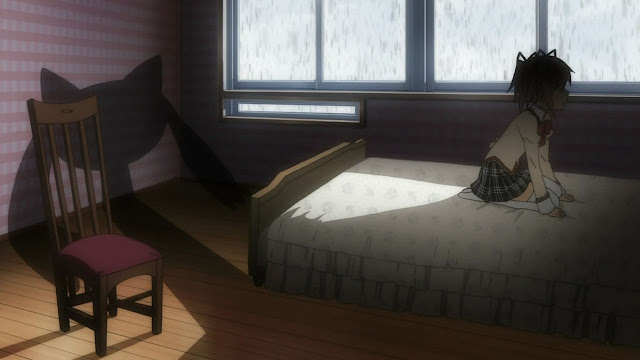 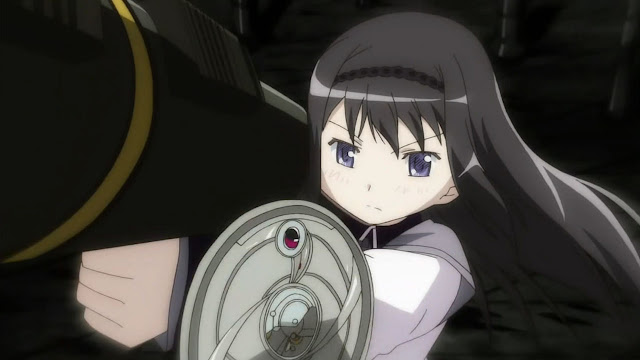 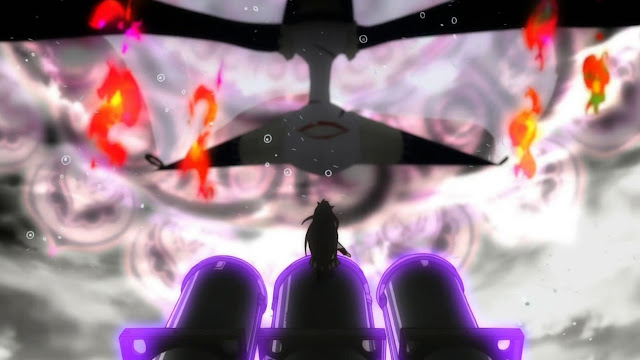 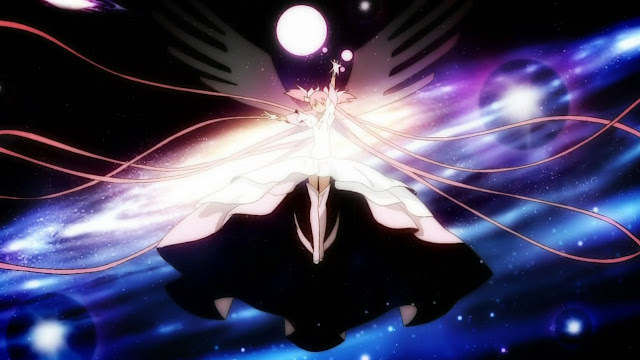 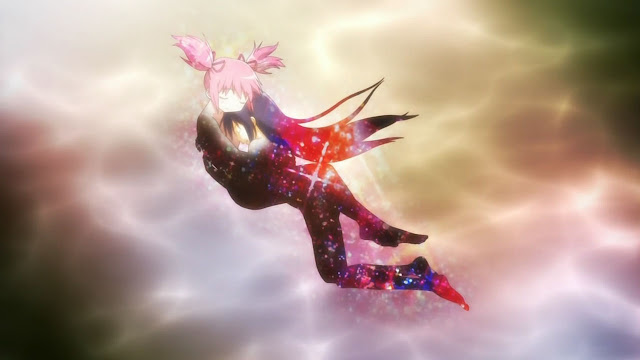 The last few episodes to Madoka Magica stretch things further, so I find it necessary to bring Char’s Counterattack to the table. For the unfamiliar, in Char’s Counterattack, Amuro Ray’s Nu Gundam produces a phenomenon called the Axis Shock as Amuro’s emotions and desperation to save Earth from collision with the Axis asteroid causes his Gundam’s psychoframe to resonate, pushing the asteroid back and causing both Amuro and Char Aznable to disappear. At the climax to Madoka Magica, Madoka disappears after defeating the Walpurgis Night to fulfill the parameters she outlined in her wish. This ending is not the traditional ‘happily ever after’ one we’ve come to expect from magical girl anime, reminding viewers that the world is unfair, and that sometimes, sacrifices are what is necessary to maintain balance. The mechanisms for Madoka’s capacity to make such a wish are neatly explained in Homura’s back-story, setting things up nicely for the finale and tying together loose ends from the beginning of the anime. A solid, moving story, coupled with characters that are as human as I’ve seen, meant that every episode managed to give me the chills at some point. I’ve heard that some anime reviewers were moved to tears by some of the things they’ve seen in this anime, and I understand why. When everything is said and done, we have here a magical girl anime that is serious and realistic: things don’t magically resolve themselves at the end of the day, and people who strive towards an ideal may find disappointment in the fact that their efforts alone may not be fruitful. These elements contribute to my final verdict: Puella Magi Madoka Magica has elements that make it suited for almost anyone’s interests.