The Meaning of “Speculah” in Sora no Woto

6 Comments Posted by infinitezenith on October 6, 2013

“Time destroys the speculation of men, but it confirms nature.” —Marcus Tullius Cicero

Sora no Woto is an anime production from the Anime no Chikara initiative, which sought to produce unique, novel anime that had no source manga. The project only led to three anime being produced before being scrapped, and in particular, Sora no Woto was one anime that was crafted with such an attention to detail that speculation surrounding the anime continued even after the anime had finished airing. In fact, so prevalent is the speculation that Sora no Woto fans propagated a new meme, “speculah”, to refer to all of the different speculations about the series. The term “speculah” is probably more widely used with Puella Magi Madoka Magica, referring to speculation originating from the fans. However, it has its origins in Sora no Woto, and while the exact nature of the propagation from Sora no Woto to Puella Magi Madoka Magica is not clear, my conjecture is that English-speaking Sora no Woto fans imported its usage to Puella Magi Madoka Magica, and because the latter is more well-known compared to Sora no Woto, its usage has since remain associated with it. With that in mind, the term “speculah” nonetheless remains irking to read, and so, my curiosity led me to track down the origins of this term. Naturally, there is no single source that provides a satisfactory definition. While Sora no Woto is clearly not K-On! in a military setting, the superficial character resemblance between the two series, specifically, the fact that both protagonists have a signature instrument (Yui Hirasawa’s guitar and Kanata Sorami’s trumpet) led a small number of fans to term Kanata’s trumpet “trumpetah” in an ill-mannered attempt to recall Yui’s Guitah. Phonetically, “Guitah” makes sense and is appropriate for K-On!, whereas “trumpetah” merely sounds absurd. These fans subsequently began appending the suffix “-ah” to everything they used, resulting in the portmanteau “Speculah”, composed of “Speculation” and “Gitah”. This is not an unreasonable estimate of how the term came about. 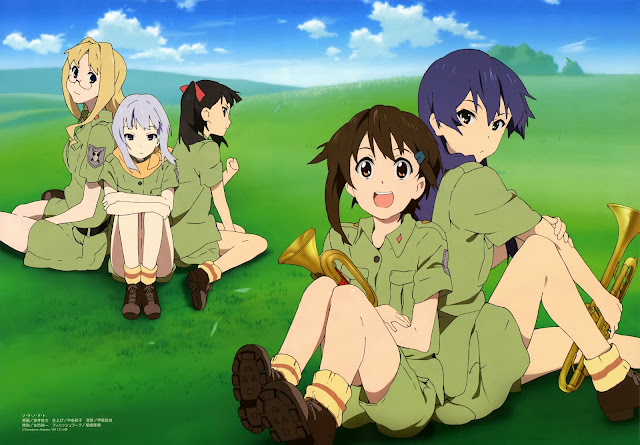 Just how prevalent is the term “speculah”? The answer may be quite surprising; the truth is that it’s actually quite infrequent with respect to usage. Aside from the Sora no Woto Wikia, where members have compiled detailed but crude posters of their speculations, the term is virtually unheard of elsewhere. This observation suggests that the user base at the Sora no Woto Wikia was likely a group of individuals who have real-world, or at the minimum, steady online communications and were thus able to coordinate the creation of their posters. While their intentions remain pure guesswork at this stage, it is not unreasonable to suppose that Sora no Woto Wikia’s community was intending to encourage the notion that their interpretation of the series was the only correct one and promoted their ideas to gain respect in the anime community, even going so far as to try and turn “Speculah” into a meme. To this end, they have created special “Speculah” charts to remind viewers that their efforts and organisations imply that their views are necessarily true. The charts, however detailed they were, are crude, inconsistent and unprofessional, making them very difficult to read. This formed the rationale for my project: to completely revise all of the charts into a clean, informative and readable form. I have done away with the original charts’ inconsistent information, unintuitive formatting and incompetent grammar, providing a series of new charts that are structured and formatted for ease-of-reading. The charts can be found below, and naturally, can be expanded for viewing at their full resolutions.

The project has taken roughly 25 hours over a month-and-a-half period, and the effort that went into the project’s undertaking is obvious in the new posters. Every single issue and problem with the original posters have been addressed and rectified here. There is no more Comic Sans font, poor grammar or unprofessional comments. In addition, irrelevant asides and forced memes have been completely removed: the new charts are concise, focused and professional. The original chart’s creators included personal opinions in their charts, passing them off as fact: those have likewise been displaced. Aside from being wrong, it’s also not relevant to what the reader was looking for. With polish, a clean design and readable passages, these posters are intended to serve as the new reference for Sora no Woto that fans and readers alike deserve.

6 responses to “The Meaning of “Speculah” in Sora no Woto”