Mobile Suit Gundam 00 A Wakening of the Trailblazer: Final Impressions

A Wakening of the Trailblazer is the first original feature-length film to be released for the Gundam franchise in over 19 years. at the time, this was my first experience with anime movies and as such, at the time, I wasn’t sure what to expect of the movie. The experience would prove to be a curious one: whereas most anime movies release on BD/DVD around six months after their theatrical release, A Wakening of the Trailblazer went to BD/DVD a mere three months after its original release. The movie was not disappointing, impressing audiences with its breathtaking visuals and intense combat. Three years after I drafted my review, I decided to port the original article over to this blog: when published back at the old website, this was the only review online to have a substantial number of screenshots, and as such, every day, readers linked to that article to point out a solid discussion with plenty of high-resolution screenshots. At its peak, the post alone drew in a thousand unique visitors each day, and on AnimeSuki, was praised for being a “very nice and in-depth summary…better than the one on Gundam Wiki”, as well as for its diverse, high-quality screenshot collection. At present day, interest in A Wakening of the Trailblazer has waned almost completely, but nonetheless, for accessibility reasons, I’ve decided to port the article here so it’s easier to find. I’ve largely retained most of the content from the original review and have gone back to make minor grammatical corrections, but other than that, the reflection is mostly intact and true to its original form, bearing hallmarks of my writing style from three years ago. 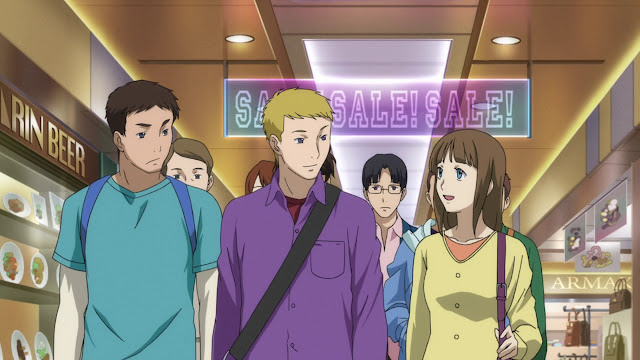 My overall impressions of the movie were largely positive: the introduction of extraterrestrials into the universe represents the first time anyone has done so in the franchise. With no yard stick to make a reference to, the movie is literally trailblazing into new grounds. The immediate impression of the plot is one that is solidly crafted; while execution could be a little smoother, it nonetheless flows very well. In essence, the movie is about the appearance of aliens, and humanity’s fight for survival. This sounds similar to the dozens of other movies out there about aliens invading, but the reality is dramatically different. The extraterrestrials are metallic shapeshifting beings that bear absolutely no resemblance to humans whatsoever; this is a highly realistic depiction of how intelligent life can develop from completely different environments with a completely different biological constitution. Through the portrayal of the extraterrestrials, it becomes clear of how much though went into the movie. Thus, we come to the question of how this movie about aliens is any different than most existing media about aliens. Films like Independence Day and War of the Worlds present the extraterrestrials as beings with technological superiority, and regard the human presence on Earth as humans regard lesser organisms. This sets us up for a climatic battle in which humanity somehow wipes the floor of an alien fleet using heat seeking missiles and tank shells (in the case of Independence Day), or sometimes, the aliens disagree with our micro-fauna (War of the Worlds). There’s nothing wrong with this, and in fact, Independence Day was an excellent film. The main point here is the contrast between the two films; in A Wakening of the Trailblazer, the plot is more concerned with understanding the ELS and their intentions, a theme which we have seen recurring since Setsuna became an Innovator. 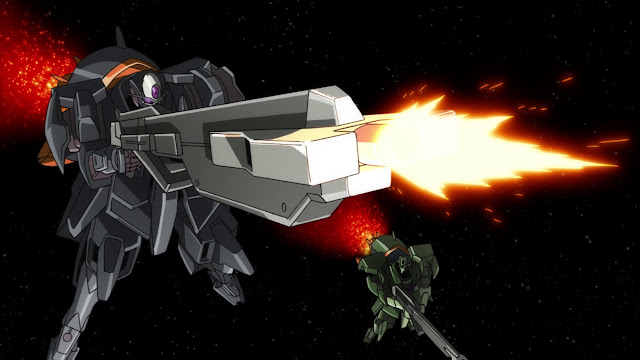 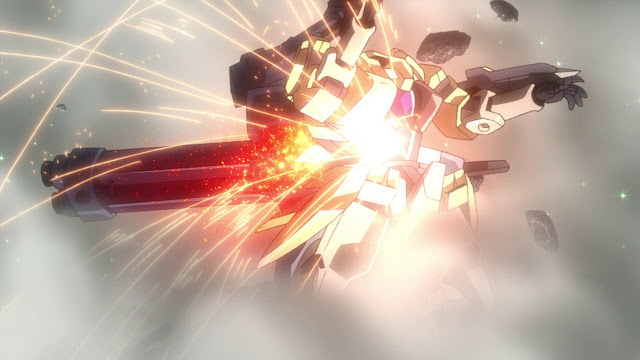 In A Wakening of the Trailblazer, plot execution is consistent but is also a little rough at times, and events may be difficult to follow outright at certain points in the film. Things start slowly, punctuated by the occasional combat sequences, but focus on developing the background for the movie. We see the defecation hit the oscillation once Descartes Shaman wipes out the derelict space station, and afterwards, the movie takes on a horror-like tone as unusual phenomenon begin occurring. It is not until the appearance of the ELS Ribbons that we know things are truly starting to escalate. After this point, the pace of the story picks up and accelerates: the remainder of the movie becomes an exhilarating ride that remains with the viewer right up until the credits. This manner makes the first portion of the movie a little less exciting than usual, although I feel that this isn’t too unusual for a movie of this type (for instance, War of the Worlds is mostly about running from the aliens until the scene at the farmer’s house). When the ELS replicate the derelict space station, the pace dramatically rises from there; each battle after this one pushes the intensity further than the previous one, almost as if the producers were deliberately trying to surpass the ferocity of the previous battles. At the end of the movie, the epilogue comes as a refreshing moment to viewers- after all that non-stop action, it is relaxing to take in what the world has become since the ELS appeared. The ending sequence is set after the credits, and ends on a highly optimistic note. 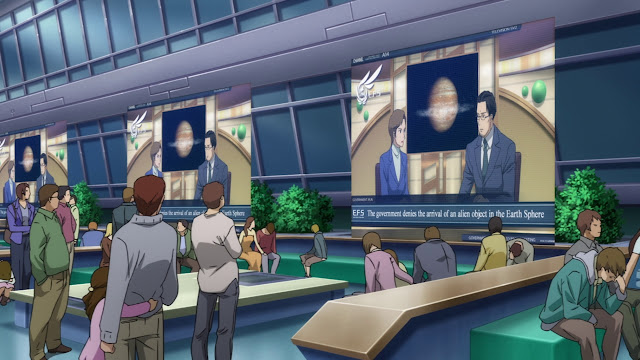 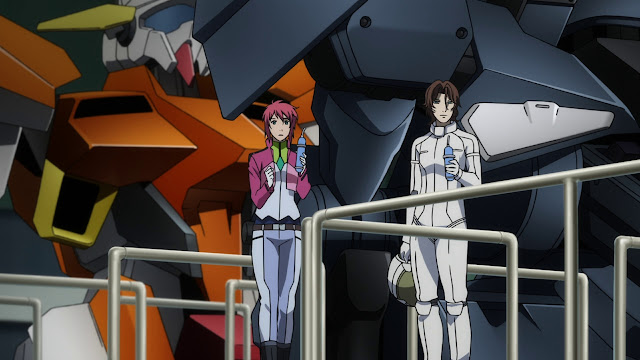 From a character growth perspective, each of the main characters have expanded roles suited for the story. There are a few notable aspects I particularly found enjoyable. The reintroduction of Graham Aker as a protagonist was simply glorious; no longer obsessed with surpassing Asura, he is now a mature commander who bravely leads his soliders into battle. Graham brings the Sol Braves in to save the Meisters on their first appearance. Saji may be a civilian again, but he is a lot more decisive now. When the ELS Ribbons appears and makes a move towards Louise, he responds by throwing a chair at Ribbons, and goes to assist the effort against the ELS in his way by helping out with the maintenance of the orbital elevators. This action shows us that he fully understands that fighting does not necessarily mean picking up a weapon and pointing it at someone’s head, and that each action contributes to a cause. The newly introduced characters see little development with respect to their backgrounds, although each character has had their share of distinct and memorable elements in the movie. Descartes Shaman’s initial appearance in the trailer led many to assume he’d be the new antagonist, but he is merely a pure innovator who happens to be a pilot for the ESF. Meena Carmine is the “girl who looks like Nena and clings to Billy like static makes wool cling to a cotton shirt”. Amia Lee will be remembered by everyone as “that girl who got picked up by the ELS”. Finally, all those ESF commanders we see are simply there; I’m sure people don’t mind that, given that nameless commanders are present in every other science fiction film out there. Despite receiving minor development, each of the aforementioned individuals contributed to the story. I’m certain many have heard that there are no small roles, only small actors, something that definitely applies to A Wakening of the Trailblazer. 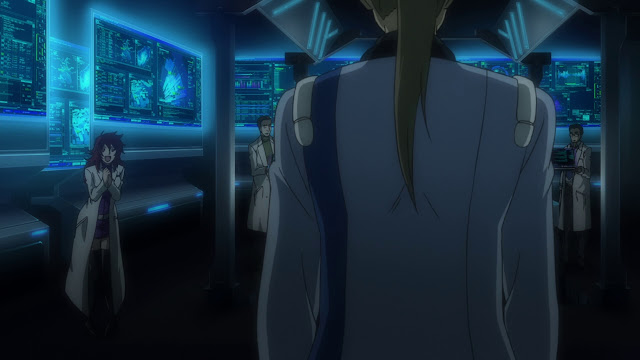 Meena is a minor character, but that doesn’t change the fact that her interactions with Billy are hilarious. 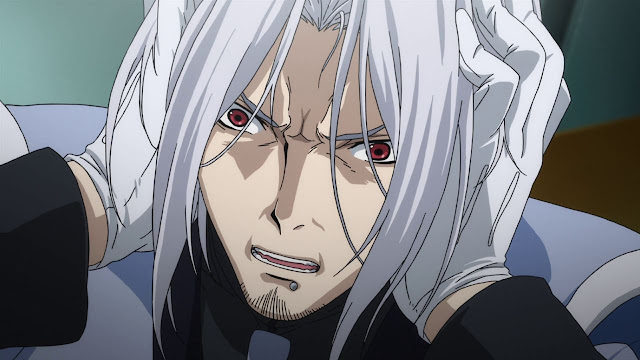 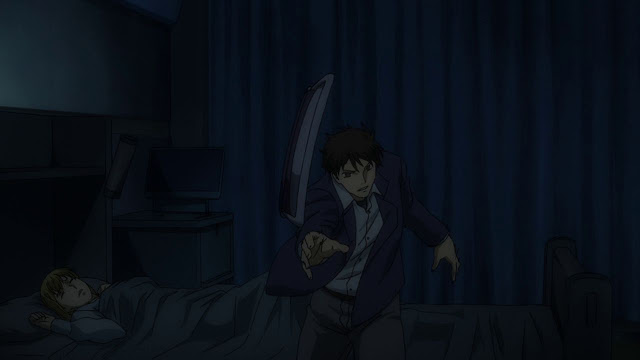 Seiji Mizushima continues working his magic to ensure that the animation quality in the Anno Domini universe is top-of-the-line. When it was released in 2007, Gundam 00 was the first anime to ever be animated in HD. The visuals were incredibly detailed, and set the standard for all anime to come. It comes as no surprise that Awakening of the Trailblazer raises the bar further, only this time, it is in the form of subtle details. Whether it is watching the ELS assimilate a Federation Cruiser or the displays the characters are viewing, every detail is masterfully attended to. Of particular note were the behavior of the ELS Swarms. I understand the complexity involved in building computer models of swarm-based systems, and animating such systems cannot be any easier; when we see the quantities of ELS on screen, we cannot help but be blown away. Their assimilation of whatever they contact is also masterfully portrayed; ranging from behaving like sucrose crystal growth to virulent liquid mercury, the ELS have the appearance of solid metal, but distinctly feel organic when they begin to assimilate their victims en masse. It is the attention to these kinds of details that make the movie worthwhile, and even viewing the movie in 480p, there is little doubt that the quality of the art is astounding. For those doubting me, my images are 720p images condensed into a width of 640 pixels for the sake of convienience. We move from this topic to execution of all the combat scenes. There is no surprise that the battle sequences are what define a Gundam series, separating an excellent series from a good one. In the case of Awakening of the Trailblazer, no words can really describe the action we see on screen whenever a faction sorties. The sheer scope and intensity of the battles give testament to just what humanity is up against, and at times, it feels like I am piloting a mobile suit alongside the characters in the movie. 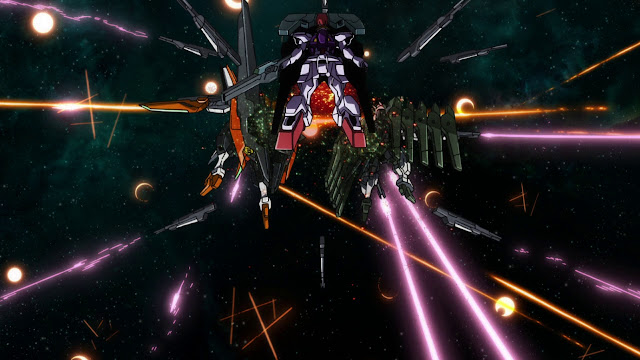 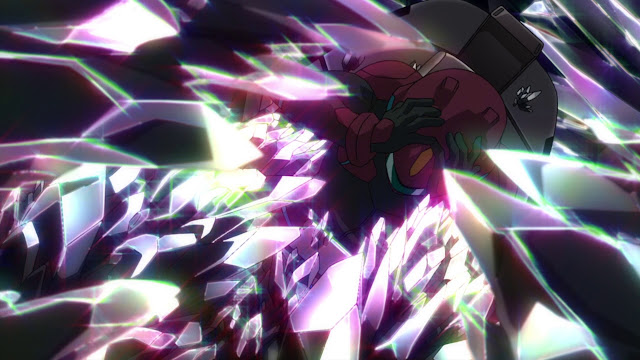 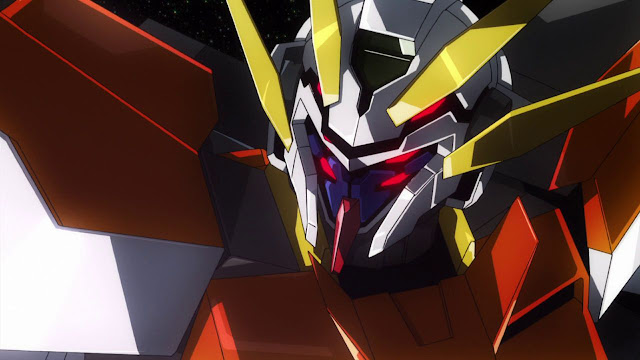 My lasting impression of the movie is one that is very well done, but not quite a masterpiece; Seiji Mizushima’s decision to trail-blaze and introduce aliens into the Gundam franchise was very smooth and reasonably portrayed (not all the aliens we may meet will be bipedal vertebrae). Animation and attention to details are of a high grade, making every scene visually pleasing. There are some shortcomings in the movie, especially with respect to execution of the plot. Those who are seeking a emotional journey for the Feldt’s unrequited love will not find anything remotely to the same level as Five Centimeters per Second, but for everyone else looking at the battle sequences, I doubt viewers will be disappointed. Although those new to the Gundam 00 franchise may find themselves lost as events unfold early on in the movie, A Wakening of the Trailblazer is definitely worthwhile for existing Gundam 00 fans, representing a bold new direction in the Gundam franchise. 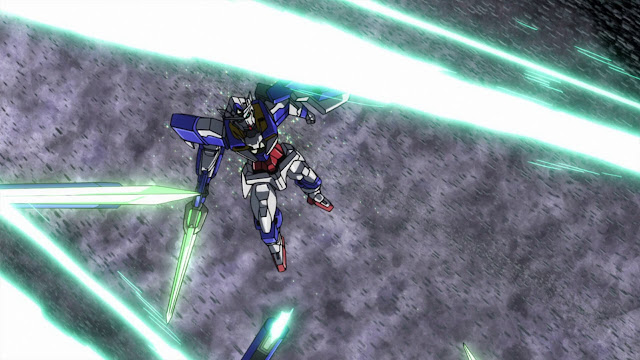