2 Comments Posted by infinitezenith on January 18, 2014

A month ago, the official SOS Brigade page displayed an error message, saying that the page could not be found. Of course, knowing that December 18 is significant in The Disappearance of Suzumiya Haruhi, I decided to run some rudimentary tests and sure enough, found that the error message was concealing a link that led to news that there is an anime adaptation of The Disappearance of Nagato Yuki-chan presently in production. The original manga was a spin-off of the Haruhi series and is presently being handled by Puyo: back in June 2013, I expressed interest in seeing this series obtaining an anime adaptation. The manga had captured my heart, presenting the slow-paced relationship between Kyon and Yuki, pushed on by Ryoko Asakura, Yuki’s best friend. By stripping away all of the supernatural and Haruhi’s overwhelming presence, The Disappearance of Nagato Yuki-chan ends up being presenting a peaceful, almost nostalgic atmosphere. Invariably, it ended up using all of the cliches common to a typical high school romance, but the dialogue suggests this was deliberate. The end product is something that leaves me with a longing feeling towards all things related to the heart, and as such, if a TV series was to be made, I resolved to watch it without further questions. 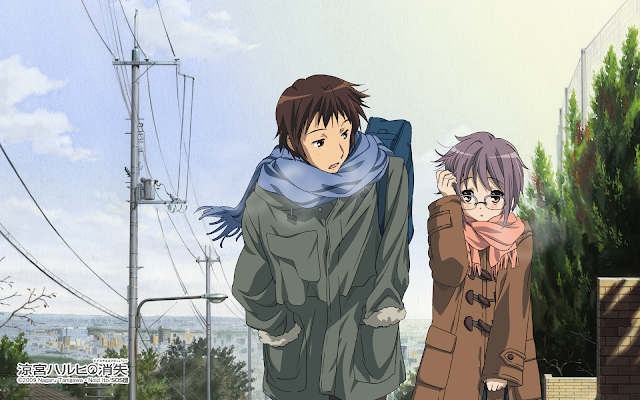 Why did I wait a month to post my own thoughts on the news? The answer is simple enough: the fifth volume to The Disappearance of Nagato Yuki-chan manga is set for release on February 18, 2014, exactly a month from today. However, unlike the manga, the anime adaptation does not have a definitive release date. One site claims that The Disappearance of Nagato Yuki-chan could release as early as April 2014. There is a credibility problem with that site, though, as they refer to Japanese image-boards for information. Experience has shown that these sources are oftentimes no more than speculation. Of course, my speculation is based on reasonable estimates; I predict that The Disappearance of Nagato Yuki-chan will release somewhere between April 2015 and April 2016, with Fall 2015 being a possibility, as well. These values are based on the fact that The Melancholy of Suzumiya Haruhi released during the Spring season in previous years. Discussions elsewhere turned to which organisation would be animating this anime adaptation: contrary to what one might expect, I have no particularly strong opinion about which studio will handle the animation process, although I would like KyoAni to pick it up again simply because of their superb execution for the movie. My only expectation is that the animators capture the spirit of the manga and portray the The Disappearance of Suzumiya Haruhi universe as a warm and friendly environment as effectively as the manga has. Other than that, all remaining elements will be left to speculation. However, the one definitive point is that I will definitely follow this series through from start to finish and write about it in my typical manner, as this represents the first time that I’ve been caught up in a manga before starting an anime adaptation.

2 responses to “The Disappearance of Nagato Yuki-chan Anime Announced”