2 Comments Posted by infinitezenith on May 2, 2014

This is the greatest anti-socialising of all time.

A year ago, I mentioned that Yahari Ore no Seishun Rabu Kome wa Machigatteiru (“My youth romantic comedy is wrong as I expected”, referred to as OreGairu for brevity from here on out) was on the list of things I would watch for Spring 2013, although for one reason or another, I kept putting it off until it was nearly a year later. The focus is on one Hikigaya Hachiman, a high school student with a distorted view on life and no friends or girlfriend. Out of concern for his well being, his instructor, Shizuka Hiratsuka, gets Hikigaya to join the Volunteer club, which happens to have the school’s prettiest girl, Yukino Yukinoshita. So begins a rather unusual, but excellent series about high school life from an unusual perspective. When the series concluded, I saw a series that was able to portray the kind of interactions and sociology surrounding high school students, as well as Hachiman’s dogged persistence in following his own beliefs, even if it came at a severe cost to himself. While it may be an anime, various aspects from adolescent sociology make it into OreGairu, whether it be status-building or conformity: Hachiman views these as farces, believing that youth is an illusion people create to give their lives more meaning even where there is none. Throughout the series, as Hikigaya is assigned to help various people, even though he maintains his original beliefs, he becomes closer to Yukino and Yui Yuigahama, and despite his beliefs about change, gradually changes himself and gaining a better understanding of cooperation and friendship. 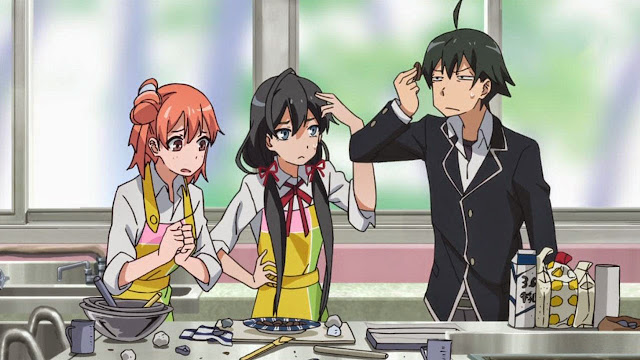 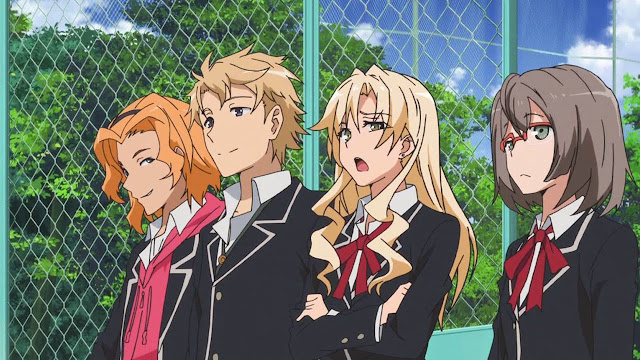 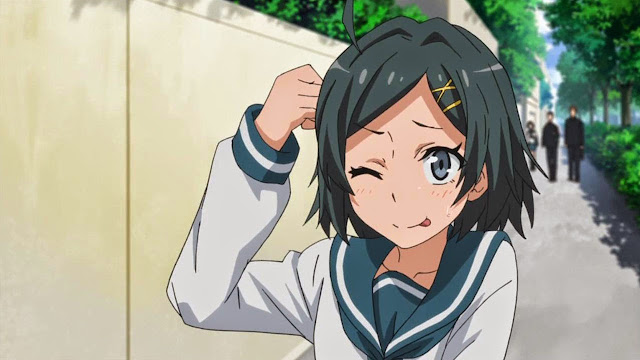 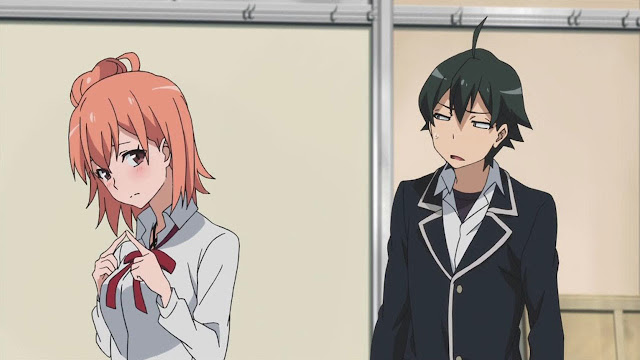 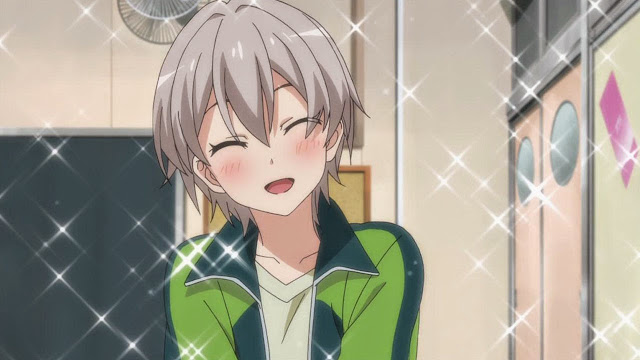 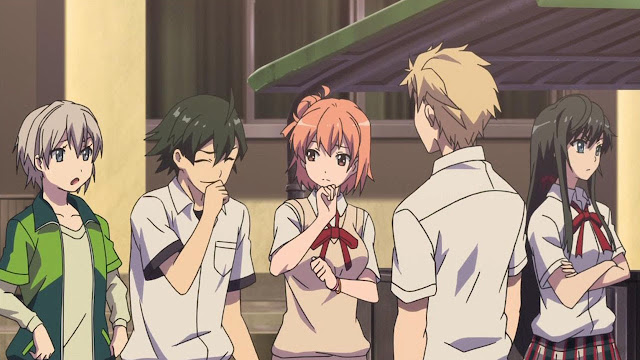 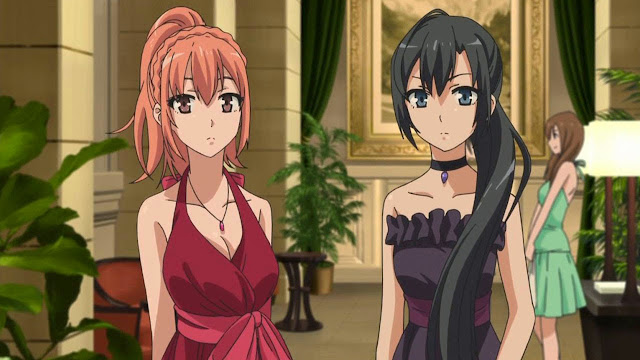 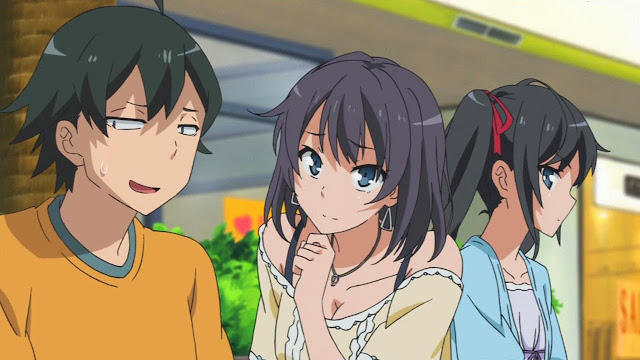 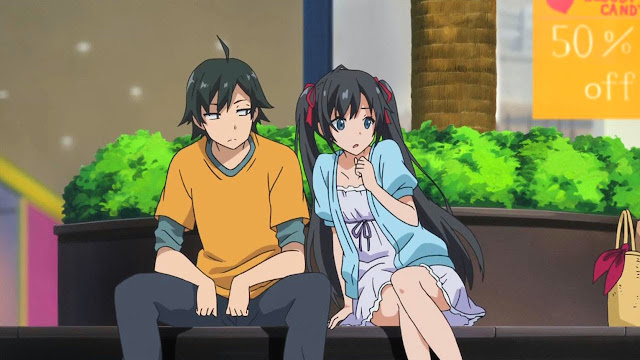 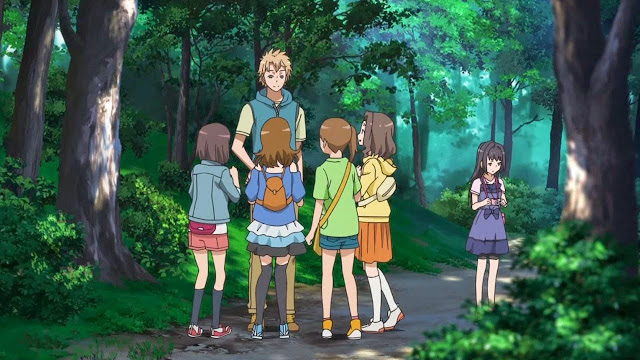 Despite bearing “romantic comedy” in its title, OreGairu is driven by sociological themes pertaining to high school life. Through his interactions with Yukino and Yui in the Volunteer club, Hikigaya is drawn into socialising far more than he is wont as he helps the Volunteer club solve problems experienced by their classmates. One of their earliest assignments is to help Saika Totsuka with tennis; after this passes, Saika and Hikigaya speak with one another more frequently, hanging out with Hikigaya on occasions. Another noteworthy assignment is when Hayato Hayama requests the Volunteer club get to the bottom of a chain letter scandalising his friends. Hikigaya realises that Hayato’s friends do not get along particularly well in his absence, and so, decides that his friends must learn to become friends with one another as well, achieving this by setting them in the same group on a careers field trip without Hayato. Hikigaya’s methods, though unorthodox, are remarkably effective: he claims that he is a master of non-verbal communication and is quick to figure out effective solutions for social problems the various individuals in the series encounters. Hikigaya succeeds because his solutions depend on his cynical views of society, counting on obscurity to dampen the effects of his actions. During the Cultural Festival, Hikigaya selects an array of hurtful words to motivate Minami Sagami into doing her role, drawing fire away from her to ensure the Cultural Festival ends on a positive note even if he must become the most hated person on campus. I’ve seen comparisons drawn between this and the Batman’s choice to take the blame for Harvey Dent’s murders in The Dark Knight to ensure that the mob is beaten. This comparison stands to some extent because in both cases, the protagonist takes the fall for someone else so that something bigger than themselves can continue forward. However, whereas Bruce Wayne does what he does out of his unwavering belief that he can save Gotham, Hikigaya initially acts to spare people of the suffering he experienced back in middle school. Hikigaya believes that to change is to give in, but time with Yui and Yukino gradually opens his heart up. Bruce Wayne’s determination to do good and resolute belief that Rachel was going to wait for him, on the other hand, means he is unable to move on following Rachel’s death in The Dark Knight, until The Dark Knight Rises sets him a new series of trials that allow Bruce Wayne to move beyond the cowl. This occurs over a much longer period than OreGairu, where Hikigaya slowly realises that there are people who stand in his corner, and by the end of the series, Hikigaya decides that youth is something that can be enjoyed, after all. 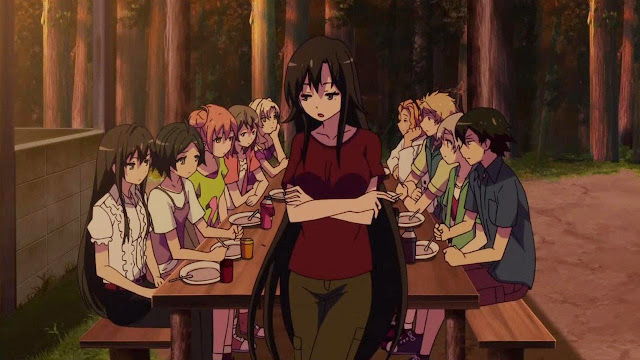 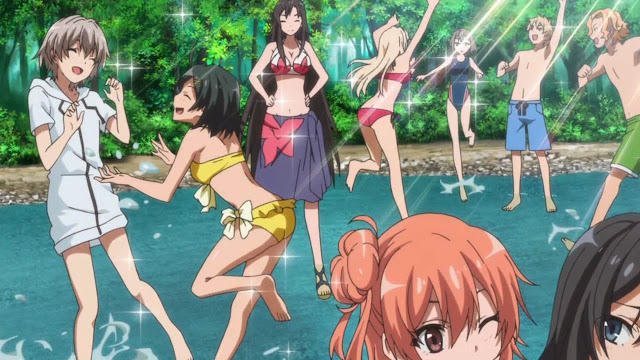 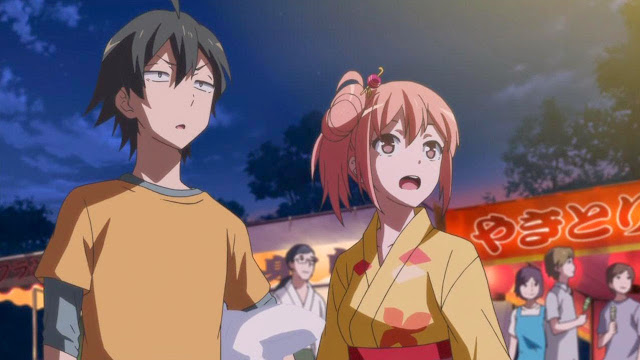 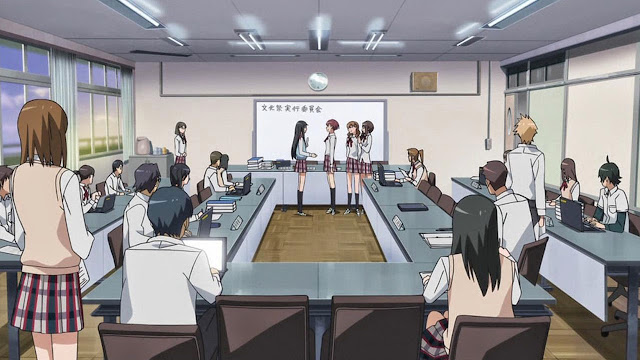 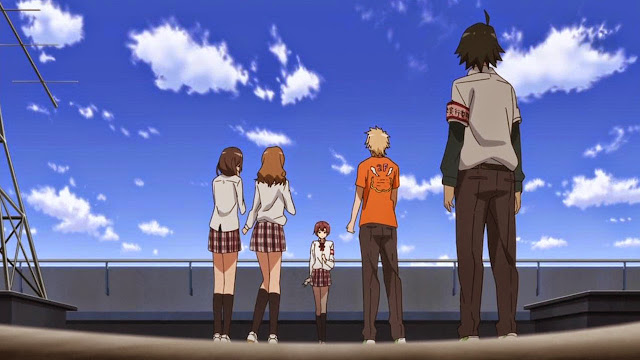 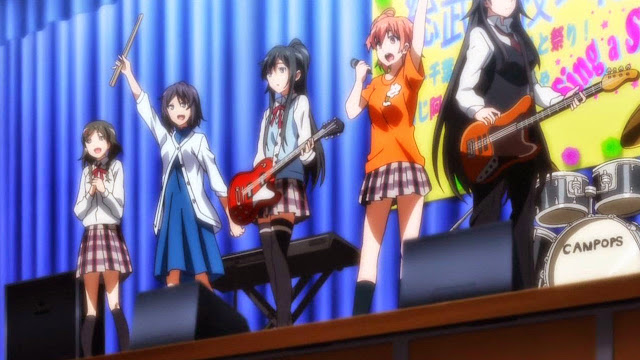 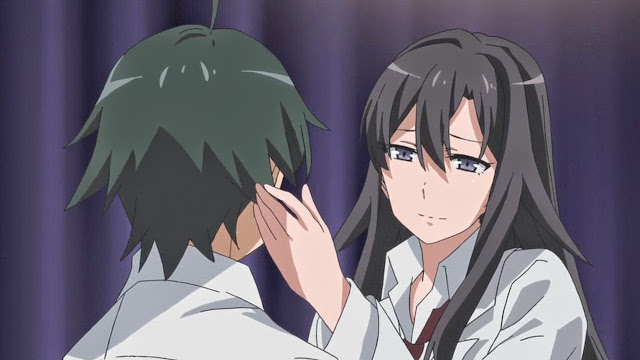 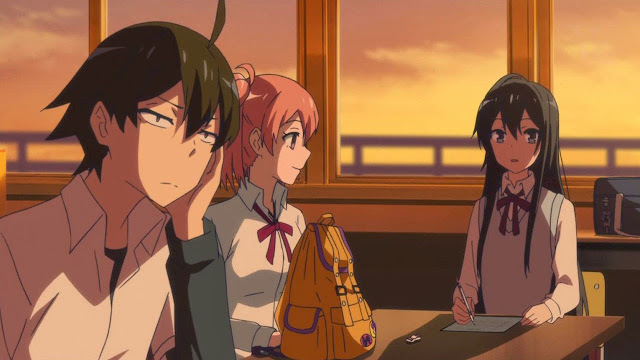 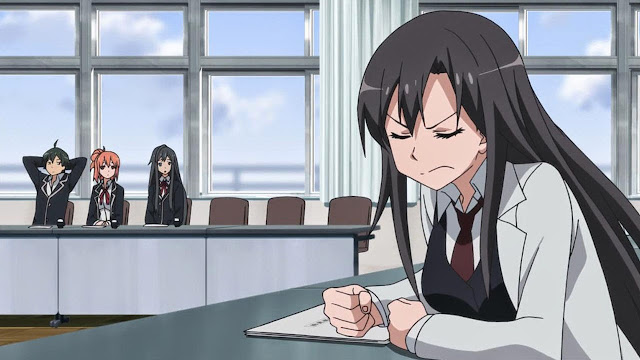 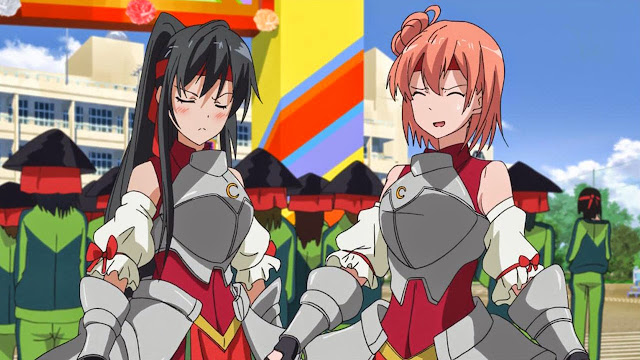 The “romantic comedy” elements come in subtly throughout the series: based on the setup, either Yui or Yukino will become closer to Hikigaya. On one end of the spectrum, Yui is very energetic and optimistic, offsetting the gloomy air that surrounds Hikigaya, while on the other end, Yukino, who shares Hikigaya’s world views but exercises more finesse when dealing with people. While Yui is likely to try and cheer up Hikigawa or storm off when he says the wrong thing, Yukino prefers dueling him with words. After Yui tries to make her feelings known to Hikigaya early on, the latter replies that it is likely that the former likes him out of a misplaced sense of gratitude (i.e. for saving her dog). This sense of bitterness stems from his past failures, and rather than experience false hope, he prefers to ignore all signs of romance, leading him to turn down Yui. Similarly, when Yukino and Hikigaya are left on their own to find Yui a birthday gift after Komachi (who’d set this up) leaves, Yukino’s older sister wonders if the two are dating. Both girls have interesting interactions with Hikigaya; it is no understatement to say that both of them uniquely contribute to Hikigaya’s growth throughout the series, helping him re-learn what benevolence is by experiencing the tougher times with him and coming out a little stronger. For better or worse, Hikigaya’s experiences with the Volunteer club do wind up changing him, and as it stands, OreGairu winds up being a highly entertaining series. This anime can fire up the viewer’s thought centers while watching Hikigaya’s rationale for his actions while simutaneously leading to damn good comedy elsewhere. The high school setting may be done to death, although OreGairu manages to keep things refreshing through taking a bold step by using novel characters. I believe there is a second season that is set to come out somewhere in the future. Now, first seasons of shows like these (think OreImo and Haganai) have always been brilliant works that hit all of the right points, while subsequent seasons have always delved deeper into the romantic elements: if this trend follows, while I’m not too sure how OreGairu will turn out, I will watch it with an open mind and brace myself for romance. Naturally, I’ll be rooting for Yui, since she seems to balance out Hikigaya and is a better fit for him as far as personalities go, pulling him from cynicism with her own cheerfulness.