“Now you go and play your part. You know it in here: it’s the one place where you can decide for yourself who you are. Don’t ever lose it.” —Commander Daguza Mackle

The Earth Federation and ECOAS execute their assault on Palau, with the intention of rescuing Banagher and the Unicorn. Saboteurs destroy Palau’s connecting bridges, while the Nahel Argama unleashes its Hyper-Mega Particle Cannon, pushing the asteroids towards each other to damage much of the Sleeves’ forces. Any Sleeves unit getting out is ambushed by ECOAS units hiding in the rocks. Riddhe springs Audrey from detention so they can go to Earth and talk to his father, Ronan, but not before trying to convince a surprised Micott about their intentions. Banagher finds the Unicorn Gundam and tries to escape, defeating Marida in the process. She is eventually captured and Alberto Vist is allowed to escort her to an Anaheim Electronics facility on Earth. Banagher and Daguza proceed to the remains of Laplace with the intention of activating Laplace’s Box, but hear the original broadcast of the Earth Federation establishment ceremony. The Sleeves are not far behind and the EFSF/ECOAS units fight them. The Sinanju appears and Daguza sacrifices his life to buy Banagher some time to activate the Unicorn’s Destroy Mode. The fight sheds parts of the Laplace colony and sends them into the atmosphere. Banagher continues to pursue Full Frontal during the re-entry, but a beam magnum shot meant for the Sinanju hits Gilboa Sant instead. As Banagher and the Nahel Argama enter the atmosphere, Audrey arrives at the Marcenas estate. 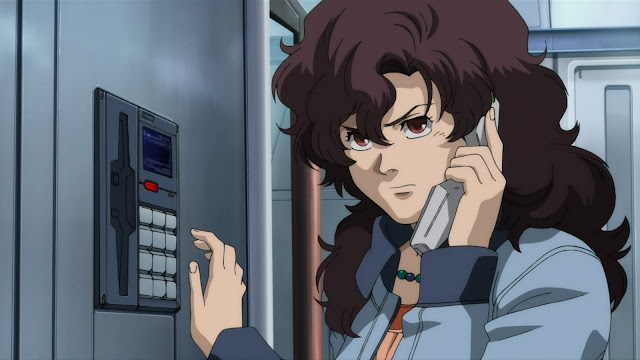 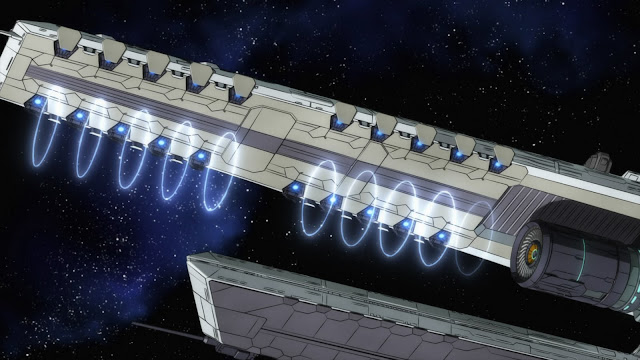 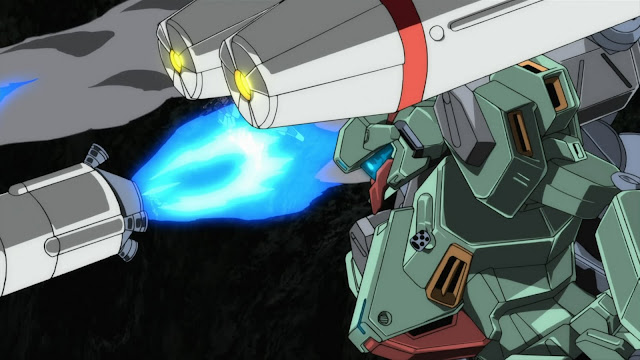 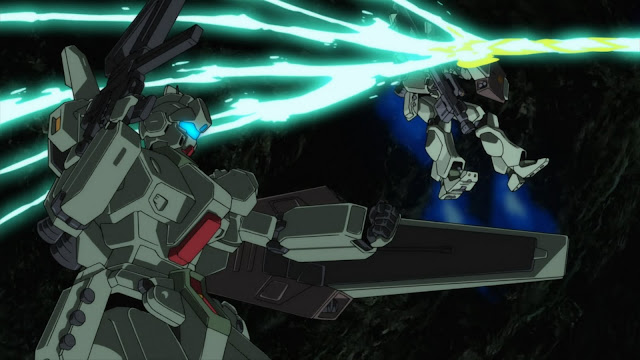 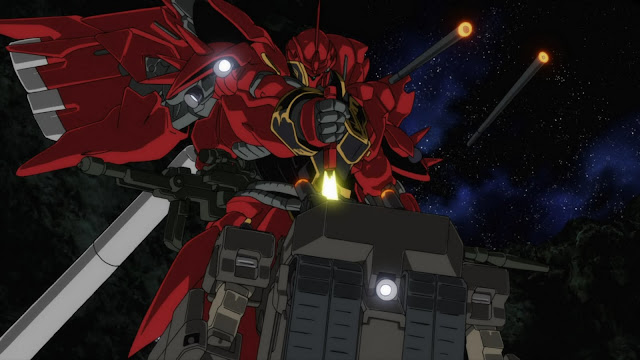 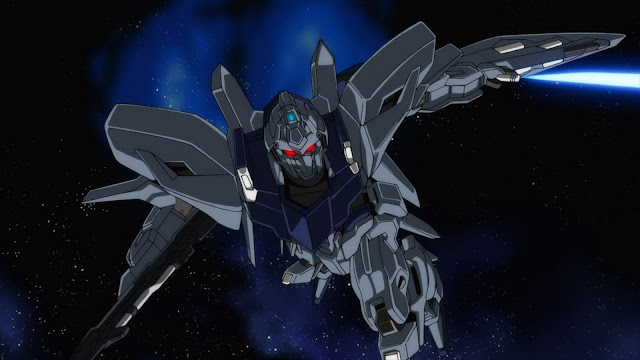 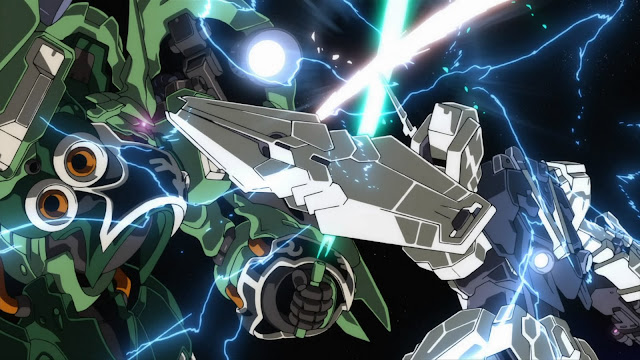 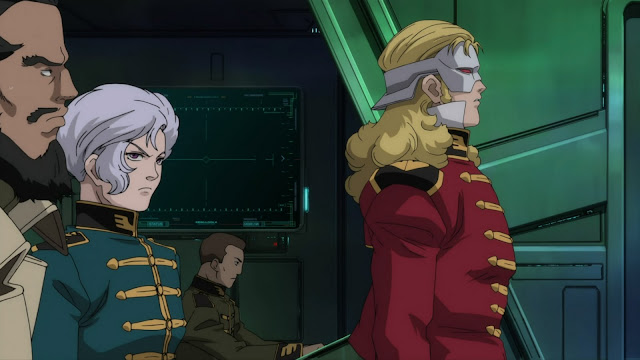 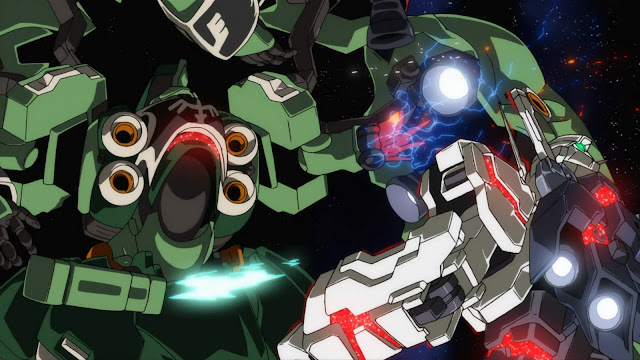 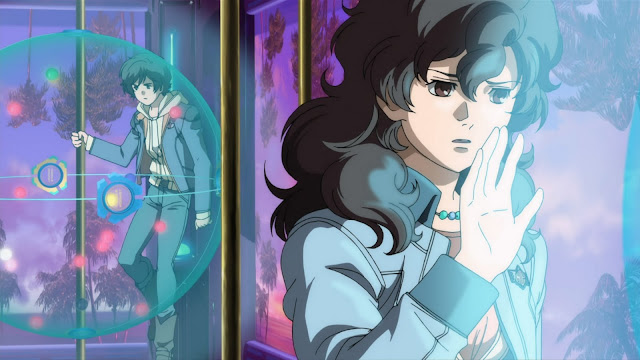 Responsibility is the core to episode three, although it comes across as somewhat of a surprise to see discussions skate over this aspect, perhaps subtly hinting at the general trends towards both not understanding what responsibility entails, and eschewing responsibility for one’s actions. Unfortunately, this is becoming worryingly common in present society: as people make mistakes, rather than admitting that they erred, individuals may prefer to let someone else take the fall so that their own reputations are preserved. The unwillingness to discuss what constitutes responsibility is a troubling indicator of what youth may believe these days, that actions have no consequences and it is up to someone else to clean up after one’s messes. To this end, the third episode in Gundam Unicorn deals with Commander Daguza’s interpretation of responsibility, or the obligation to carry out a duty expected of them as a moral commitment. Concepts pertaining to responsibility are taught at a young age; children are shown what it means for people uphold their society, and those who fail to carry out these duties might be seen as indulging on society’s understanding. Gundam Unicorn presents responsibility as a commitment to a cause or people: Commander Daguza’s words might initially sound harsh or unreasonable to Banagher, who feels that he’s no soldier and that responsibility shouldn’t entail taking lives. However, there is more meaning behind Daguza’s words: because of Banagher’s choice to step into the Unicorn Gundam, for better or worse, Banagher does hold the fate of many in his hands (every shot the Unicorn fires has the potential to save or take a life). By choosing to become the Unicorn’s pilot, Banagher’s commitment is to see Cardeas Vist’s visions of revealing the secrets of Laplace’s Box to the world to its completion and to help Audrey to the best of his ability. Daguza is not fully aware of these details, but nonethless is able to appreciate the significance of Banagher’s decisions. To Daguza, Banagher must uphold his end of the deal and finish what he’s started by continuing to deploy in the Unicorn and bring the pieces of the puzzle together. When Banagher attempts to argue his way out, Daguza points out that Banagher would merely be running away from his duties, given that he has already committed (however unwillingly) to being the Unicorn’s pilot. Thus, Commander Daguza can be seen as a mentor figure for Banagher, informing him that responsibility doesn’t mean taking lives, but rather, fulfilling the obligations that are associated with taking up a particular role. This leaves a particularly strong imprint on Banagher following Daguza’s death, and subsequently leads Banagher down the path he chooses in later episodes, acting as a reminder about how responsibility in seeing a task through means finishing something to the best of their ability with the intent and hope that things will turn out for the better. 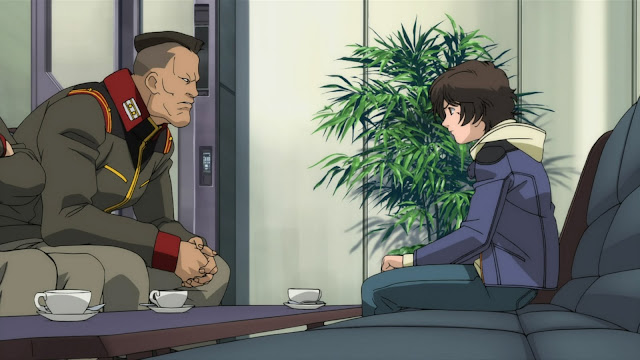 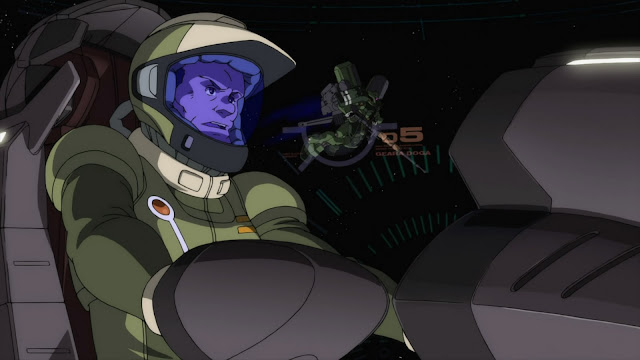 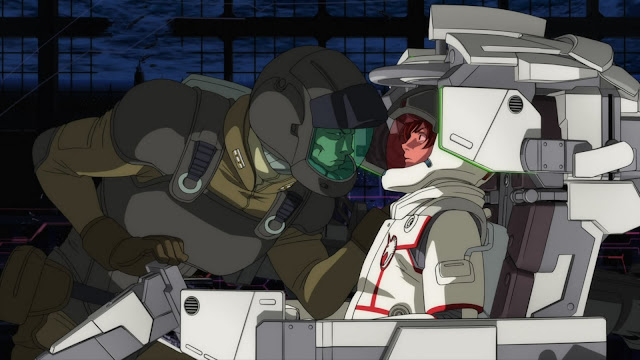 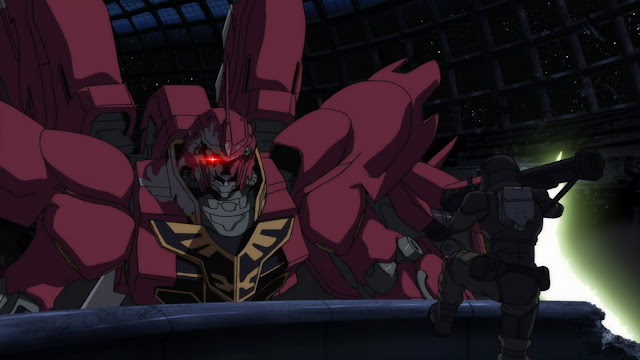 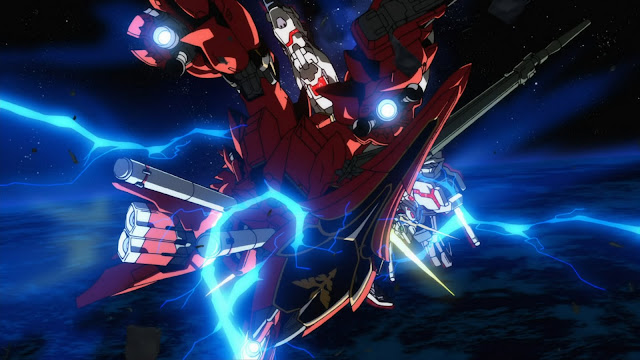 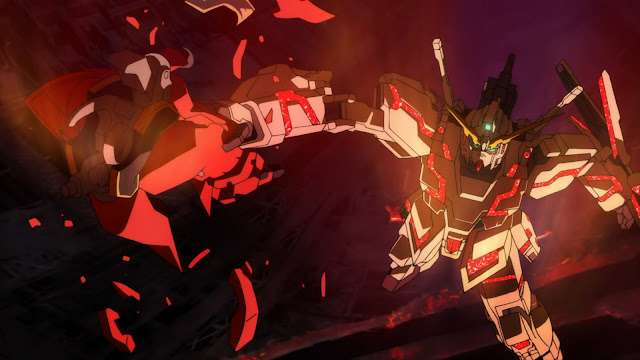 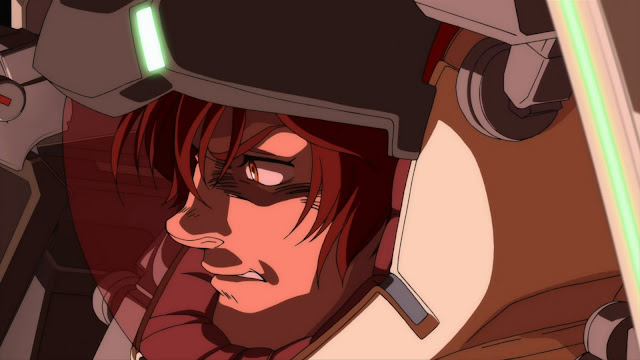 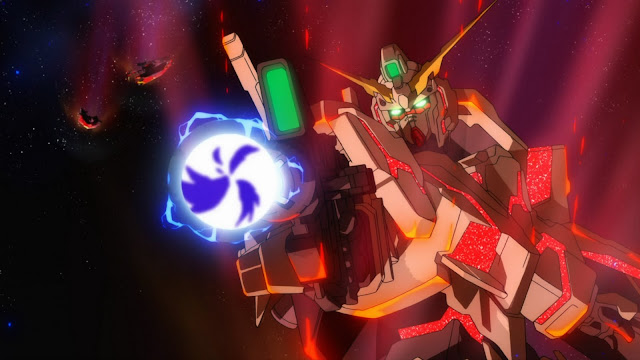 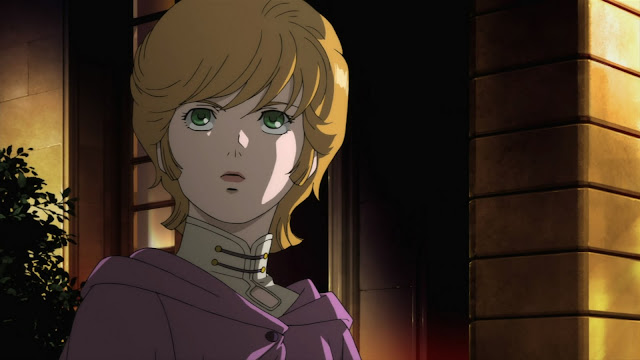 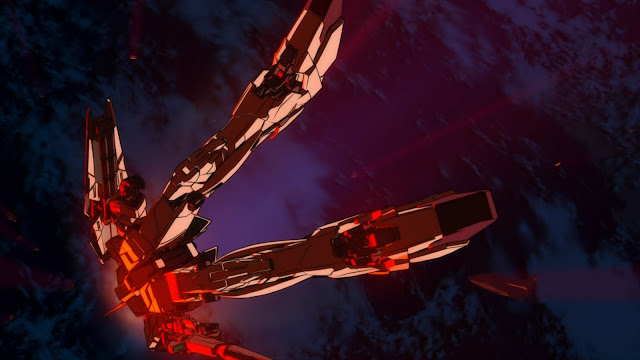 Aside from the episode’s keystone topic of responsibility, the third episode also explores how in warfare, the sides aren’t necessarily black and white: the parties perceived as the “bad guys” may have justifiable reasons for fighting, and the “good guys” may often use questionable methods to yield results. In this case, the Garencieres team are presented as humans who simply have a reason to participate in the conflict, and Banagher’s realisation that Marida is the Kshatriya’s pilot leads him to reach an understanding with her. For Banagher, the Sleeves are not necessarily composed of a single-minded people bent on warfare. Similarly, while Banagher initially views the Federation as a bureaucracy acting for its own political interests, his interactions with Captain Otto and Commander Daguza eventually leave a more positive impression, showing how despite being “cogs in a machine” (as Daguza puts it), the Federation forces are ordinary people doing their jobs. Gundam Unicorn excels in humanising both sides of the conflict, which means that for Banagher, it becomes difficult to suddenly train a weapon on a mobile suit belonging to the other side and fire. Because of this development, Daguza and Gilboa’s deaths at the end of the episode come across as particularly tragic, and indeed, this will weigh on Banagher’s conscience in the future. Aside from raising the right questions about conflict and depicting Banagher’s gradually increasing role in the hunt for Laplace’s Box, episode three is an incredible sight for the eyes, beginning with a concerted assault on Palau to recover the Unicorn, followed by a moving duel with the Kshatriya or Banagher’s fury-induced fight with Full Frontal over the Laplace wreckage. These scenes were simultaneously engaging but frightening to watch, giving viewers some idea of the kind of horrors the Unicorn can pull off under the right circumstances, whether it was taking control of Kshatriya’s funnels, physically tearing the Sinanju’s left leg off, shredding Angelo’s Geara Zulu in the span of seconds or producing a beam sabre the same size of the one produced by Gundam 00‘s lead machine, the 00 Raiser. During the course of this fight, one song in the background was particularly powerful. Known as “MAD-NUG” on the soundtrack, it is a piece that conveys the kind of power behind the Unicorn’s destroy mode, and is named thus as the inverse to “Gundam”: the idea of a Gundam is to symbolise hope on the battlefield for the side who possesses it, so inverting the spelling can be seen as inverting the meaning. The opposite of hope is despair and terror. When the destroy mode is activated, the Gundam has the potential to devastate an enemy, striking fear into their hearts, but even frightening those who possess the Gundam. Episode three ends with the mobile suits and the Garencieres re-entering in the earth’s atmosphere. During atmospheric re-entry, atmospheric drag and aerodynamic heating causes exposed surfaces to glow red-hot, while making it near-impossible to control the vehicle in the process. Viewers watch as the suits fall, seemingly helplessly, into the atmosphere, reflecting on how for the present, control over the entire Laplace conflict has slipped from both sides involved. This time, the wait for the next episode would be shorter, with only four months separating episodes three and four.

2 responses to “Six Days of Gundam Unicorn, Part Three: The Spectre of Laplace”