Girls und Panzer: This is the Real Anzio Battle! (Reflection, screenshots and commentary)

“If the tanks succeed, then victory follows.” —Heinz Guderian

After Yukari successfully carries out her assignment and discovers Anzio High’s secret weapon, a Carro Amato P40, Ooarai begins devising strategems for overcoming them. Later, Miho pays a visit to Erwin and Caeser’s place; besides learning more about Anzio’s loadout, they also decide practise and make the most of their Sturmgeschütz III Ausf. F. On the day of the match, Anzio puts up a fierce battle, fielding the L3/33 tankette, the P40 and Semovente 75/18 self-propelled guns in their loadout. Initially distracted by decoys Anzio sets, Ooarai soon finds several of their tanks under fire: Duck team is engaged by the tankettes, and Hippo team is engaged by one of the Semoventes. Meanwhile, after a harrowing chase, Anglerfish team manages to score a direct hit against the flag tank, ending the battle. In the match’s aftermath, Ooarai attends a celebration Anzio hosts, and Anchovy resolves to fully support Miho and Ooarai in their final battle, but accidentally sleep through it. It’s been a little more than a year since I’ve watched anything related to Girls und Panzer, and if memory serves, knowledge that the long awaited OVA about Ooarai’s match with Anzio has been with viewers since at least last September. Despite being nowhere near as long as the wait for the Gundam Unicorn finale, the wait for the Anzio OVA to air felt about as long. The OVA finally aired yesterday in Japanese theatres: clocking in at half an hour, it’s a fantastic journey that does something most anime neglect to do: exploring how an outcome was reached where they were previously omitted. Here, the OVA tells the story behind just how Ooarai defeated Anzio. In its original run, Girls und Panzer only depicts Anzio as having lost the match, with Anchovy climbing out of her tank and plopping down in exhaustion. However, there was a thrilling story behind how Ooarai reached this point; I myself boldly claimed that Anzio was wrecked in a one-sided battle, but this OVA has soundly shown that I was incorrect. To that, I can say that sometimes, it’s good to be wrong, and indeed, I’m hoping that viewers out there enjoyed it half as much as I did.

The OVA takes after the same aesthetic as Girls und Panzer‘s original run; having the perfect balance between exposition and combat sequences, the Anzio battle reminds viewers of everything that made Girls und Panzer so enjoyable. Over its thirty-minute run, preparations from both Anzio and Ooarai are shown. Opening with Anchovy giving a speech to her team, the episode soon shifts to Yukari’s path towards acquiring intel for their upcoming match. This time around, she blends right in with Anzio’s students and enjoys some of the sights and sounds on their vessel before attending an open presentation about the P40, without blowing her cover. Beyond this, the episode is structured rationally, showcasing planning and training session between Ooarai as they prepare for their upcoming match. The additional time in the OVA means that it is possible to illustrate these aspects, and adds the sense that Ooarai has put in a substantial amount of effort to earn their victories. When the match itself kicks off, Anzio displays excellent use of deception. According to source materials, Anzio is quite short of funds, forcing them to depend on superior strategy to challenge technically superior opponents. The fight itself is evenly matched and a thrill to watch (even if the emotional tenor isn’t as charged as it was against Black Forest): even though viewers know that Ooarai will stand triumphant, watching Anzio put up such an effort imparted a solid impression of the OVA. However, the single most rewarding aspect in the OVA is Anchovy’s personality. She is depicted as self-confident and hot-blooded, viewing battles as a duel between the two commanders in the manga, but the OVA shows that Anchovy also cares about her teammates and demonstrates exemplary sportsmanship, even throwing a party after the match is over. Girls und Panzer did a phenomenal job with its core message about the significance of sportsmanship and friendship over the single-minded pursuit of victory, and the OVA rises to the occasion magnificently. 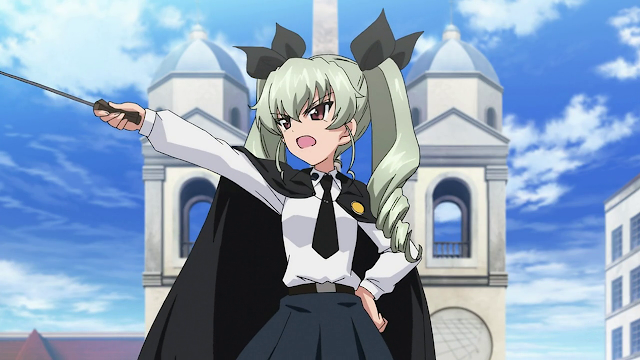 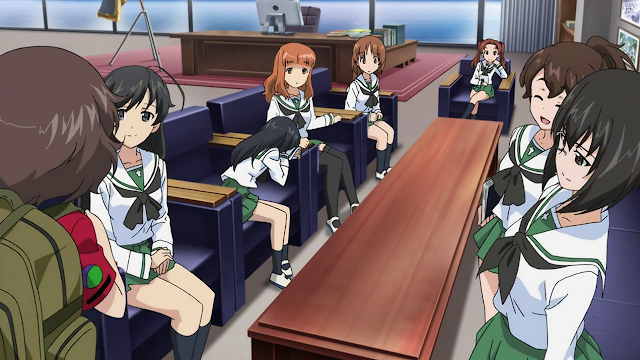 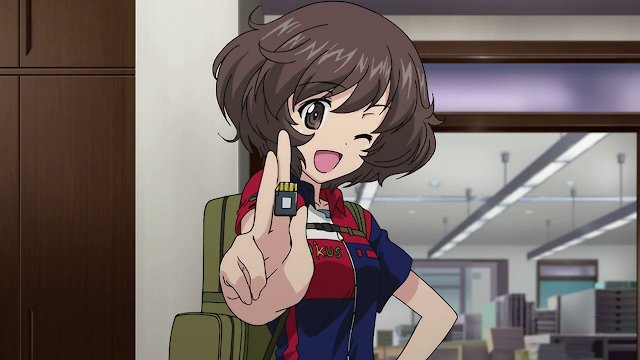 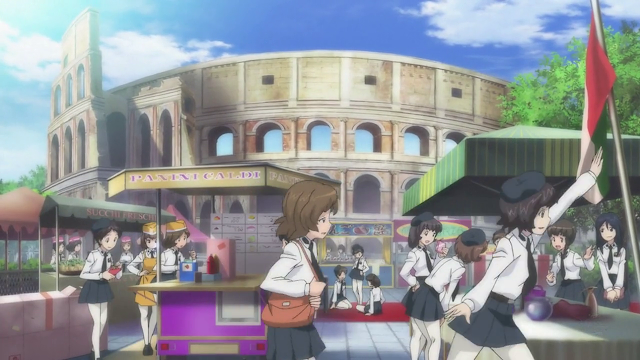 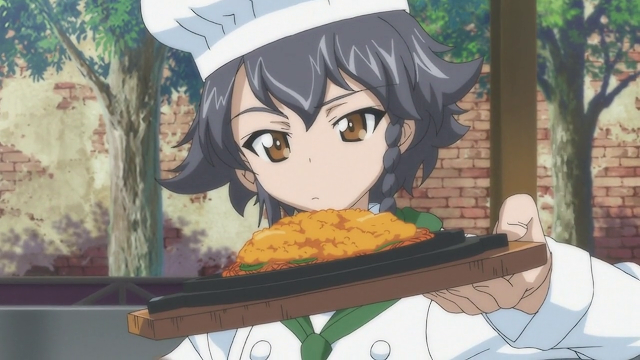 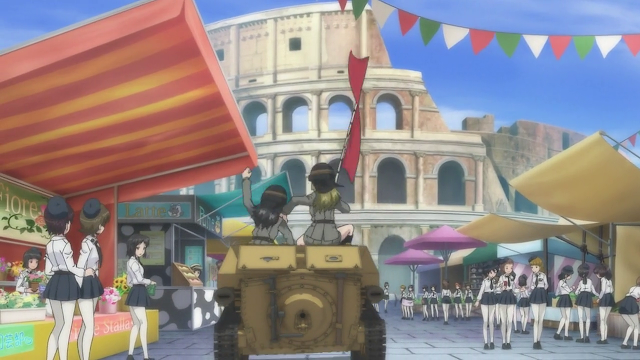 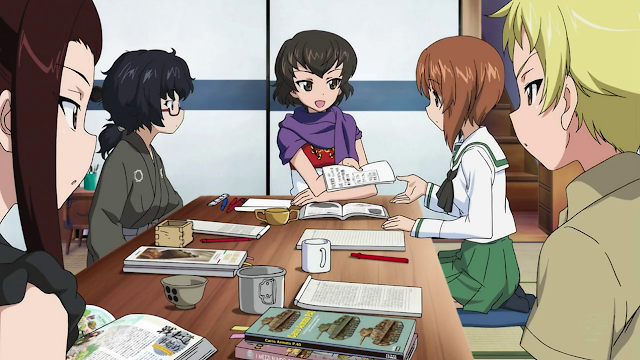 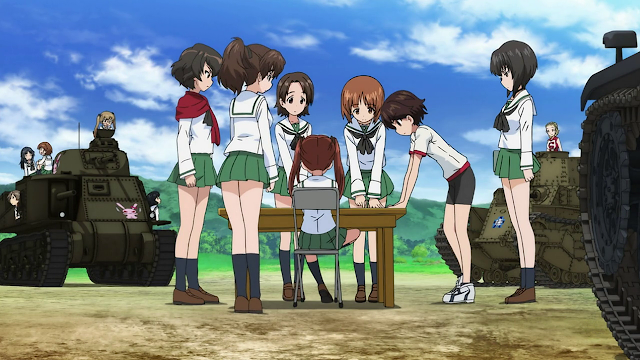 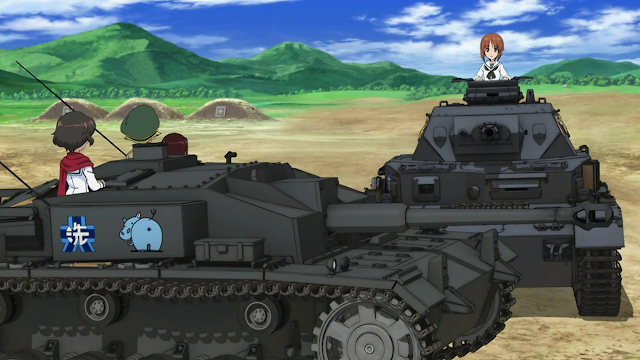 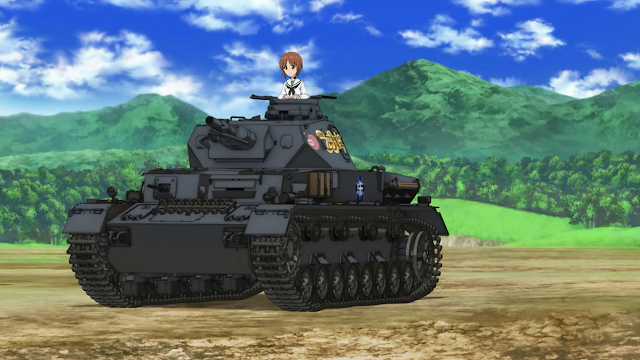 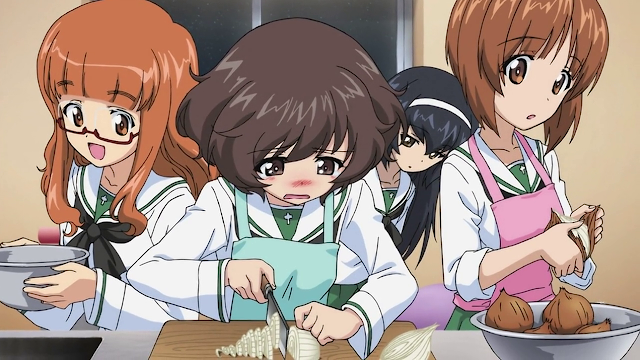 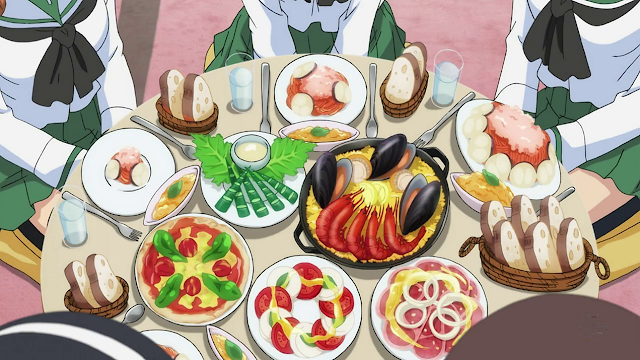 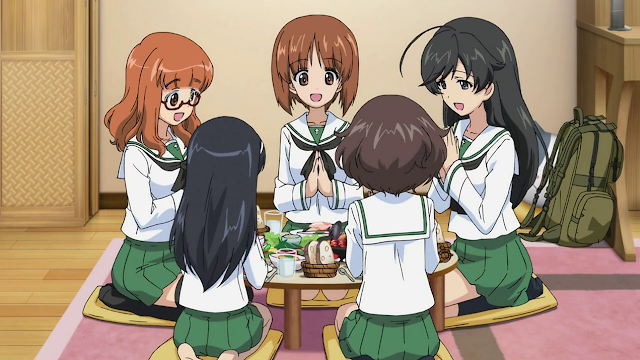 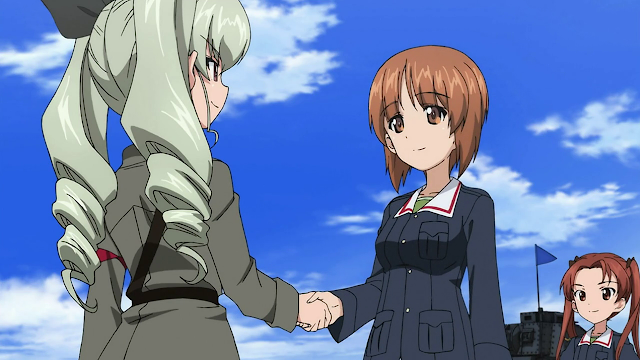 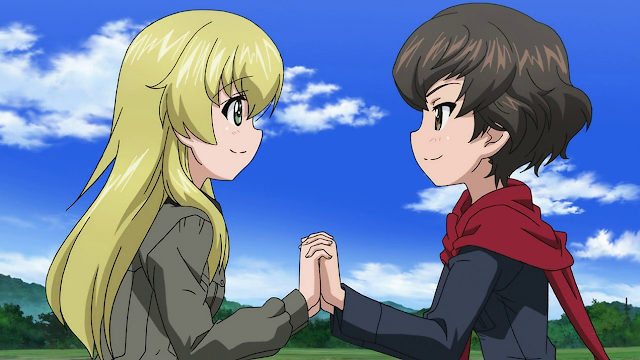 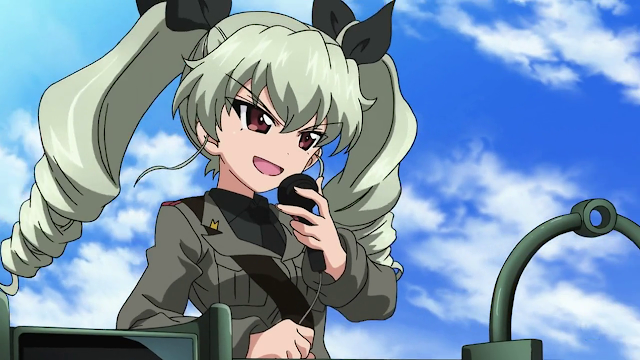 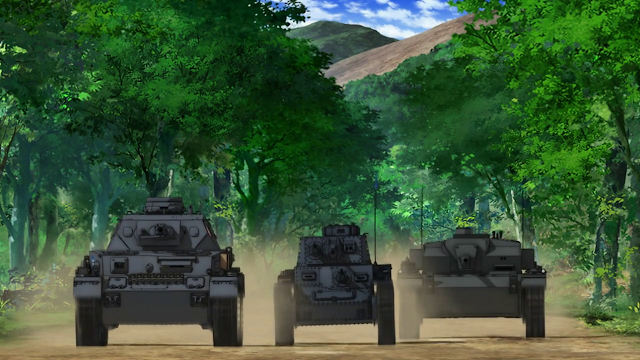 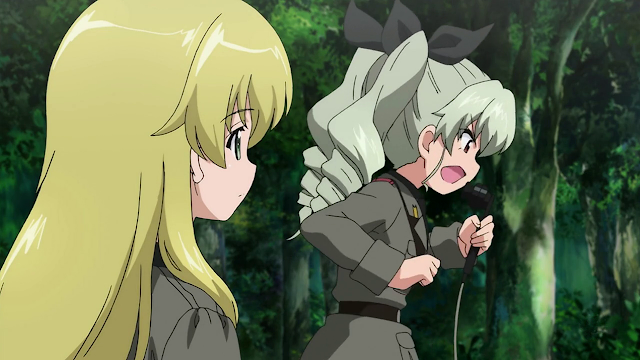 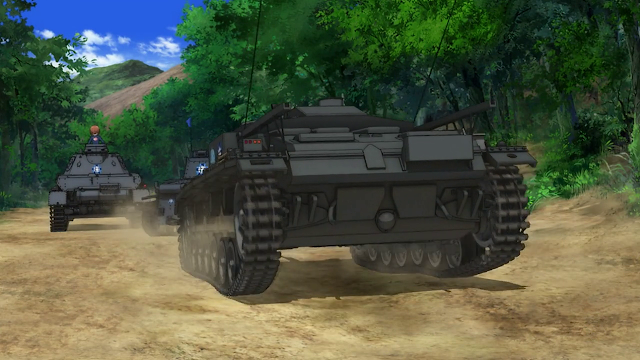 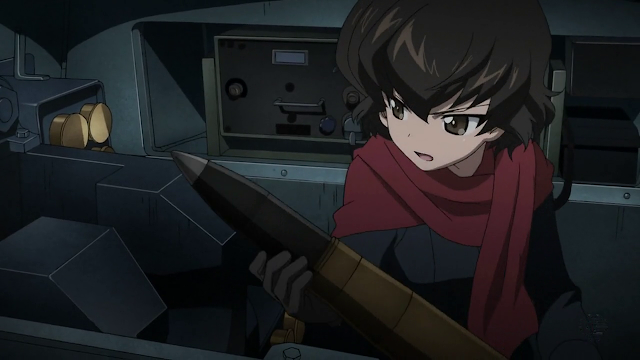 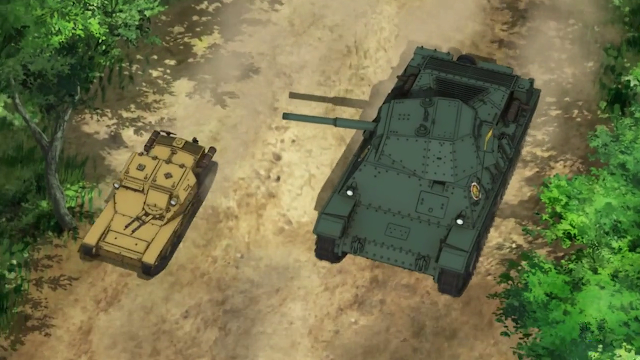 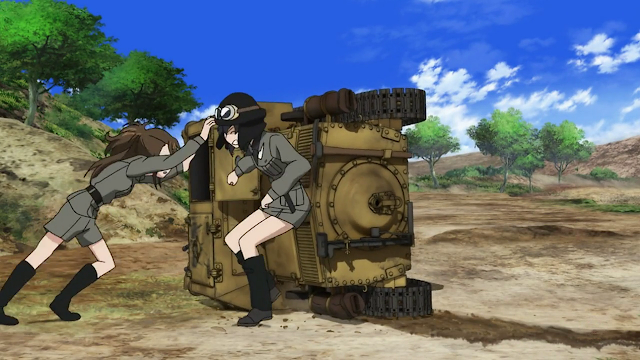 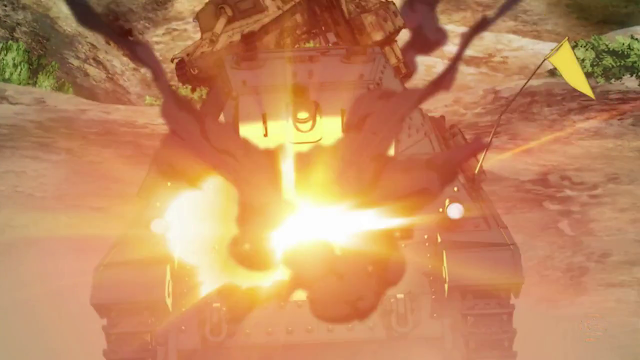 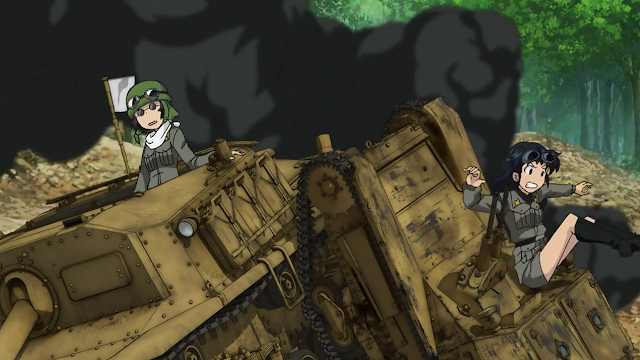 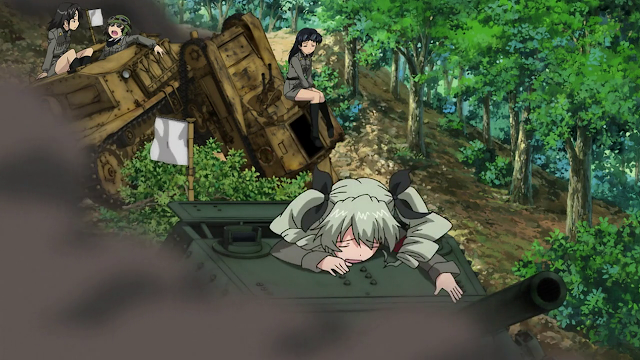 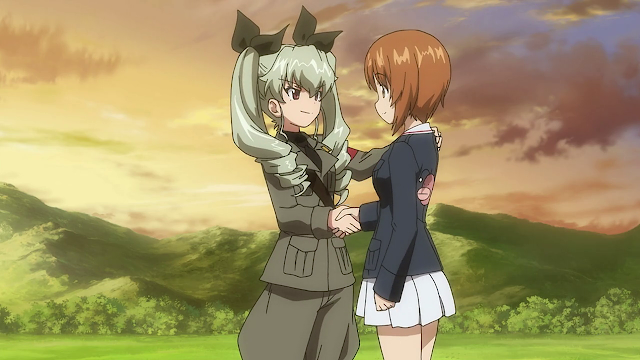 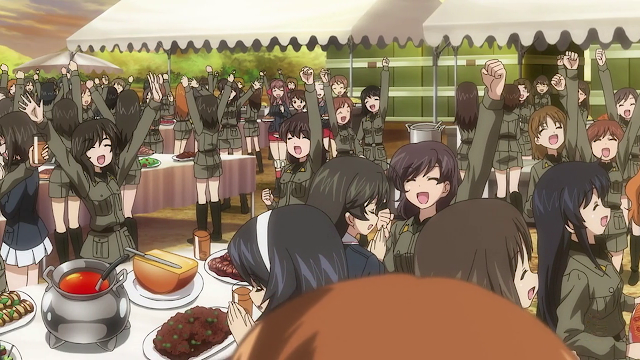 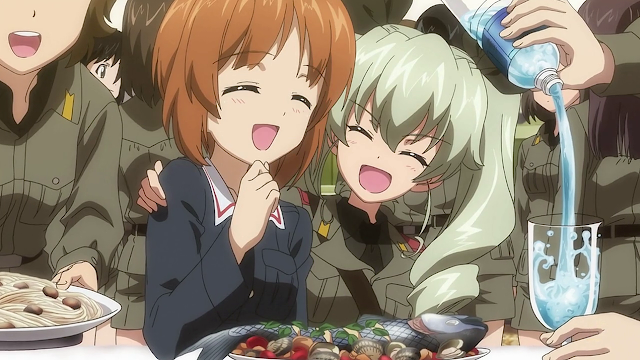 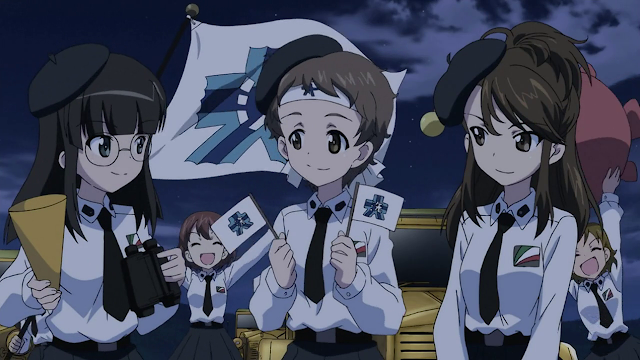 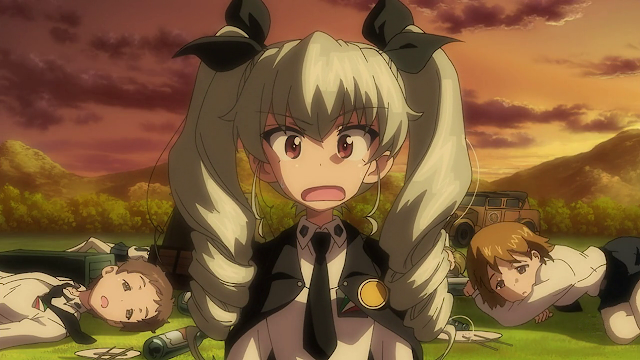 With the OVA now over, and the BD/DVD set for a release on July 25, the next big Girls und Panzer thing is easily the movie. It’s releasing later this year, which means that, barring the lucky individuals who will travel to Japan to see said movie, the movie should be available somewhere in 2015 (probably Spring). At present, some images have surfaced on the world wide web, depicting Miho participating in a joint military exercise with St. Gloriana and Chi-ha Tan. Information about the movie has been tight so far, but given what I’ve seen in Girls und Panzer, I know that, whatever awaits viewers, it will be quite worth their while.

17 responses to “Girls und Panzer: This is the Real Anzio Battle! (Reflection, screenshots and commentary)”