Gochuumon wa Usagi Desu ka? (“Is the Order a Rabbit?”, abbreviated GochiUsa for brevity) is an anime from the Spring 2014 season, and follows Cocoa Hoto’s life in a new town, having moved there to attend school. To finance her accommodation, she works as a waitress with Chino Kafuu at the latter’s family’s Rabbit House café. As far as trends go, GochiUsa joins the ranks of the many, many slice-of-life anime I take to watching every season. One understandably asks: what about slice-of-life make it worth watching? There is no simple answer, but it is possible to compare slice-of-life anime to pizza, a relatively common and widely-enjoyed food. Rather like how pizza can be prepared in a myriad of ways, slice-of-life encompasses a variety of settings, and those who maintain an open-minded stance may encounter a refreshing or a particularly enjoyable addition. The quality of the anime is dependent on the execution, similar to how pizzas can vary widely in quality depending on the vendor. Hence, even though roughly two-fifths of my library consists of slice-of-life anime, each of the shows hold a unique aspect that make them worth watching. 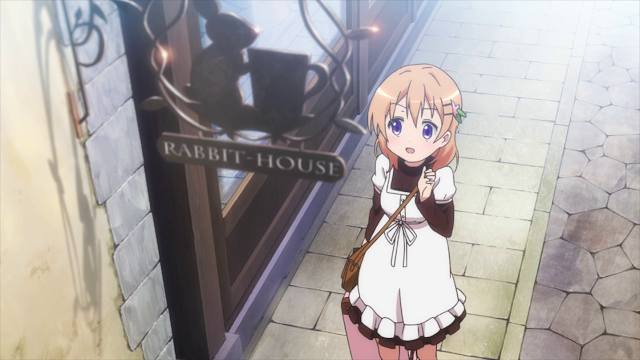 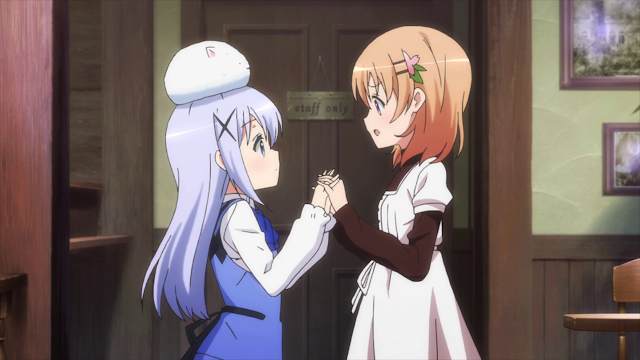 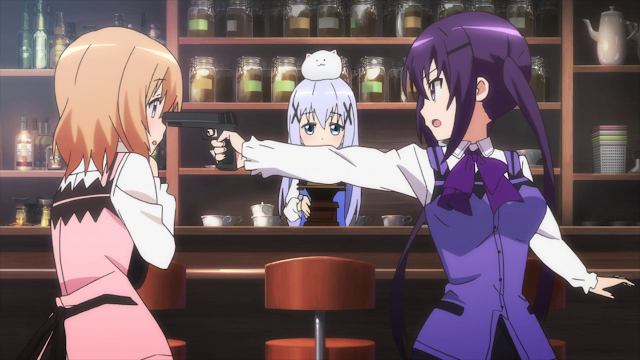 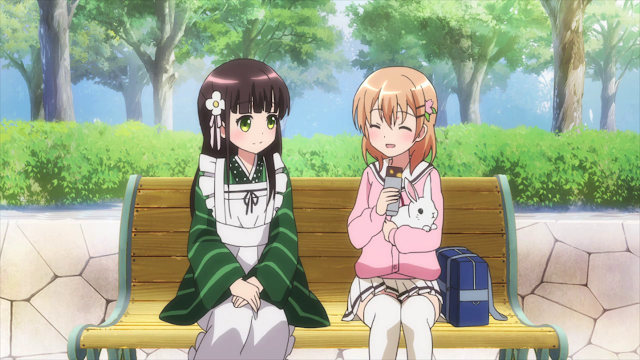 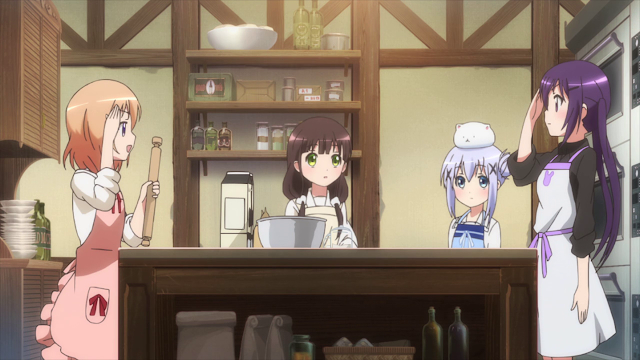 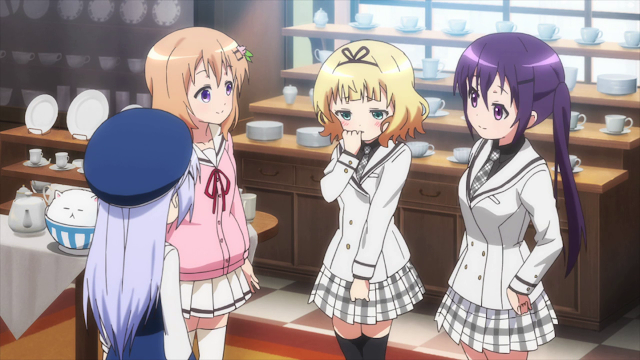 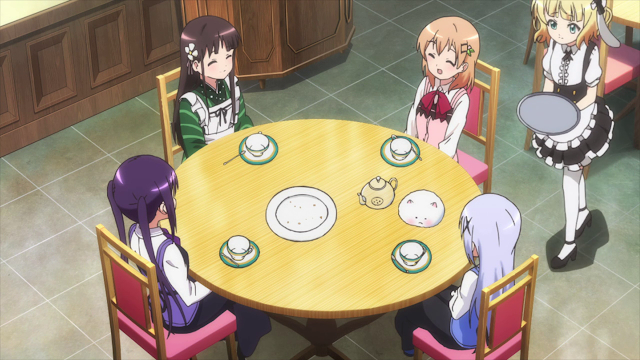 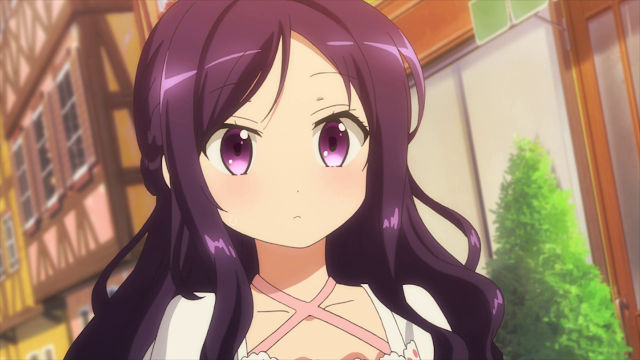 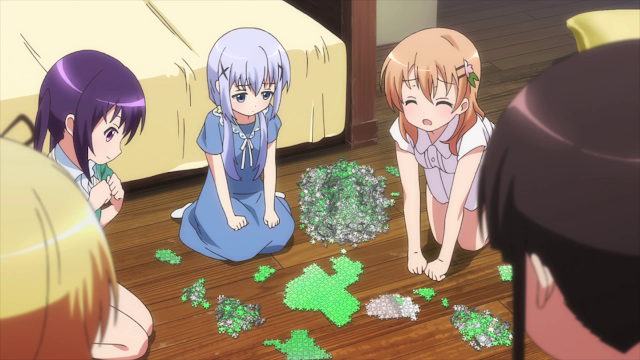 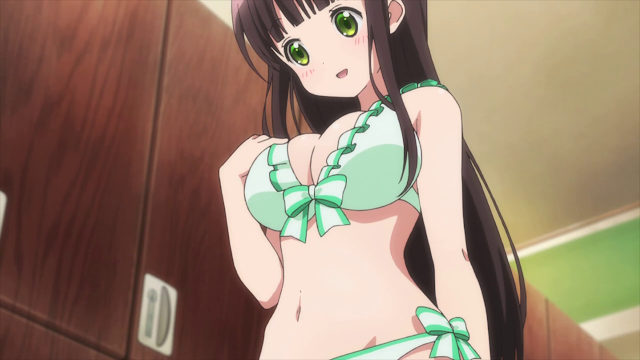 In GochiUsa, the unique point lies with the setting, which is modelled after the French town of Colmar and features timber-framed buildings, as well as elements from Gothic and Renaissance architectural elements. Such an environment evokes a distinctly Germanic feel to the anime, bringing to mind the idyllic scene of a market square and traditional shops lined alongside cobblestone streets. This gently allows GochiUsa to present Cocoa’s experiences as being plausible without resorting to the sort of fanservice that might otherwise permeate the anime: working in a traditional coffee house with such ornate costumes would seem out of place in a contemporary setting. Indeed, GochiUsa takes the time to present beautiful scenes from the unnamed town this anime is set in, giving the sense that life in this town is pleasant. Of course, classical architecture blends in with modern conveniences like mobile phones and Rize Tedeza’s Glock (likely chambered for the 9 x 19 mm Parabellum round): these date from more recent times and feel somewhat out of place, suggesting that GochiUsa is set in the modern period, and the town could very well be living history museum, not dissimilar to Heritage Park Historical Village, albeit with a much greater size. 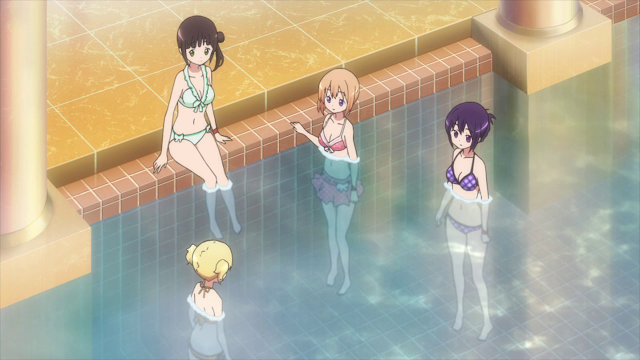 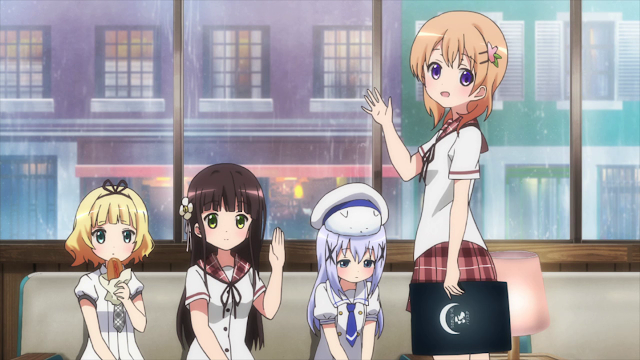 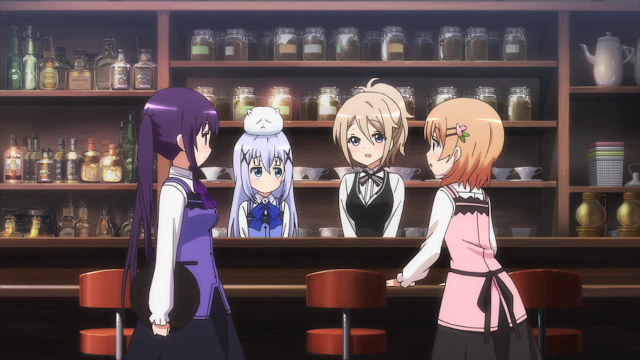 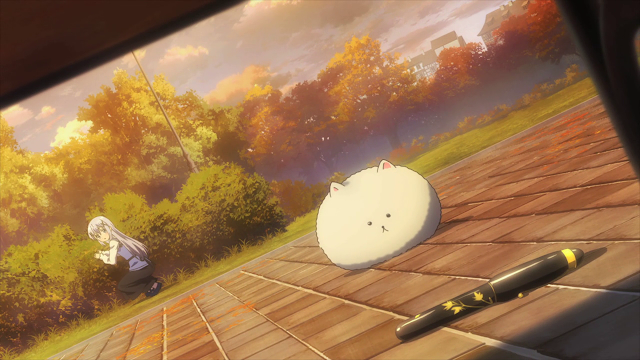 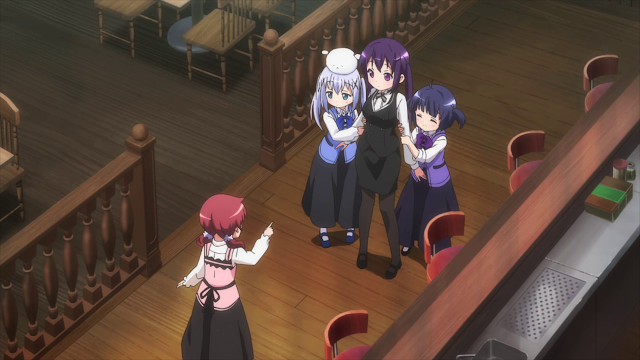 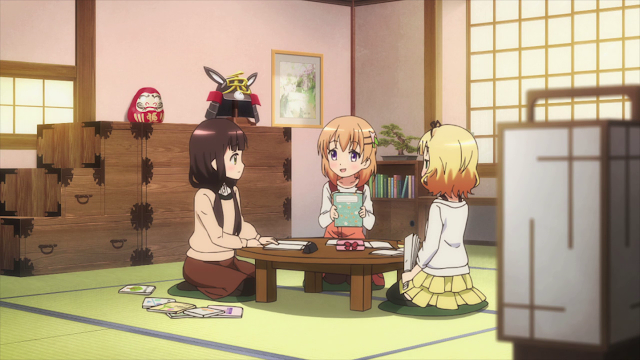 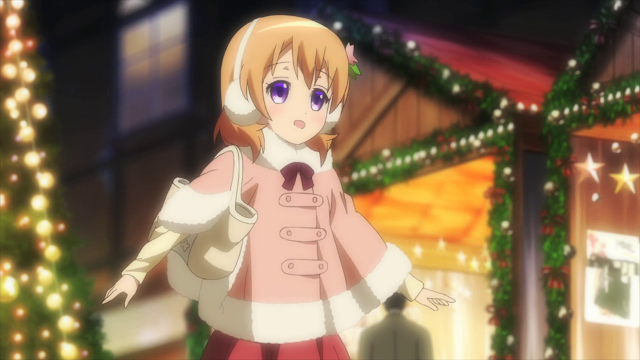 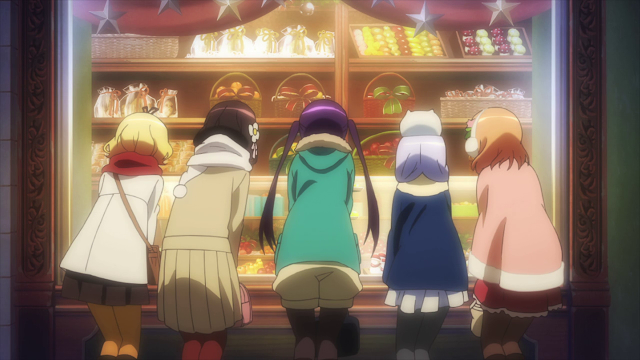 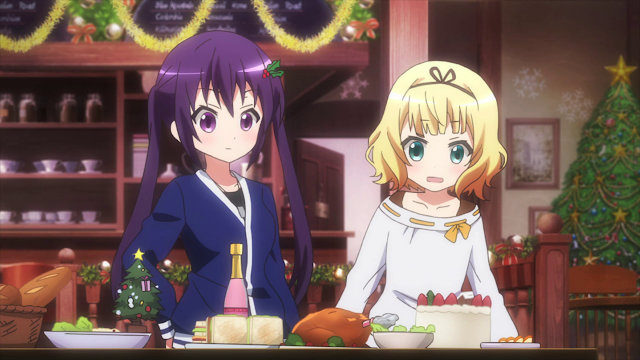 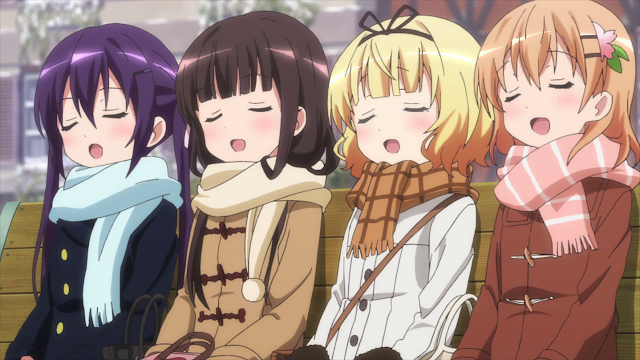 Its beautiful setting aside, how does GochiUsa stack up as an anime, especially in light of all the powerhouse titles I’ve watched recently (including the Gundam Unicorn finale and Puella Magi Madoka Magica: Rebellion Story)? There is a charm to slice-of-life stories that make them ideal for relaxing to after a workday, or during lunch hour. The things that Cocoa, Chino, Rize, Sharyo and Chiya experience might be ordinary, but the girls turn these into memorable moments spent together, whether it be watching a movie, working at their cafés, relaxing at their local pool or celebrating Christmas together. Coupled with the humour that can only be found in a series with plenty of rabbits and moé characters, GochiUsa ends up being just the thing for anyone seeking a light-hearted romp through Cocoa and Chino’s life. Anime of this sort might be perceived as “harming the industry” (and other phrases of that sentiment), but the fact is that every season, there are plenty of triple-A titles that come out, featuring complex stories, sophisticated themes and, some might expect, events and implications to challenge one’s way of thinking. These anime are excellent in their own right, but to expect the same from slice-of-life is folly. At the end of the day, anime like GochiUsa continue providing relaxing, amusing shows for those who are looking to unwind; though the characters feel familiar, GochiUsa sets things in a world that is welcoming, offering a calming respite from the fires of software development. 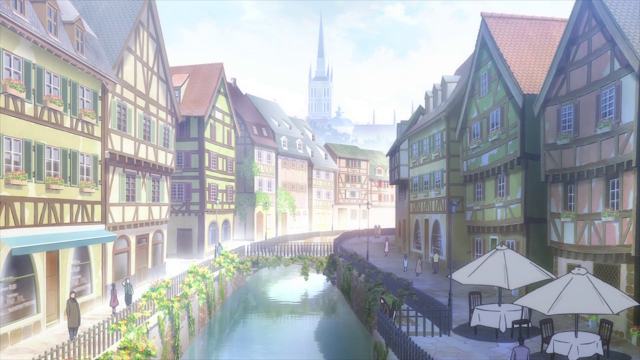 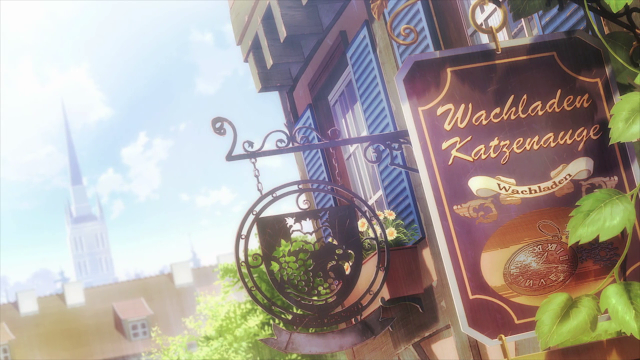 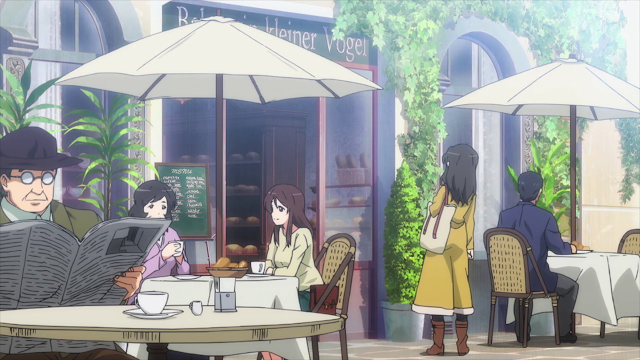 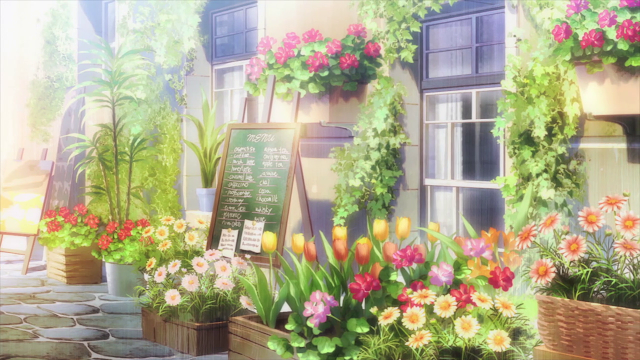 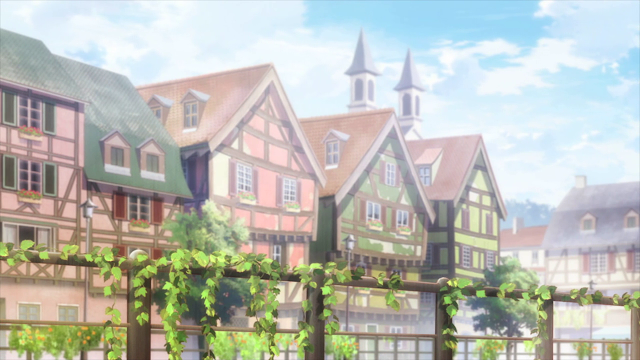 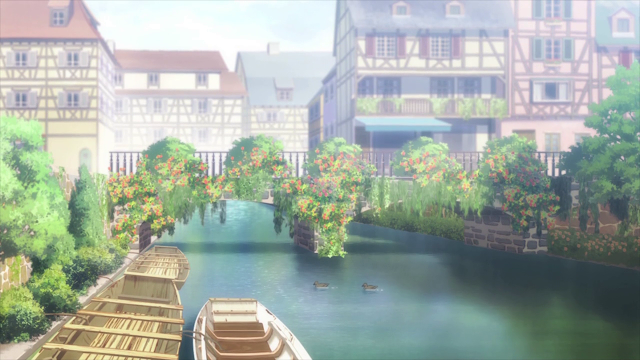 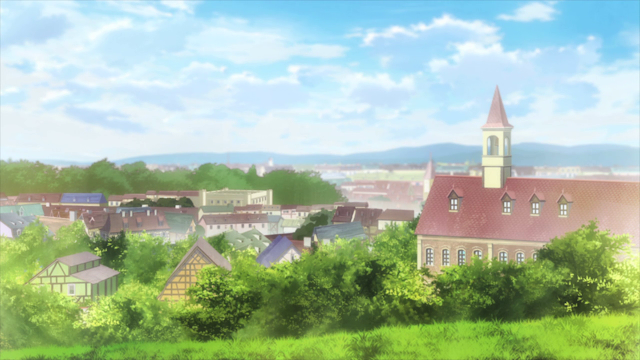 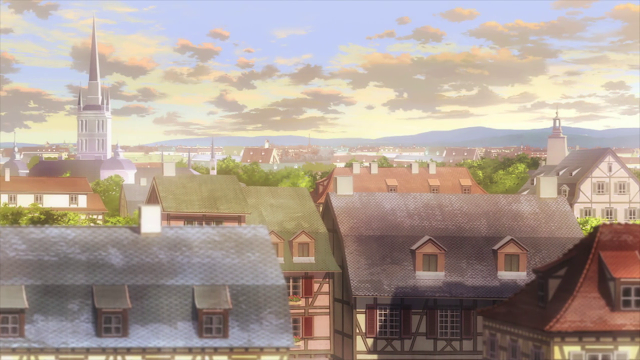 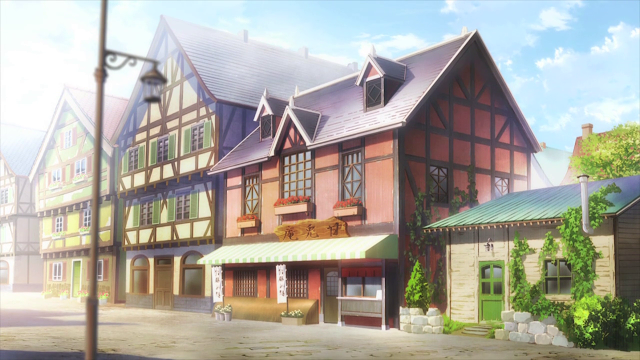 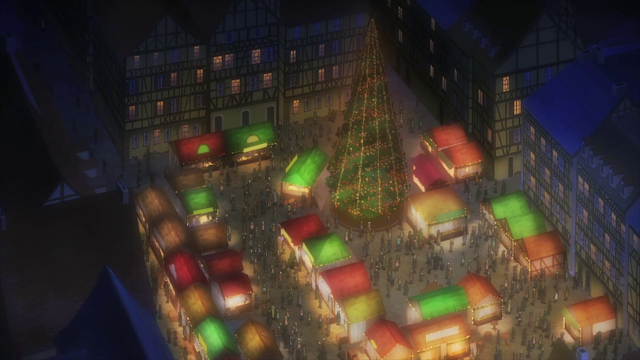 Thus ends the post now, I promise. I close off with the remark that I thoroughly enjoyed GochiUsa‘s soundtrack as much as I did the anime, and I look forwards to its release. At the time of writing, the opening and ending songs are out, plus character songs for Chino, Rize and Cocoa.