Revisiting Tari Tari: The architecture that talks back

“We shape our buildings; thereafter they shape us.” —Winston Churchill

Aside from being one of the premier anime of the Summer 2012 block for its touching story of a group of high school students who sought to make the most of their lives before graduation, Tari Tari also stood out for its visual aesthetics; beyond the absolutely stunning quality of the landscapes, P.A. Works also invested a substantial amount of effort into its architecture. Architecture often goes unnoticed in an anime such as Tari Tari, where the character dynamics are more noticed and discussed compared to the setting design. Upon re-watching Tari Tari, perhaps more so in other anime, the architecture does seem to make a rather subtle statement about the major themes in Tari Tari. As an anime that strives to breathe insight into the character’s lives, buildings are constructed with large glass façades, allowing light to stream into the building’s interiors and providing its occupants with much natural light. Much as how Shirahamazaka High School’s gymnasium, canteen and classrooms have a significant glass component in its design, the glass doubles to reflect on the duality in each character’s interactions: glass is transparent, allowing observers to peer into a building to some extent. Wakana, Konatsu, Sawa, Taichi and Wien experience problems from within, but learn the value of being transparent about their feelings to one another, in effect, allowing the others to peer into their mind. Similarly, by allowing their friends to aid them, each character is able to experience the benefits of having this support, much like how buildings gain a sense of warmth when allowing sunlight their interiors. More so than Hanasaku Iroha, the architecture subtly reflected on the character’s predispositions: just as buildings become more energy-efficient and aesthetically pleasing with the appropriate application of glass elements, individuals find that their inner lives can be enriched when they allow others to help them. 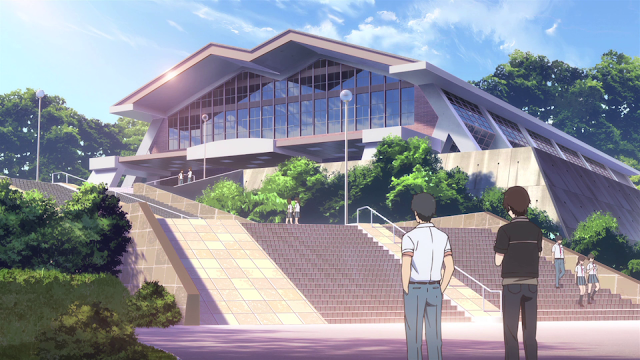 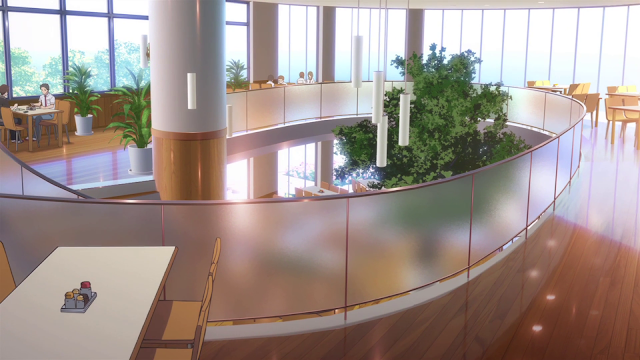 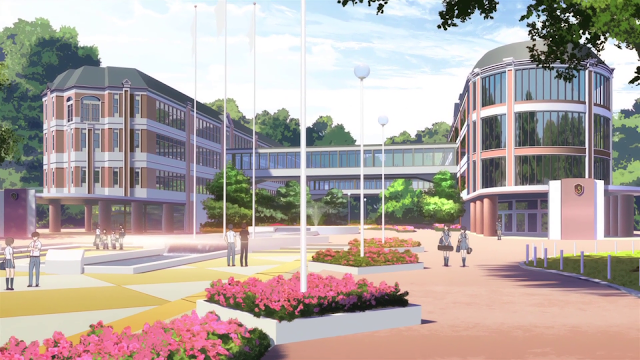 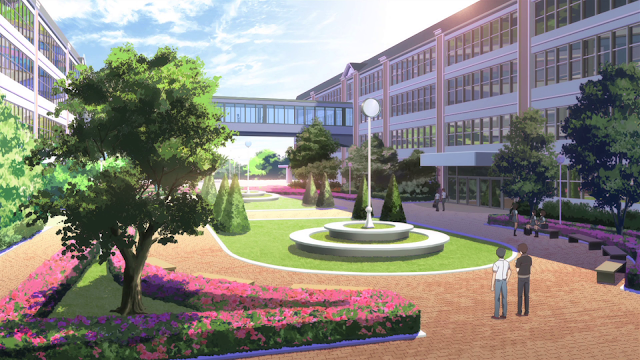 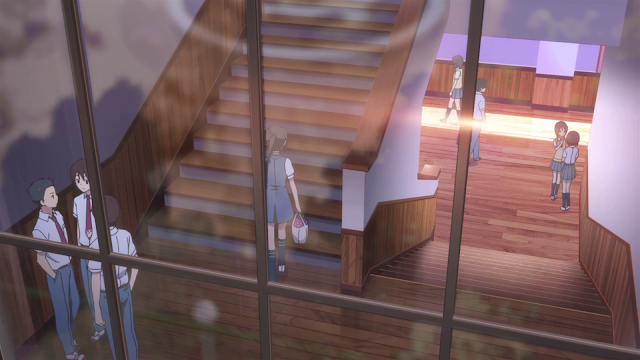 There is another passage about Tari Tari‘s architecture out there that motivated this post and whose origins escape my memory. This passage is stymied by a lack of discussion on how Tari Tari‘s architecture seems to fit with the anime’s message, and possesses several inaccuracies that merit correction. The main inaccuracy is the passage’s implication that Shirahamazaka High School is classified as having a minimalist, modernist design. In the original passage, the author argues that the use of glass, coupled with the use of gentle curvatures in the buildings, embody a Zen aesthetic common to minimalist architectural style. By definition, minimalist buildings make use of rectangular designs, horizontal and vertical lines, large spaces that are sparsely furnished and a reduction in elements not essential in the building’s structural components. From the exterior images, Shirahamazaka High School does not follow this pattern. The school is composed of two main buildings, each having a brick exterior and large glass windows on each floor, as opposed to the straight lines and the monochromatic colouring that defines minimalism. Moreover, the interiors, such as the canteen, make extensive use of hardwood and have a very warm, inviting feeling, compared to the colder feeling imparted by the minimalist design. The school’s design is characterised by the predominant usage of straight lines in its form, glass surfaces with minimal ornamentation and open interior spaces, characteristics of the International style (although the lack of cantilever construction and presence of a curvature in some parts of the main structure makes it more difficult to readily classify the school as such). While Shirahamazaka High School may be of another architectural style, it should be clear that minimalist, Shirahamazaka High School is not. Rather than emphasising the Zen aspects inherent in Japanese culture, Shirahamazaka High School incorporates more Western designs through its use of furnishings and interior design choices, which are more ornate relative to the Japanese interior aesthetics. The end result is a building that combines a liberal use of glass façades to encourage the permanence of natural light and interior concepts that serve to give the building a more inviting feel to it. Even if the building’s style cannot be readily discerned by those outside the architecture discipline, at the minimum, the building cannot be considered as minimalist, as it lacks the simple and well-defined contours characteristic to this particular style. 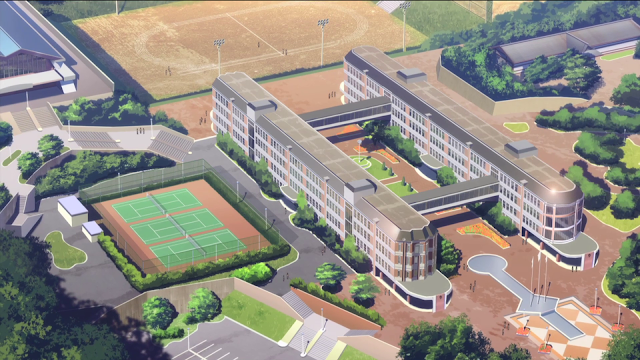 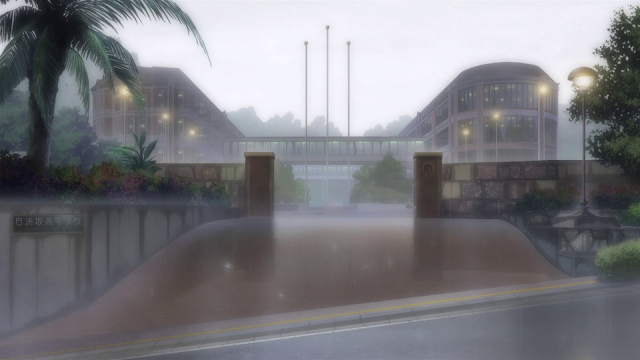 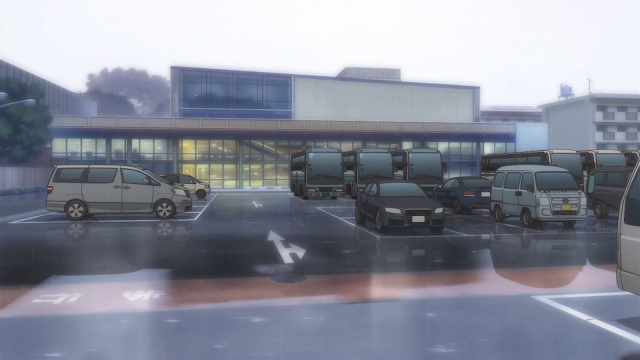 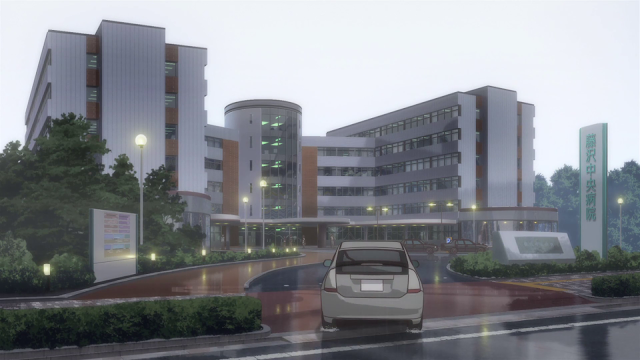 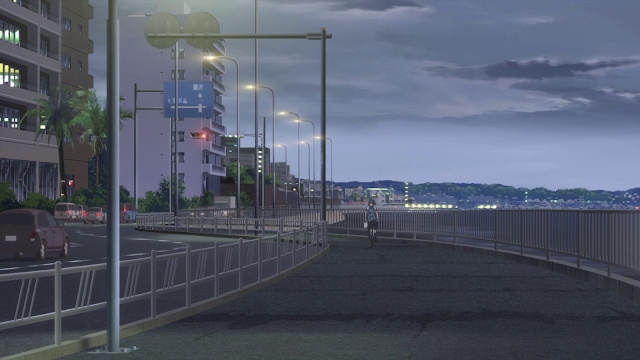 Settings have a substantial impact on the story, and if Tari Tari were to indeed adopt a minimalist, modern architectural style, the anime’s central themes would not have been succinctly portrayed. Such a setting would not be able to accurately convey Tari Tari‘s warm, inviting feeling. In such a simple setting, the anime would show that the characters and their problems were detached from their world; this is not the case, given that Tari Tari is about how trusting one’s friends is a step towards addressing and solving personal problems. From the perspective of any one character, one’s friends can be said to be part of the environment, and that the environment, through its architecture, could reflect on the dispositions of those occupying the environment. A cold, simple environment gives the aura that its occupants are of a likewise manner, focused only on what is necessary; were Tari Tari to make use of such a form of architecture, it would give the sense that Wakana, Konatsu, Sawa, Taichi and Wien would have been alone in their problems. This sense of distance is used in Puella Magi Madoka Magica to great effect: Mitakihara is portrayed as a vast city with clean, modern skyscrapers and vast industrial complexes. At the series’ inception, Madoka’s house is shown, alongside the promenade on the way to school. These places are inviting, being vividly coloured and giving viewers the sense that these are places Madoka is intimately familiar with. Similarly, the mall that Madoka and Sayaka visit has the hustle and glitz of a well-tread shopping centre. However, after Kyubey appears and begins explaining the terms of the magical girl contract, Mitakihara suddenly feels more distant, and as the series’ mood darkens, industrial complexes dominate the scenery. Madoka, a kind-hearted girl, seems exceptionally out of place in an artificial, hard environment, illustrating how detached she becomes from her world as she learns more about the secret behind magical girls. Minimalism, though appropriate (and well-executed) for an anime such as Puella Magi Madoka Magica, is not conducive to the themes and story in Tari Tari and accordingly, is not an architectural style that is prevalent throughout the series. 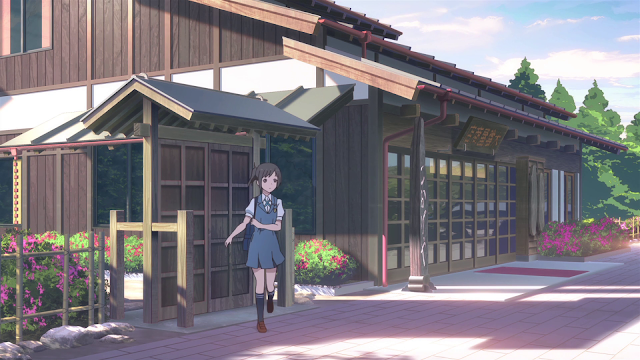 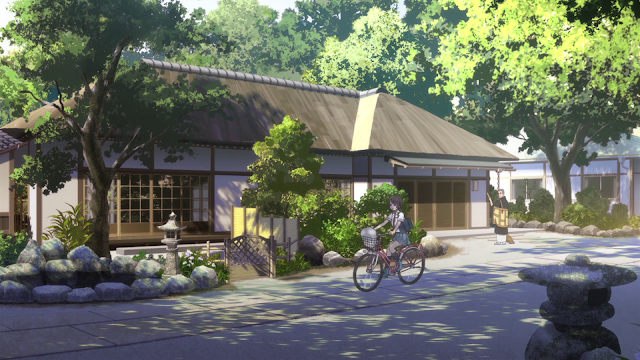 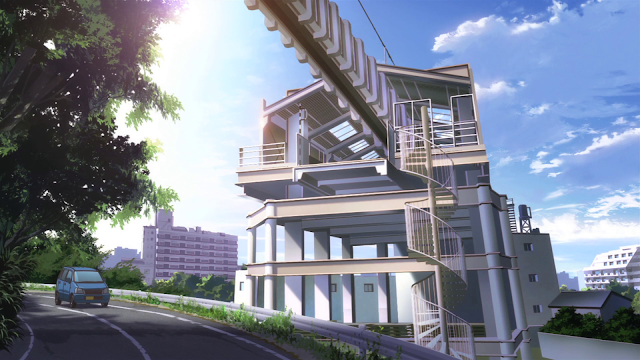 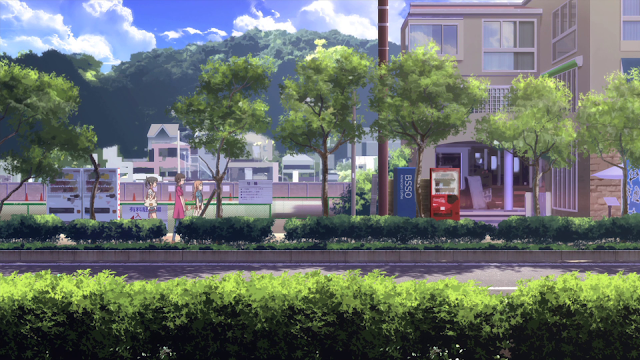 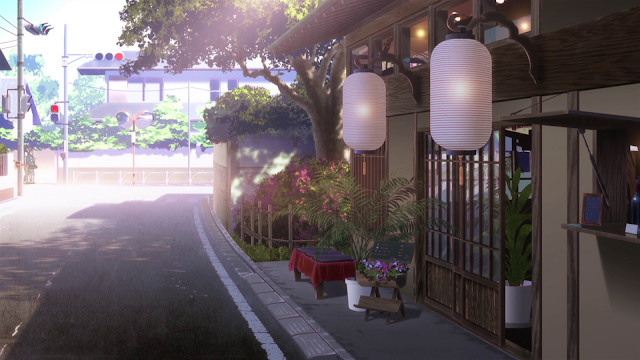 Shirahamazaka High School is, at the end of the day, a fictional building that was designed specifically for Tari Tari. Its importance to Tari Tari cannot be understated. However, outside of the high school, Tari Tari was inspired by the real-world buildings in Enoshima and the surrounding area, once again illustrating how meticulous P.A. Works was in their efforts to give the anime as much of a life-like feeling as possible. The use of real-world location gives the story a sense that it could happen to real people, as well, adding weight to their story. Some buildings from reality are showcased, including a transit station; these structures are modern, reflecting on the Japanese willingness to adapt international concepts and apply their own twist to things. Through some of these scenery stills in Tari Tari, more traditional structures, such as the Sakai and Okita residences, are depicted alongside stunning visuals of the entire region. This unique combination of real and fictional settings allows Tari Tari to portray a convincing, relatable story to its viewers, providing a setting that the characters fit well into, in turn amplifying the sense of realism within the story, although the impact factor in Tari Tari is ultimately a consequence of making use of a dedicated, fictional setting to amplify the characters’ situations in conjunction with a real world setting.

One response to “Revisiting Tari Tari: The architecture that talks back”