Distant Wishes: The school rooftop in Madoka Magica as a visual metaphor for the implications of being a magical girl

“We can only see a short distance ahead, but we can see plenty there that needs to be done.” —Alan Turing

While it may be a subtle component within Puella Magi Madoka Magica, the architecture and interior design aspects within the anime have a substantial role in setting the mood. Previously, the architecture within Tari Tari was the central focus, and Madoka Magica was briefly mentioned as another example of where architecture is able to impact the atmospherics within an anime. In Madoka Magica, however, the architectural elements are used to both deceive the viewers and alienate the characters from their settings to emphasise the anime’s point: that magical girls become highly detached from their surroundings. Beginning from the warm, brightly-coloured settings in the series’ openings and the girls’ frequent hangout spots, to the mechanised, predominantly metal construction in the industrial areas, the settings serve to draw a juxtaposition between the girls and their environment. This use of architecture and interior design is nowhere as apparent as in Mitakihara’s school rooftop, which Madoka and her friends frequent during lunch hour. The unusual combination of familiarity and distance come together at this unique location, acting as a visual metaphor for the intermediate stage of doubt and mystery that Madoka and Sayaka experience after befriending Mami and learning of the existence of magical girls. 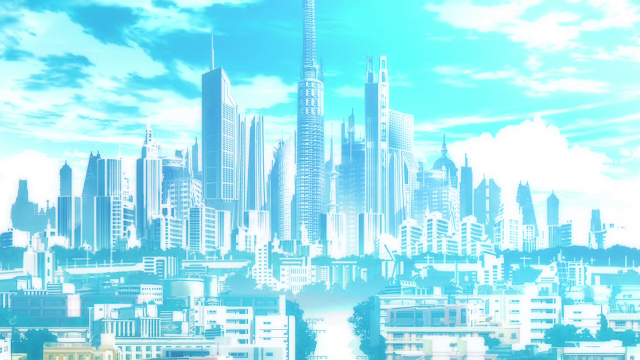 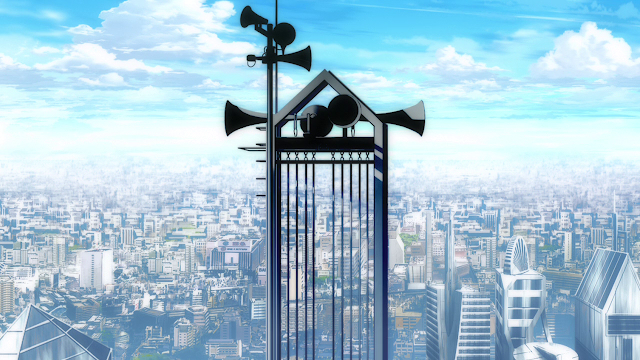 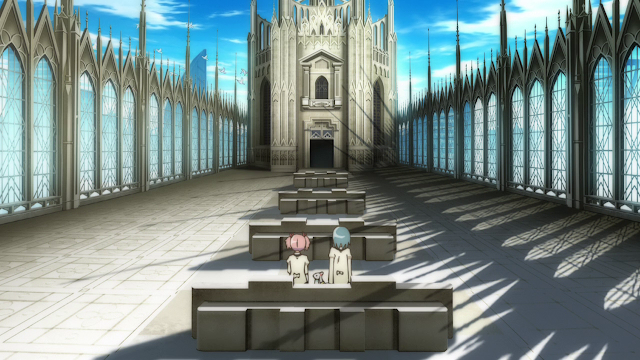 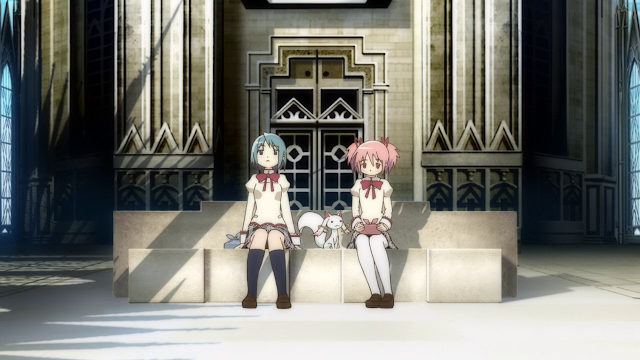 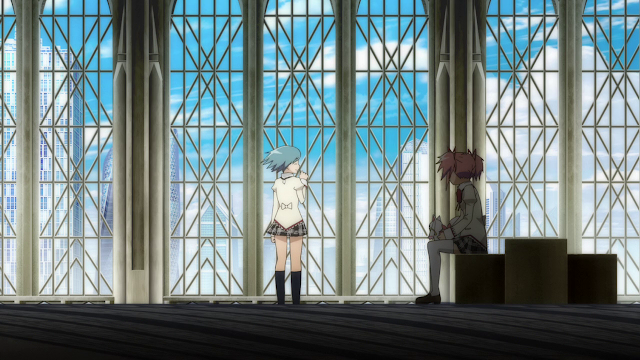 Given that the school rooftop is a highly prevalent location in anime, it is not unreasonable to surmise that the location might hold some significance. In typical anime, the school rooftops are used as a location for solitude by students; in Kanon, Yuichi and Mai train using bamboo swords on the school rooftops, while CLANNAD has Nagisa asking Ryou about joining the drama club. Students hang out on the school rooftops for lunch in Azumanga Daioh, go out there to vent off steam (K-On! Movie), or even discuss what it means to be idols (Locodol). Why the school rooftops are chosen is probably to confer some solitude, offering a tranquil spot amidst the hustle of an urban locale for individuals to relax or look back on things. In densely built areas, especially in Japan, the skyline might be visible, providing a distant backdrop for the events that occur in the school rooftop. This forms a juxtaposition; the school is a well-traversed, familiar location, but beyond their world is another, one that is perceived to be more unfeeling and detached. In Madoka Magica, when Madoka and Sayaka discuss their wishes up there, the locale immediately gives the impression that the girls are considering things that are equally as distant in a relatively friendly setting, subtly mirroring the fact that individuals become a part of that “distant” world once their education is complete. It would therefore be logical to be discussing the future (in this case, wishes) in a location where the familiar and the unknown are simultaneously visible and become things that must be considered. 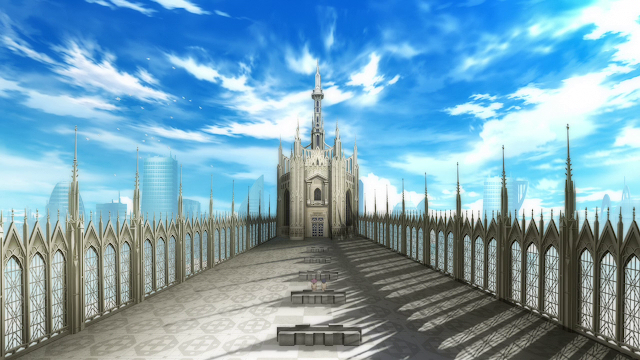 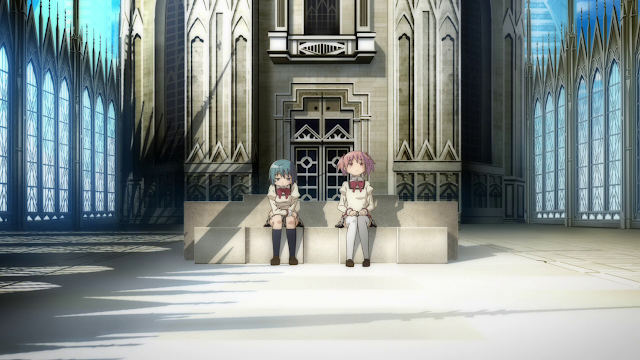 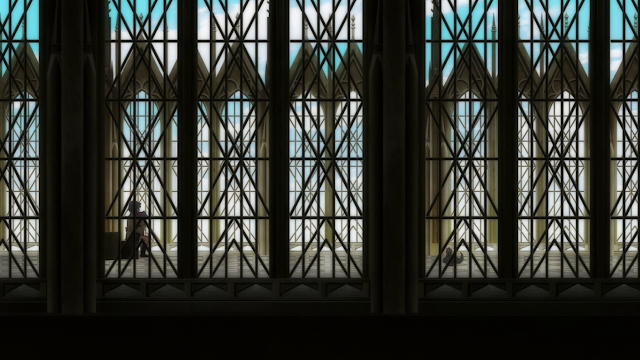 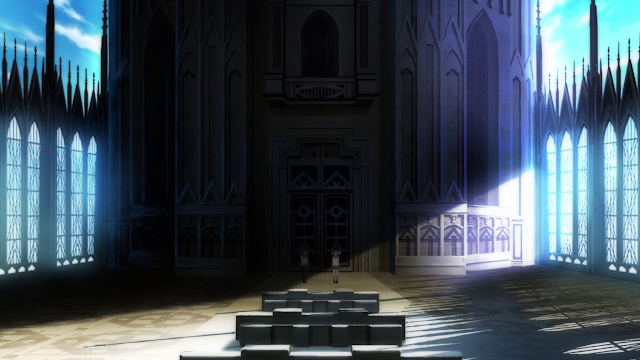 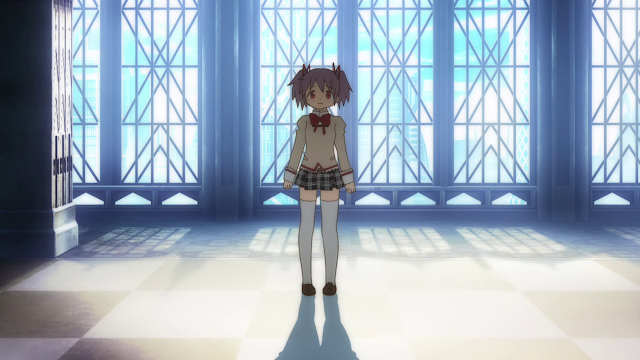 Ultimately, Madoka and Sayaka do not come to a final conclusion here, as Homura interrupts their conversation. The next time Madoka and Sayaka spend time together up on the school rooftop is after Mami’s death by Charlotte’s hands, and it is here that the setting truly becomes disjoint: as Madoka later learns, no one else will know of Mami’s death. The world is indifferent, apathetic to Mami’s fate, and this sense of detachment is reflected in the architecture, which coldly adjourns the scene. It is from here that Madoka Magica steps away from a traditional magical girl series and begins to depict the magical girl’s role as one of tireless, thankless effort, rather than the idealistic, optimistic approaches taken by more traditional anime. This element is subtly enhanced by the choice of architecture within Madoka Magica; locations gradually become more industrial and minimalistic as the series progresses to emphasise that the girls are alone. Their settings (and the people that inhabit them) will only observe without compassion, leaving the magical girls alone as they struggle to come to terms with what their decisions led to. These visual elements are seamlessly integrated with Yuki Kajiura’s “Sis Puella Magica!” (Let’s become magical girls!) in several scenes. “Sis Puella Magica!” is a cold piece that accompanies scenes explaining details behind the magical girls, to give the sense that being a magical girl entails much more than is immediately apparent, and like the song, is a role filled with enigma that, paired with the visual elements, produces an atmosphere that leads even the viewers to ask themselves: is there something you want so badly that it’s worth putting your life in danger for?