“Maybe some arm shots or leg shots. Maybe, you know, try to stay away from that head.” —FPS_Doug, Pure Pwnage

For this Firing Range, I’ll be doing a talk on Maya Kyoudou’s preferred loadout from Sabagebu!, and in keeping with Maya’s lack of sidearms and other equipment, I’ve just rolled with the M4A1 with a random assortment of squad specialisations. In Sabagebu!, Maya runs with the M4A1 with Close Quarters Battle Receiver and an XPS variant of an EOTech holographic sight. The shortened barrel makes the weapons more compact and allows it to excel at close quarters, so for gathering footage here, I’ve stuck primarily with close-quarters engagements. To mirror Maya’s loadout, I’ve equipped my M4A1 with the holo sight and a flash suppressor. In Battlefield 3, the M4A1 is considered to be the best all-around carbine for the engineer class, with a high rate of fire (800 RPM), low recoil and fast reload time (1.85 seconds if there’s a round chambered, or 2.48 seconds from empty). In close quarters, this weapon is roughly the same as an assault rifle with regards to damage output, but thanks to the low recoil, the M4A1 remains useful at longer ranges, allowing one to perform reasonably well in a variety of situations. Outfitted with the flash suppressor and the holographic sight, I found that the flash suppressor did not do too much for the weapon, as the vertical recoil is already quite low. The holographic sight, on the other hand, helps with longer range aiming, affording a bit more magnification while retaining the same aiming speed as the red dot sights. At close quarters, the weapon is quite accurate even when fired from the hip, and allowed me to hold my own against assault rifles and even shotguns. 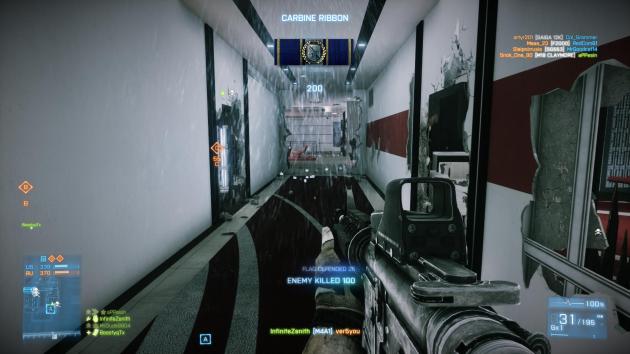 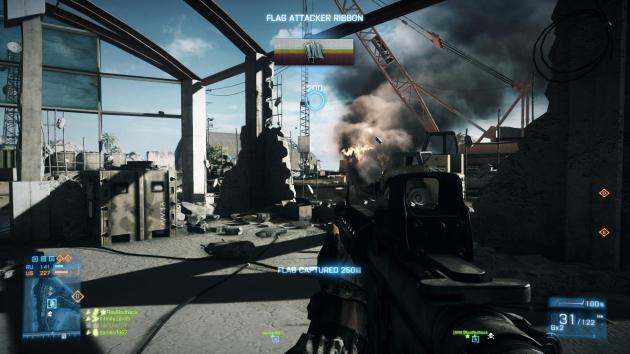 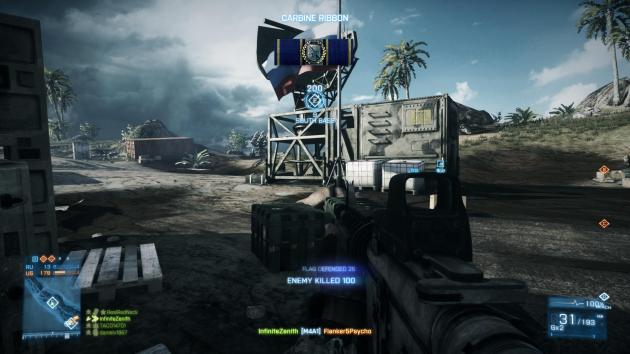 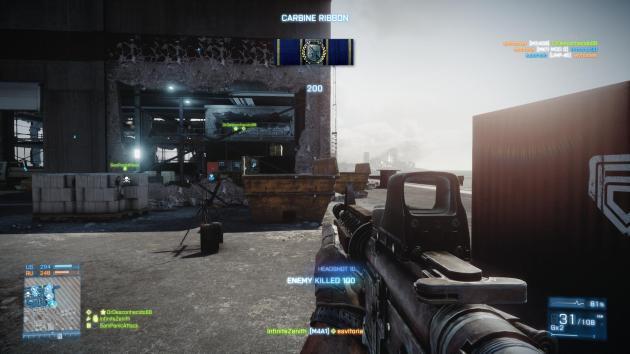 What is the verdict in Maya’s loadout? One would be inclined to say that Maya probably is just really unlucky, because the M4A1 performs quite well. Except at extreme ranges meant for sniper rifles, I was able to perform quite consistently at close and medium ranges, scoring headshots on targets up to 50 meters away and holding out at close ranges against even shotguns. Through this loadout, I warmed up to the holographic sight, as well. The flash suppressor was chosen to best mimic the Close Quarters Battle Receiver; the M4A1 in Battlefield 3 has the standard barrel. Flash suppressors are intended to reduce muzzle flash and make one less visible on a map; as well, they reduce the vertical recoil. The already low recoil means that typically, I would probably prefer a heavy barrel to improve long-range engagements (the hip-fire accuracy can be supplemented with a laser sight, which I did not equip for this discussion). Ultimately, the M4A1 is an immensely versatile weapon, and Maya’s loadout is effective in and of itself: her infamous propensity to get shot down first is a part of the humour in Sabagebu! and does not suggest that her weapon and customisation was a poor choice.