4 Comments Posted by infinitezenith on November 28, 2014

“Never do anything yourself that others can do for you.” —Agatha Christie

Kyoto Animation’s adaptation of the Hyouka (literally “ice cream”) novel was released in 2012, following one Houtarou Oreki’s reluctant agreement to join his high school’s Classic Literature club at his older sister’s request to prevent the club from being disbanded. Though he initially finds their activities to be an unnecessary use of his time, together with Eru Chitanda, Satoshi Fukube and Mayaka Ibara, he nonetheless lends his natural capacity for deducing the solution to problems the club encounters, ranging from the mysteries behind Eru’s uncle, events associated with the school’s Kanya festival or the infamous “Juumonji” case during the Kanya festival itself. Each mystery is down-to-earth and realistic, being set in a self-contained arc that flows reasonably well into the the subsequent arc, with much of the anime being about the cultural festival itself. Judging from the mundane, everyday nature of the mysteries in Hyouka, one must surmise that the original Hyouka novel would have been remarkably dull on sheer virtue of the mysteries: instead, the Hyouka novel is more focussed around solid character dynamics, especially in regards to Houtarou’s character how he changes after meeting Eru, and how this change underlies the central message in Hyouka. 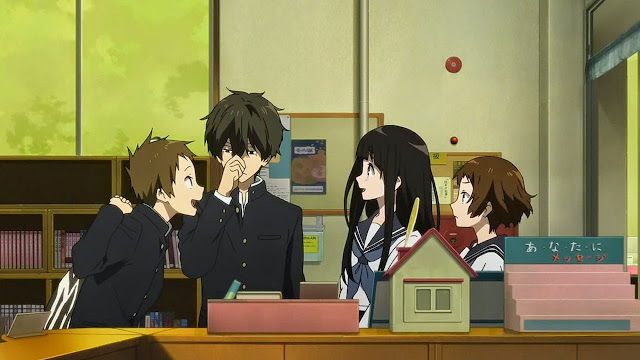 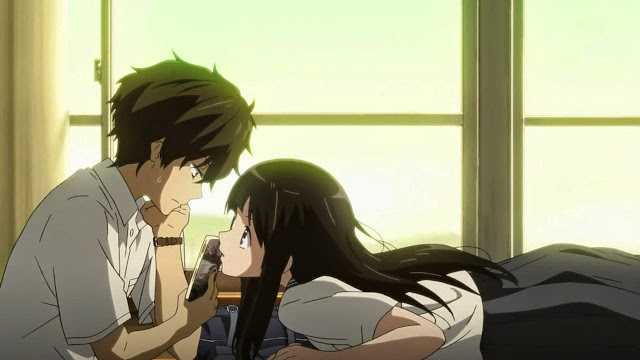 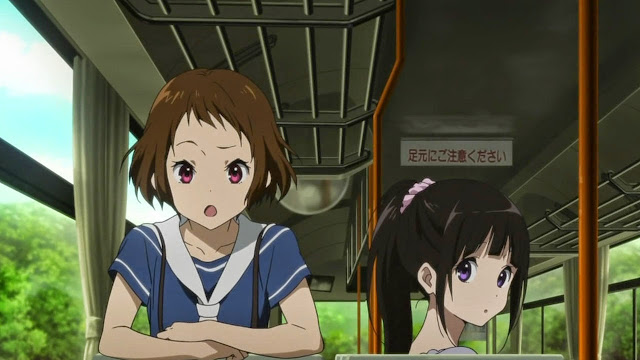 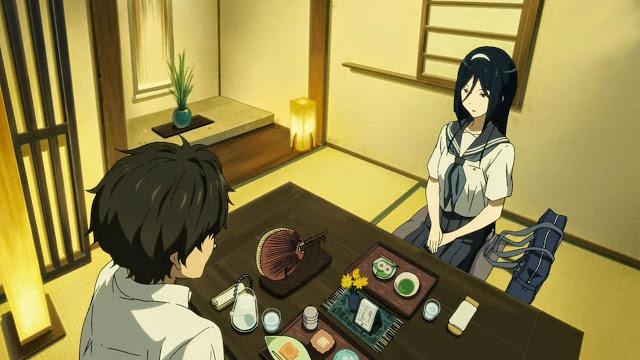 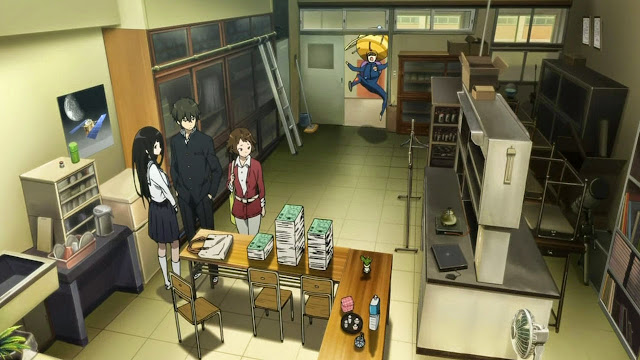 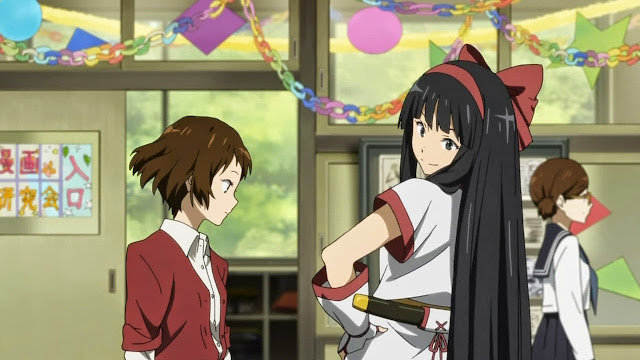 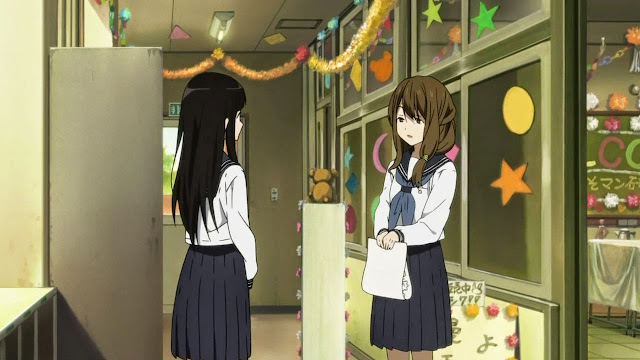 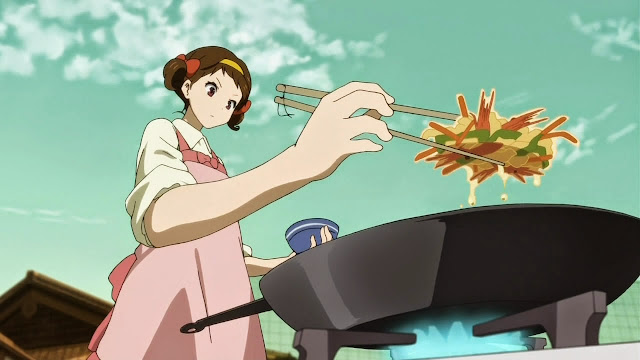 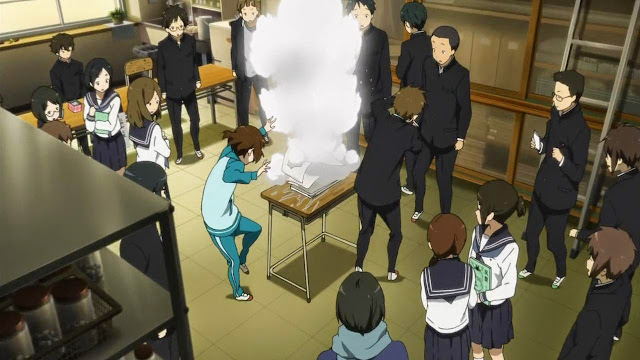 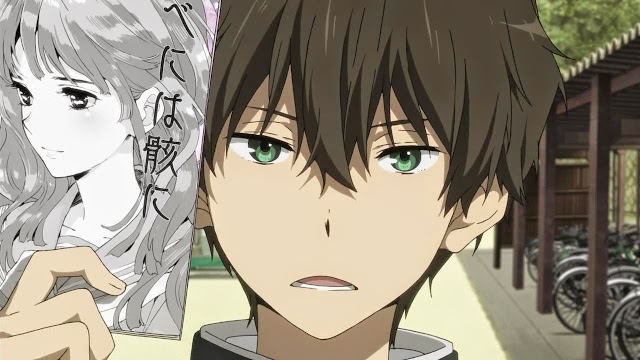 Houtarou is presented as a pragmatic individual who prefers not to put more effort into doing anything than is necessary, and where required, finish the task at hand such that he may resume inactivity as quickly as is possible. This ‘energy conserving’ way of life belies his natural talent for deducing the answers to a given problem. Although he considers this to be trivial, dismissing it as luck, others constantly regard this ability as something special. Eru constantly praises him for it, Satoshi envies him and Fuyumi Irisu, a second-year student, makes use of it to solve a problem surrounding a film intended for the culture festival. Through Houtarou, Hyouka illustrates that friendship is a powerful catalyst that can help individuals recognise and use their talents, as in Houtarou’s case: while he initially refused to do anything considered extraneous, Eru’s enthusiasm (and his early desires to play along to spare himself a future of further effort) eventually does lead Houtarou to take an initiative and help out his friends in the way that he can. His decision to solve the mystery behind Mayaka’s Valentine’s Chocolates is a major example of how his outlook on life has changed, and through Eru’s encouragement, he begins to exert effort with the knowledge that it is for his friends’ sake. 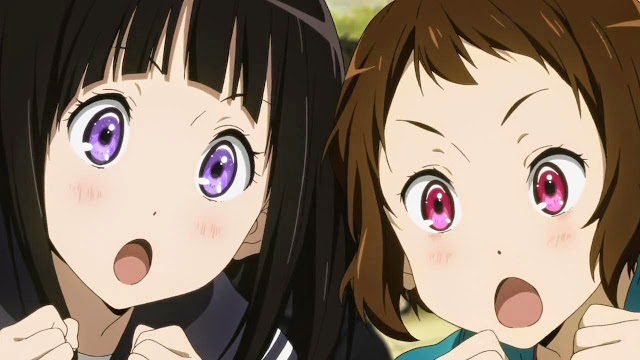 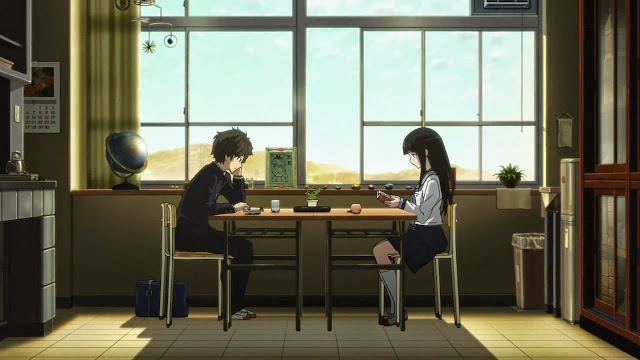 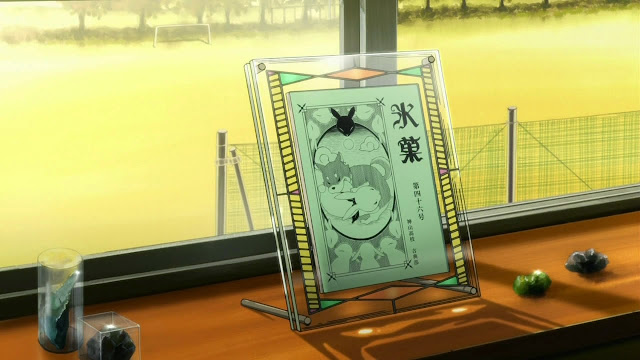 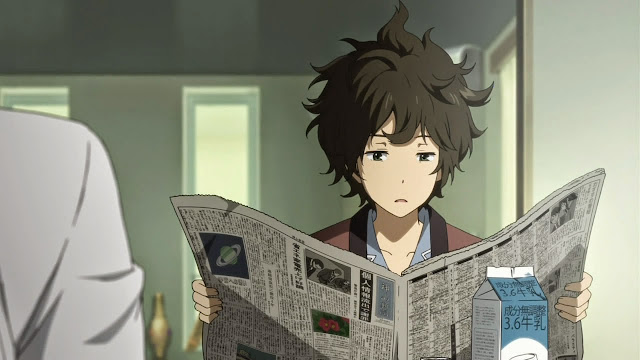 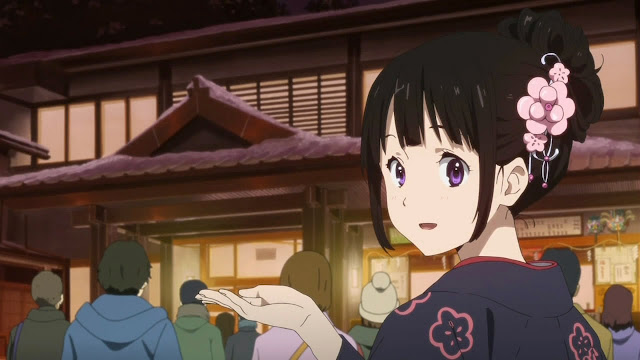 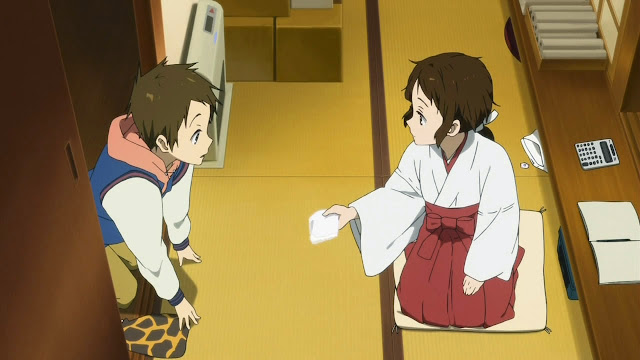 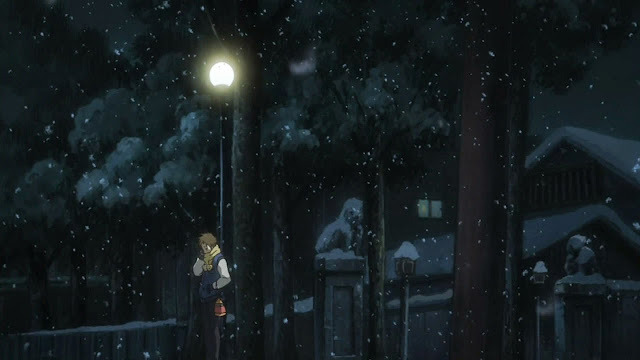 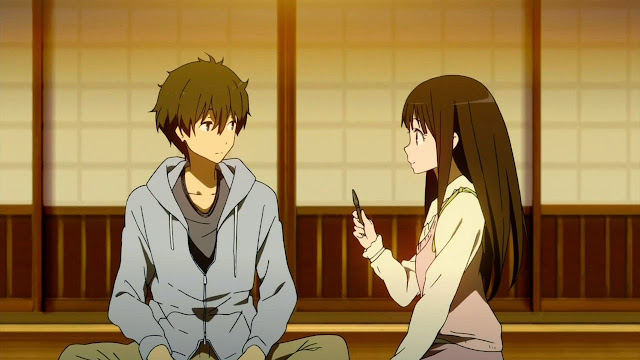 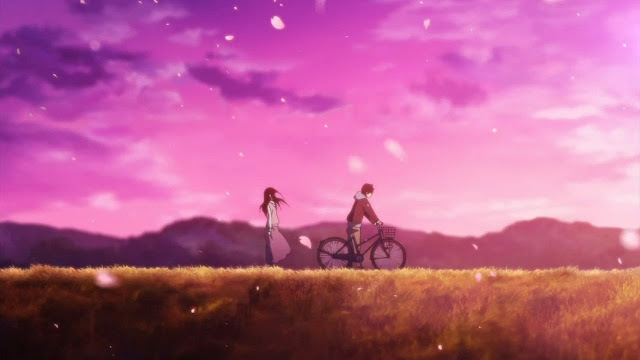 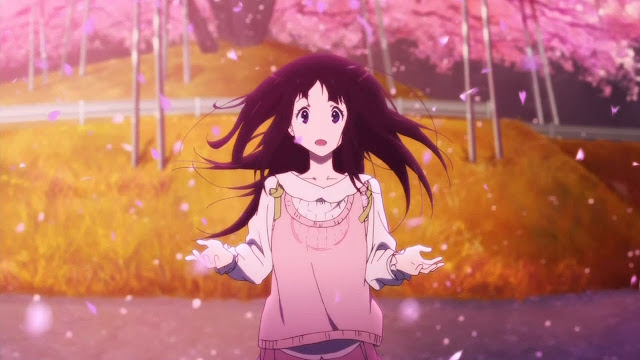 On the whole, Hyouka‘s strengths lie with the characters and their growth, rather than the mysteries that Houtarou is tasked with solving. With Kyoto Animation at the helm of production and animation, the setting provides a beautiful setting that enhances the credibility of the character dynamics. Besides everyday mysteries, the familiar setting in Hyouka allows the story to deal with things such as romance and the future: in particular, these two elements were subtly present throughout the anime but only became major topics as the series draws to a close. Mayaka and Satoshi, for instance, seem quite close but only reveal their feelings (or nature thereof) for one another near the end. Similarly, the growing feelings between Houtarou and Eru are only subtle (such as blushing when the other in close proximity), culminating with a heart-to-heart talk on their respective views for their futures and how, despite their developing feelings for one another, their divergent paths may not permit a relationship . Its presence in the background, rather than forcible attempts to have it take centre stage, makes Hyouka enjoyable to watch: as with reality, romance isn’t always at the forefront of things, and instead, is a part of the scenery that is sometimes noticed. As it stands, despite its seemingly complex premise, Hyouka is by no means difficult to understand and is ultimately an entertaining series to watch for being able to keep the viewer’s interest in what is to happen next, thus being suited for fans of the slice-of-life genre and are looking for a different take on it (here, with a side of mystery).