A preview of Gochuumon wa usagi desu ka? season 2 through the manga

“Is your heart ready to hop? Even if I pretend to be lost in thought, come a little closer! I won’t let you know too easily; it’s a secret that I like you this much!” —Daydream Cafe, Petit Rabbits

Early in November, rumours that there would be a second season of Gochuumon wa usagi desu ka? began circulating on Twitter, complete with images and what appeared to be official media supporting this claim. At present, nothing official has been announced yet, and as such, whether or not there will be another installation of Gochuumon wa usagi desu ka? will remain as something for the future. This anime originally aired during Spring 2014, and was centered around Cocoa Hoto’s transfer into a classical town resembling modern-day Colmar, France. As is common to the moé subgenre, Gochuumon wa usagi desu ka? is characterised by a lack of story, and an emphasis on how there can be joy in even the most mundane aspects of everyday life, whether it be baking bread, making coffee cream art, a day at the pool, helping a writer out of a slump or Christmas shopping.  This trend was perpetuated back when K-On! was released, and while the more vehement viewers cite moé as the single detrimental aspect of the industry, the fact remains that such anime continue to be released season after season because they represent a break of sorts from the more focused anime a season may offer, helping people relax after a long day’s work. A second season has been announced, and while the airing dates are not known, that raises the question of what a second season will entail. 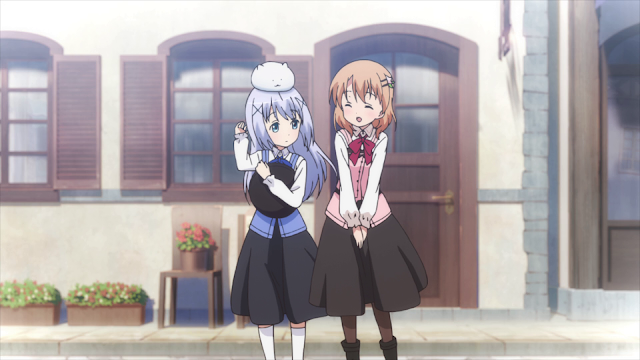 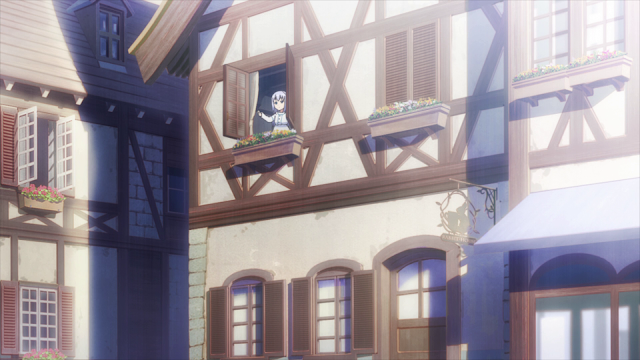 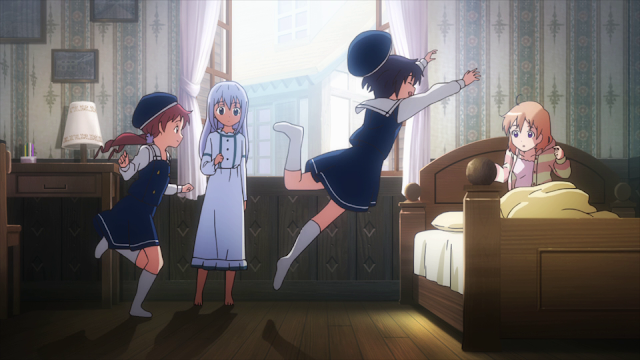 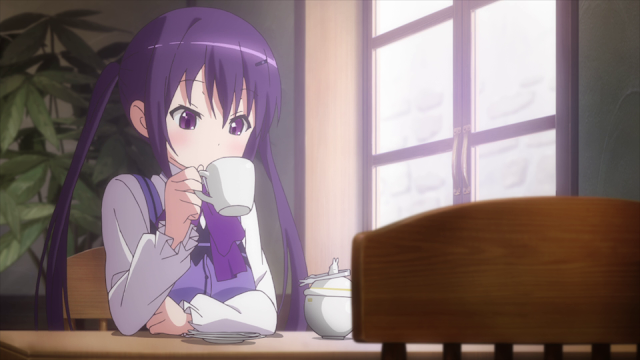 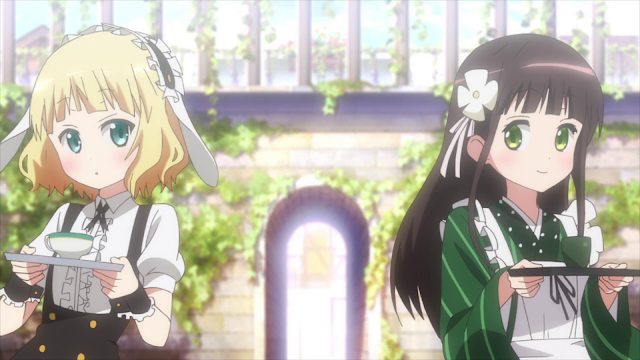 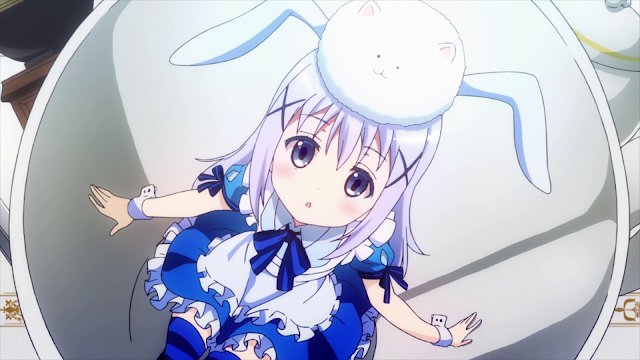 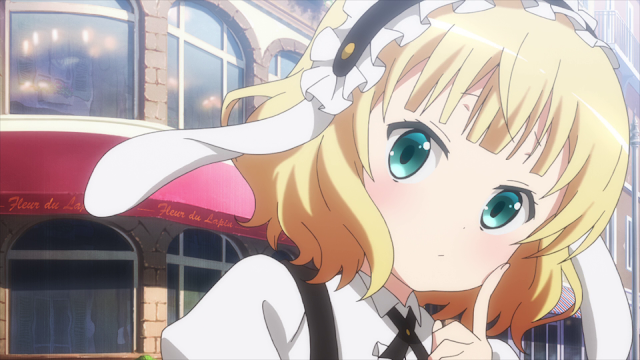 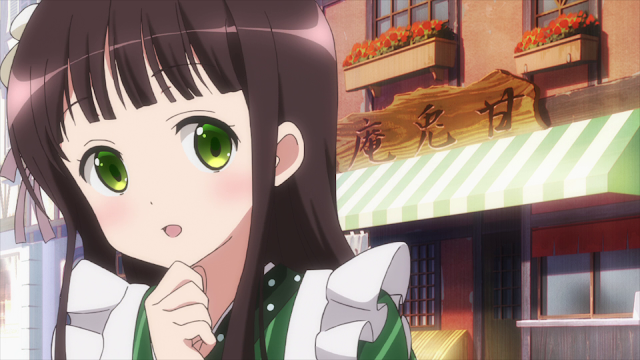 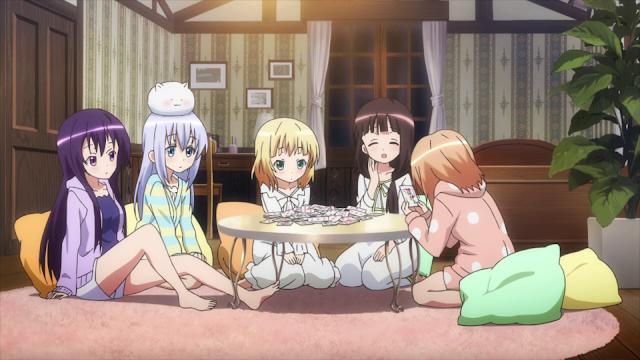 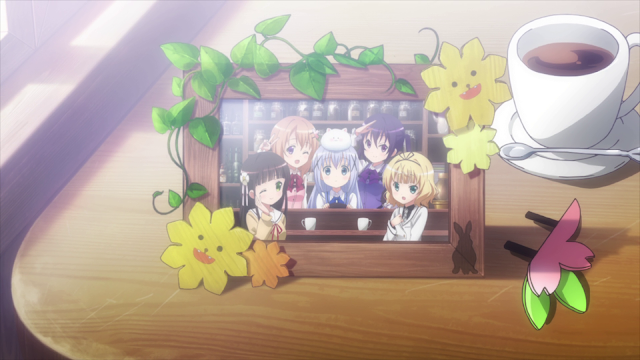 The manga is presently up to volume four, and it appears that Gochuumon wa usagi desu ka?‘s first season spans the first three volumes. These are estimates, but given that the events in the fourth volume and later do not appear in the TV series, it is quite reasonable to speculate that any sort of second season will begin here. Events will include Cocoa and Chino visiting Rize after the latter sprains her ankle. In visiting Rize’s home, the girls roleplay as maids and manage to have a good old time. Aoyama later encounters troubles with her writing, and attempts to write a story with Cocoa and her friends as protagonists. While everyone competes to be the main lead, their activities eventually inspire Aoyama to begin writing. Depending on pacing, there’s enough material her for around one to two episodes. Cocoa’s sister (a hitherto unintroduced character) also is set to make an appearance, prompting Cocoa to take on a more serious demeanor to show her sister that she’s matured. While waiting for Cocoa’s sister to show up, an unexpected character makes an appearance. After some mishaps and more comedy, it turns out this unexpected guest is Cocoa’s sister, who had disguised herself to make a more dramatic appearance and decides to stay for a few days. Because this spans a few volumes, this arc could cover anywhere from three to four episodes, and should it ever take an animated form, I would probably melt from the volume of adorable moments that is condensed into this space. The last chapter in volume four deals with back-to-school stuff, with Chiya feeling disappointed that Cocoa won’t be lonely even if they were in different classes, and after Rize, Chino and Sharyo go shopping for pencils, they run into Chiya, who recieved an ominous text from Cocoa. However, when Cocoa arrives, she makes up with Chiya on the spot, and everyone resumes their school year (this is at most one more episode). With the volume exhausted, the speculation ends here, and these predictions amount to around seven episodes at most. From a personal perspective, a second season will probably become a reality once the manga progresses forward a little more, but for the present, it’s still fun to guess at what future installments could hold: just from reading the manga, I would be quite happy to see an animated adaptation of these adventures.