7 Comments Posted by infinitezenith on December 18, 2014

“I realize that humor isn’t for everyone. It’s only for people who want to have fun, enjoy life, and feel alive.” — Anne Wilson Schaef

It’s been a while since I’ve done a talk on Strike Witches, but allow me to reopen the topic with the first installment of Operation Victory Arrow, which follows Gertrude, Erica and Minna’s adventures in Germany between the second season and the movie. After a training exercise, Erica’s sister, Ursula, arrives for a visit, and comes bearing gifts of new hardware, including the Me 262 etherjet Striker, Bordkanone 5 auto-cannon and Germanic-style clothes. Despite Erica’s objections, Gertrude gives it a test flight and is satisfied, but Erica’s mood soon deteriorates. However, a massive Neuroi attacks; both Gertrude and Minna are overwhelmed, but find themselves saved by Erica and Ursula. Back in Fuso, Yoshika and Michiko read a letter from Minna et al., detailing their adventures in Karlsland. The first episode of Operation Victory Arrow, dealing with the Germanic characters, proved to be a remarkably entertaining episode that was well worth the wait: originally aired in Japanese cinema back in September, the home release was on December 12.

Aside from the fanservice aspects, St. Trond’s Thunder is about Erica’s mistrust with new technologies, leading to dissatisfaction with her sister’s works. There is no real prior animosity between Erica and Ursula: the former warmly welcomes the latter upon arrival, and the atmospherics only shift after Ursula reveals that she’s brought an improved, safer jet striker. Despite these improvements, Erica immediately takes a disliking to the unit as a consequence of what had happened during the second season. Her concerns fall upon deaf ears after Minna decides to go ahead with the test. Things further sour when an experimental two-witch striker unit fails when Erica pushes the unit beyond specifications, forcing Erica to save Ursula. From there on out, Erica takes on a moody, sullen demeanor, feeling that the new technology is unfeasible and dangerous. However, faced with certain calamity, Erica overcomes this mistrust, allowing her to resolve things with Ursula and save Gertrude and Minna from an unnaturally powerful Neuroi that arrives. Although Erica might be seen as selfish, her reaction to new technology is quite natural, as cutting-edge technology possesses a set of unknowns that could very well prove to be hazardous. However, this is not to say that one should reject advances in technology, and as Erica discovers, sometimes, one must take a chance on new concepts in order to protect the things that matter to them. As the technology in our society continues to advance, we must learn to understand its advantages as well as its risks, and more importantly, figure out how to best use a technology for its intended purpose. 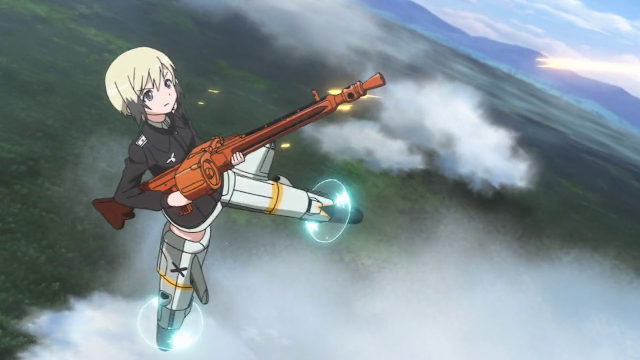 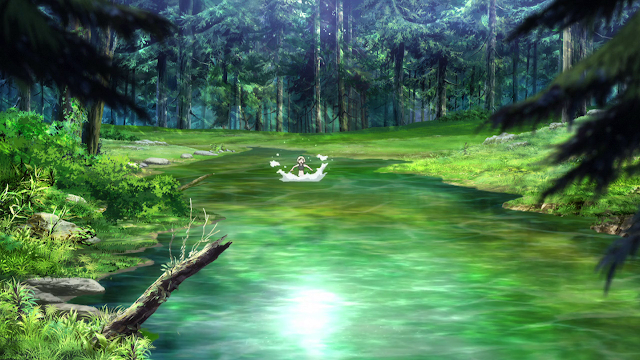 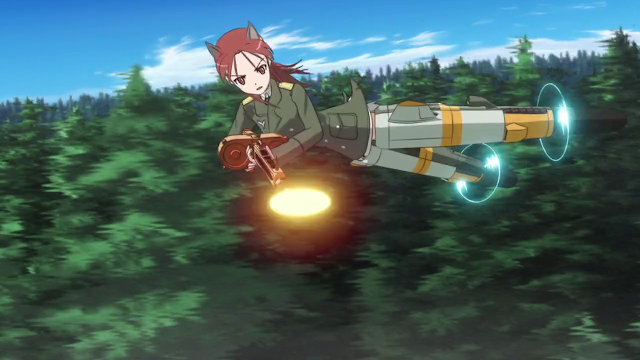 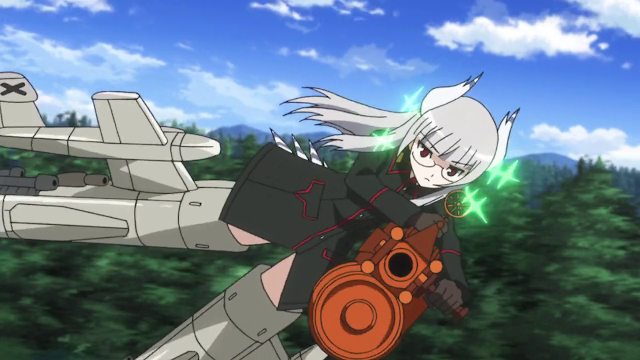 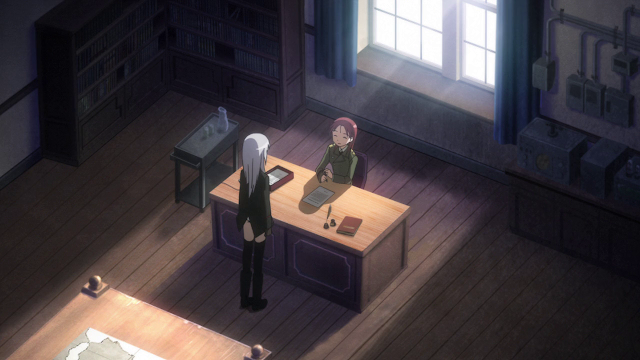 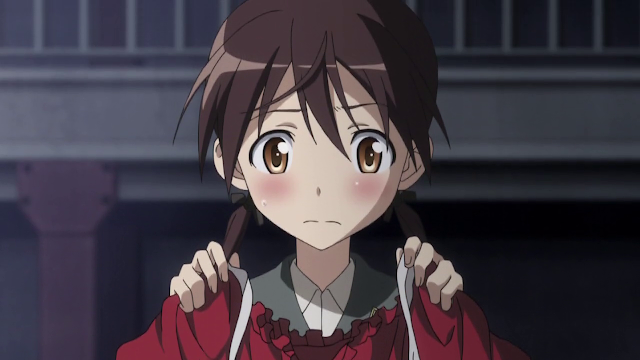 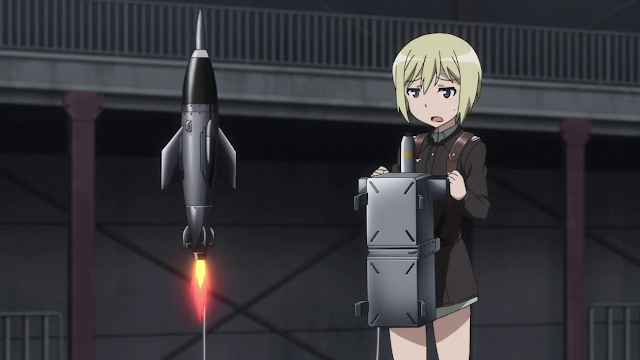 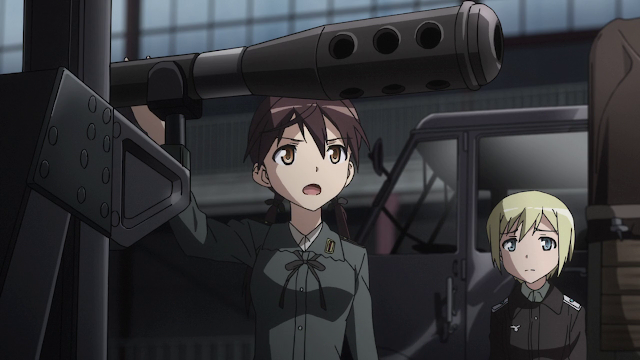 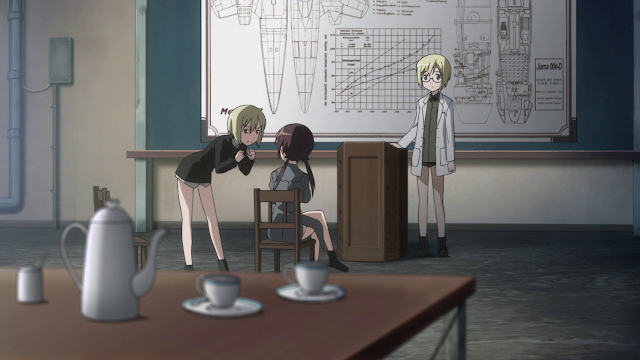 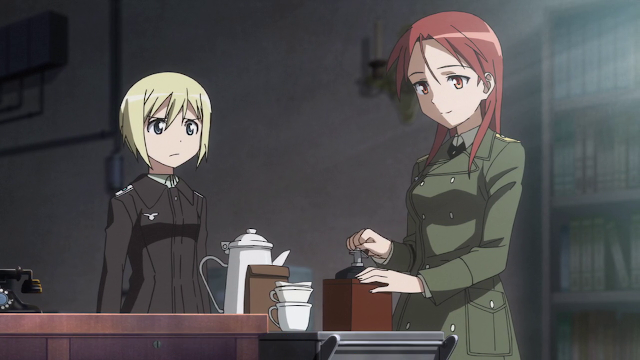 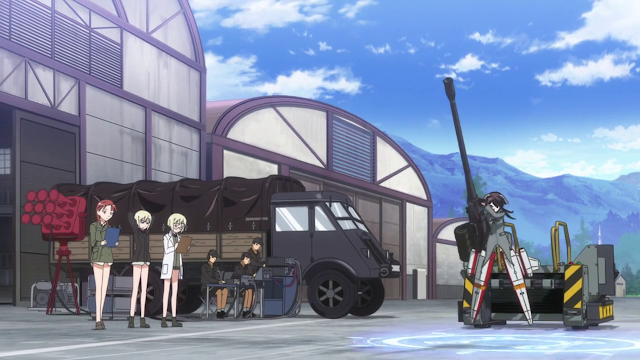 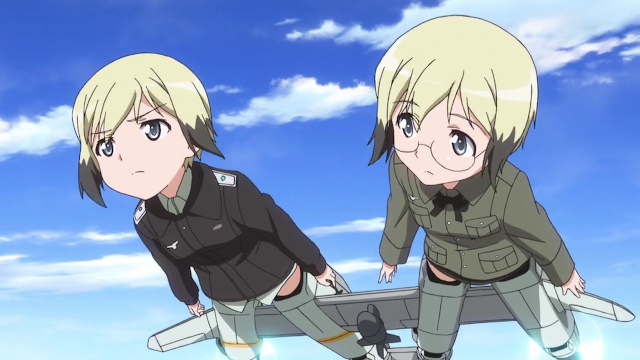 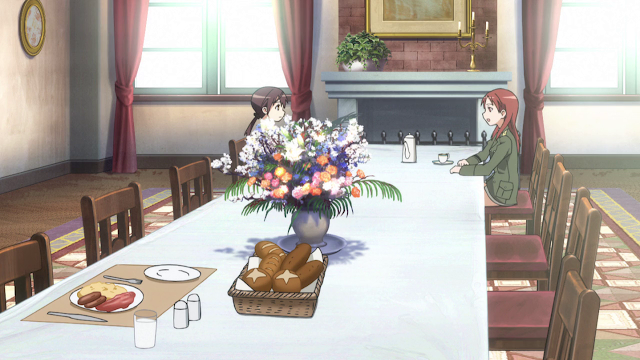 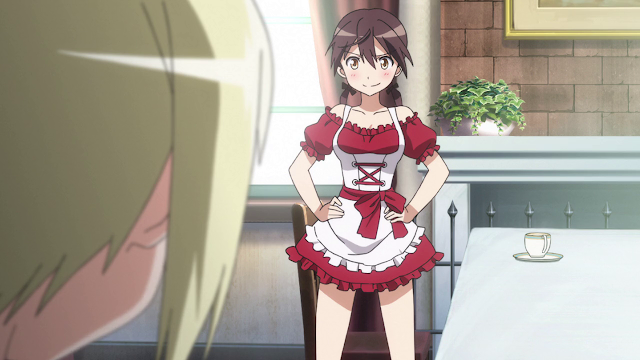 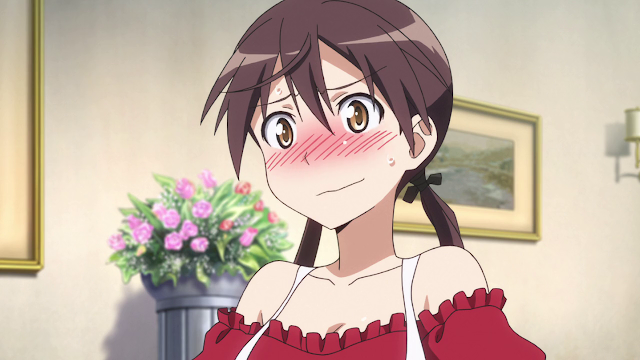 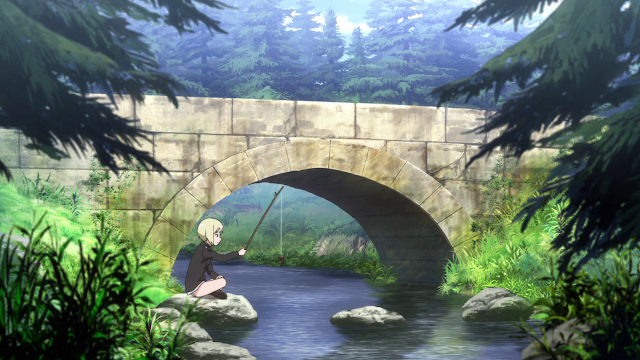 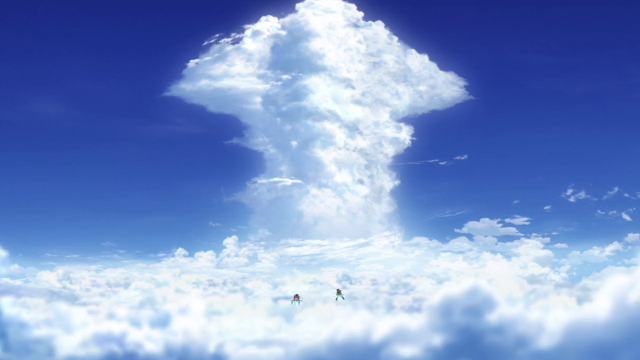 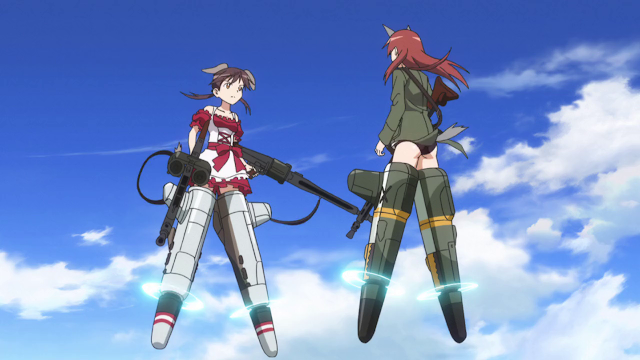 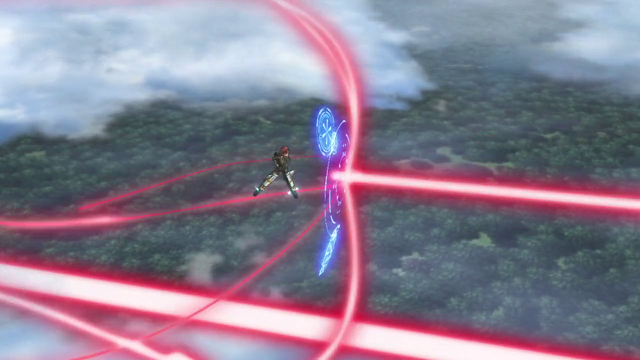 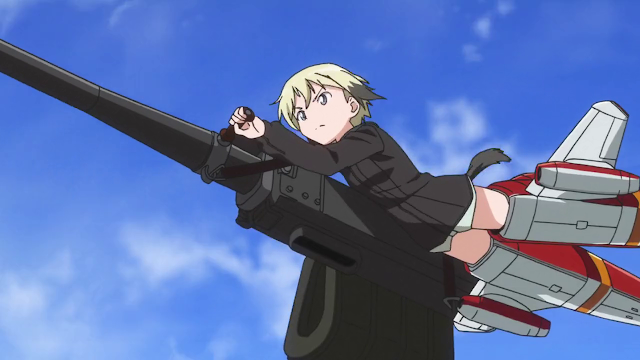 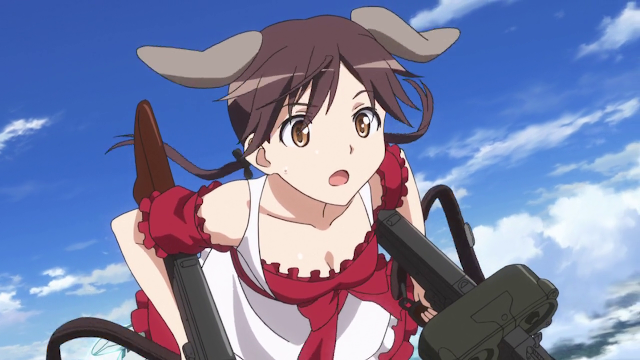 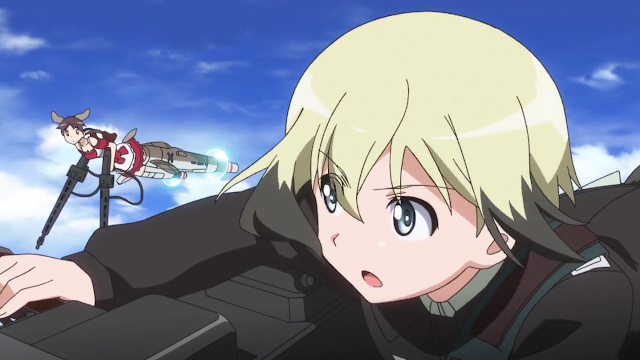 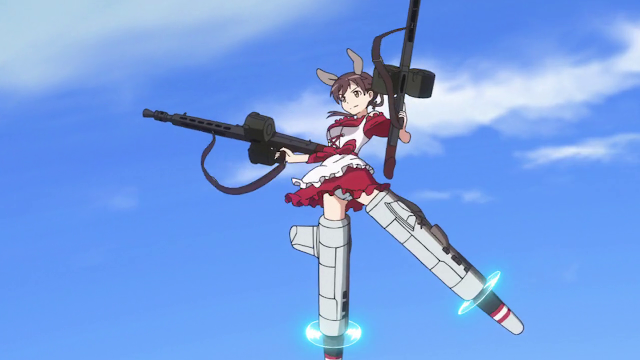 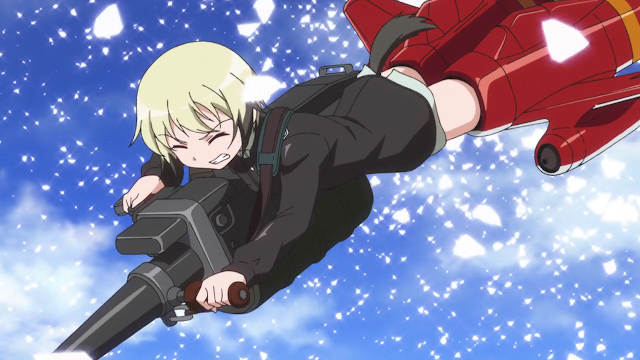 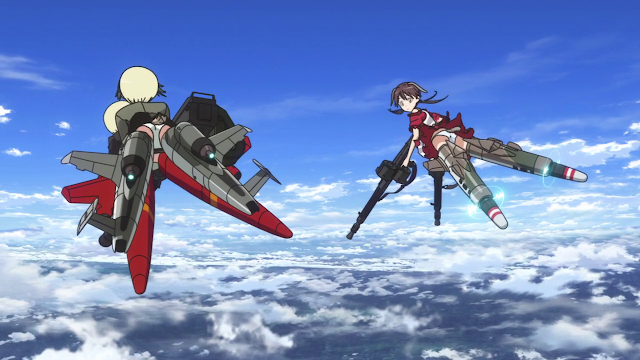 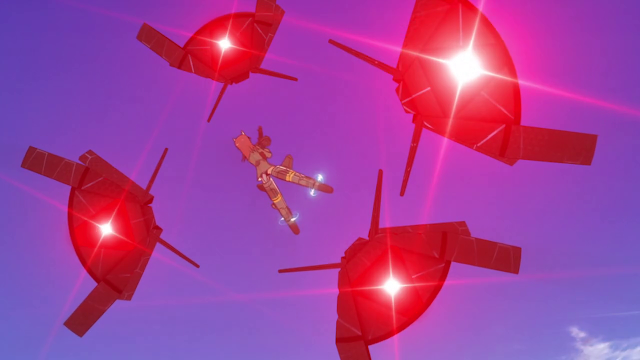 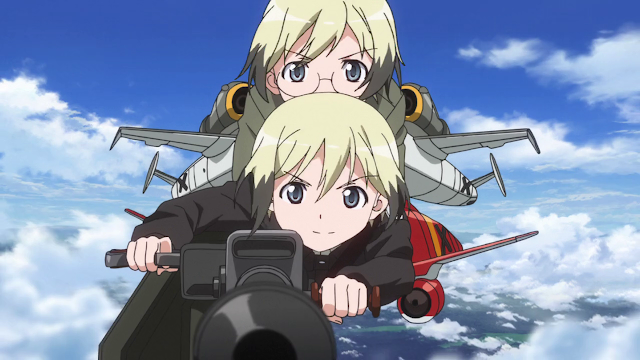 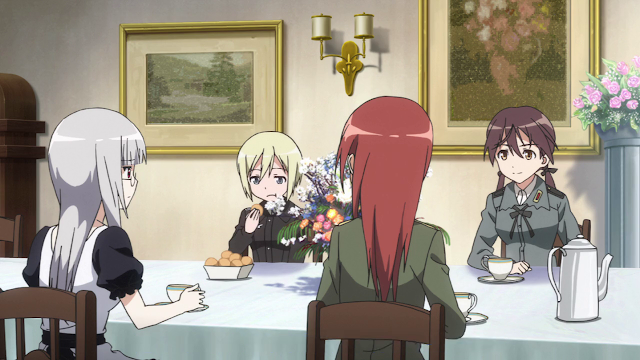 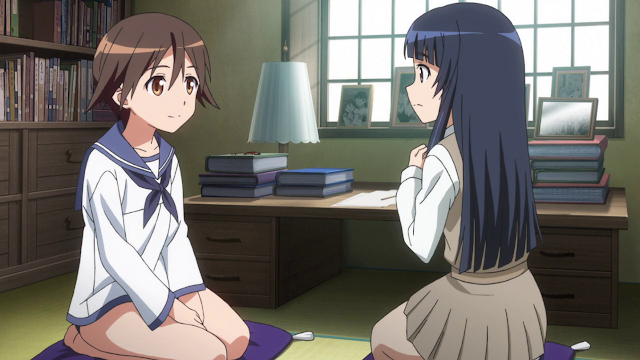 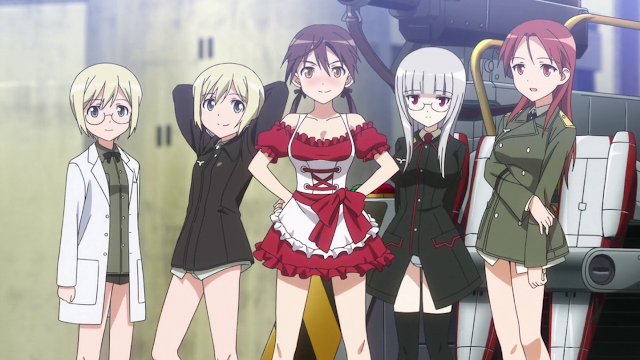 It may come as surprising to some that the themes of new technology can be explored even in something as facetious as Strike Witches, but as a universe where supernatural magic interface with fantastical technology, the topic does lead to the question of how technology is perceived in the Strike Witches universe. St. Trond’s Thunder starts off Operation Victory Arrow with Erica’s gradual acceptance for newer equipment. Aside from this aspect, I thoroughly enjoyed Operation Victory Arrow, as I am a fan of the unique world that Strike Witches is set in (to the extent where I can say that I would have enjoyed this series to the same level even in the total absence of the pantsu that this anime is infamous for). Throughout this first instalment, the artwork, animation and sound retains the quality and stylistic elements seen in both the second season and the movie. The battle sequences (both the mock training and the fight against the Neuroi) are thrilling to watch, being choreographed with the same intensity as viewers have become accustomed to. However, as a member of the Strike Witches series, this is something that is designed for fans to enjoy, and individuals whose interests lie outside of Strike Witches probably will see this as 30 minutes poorly spent. With the first of the episodes now complete, attention turns towards Goddess of the Aegan Sea, the second Operation Victory Arrow episode that will premier in Japanese theatres on January 10, 2015. Assuming another three-month wait, the home release for the second episode will probably be in March 2015. The final episode is set for premier in Japanese theatres on May 2, 2015, so a conservative estimate for the home release in somewhere in August 2015, and readers can bet their bottom dollar I’ll be doing talks for the other two episodes, as well.