“The well-satisfied customer will bring the repeat sale that counts.” —James Cash Penney

I believe this is the first time I’ve done a talk on the Winter Steam Sale: last year, I picked up Trials Revolution and Bioshock Infinite during the sale: the latter went on a 75 percent off sale, and I sold one of my old Salvaged TF2 crates for twenty dollars, which gave me sufficient funds to pick up Bioshock Infinite. At the time of writing, I’ve beaten the latter, and I’m probably a quarter of the way through the former, which is a consequence of the classic “Steam sale allows players to have more games than they can realistically play” syndrome. It’s Winter 2014 now, which means now it a good time as any to consider which of the titles I have actually made a substantial amount of progress in. The answer is not surprising: “very little”: between The Stanley Parable, Wolfire Overgrowth, Receiver, Skullgirls, Tomb Raider: Underworld, Magicka and Borderlands 2, I’ve played through and gotten several endings in The Stanley Parable, gotten to chapter 3 in Magicka and are presently level 12 in Borderlands 2. I’ve also become accomplished at reloading the weapons in Receiver, and as Overgrowth is still in development, I haven’t played through it much. Skullgirls and Tomb Raider remain completely untouched, and I added Crysis Warhead, Go! Go! Nippon! ~My First Trip To Japan~ and DEFCON to my library through the autumn Adventure sale. Because I love shooters, Warhead is done, and I’ve also gotten halfway through Go! Go! Nippon!, so I should have some talks for those out at some point in the future. 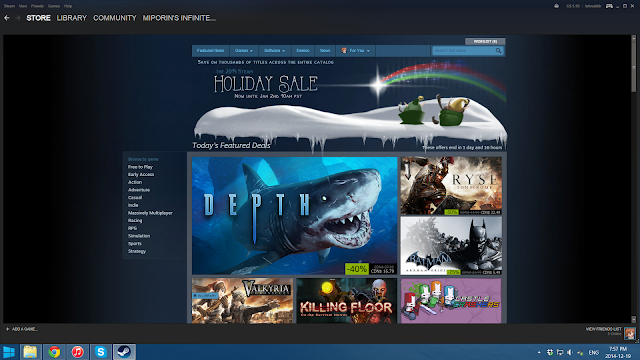 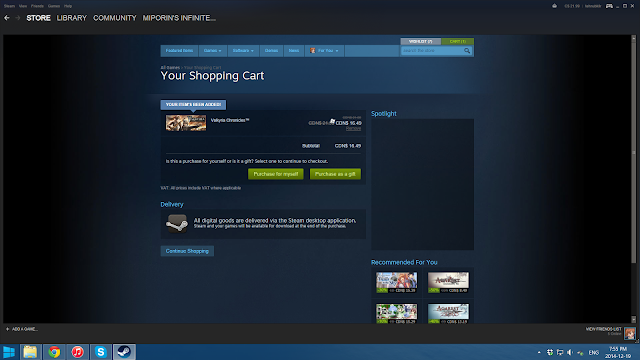 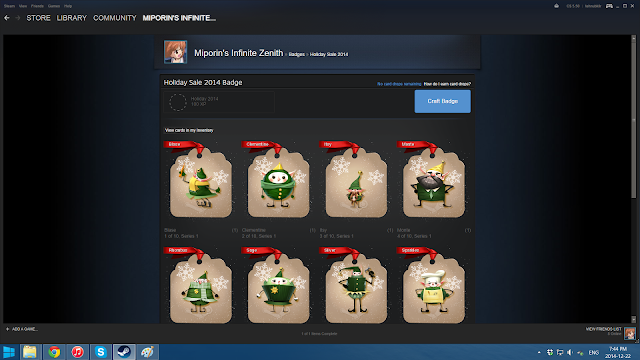 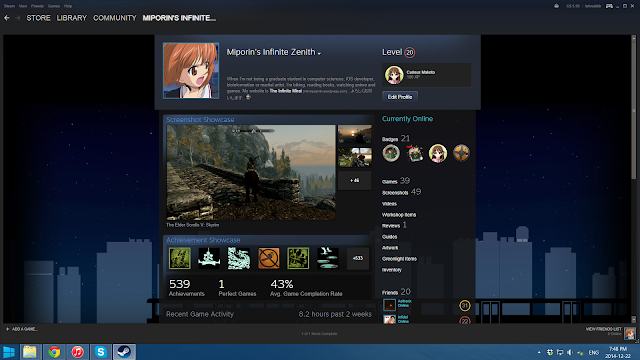 One would imagine that, with such a vast pile of games, I would probably pass on the Winter 2014 Steam Sale, and they would be correct, were it not for the fact that Valkyria Chronicles went on sale for 25 percent off on December 19. I’ve been interested in playing this game for quite some time (ever since I watched the anime last summer), although it had been available for the PlayStation III only. Back in November, a PC port changed all that, and the game is supposed to handle quite well on the PC. To this end, I aim to complete Tomb Raider before Valentines’ Day so that I may begin Valkyria Chronicles after that. The game is supposed to have around 40 hours of game time, so this will be fun, and I anticipate beating it (hopefully!) by the end of summer 2015. If I make it in a reasonable ways by the time the 2015 Steam Summer Sale rolls around, I’ll probably pick up one of Wolfenstein: The New Order or Call of Duty: Black Ops as my summer shooter, but we’ll see what happens. What I do know is that it’s time to roll out with the Edelweiss and decimate any Imperial forces that I encounter. On another, unrelated note, I’ve finally reached level 20 in Steam, and my remaining focus now is to acquire a level 5 Go! Go! Nippon! ~My First Trip To Japan~ badge for the sole purpose of bragging rights.