Actions Speak Louder Than Words: On the limitations of analysing familial dynamics in Girls und Panzer through dialogue

It’s not what my words mean underneath, but what I do, that defines me.

The English idiom, that actions speak louder than words, is a familiar one: its base meaning is quite simply that action is, if not more meaningful, at least more noticeable than just idle talk. After all, action and the will to act, denote a commitment to one’s promises, without which, the words merely become that’s quite devoid of meaning. Anyone can say something and intend for it to have meaning, but without the action component, to see something through, there is no meaning behind these words. Consequently, when there is an attempt to conduct literary analysis based on the words behind something, one must be skeptical as to whether or not anything meaningful was said at all. Thus, when the topic of family structure and interactions in Girls und Panzer is brought up, one must wonder whether or not the choice of words and speech patterns can lend themselves to the bigger picture, and in particular, there is one editorial out there that fails completely to make its argument relevant relative to Girls und Panzer. 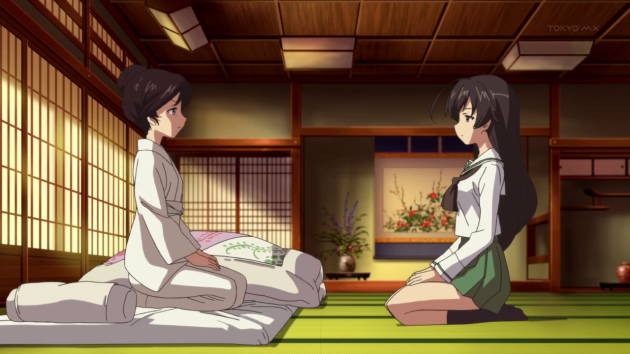 In Girls und Panzer, parental approval of their progeny’s interests and decisions is not something that was missed by audiences. Earlier, I had elected not to discuss it because this aspect was secondary to the anime’s core message of cooperation, teamwork and sportsmanship over the single-minded pursuit of victory. After all, this situation was resolved for Hana rather more quickly than it had been for Miho: Girls und Panzer shows that the former’s mother, Yuri Isuzu, would go to those lengths and disown Hana for deviating from the family path, paralleling Miho’s own situation. In the aforementioned editorial, it is mentioned the manner in which Yuri addresses Hana (through a more formal suffix) is reflects on how the Japanese language can provide insight into relationships merely based on how people address one another. An intrinsic part of the Japanese language, the editorial argues that Yuri’s speech patterns indicates her desire of upholding a proper, formal image, and that this desire is imparted upon Hana. Thus, when Hana expresses a want of following her own path, this shock leads Yuri to disown Hana. This stands in stark contrast with the Akiyama family: Yukari’s parents are fully accepting of her hobbies and also are said to speak as a contemporary family might. Far from the stiff environment in the Isuzu household, the Akiyamas paint a picture of a warm, inviting family. Thus, we have differences in the two families that juxtapose one another. Throughout Girls und Panzer, passing references are also made to Mako’s relationship with her grandmother, and Saori’s close bonds with her father. However, this raises the question: what is the significance of all this to Girls und Panzer? Clearly, the contributions of presenting such differences in family cannot be limited to breaking the trend of anime where the parents are largely absent, otherwise, there would’ve been minimal incentive to include such details.

What motivates this is the fact that these familial differences set the stage for Miho’s character growth. Miho’s background as the daughter of a well-known tactician, Shiho Nishizumi, means that her every decision in Panzerfahren has a consequence. Her failure to win a year earlier led her to leave the Black Forest school, and Shiho also considers disowning Miho for sullying the family name. By providing these contrasts, whether it be the warm air surrounding the Akiyamas or Yuri’s eventual reconciliation with Hana after learning that Hana’s interests in Panzerfahren have allowed her to follow in the true spirit of flower arrangement, the gravity of Miho’s situation is made clear. This is what the aforementioned editorial misses: the dialogues and characters’ mannerisms become of limited value without context, which naturally limits the potential of discussion. Here, the “action”, rather than the words, leads to a definitive conclusion: the emphasis on families in Girls und Panzer foreshadow Miho’s past and reasons for making the decision that she does. Such an impact could not have been achieved without this focus on families, and quite similarly, the presence of these different family structures are inconsequential if they do not have a clear connection to the story; a part of the genius in Girls und Panzer is the writers’ ability to tie these elements together by making use of the characters’ actions and decisions, rather than the minutiae in how they converse with one another.

2 responses to “Actions Speak Louder Than Words: On the limitations of analysing familial dynamics in Girls und Panzer through dialogue”