“Failure will never overtake me if my determination to succeed is strong enough.” —Og Mandino

A little less than a year after I got Receiver with my Overgrowth preorder, I’ve finally beaten the game touted as a highly detailed gun mechanics simulator with procedurally-generated worlds and permanent death. This unique combination of elements means that Receiver is likely to be one of the most challenging games around, more so than The Impossible Game and The World’s Hardest Game. However, this difficulty arises as a consequence of its simplicity: Receiver forces players to first learn how to reload their weapons properly, and initially coming from most shooters where smashing the ‘R’ button triggers a reload animation, Receiver requires an intricate pattern of coordinated, precisely placed keystrokes to reload a weapon. It takes roughly two hours to fully master all of this; being able to reload any of the weapons from muscle memory without looking at the keyboard is immensely satisfying, but also just the beginning of the game. The next task is to focus on finding eleven tapes scattered though a procedurally generated world where starting resources, enemies and tape placement is random. Even the most skilled player may find themselves entering a room and dying in an instant because of a turret or hover-bot’s placement, forcing them to start over. This ceaseless cycle of death and failure leaves players frustrated, often to the point of rage-qutting. Players with a more open mind will persist, and through reinforcement learning, eventually develop a mastery of the weapon mechanics and a fear of the killtrons’ distinctive detection sound. 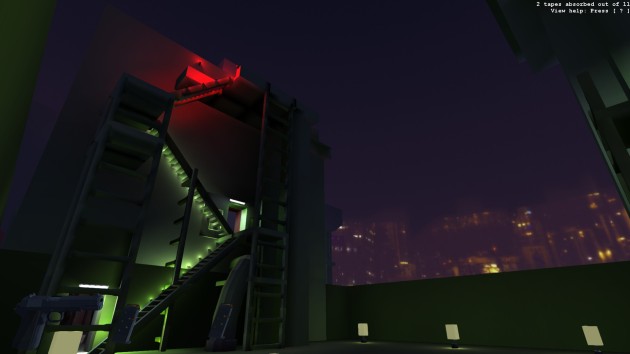 These two seemingly simple developments lead to a degree of immersion in Receiver that even triple-A titles lack; how are these elements able to cultivate a sense of being a part of Receiver? It turns out that the lack of a health system in Receiver, and the ever-present killtrons eventually lead players to associate the killtrons’ detection sound with death. This leads players to immediately withdraw, retreat, hide or ready their weapons. However, some scenarios may lead to panic: being rushed by a hover-drone or entering a turret’s line of sight can lead to some interesting behaviours. One may empty an entire magazine at the killtron and miss every shot, or else fumble a reload while running away from a pursing killtron. Other times, death comes out of the blue, as swiftly and unexpectedly as any jump scare in a horror game. Paranoia may strike in yet other ways: how many enemies are there in the next room? Is that killtron really disabled or should several more rounds be put into it to make certain? Receiver is not even a horror game, and it can frighten players more effectively than most games of this genre. Through reinforcement, Receiver is able to effectively convey the sense that death is swift and often unexpected. This aspect contributes to the immersion in Receiver, forcing players to make full use of caution, as well as auditory and visual cues within the environment, in order to survive. The ever-present, unexpected nature of death keeps players on their toes, giving the sense that players are genuinely trapped in a building with nothing more than a weapon and their wits. This difficulty makes completing Receiver immensely rewarding, and in immersing players fully into its environment, Receiver illustrates how well-designed game mechanics can make a game far more entertaining than graphics alone.