Remarks about the Special: Reina’s outlook is a catalyst for Kumiko’s growth, rather than a genre-defining presence in Hibike! Euphonium

4 Comments Posted by infinitezenith on September 26, 2015

“The trick to forgetting the big picture is to look at everything close-up.” —Chuck Palahniuk 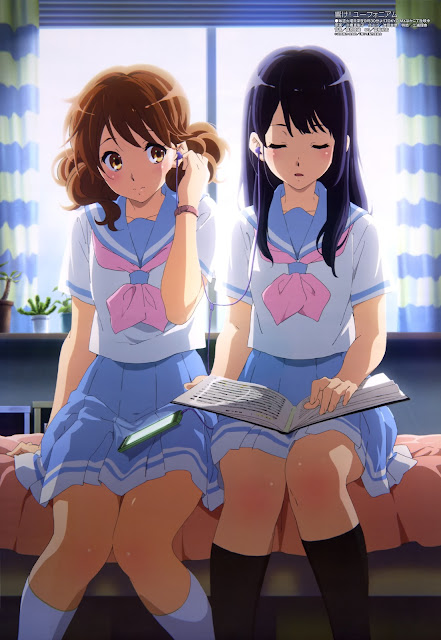 I’ve long held that the minor scruples in Hibike! Euphonium ultimately proved to be minor, nothing worth fixating over in comparison to the anime’s primary objective of having Kitauji’s attaining a gold at competition. This formed the theme of the anime, I stated, simply because the anime was about a high school concert band’s honest efforts to see just how far they could go if they applied themselves to the task. Consequently, all of the conflicts, though with a role in the band’s journey, is not something that merits more detailed analysis. Naturally, some fans would disagree, purporting that these details matter even though the anime eventually resolved these conflicts quietly as Kitauji’s concert band prepares for competition. There is one particular matter that is meritorious of further discussion, dealing with Reina Kousaka’s declaration to be recognised above the others as someone special. When this was made clear, there are unverified claims that Japanese audiences reacted quite strongly to Reina. As per Hofstede’s model of cultural dimensions theory, Japanese culture tends to value collectivism, which is characterised by emphasis on group opinion and relationships, and losing/gaining face (i.e. “my actions can impact the reputation of those around me”). Thus, when Reina expresses explicitly that she wishes to be special, her attitudes are more consistent with those of individualism, where the individual’s own opinions and goals come first, and reputation is tied strictly to the individual (i.e. “my actions only affect how people see me”). This outlook is radically different than what is the norm in Japanese culture, understandably coming across as somewhat of a surprise, but for viewers in North America and Europe, Reina’s actions seem quite normal. However, there are some who erroneously posit her attitudes as being “edgy”, so the goal of this discussion is to explore why “edgy” is not the appropriate word to describe Reina.

Reina illustrates that her mannerisms are quite removed from Japanese norm almost immediately after her introduction, when she plays Amazing Grace after classes let out, before proceeding to yell out at the top of her lungs in frustration after learning Kitauji’s concert band is unfit to play at SunFes. Expression of one’s emotions is less acceptable in Japan relative to North America, but here, she’s visibly disgusted at Kitauji’s band. Typically, Japanese culture dictates that one must maintain their dignity in face of adversity (characterised by the oft-heard phrase “仕方ないがない”, or “it can’t be helped”). Whereas North American culture favours rising to the occasion when faced with challenges, the Japanese prefer to endure suffering, so people tend to go along with things even though it may not be optimal. By immediately presenting audiences with this action, Hibike! Euphonium paints Reina as an individual whose presence is quite pronounced in the Japanese classroom setting. This is later confirmed when she directly tells Kumiko that she desires to rise above the others and be recognised for doing so. Her words certainly carry an individualistic tone, but the manner in which she delivers them also serve to highlight how Reina sees herself. The Japanese language is typically wielded in such a way as to abet saving face, and consequently, there are a lot of particles and terms for providing indirect answers. For instance, if I ask someone whether they’re free to see a movie with me this Saturday, they might decline by saying “土曜日は、ちょっと” (lit. “Saturday is a little [inconvenient]”). Conversely, direct answers are not seen as offensive under most cases in North America, which characterises the culture’s propensity to focus on getting things done. Thus, by being direct to Kumiko, Reina demonstrates on numerous levels that she’s very much an individualist with clearly-defined aims, and the will to achieve her goals even if it means stepping on a few toes.

While Reina’s mannerisms and beliefs are bolder and more forward than what would ordinarily be seen in Japanese culture, this definitely would not satisfy the criterion for what it means to be “edgy” or “dangerous”, both in the context of Hibike! Euphonium and for fiction as a whole. We recall that a particular work or concept is “edgy” if it is avant-garde. Thus, for Reina’s personality to be defining a trend, her presence and actions must either have a substantial impact on the characters around her or motivate similar character designs in other works. While it’s true that Reina does motivate Kumiko to be a better euphonium player and strive for improvement, the other members of the band continue to conduct themselves as they had previously. Quite similarly, characters resembling Reina have been around in anime and light novels for quite some time, and as such, Reina’s forward personality is unlikely to inspire a new trend in light novels. Consequently, Reina cannot be considered as being edgy: though she drives Hibike! Euphonium forwards by inspiring Kumiko, her overall impact is much more limited than is initially apparent (some sources state that Reina’s role in the novels is much smaller). Rather than serving an “edgy” role, Reina’s presence in the anime adaptation of Hibike! Euphonium likely was intended as the catalyst to motivate Kumiko to perform her best in Kitauji’s competition. If this is the case, then my claims will continue to hold true: the minor subtexts and implications of Kumiko’s relationship with Reina notwithstanding, the two’s friendship ultimately serve one purpose, and that is to help Kumiko contribute her best to Kitauji’s performance. 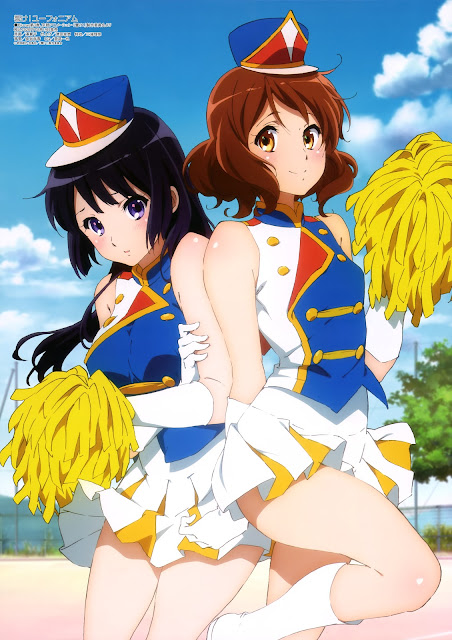 4 responses to “Remarks about the Special: Reina’s outlook is a catalyst for Kumiko’s growth, rather than a genre-defining presence in Hibike! Euphonium”