“Caring – about people, about things, about life – is an act of maturity.” —Tracy McMillan

After four episodes of GochiUsa, I conclude that there is probably something I could find to talk about in each episode. As a result of this and the readers’ support, I’m going to drop by weekly for episodic discussions for each episode. It’ll be my first effort at doing episodic reviews, so this is new ground for me: so I’ll take a leaf out of TheRadBrad’s page to say thank you so much for all of your support, and with that being said, let’s do this. The fourth episode opens with Cocoa and Chino’s friends having afternoon tea at a café. Maya and Megu look to their high school friends as role models, so when Cocoa orders a tea set for them, they spend a fair bit of the afternoon trying to see how Cocoa and the others go about eating it. Meanwhile, concerned that Chino, Maya and Megu are watching their every move, Cocoa and Chiya attempt to hold a conversation on more mature topics, such as Einstein’s Theory of Relativity and String Theory. Rize tells Chino, Maya and Megu that teasets can be enjoyed in an ordinary fashion: unlike cutlery, there’s no specified order in using them. Later, Cocoa begins behaving in an unusual manner after receiving a letter from her older sister, and spends a morning trying to be more reliable before burning out. She recruits everyone else to help her out, eventually learning that she has matured over the past year. The next morning, Mocha’s train arrives in town.

GochiUsa has proven to have a surprisingly wide breadth with respect to what one can reasonably talk about, and it seems that the individual episodes have a pair of self-contained messages, conveniently and clearly divided into two sections. The first deals with notions of what it means to be mature: while Chino, Maya and Megu look to Cooca’s friends as role models, Cocoa and her friends feel the pressure of keeping up with expectations. Rize’s words with Chimame summarise the appropriate response: acting naturally with politeness is really all that’s required. There’s no need for pretense, since faking it can sometimes be extraordinarily difficult (as Chiya and Cocoa find out when they attempt to discuss the Theory of Relativity). Similarly, Tippy and Takaharo remark that maturity isn’t something that can easily be faked, which forms the basis for the episode’s second half. While Cocoa is trying her hardest to build habits that will impress her older sister, her efforts are unsuccessful simply because it’s not who she is. Conversely, Cocoa is able to demonstrate that she’s matured simply by doing what she ordinarily does: her aptitude as a barista has definitely improved since GochiUsa started. 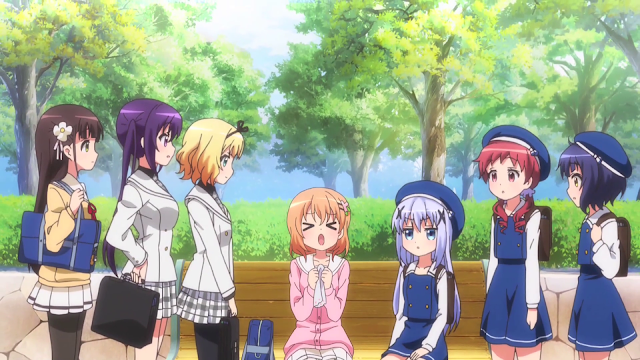 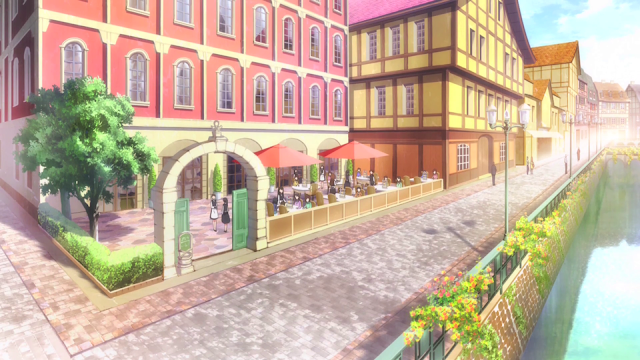 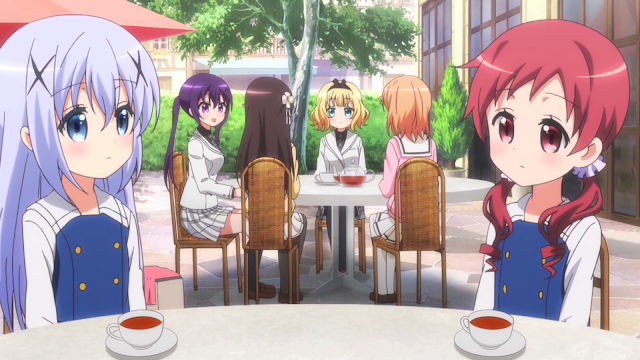 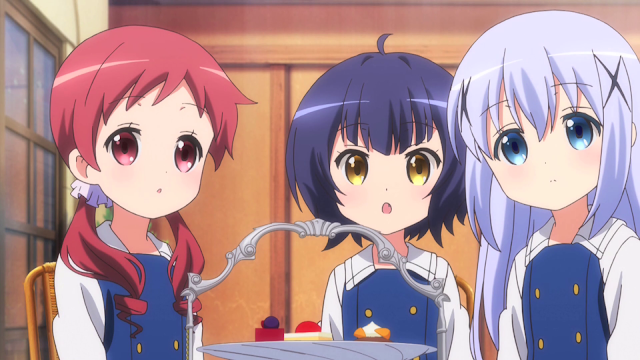 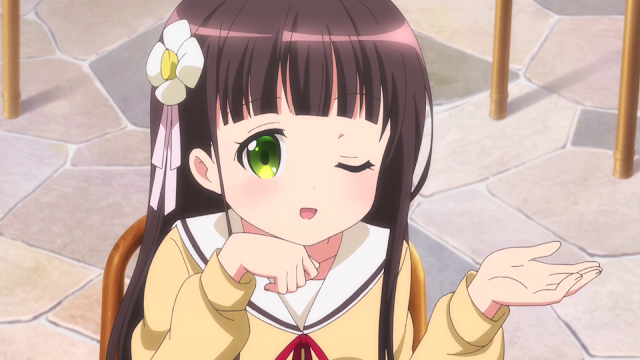 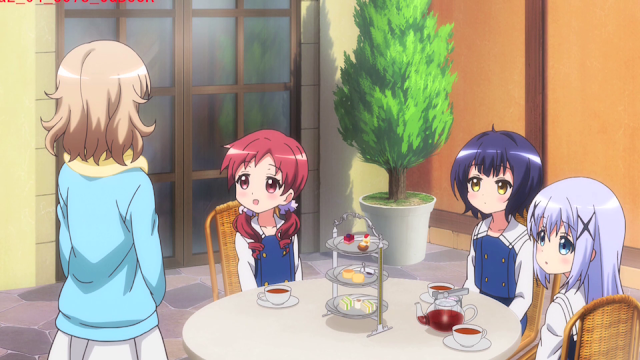 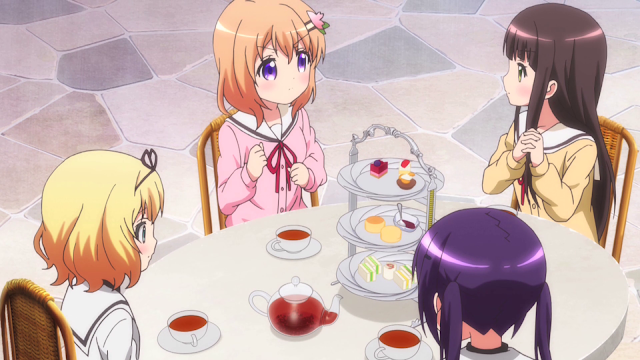 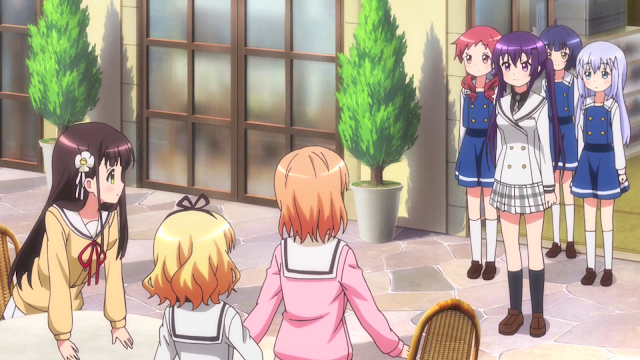 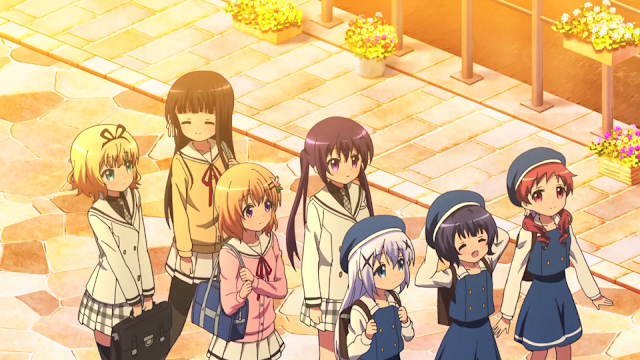 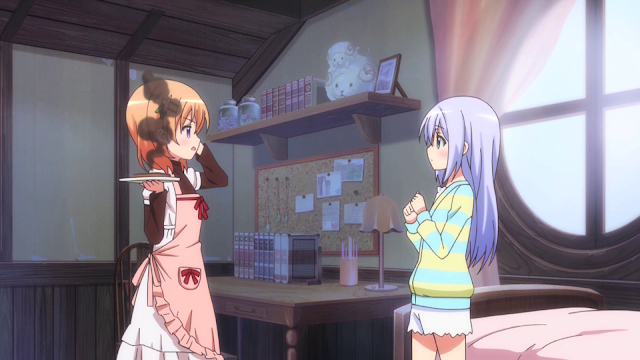 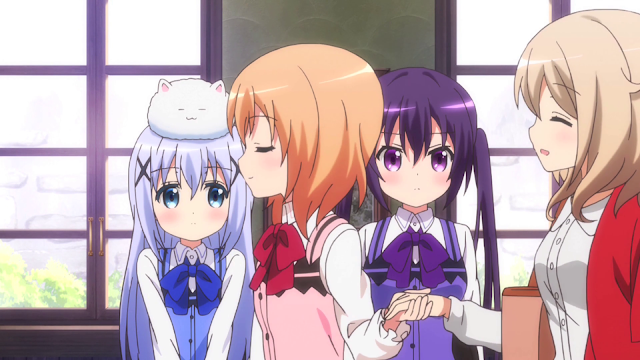 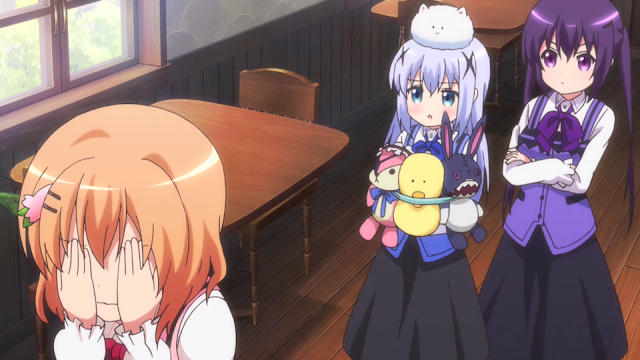 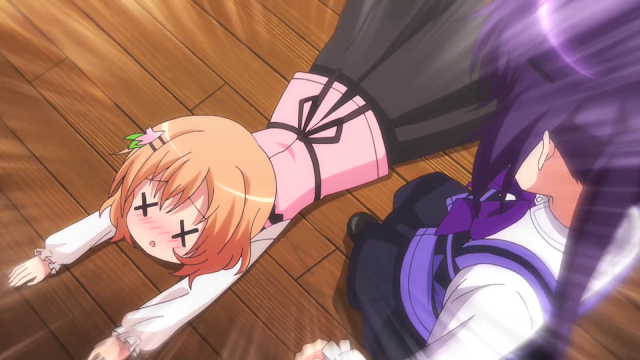 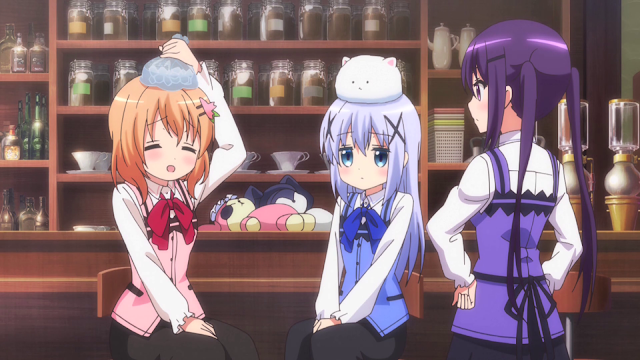 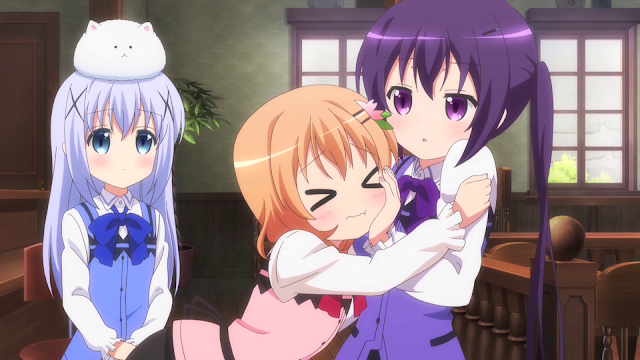 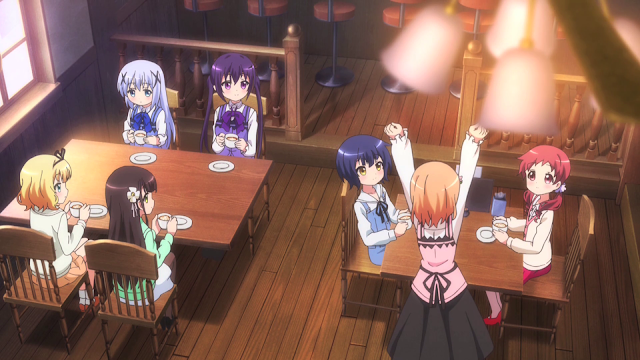 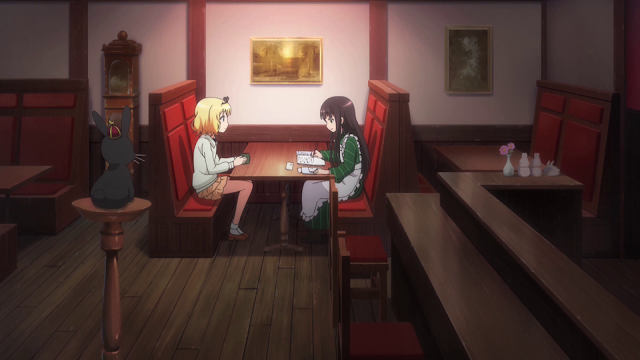 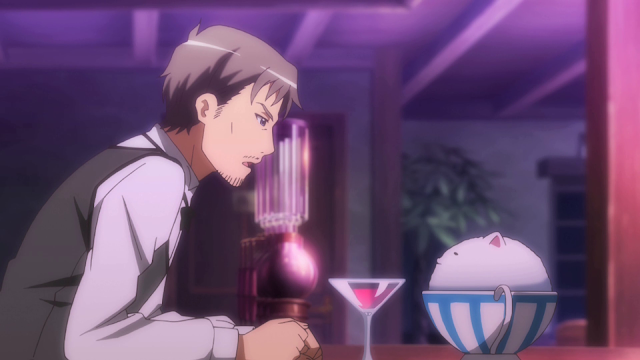 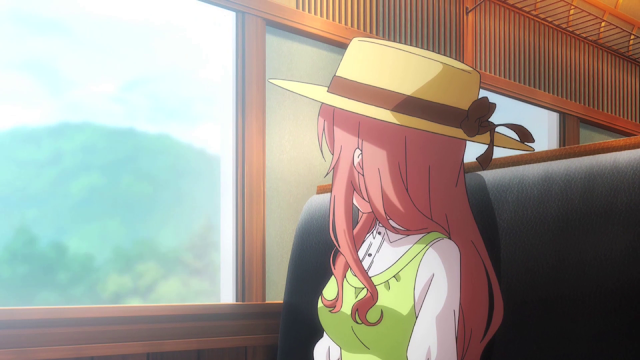 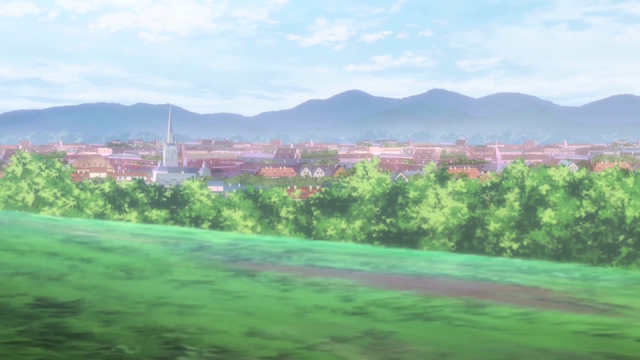 While it’s not a particularly difficult prediction to have nailed, I’m still somewhat pleased that my speculation turned out to be correct. Mocha does indeed make a short appearance at the fourth episode’s end; the basis for this prediction was that introducing her at the very end, rather than in the beginning or middle of the episode, would build anticipation amongst the audience. Consequently, now that viewers have seen what sort of reaction Mocha invokes in Cocoa, and have caught a glimpse of Mocha, they’re inclined to tune in next week to see what really goes down. It’s a clever way of structuring a narrative to prompt excitement, and I definitely look forwards to seeing how Mocha interfaces with the remainder of the cast. This is an exercise left to next week, and with the fourth episode now finished, I’m switching up my blogging such that GochiUsa will receive episodic reviews. There’s definitely enough time for me to do this without interfering with my priorities (namely, my graduate thesis) and the other scheduled posts: besides the solid writing in GochiUsa providing an abundance of topics to discuss, I’ve become somewhat faster now, so posts aren’t as time-consuming to draft out.