Site awards on a Winter Solstice, or, the arrival of the 2015 winter holidays

7 Comments Posted by infinitezenith on December 21, 2015

By the virtue of time zones, Winter Solstice this year will occur at around 2240 local time. Marking the shortest day and longest night of a given year, the exact date and time often varies owing to astronomical factors, and from here on out, it’s now winter. I celebrated Dongzhi (冬至) yesterday with my family: our schedules are rather busy, so we won’t be celebrating tomorrow evening, which is Dongzhi proper. On Saturday, I attended a Halo 2 LAN party with some friends. Motivated by a wish to have the LAN party we’d dream about having since we were fourteen, we played Halo 2 simply until we couldn’t play any more and then drove to a pub near campus for a late-evening dinner (I ordered a sirloin steak sandwich with onion rings and mashed potatoes, and was pleasantly surprised to learn it was the evening special, so I got a five dollar discount on it). As the holidays draw closer, I’m pushing to finish my conference publication’s draft and revise it. I spent most of today putting in the citations into Bibtex format and added some figure captions to said paper, but it’s well over the page limit, so there are definitely things we’ll need to trim out. For my thesis work, my simulation is very close to being finished, and my main focus after the conference paper’s been submitted will be to return to my thesis paper: now that I’ve written about my model in some capacity, I’m feeling a little more confident about describing my implementation. With that being said, once I finish helping my supervisor grade this semester’s iOS projects on Wednesday, I’m taking a bit of a break from work, and will set my sights on building the Master Grade 00 Raiser I picked up last Winter. In the gaming department, I’ll spend several days unlocking some dog-tags for Battlefield 4, and will also begin the Battlefield: Hardline campaign. Once the new year rolls around, I’ll resume working on my thesis work, and begin the job-search anew. 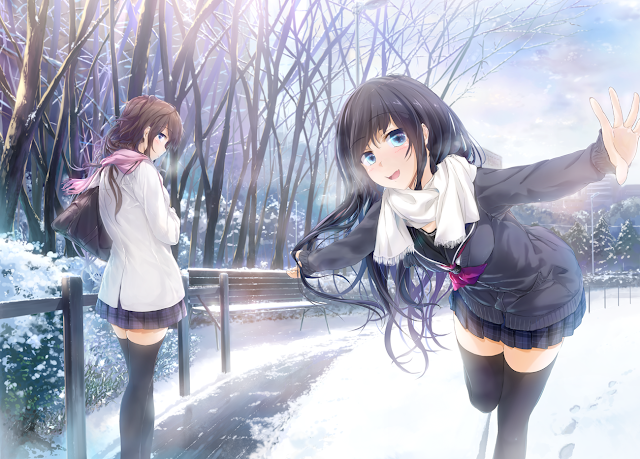 As per the post’s title, I am also here to discuss the fate of two blogging awards I was (not so recently) nominated for. The first of these is from Jusuchin of Right Wing Otaku: it’s the Creative Blogger Award, where I’m to outline five things about myself, then nominate a handful of blogs to pay it forward. This one’s been sitting in the to-do list since September, which gives an idea of how bad I am with requests (I’ve got a reader who’s been quite interested in reading me do a post on Life is Strange, and I’ve only just beaten episode one today, despite his requests dating back to June 2015). The second blogging award is the Free Spirit Award, nominated by All The Fujoshi Unite from the blog of the same name. This award differs in that I’m to talk about notions of insanity, and similar to the Creative Blogger Award, I’m to nominate a handful of blogs to pay it forwards after. Admittedly, I don’t actually follow many anime blogs, so what I’ll do here is nominate four blogs and allow them to pick either one of the awards they’d like to write about. I picked these blogs because they’ve got interesting content, and more importantly, they’re sufficiently different than what I do here that I’m quite curious as to how they’re going to reply to the questions I’ve got lined up for them.

For the nominees, you’re free to do one, both or neither of the awards. If you decide to go with the Free Spirit Award, your topic is solitude. With that being done, I’ll now take a rain check on the actual task of writing the award pages themselves (I do them as pages so they’re a little easier to find) and will do my best to ensure that they are completed before the year ends (so, I’ve got roughly ten days to do two whole award pages). For the present, I’ll return to my paper and take a look at the iOS projects I’m supposed to be helping evaluate: the former is still missing an abstract, and the latter, I’ve still to make some remarks on.

7 responses to “Site awards on a Winter Solstice, or, the arrival of the 2015 winter holidays”