The Anko Dance as the Magic Moment in Girls und Panzer

2 Comments Posted by infinitezenith on February 27, 2016

Girls und Panzer Der Film‘s home release is set precisely a quarter-year from today, and in the interim, watching Girls und Panzer‘s original televised run in its entirety is not the worst conceivable idea: it’s been three years since then, and the anime had distinguished itself from earlier expectations following its conclusion. During a re-watch, I encountered the scene that constitutes my “magic moment”, loosely defined as an event or moment within a show that thoroughly convinces me that it is worth watching, beyond any doubt. In Girls und Panzer, this magic moment is when Miho notices that her teammates are losing their morale during a gruelling match against Pravda. She overcomes her embarrassment to perform the Anko dance, much to all observers’ surprise. Their team had been backed into a corner previously after charging forwards, and it is here that Anzu discloses that their school was under threat of closure. This news, coupled with an imminent loss and bitterly cold conditions, deprives Oorai’s team of their confidence. With everyone on the verge of giving up, Miho’s unorthodox approach to restore morale succeeds, and illustrates another aspect about her capacity as a leader. As she continues the dance, the other girls join her, and therein lies the magic moment. By showing the other girls joining in on the dance, this moment establishes that Miho’s successfully earned the trust of her teammates: everyone is ready to put their faith into Miho’s leadership and follow her direction. 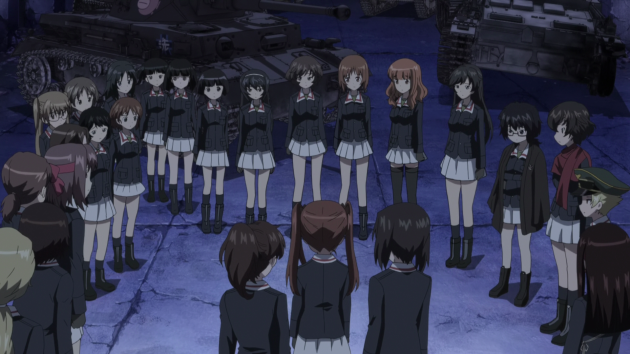 There are, of course, different magic moments depending on perspective: some fans found the Maus’ appearance was one (for me, that was one of the most well-executed surprises of all time), and others found Miho’s kill-streak against St. Gloriana to be impressive, as well. On the whole, these magic moments underlie the reason why Girls und Panzer is so successful: solid execution in integrating world-building, characterisation and inclusion of mechanical elements meant the anime presented a familiar premise in a completely new light. At its core, Girls und Panzer is functionally similar to the Cinderella story oft depicted by sports films, during which a competitor is able to succeed to a much greater extent than was expected of them. It’s the classic underdog story; in a fairy-tale run, Miho Nishizumi leads Ooarai Girls’ Academy to victory at the National Panzerfahren tournament to save their school from certain doom. However, this seemingly-generic idea is executed remarkably well: there are thirty-one unique characters on Ooarai’s team alone, and while anime with a seemingly large number of characters, each are represented as multi-dimensional and organic. Particular attention was paid to the armour to ensure their performance is consistent with their real world equivalents. Taken together, Girls und Panzer combines each element to form a compelling narrative that is relatable and plausible, and for this reason, the anime is highly successful: Girls und Panzer Der Film is set to continue on with that legacy, and I imagine that the next three months will, far from being a long wait, pass by in a heartbeat. I’ve recounted what constitutes my magic moment in Girls und Panzer, and to mix things up a little, I now have an exercise for the reader: if you are a Girls und Panzer fan, what was your magic moment?