Charging forwards to engage the Musashi, Akeno and the Harekaze succeed in creating a distraction, preventing the Musashi from opening fire on civilian installations. However, they bear the full brunt of the Musashi’s assault, suffering damage to their systems in the process. As they begin to retreat, other vessels from Yokosuka Girls’ Marine High School, the Admiral Graf Spee and even instructor Furushou arrive, providing covering fire to hold off the Musashi long enough for the Harekaze to close the distance and board it. Akeno shares a tearful reunion with Moeka, and their return to port is welcomed. Having gone through a gruelling battle, the Harekaze succumbs to its damages and sinks while moored, leaving Akeno and the others to bid their vessel farewell. That the finale concluded in the manner that it did was ultimately no surprise: having lent her time and resources to help out the other vessels once the truth was known, Akeno’s humanitarian spirit and resolve to help people at sea is reciprocated in full, allowing the deadliest of the Yokosuka Girls’ Marine High School vessels to be stopped without casualties or property damage. It’s a fitting finale for a series that is essentially the naval equivalent of Strike Witches and Girls und Panzer, and with Hai-Furi now over, it’s time to consider the series as a whole.

With its theme revolving decisively around friendship, compassion and its necessity to combat the challenges the sea presents, Hai-Furi returns to this point time and time again, whether it’s Akeno’s desire to save her own crew from trouble, rescuing Wilhelmina of the Admiral Graf Spee, participating in the rescue of a civilian vessel, and when a treatment for the virus is presented, does her utmost in leading the Harekaze to ensure a safe rescue each and every time. Through these actions, even the Mashiro and Kuro, initially doubtful of Akeno’s ability as a captain, are swayed. Akeno’s kindness to those around her is reciprocated in leading her crew to completely accept her as their captain. In turn, the crew’s combined unity and resolve allow them to help both the Hiei and Admiral Graf Spee, who return in the finale to return the favour and assist the Harekaze’s mission. Friendship and camaraderie lie at the heart of Hai-Furi, and although this was not always clear when Hai-Furi first aired, Akeno and the Harekaze’s adventures, coupled with the lack of an antagonist faction, both serve to highlight that on the open seas, challenges and setbacks are overcome when the crew is unified, sharing a common goal and trust in their leadership.

“I don’t mind that. It’s totally fine to me that they have hundreds of weapons in Battlefield 4 that are completely out of place and inaccurate to the specific factions and battles that may have them…if we applied [the mindset that a game should be realistic] to Battlefield 4…there’d be a lot less variety, and it would be a less interesting and fun game.” —LevelCapGaming on realism in Battlefield 1

Notions of teamwork and unity as a satisfactory theme notwithstanding, one of the largest detractors critics have levelled against Hai-Furi is the realism and credibility factor. Individuals with a background in naval combat have mentioned that Akeno and the Harekaze disregard all known protocols and procedures, and similarly, individuals with strong interests in science fiction have suggested that the virus’ effects, its inactivation mechanism and vector push the bounds for what can be considered credible in a fictional setting. Both assertions are true: I fully agree that physics and biological sciences are not realistically rendered in Hai-Furi (or even close to that). Nonetheless, I will not hold this against Hai-Furi: anime such as Hai-Furi, Girls und Panzer and Strike Witches succeed because they emphasise fun and character growth over real-world accuracy. The same definitely holds true in video games: recent criticisms of the new Battlefield 1 is that the inclusion of such a diverse array of automatic weapons is unfaithful to the era, since most WWI battles were fought with bolt-action rifles. However, a game with only bolt action rifles would not likely be fun for most players. Battlefield 1 is “realistic” the same way Battlefield 4 is “realistic” — neither are, and that’s acceptable because the games aim to make a fun experience for the players rather than reproduce the details that would take away from a player’s experience. Similarly, Hai-Furi discards military and scientific accuracy in favour of crafting various scenarios for the characters that drive them closer together during the course their adventures. 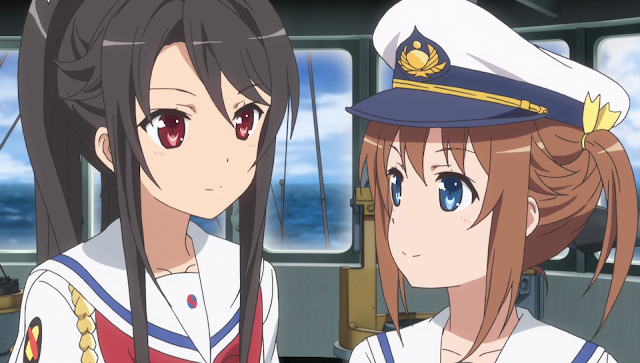 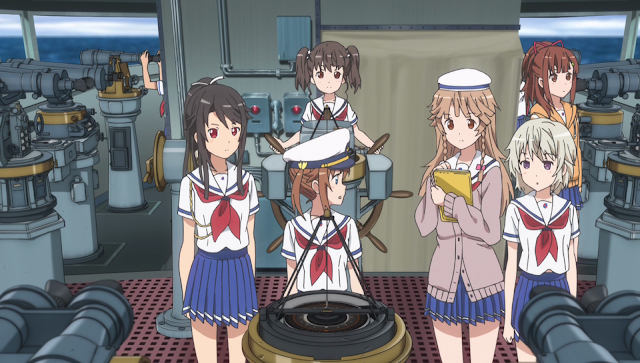 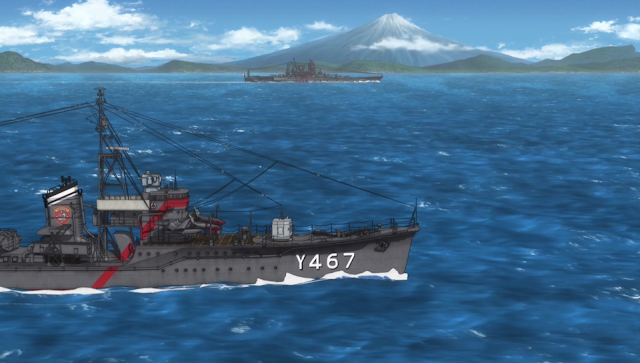 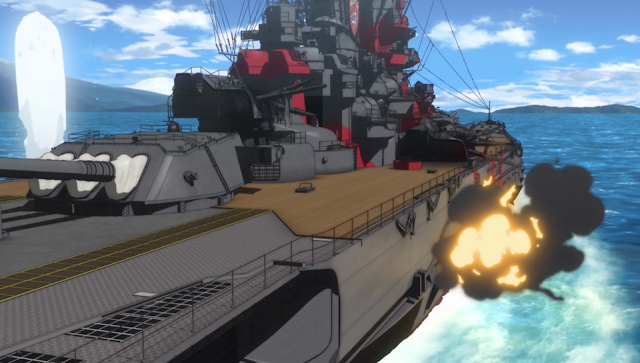 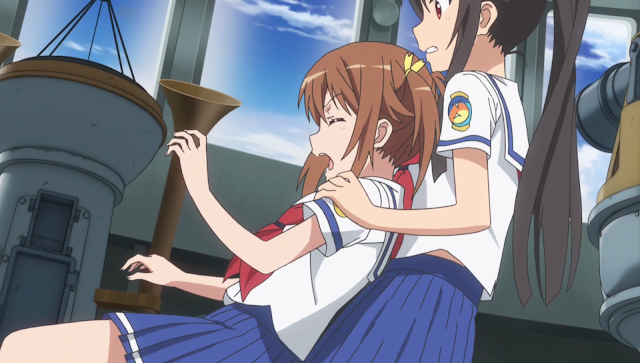 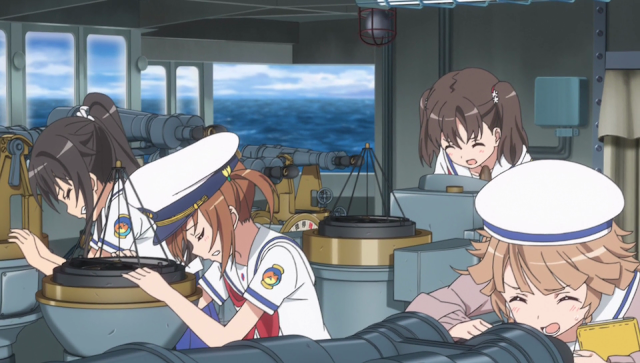 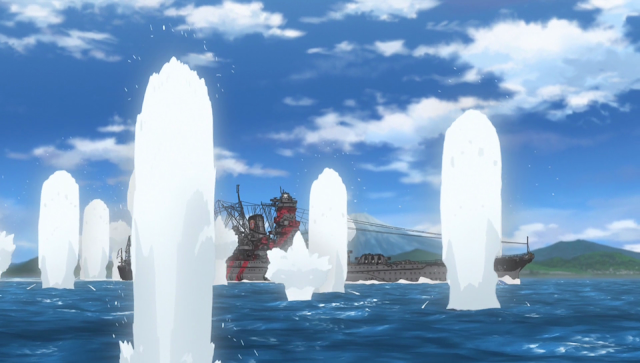 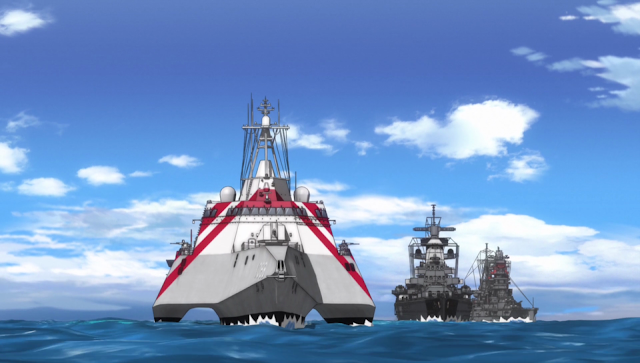 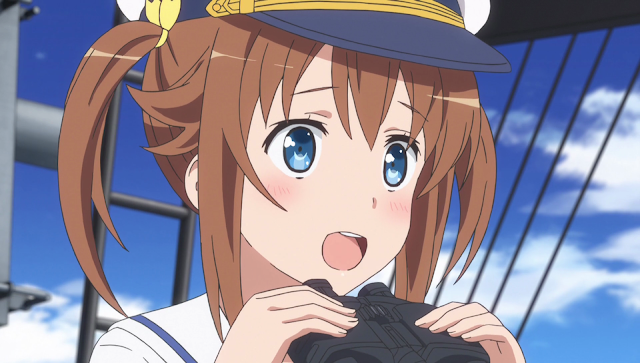 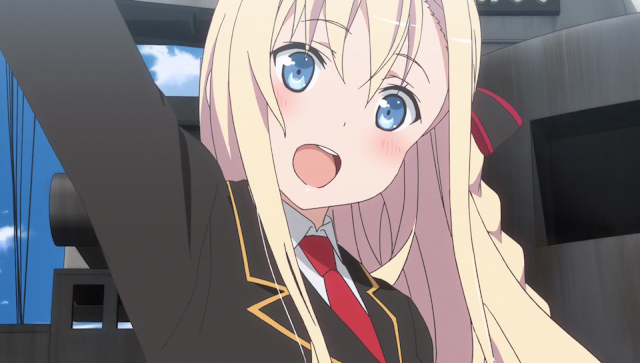 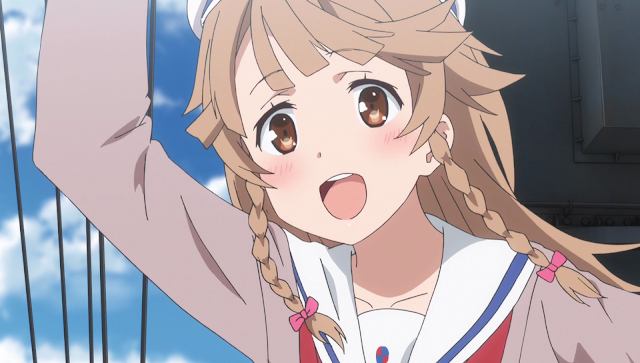 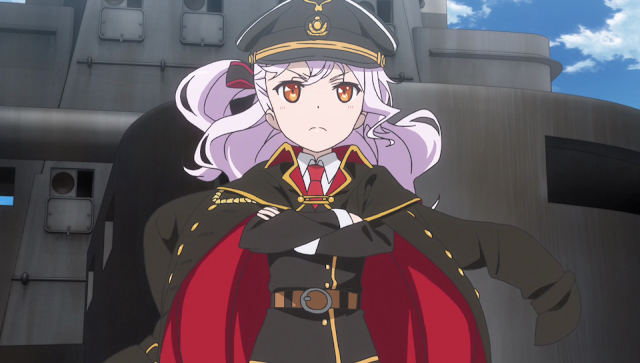 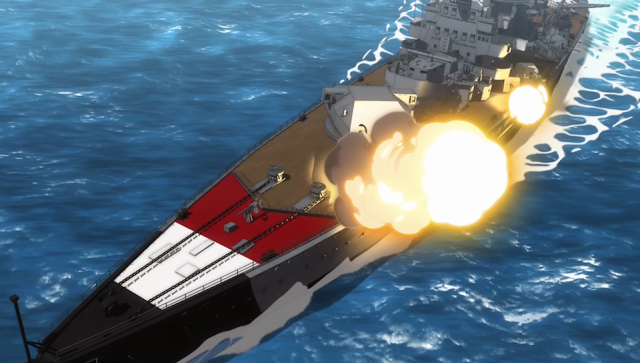 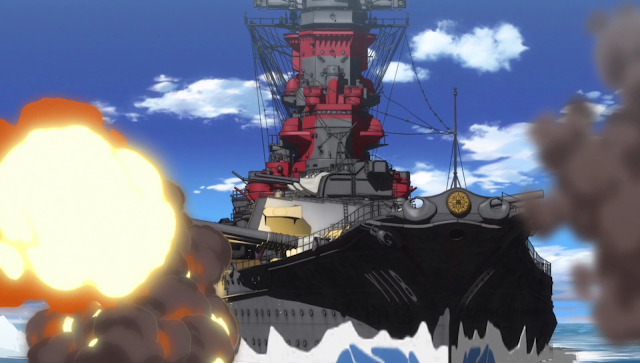 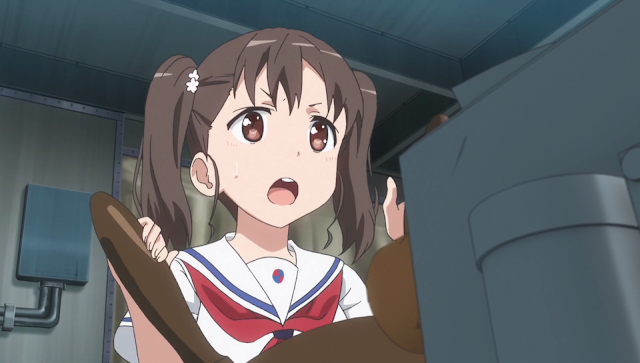 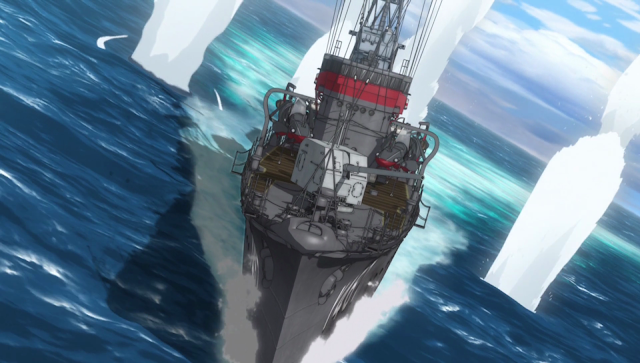 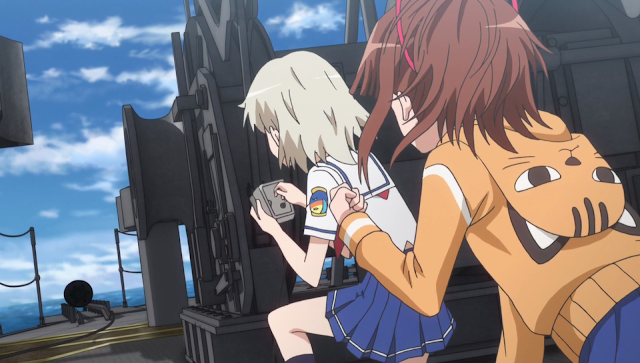 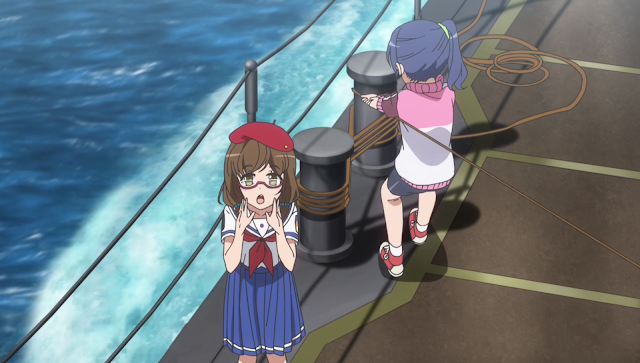 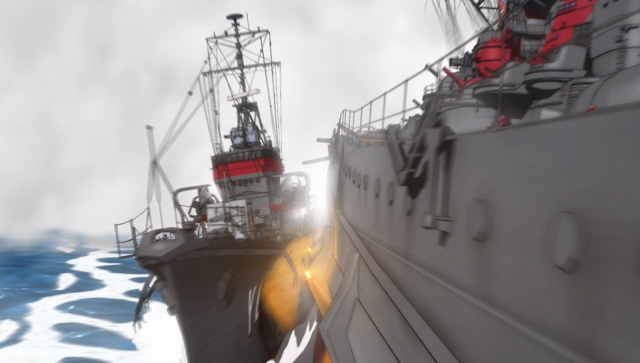 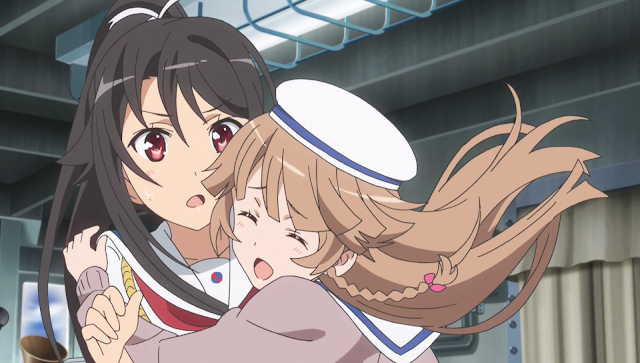 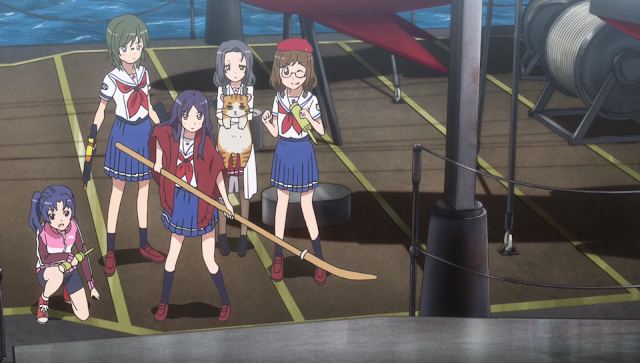 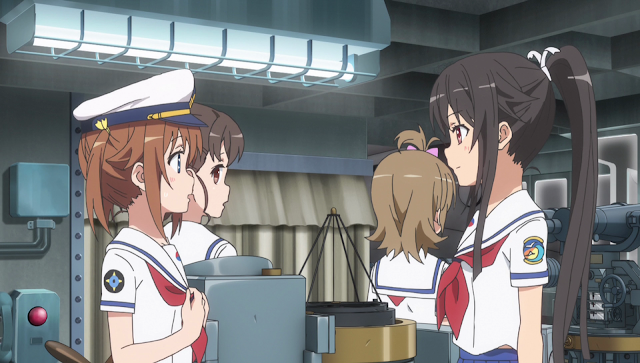 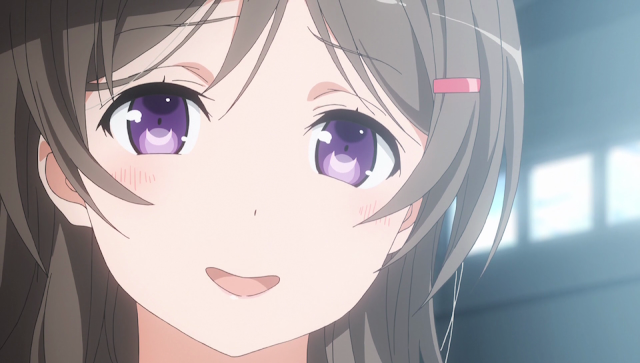 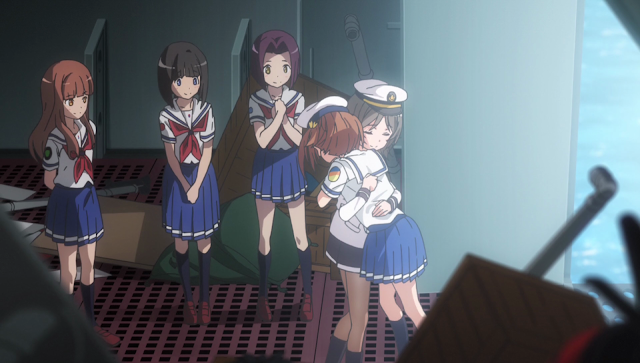 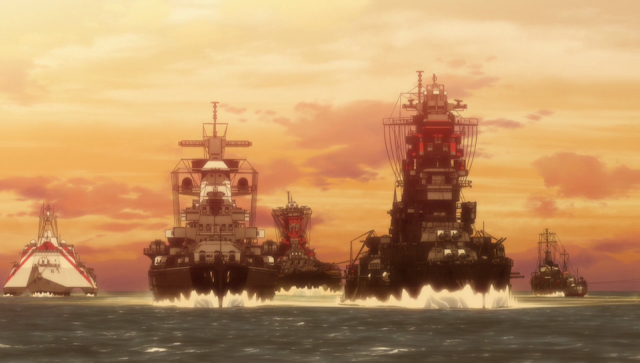 “The writing team wanted to have real naval battles and the Aniplex producer vetoed that idea. They didn’t have the time or the chance to scrap what they had and start from the ground up under the new conditions, so they just salvaged what they could off the story and came up with bullshit to fill the gaps.” 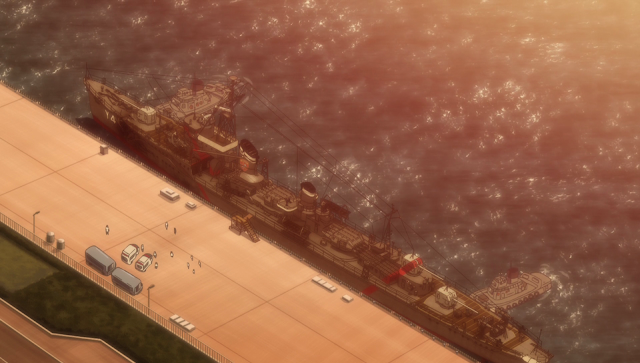 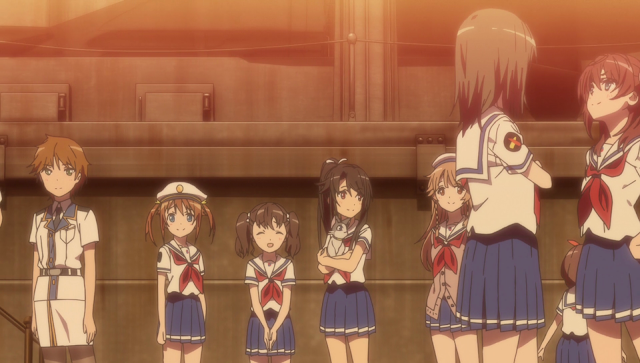 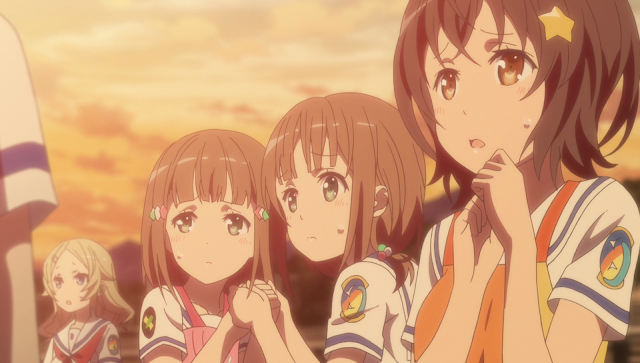 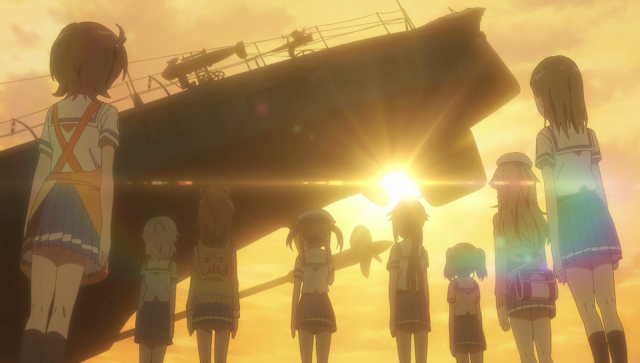 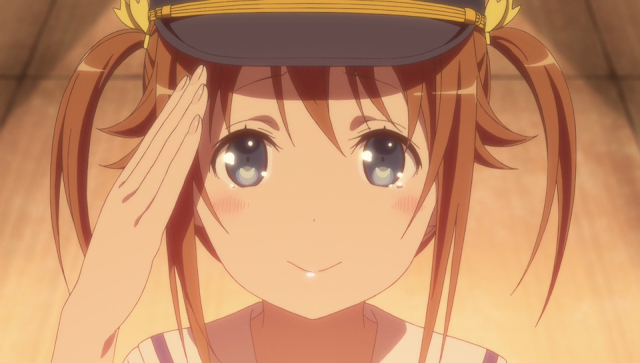 From a personal standpoint, I certainly enjoyed Hai-Furi for what it is: while Hai-Furi lacks the same magic that made Girls und Panzer or Strike Witches memorable, it was quite rewarding to see Akeno and her crew become closer together as a result of their adventures and mishaps together, the aptly-named “pinches” that drove most of the episodes. Hai-Furi started out shrouded in mystery, and gradually transitioned to a more familiar progression once the virus’ origin and mechanism were explored. However, in closing off with the Harekaze sinking from damage in port, Hai-Furi shows that it still holds surprises for the audiences in its final moments. It’s intended to be a bittersweet ending: everyone’s safe and back on land now, but Akeno and the others lose the ship that was their home. With this in mind, it is quite possible to return the Harekaze to service later down the line provided the damage was not too severe. Overall, Hai-Furi presents a satisfying conclusion to one of this season’s more unorthodox anime. I would give Hai-Furi a weak recommendation for fans of the military-moé genre; while some narrative elements appear rushed into place to fit the story at the expense of plausibility, for what Hai-Furi succeeds in doing, it does reasonably well, showcasing naval implements in modest detail and telling a familiar story about the importance of friendship on the high seas.