2 Comments Posted by infinitezenith on July 2, 2016

“Success is simple. Do what’s right, the right way, at the right time.” —Arnold H. Glasow

Proceeding past the third episode, Flying Witch earns its place as one of the most solid anime of the Spring 2016 seasons, and even as a contender for one of the best-executed slice-of-life anime I’ve seen. Continuing to following Makoto’s everyday adventures in Aomori with Chinatsu, Kei and Nao, everyone experiences together the different facets of Makoto’s witch training. Along the way, they meet Inukai, a girl who develops dog-like features during day hours undr the influence of a powerful spell she inadvertently invoked. As time wears on, Chinatsu, Kei and Nao join on Makoto’s adventures in greater frequency’ after Chinatsu follows Makoto’s cat, Chito, on a mini-adventure, she watches as Makoto learns to fly more effectively and volunteers herself in a magic experiment after wanting to become a witch herself. Together with Kei, Makoto and Chinatsu later visit a special café, read fortunes together, pick apples, fly to visit a sky whale and in the season finale, Makoto crafts a high-grade witches’ robe for Chinatsu before viewing land-fish gathering in anticipation of an upcoming festival.

Flying Witch presents a novel take on magic that sets this anime as being quite distinct from J.R.R. Tolkien and also, more similar to that of J.K. Rowling. Commonplace in Western fiction as a powerful supernatural force, magic is portrayed differently according to the narrative’s requirements. In Tolkien’s Lord of the Rings, magic is an abstract power that higher beings such as the Maiar and Valar can wield to control natural forces or the will of beings. In his novels, magic wielders are oftentimes limited in how much of their power they can wield to avoid cataclysm in the physical world; Gandalf is forbidden from using his raw power against Sauron during the War of the Ring, and likewise abstains from taking the One Ring. Instead, he uses his magic sparingly to assist Frodo and the others in their quest, influencing Middle Earth’s history in a positive direction to release it from the threat of Sauron. Conversely, in Harry Potter, magic is regarded as a highly versatile utility for carrying out tasks, both everyday (cooking and cleaning) to practical (potions making, transfiguration, charms) or even combative (Defense Against the Dark Arts and the Unforgivable Curses). Witches and Wizards train to master these spells and other magical utilities in order to maintain their livelihoods, rather similar to how Muggles create technology of increasing complexity (household utilities such as microwaves or vacuums, concepts such as the scientific method, law, ethics and military hardware, ranging from assault rifles to cruise missiles, fulfil similar roles for us Muggles). As with Tolkien, the magic in Rowling’s writings are subject to different limitations and laws: Hermione mentions that food cannot be created freely as one of the exceptions in Gamp’s Law of Elemental Transfiguration, and similarly, Voldemort’s demise arises from him exploiting magic without understanding its implications. It becomes clear that magic in any fictional context can be quite cumbersome, but both Tolkien and Rowling do a fantastic job of crafting their own rules to ensure things remain plausible. In Flying Witch, the magic that witches such as Makoto and Akane wield are likewise subject to limitations and laws. Compared to the abstractions of Tolkien’s magic, or the more commonplace, tangible usage of magic in Rowling’s writings, the magic in Flying Witch appears to be a low-key and subtle variation of Rowling’s magic: there are potions that can induce partial transfiguration (such as in Inukai’s case) or different emotions (such as one that causes Chinatsu to find everything hilarious), and spells that can summon crows. Brooms also exist, but for transportation alone rather than encompassing sport. However, in Flying Witch, magic is not quite so commonplace or as flashy as seen in Harry Potter.

Makoto’s activites never draw too much attention, and in fact, magic is only one facet of her training. Despite being a witch, Makoto engages in a wide range of different activities; Akane notes that Makoto’s spellcraft is weaker and also helps Makoto learn about potions. The nature of Makoto’s witch training suggests that to be an effective witch is to be multi-disciplinary and well-connected with the nature in the world around one, far beyond simply just possessing a high proficiency with spells and potions as the stereotypical images of witches typically portray. This attention to subtleties in one’s surroundings to observe wondrous things often going missed by others is shown time and time again in Flying Witch: Makoto points out various supernatural and uncommon occurrences to Kei, Chinatsu and Nao. These events are typically found right in their backyard or locally, showing that there can be interesting things nearby. Because familiarity breeds complacency, individuals often miss things in the areas they know well simply because they’ve grown accustomed to the scenery. In showing the different aspects of the world that witches know, Makoto’s role is meant to evoke the idea that beauty, splendour and novelty can be seen quite close to home: ranging from creating robes and picking apples to visiting a hidden café or welcoming the Harbinger of Spring, mandrakes and sky whales, with her around, Chinatsu, Kei and Nao experience truly spectacular things, as well as simpler but equally meaningful moments together with Akane, Makoto’s older sister. 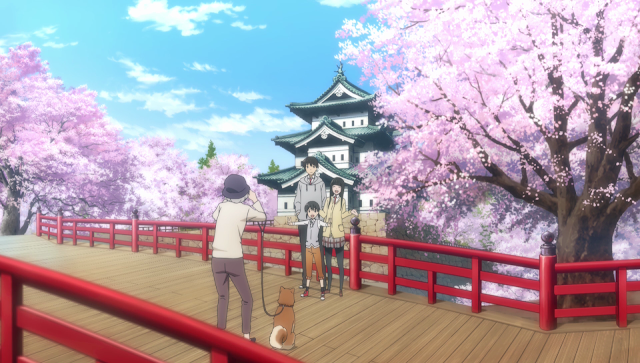 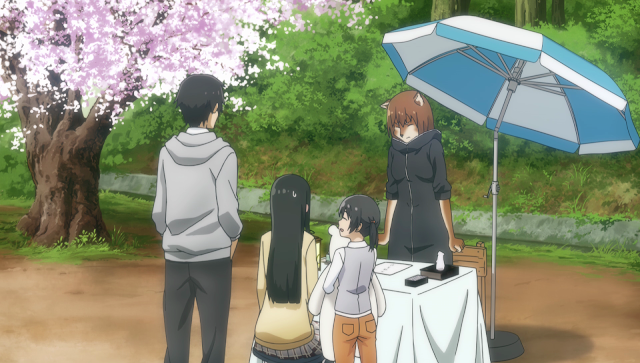 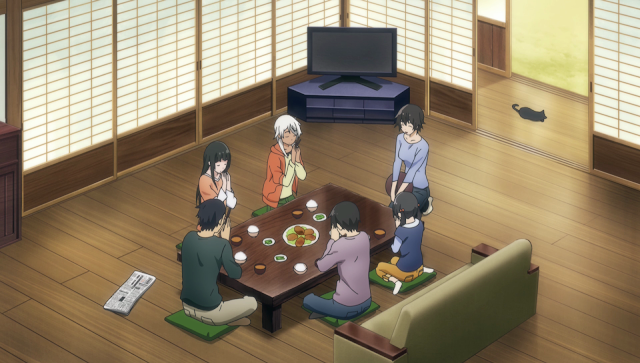 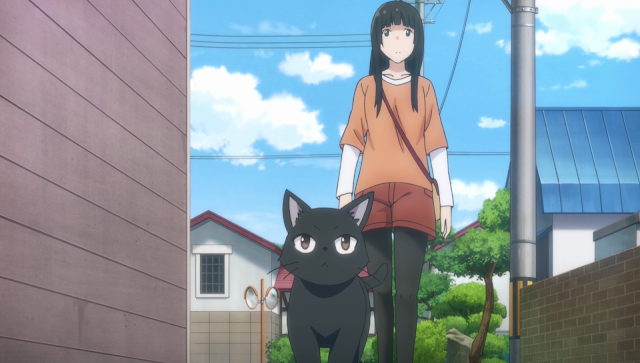 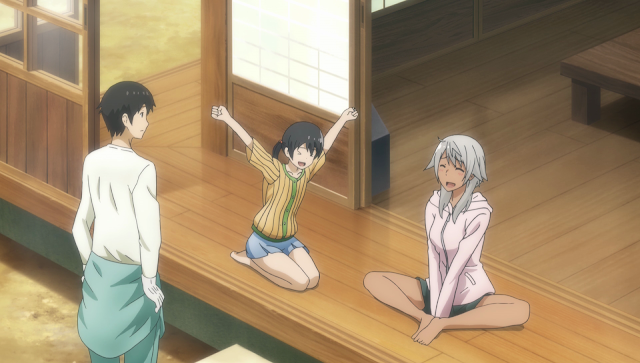 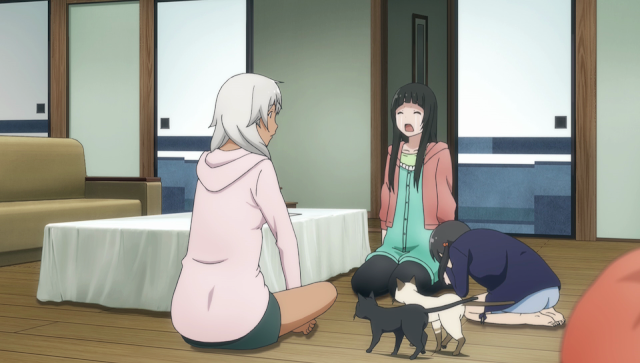 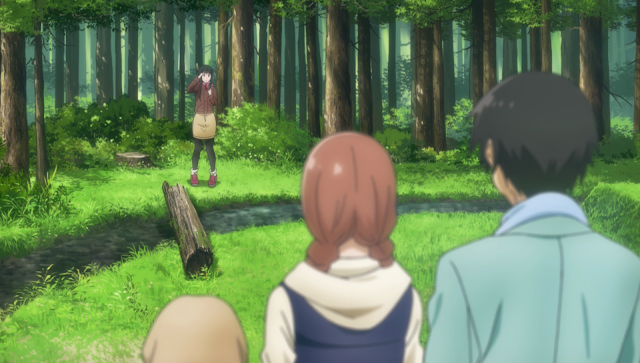 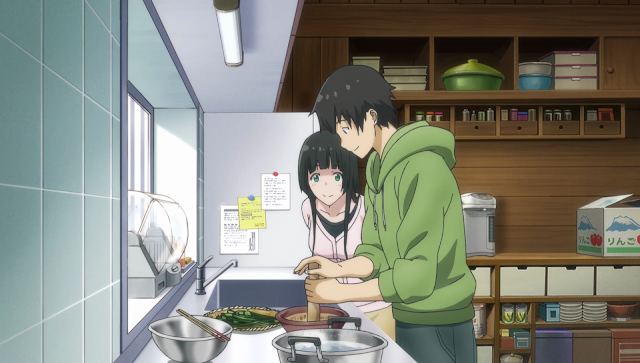 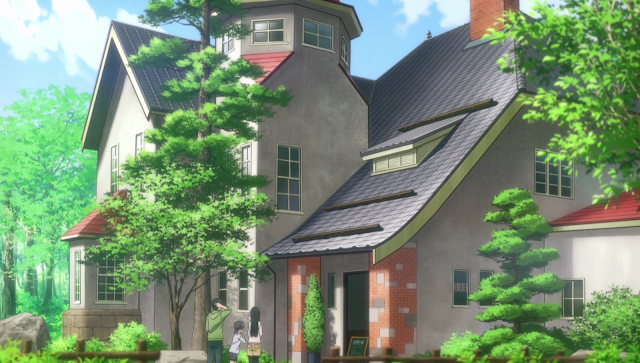 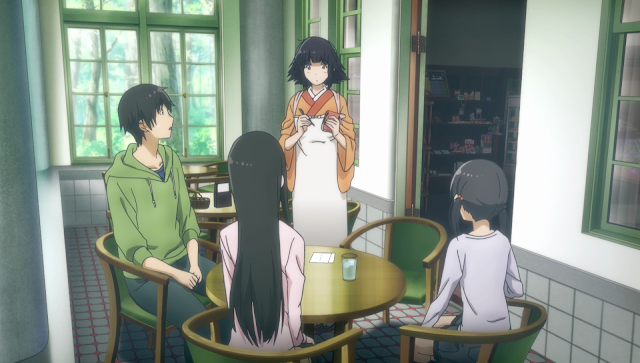 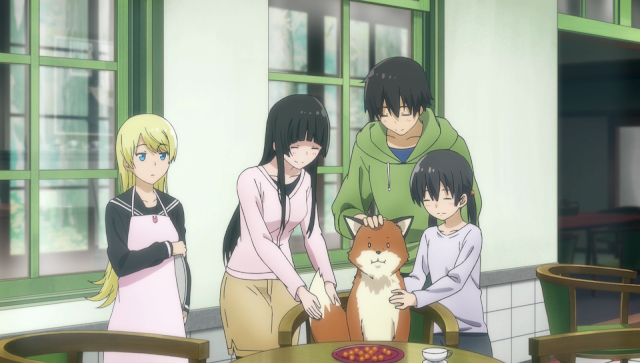 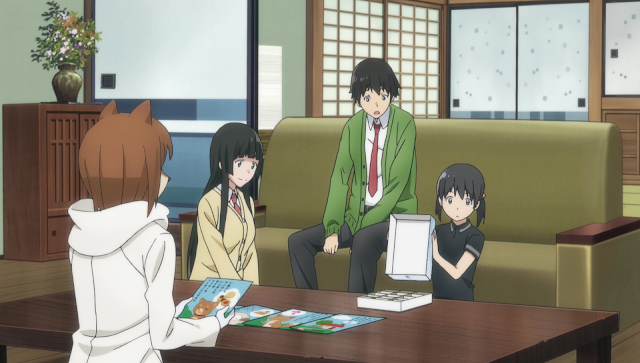 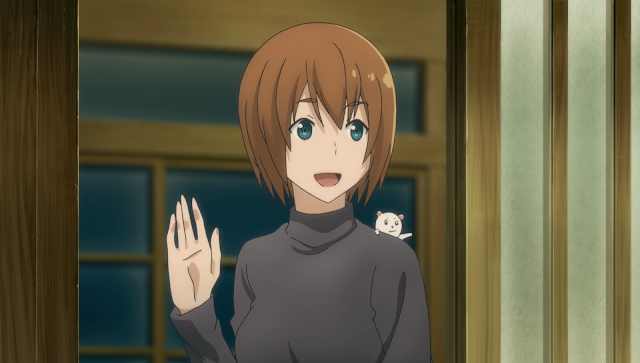 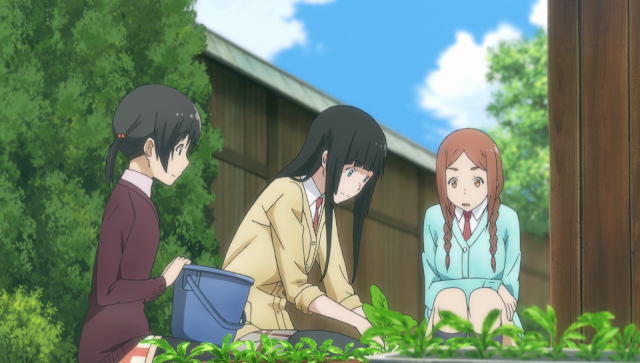 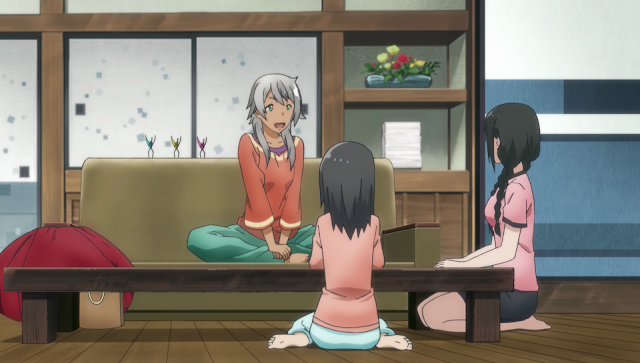 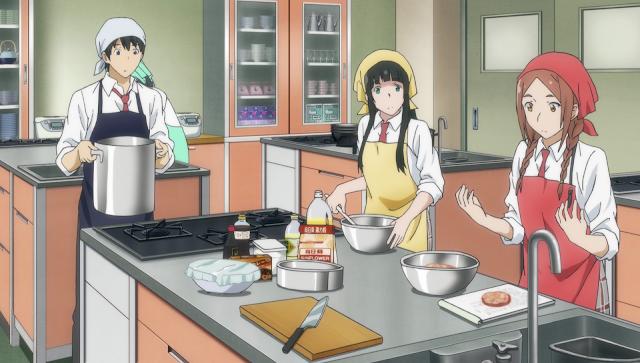 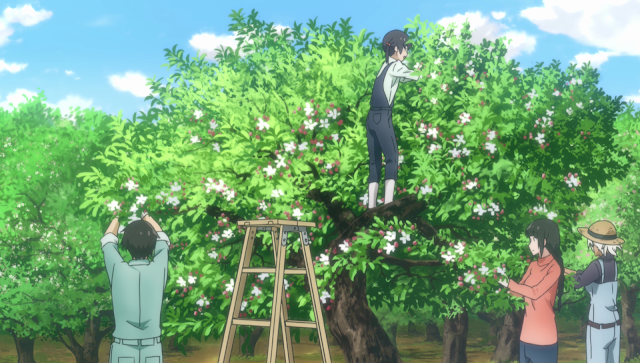 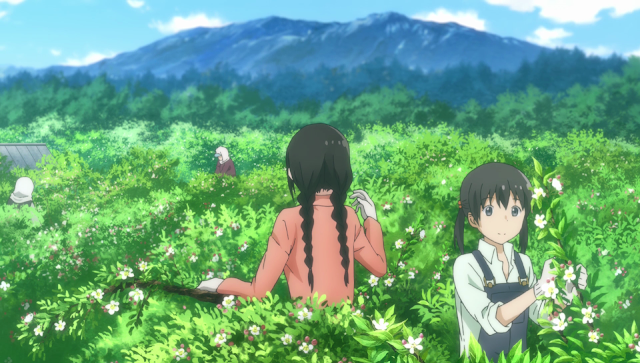 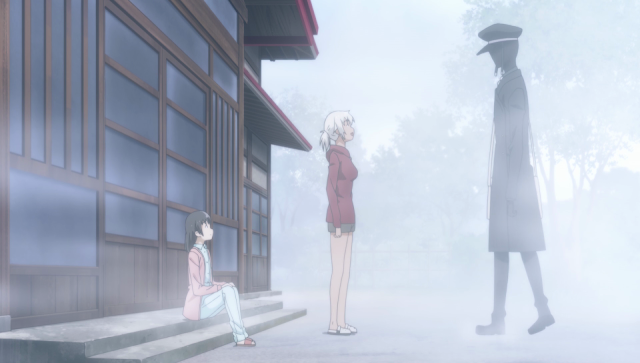 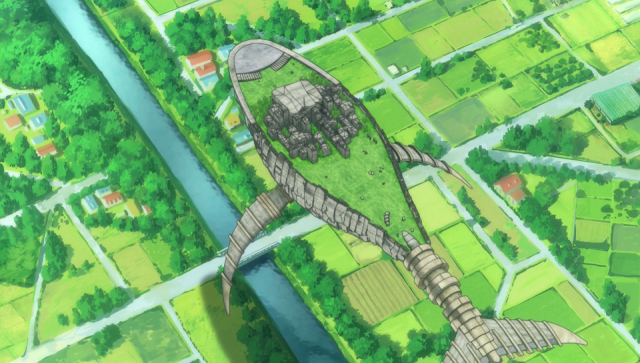 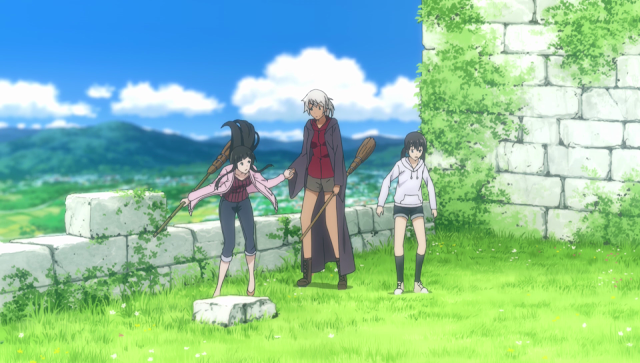 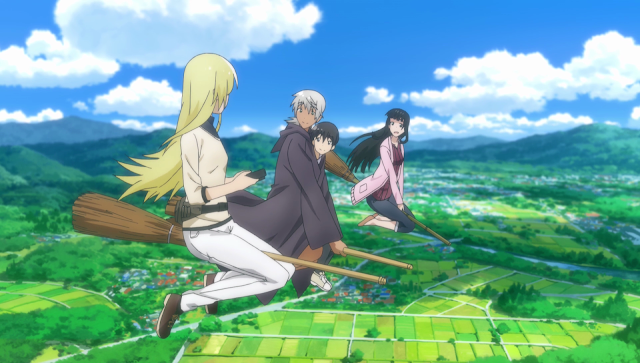 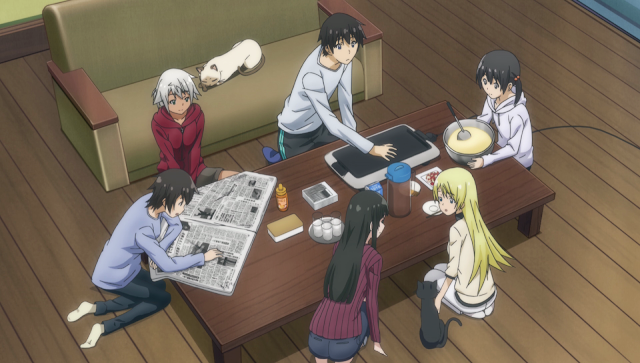 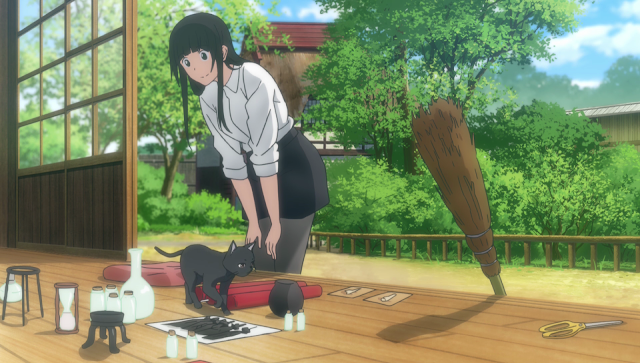 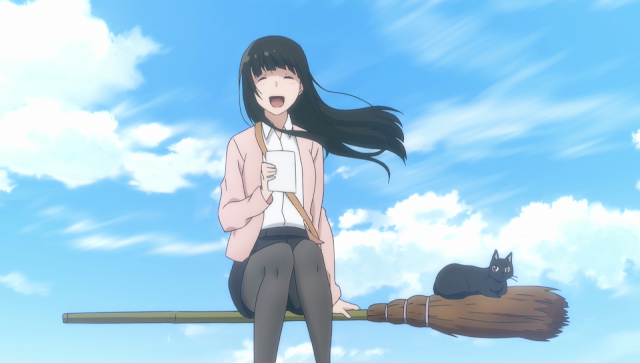 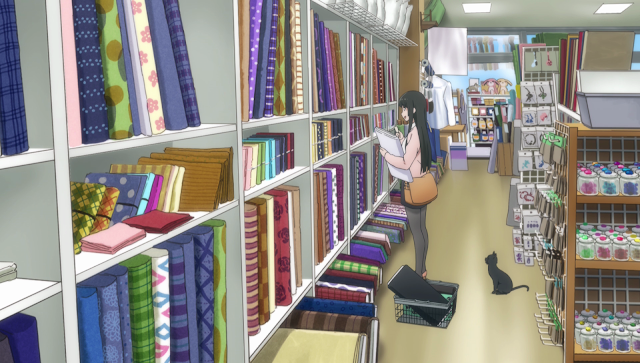 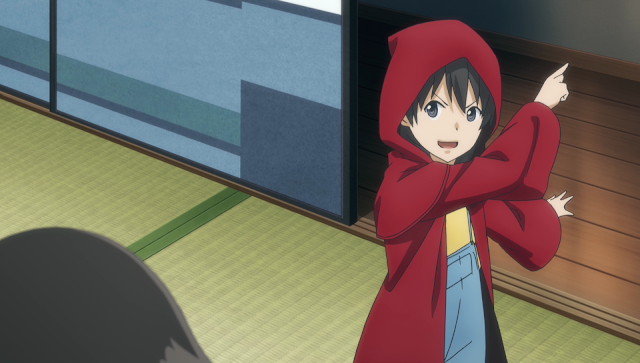 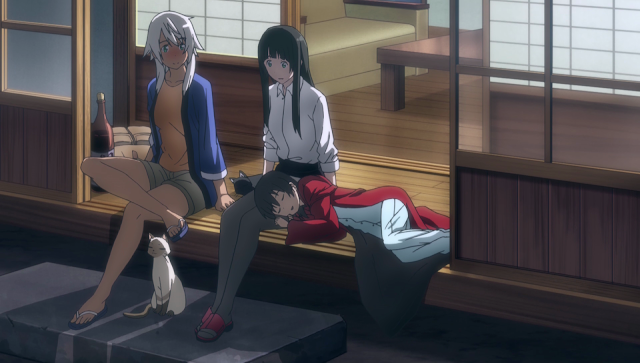 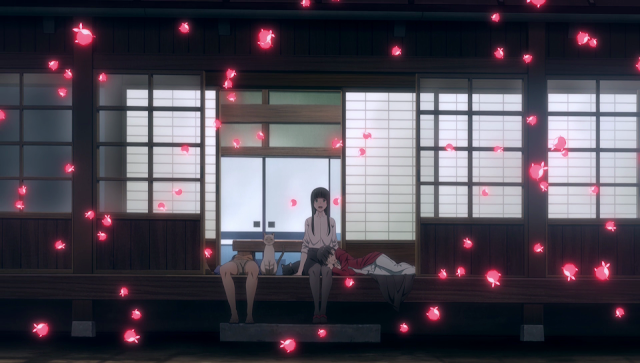 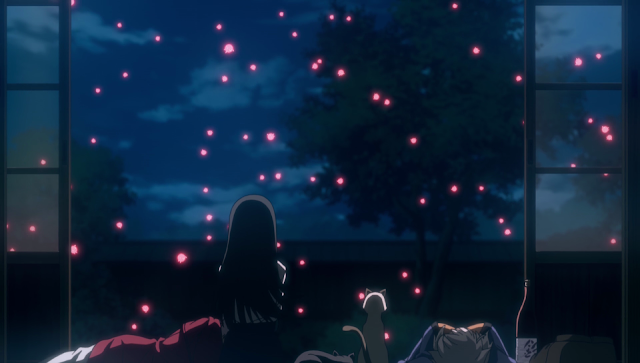 The verdict on Flying Witch is an easy one: it earns a strong recommend for all audiences for being able to capture the beauty and joy of the subtle, simpler things in life. Coupled with the peaceful setting of Aomori and its depiction in great detail, character dynamics that are warming and amicable, and a beautiful soundtrack that accentuates the atmosphere surrounding Aomori and Makoto’s everyday life, these elements combine to create a truly unique anime that appears to illustrate the interface between Non Non Biyori and Harry Potter in a completely new and welcome direction. Dispensing with typical anime tropes, Flying Witch chooses to intricately construct and present an incredibly detailed and noteworthy world that captures the audience’s interest. Then, the interactions among the characters allow Flying Witch to hold the audience’s interest. There are not many negatives that can count against Flying Witch, except perhaps that there isn’t a second season; all of these elements culminate to result in my final decision. Flying Witch is easily worth watching, and I note that for Minami Shinoda, her role as Makoto Kowata is her first. In spite of being new, she delivers a solid, consistently good performance in Flying Witch that does much to bring Makoto’s character to life.