First Battle: The Story of a Chair- Sora no Woto Second Episode Review and Reflection

“It would be difficult to write a convincing ghost story set on a sunny day in a big city.” —Susan Hill

After introductions to the remainder of the 1121st Platoon, Kanata is asked to explore their facilities with Kureha Suminoya. Despite Kureha expressing despondence that the 1121st is under-equipped and oft-ignored, Kanata manages to find joy in the facilities, known as the Clocktower Fortress. Later during the evening, Noël Kannagi, another member of the 1121st, claims that she’s spotted a ghost; to test their fortitude as soldiers, Rio tasks Kanata and Kureha to hunt down the source of the commotion. They reach the derelict ends of the fortress and realise it was once a school. Although they do not find any traces of spectral activity, they encounter the same owl that had taken off with Rio’s bell. After capturing said owl, they keep him as the team mascot and christen him Shuko. Much as how the first episode focused on portraying the locales in and around Seize, the second episode deals primarily in Kanata familiarising herself with the Clocktower Fortress’ layout and facilities. Aspects of the world in Sora no Woto are further shown via maps found in the Clocktower fortress, with a vast no-man’s land separating habitable regions. All of these elements, seemingly minor and easy-to-miss, serve as foreshadowing for events to occur in later episodes. With that in mind, the first episode is set predominantly on the dynamics between Kanata and Kureha.

Ever-optimistic and cheerful, Kanata’s personality is presented as the polar opposite to that of Kureha, who attempts to convey a sense of seriousness and devotion to her task even in light of the knowledge that other sections of their military do not supply the Clocktower Fortress’ soldiers with adequate provisions or instructions. Whereas Kureha sees a deficiency that exists to be rectified, Kanata sees value in most everything she encounters, making the most of the moment and whatever is available at hand. These disparate personalities mean allow Kanata and Kureha to bounce off one another as they carry out their initial assignment of tracking down a ghost, and although it will take the Kureha additional episodes to warm up to Kanata, it becomes clear that the contrasts in their characterisations allow both to mature as the series progresses. This dynamic is surprisingly similar to the one seen between K-On!‘s Yui Hirasawa and Azusa Nanako, although in a different setting, the impact that both individuals have on one another serve to fulfill a different purpose. 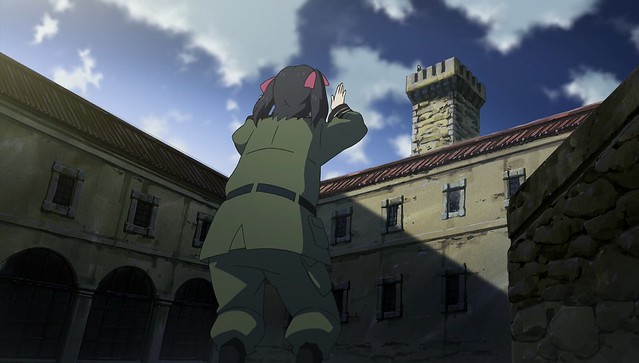 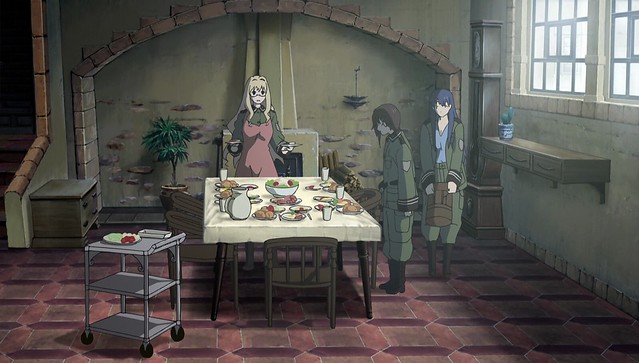 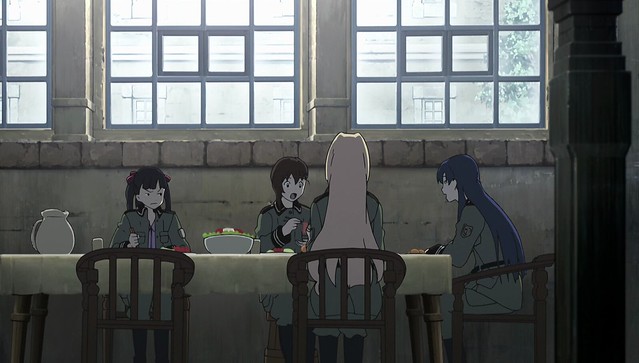 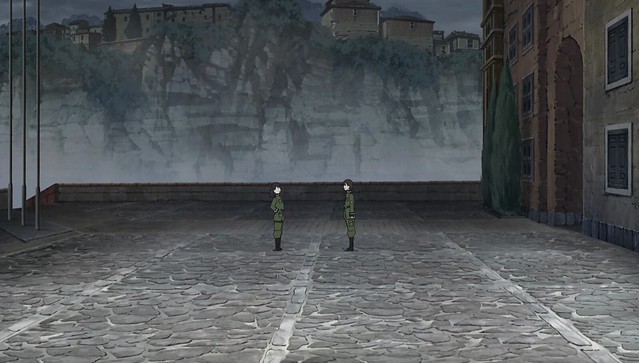 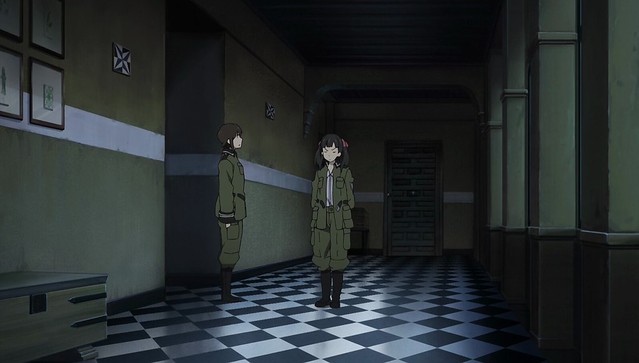 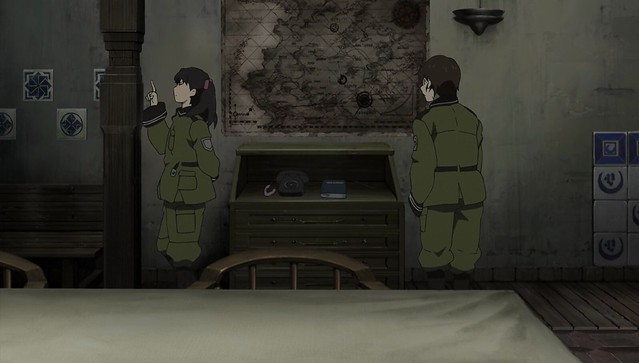 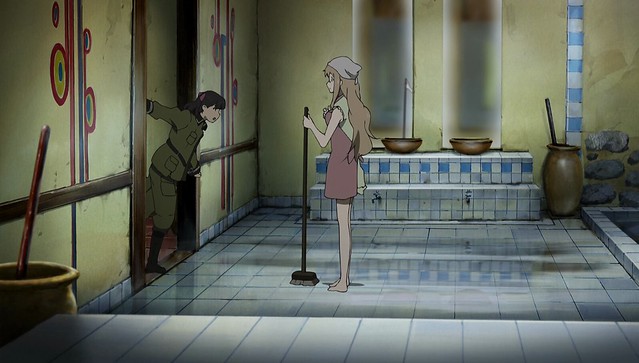 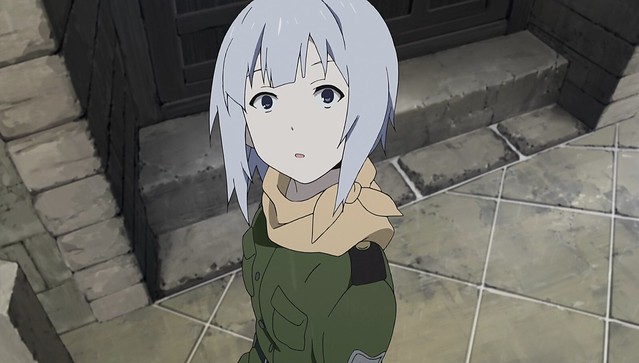 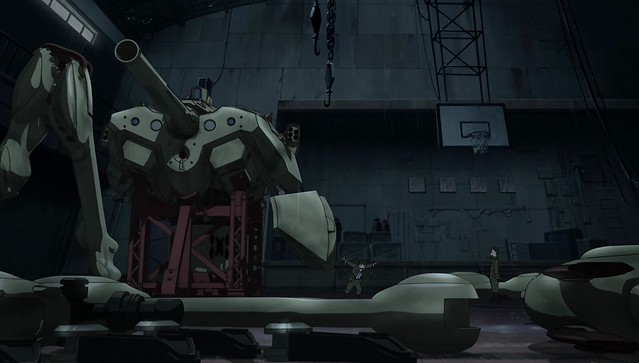 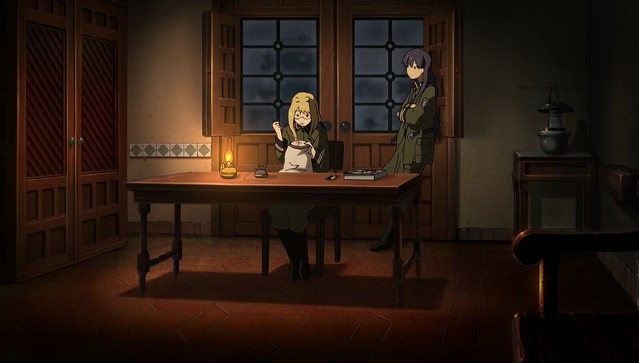 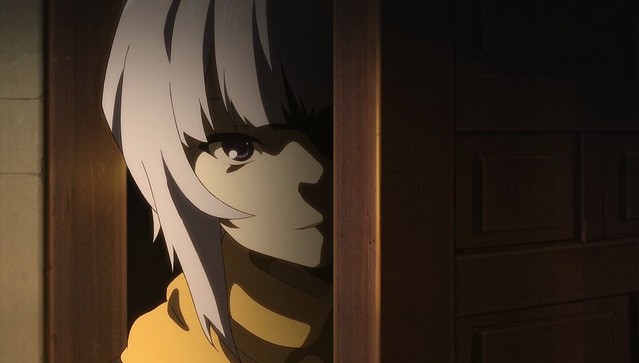 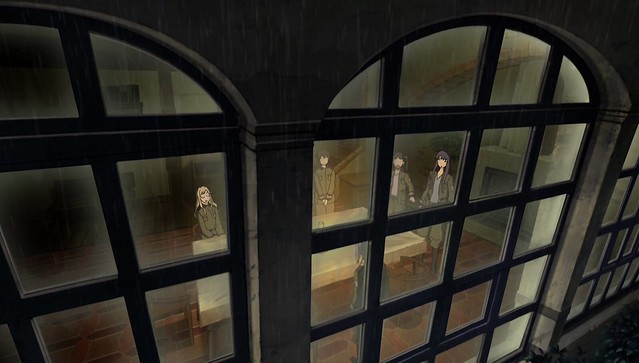 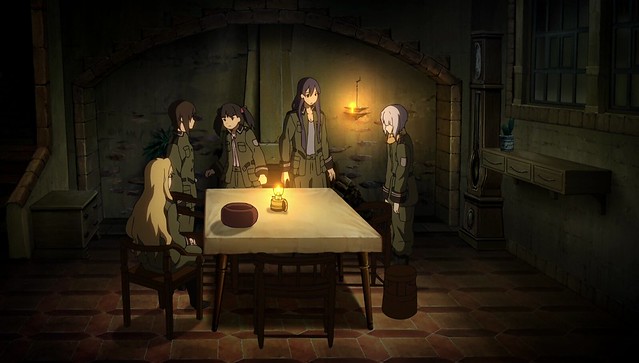 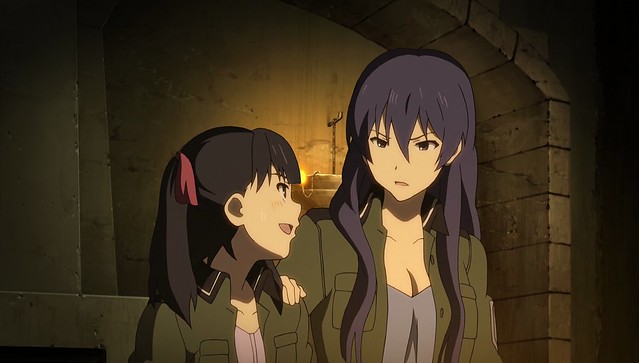 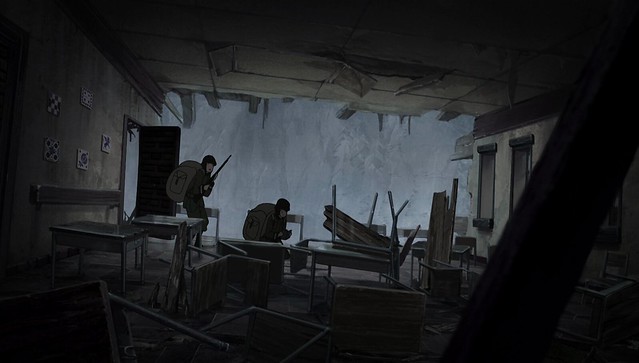 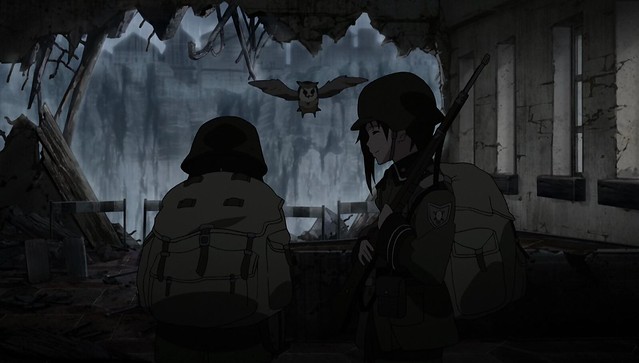 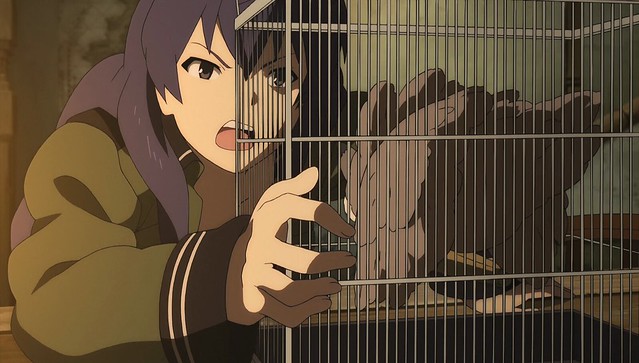 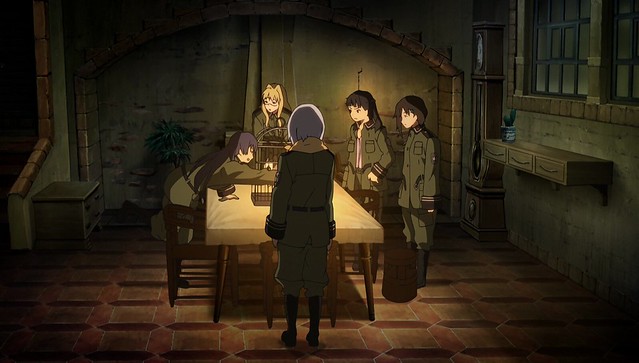 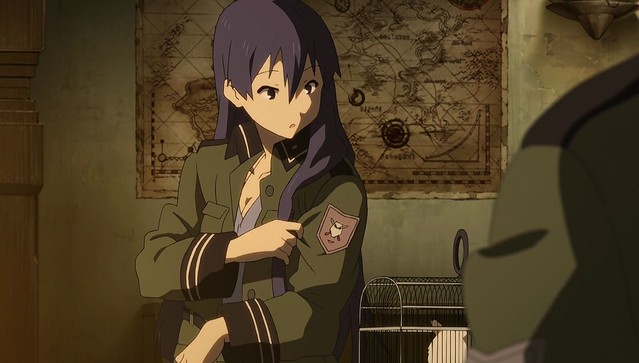 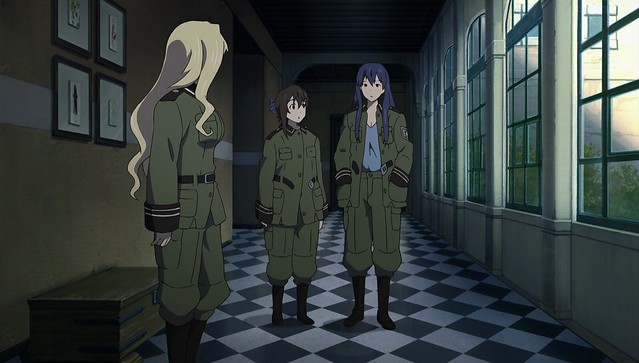 The single most dramatic element in the second episode is the presence of a ghost: while the absence of additional information could easily allow one to dismiss the ghost as a defect in animation or a simple Easter Egg, supplementary materials clarify that the ghost was the residual spirit of a girl who died before the war that devastated the world. Trapped on Earth, it is ultimately Rio who helps this spirit move on, and she is not seen again at the Clocktower Fortress. It typifies Sora no Woto‘s expert capacity to utilise their characters in a seemingly mundane task to further outline both their interactions and details pertaining to the world that Sora no Woto is set in: even something as simple as the 1121st’s base of operations is an intriguing location with a past so rich in detail. The use of weather further serves to accentuate the atmosphere; weather patterns and the associated lighting are used to great effect in Sora no Woto to drive specific messages across in future episodes.

One response to “First Battle: The Story of a Chair- Sora no Woto Second Episode Review and Reflection”