“Hey chief, you screwed up. There’s nothing in here.”
“Oh, it might appear empty, but the message is clear. Play Santa again, and I’ll kill you next year!”
— Bender and Robot Santa, “A Tale of Two Santas”, Futurama

Kiniro Mosaic: Pretty Days released back in November 12, 2016; it was only a week ago that it finally became available, and if this is the trend for OVAs, I imagine that the wait for the upcoming Gochuumon wa Usagi Desu Ka?? OVA could be a non-trivial one, as well. With preparations for the culture festival ongoing, Shinobu finds herself completely immersed in her class project, contributing both the script and her considerable talents as a seamstress to making costumes for everyone. Amidst the busy activities, Aya finds herself feeling distant from Shinobu, wondering if Shinobu is closer to Yoko, Alice and Karen for their own attributes. When Shinobu steps out with Isami, Aya begins to reminisce about the time she’d spent with Shinobu in middle school, where Yoko and Shinobu were struggling with examinations for high school. While on break one day, they take a walk and visit Moegi High SChool, where they run into Sakura and get a tour of the grounds. After guidance from Aya and much effort on Yoko and Shinobu’s part, the girls manage to make it into the same school; Aya herself had her sights set on a more prestiguous all-girls school, but decides to join Shinobu and Yoko at Moegi high when they are all accepted. Back in the present, the play itself hits a hitch when the student playing the princess is afflicted with the flu, forcing Aya to step in. Despite the play starting off on the wrong foot, the girls pull together and manage to improvise something with Shinobu’s help, turning the play into a success. In the aftermath, Aya is grateful to have chosen the same high school as Yoko and Shinobu. A touching story with the light-hearted, warming feel that Kiniro Mosaic excels at presenting, Pretty Days is a welcome return to a series characterised by a colourful group of characters whose life in high school is filled with hope, wonder and a never-ceasing sense of cheerfulness.

In its premise, Pretty Days is centered around Aya and her memories of middle school with Yoko and Shinobu. While she’s initially doubtful that her friendship with Shinobu is a strong one, Yoko recounts their pivotal moment in middle school when it was Aya who motivated the two to buckle down and study for their entrance examinations such that they could be admitted to the same school. Even when Aya receives an admissions offer from a more prestigious academy, she ultimately turns down their offer, suggesting the strength of their friendship with one another. Although such an action might be seen as a poor decision from a certain perspective, Pretty Days presents this as a heart-warming choice that underlines just how strongly Aya cares about her friends, if she’s willing to pick being with them over a high school that might help her with post-secondary admissions. In addition to a well-executed central narrative, Pretty Days also brings back all of the elements that made Kiniro Mosaic so entertaining, whether it be Shinobu’s gifting of “heart” to her friends, or her determination to ensure the success of their class play, exhibited when she goes to the length of improvising lines for Karen and Aya when their original play disintegrates after Karen completely forgets her lines. The end result is fifty minutes of comedy that captures the spirit of Kiniro Mosaic, being an indispensable watch for all audiences who’ve enjoyed Kiniro Mosaic. While folks entering sans familiarity with Kiniro Mosaic may find some elements in the OVA a bit unusual, the overall pacing and structure means that this OVA can still be quite enjoyable. 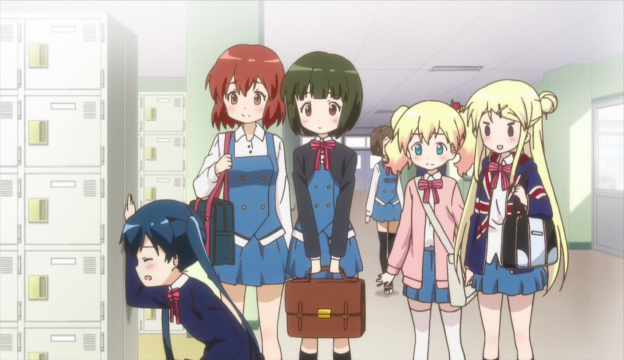 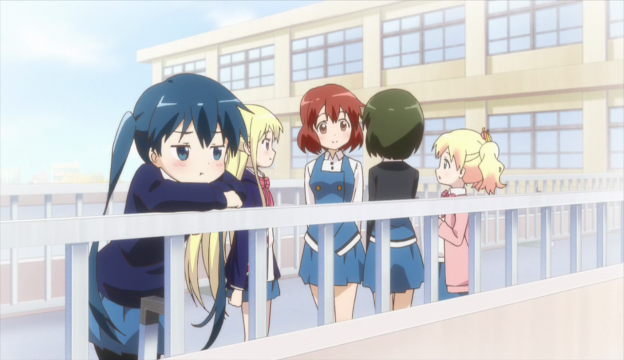 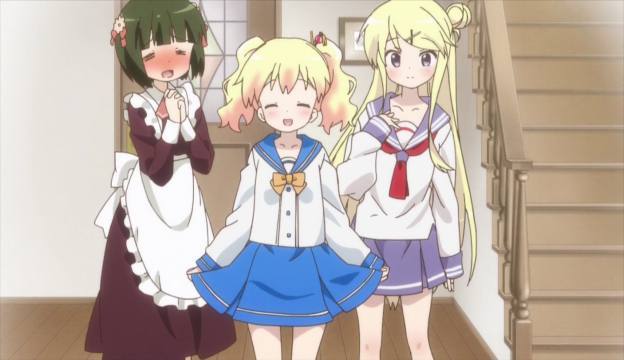 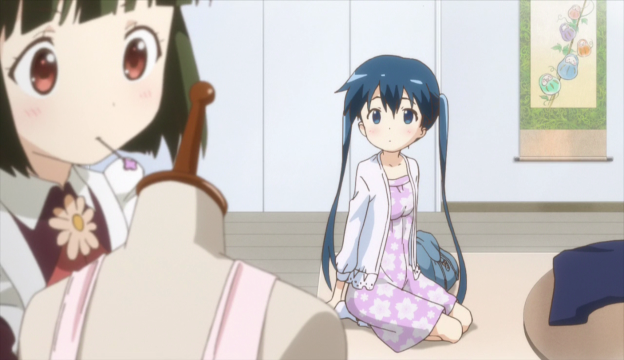 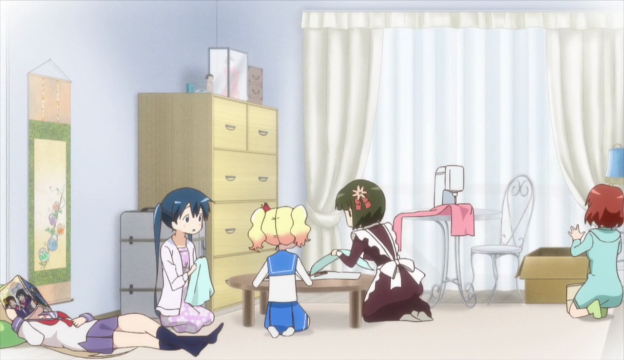 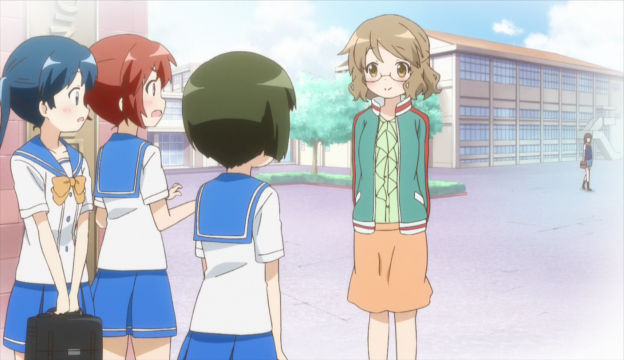 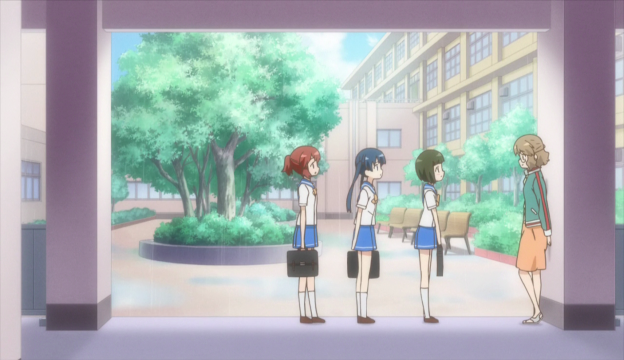 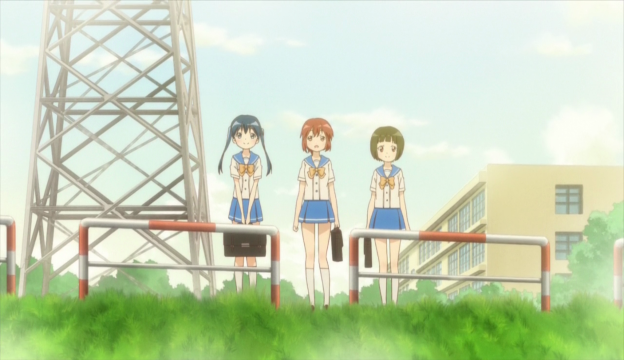 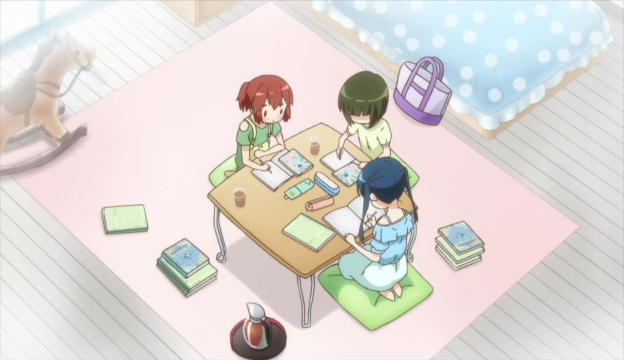 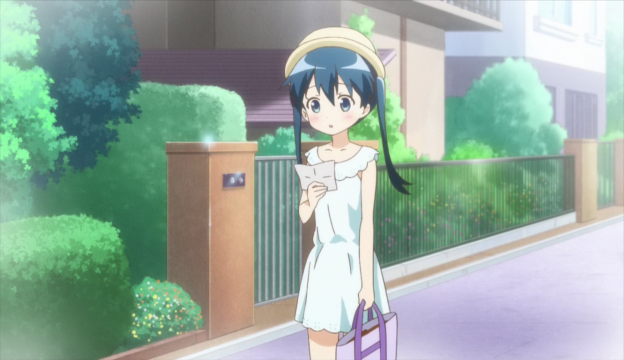 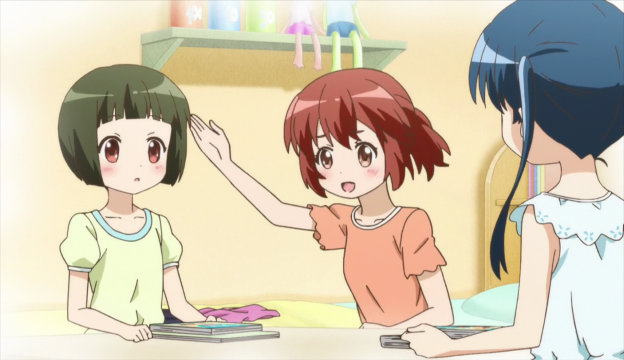 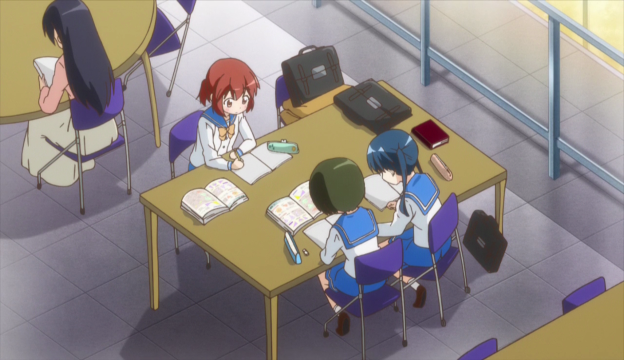 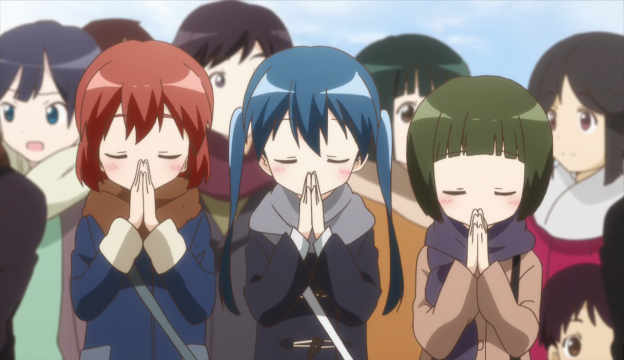 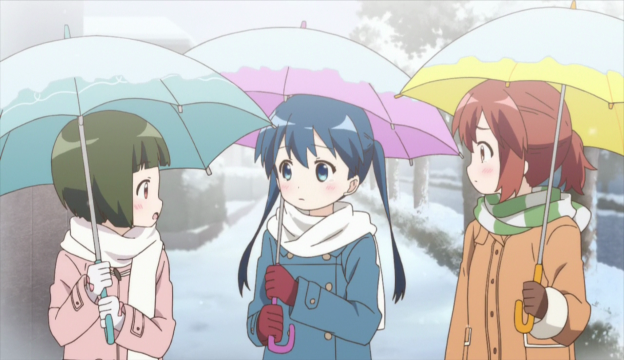 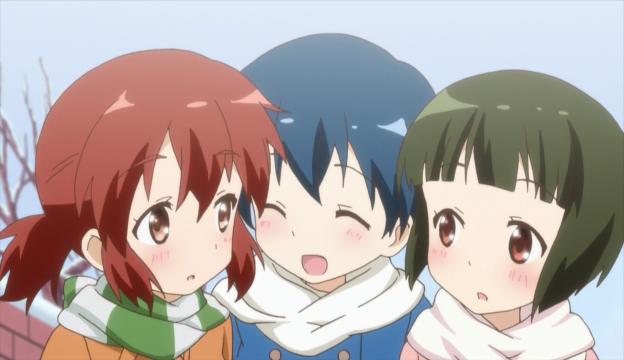 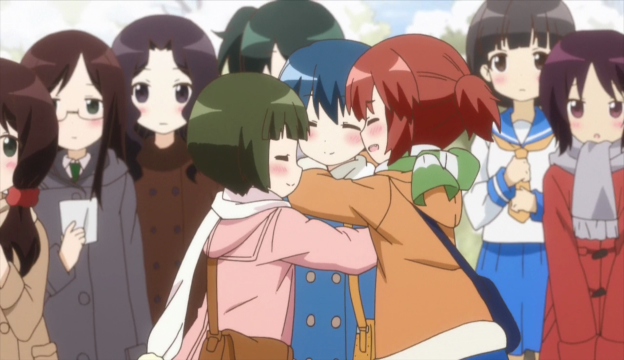 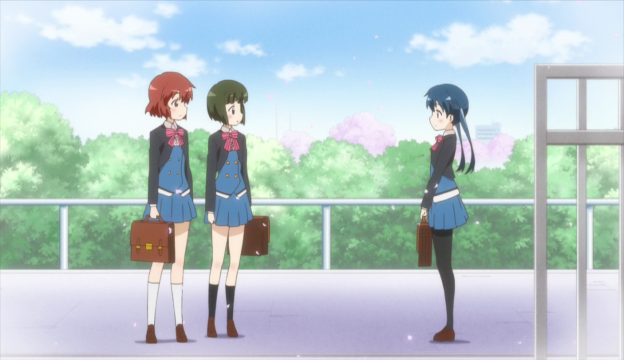 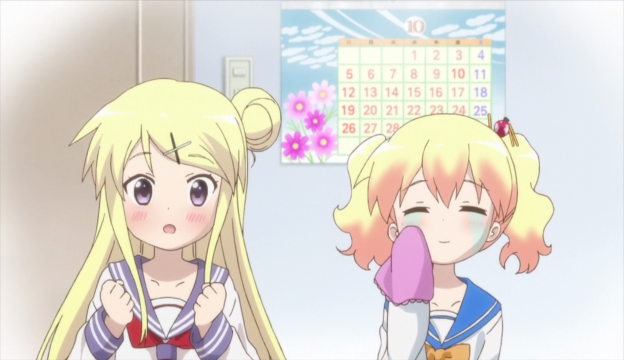 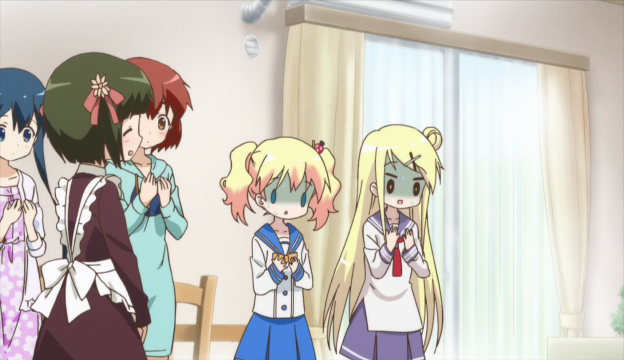 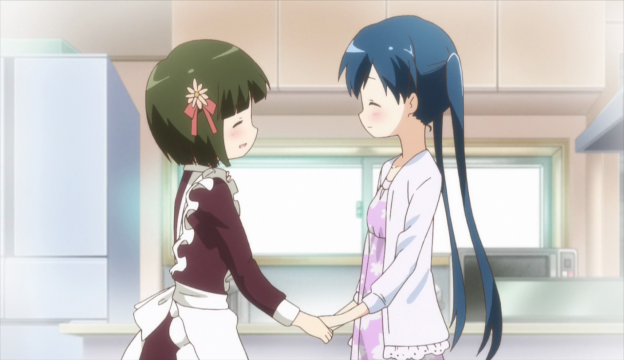 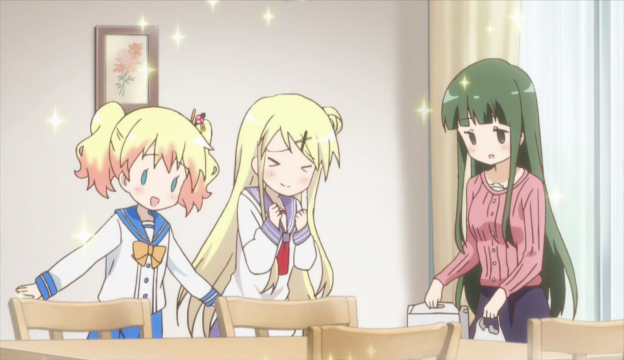 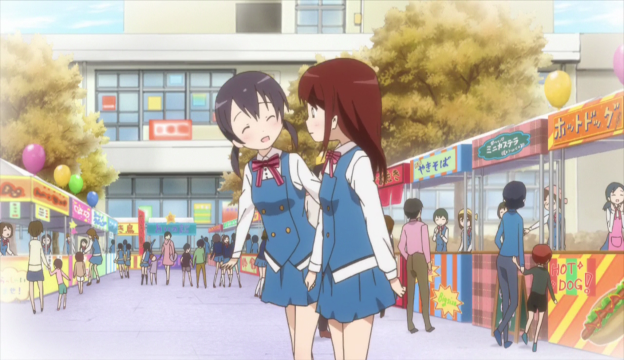 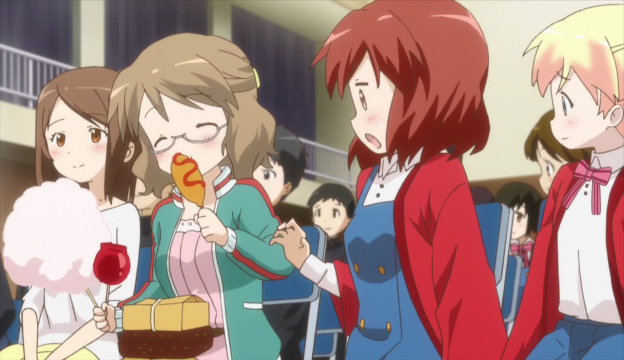 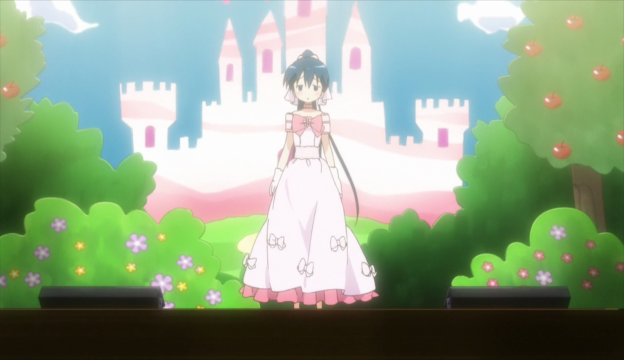 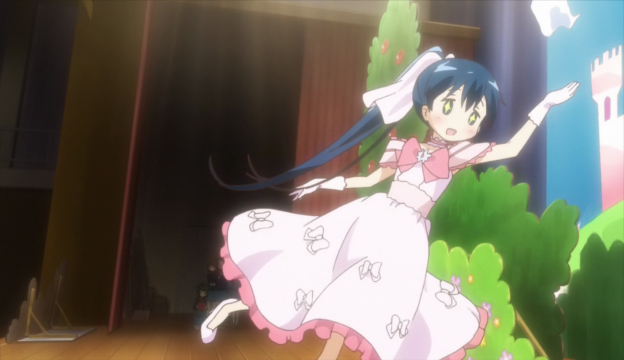 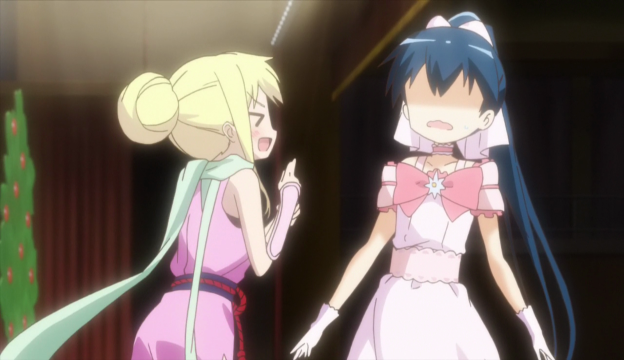 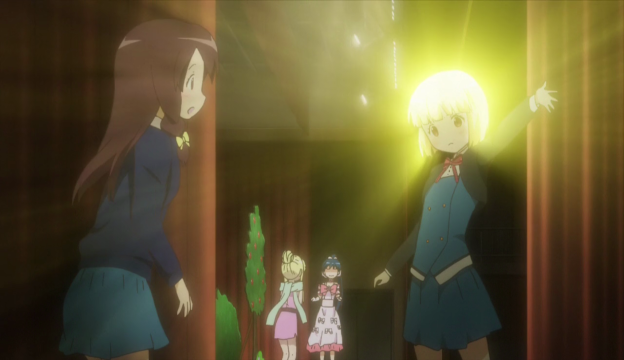 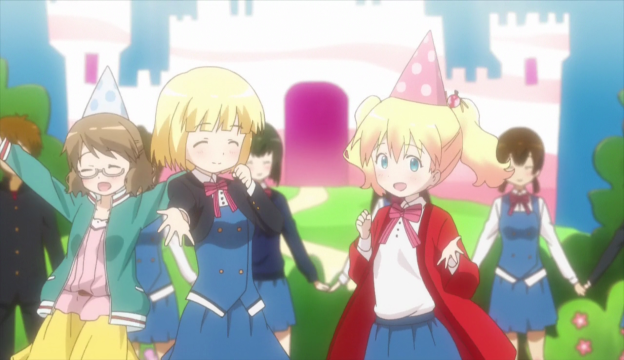 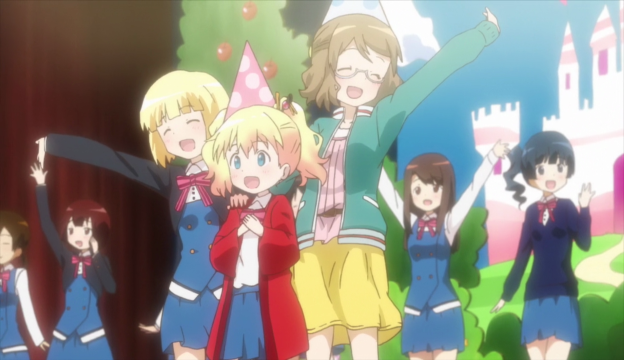 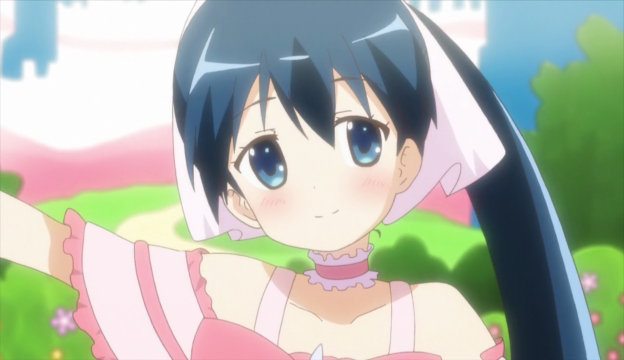 As is the modus operandi for OVA posts, one wonders if the OVA is the end-game, or merely a stepping stone for a continuation. Kiniro Mosaic performs reasonably well with respect to sales, and with the manga ongoing, it is possible that an animated adaptation depicting Shinobu and the others’ third year could come to fruition in the future, dealing with the girls as they finish their third year and move towards graduation. Nineteen months separated the first and second seasons, and by this trend, if Kiniro Mosaic is to receive a third season, it would likely be aired during the Winter 2018 anime season, just slightly less than a year from now. In comparison to my remarks that a second season of Yuyushiki, would be unlikely owing to how much time has elapsed since 2013, Kiniro Mosaic has already received its second season: the Pretty Days OVA comes at an intermediary point, so I am a bit more optimistic about the prospects of a third season. A continuation of Kiniro Mosaic would therefore be most welcome, acting as a conclusion of sorts to the series. Aside from graduation, a continuation could also open the possibility of Shinobu and her friends visiting England once more before they set off for whatever their futures have in store for them (with this being said, such an adventure might even be presented as a movie).