2 Comments Posted by infinitezenith on April 6, 2017

Eriri and Megumi book accommodations at a hotel with Utaha’s help in order to help design artwork for their game further, but their efforts decay as Izumi and Michiru show up. After being subjected to various incidents up on the pool deck, Tomoya tries to take off by evening, but Utaha manages to haul him off with the intent of spending the evening alone with him. These plans are foiled, and Michiru shows off the music she’s composed for their game so far. Later, Megumi and Tomoya share a moment together, promising to continue working on their game in order to make it a success. This pre-season episode marks the beginning to Saenai Heroine no Sodatekata ♭ (read “Saenai Heroine no Sodatekata Flat“, Saekano ♭ for brevity), a series that follows aspiring doujin game developer-to be Tomoya Aki and his raggedy-ass team as they aim to release a full-fledged visual novel in time for the upcoming Comiket event. While excelling at nothing in particular, Saekano’s first season remains memorable for its self-referential humour and array of unfortunate events that befall Tomoya as Utaha, Eriri and Michiru vie for his heart even as they strive to put their best into the development work and complete their game ahead of their deadline.

As its predecessor had before it, Saekano ♭ opens the season with a prelude set midway into the season and development cycle, presenting an episode that establishes the dynamics amongst the individuals of Blessing Software. As unrealistic as these interactions are, watching Tomoya try to worm his way out of difficult situations with the more assertive ladies in his group is remarkably entertaining. With this in mind, this is probably the strongest point about Saekano; the previous season depicted a team coming together against their own initial assumptions, working towards a shared goal. However, Saekano as a whole chose to abstract out the game development component: Blessing Software only has two dedicated developers, with Tomoya himself running the Visual Novel Engine and Megumi learning the software to be of assistance. Utaha, Eriri and Michiru are involved in the other aspects of the game. I was initially curious to see how software development would figure in Saekano, hence my picking it up but the first season made it clear that this aspect would be secondary to the elements over top, namely, the narrative, artwork and audio aspects. It’s an interesting (and not misplaced) perspective on games, suggesting that cutting edge engines, the latest rendering techniques and proper software practises alone do not make a game (as both DICE and Activision are discovering as of late). Ultimately, I chose to continue watching Saekano because the events the characters finding themselves in proved to be quite entertaining, offering a different (although not revolutionary) take to a genre that has been saturated with clichés. 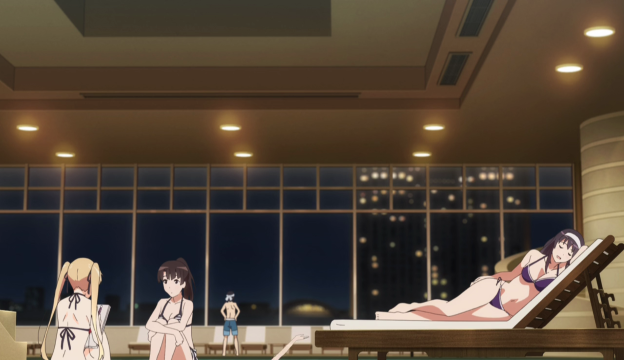 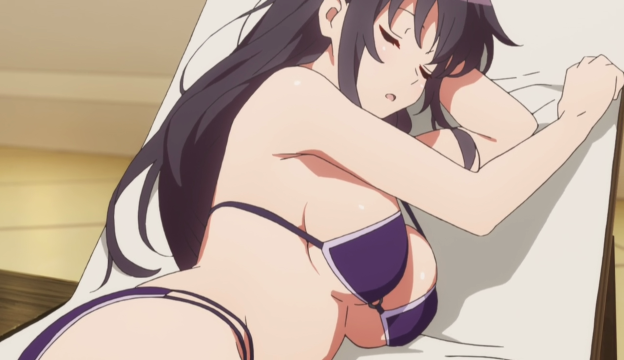 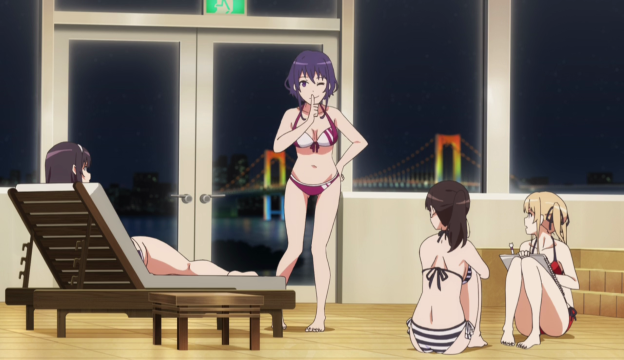 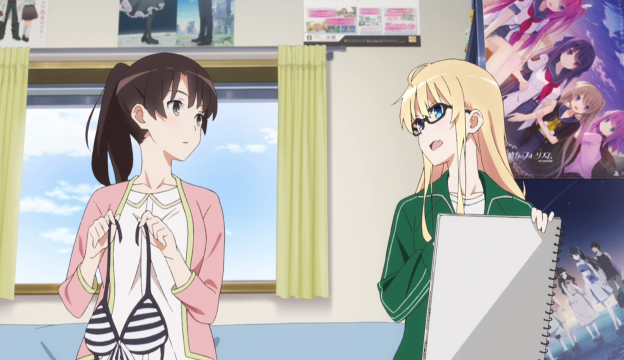 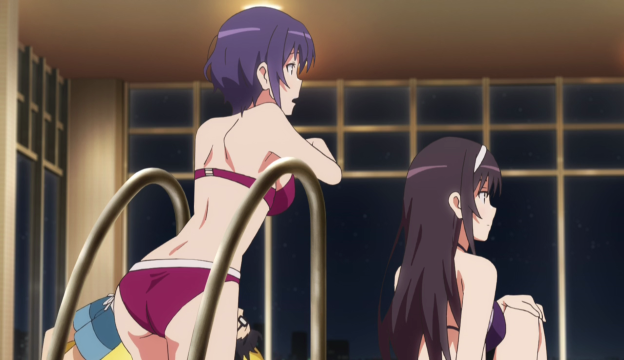 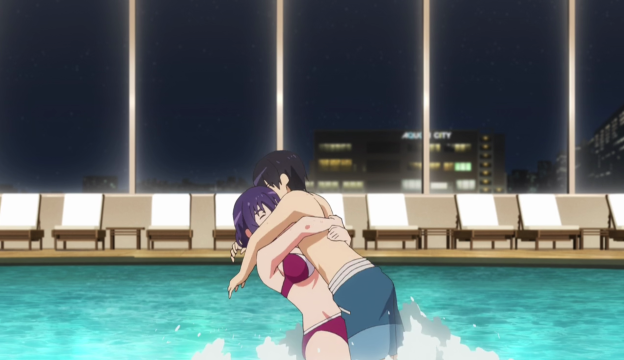 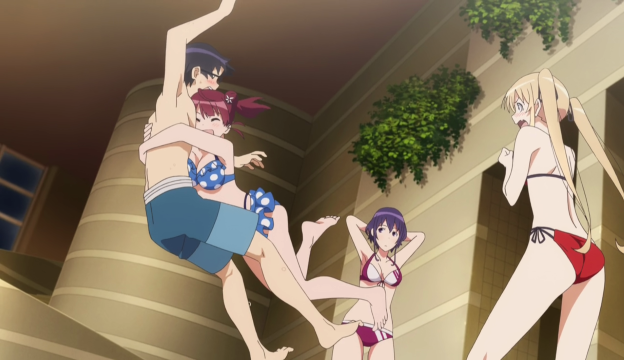 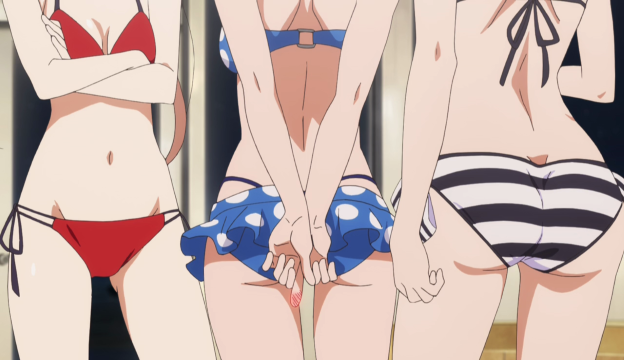 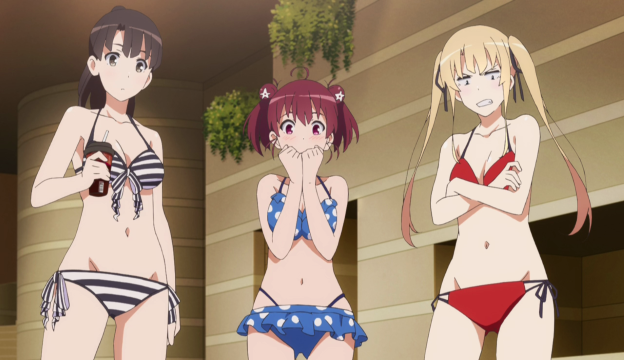 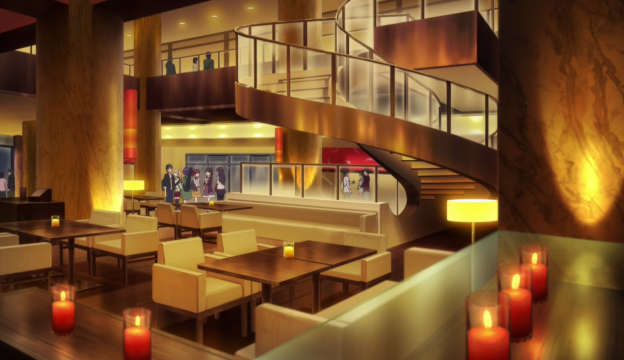 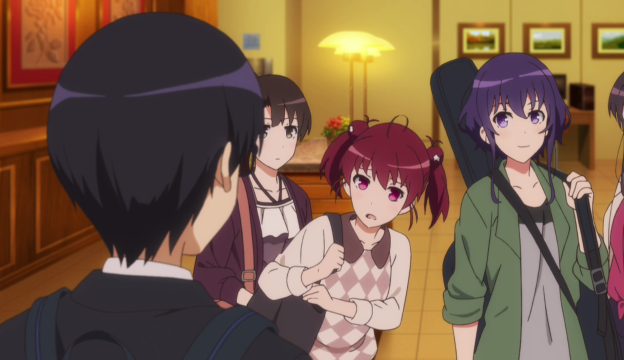 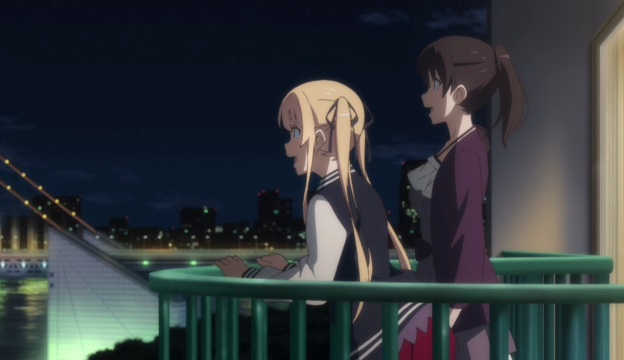 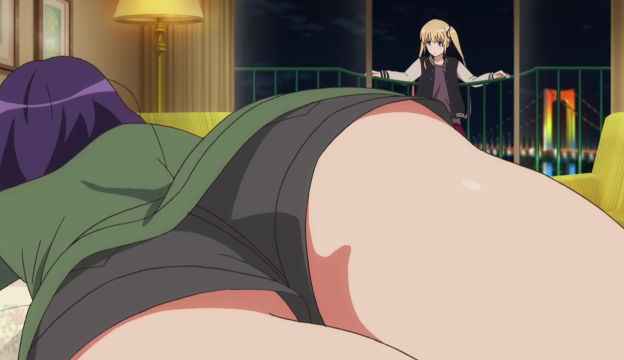 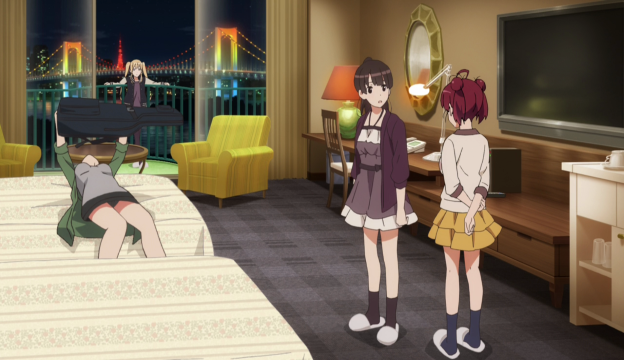 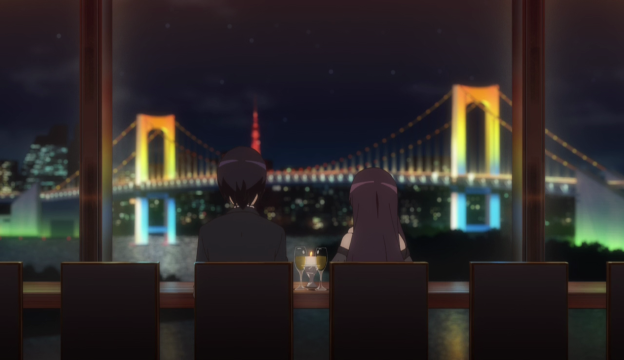 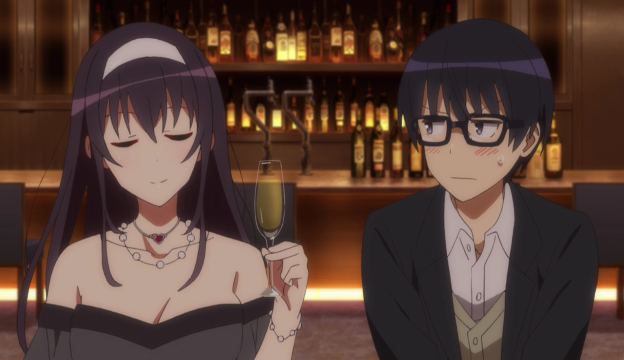 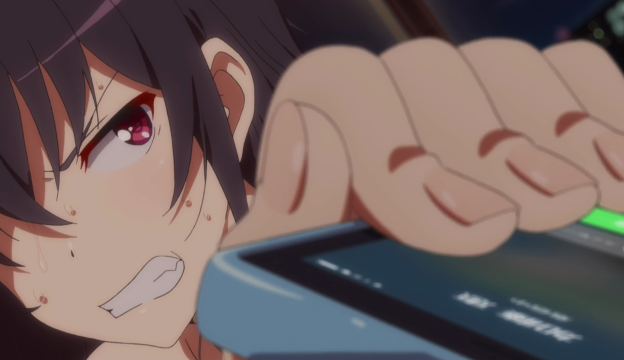 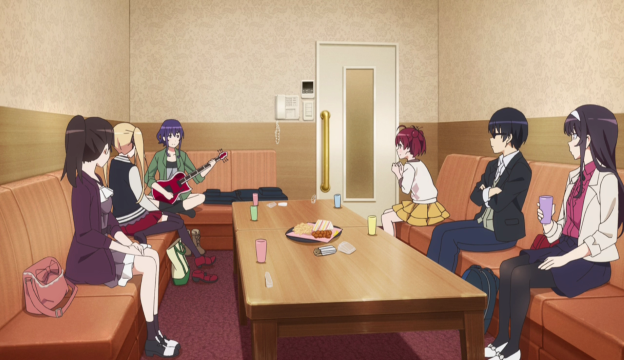 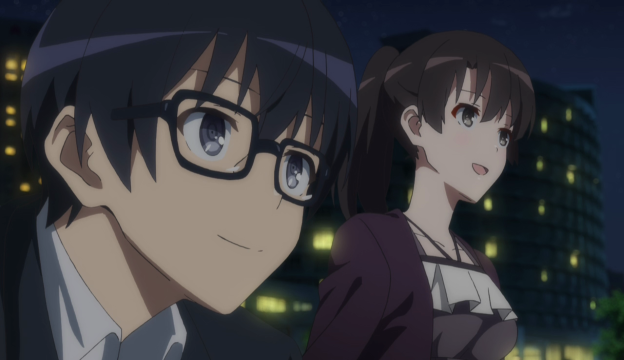 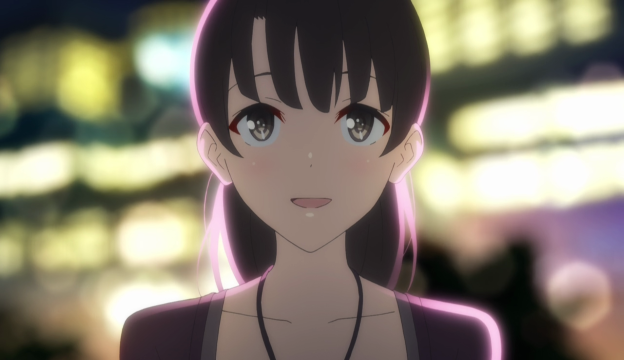 Hence, looking forwards into what Saekano♭ will offer, I imagine that the continuation will be more of the same as the first season, although there will be an opportunity to craft new situations as Tomoya finds the deadline nearing. With this in mind, the rewards of game development are plainly secondary in Saekano: the main draw of this anime stems from Tomoya and his unique group of developers that have become closer as friends, even if they do bounce off one another more often than not. This invariably leads to the question of whether or not Tomoya will end up in a relationship with any one of the female leads; typically, writers tend to avoid this in order to avoid drawing negative reactions. However, protracting this causes the story to drag out, and further results in interactions that come across as static, unnatural. Hence, it will be interesting to see whether or not Saekano♭ will take things in a new direction within the span of this season and have him enter a relationship with Megumi (minimally, becoming closer to her than the others), or if the status quo will be preserved. I look forwards to seeing what happens in Saekano♭ as things progress: even if nothing substantial comes out of it, minimally, there will likely be opportunities to see Utaha and Michiru mess with Tomoya in ways that could never occur in reality.