“‘…and the sea will grant each man new hope, as sleep brings dreams of home.’ Christopher Columbus.”
“Welcome to the New World, Captain.”

— Captain Ramius and Jack Ryan, The Hunt For Red October

After relaying her concerns to Mashiro and Akeno, Kouko is tasked with gathering everyone in the Harekaze class for a general assembly. Rather than idling while waiting for the deadline, Kouko decides to initiate a petition to save the Harekaze, and sets out to find her classmates at their usual hangouts. From the conversations shared by the various classmates, all of the students are troubled by their purported situation and sign onto Kouko’s petition, which also doubles to restore her spirits. On the day before their sealed orders can be opened, the Harekaze’s crew put on a festival with the hope of raising more awareness to the cause with help from Moeka and Wilhelmina’s fellow classmates. Despite a slow start, the festival sees a large number of attendees who sign onto the petition. Their event is successful, with their petition gathering a large number of signatures, and on the morning the students are permitted to open their orders, the Harekaze’s crew learn that they are to remain together under Akeno’s command, operating the Okikaze, a new vessel outfitted with operational gear from the Harekaze. Principal Munetani remarks to Akeno that the vessel can be re-designated the Harekaze, and with their new home in order, Akeno sets sail on their next adventure together with her classmates. Thus, the second of the Hai-Furi OVAs comes to a close, wrapping up in a manner that was quite welcomed even if it was foreseeable.

In spite of the melancholy ending of its precursor, the second of the Hai-Furi OVAs manages to maintain a very cheerful atmosphere. Kouko’s fears from the previous OVA turned out to have been from confirmation bias, and my speculation turned out quite close to the actual events — I had suggested that teamwork could make up a large portion of the second OVA and would result in the crew working towards bringing back the Harekaze by repairing the original vessel. Although not true in its entirety (the original Harekaze is destined to be scrapped), the Harekaze is reborn and brought back in a manner of speaking. The events of the OVA continue to build on the thematic aspects seen in the TV series, and serve a twofold purpose. The strength of the bonds amongst the Harekaze’s crew allow them to now function quite cohesively, and their faith in Akeno as a captain only serves to augment their capability. Far from being the ship that was home to the misfits, the Harekaze’s students have proven time and time again that they can pull through together to get the job done. This is not diminished even with the revelation that the Harekaze’s crew would not be disbanded: the implications were that, petition or not, their exemplary actions are worthy of praise and noticed by their command. There was never any threat or risk that they would be disbanded; how the girls responded to circulating rumours merely serves to reiterate the points raised in Hai-Furi‘s original run. 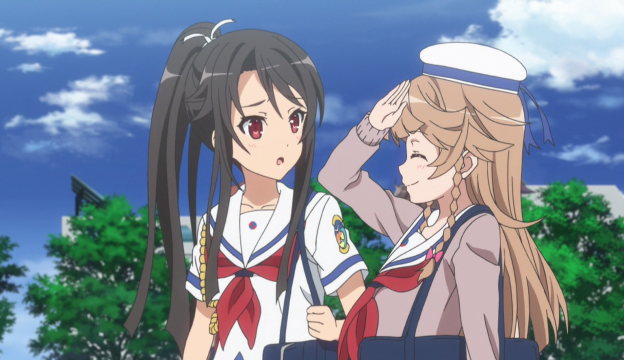 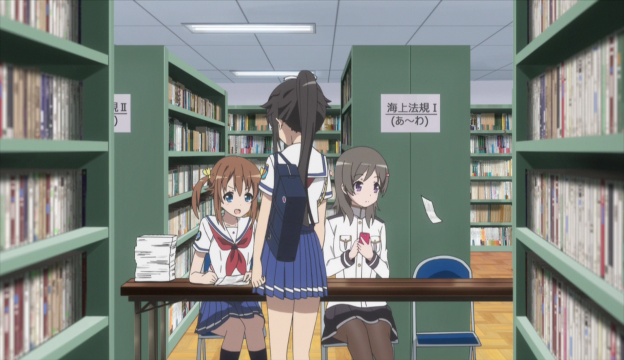 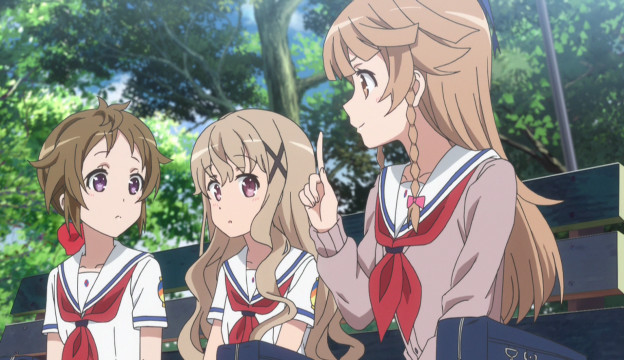 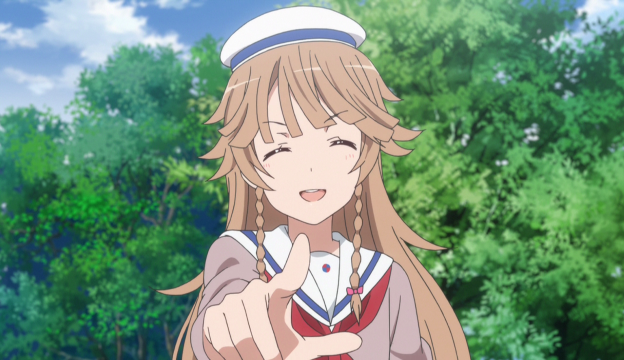 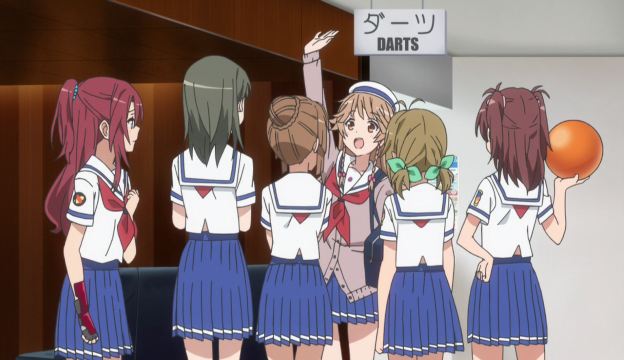 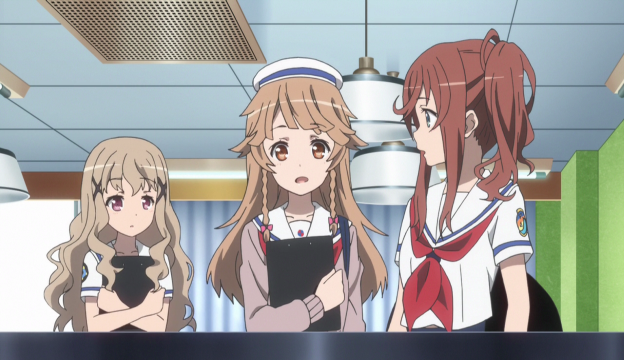 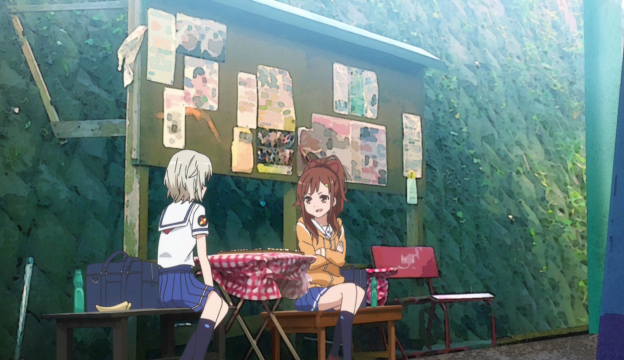 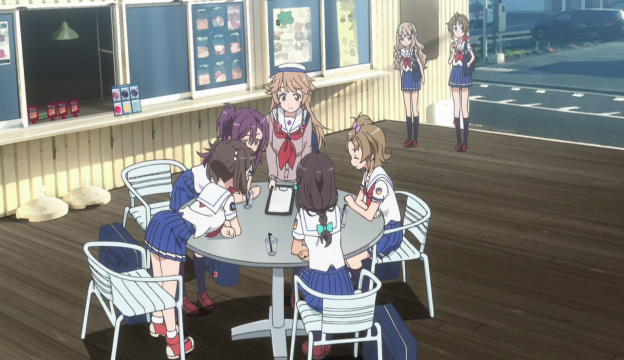 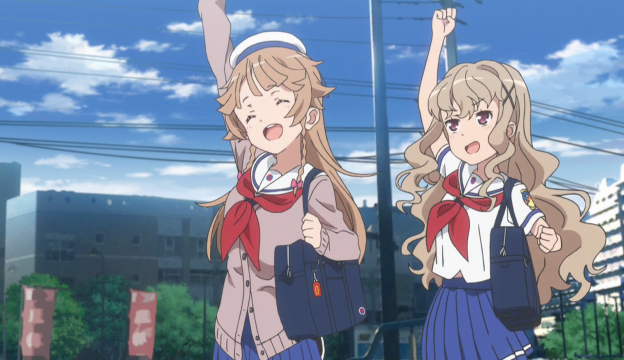 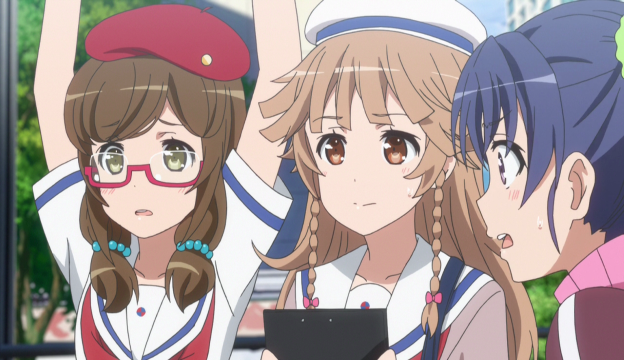 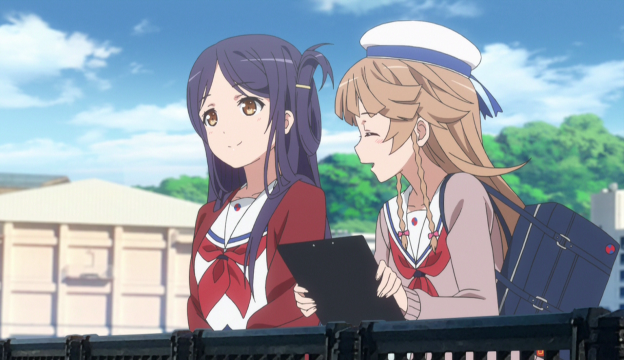 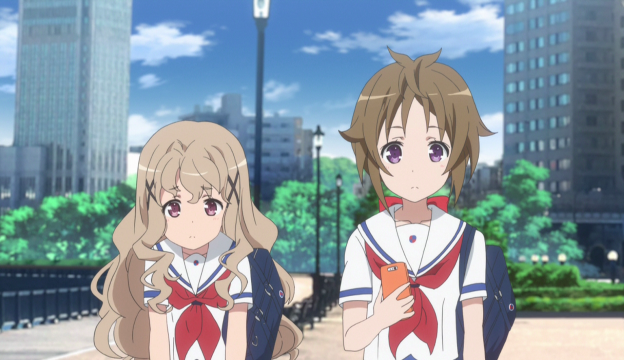 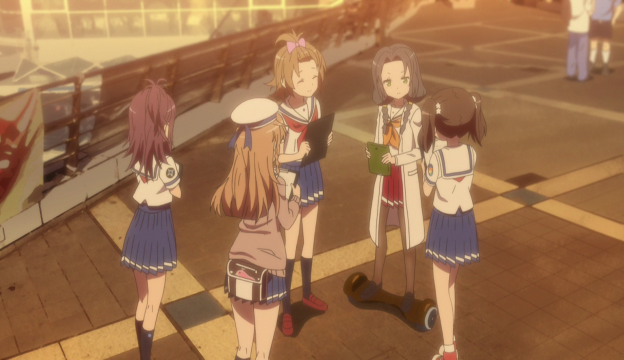 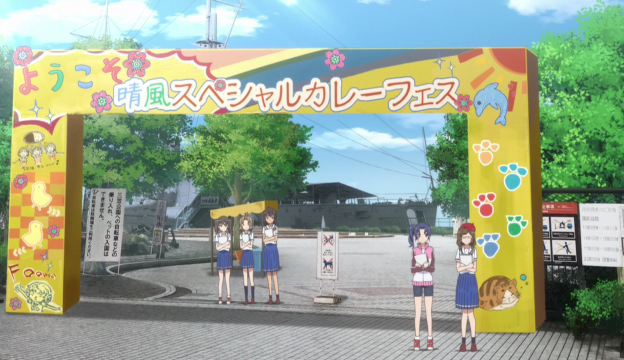 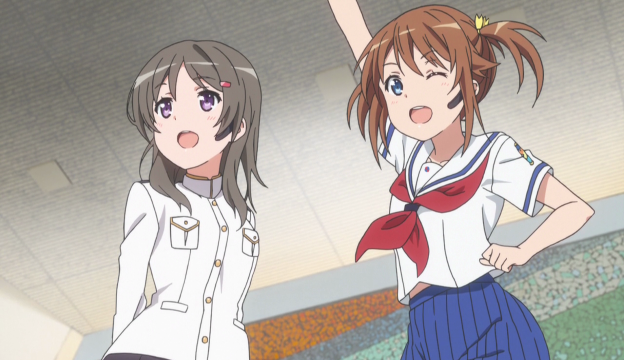 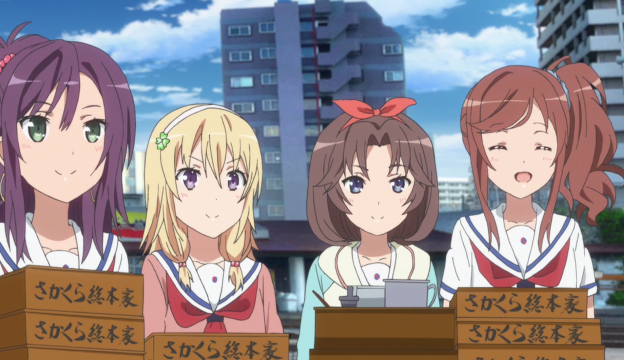 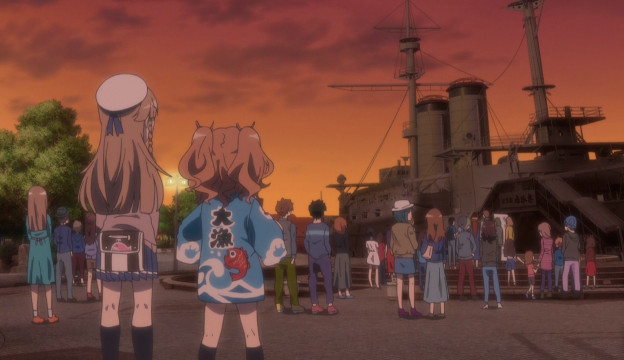 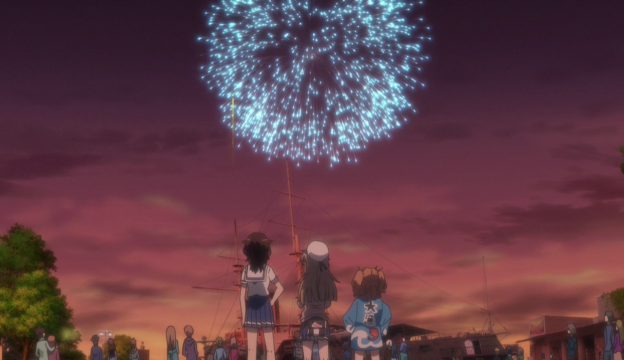 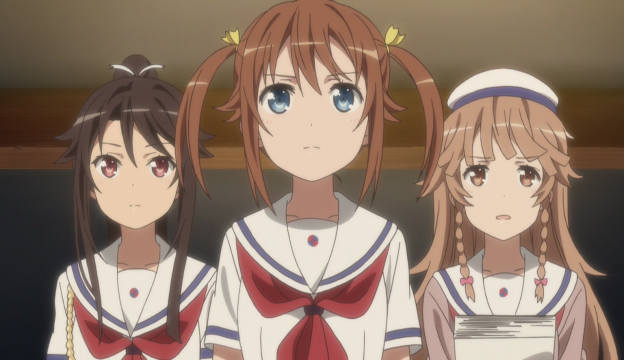 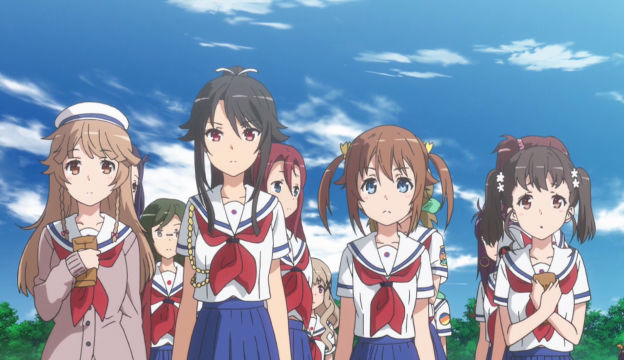 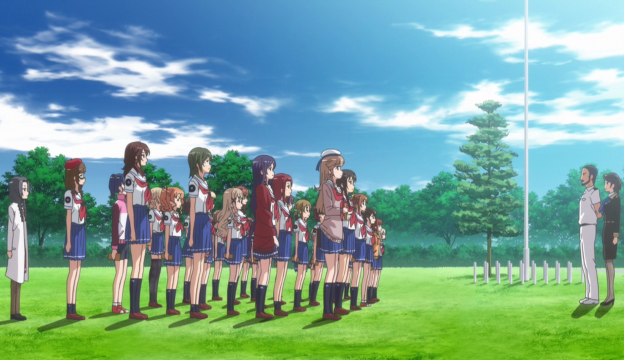 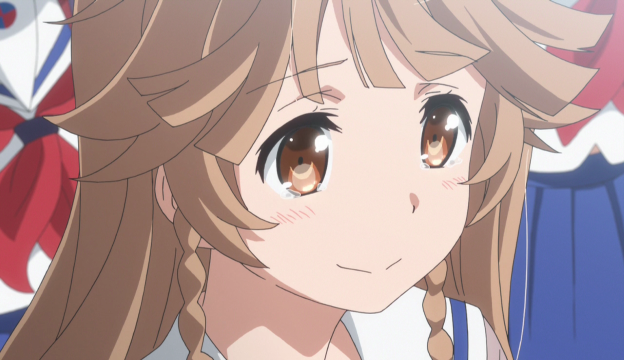 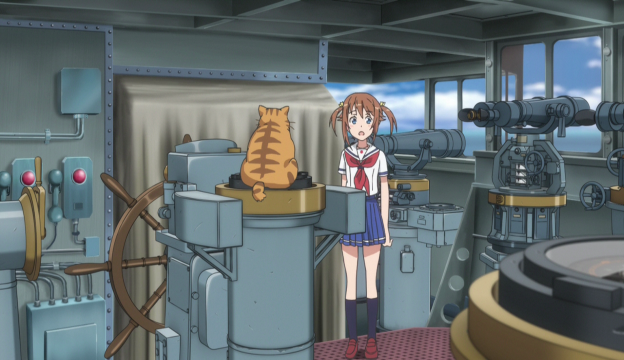 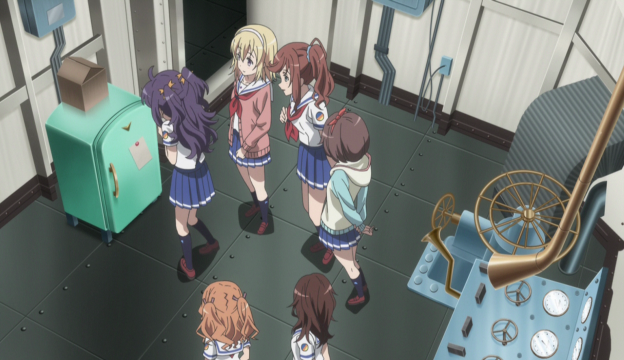 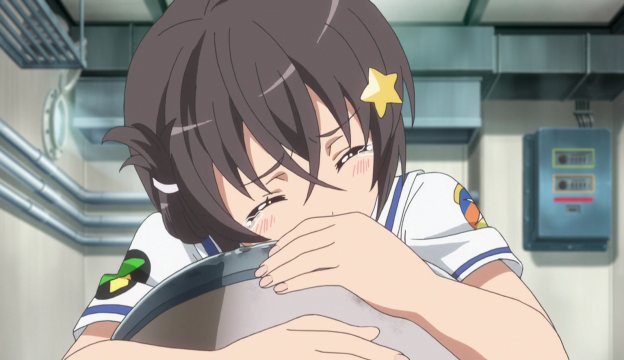 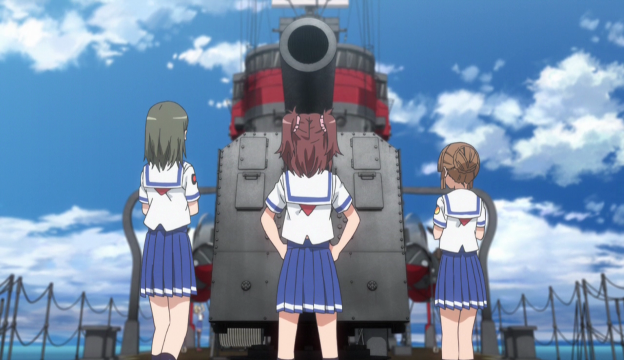 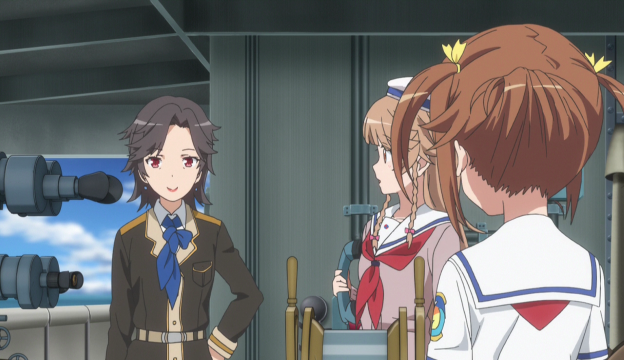 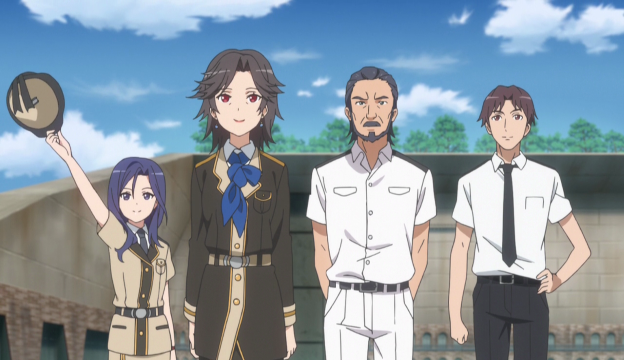 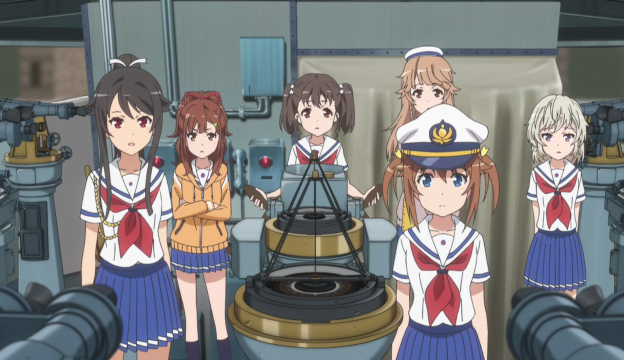 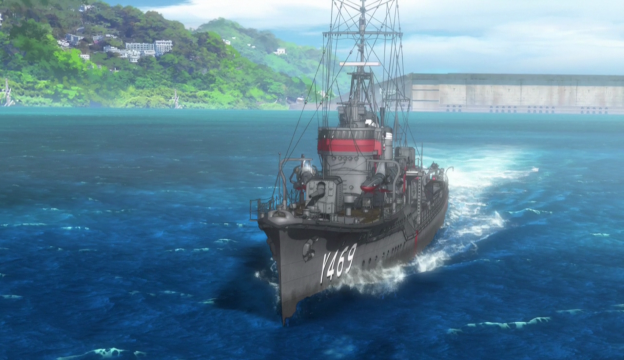 The second of two OVAs is now in the books, and was an enjoyable addition to Hai-Furi. I have remarked that the outcomes are predictable; there was never any doubt that Kouko and her classmates would be separated, especially with their previous role in saving the Musashi in mind. However, I place less emphasis on the outcome and more on the journey taken, so seeing the events of this second Hai-Furi OVA unfold and progress was most entertaining. More so than the first OVA, this OVA portrays the commitment and unity shared universally amongst the Harekaze’s crew. To see them take the initiative and, within legal bounds, do what they can to save their vessel was admirable. To see the entire crew unify and undergo a dramatic improvement in morale when Akeno appears was moving — this is the mark of a good leader, to be able to single-handedly lift spirits simply by making an appearance. Viewers are given an opportunity to see Akeno sing when she performs a song for her classmates and the festival’s attendees with Moeka. With all of these elements in mind, one must wonder about what a continuation could entail; a Tweet from the official Hai-Furi Twitter account strongly hints at a future project, stating that “Planning and policies for various projects are under way. Please look forward to it”. While we’ve heard little since then, having Hai-Furi go through a more involved narrative, possibly featuring a plot to destroy the Blue Mermaids, and the Harekaze’s involvement in thwarting this scheme, could definitely be something that I would be interested to watch.