2 Comments Posted by infinitezenith on July 4, 2017

“Acting is the greatest answer to my loneliness that I have found.” —Claire Danes

Crippled with anxiety whenever speaking with folks she’s unfamiliar with, fifteen-year-old Hinako Sakuragi moves to Tokyo and resolves to join a theatre club with the aim of overcoming her shyness. When her high school’s theature club is found to be inactive, she forms a theatre troupe with the other tenants of the Hitotose Bookstore and gradually develops more confidence as she learns more about the theatres. After the school’s theatre club is reinstated, Kuina, Mayuki and Chiaki do their best to help Hinako, who earns the ire of Yua. Despite her doubts, Hinako’s resolute effort in improving catches the eye of advisor Ruriko, who makes her the lead in the school’s play. Hinako’s determination in improving earns her Yua’s respect and friendship, and the play is a success. Later, the Hitotose troupe put in separate plays for Hinako’s mother and for Christmas, before visiting the Suzuran venue to watch a play there. Simultaneously unremarkable and heartwarming, Hinako Note is the latest anime I’ve seen that serves little purpose beyond warming the heart with its character dynamics: at its core is a girl who freezes out of anxiety when faced with social interaction, on a journey to rectify this. While lacking the same magic and coherent themes as GochiUsa and Urara Meirocho, which featured exceptionally detailed worlds awaiting exploration, Hinako Note nonetheless holds a certain charm for its brand of comedy: the unusual situations characters find themselves are amusing and adorable.

The events and presentation of Hinako Note correspond with a subset of the slice-of-life genre – anime and manga of this sub-genre share several commonalities. Anime of this category feature an all-female cast with a very limited number or total absence of male characters, and are completely devoid of any semblance of a narrative. In its place is a loving, detailed depiction of all of the most ordinary and mundane aspects of everyday life. Such anime are designed with a very specific purpose in mind: it is pure escapism for viewers whose realities are stressful, offering a respite from a difficult day, and some interpretations go further, stating that an all-female cast is appealing for viewers whose fortunes in courtship are sub-optimal. Such anime are informally known as Kirara-kei (Kirara-style) after Manga Time Kirara, a manga publisher, and while usually referring to the style of manga published in this magazine, the term can be generalised outwards: Hinako Note is published by Kadokawa but features all of the elements described in the Kirara-kei genre. It’s the first one I’ve seen outside of a Kirara adaptation, and despite not being quite as compelling as the best works from Manga Time Kirara, it’s certainly not the worst, either (I never did manage to finish Sansha Sanyou, Anne Happy and Stella no Mahou, for instance). Kirara-kei anime and manga are definitely not everyone’s cup of tea, especially for individuals who long for tasteful, thought-provoking entertainment, but it is well-suited for acting as a means of stress relief and escapism. 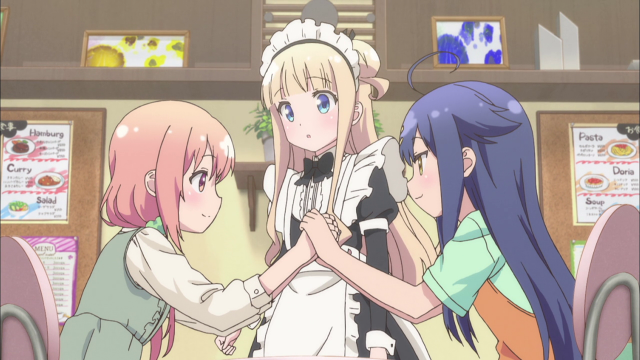 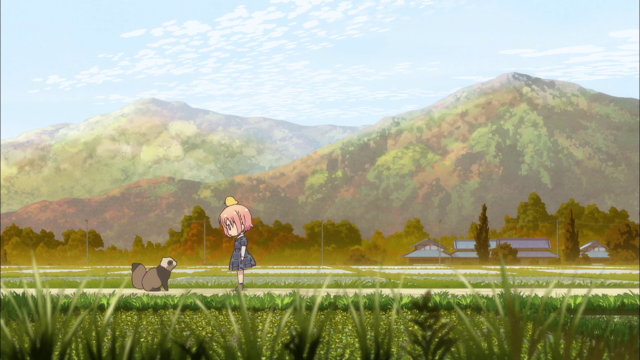 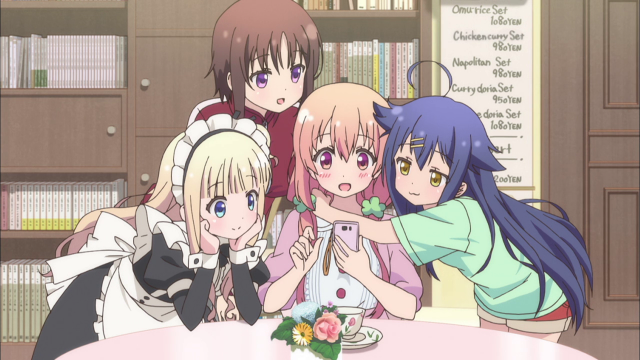 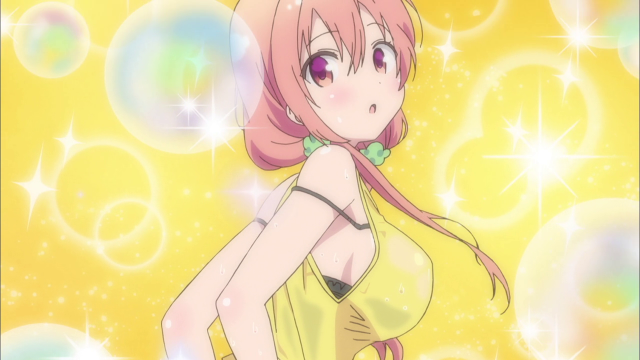 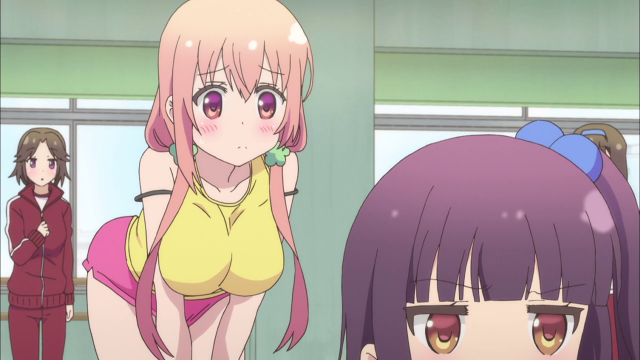 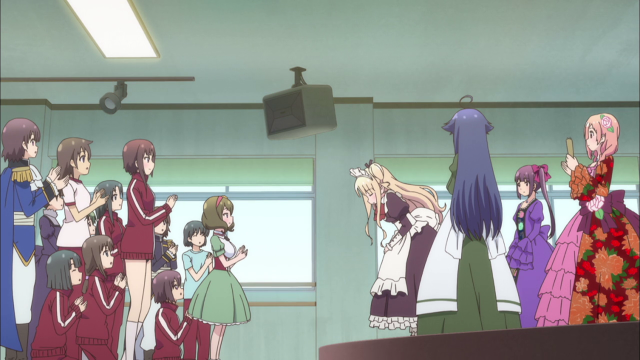 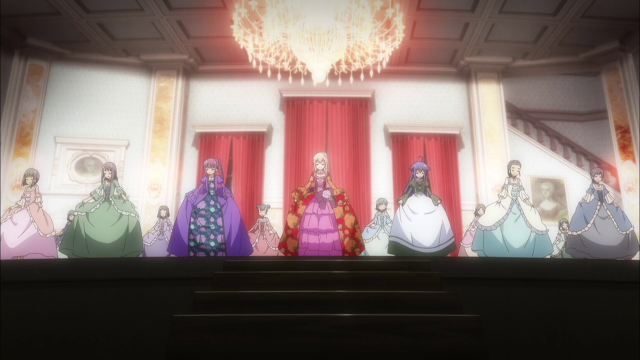 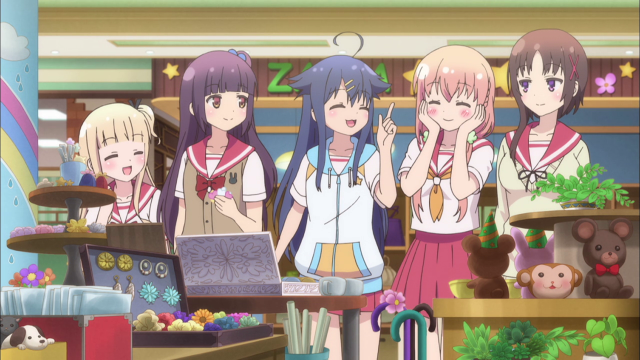 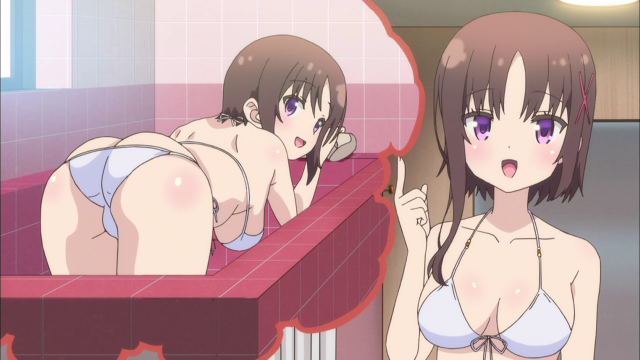 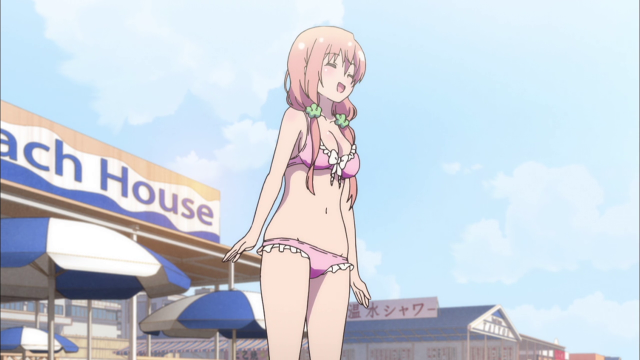 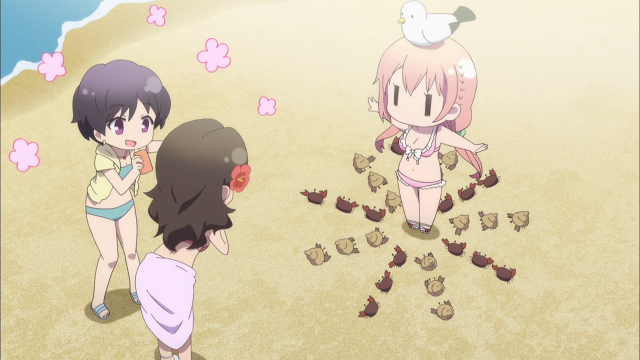 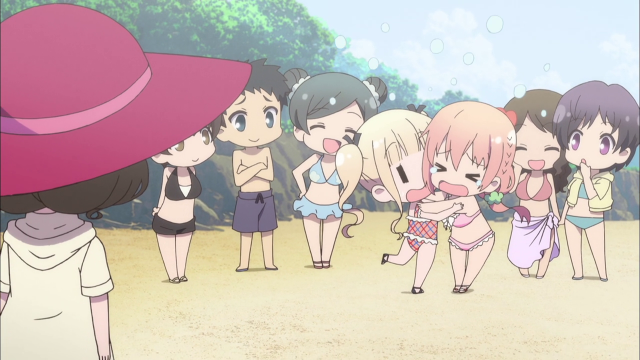 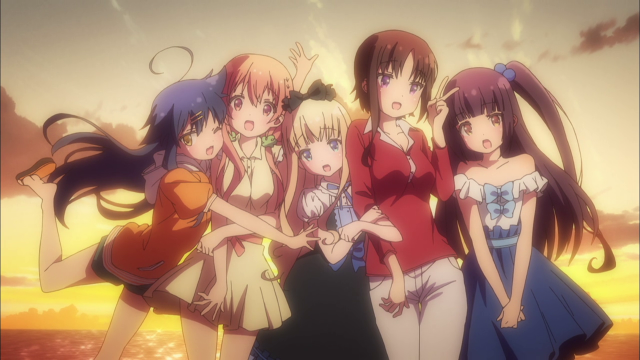 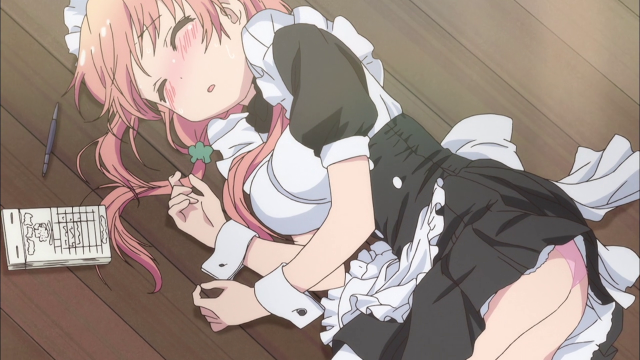 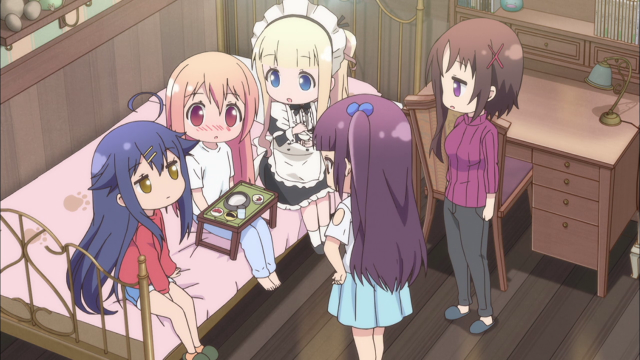 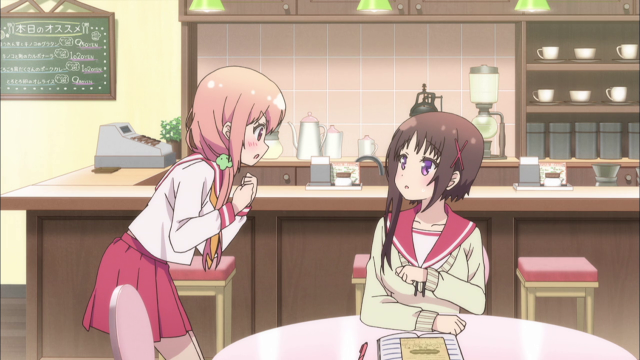 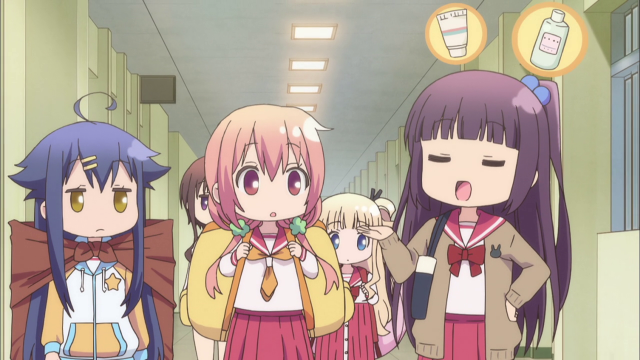 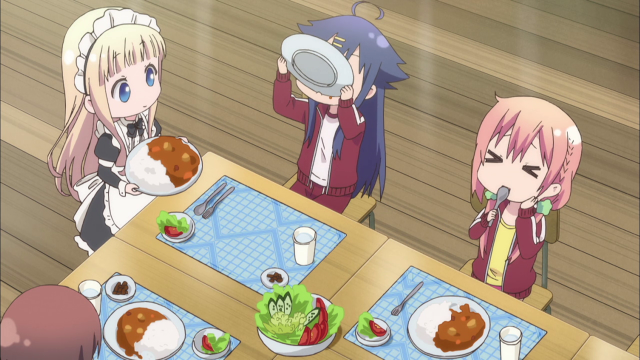 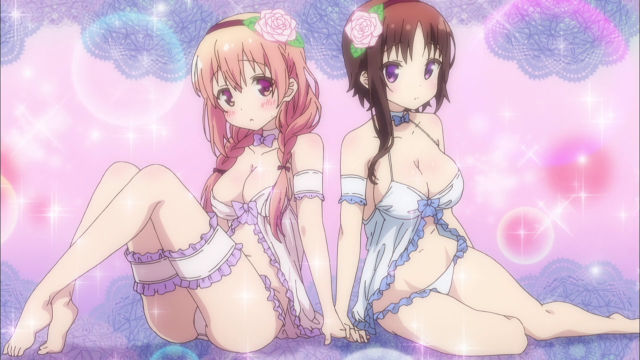 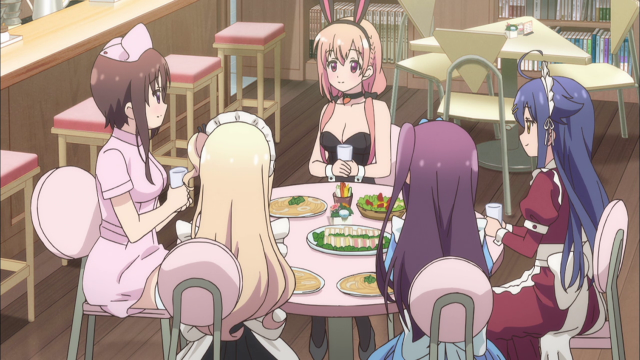 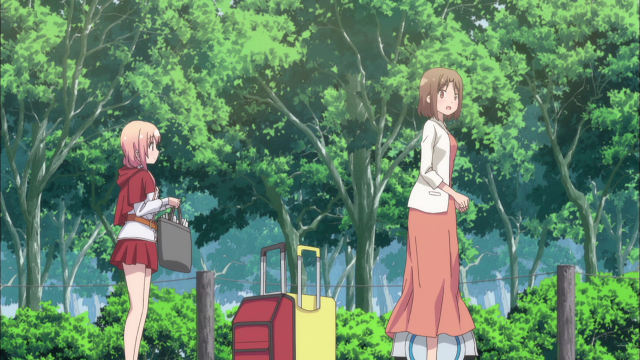 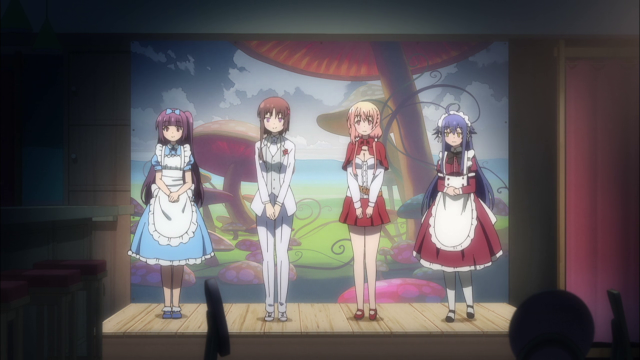 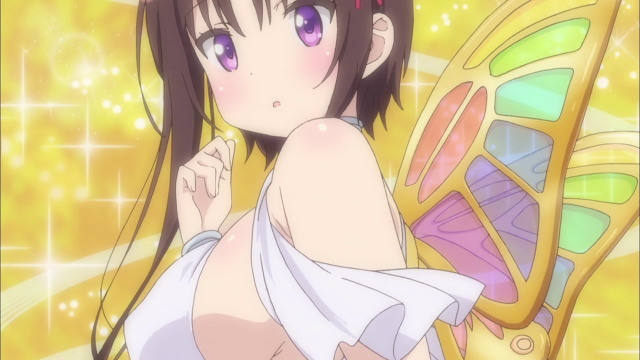 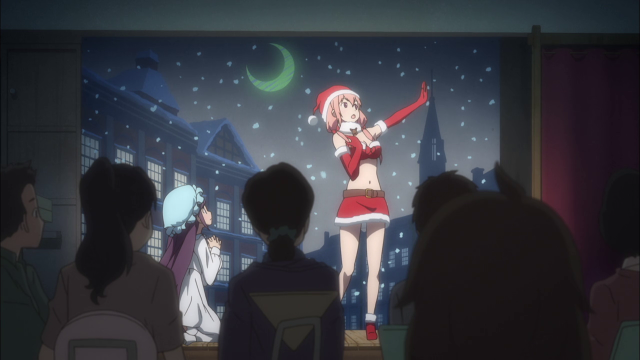 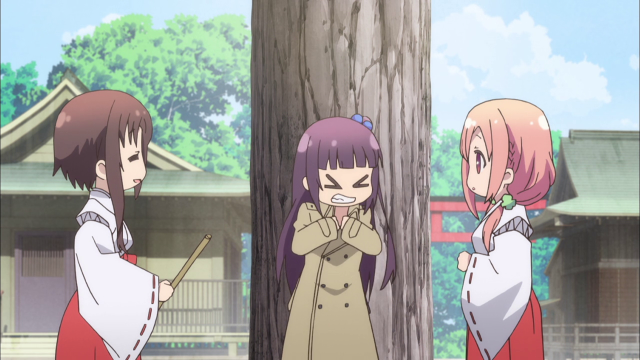 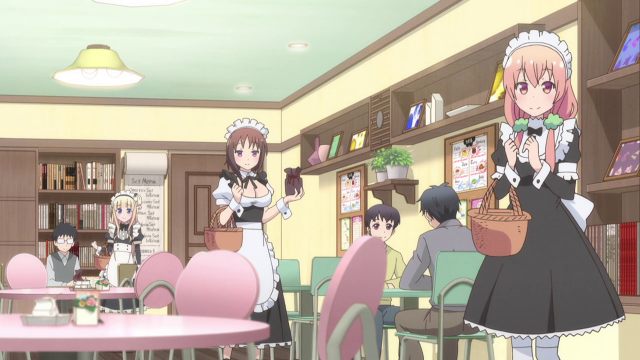 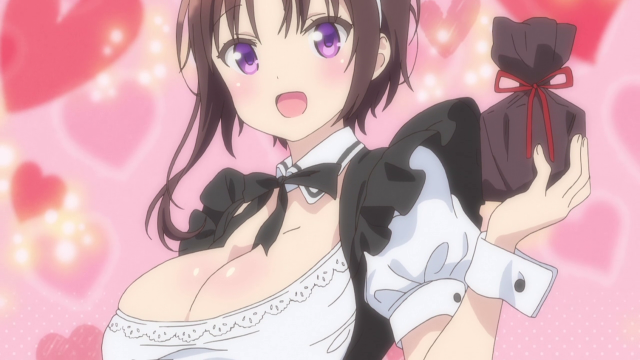 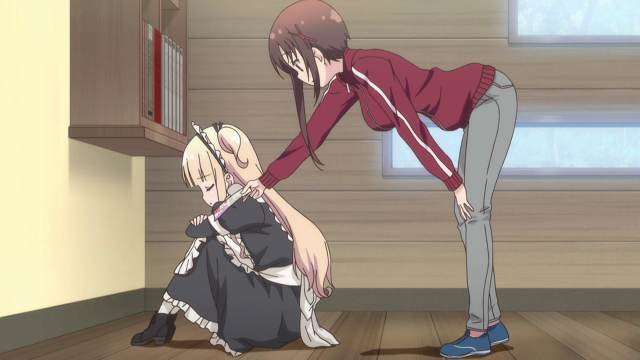 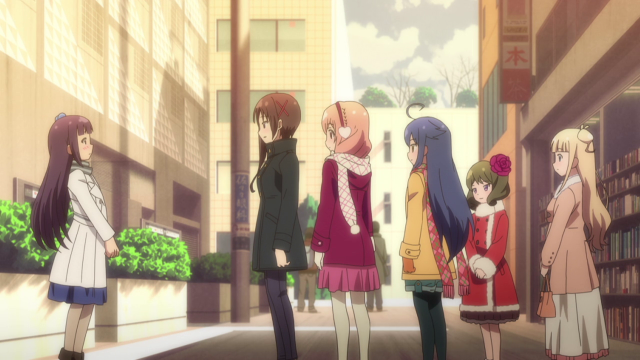 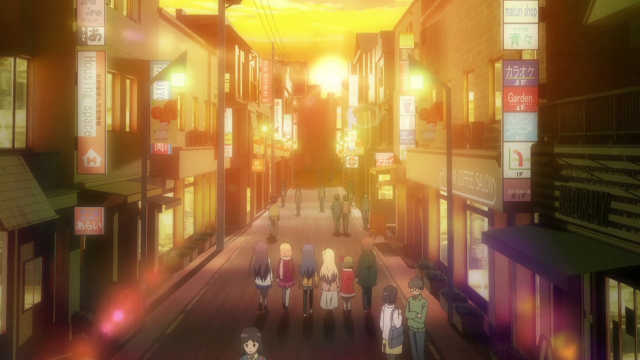 Unlike the works of Manga Time Kirara, which emphasise adorable elements over everything else, the one aspect of Hinako Note that sets it apart is the liberal and brazen presence of anatomy. Such elements would be seen as blasphemous in something like GochiUsa, but here in Hinako Note, they seem to offset the more endearing moments in the anime. The unusual contrast between the heartwarming and less-than-modest moments is conveyed through the artwork: characters are rendered normally whenever anatomy comes to the forefront, but when the situation is intended to draw out fuzziness in audiences, chibi designs are used instead. These pieces come together to form an anime that is quite unusual, similar to the concept of a bacon cheesecake, in which the sweet and savoury elements are thrown into sharp contrast with one another. Neither fully sweet like a cheesecake (e.g. GochiUsa) or savoury as with a bacon cheese burger (e.g. Strike Witches), the end result will not likely resonate with everyone, although there are invariably people who might be either comfortable with the results, or are open-minded to see what things are about. My end verdict on Hinako Note is that I enjoyed watching it, similar to how I do not shy away from unconventional desserts, but I would not likely recommend it to other viewers unless they share a similar perspective on life as I do.