Sakura Quest: Impressions and Review at the ¾ Mark

5 Comments Posted by infinitezenith on August 5, 2017

“They will break upon Warayiba like water on rock. Manoyama’s leaders will cut infrastructure and bureaucratise processes, we’ve seen it before. Bus routes can be reestablished. Traditions archived. Within these walls, we will outlast them.” –Théoden King, Lord of the Rings: The Two Towers

In the aftermath of the Founding Festival, Yoshino learns that their efforts have yielded very little by ways of generating interest in Manoyama, and despairing, she returns home for a vacation, meeting up with her family and friends. While attending the local festival, she realises that home is a place to return to, and revitalised, she returns to Manoyama with renewed spirit. Meanwhile, Sanae and Ririko have been working on a programme to bolster tourism numbers by turning unused residences into Bed and Breakfasts, enticing Spanish cryptid hunters to visit. Manoyama also begins draining Sakura pond to manage bass populations, attracting visitors. Ushimatsu grows troubled by the event and very nearly drowns after jumping in upon spotting something. He is hospitalised, and it turns out that five decades earlier, he, Chitose and Doku were friends in a band planning to go to Tokyo for post-secondary, but on the day of Manoyama’s Mizuchi festival, his actions led to the event being cancelled and eventually forgotten. Yoshino, recalling the effect of her hometown’s festival, feels that restoring the Mizuchi festival is a step in bringing people back to Manoyama, being a place they can return to. In order to formally do so, she and the tourism board must recover three sacred treasures. Consulting with a local anthropology professor living in Warayiba, Yoshino learns that at least one of the artefacts is in a warehouse. When it is revealed that the bus route will stop servicing the area, Sanae decides to teach the elderly how to use tablets and the internet, with the aim of connecting them and reduce their reliance on the bus routes, while simultaneously crowd-sourcing their efforts to find the treasure. Armed with their new-found knowledge of the internet, the elderly people of Warayiba cede from Manoyama in order to raise awareness of their challenges. Yoshino learns that the professor also took advantage of the situation to help digitise the way of life in Warayiba, preserving it, while Sanae helps develop a website for helping make shuttle bus reservations, helping the locals travel about more easily. Moved by the changes, the professor gives Yoshino the location of one of the treasures before passing away.

By this point in Sakura Quest, the development of the narrative has exceeded all expectations; from Yoshino’s understanding of what makes a place worth returning to, to the efforts that she and the others commit towards solving regional problems while in pursuit of a larger goal, Sakura Quest seamlessly weaves all of the events together in an insightful manner that provides a glimpse into the challenges that Japan faces with its aging rural population. Moreover, while the bigger picture is always in the back of the Yoshino and the others’ minds, they nonetheless demonstrate exemplary commitment in putting an effort into making a positive difference for people living in both Manoyama and Warayiba. This attention to detail without losing sight of the grand scheme is mirrored in Sakura Quest, which strikes a fine balance in illustrating subtleties and illuminating the story’s eventual goal. From the unique adaptations Warayiba’s folks have taken to survive in the mountains, to the consequences of anonymity on the internet, Sakura Quest portrays elements with an exceptional degree of realism to the extent that the anime is more than immersive – it is instructive, reminding audiences that people everywhere have developed very unique adaptations in their lifestyles that allow them to survive in a range of climates and geographies. Simply, Sakura Quest is a wonderful example of anthropology in a fictional setting that reminds audiences of how much culture and values stand to be forgotten if an honest effort is not made to respect these traditions and long-standing ideas, especially in a country such as Japan, where the countryside continues to depopulate as youth move into the cities in search of new opportunity. 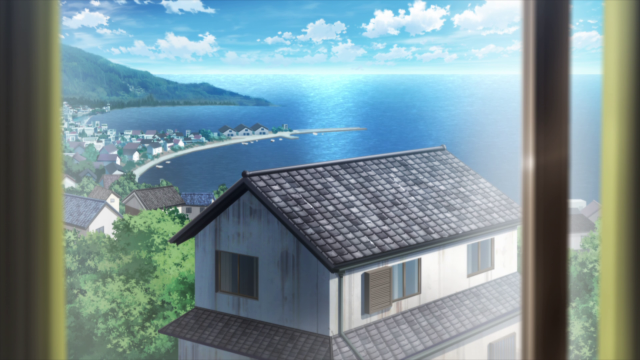 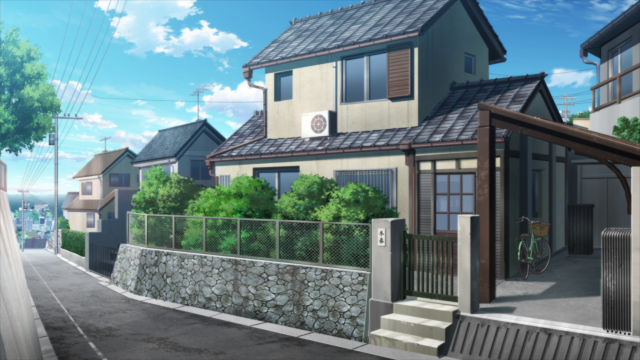 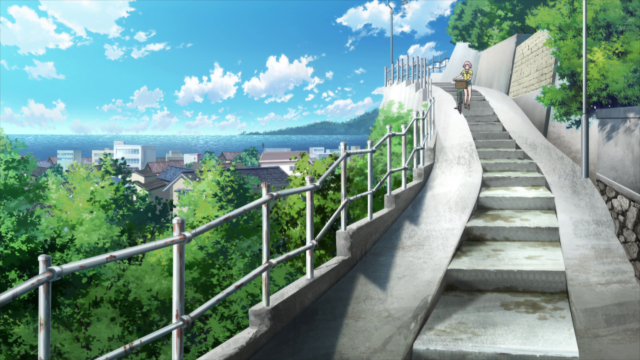 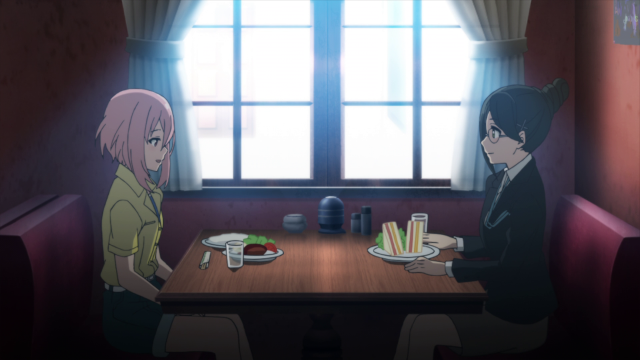 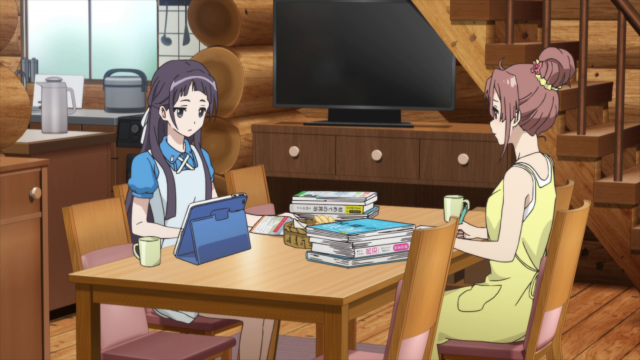 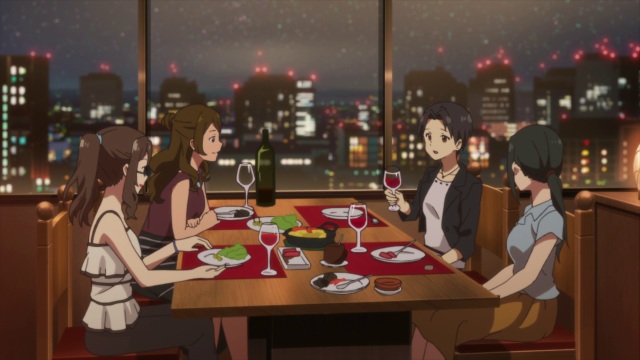 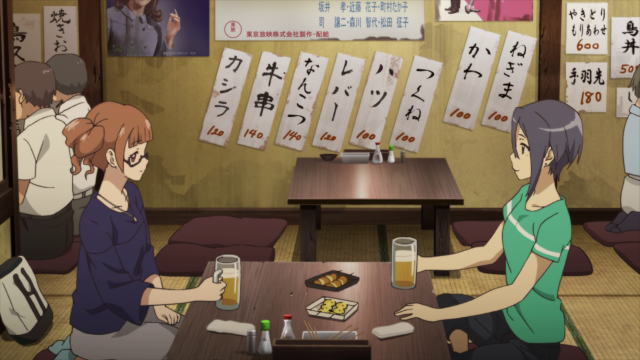 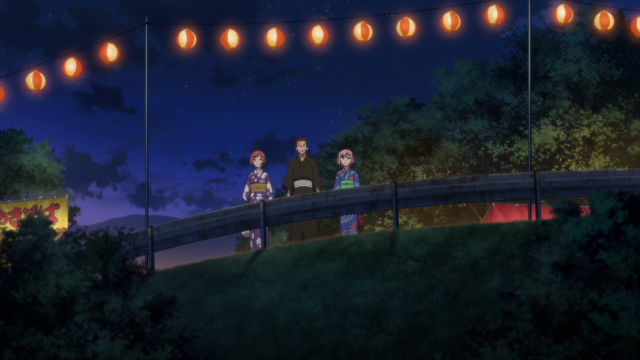 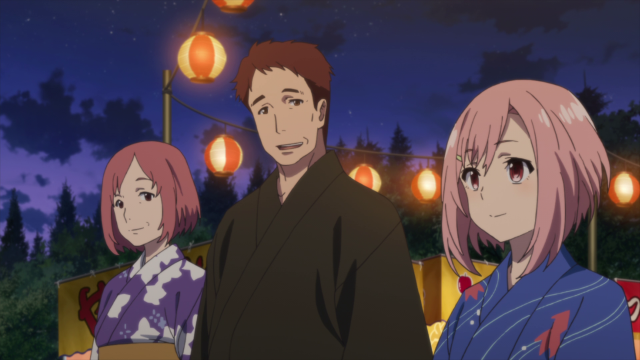 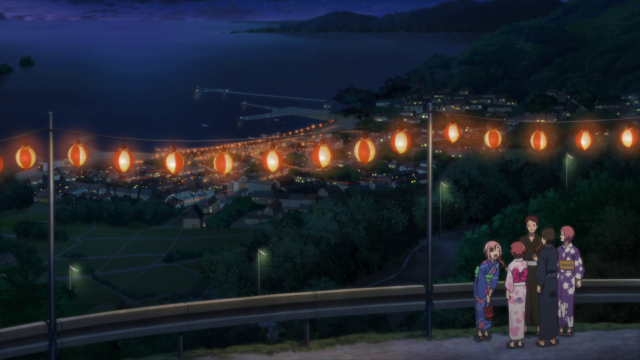 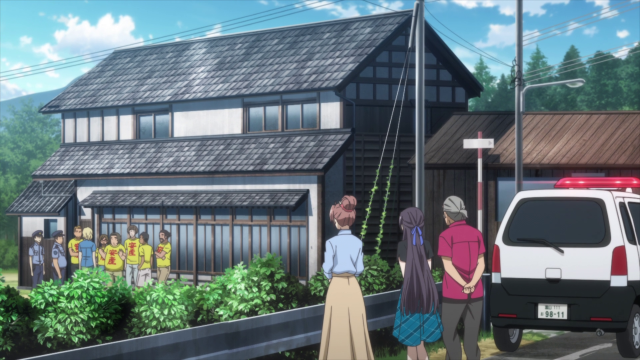 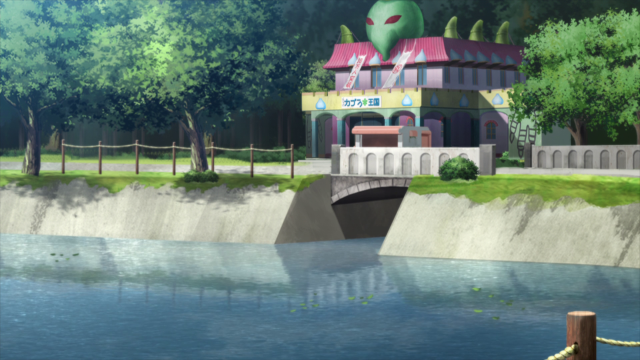 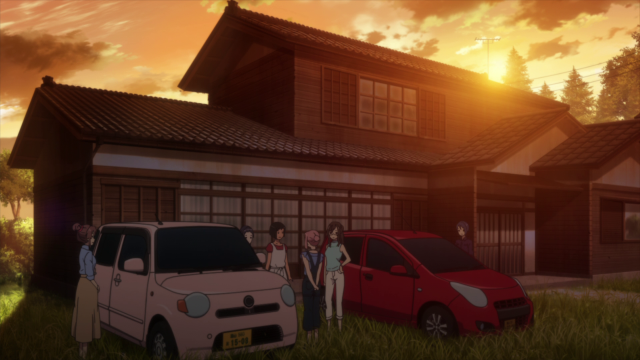 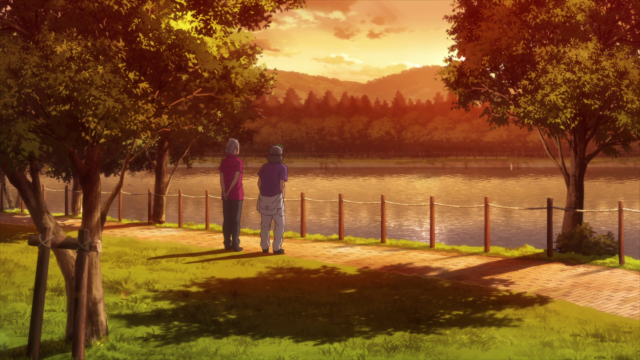 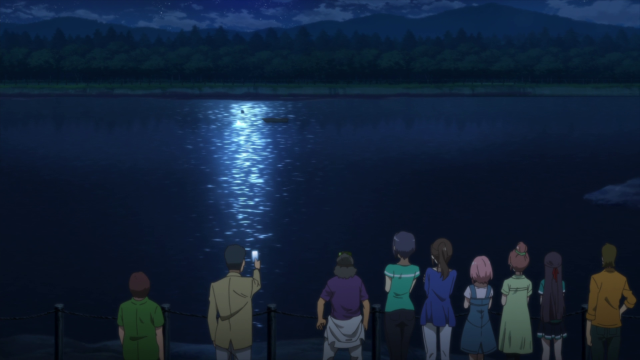 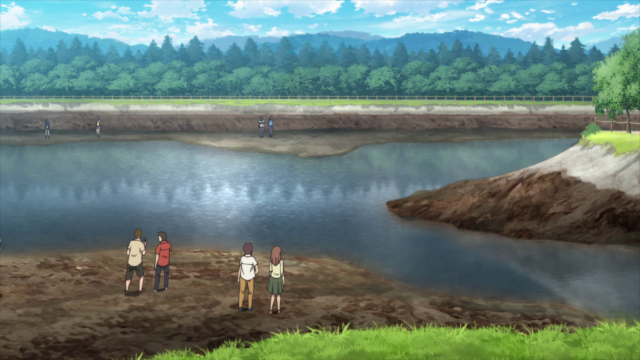 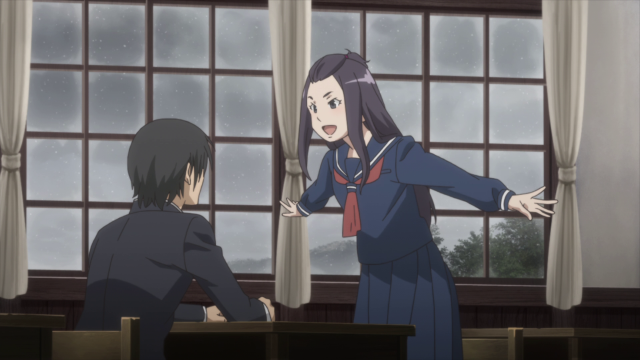 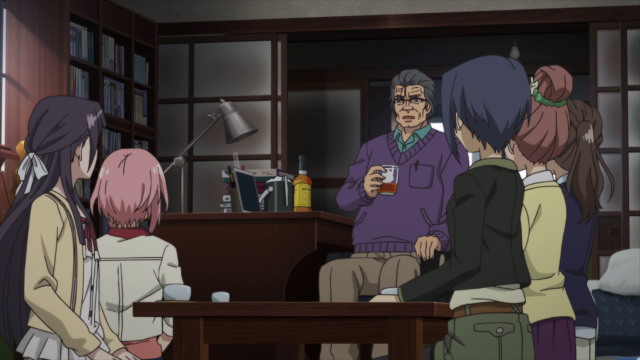 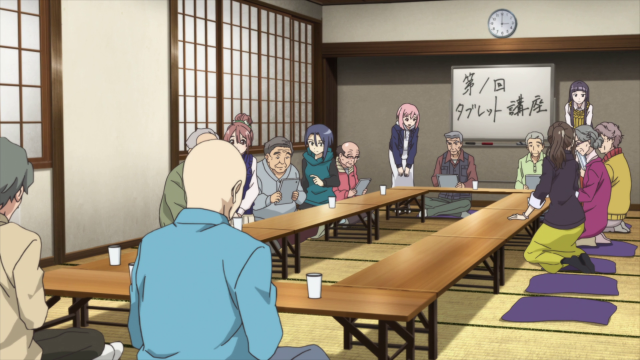 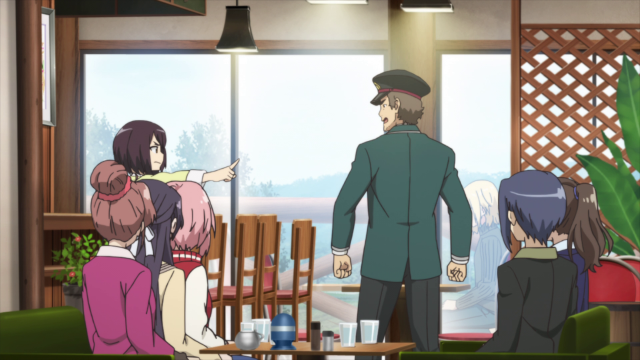 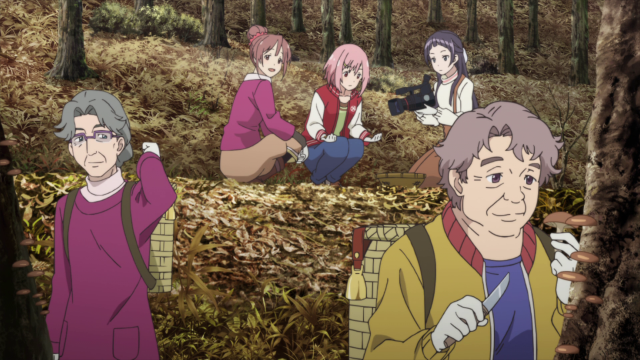 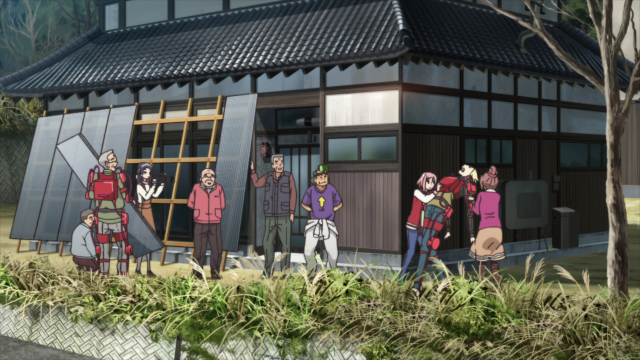 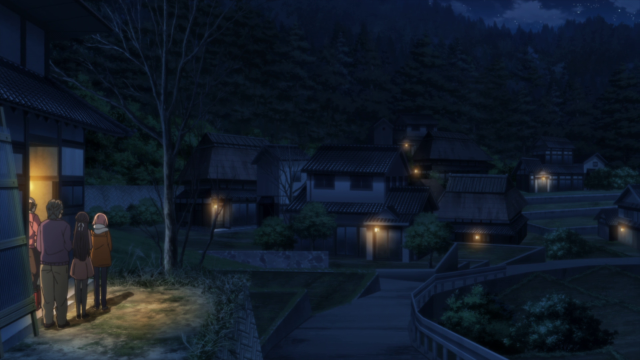 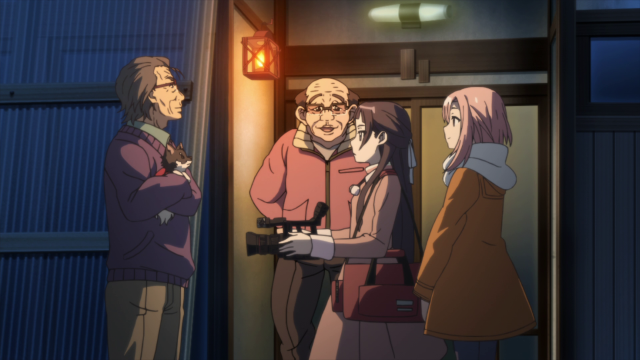 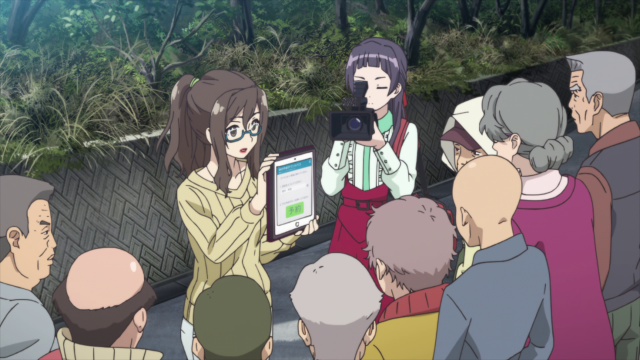 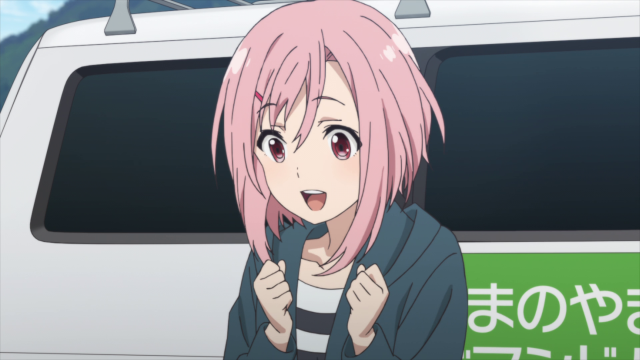 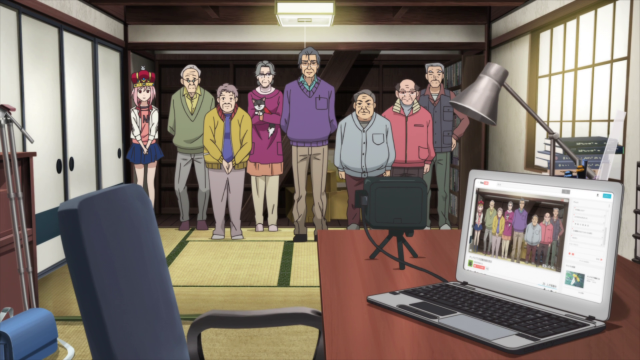 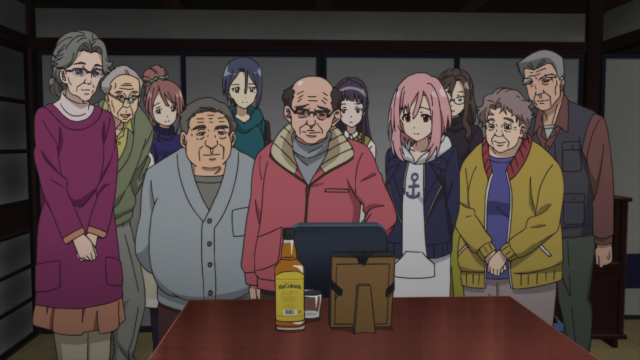 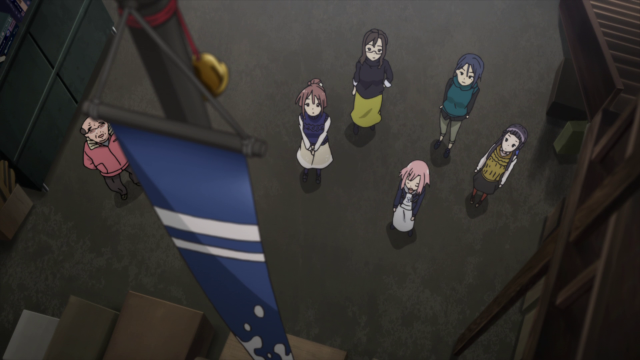 As a consequence of the directions Sakura Quest has taken as of late, Sakura Quest has proven to be something that continues to exceed expectations each passing episodes. While seemingly about Yoshino’s experiences in Manoyama, Sakura Quest has developed into something far greater than any one individual. Eighteen episodes into Sakura Quest, it becomes clear that Yoshino and the others are banking on restoration of the Mizuchi Festival to help Manoyama stand out on the map. The journey towards accomplishing this goal will certainly take Yoshino and the Tourism Board on further adventures (and misadventures) in the manner that P.A. Works has become so adept at wielding: the masterful combination of the comedic and dramatic come together to really bring Manoyama and its residents to life. I find myself asking how Sakura Quest manages to impress, and I answer myself that the sum of its elements in conjunction create a highly complex world, bringing together the detail-oriented facets of Shirobako and the premise of revitalising a small town premise from Futsuu no Joshikousei ga [Locodol] Yattemita. Not quite as ordinary as Shirobako or light-hearted as Locodol, Sakura Quest incorporates the strongest elements of both to yield an anime that’s offered no shortage of entertainment and material for discussion. With all of these aspects in mind, I am greatly interested in seeing what journey awaits Yoshino and the Tourism Board as they strive to bring back the Mizuchi Festival and make a tangible difference for a small town.

5 responses to “Sakura Quest: Impressions and Review at the ¾ Mark”