Sakura Quest: Review and Reflection at the Penultimate Episode

“Whether it’s from the biggest, most powerful city, or from the dinkiest little podunk town, there is a certain attachment and connection, and yes, pride about where you came from.” –Cheech Marin

Yoshino and the other ministers manage to locate the Hanging Drum hidden away in the derelict school, while Maki decides to try her hand at an audition. After learning she was unsuccessful, she returns to Manoyama, where Yoshino has planned out a formal closing ceremony for the school. Maki coordinates the play, which is well-received, and it is announced that the school is to be repurposed as a multi-use installation. Later, Erika runs away from home, fearing her destiny is a slow death in Manoyama. Maki and the others look after her, although the situation deteriorates when her younger brother runs off in search of the Golden Dragon after overhearing its power to grant wishes. He is found, and Erika decides to stay in Manoyama for his sake. The Golden Dragon is eventually recovered, but it turns out to be a toy. When the Belem Bakery proposes to open a branch in Manoyama, Yoshino’s team has difficulty finding a spot, later learning that one of the citizens had been burned in the past and is reluctant to assist. This leads to a change of heart amongst one of the Board of Merchant’s members, who agrees to rent his shop to Belem Bakery. Preparations for the Mizuchi festival continue in earnest, and even when Yoshino learns that Manoyama is to be merged with Tomikura, she nonetheless wishes to continue with the festival, feeling that having a distinct culture might be sufficient to raise a compelling argument against the incorporation. A TV company takes interest in the festival and proposes to broadcast it widely on the condition that they are allowed to replace Ririko in the play, but Ushimatsu refuses. Even in light of the ending of her contract, Yoshino continues to do her best, learning that Sandal’s parents met in Manoyama, and later, is given a surprise birthday party. On the day of the festival, Ushimatsu takes off in search of Mayor Naumann, who is visiting the area, with the proposal of twinning Manoyama with his city, which is also Sandal’s birthplace.

From the relentless advance of technology and social norms leaving small towns behind, to the pursuit of dreams and understanding circumstances behind why people make the decisions that they do, Sakura Quest has continued to maintain its exceptionally captivating narrative right up until the penultimate episode. There is a great deal going on in Sakura Quest, and all of this is handled remarkably well; the anime strikes a fine balance between depicting the smaller details and integrating the resulting themes into the overarching narrative, with the effect of giving the characters a sincere, authentic sense. In particular, Yoshino’s term ending has forced her to consider what she might be doing once the term ends, and her remarks, in saying that she now desires a career that is fulfilling, show just how far she’s come since the mistake that took her to Manoyama. A year’s worth of experiences has made Yoshino a problem solver, quick to identify the intricacies in a system and devise solutions that are acceptable to involved parties. Creative and mindful of traditions, Yoshino’s time in Manoyama confer upon her with a highly unique skillset, and a newfound perspective on what a career is. Millennials, such as myself value a sense of fulfilment and purpose in their occupations above all else; in accepting a position she was quite unprepared to work in, Yoshino has learned for herself what she desires from a job. She has come to understand that she desires a career where she is constantly being challenged, one defined by the unexpected and where things are never normal. Such a career, Yoshino, reasons, might or might not be in Tokyo, and in making this realisation, Yoshino concludes that she is okay with working in a small town as well as in a metropolis. From an external perspective, Yoshino’s experiences over a year have made her much more mature, introspective and aware of her surroundings. She’s more decisive and confident now compared to her self from Sakura Quest‘s inception. These are vital attributes, and the Yoshino who’s got a year’s worth of experiences in Manoyama is much better equipped to convey her ability to contribute to whatever occupation she seeks in the future. Yoshino’s growth lies at the core of Sakura Quest, and seeing these subtle differences over time is a major contributor to what makes Sakura Quest worth watching. 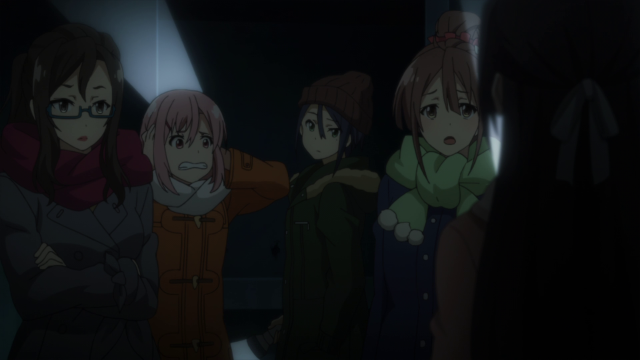 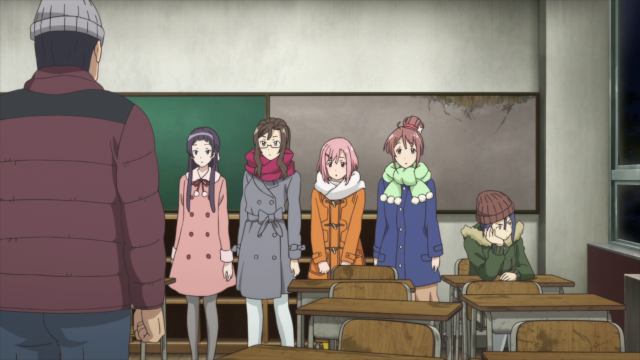 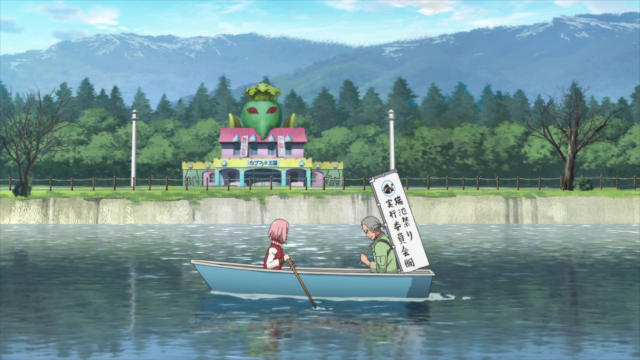 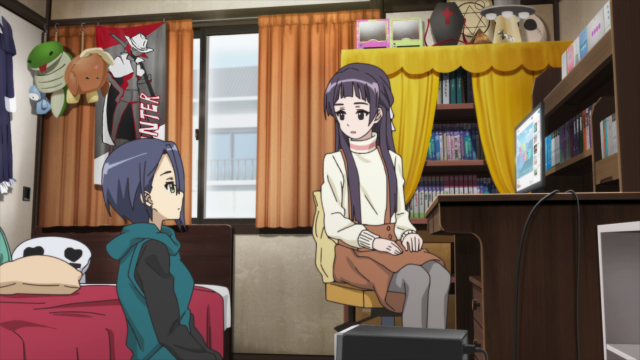 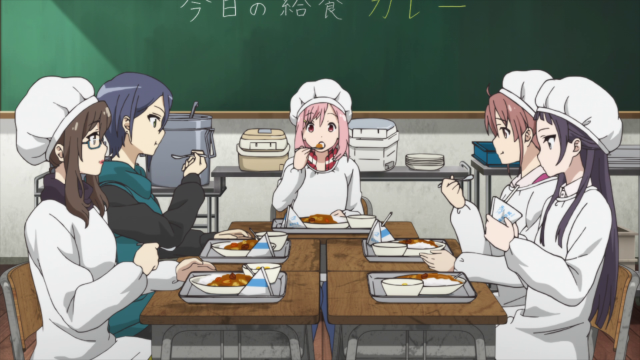 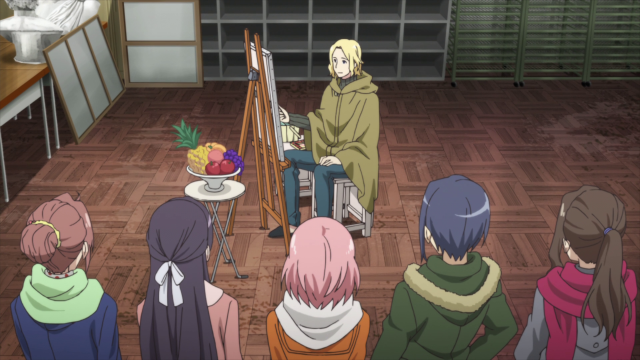 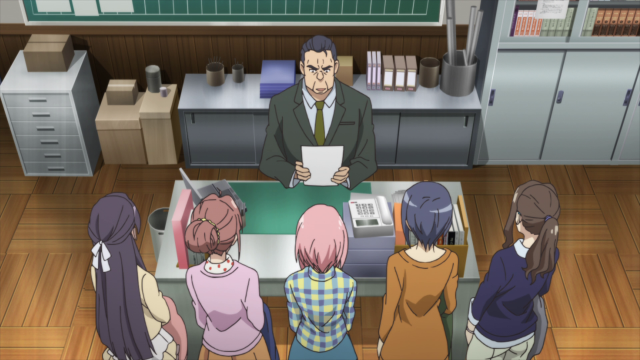 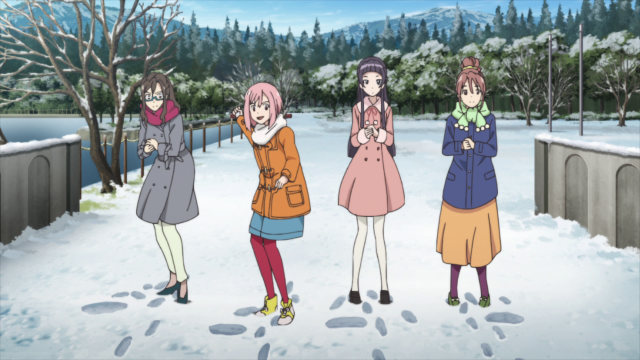 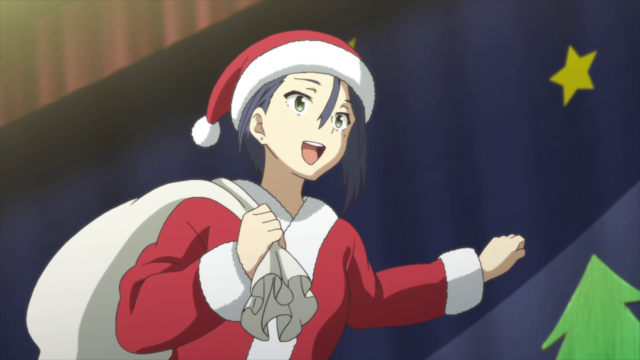 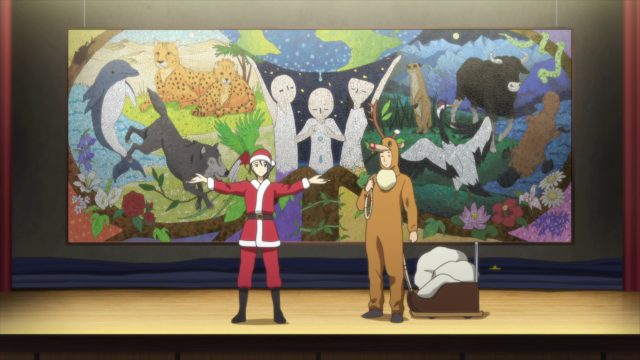 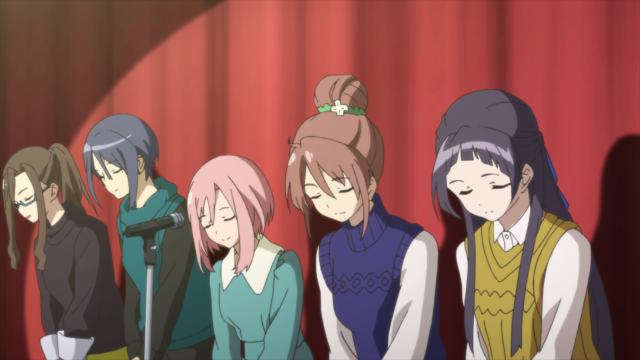 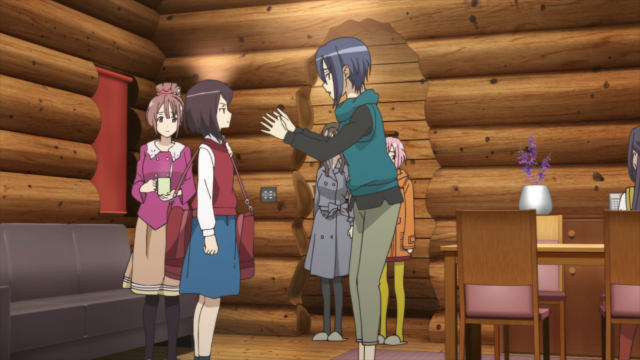 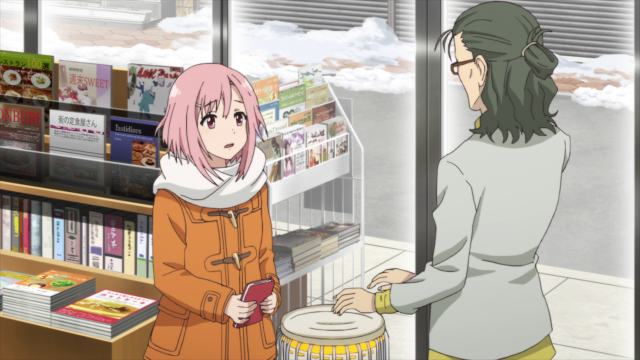 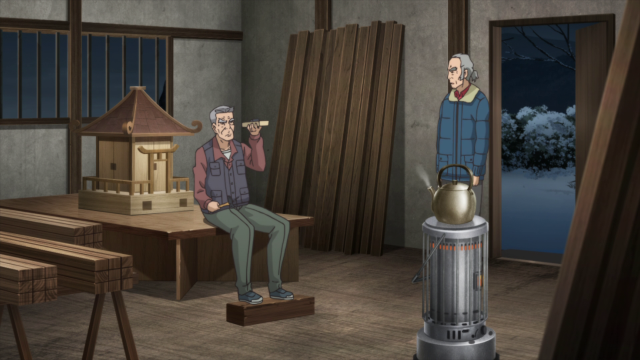 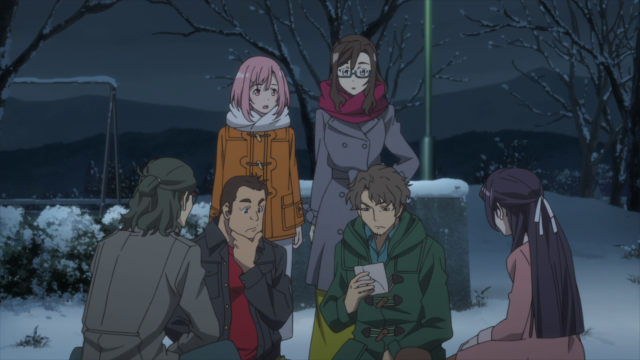 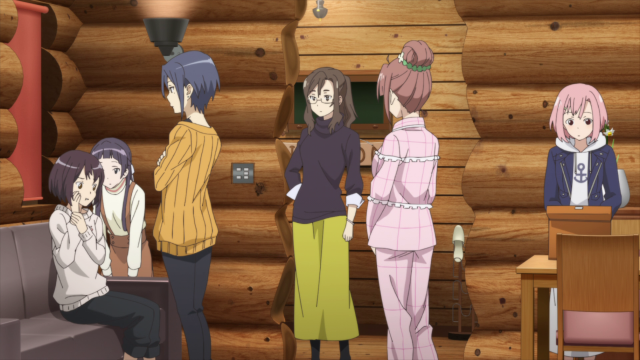 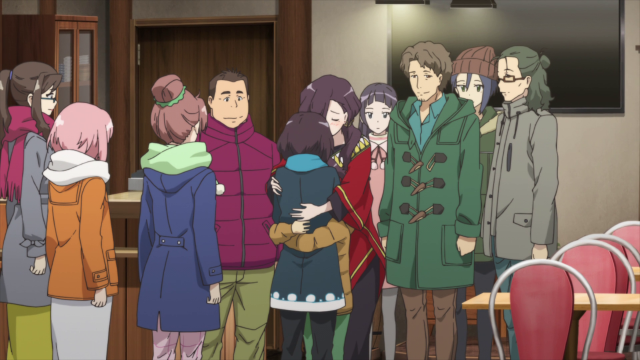 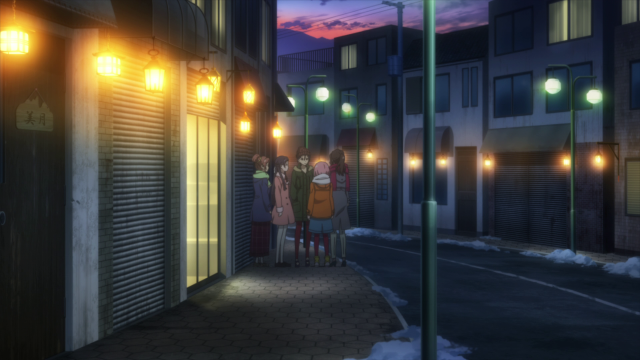 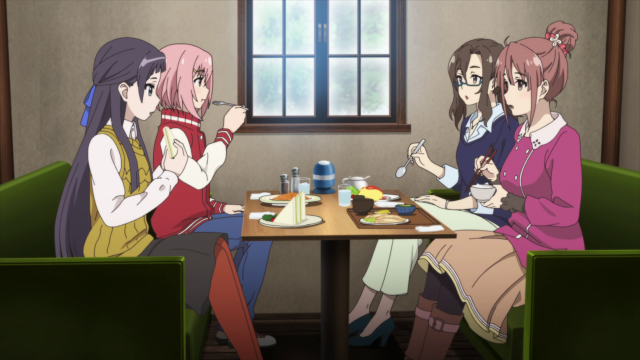 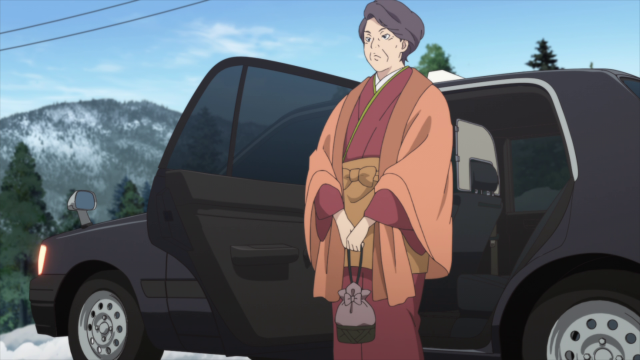 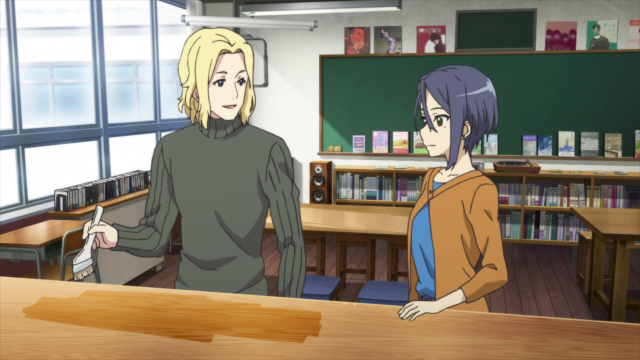 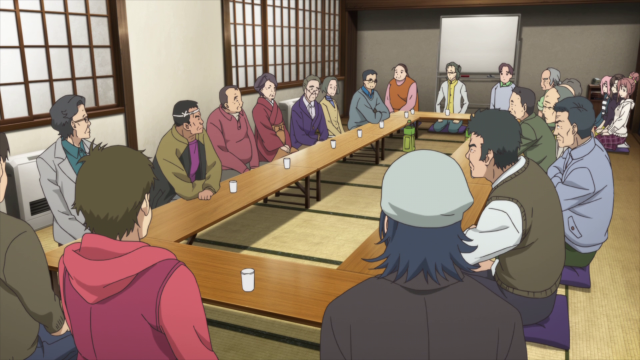 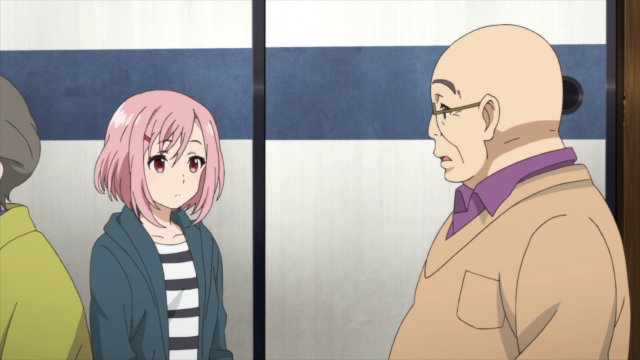 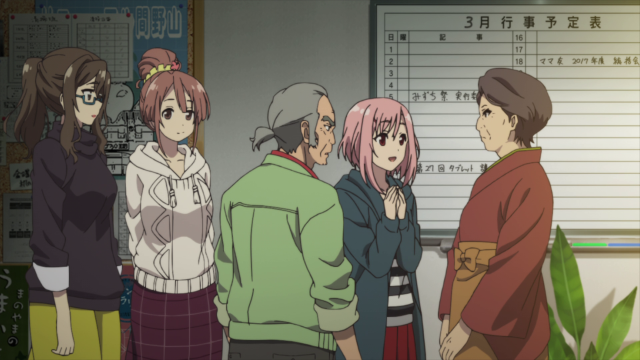 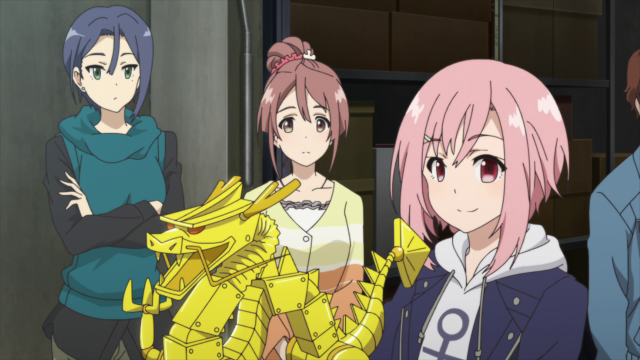 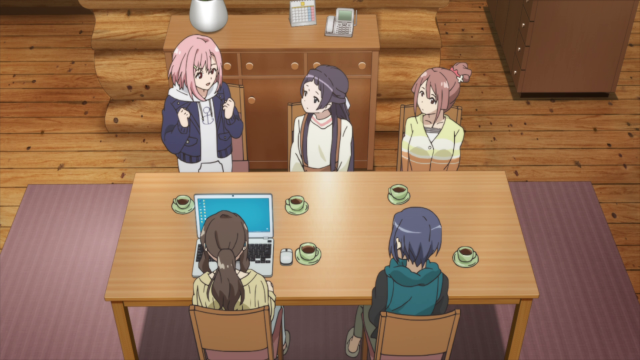 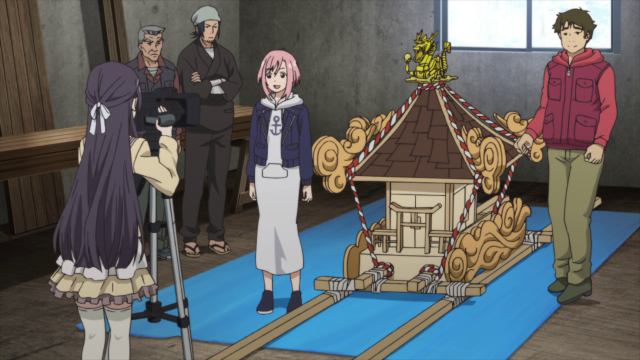 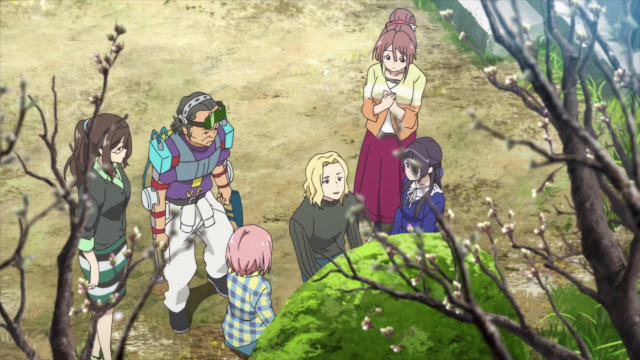 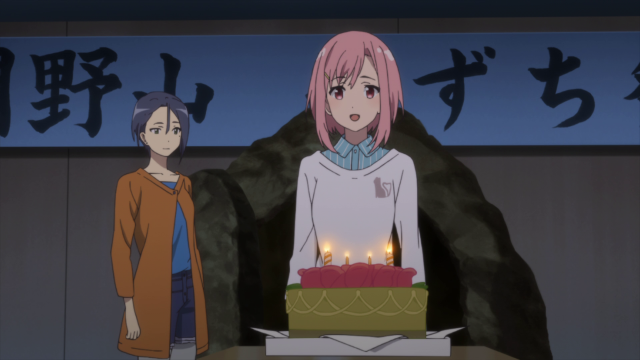 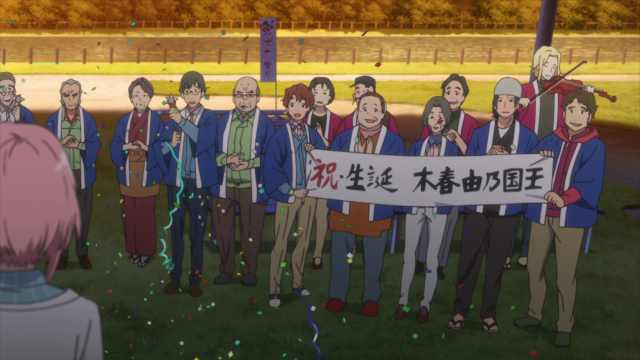 The question that is worthy of speculation, thus, is what path Yoshino will take once the finale is reached and the time comes to make a decision. Yoshino herself states that she might be willing to move back home and make opportunity there, and folks with familiarity in narratives such as these will often predict that Yoshino will stay in Manoyama, having grown attached to the town, its people and attractions. Another reasonably likely outcome is that she does leave, but manages to find a position elsewhere as a result of her accumulated experiences. With due respect, both outcomes are equally likely – regardless of what direction Yoshino chooses, she now has the skill and experience, plus understanding of her own aspirations, to find success in whichever path she follows. While I’ve decided to focus on Yoshino for the post prior to the finale, the closing stages of Sakura Quest deal with a variety of issues, from Maki’s conflicting desires to act, to the Board of Merchants’ struggles to keep the shopping district relevant in an age where modern supermarkets defeat their purpose, or Erika’s refusal to stay somewhere with no prospects (mirroring the real-world phenomenon of youth leaving their homes in the countryside to seek opportunities in urban areas). There is considerable depth in Sakura Quest, and all of these elements come together to create P.A. Works’ strongest presentation since Shirobako: I’ve come to care for each of Yoshino, Shiori, Sanae, Maki and Ririko, plus Manoyama’s citizens, who each have their own stories and goals. In short, they are fantastically written, as human as you and I, and each week since April, it’s been an absolute blast to immerse myself in Yoshino’s world. This is a series that I will miss considerably once it concludes, but for the present, there remains the finale that will be airing come Wednesday; I look forwards to seeing where one chapter of Yoshino’s story concludes and what her future entails.