Star Wars Battlefront II: A Reflection of Starfighter Assault and Space Gameplay in the Open Beta

If I had been active as a blogger back during the early 2000s, Star Wars Rogue Squadron II: Rogue Leader would certainly have been featured as a game I would write about. Featuring ten single player missions and several bonus missions spanning the original triology, Rogue Leader boasted some of the most sophisticated visual and gameplay effects that could be run on the Nintendo GameCube, allowing players to relive the most famous moments in Star Wars. From the first attack on the Death Star to the Battle of Hoth and the Rebel Alliance’s final attack on the Emperor’s Death Star II, the game’s technical sophistication and enjoyment factor led many critics to remark that this game alone was worth buying the GameCube for, and indeed, even fifteen years after its launch, only Pandemic’s Star Wars: Battlefront II in 2005 can even hold a candle to Rouge Leader. However, this year’s reinterpretation of Battlefront II comes the closest to bringing back the sort of magic that was available in Rogue Leader, for in Battlefront II, there is the Starfighter Assault game mode that pits players against one another in beautifully written space battles. In the Battlefront II open beta, players are assigned to the Rebel Alliance or Galactic Empire over the shipyards of Fondor. In a multi-stage battle reminiscent of the Rush and Operations game modes of Battlefield, Imperial pilots must deplete the Rebels of reinforcement tickets and defend a Star Destroyer in dry dock, while the Rebels aim to take down the Star Destroyer. Players get their pick of three different classes of starships: the balanced all-rounder fighter, high-speed dogfighter interceptors and the slower but durable bombers, each of which can be customised with star cards to fit a player’s style.

The epic scale of ship-to-ship combat in Starfighter Assault is quite unlike the infantry-focused Galactic Conquest: the space battles of Battlefront II were developed by Criterion, of Burnout and Need For Speed fame. I jumped into a game and attempted to steer my X-Wing with my mouse, but promptly crashed. After switching over to the keyboard, I began learning my way around the controls, and within minutes, was pursing Imperial TIE fighters and firing on objectives. Unlike Battlefront, where starships had the manoeuvrability of a refrigerator, the controls in Battlefront II are responsive and crisp. As I became more familiar with the ships available, I began climbing scoreboards, shooting down more enemy starships and playing objectives more efficiently. The sheer scope of Starfighter Assault and the easy-to-pick-up-but-difficult-to-master design of this game mode makes it incredibly fun and with nearly unlimited replay value. While playing the Imperials, I focused on shooting down Rebel ships, and as a Rebel, there was the challenge of finishing the objectives without being shot down. Regardless of which team I played for, there was always a great satisfaction in landing killing shots on enemy starfighters and going on kill-streaks that I never was able to manage in Galactic Assault. It got to the point where I improved sufficiently to have the chance of making use of three of the four Hero ships. Automatically locking onto an enemy starfighter à la Battlefront is gone – aiming and leading shots is entirely a skill-based endeavour now, and while Criterion provides a helpful reticule to assist in aiming, it ultimately falls on players to learn how to best move their ships around. These elements come together to provide a game mode that is exceptionally entertaining to play, rewarding skill and encouraging new-time players to try their hand at flying. 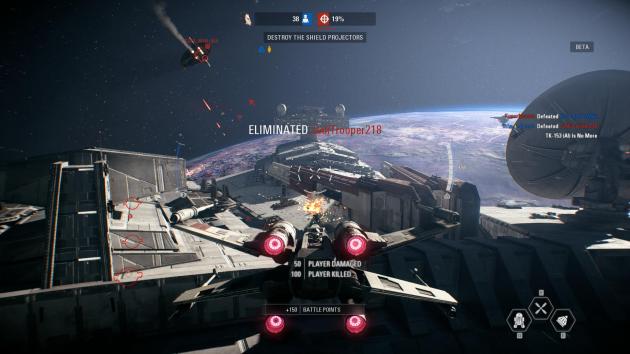 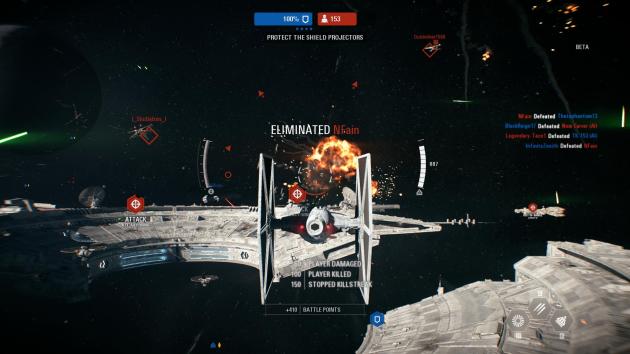 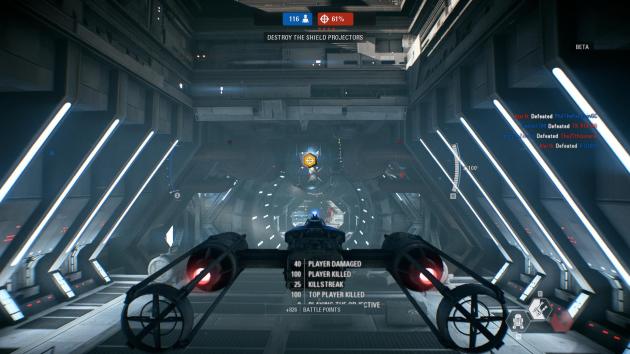 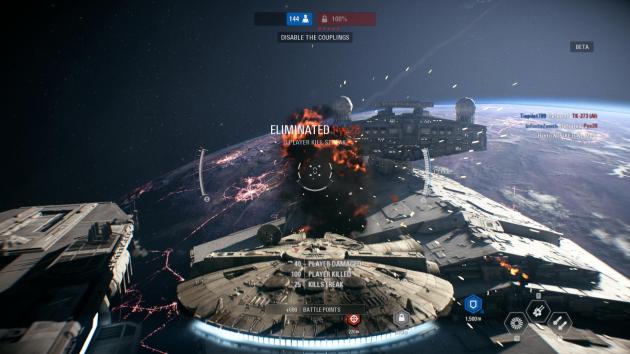 The words “pure fun” are the most suitable for describing the Starfighter Assault game mode of Battlefront II: the mode feels a great deal as though Criterion applied the lessons learned from Rogue Leader. The game modes are well-structured into distinct phases, but seamlessly woven together. Instead of purely AI opponents, players now have a chance to engage one another, adding a new degree of challenge; gone are enemy fighters that can be shot down, replaced with superior AIs and human opponents, the ultimate challengers. Because players can be assigned to different sides of the story, there is a fantastic opportunity to explore “what-if” scenarios. While I don’t think any of the most iconic missions from the trilogy or prequel appear in the full Starfighter Assault, the concept has proven remarkably fun in the open beta, coming the closest since 2005’s Battlefront II to re-creating the experience that players experienced in Rogue Leader. Coupled with authentic aural and visual elements from Star Wars, Starfighter Assault has proven to be the remastered experience of Rogue Leader that I’ve been longing to experience again since the days when I played the game on a GameCube: I am greatly looking forwards to seeing how the other maps play out, and through the open beta, it is evident that Battlefront II has made a serious effort to bring a critical component of Star Wars into the modern age. If the version we’ve seen in the open beta is an accurate representation of how the game mode will handle in the full game, this is a very compelling reason for buying this game closer to the Christmas season, when the spirit of Star Wars will be in full swing as Episode VIII: The Last Jedi premieres in theatres.