2 Comments Posted by infinitezenith on October 13, 2017

“Your task will not be an easy one. Your enemy is well-trained, well-equipped and battle-hardened. He will fight savagely.” —General Dwight D. Eisenhower

The opening stages of the One Year War begin when Zeon launches a surprise attack on Side 2, eliminating Hatte altogether, while Kycila leads task force in capturing the lunar cities of Granada and Von Braun. Amuro and his friends are caught attempting to sneak into a restricted area in Side 7, but Amuro is spared a beating when guards recognise him as the son of Tem Ray. After witnessing the massacre at Side 2, Ramba Ral refuses to participate in Operation British and becomes wanted for treason against Zeon. The Zeons continue with Operation British, dropping the coloney Island Iffish on Earth with the aim of destroying the Federations Jaburo Base, but the coloney break into three sections upon re-entry. The largest pieces impacts with Australia and the sum of the impact halves Earth’s population. Meanwhile, Sayla Mass has become a doctor, and while treating the injured from the political strife breaking out, she learns from a Zeon operative that Casaval is alive, piloting a red mobile suit and later sees him attacking a coloney, after she herself had helped fend off ruffians. While she manages to protect Eduardo Mass, he dies. With Operation British unsuccessful, Zeon launches another attack at Loum. Although their ships are routed by Federation Forces, their mobile suits allow them to even the odds in terms of fighting strength. Char himself steps out into battle, locating the main Federation fleet on short order after pushing his Zaku to its limits. The Origin‘s fifth instalment comes nearly a year after the fourth, and in it, the more horrific stages of the One Year War are illustrated, including the gassing of Island Iffish for the purpose of dropping it as a kinetic impactor. The Origin presents a different take on things than did Gundam Unicorn, but with its high animation quality, is able to capture the sort of devastation that characterises the One Year War, and also illustrate the processes, as well as individuals, behind Zeon’s atrocities.

In contrast with the earlier instalments, the fifth The Origin entry is more fragmented in design, portraying different aspects of the One Year War’s opening stages. From the early Zeon victories to their failed execution of Operation British, from Char’s verbal sparring with the Black Tri-Stars to watching Sayla Mass defend her adopted family and home, The Origin presents a series of war stories that show where everyone’s at since the events of the previous episode. The episode does not follow any one character in particular; in doing so, it is able to capture the scope of the One Year War. In this episode’s presentation, one also gains the impression that Zeon’s worst atrocities and actions were the consequence of Gihren’s decisions. Gihren has been counted as the Universal Century’s incarnation of Adolf Hitler, sharing Hitler’s Social Darwinism beliefs, as well as placing an undue amount of emphasis on Wunderwaffen. Gihren’s beliefs are extreme enough that his father, Degwin, denounces him: Degwin’s original ambitions had been to gain independence for and rule over Zeon, whereas Girhen sought to dominate and destroy the Federation entirely. The Origin evidently presents Gihren as having architected the suffering and deaths of billions; the lingering animosities and injustices indirectly lead to the formation of the Titans and precipitate the rise of three Neo Zeon factions following the downfall of Zeon. 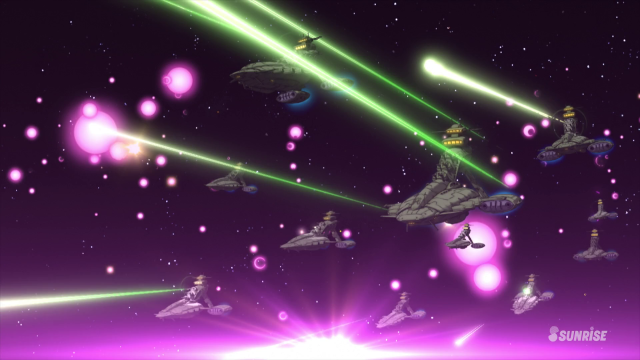 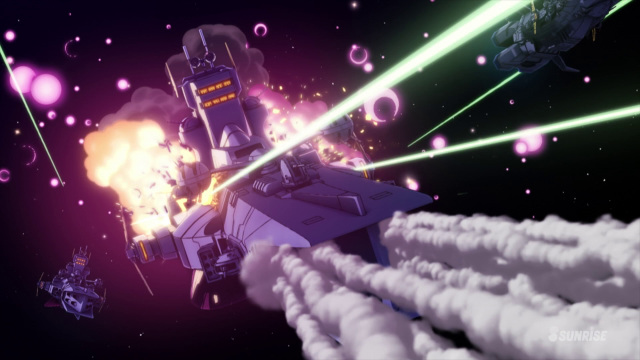 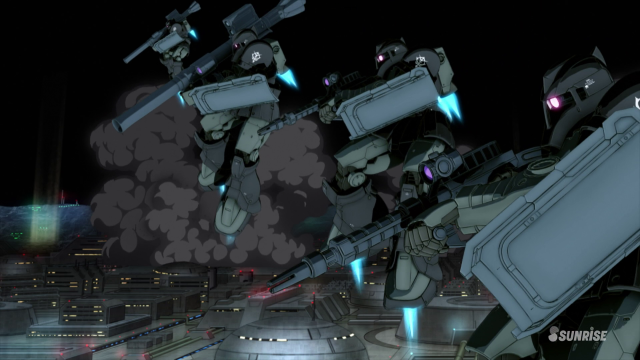 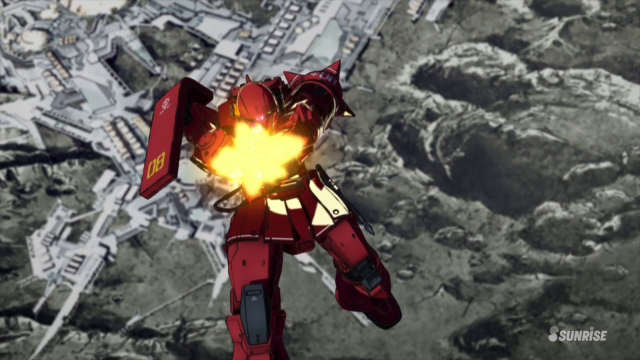 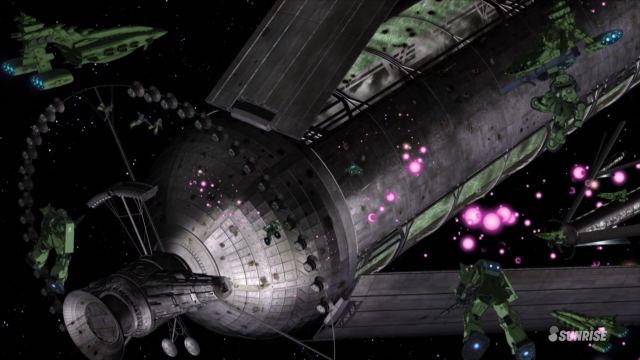 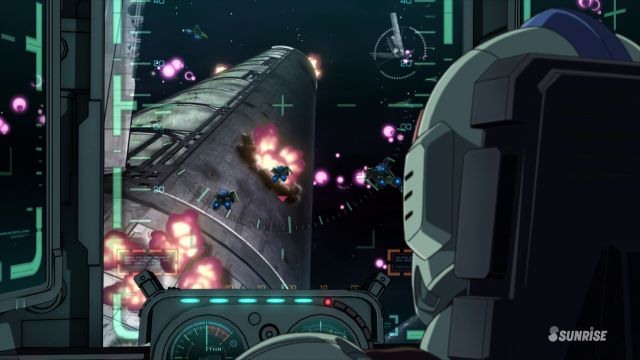 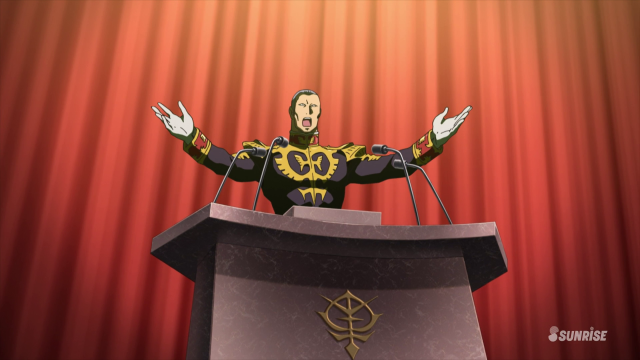 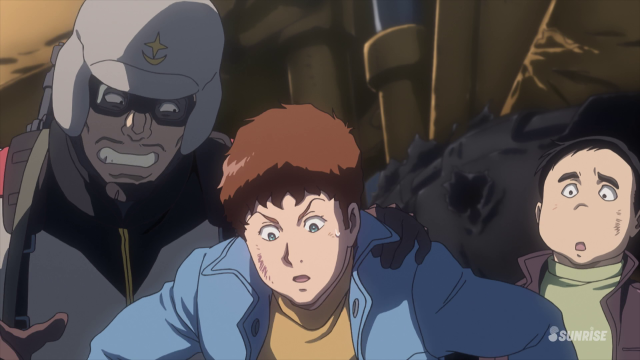 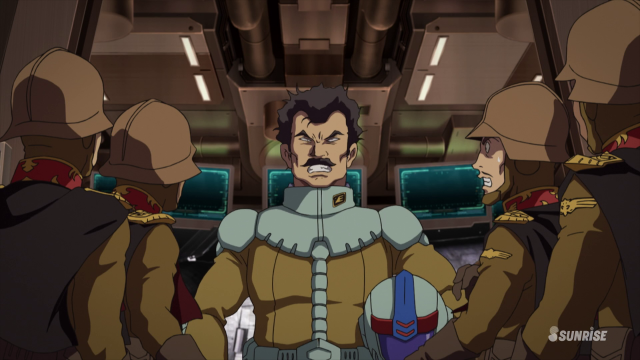 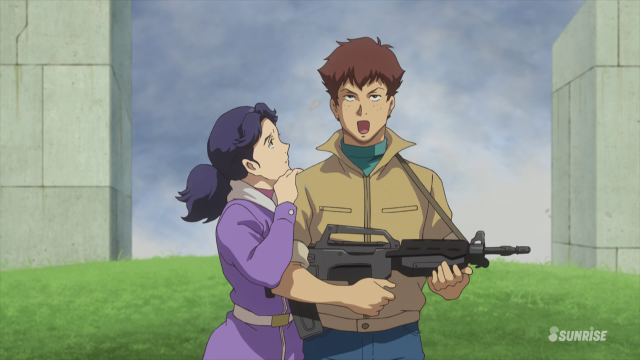 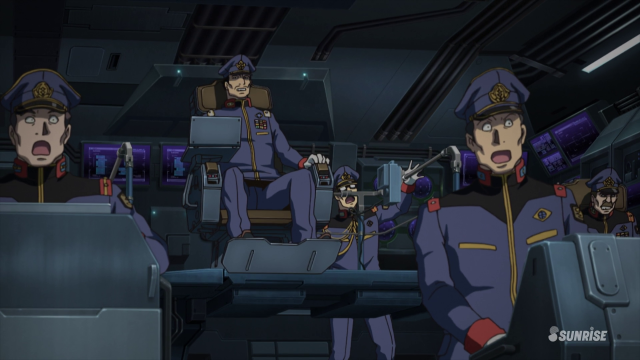 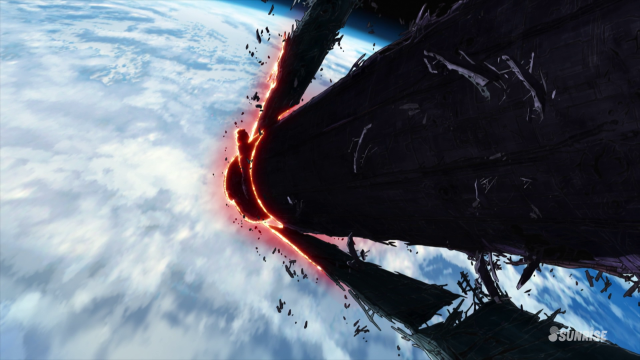 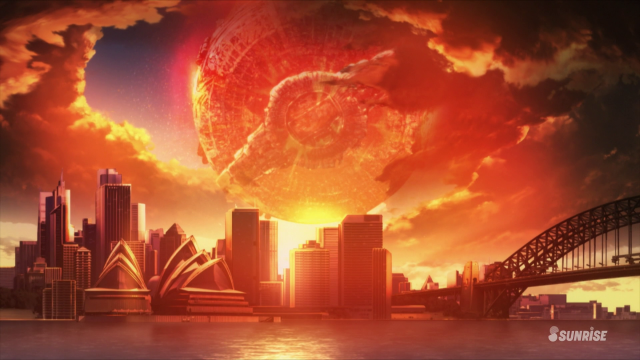 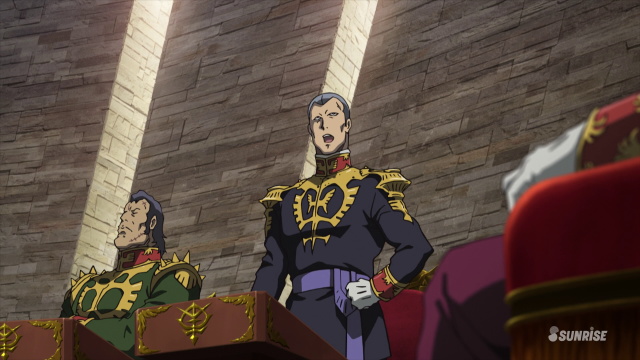 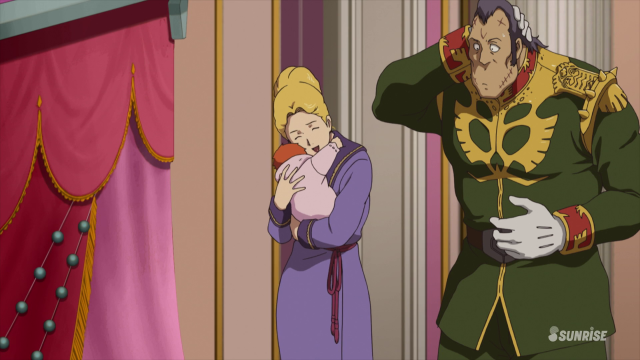 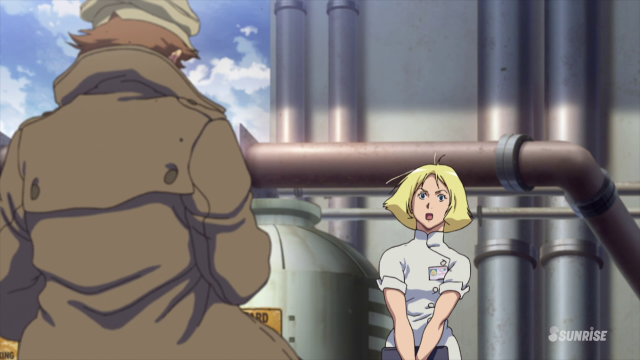 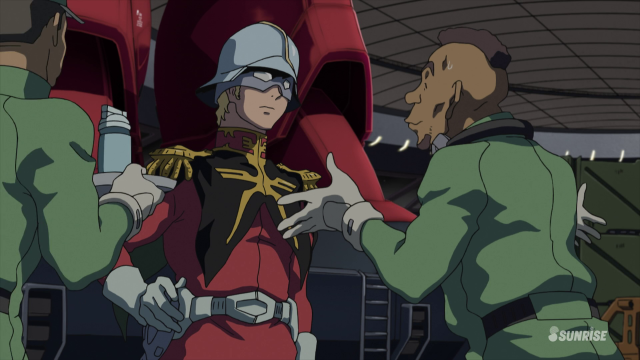 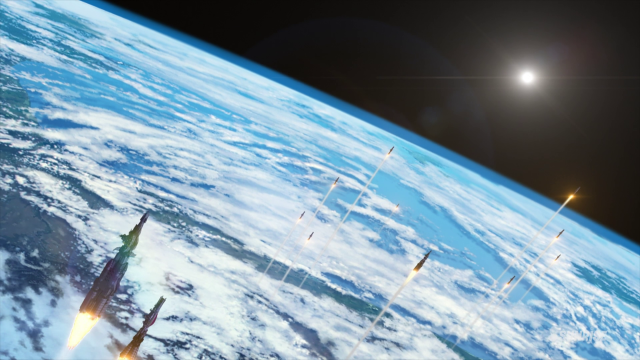 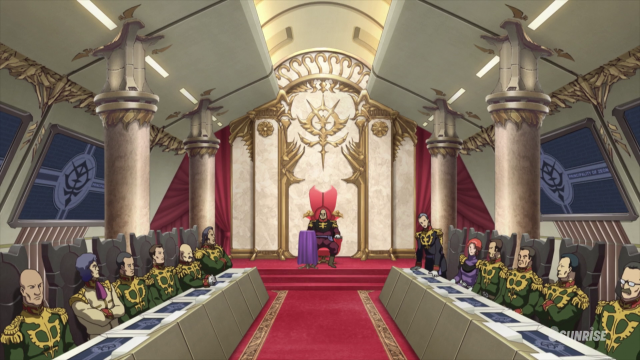 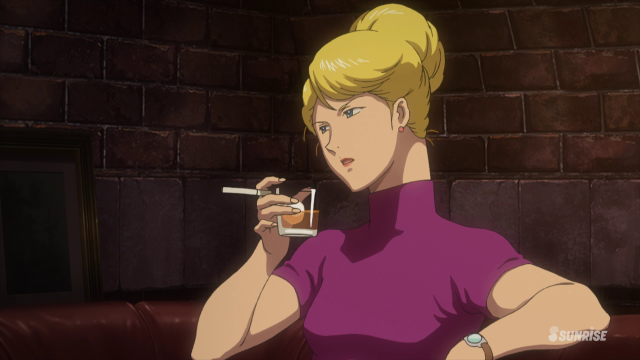 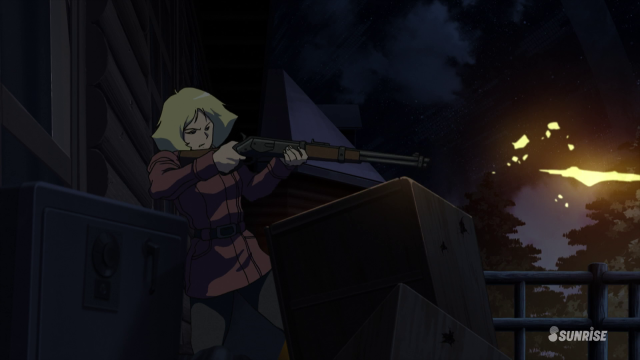 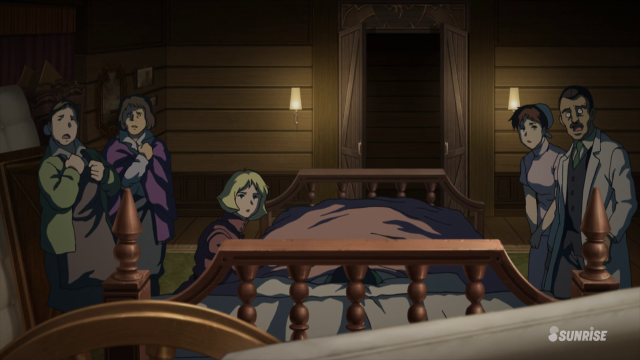 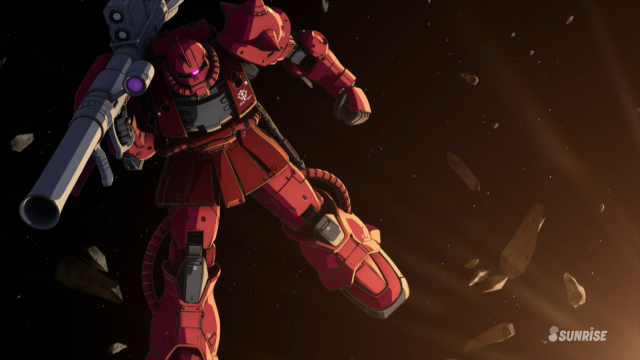 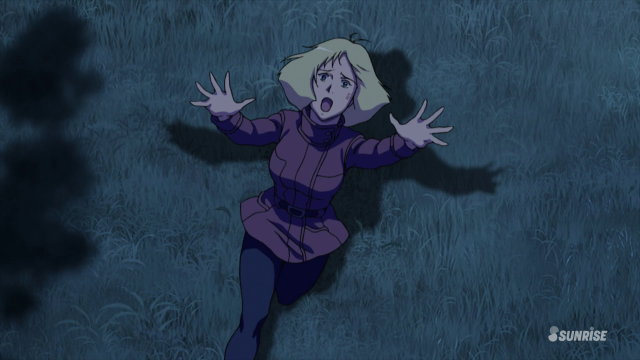 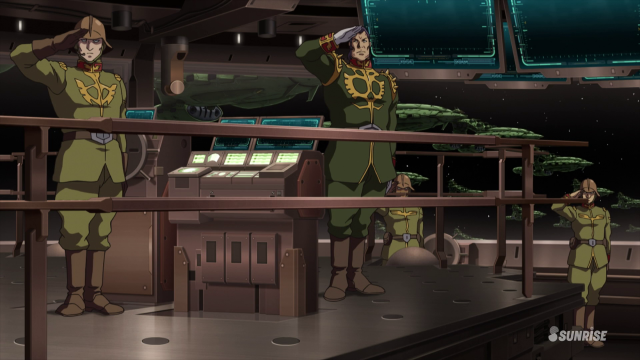 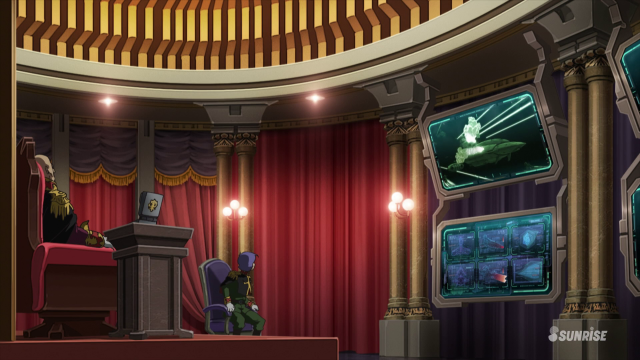 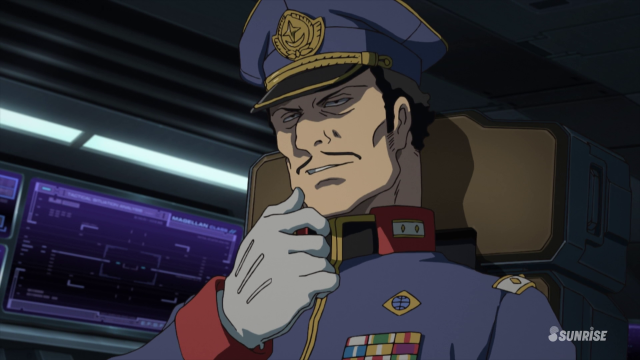 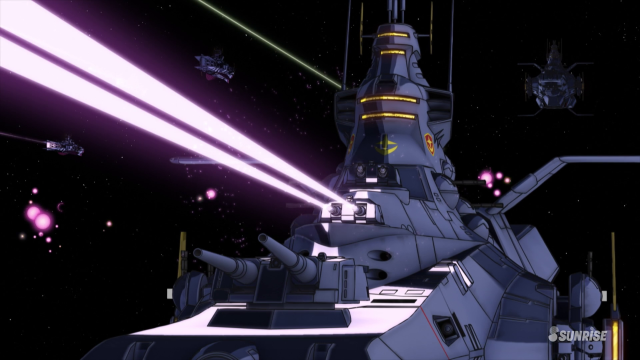 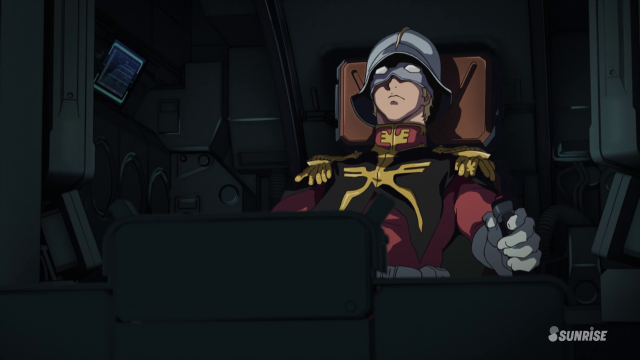 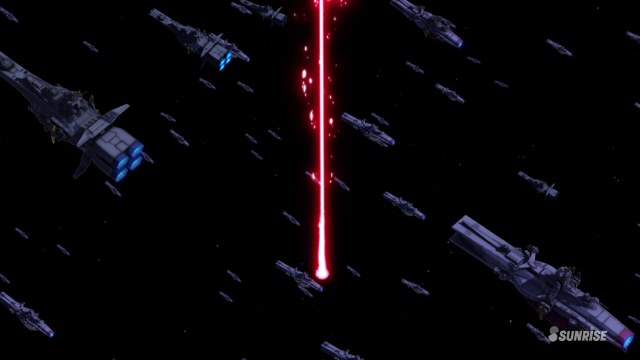 With the next and final chapter of The Origin releasing in May 2018, there remains a ways to go yet before we see the conclusion of The Origin, which deals with Char and his ascendancy in Zeon as the ace pilot. I’ve longed to see the Battle of Loum with modern animation, and the fifth instalment of The Origin does just this, showcasing the One Year War’s most infamous battles in fantastic detail. From the technical aspects of Zeon’s Musai-class compared against the Federation’s Salamis and Magellan-class vessels, to Char’s requests for removing the limiters on his Zaku and participation in some of the battles, The Origin continues in following the development of the hardware involved in fighting the wars, as well as the people fighting them. Of note was Ramba Ral’s refusal to participate in Operation British, reflecting that while the Zeons were undoubtedly an antagonistic entity, there remained at least a handful of reasonable individuals in Zeon. Ramba Ral’s role in The Origin differs greatly from what it was in the original Mobile Suit Gundam, where he was intended to represent an ordinary but devoted soldier whose death came about from the tragedy of conflict. The Origin takes numerous liberties with the narrative, but so far, things have remained consistent: ultimately, I am quite excited to see what the last chapter of The Origin will entail, and it would be most pleasant if Amuro Ray and the RX-78 II makes a combat appearance in the finale to fight Char and his Zaku II Custom.