Insights in Character Songs from Glasslip: A Refrain to Sachi Nagamiya (Kimi e to Refrain Lyrics)

2 Comments Posted by infinitezenith on November 8, 2017

“Life is really simple, but we insist on making it complicated.” —Confucius

Released late in October, the Glasslip character song album, Utagoe no Kakera (Fragments of Singing Voice) featured performances from each of the characters in Glasslip; while Glasslip itself proved to be a disappointment on multiple fronts, from an inconsistent narrative to misleading symbols and unclear character goals, the anime’s audio and visual aspects were particularly strong. Glasslip‘s musical score served to project a particular atmosphere and mood where character dialogue and actions were inadequate; the soundtrack’s combination of classical pieces with incidental tracks work in conjunction to convey a sense of wistfulness and confusion that invariably accompanies love. As a character song album, none of the vocal tracks in Fragments of Singing Voice would have made it into Glasslip proper, but each song serves to do what the anime could not: they provide more insight into each of the characters and their personalities, beliefs and desires. Of the tracks on Fragments of Singing Voice, the one that stood out most was Sachi Nagamiya’s Kimi e to Refrain (君へとRefrain, “A Refrain To You”), performed by Risa Taneda. In contrast with Sachi’s characterisation as a quiet individual fond of books, Taneda’s delivery of Kimi e to Refrain is spirited, upbeat and sexy, giving another perspective of one of Glasslip‘s least explored characters. It is easily my favourite song on the Fragments of Singing Voice album, and curiosity led me to translate the lyrics, which yield a considerable amount of insight into Sachi’s character well beyond what viewers saw in Glasslip. 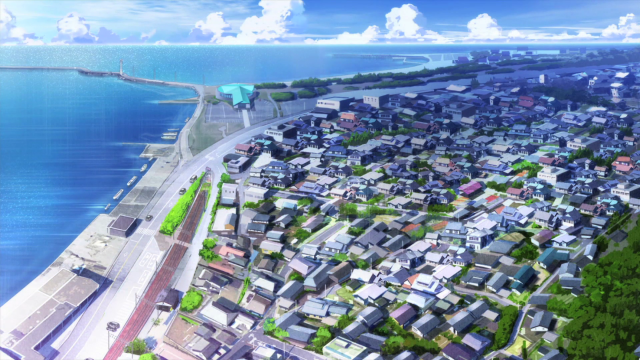 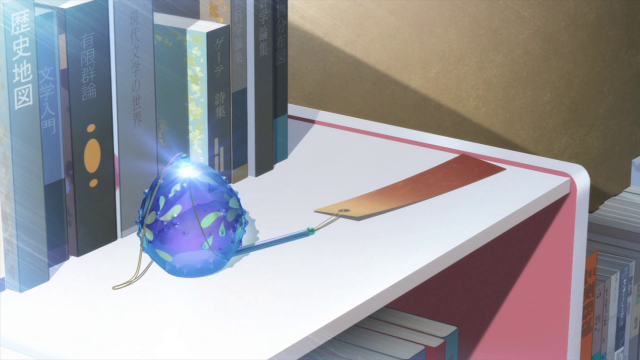 Red sparks that fall from the sparkler
Burst with warmth fleetingly

A trivial rumour sways and moves my heart
Finding the reasons for my frustration and embracing it
I don’t want to forget, this moment will become the answer
I want to move forward, I want to laugh beside you

If we look up, there are thousands of stars with stories
We can move from the promised place to tomorrow without hesitation

Kimi e to Refrain speaks of Sachi’s worldview: fond of reading and quiet environments, Sachi feels that she has troubles understanding how she feels about those around her. Tempted by her desire to move into the future but also being tempered by her doubts about the unknowns, Kimi e to Refrain juxtaposes these conflicting feelings, and the lyrics shows that Sachi is the sort of person who ultimately can move forwards as long as she is with someone to support her. In Glasslip, Sachi frequently leans on Tōko for emotional support until Tōko dissolved a promise where their group of friends would remain such. Subsequently, Hiro begins spending more time with Sachi, acting on his feelings. Kimi e to Refrain is seemingly ambiguous as to whether or not the person Sachi most wishes to spend her future with is Tōko or Hiro; the lyrics have a certain degree of romance to them. In the song, Sachi expresses that these feelings are as beautiful and transient as fireworks, and that as others have undoubtedly shared this experience previously, she’s willing to seize the moment and make the most of things. In describing the romantic and transient nature of her feelings, Sachi is likely referring to the moment in Glasslip‘s tenth episode when she expresses her feelings for Tōko and Hiro. Despite having long felt protective of Tōko and hating Kakeru for disrupting the status quo, Kakeru’s actions indirectly result in Hiro acting on his feelings for Sachi, beginning the start of a hitherto unexplored dynamic between the two. 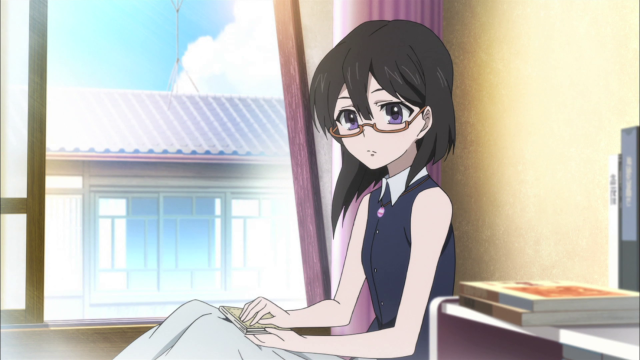 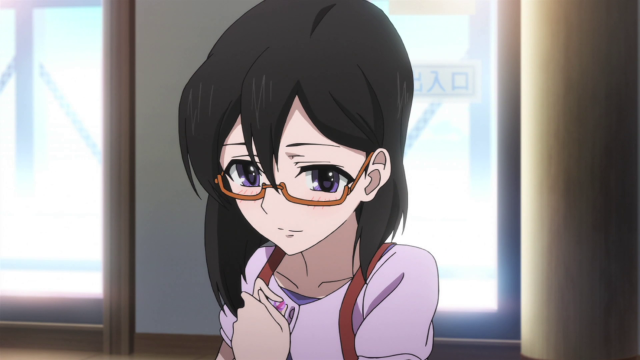 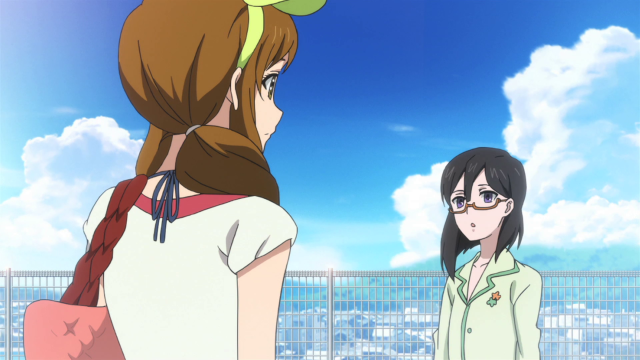 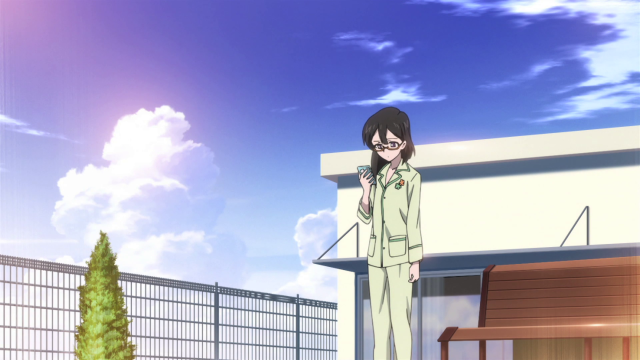 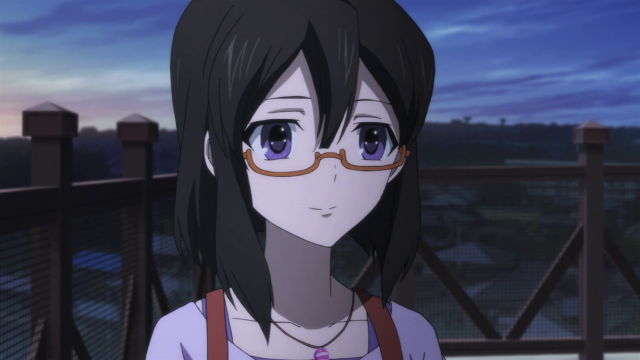 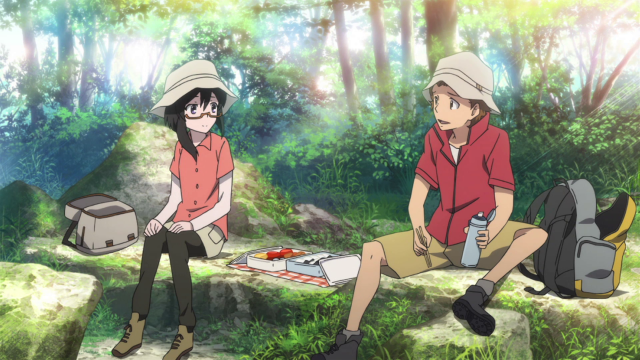 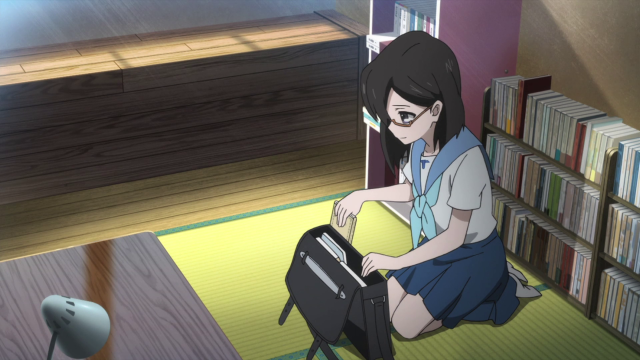 Because notions of journeys, heading into the future and moving forwards are so prominently mentioned in Sachi’s Kimi e to Refrain, the song strongly suggests that this person she wishes to rely on, to walk the future with, is Hiro. Things began changing under the fireworks for the pair, and rumours of a romance between Hiro and Sachi definitely circulate, which Kimi e to Refrain references; because Tōko’s friendship with Sachi is an older one, Kimi e to Refrain is not likely referring to her. Instead, it is these newfound feelings that prompts Sachi to want to seize the future with more confidence even as she hesitates, owing to her old friendship, and Kimi e to Refrain‘s final stanza suggest that the brilliance of these emotions that lead her to want to move on. Consequently, through Kimi e to Refrain, it becomes clear that Sachi is able to let go of her reliance on Tōko and wholeheartedly pursue her relationship with Hiro, whereas previously, she was struggling to understand how she felt about both Hiro and Tōko. This is evident in the progression of events in Glasslip, where Sachi begins spending more time with Hiro, pursing the future that she’s so uncertain about. While existing perspectives remain adamant that Sachi has feelings for Tōko, Kimi e to Refrain clears up one of the elements that Glasslip began exploring, and it is quite apparent that Glasslip could have succeeded in illustrating the turbulent nature of relationships as youth begin exploring them had the anime chosen to focus on these aspects sans any supernatural, Newtype-like phenomenon.

2 responses to “Insights in Character Songs from Glasslip: A Refrain to Sachi Nagamiya (Kimi e to Refrain Lyrics)”