Amanchu! Advance: Review and Reflection At The Halfway Point, and Remarks on Miracles

“I never bullshit, Pickle Man. This can only end with one of us dead, and I have never died.”
“That will be your downfall, Jaguar: not being open to new experiences.”

On an autumn day, Hikari runs into Kokoro, who is buying Marron Pie for her parents. She subsequently spends the afternoon with him, and they walk under the brilliant autumn foliage of a nearby park together. Meanwhile, Futaba is enjoying a cool afternoon at a café with a book, but falls asleep and has a lucid dream where she’s a witch. She takes another one of the café’s patrons into the skies with a broom and soars over town, before flying to a park, where sakura blossoms are blooming. When Futaba reawakens, she recounts her experiences with Hikari. Later during a dive using drysuits, Hikari notices that Futaba is highly motivated. Futaba panics when she finds herself unable to descend with the others, and is saved by Hikari and Mato; Mato lectures Futaba on the dangers of a rapid ascend. During lunch, the diving club meet Hikari’s younger sister, Kodama, and with encouragement from her friends, Futaba’s motivation is restored. While diving, Mato finds herself in imminent danger of injury, but is saved by the “Black Mermaid”, a gargantuan diver. He signals for them to accompany him; Mato, Hikari and Futaba accepts, so he brings them to a beautiful reef under the ocean. It turns out that the Black Mermaid is Hikari’s grandfather, who is an experienced diver. During Halloween, Futaba and Kokoro compete to earn the prize from a scavenger hunt: a kiss from Prince Hikari. Determined to win, Futaba overcomes her fears of talking to a stranger with a costume beard and pushes for the finish line, tying with Kokoro, who had his sights set on winning the giant octopus stuffed toy. Hikari and Futaba relax an exclusive spa with Mato and Ai, and later, Mato wonders when she lost sight of the magic in the world. Thus, we are at the halfway point of Amanchu! Advance, and by my admission, Amanchu! Advance is a step away from the grounded, ordinary setting of its predecessor. Fantastical escapes are explored, blurring the line between reality and fantasy: Futaba frequently alludes to this message, which is a recurring theme that we’ve seen so far.

One of the greatest joys about sequels are that they offer an opportunity for writers to present different aspects to characters that audiences have already become familiar with. In Amanchu! Advance, Hikari’s character is seen as being more prone to embarrassment: her carpe diem outlook on life has its limits, and she sometimes feels this when things cross the line. However, Futaba has received a more interesting bit of growth in Amanchu! Advance: having long regarded Hikari as a dear friend, her desire to be with Hikari has also manifested a hitherto unexpected side of her character. She’s expressing jealousy now at the prospect of someone else vying for Hikari’s attention, and similarly, has become more protective of Hikari, as well. Futaba’s drive in the scavenger hunt indicates this very strongly, as do her dreams of being the prince to Hikari’s princess. On the topic of dreams, Amanchu! Advance has also given audiences exposure to Futaba’s desires and thoughts through her dreams. While relaxing at a café, the atmosphere leads her to fall asleep. She’s well aware of being in a dream and all the more assertive for it; conjuring a broom and soaring through the skies, Futaba encourages another patron to partake, as well, expressing a confidence and assuredness that we’d previously not seen in her. In conjunction with Futaba’s allusions to the merging of boundaries between the tangible and dreams, I get the sense that Amanchu! Advance intends to convey to its audiences that magical moments are so moving they often feel unreal, and that these magic moments have profound changes, both good and bad, on individuals that experience them; it is clear that Futaba, for whatever other doubts she may possessed, has matured since meeting Hikari. 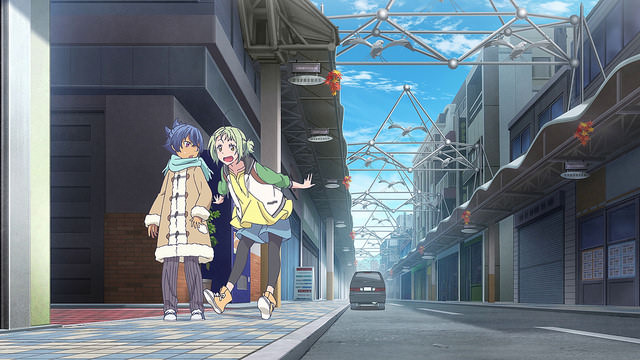 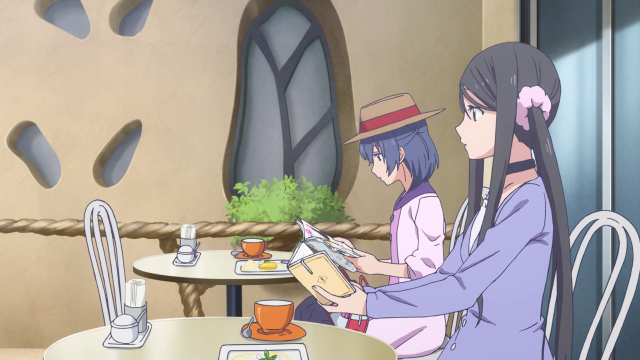 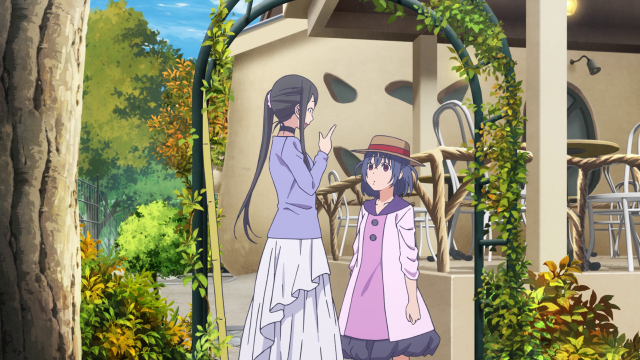 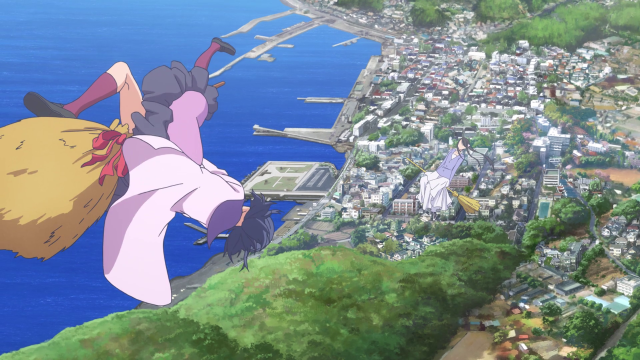 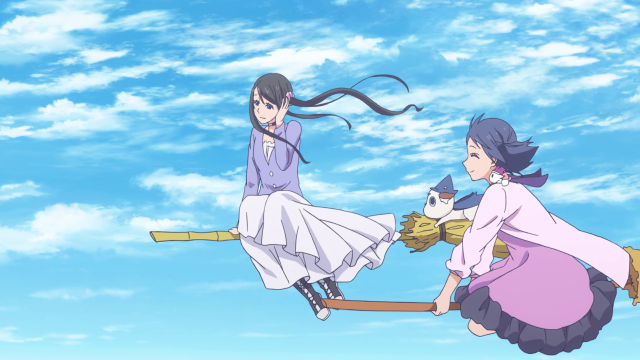 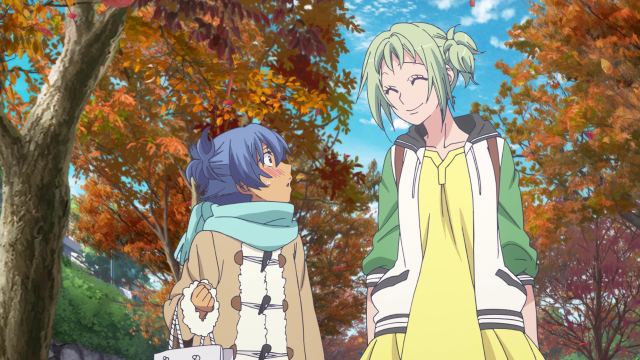 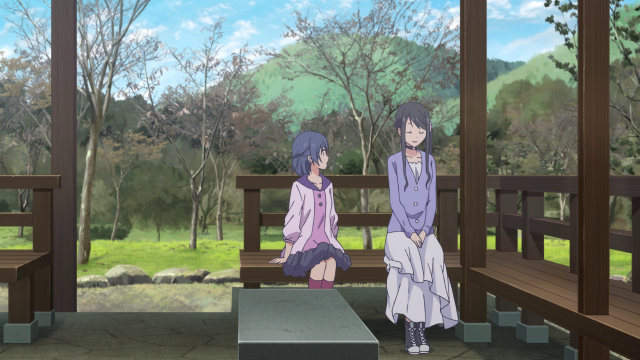 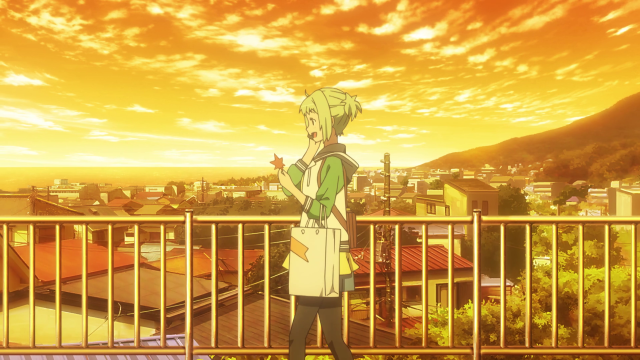 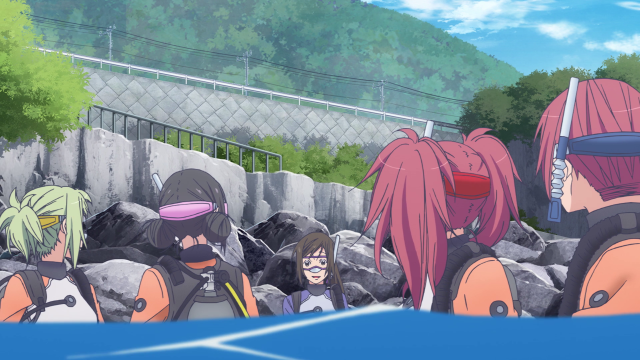 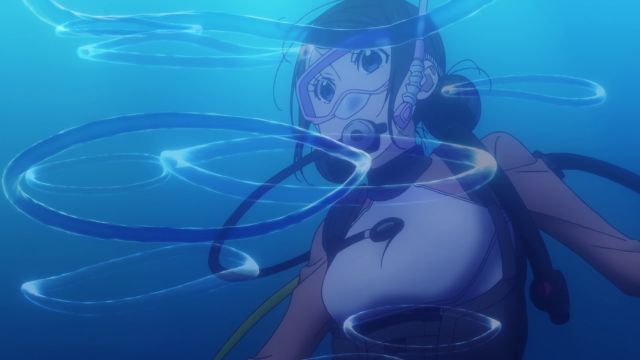 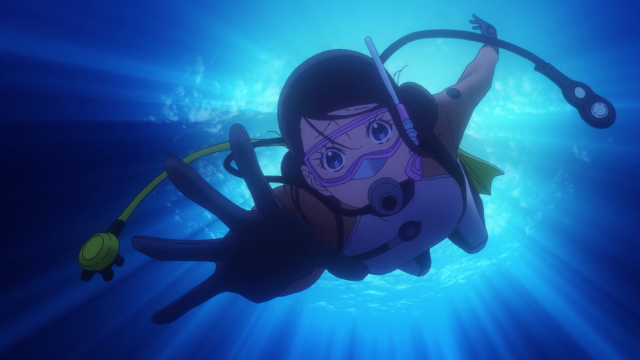 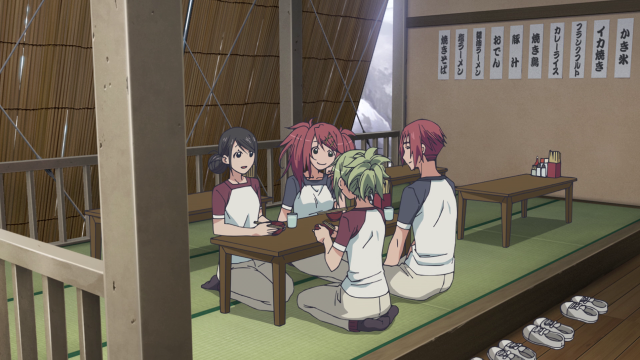 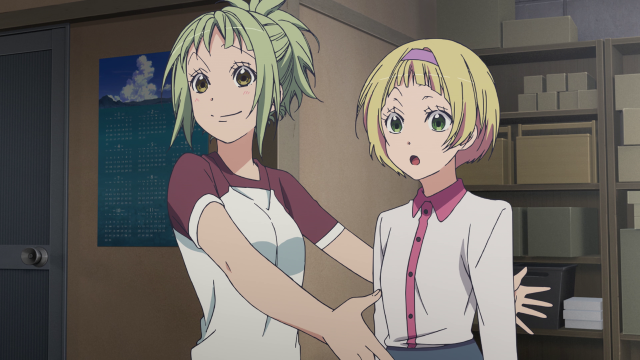 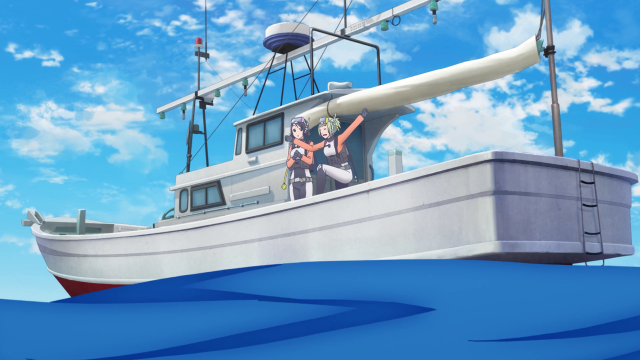 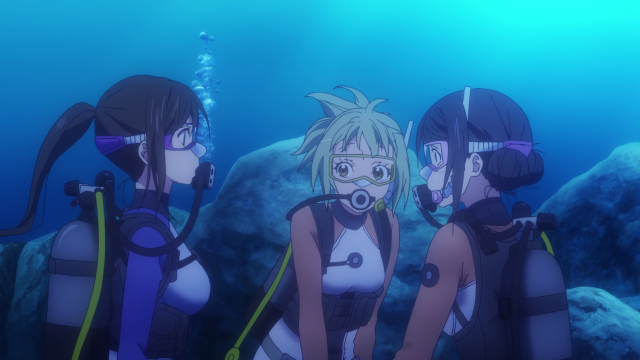 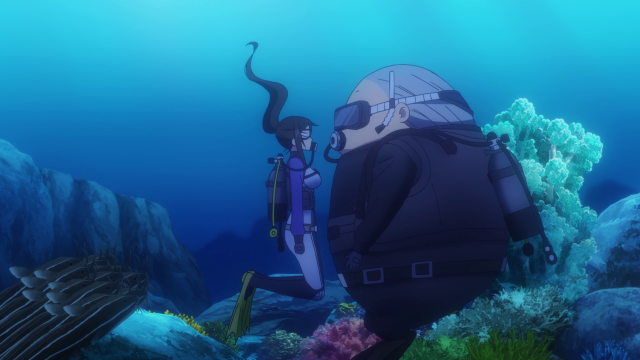 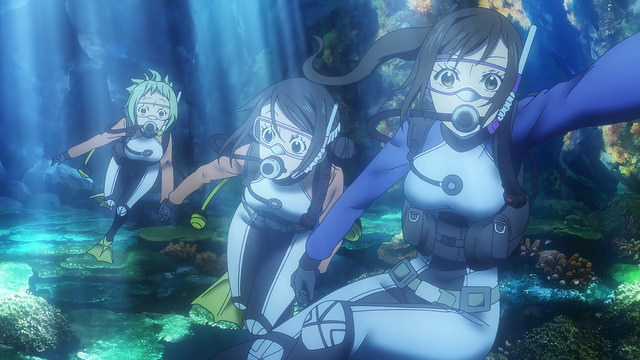 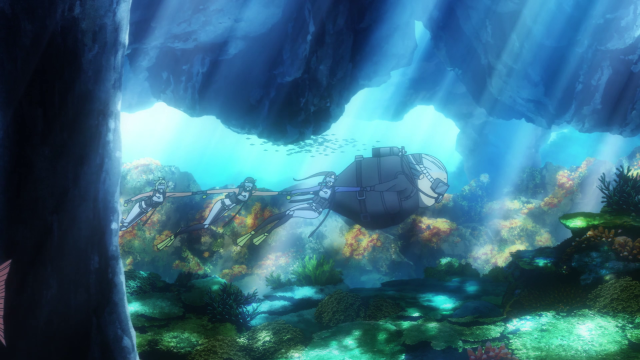 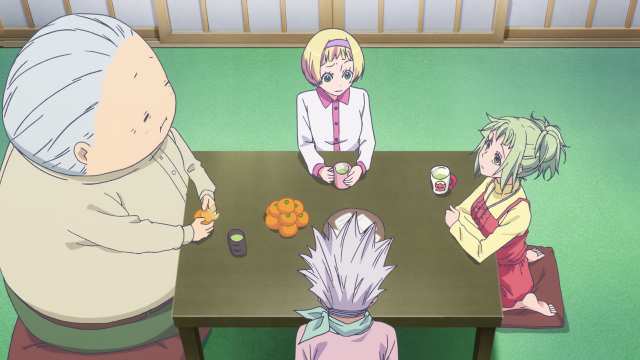 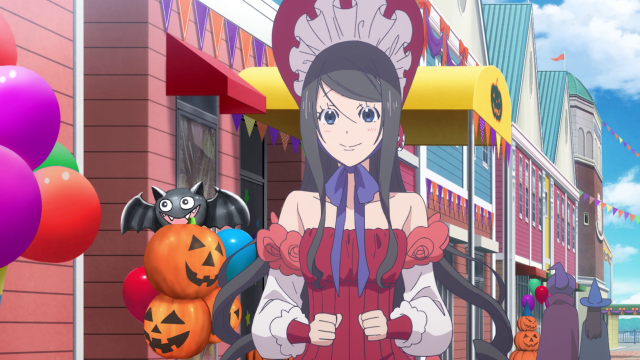 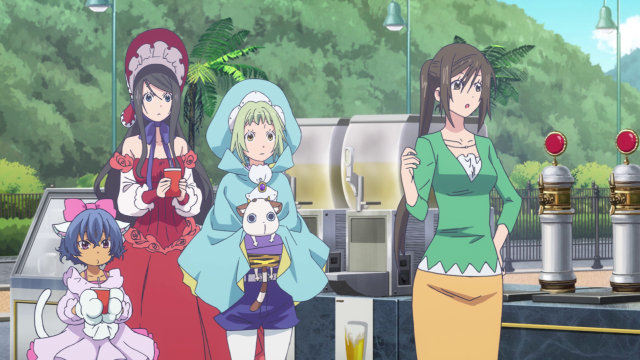 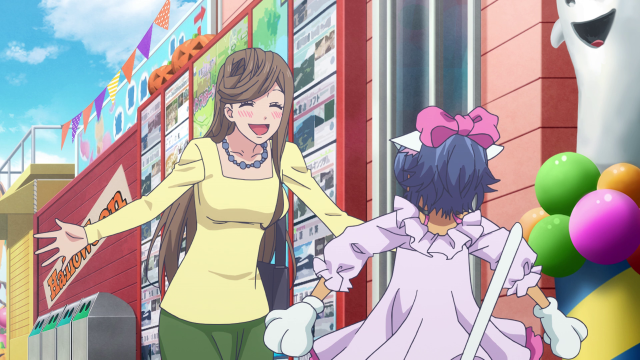 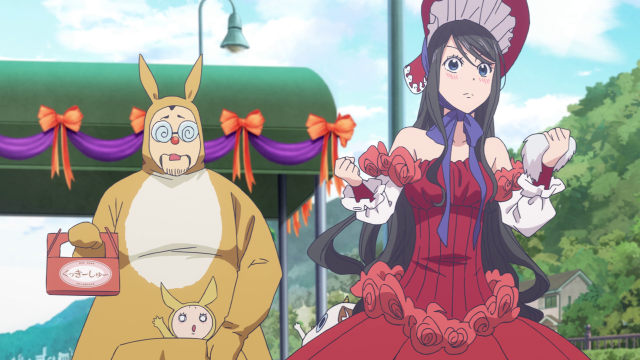 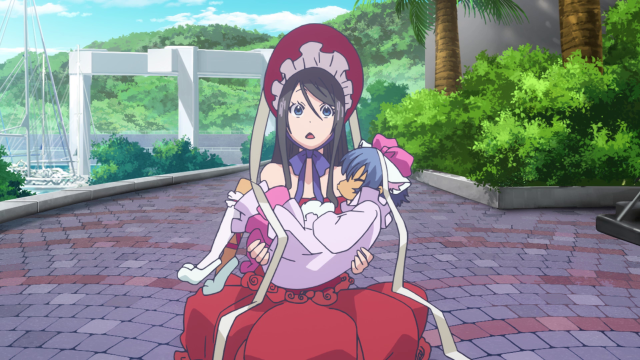 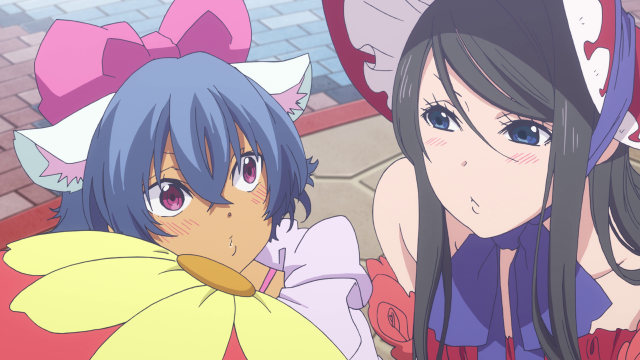 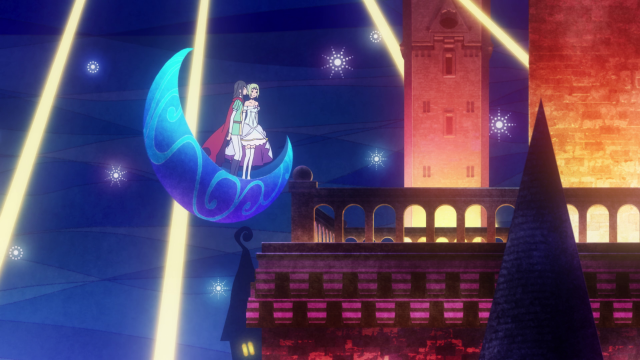 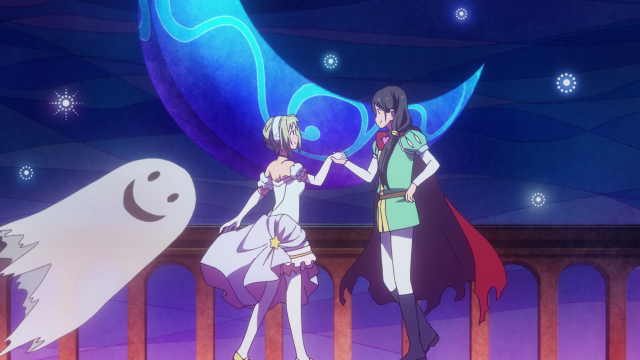 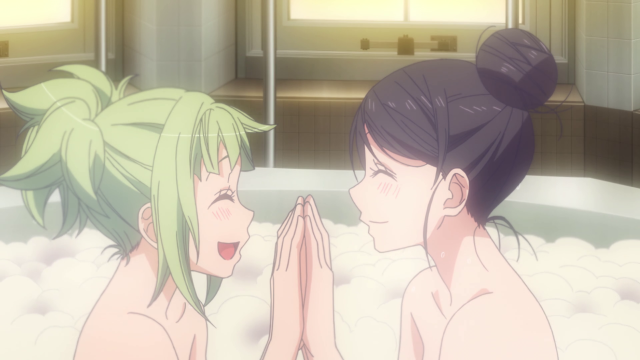 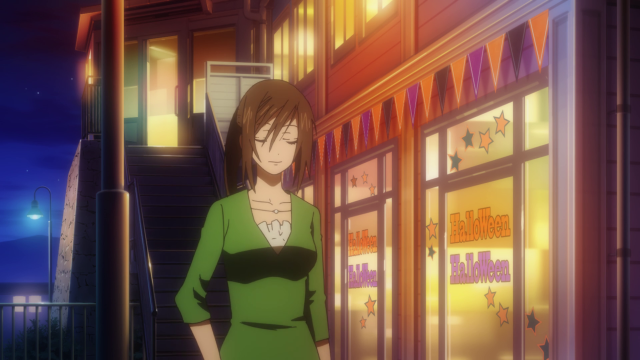 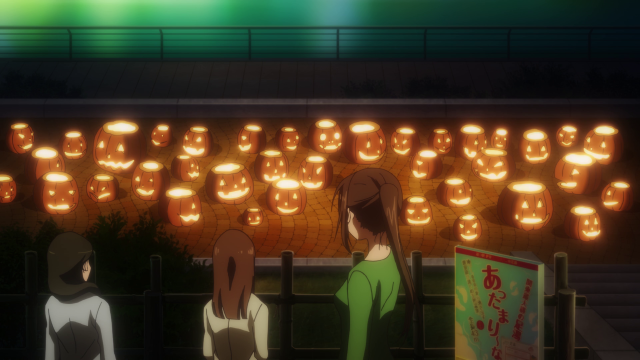 The past three episodes of Amanchu! Advance leading us to the halfway point have moved the series in a direction where it feels more like ARIA; magical moments are more common and suggest that miracles can be found in life’s smallest details. This is a welcome step for Amanchu! Advance, giving the show the chance to portray characters outside of their activities as divers. In doing so, Amanchu! Advance reiterates to viewers that while diving might be what brought people together, people (and not diving) are ultimately at the forefront of everything in Amanchu! Advance. Slow and calming in its pacing, Amanchu! Advance has shown that in spite of its presentation, there are definitely things worth considering. The anime continues to impress with its visual quality, and the music has also taken a step forwards, playing a more visible role in setting the emotional tenor for a moment. The sum of these elements come together to create an atmosphere not unlike that of ARIA, and even though Amanchu! is set in the real world, with a different premise and aims, the similarities between the two series in terms of atmosphere are evident. As we move into Amanchu! Advance‘s second half, I expect that audiences will continue to see different aspects for the characters that give them a more credible feel and make the show increasingly enjoyable. I further speculate that Amanchu! Advance will advance in a direction that sees Futaba working hard for, and earning her advanced diver certification. The rationale for this is that Amanchu! Advance‘s tile, in incorporating the word “Advance” to signify both the act of moving forwards and a higher level of knowledge, is leading Futaba down a path where she is able to do both and mature further as a person.

4 responses to “Amanchu! Advance: Review and Reflection At The Halfway Point, and Remarks on Miracles”