4 Comments Posted by infinitezenith on August 14, 2018

“No one wants to find themselves in a survival situation; you just want to go home, but sometimes, the ordeal becomes long-term survival, longer than seven days. Whether in a life raft, on a mountain, in a desert, or on a tropical island, long-term survival is always about maintaining the will to live, and then becoming familiar with the surroundings.” —Les Stroud, South Pacific, Survivorman

En route to Australia for some winter camping, Nadeshiko and her friends find themselves bailing out of their private jet when the pilot reports that the controls have become unresponsive. They land on an uninhabited tropical island, and after getting themselves oriented, set about trying to find food. They are unsuccessful, and morale plummets, although the girls do their best to remain positive. The next morning, Chiaki is able to find a large number of bananas, and Rin succeeds in catching a large fish that the girls cook later that evening. As they explore other options for cooking their food, they girls also enjoy the tropical weather, but when Nadeshiko begins recanting phrases and terms that remind them of home during a game of Shiritori, Chiaki and the others realise that they need to be rescued. Sprinting to an outcrop, the girls desperately shout out for rescue while Ena sleeps on. Running for half the length of a conventional episode, Survival Camp is a fun addition to Yuru Camp△ that sees Nadeshiko and the others stranded on a beautiful island, reminiscent of Survivorman‘s second season, where Les Stroud survives on a week on an island. I’ve long drawn comparisons between Survivorman and Yuru Camp△, a complement to Yuru Camp△‘s attention to detail and providing practical information on top of a highly relaxing adventure for audiences. While this comparison is not unique to me, the other, perhaps unintended, consequence of comparing Yuru Camp△ to Survivorman is that this blog is prominently featured any search whenever keywords pertaining to Yuru Camp△ and Survivorman are used in conjunction with one another. As a result, upon viewing the contents of the latest Yuru Camp△ OVA, I cannot help but wonder if C-Station’s staff have seen discussions on the ‘net, especially from here, about Yuru Camp△ and decided to take a look at Survivorman, then realised a tropical setting, akin to Les Stroud’s time on a Pacific island, would provide a suitable opportunity to portray a novel story within the latest of the OVAs.

Yuru Camp△‘s original run was an impressive showing, but the Survival Camp OVA takes survival to the next level, drawing numerous parallels with real-world presentations of survival; despite featuring high school girls in place of an experienced outdoorsman, Yuru Camp△ never strays far from reality, and as a result, the Survival Camp OVA is all the more enjoyable for it. After a bailing out of a plane and landing on a tropical island, the girls immediately take stock of their surroundings, and build a shelter. In every episode of Survivorman, Les Stroud runs through the tools and materials he has available to him, before constructing a shelter. Because the island Stroud landed in had a sizeable rat population, he builds a shelter from a derelict boat to keep him off the ground and also, away from the blistering tropical sun. He subsequently creates a rain trap for water, and explores the island in search for food. In Yuru Camp△, after they handle shelter and gain a better idea of their situation, the girls are faced with the struggle of finding food and the attendant decrease in morale: Stroud notes constantly that in a survival situation that a lack of food is one of the biggest struggles he faces, as the reduced energy can impede judgement. Nadeshiko and Chiaki are particularly hard-hit by the initial lack of food, but immediately after Chiaki’s discovery of bananas on the island, and Rin’s success in fishing, the mood turns around immediately. In the South Pacific episode, Les Stroud is in a rare situation where food is not a major concern: he finds coconuts and birds on the island, as well as clams and palm shoots. Once the matter of food and shelter are dealt with, both Stroud and the girls of Yuru Camp△ have the energy to further their situation. This is where Yuru Camp△ deviates somewhat from the Survivorman approach: Nadeshiko and the others take it easy, nearly forgetting that they still need to be rescued, while Stroud will either set about creating a signal for escape or craft transportation to facilitate an exit out of the area. In spite of this, the methods that are seen in Yuru Camp△ is largely consistent with the basics that Stroud recommends in Survivorman. It is important to note that while assessment, shelter-building and finding food is common sense in a survival situation, the aspects that Yuru Camp△ excels in depicting are the subtleties: from notions of morale, to the incredible rush of finding food, Yuru Camp△ captures highly realistic responses amongst the characters, which really gives the sense that Yuru Camp△ could be seen as another take on Survivorman. 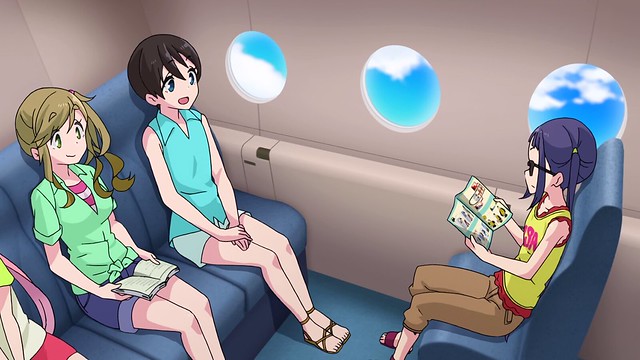 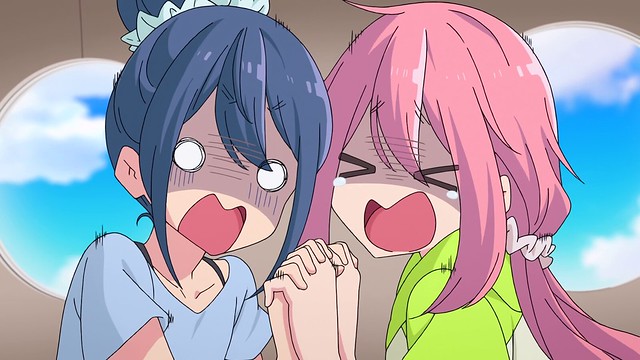 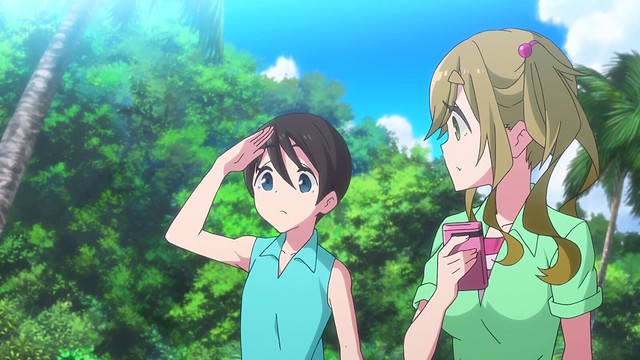 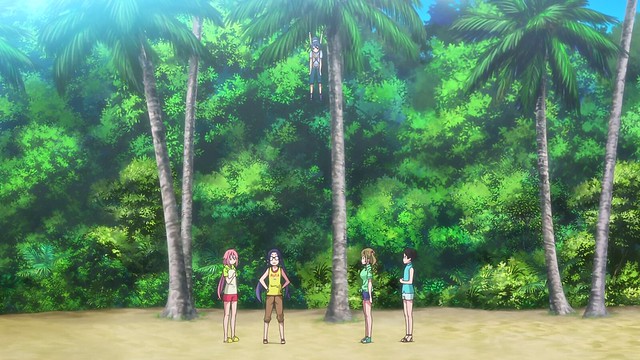 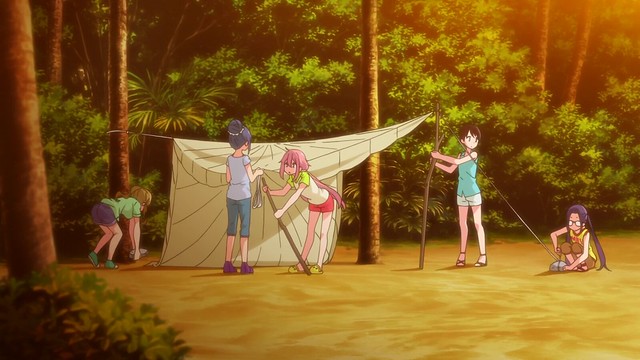 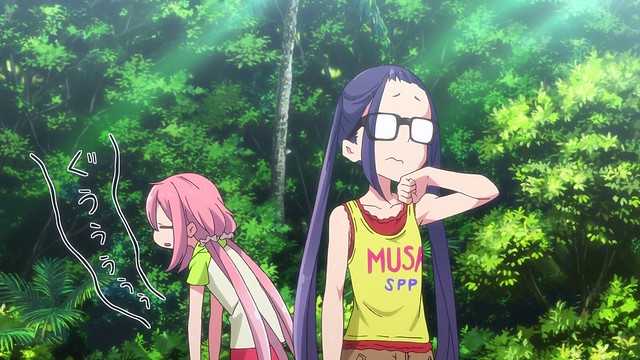 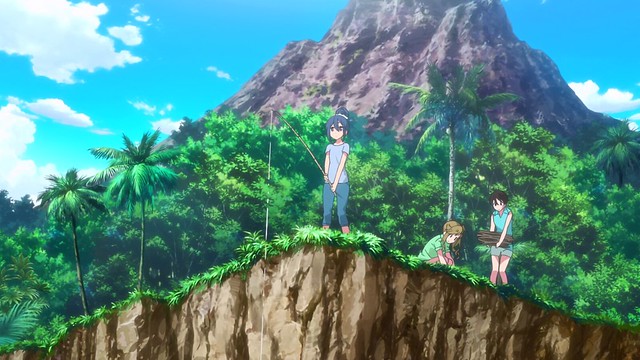 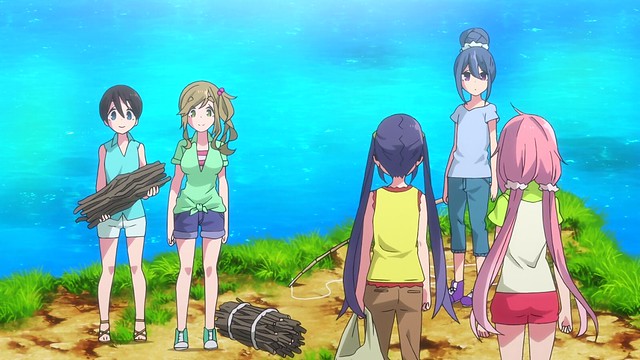 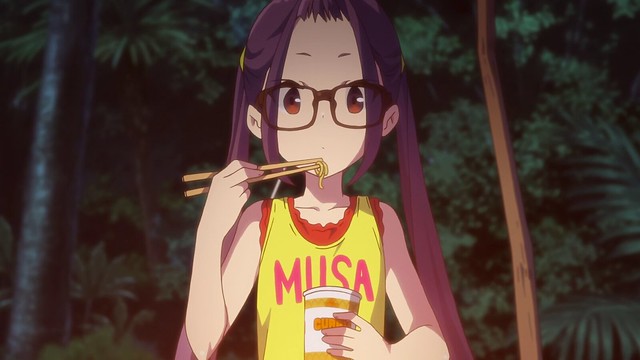 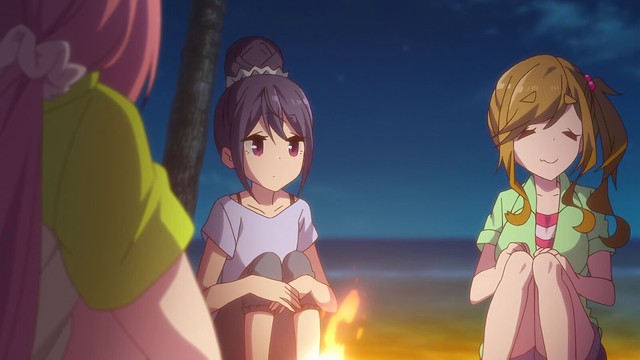 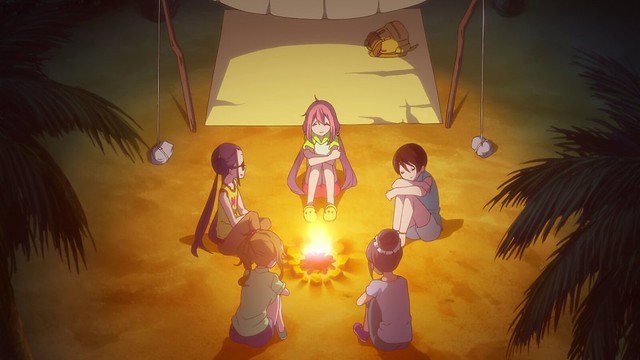 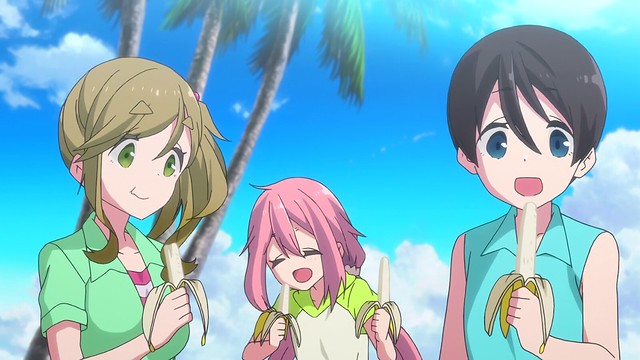 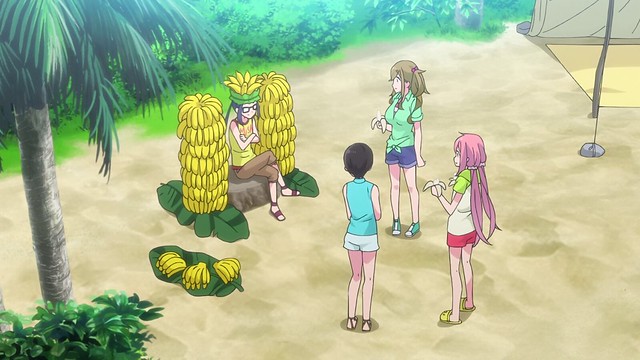 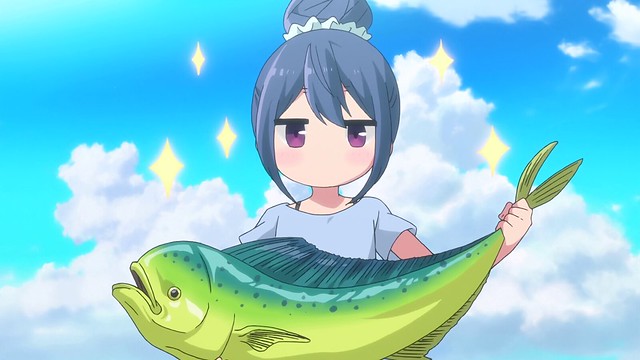 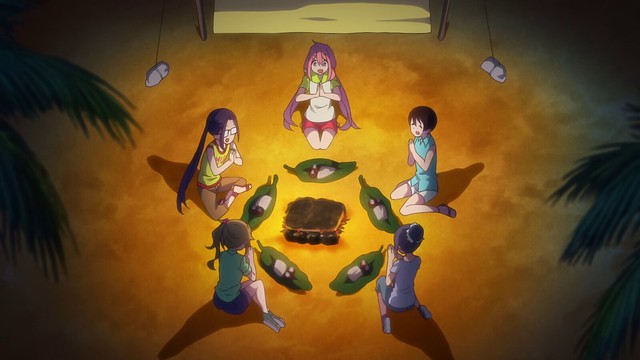 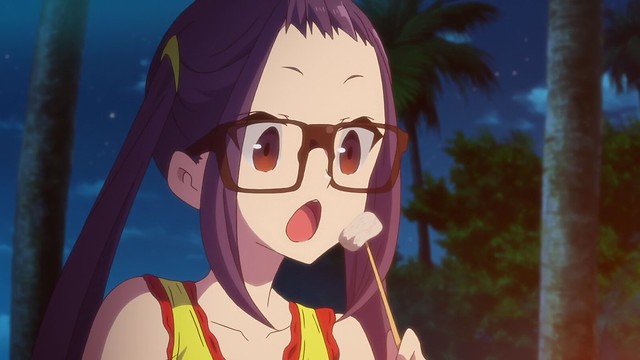 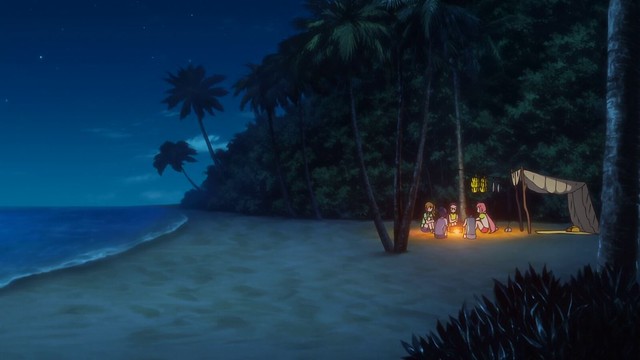 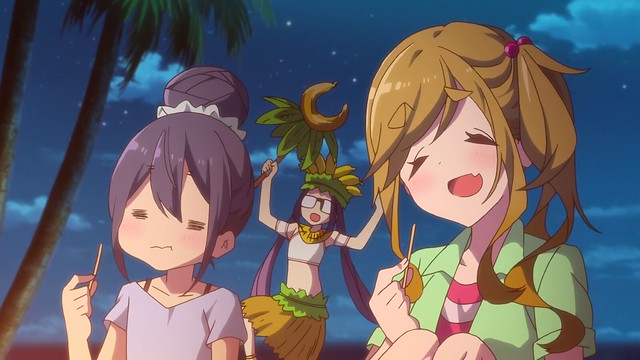 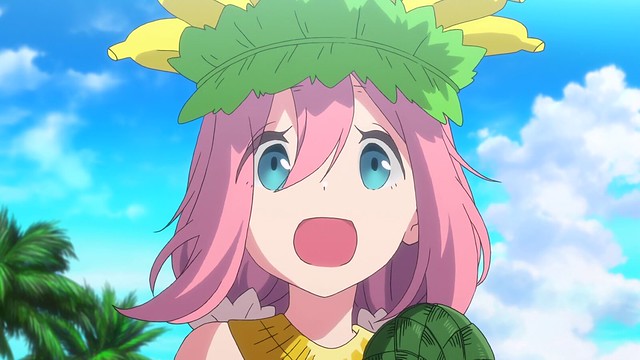 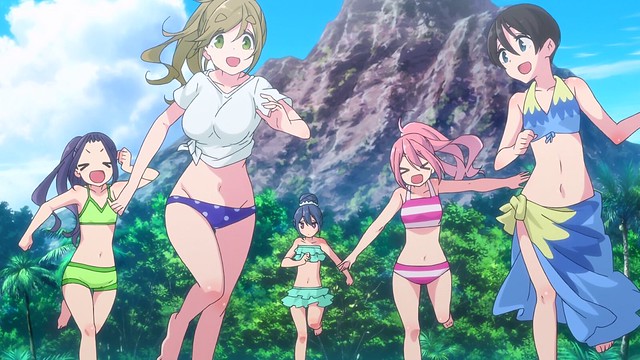 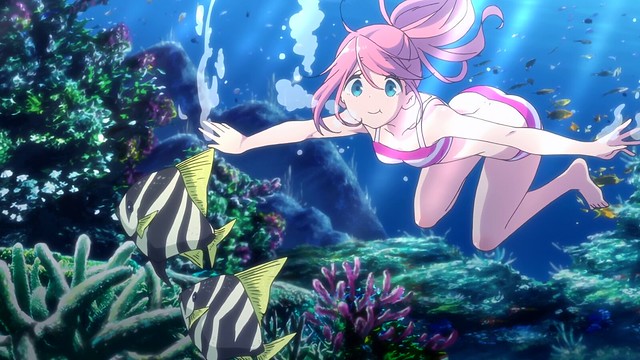 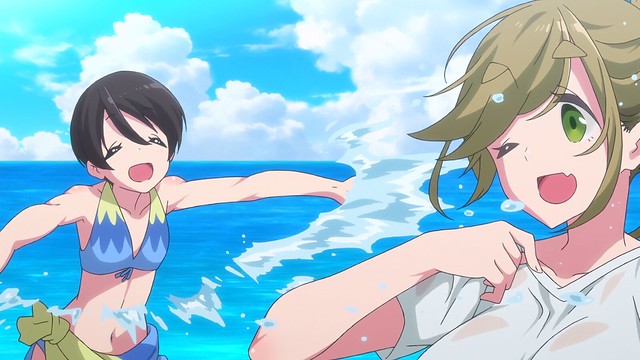 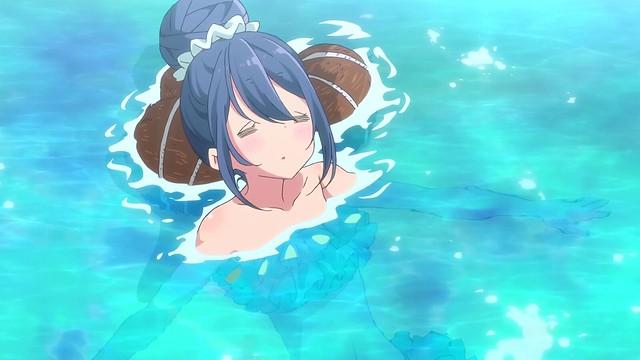 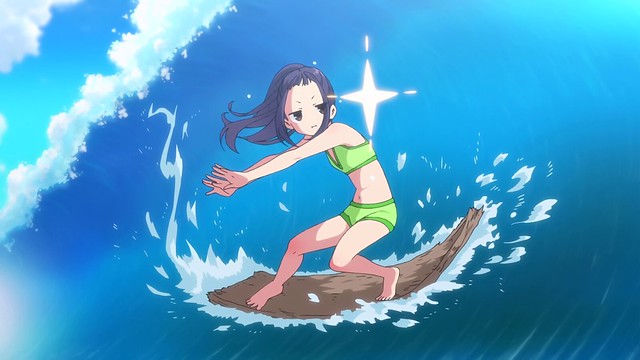 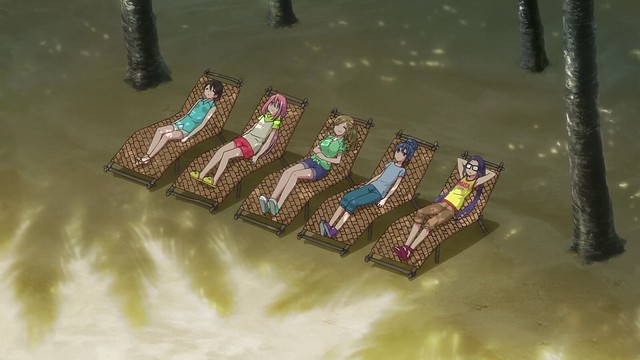 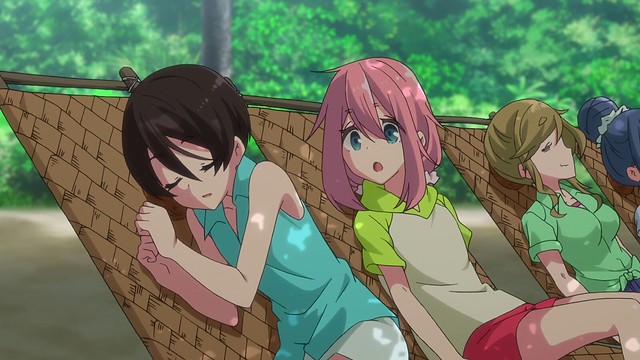 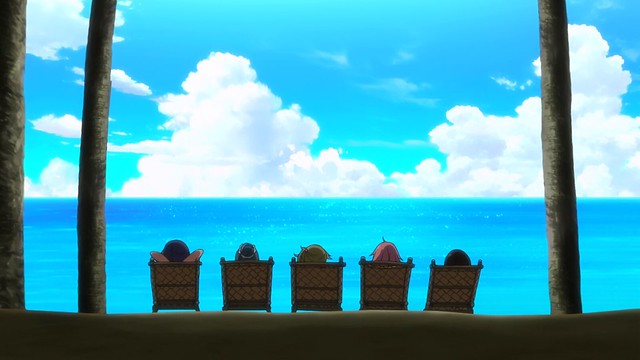 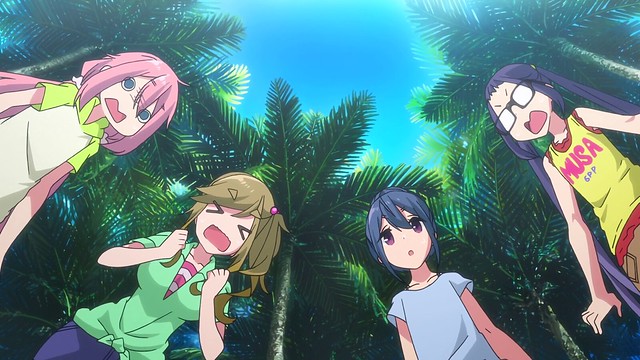 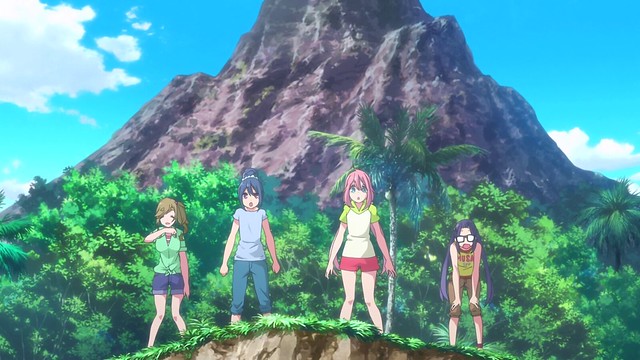 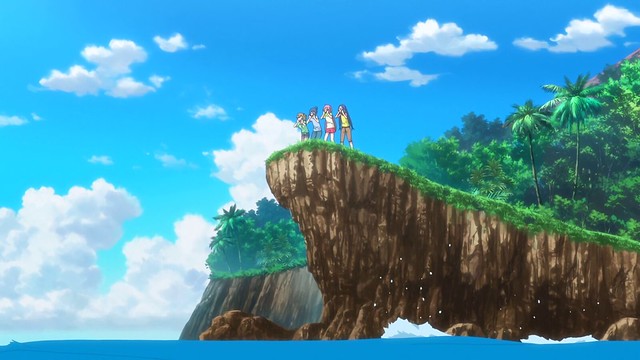 Survival Camp’s runtime, at twelve minutes, might be shorter than that of a standard episode, but nonetheless manages to fully occupy its runtime with the high-energy, adorable antics and adventures that Rin, Nadeshiko, Chiaki, Aoi and Ena find themselves in while on a tropical island. The premise of ditching a plane and landing on an tropical island within visual sight of Mount Fuji is a little whacky, and the OVA’s place in Yuru Camp△ proper is difficult to pinpoint, but none of these elements seem so relevant when audiences see the girls doing their best to survive in their own way, all the while making the most of the moment to have a good time. Yuru Camp△ has long been counted as one of the strongest anime of the Winter 2018 season, and while we’ve had two modestly enjoyable OVAs following a solid finish to the first season, the Survival Camp OVA demonstrates that Yuru Camp△ is a series whose characters and set up are versatile enough such that they can be applied to a variety of situations and settings. That Nadeshiko and the others’ time on the tropical island progresses with equal measure hilarity and adherence to what is realistic shows that the sky is the limit for what OVAs in Yuru Camp△ can be about. Of course, I do not anticipate that C-Station would have the rights to remake Survivorman and switch out Les Stroud for the likes of Nadeshiko, Rin, Chiako, Aoi and Ena, but the fact remains is that clever writing and resourceful use of camping as a premise has allowed for Yuru Camp△ to remain highly engaging. I greatly enjoyed the OVA, and strongly recommend it for everyone who has seen Yuru Camp△ and found it agreeable: given the strong sales of this series, and the fact that the manga is ongoing, a continuation seems very likely, but until then, OVAs such as Survival Camp will be a fine way of extending the fun from watching this series.