And That’s Why We Choose Our Irreplaceable Partners: Harukana Receive Finale Impressions and Whole-Series Review

“They push, we push. Every once in a while, we push hard enough that the light breaks through the clouds, and the world beyond the court glimmers.” —Battlefield 1 Prologue

With the match tied, Harukana and Éclair have a furious rally; Harukana pulls ahead in scoring and ultimately, Haruka blocks Claire’s spike, scoring the final point to win the match. Although Claire and Emily congratulate Haruka and Kanata on their victory, it is a bittersweet one. While Emily comforts Claire, who expresses no regrets in having trained Haruka and Kanata, Akari passes news of Haruka and Kanata’s win over to Narumi and Ayasa: they wish Kanata to be happy with their victory and look forwards to the possibility of facing one another in the Nationals. Later, the girls take some well-earned downtime, celebrating the aftermath of the Okinawa tournament with a barbeque on the beach. Narumi calls Haruka and thanks her for having helped Kanata rediscover her love for beach volleyball. After spending the afternoon enjoying the beaches of Okinawa, Emily, Kanata and Akari give Haruka and Claire some time alone, where Claire is able to be truthful about how she feels on the outcome of their match. She is surprised that Haruka was able to block their final spike, and Haruka feels that it was having trained with Claire and Emily that gave her the confidence to block spikes. Claire places her faith in Haruka and Kanata, to win for everyone’s sake. Emily and Kanata thank Akari, feeling that were it not for her presence in the beach volleyball club, they might not otherwise have an opportunity to remain close following that titanic match. When they return to Claire and Haruka with cold drinks in hand, the girls grow fired up and resolve to continue training together in preparation for the Valkyrie Cup. This brings Harukana Receive to an end for the present, and with all twelve episodes in the books, the time has come to look back through the entire series and ascertain what messages the anime intended for audiences to take away. Simple-minded discussions might claim that Harukana Receive is intended to be “intentional homoerotism…achieved through some subtext and an ambiguous comparison of the sporting partnership in the series with romantic relationship”, but the reality is that Harukana Receive has none of this; at the end of the day, it’s a story of friendship, discovery and learning.

Manga Time Kirara series are not known for being subtle about their themes of friendship and camaraderie. In the case of Harukana Receive, the message lies in the importance of supportive company as the motivator for progress and growth. Having lost her interest in beach volleyball from her short stature and other circumstances in her life, Kanata’s decision to leave the sport left an impact on those who looked up to her. Narumi was particularly disappointed, as the two had been partners previously, and similarly, Claire and Emily were left facing an opponent who was a shadow of her former self. When Haruka arrives, with her boundless energy and optimism, Kanata’s desire to support Haruka slowly brings her back into beach volleyball. With a partner who views the world as a place to explore and try one’s strength in, Kanata redevelops her passion for beach volleyball. This resurgence draws the attention of her old friends and rivals, and as she embraces beach volleyball again, Kanata also forms a much closer relationship with her cousin. These changes show the extent that good support can have on one’s well-being, and for Kanata, there is no one better than Haruka to brighten her day up. Similarly, when Claire and Emily are set to face off against Haruka and Kanata, the pairs set their friendship aside to face one another as opponents. Emotions run high during their match, and in its aftermath, the atmosphere is subdued, quite unlike what a victory would feel like. Haruka and Kanata may have won, but there was a price to pay. The toll extracted, however, would have been much heavier had Akari not been present. Rooting for everyone and promising that everyone’s friendship will remain intact no matter the outcome, Akari’s presence grounds both pairs and keeps them from losing sight of what is truly important: the memories and experiences they have all shared together. Because she is not in a pair, Akari brings to the beach volleyball club a new perspective on things, and this is precisely what allows Claire, Haruka, Emily and Kanata to remain on excellent terms with one another.

Placing Claire and Emily as the final opponents for Haruka and Kanata to overcome before Kanata can push ahead and keep her promise with Narumi also serves one important function: throughout Harukana Receive, Kanata’s desire to keep her promise to Narumi is a sometimes-burden, sometimes-motivator. Kanata is evidently someone who holds true to her word and expresses visible regret when she feels as though she might not be able to uphold her end of the promise. When the opportunity for keeping it presents itself, Kanata seizes it; she and Haruka make remarkable progress as a pair over the course of a year, reaching a point where they are able to play on par with the second-ranked players in all of Japan. The power of a promise as a motivator is clearly felt, and ends up being a powerful driving force for Kanata. When faced with the ultimate test of her will, Kanata shows that she is willing to do all that is necessary to keep her word, even if it means vanquishing her friends in competition. This level of determination underlies several interesting facets of Kanata’s character: besides staying true to her word, Kanata is also evidently someone who treasures those around her. Narumi might be paired with Ayasa now, but she still desires to uphold their promise to one another as friends. In an age where one’s word is often worth as little as the air it took to make it, such faithfulness to one’s promises is admirable. As Kanata discovers, there are many ways to keep one’s promises and make the most of the moment; in accepting this, Kanata is above to rediscover her old self and live in the present, finding new happiness with Haruka, Claire, Emily and Akari. 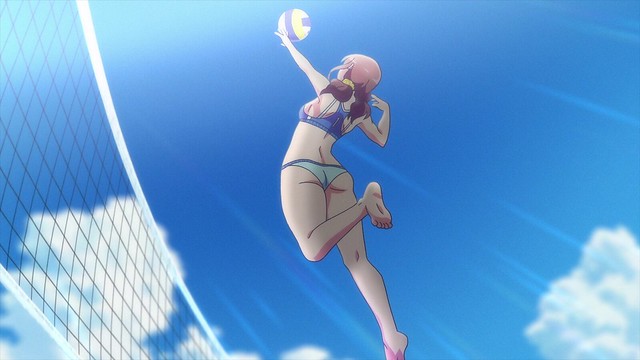 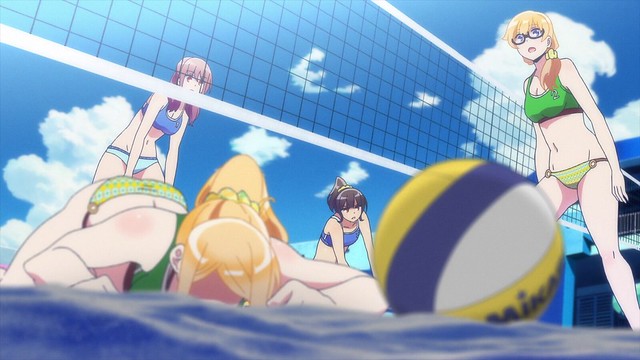 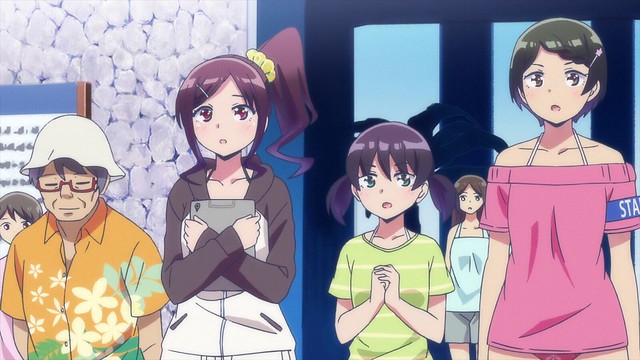 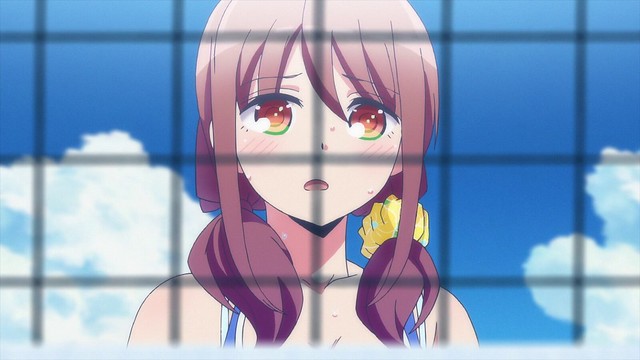 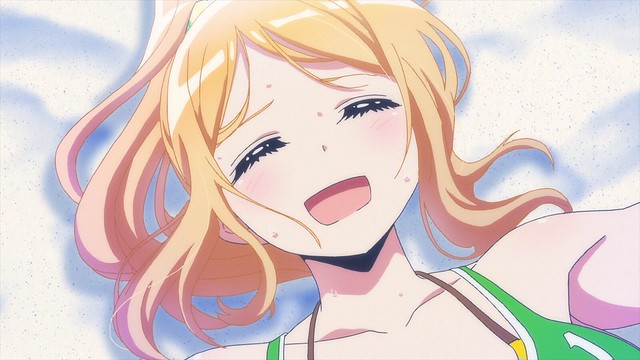 “Victory costs. Every time, you pay a little more” 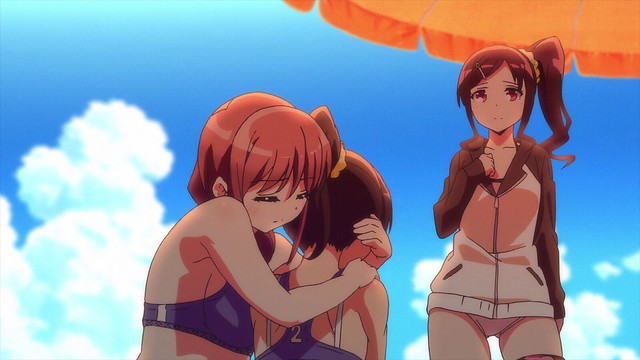 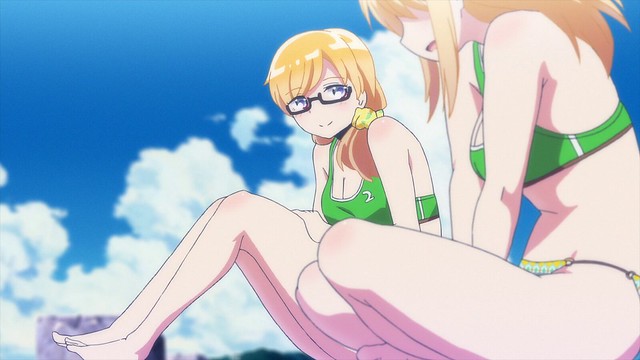 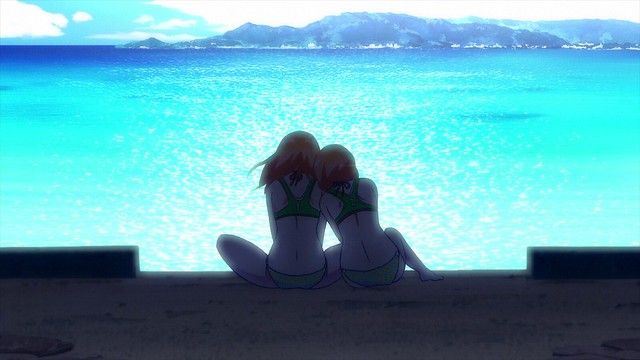 “Does anyone have any orange slices?” —Scott Lang, Captain America: Civil War 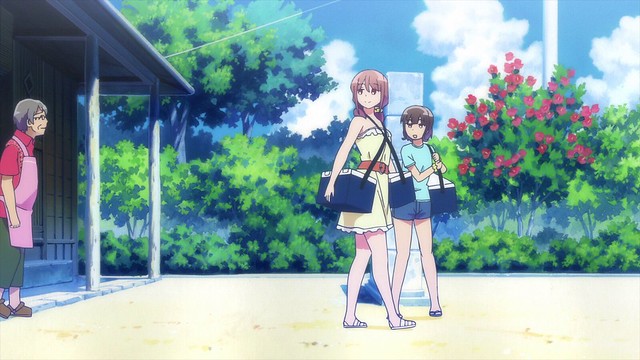 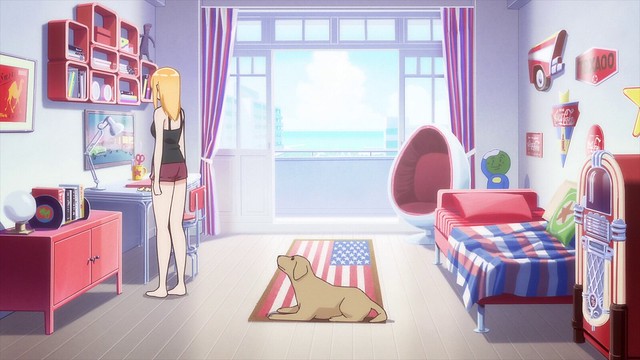 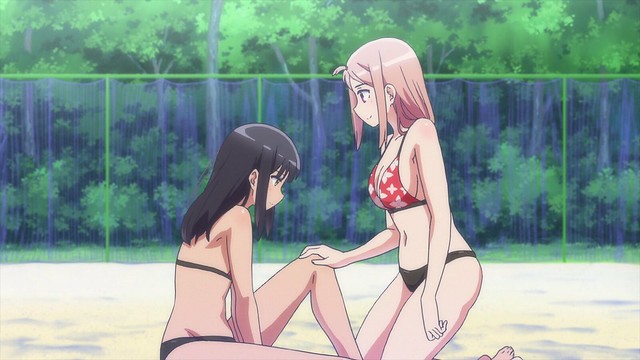 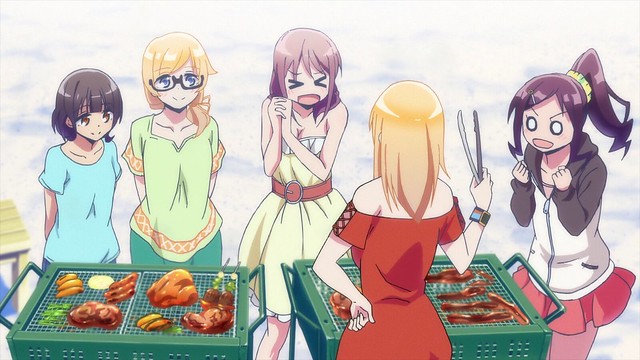 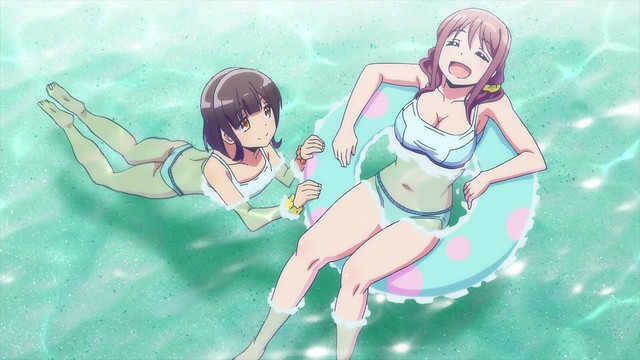 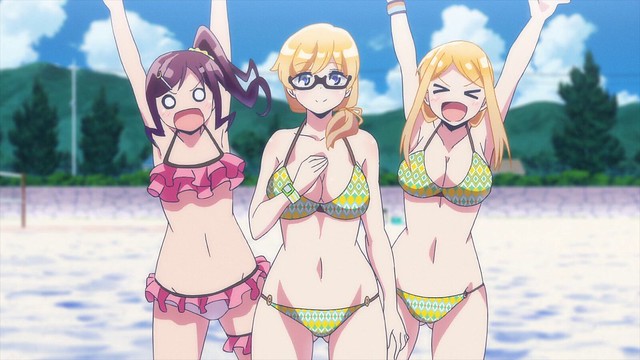 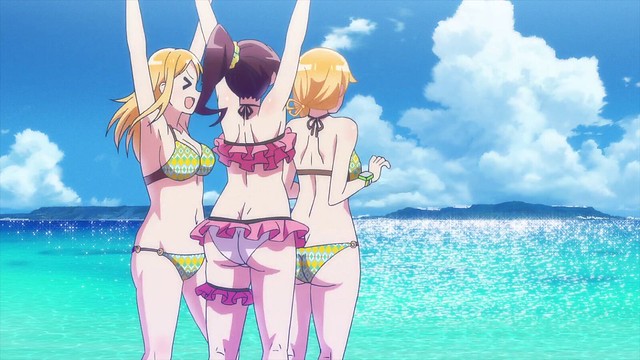 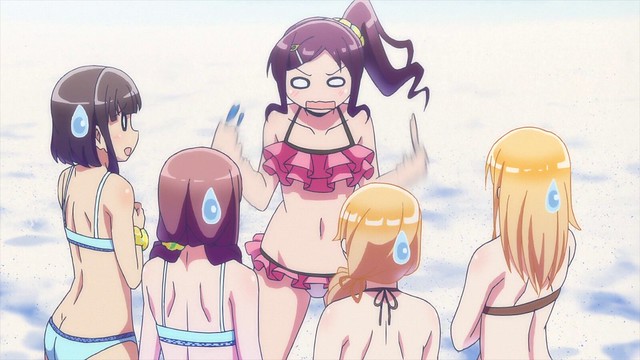 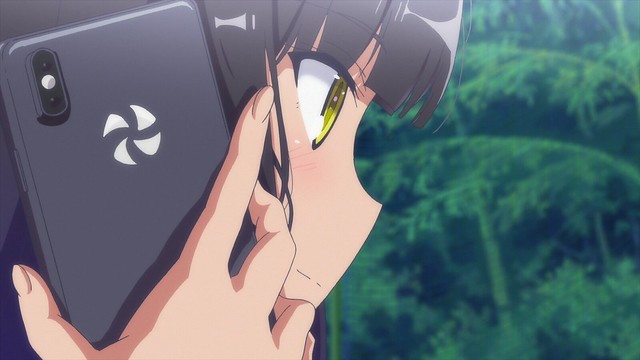 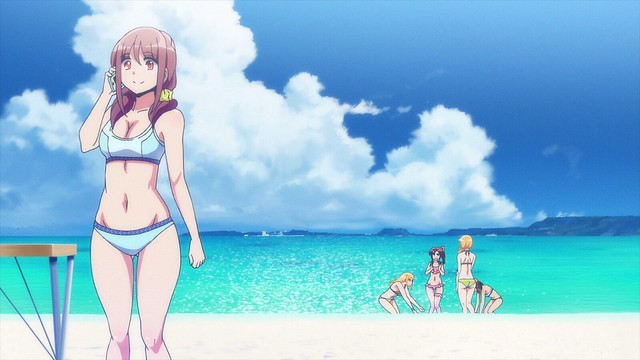 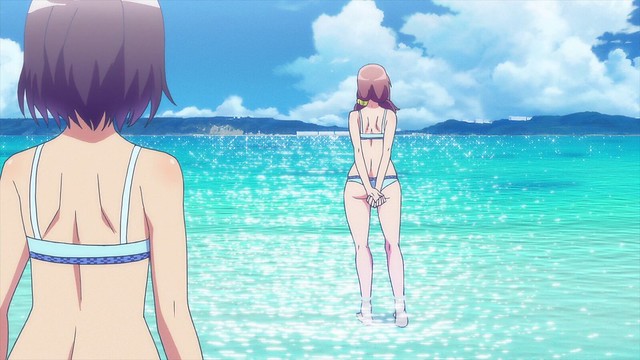 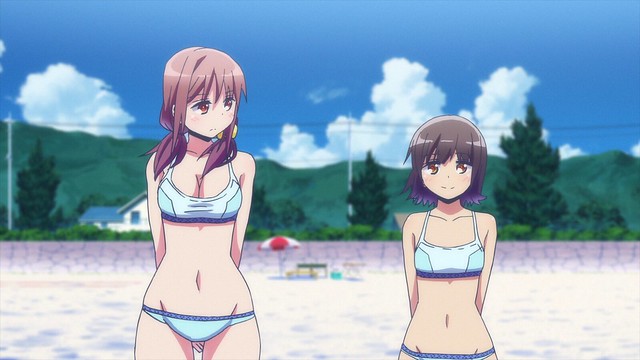 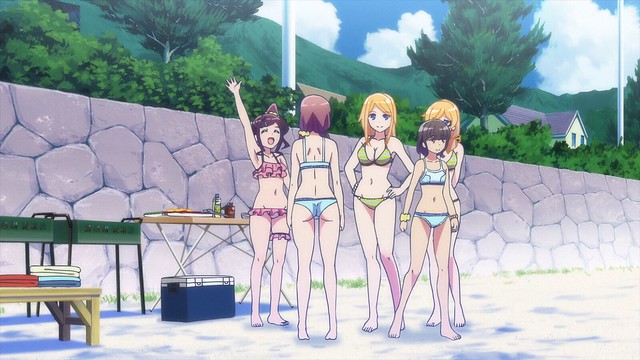 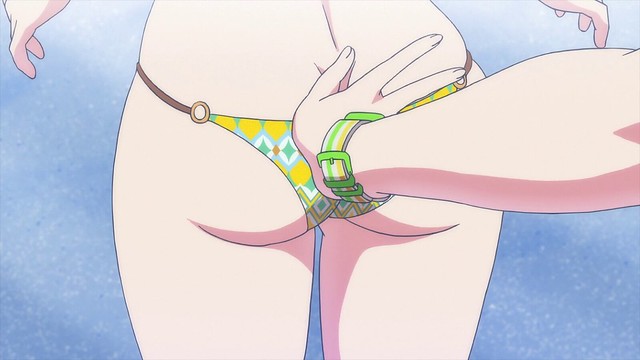 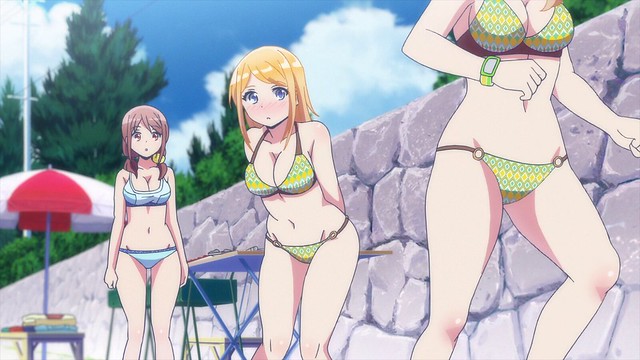 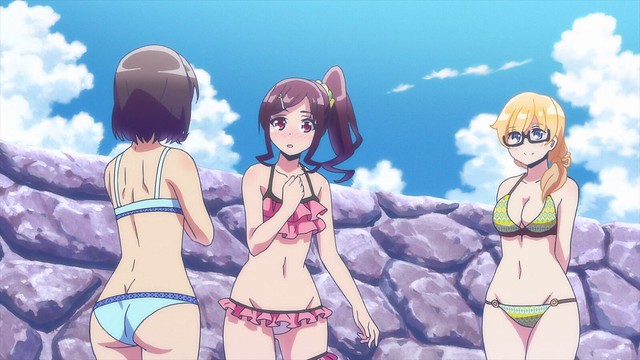 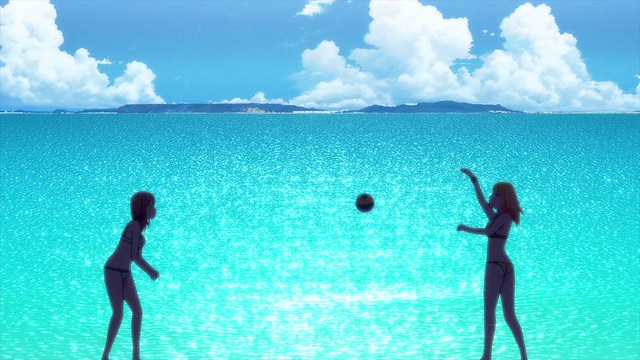 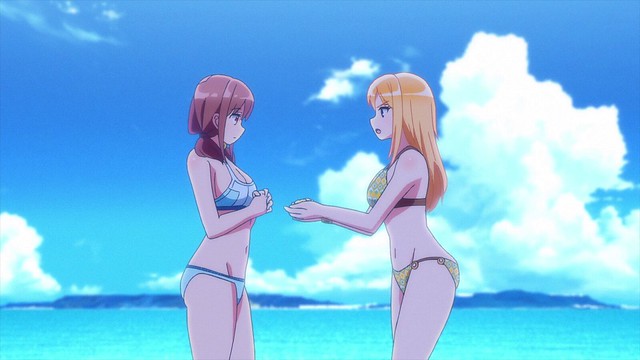 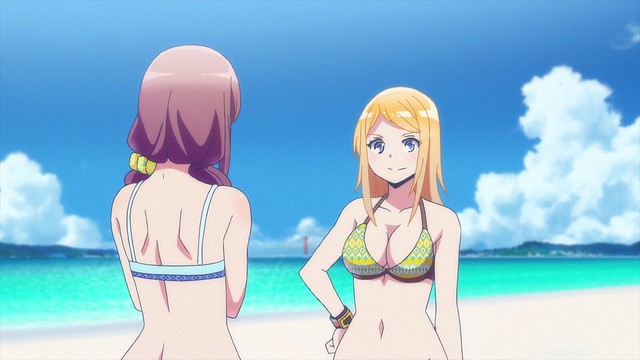 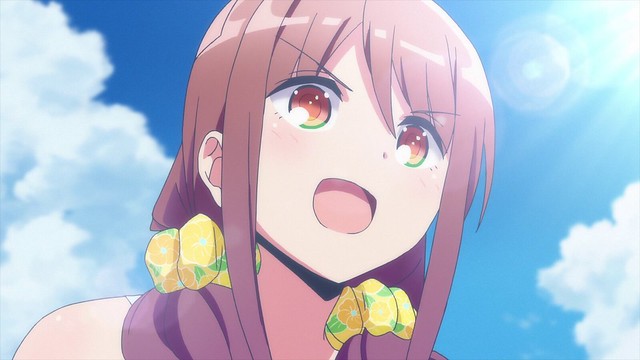 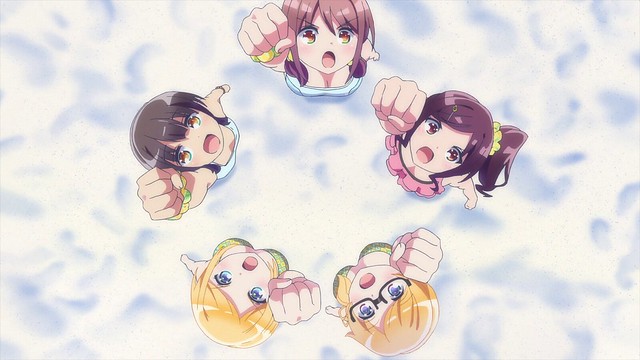 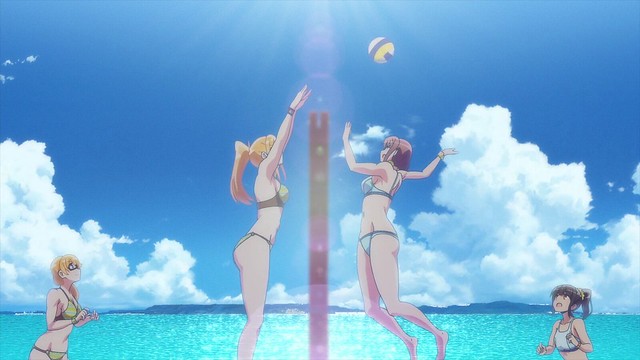 Harukana Receive deals with relevant matters on having supportive peers and how this can help one approach their problems in creative, novel manners; it is far from being an empty exercise in female anatomy. During its twelve episode run, Harukana Receive depicts pivotal moments in Kanata’s journey of rediscovery and regaining what was lost. Beach volleyball is an integral part of Harukana Receive, as are the more ordinary moments spent off the court. Because of the focus placed on these moments, as well as the presence of humour, Harukana Receive reminds its audience that life is not about the high-intensity moments. Everyday moments in Harukana Receive are present to humanise the characters, showing that events away from beach volleyball also have a tangible impact on the girls’ journey. Similarly, comedy, in visual and verbal form, lightens moments up and balances a situation out such that when characters encounter problems, they overcome them together. Harukana Receive never gave the impression as being that of a serious anime about beach volleyball, and the interspersion of humour, some of which occasionally takes the form of gentle teasing and flirting, is strictly present to this end. Striking this balance is why Harukana Receive is able to tell a compelling story that relaxes and captivates well when it means to. The serious moments hold weight because audiences have come to see the girls as human, with their own unique attributes and flaws, while the light-hearted moments relax and show that Haruka and the others are ordinary people with stories worth following. For this, I would give Harukana Receive a recommendation: the fanservice and occasional unfaithfulness to reality are eclipsed by the things that Harukana Receive gets correct. As such, unless one had a particularly strong aversions to watching young women playing beach volleyball, Harukana Receive is an enjoyable watch and a pleasant surprise. The source manga is still running, and with Harukana setting their sights on a National tournament, it is pretty clear that the foundations are laid for a continuation. Should sales be strong, one could reasonably expect a second season to materialise, and it would be most welcoming to see what lies ahead for Haruka and Kanata in the future.