Walking Towards the Future, Discovering the Past: Revisiting Youhei and Misae’s Arcs in CLANNAD ~After Story~ At The Ten Year Anniversary

2 Comments Posted by infinitezenith on November 7, 2018

“Do not lose to the obstacles that you will meet in the future.” –Tomoya Okazaki

When Mei decides to stick around after Youhei shows no sign of having a concrete course of action following high school, Youhei attempts to find someone to pose as his girlfriend so Mei will stop worrying about him. He is unsuccessful until Sanae decides to help out, presenting herself as Nagisa’s sister. Sanae’s gentle and reliable demeanour causes Mei to continue worrying, and she reveals to Tomoya that the Youhei she remembers was once dependable and caring of those around her. She attempts to go out with Tomoya to draw old Youhei’s old nature, although Youhei seemingly remains unmoved. Youhei begins to withdraw from the others, and Tomoya learns that Youhei was once a soccer player who quit after hazing from more senior players. Mei wishes for Youhei to rejoin and agrees to pick up stray soccer balls as a result, but finds herself bullied by the soccer team. Youhei and Tomoya begin fighting the soccer team, causing their members to disperse. Emotions boil over – Youhei and Tomoya slug it out, stopping when Mei and Nagisa intervene. In the aftermath, Tomoya and Youhei, upon seeing their respective battered visages, recall how they’d first met and share a good laugh. Youhei is terrified to learn that Sanae is actually Nagisa’s mother, and flees from a violent Akio. Mei returns home, while Tomoya and Nagisa continue to spend time with Youhei. Autumn sets in, and with it, the Autumn Festival: while speaking with Misae, Tomoya dozes off. He learns that Misae met an unusual boy, Katsuki Shima, in her final year of high school. Despite being annoyed by his presence initially, Misae comes to spend more time with him after her heart is broken upon learning her crush has a girlfriend already. With his earnest attitude, Misae begins falling in love with him and invites him to the autumn festival. However, Katsuki learnt earlier that his existence is owed to the original Katsuki’s wish to be with Misae. On the night of the festival, Misae admits that she’s in love with Katsuki, and he dissolves into tears, knowing he won’t be able to fulfil his promise to her. Tomoya awakens, and attends the autumn festival. They run into Misae here, and Tomoya recounts Katsuki’s story to Misae, who realises that Katsuki is still with her after all this time.

By pushing Tomoya into considering his friends’ future and the pasts of those senior to him, ~After Story~ provides audiences with greater insight into the directions that Tomoya must take as time passes. In having him resort to putting on a façade to drive Youhei forwards, and eventually physically fighting him, Tomoya shows that while he prefers indirect action to motivate people, he is not afraid to get his hands dirty and be direct. A real friend is someone who is open and honest, even when what they say is not pleasant to listen to. A real friend similarly can listen to this and come away stronger for it. Thus, when Tomoya encourages Youhei to find focus in his future, the resulting fight and resolution does eventually have an impact on Youhei. In the immediate future, Youhei remains the source of comic relief, but subtle changes can be seen, as well. Besides the future, the past is also explored: listening to Katsuki’s story and recounting things to Misae shows that Tomoya is perceptive. He sees commonalities between the lessons and experiences of his seniors, and those of his own experiences. In this case, Tomoya understands what falling in love is like and the strength of these feelings, as well as what can happen when these feelings go unacknowledged. Acting on what he feels is right, Tomoya is able to help Misae attain closure when he learns Misae’s cat is actually Katsuki; in doing so, Tomoya also shows that he is aware of Kyou and Tomoyo’s feelings for him to some extent, further illustrating that despite his appearances, Tomoya is a complex, multi-dimensional character whose experiences, especially with Nagisa, have begin bringing back the side of him that genuinely represents his personality and beliefs. While seemingly unrelated to the main events in ~After Story~, Youhei and Misae’s stories serve to give Tomoya a chance to interact in a context where romance is not a possible outcome. His experiences in both show that regardless of who it is at the receiving end, Tomoya is ready to listen or fight his way to a solution. 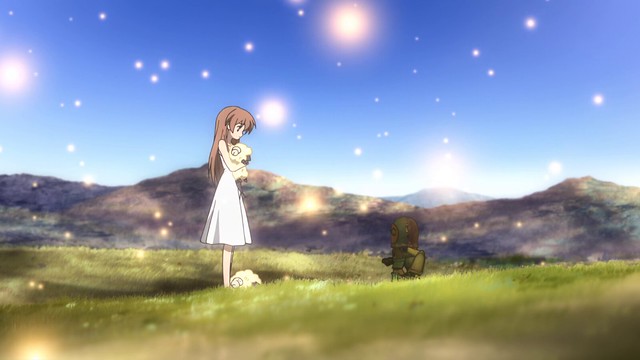 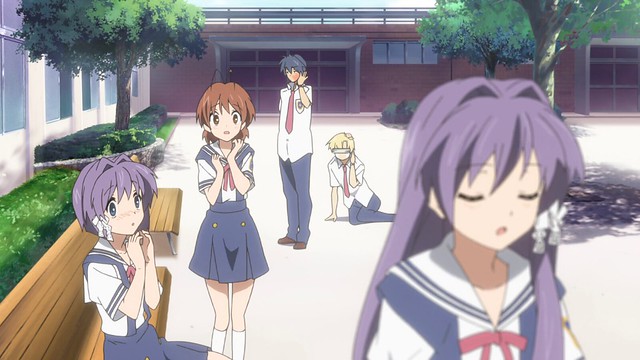 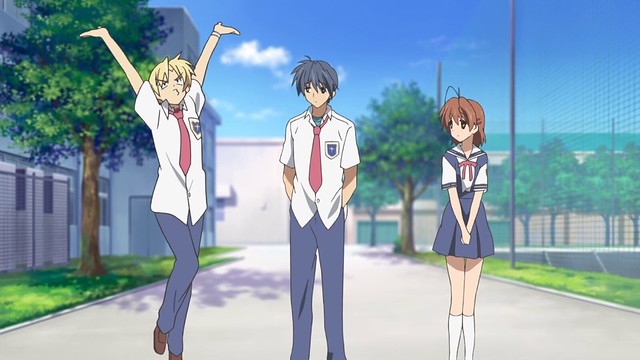 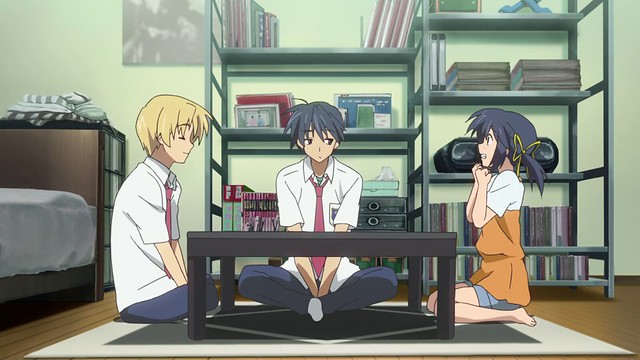 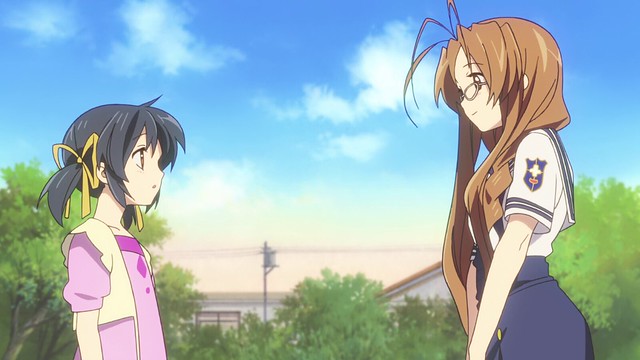 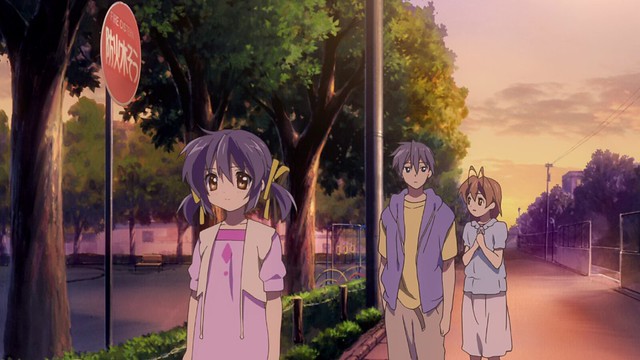 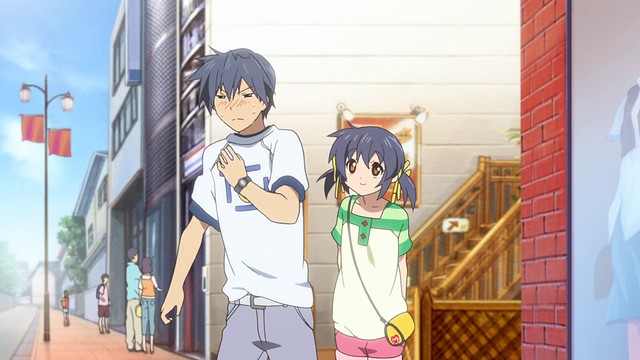 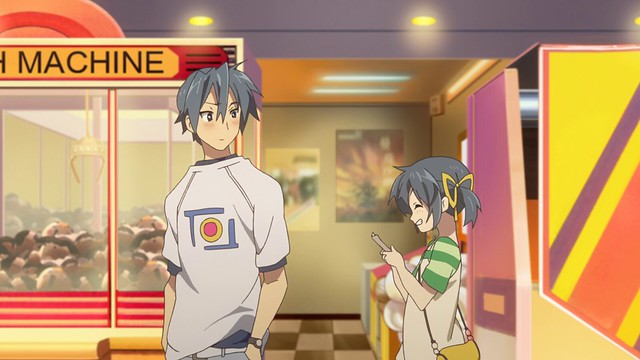 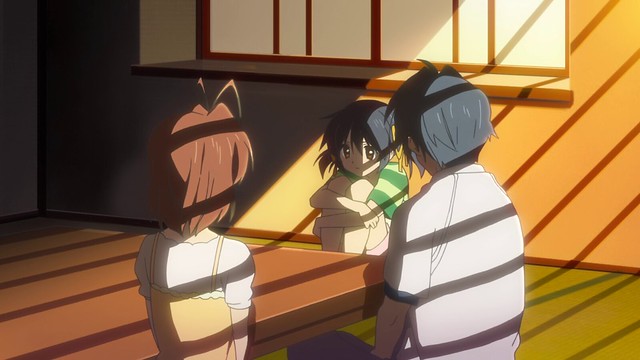 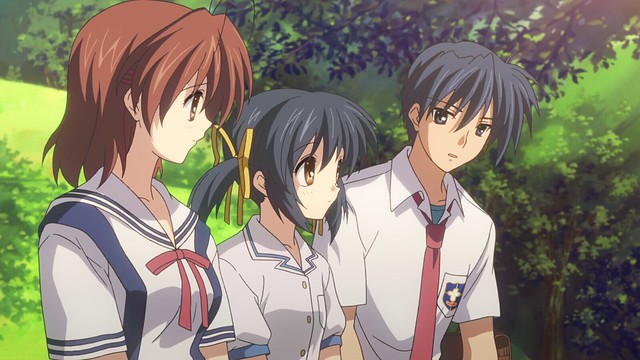 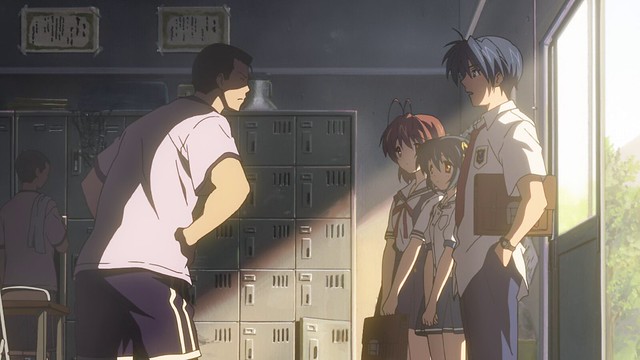 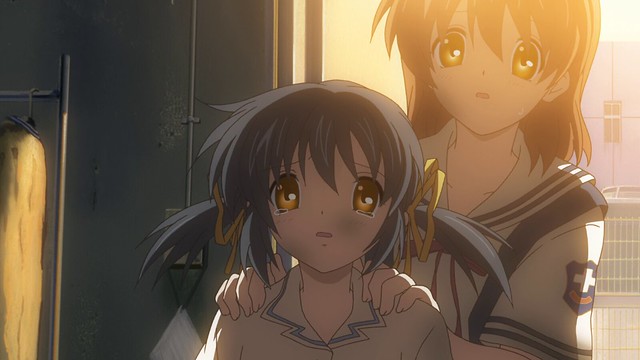 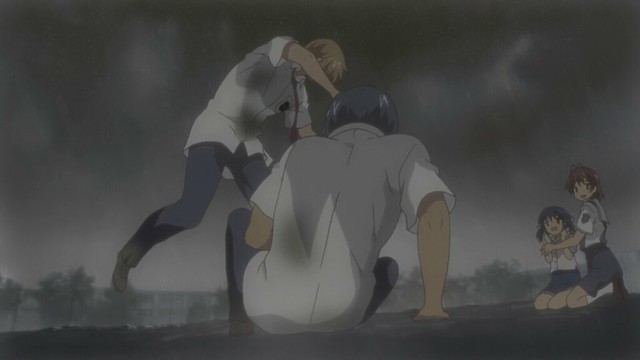 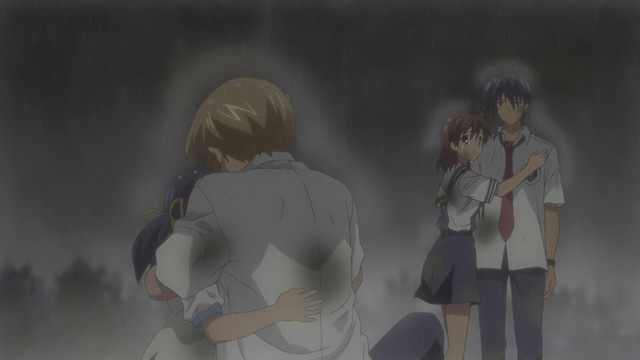 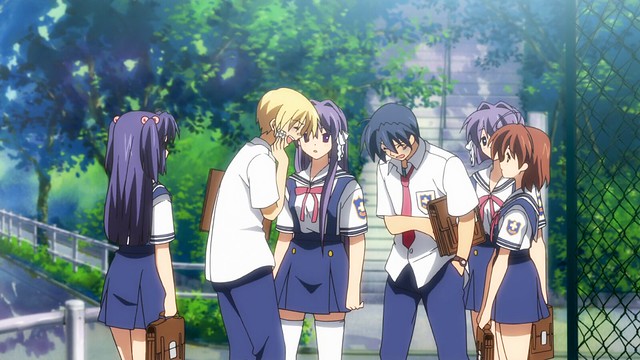 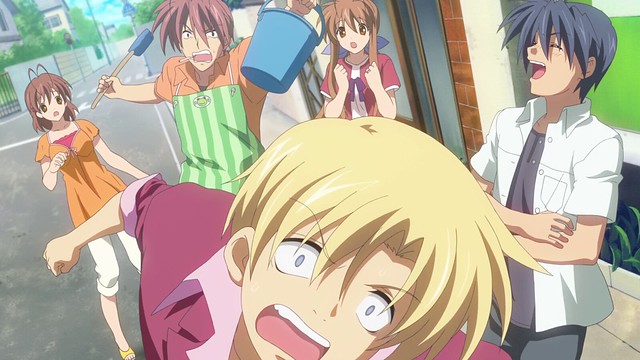 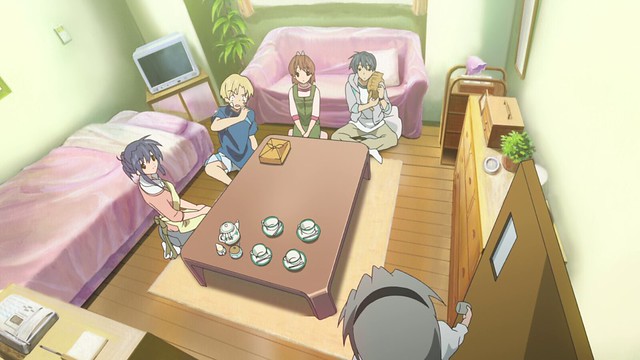 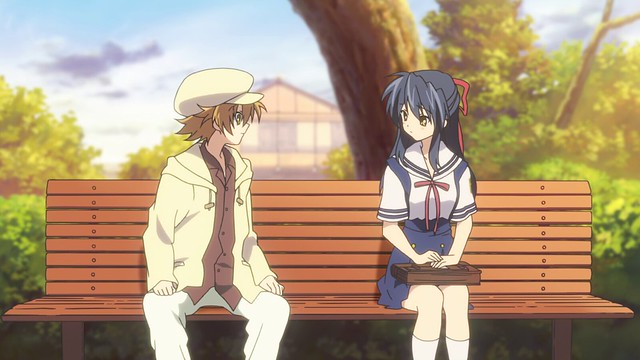 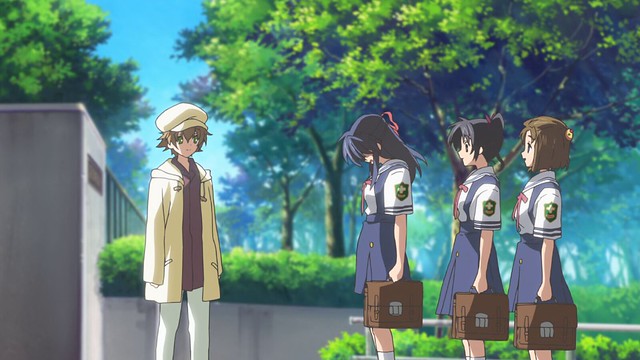 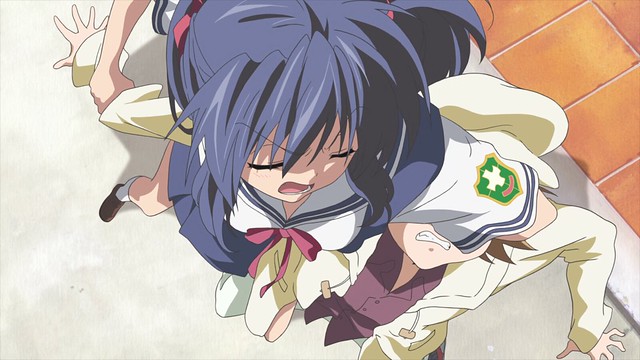 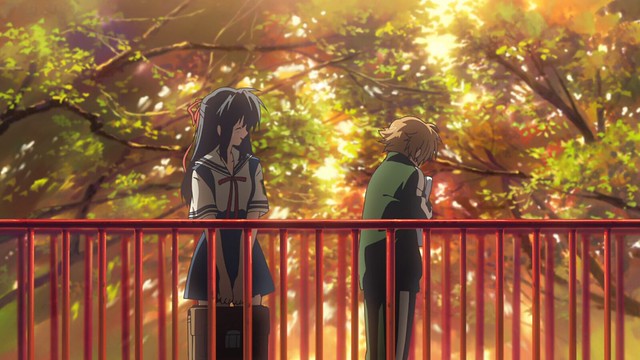 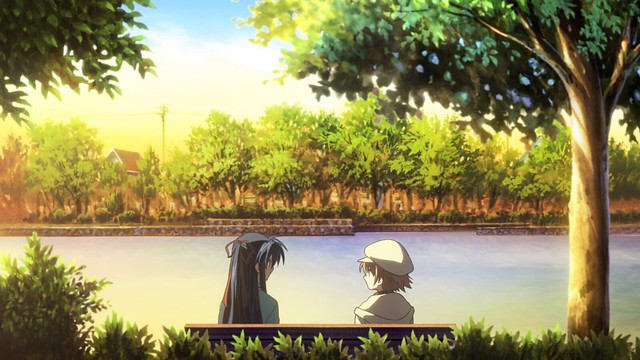 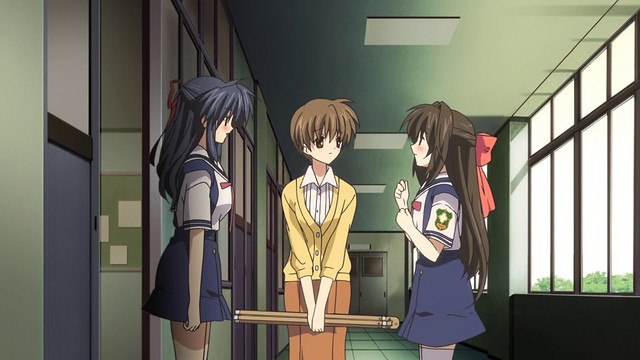 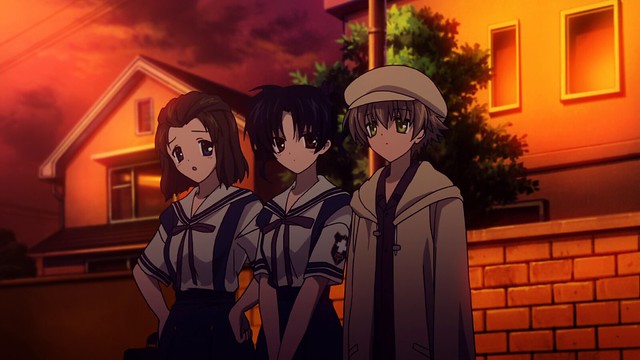 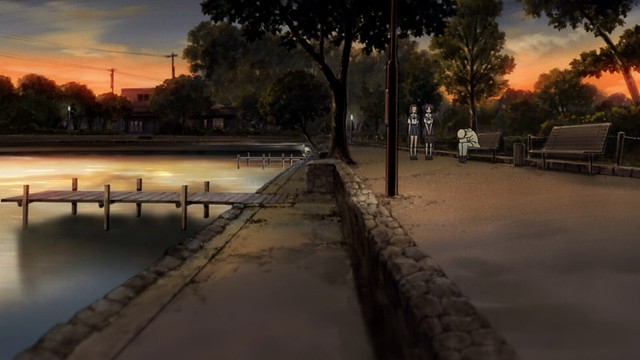 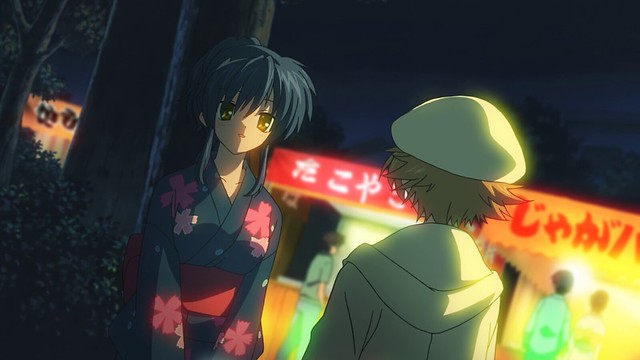 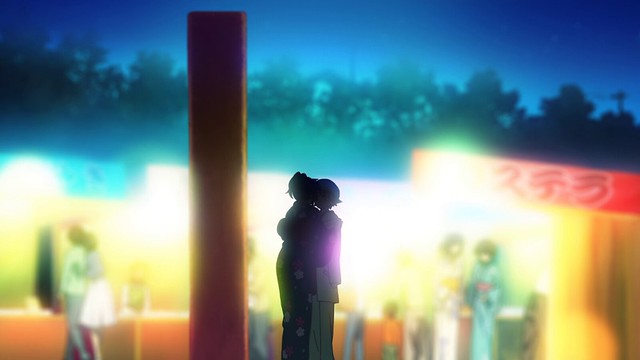 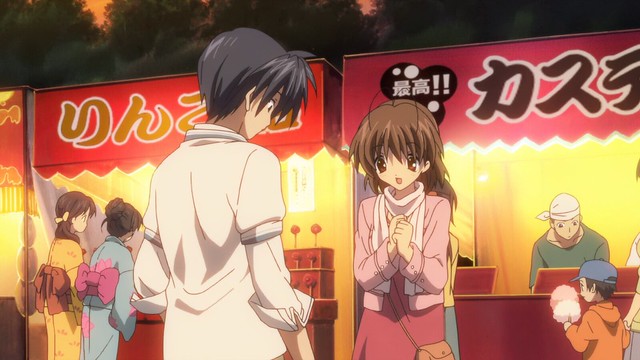 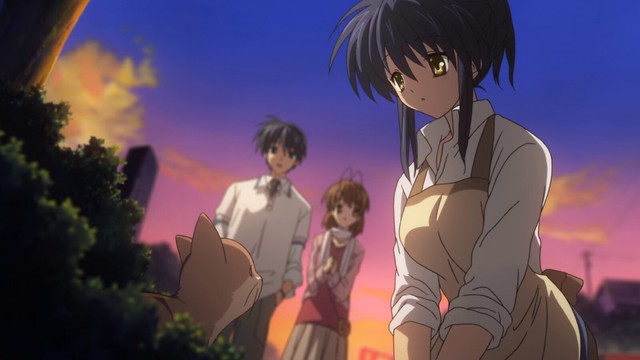 Besides building out Tomoya’s character further, ~After Story~ capitalises on its earlier episodes to further develop the other characters and the universe to build a truly well-thought out, captivating world. From a narrative perspective, having Tomoya deal with Youhei and reigniting Youhei’s motivation shows the strength of their friendship. Audiences now understand why Youhei and Tomoya remain friends in spite of Youhei’s flippant attitude and Tomoya’s penchant for pranking Youhei: their friendship holds weight after what audiences have seen, and we thus come to appreciate that in spite of the comedic, even idiotic interactions between the two, the reality is that Tomoya and Youhei do support one another when the moment calls for it. Similarly, exploring Misae’s story and introducing an element reminiscent of Makoto’s arc in Kanon reinforce that there is a supernatural component in CLANNAD. While the supernatural had always been subtly present in CLANNAD (and in Fuuki’s arc, not-so-subtle), that it is making a more noticeable appearance now means that there are forces at work in CLANNAD that should not be so quickly dismissed. The sum of these two stories in ~After Story~ thus act to set the expectation that every story Tomoya experiences have weight, and that it is the sum of his actions, in conjunction with the supernatural aspects of his world, that will come to impact and shape his future.

2 responses to “Walking Towards the Future, Discovering the Past: Revisiting Youhei and Misae’s Arcs in CLANNAD ~After Story~ At The Ten Year Anniversary”