Beginnings and Promises on that Sloped Road: Revisiting The Road to Graduation in CLANNAD ~After Story~ At The Ten Year Anniversary

4 Comments Posted by infinitezenith on December 19, 2018

“Life can bring lots of hardships, but it’s always important to keep in mind that there are people around you who care for you, and are willing to help you through whatever you’re dealing with.” –Nagisa Furukawa

After helping Yukine resolve a long-standing feud with gangs in town, graduation for Tomoya and the others near. Kyou aspires to be a kindergarten teacher, while Ryou decides to become a nurse. Kotomi plans on studying abroad, and Youhei aims to be a model. However, Tomoya is uncertain about his future. When Nagisa falls ill during Christmas Eve, he spends time with her. After graduation, Tomoya takes a job with the Furukawa bakery, and Nagisa returns to school. He moves out into an apartment with Nagisa, and accepts a new job as an electrician. Determined to prove his worth, Tomoya works diligently with Yusuke, who promises to withhold that Tomoya has a shoulder injury. While Tomoya earns the respect of his coworkers with his effort, he also begins to spend less time with Nagisa, missing most of the day at the school’s Founder’s Festival. One day, while working with Yusuke, Tomoya learns from him that he was once a songwriter who descended into depression. He returned home and encountered Kouko again, regretting giving up his dreams of singing for her. Back in the present, Tomoya has been presented with a new job offer, but this is rescinded when Tomoya’s father is arrested. Tomoya is consumed with frustration that his past is inescapable, but Nagisa intervenes and calms him down. In the aftermath, Tomoya proposes to Nagisa under a hot summer’s day, who accepts. From his final days in high school to the transition point where he becomes a full-fledged member of society, Tomoya’s journey has been a tumultuous one. His kind heart dominates his apathy, and spurred on by friends, Tomoya’s closes off one chapter of his life, moving onwards in the world ahead. However, as he learns, the real world is not forgiving; lacking any direction, Tomoya initially decides to regroup and occupy his time by working at the Furukawa bakery, keeping himself from idling. Despite not having a clear plan for the future, Tomoya has always been skillful at making the most of things. Keeping busy while he works out a plan, Tomoya eventually becomes an electrician and finds it a job he enjoys.

However, in taking up a new job, Tomoya is faced with the task of proving his worth, and so, struggles to find his work-life balance. This becomes evident when he begins dozing off during dinner, and later, misses his promise to be with Nagisa at the Founder’s Festival. Spending time with loved ones is a vital part of life, and of late, work-life balance has been discussed more widely, since working too diligently has been attributed with a decrease in performance at one’s job. There is another cost in one’s personal relationships; working more means spending less time with the important people in one’s life, and this is evidently has taken a toll on Tomoya, whose time with Nagisa has been decreasing. In the real world, this can be a point of contention amongst couples, and the couples that are similar to Tomoya and Nagisa, who are willing to accept one another and work things out, are usually those that end up sharing their futures together; Nagisa is very understanding of Tomoya and does her best to accommodate him. By presenting Nagisa as patient and accepting, ~After Story~ makes it clear that Nagisa is the person for Tomoya, being a gentle and compassionate foil to his energy and determination, constantly looking out for him even when things become difficult. After learning his offer to work at a larger company was rescinded because his father was arrested, Tomoya’s reaction is a forceful one, and Nagisa’s actions here, to physically stop Tomoya from injuring himself, show that she’s willing to do what it takes for Tomoya’s interest. Realising that Nagisa has gone to these lengths for him, Tomoya decides here to propose to her. While the moment is not likely to be counted as the most romantic proposal of all time, it’s certainly moving and fitting for the challenges the two have survived thus far. 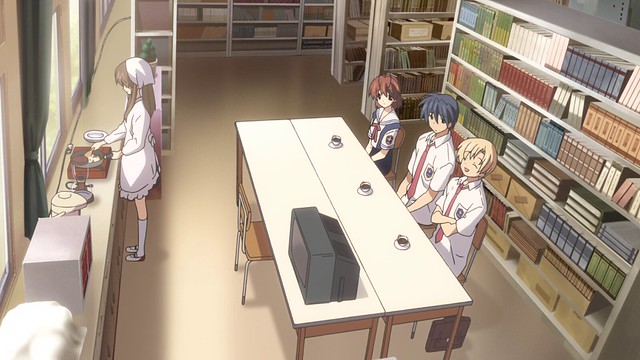 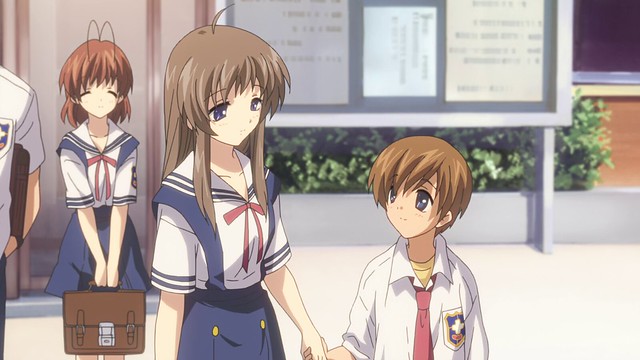 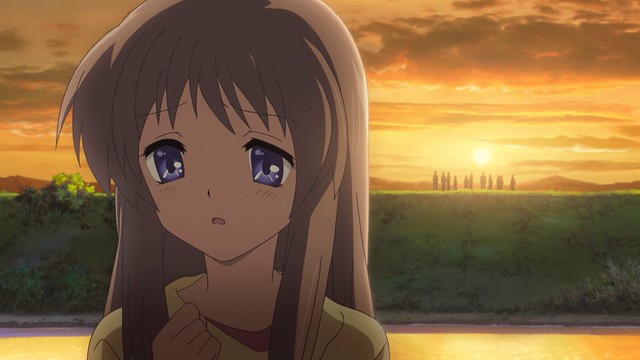 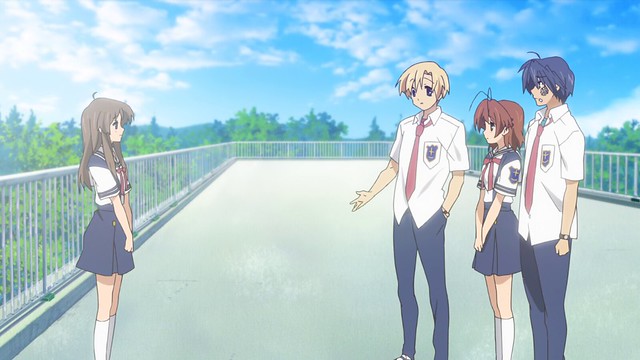 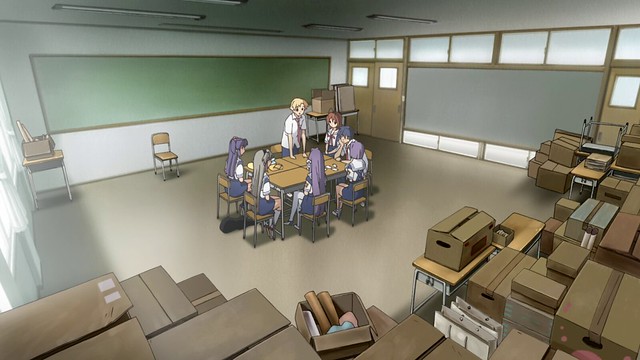 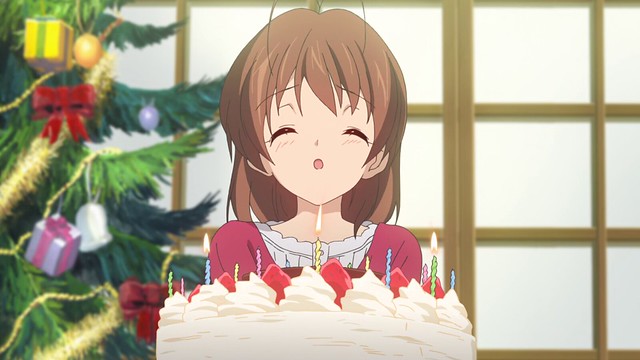 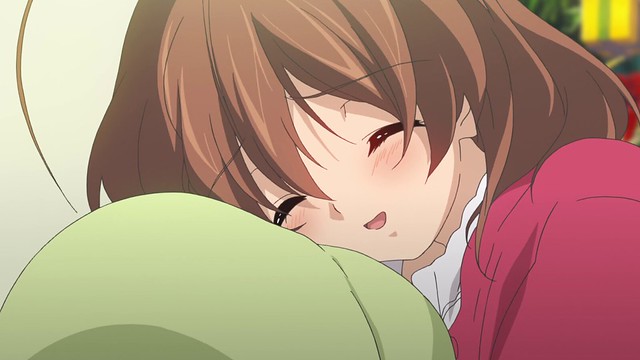 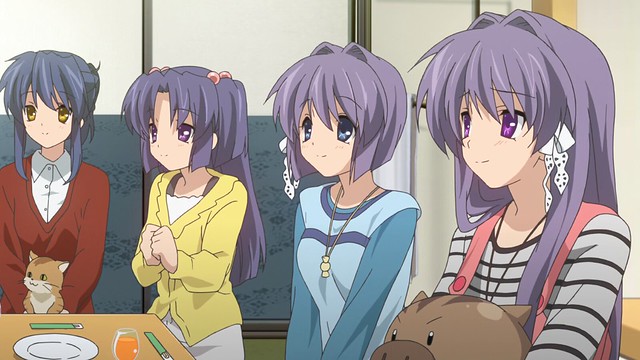 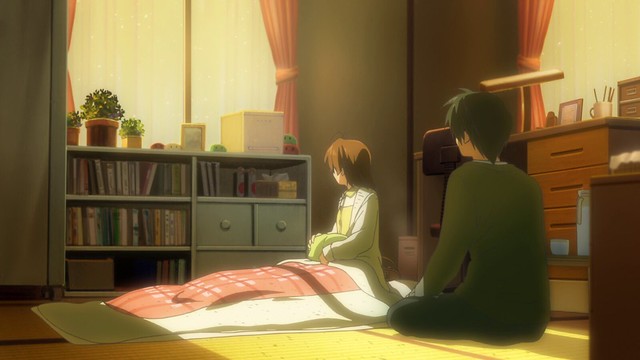 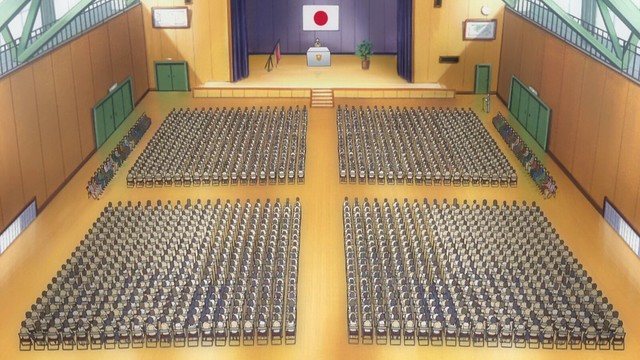 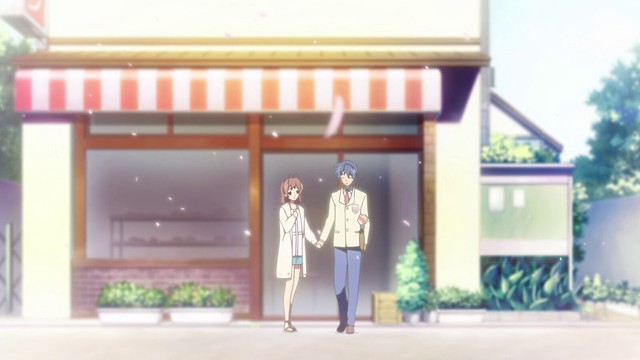 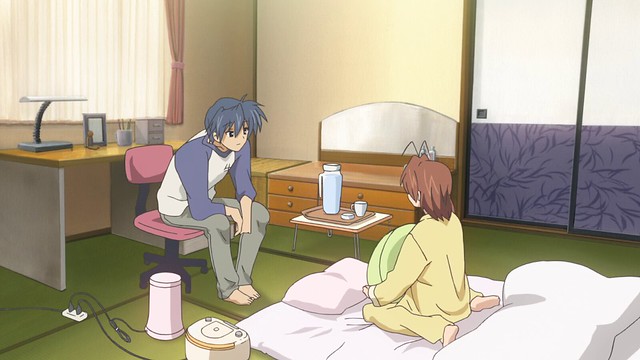 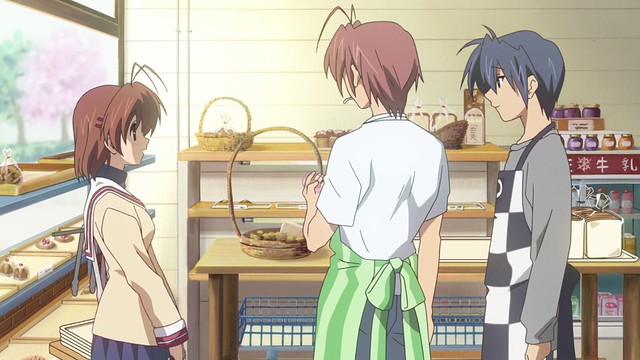 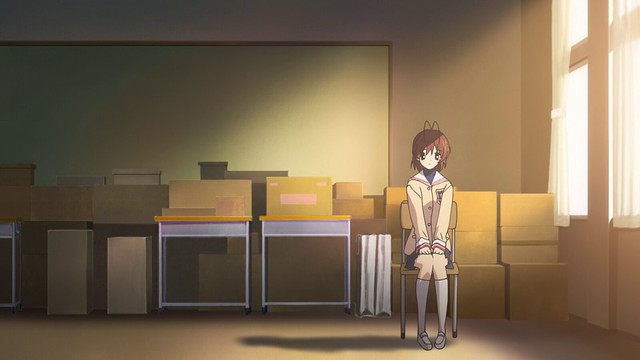 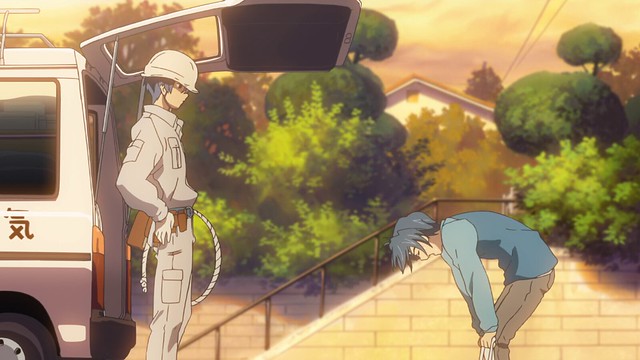 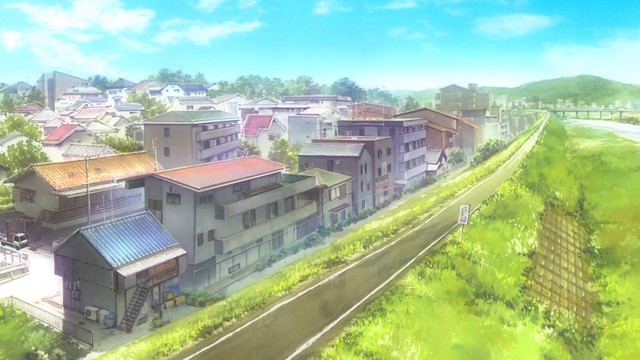 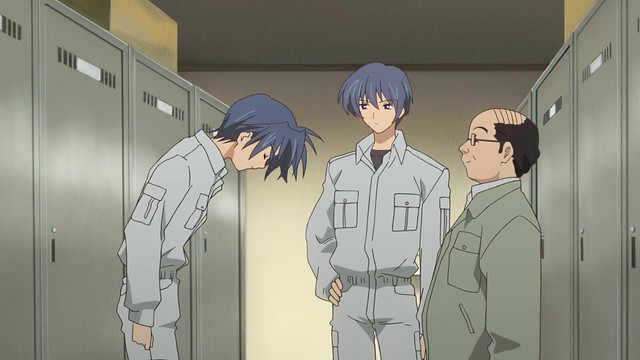 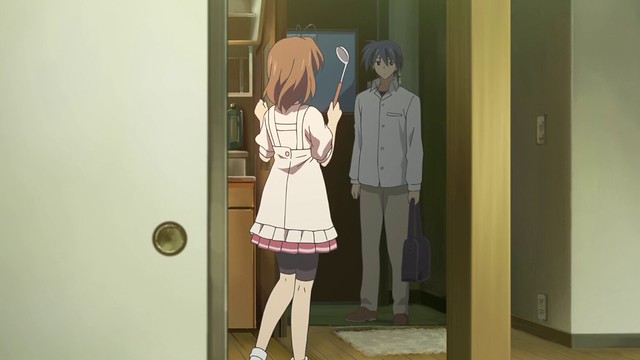 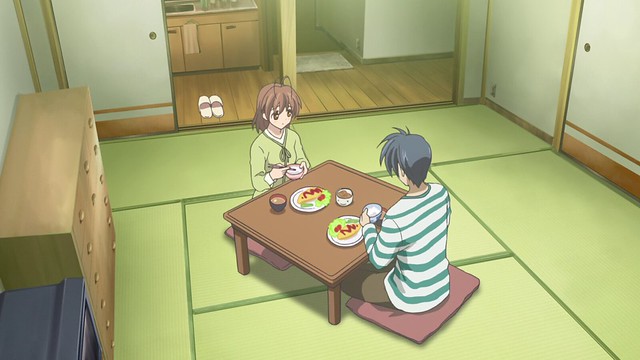 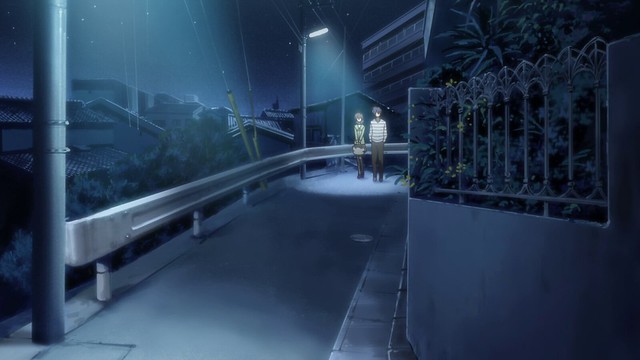 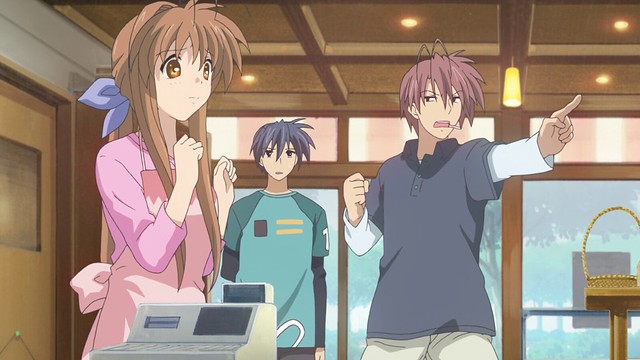 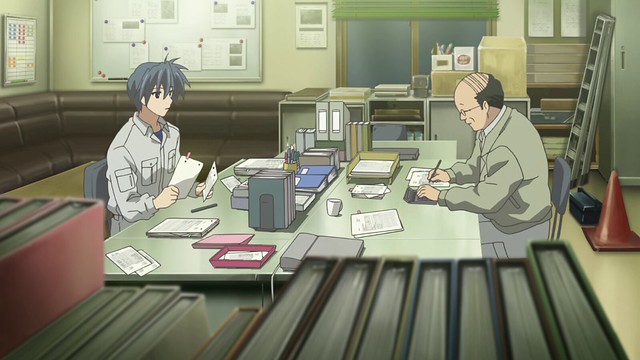 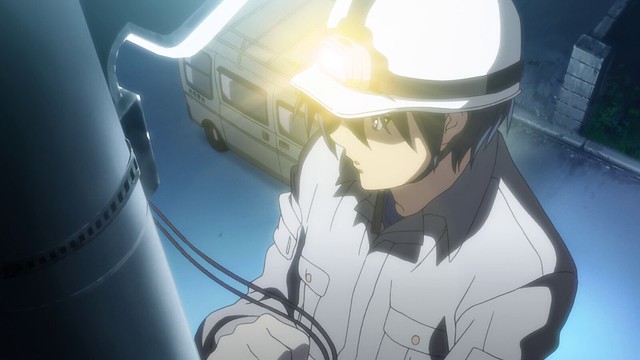 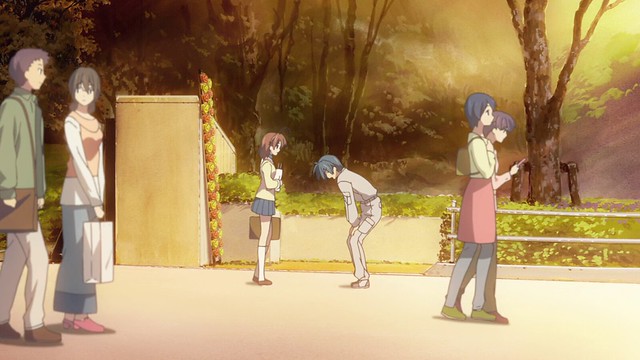 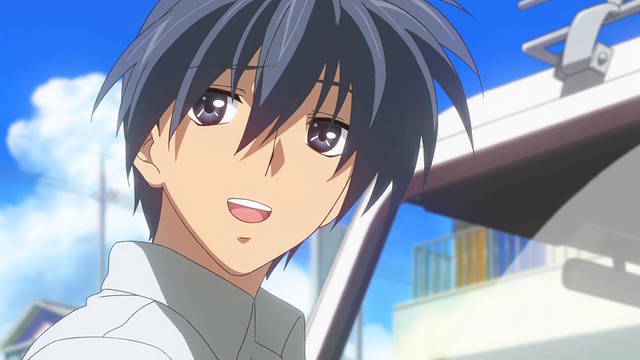 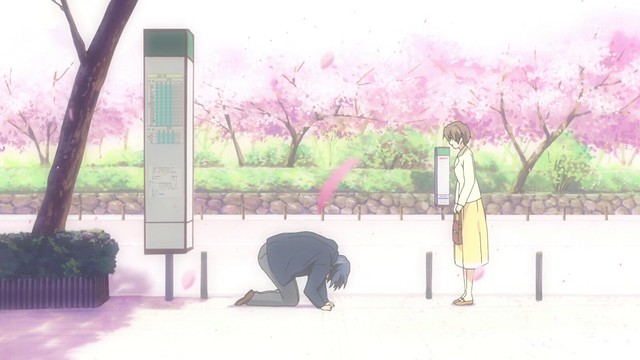 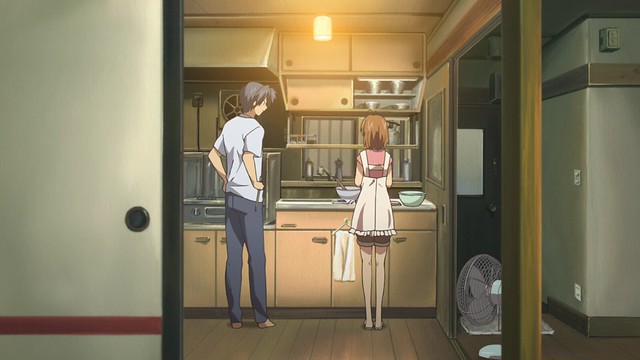 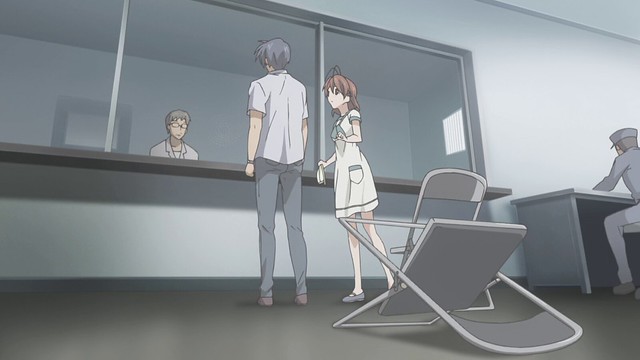 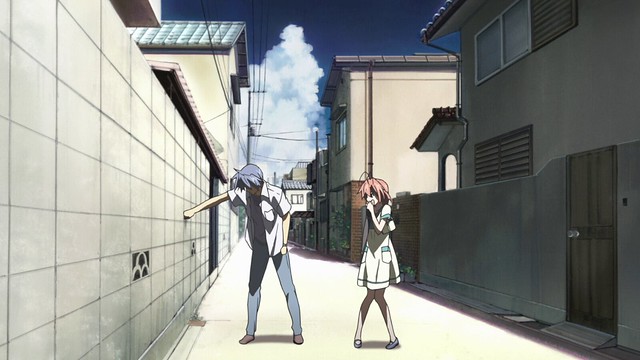 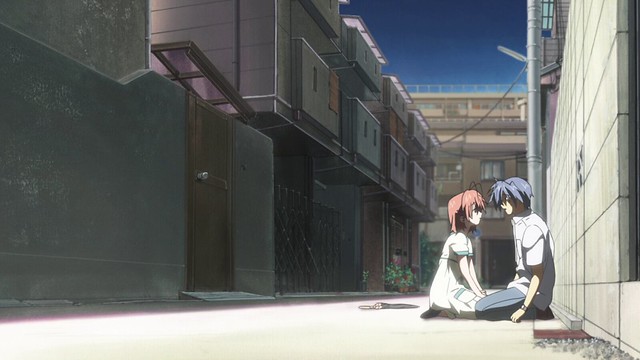 It is here in ~After Story~ that the narrative takes a shift from high school to that of adulthood, of a world marked with responsibility and challenges. Immediately relatable is Tomoya’s resolve to keep active even while working out what he wishes to do with his future, and then the struggle Tomoya encounters in finding work-life balance during the early days of his work. By stepping out of school and into the real world, ~After Story~ ventures into a new direction that shows just how uncertain and uncomfortable being an adult is. However, for these difficulties, adulthood also comes with its own joys, as well. Effort in one’s career is rewarded, and people come to appreciate one another’s company even more strongly. In its portrayal of Tomoya and Nagisa, ~After Story~ means to suggest that, far more than romantic gestures and activities associated with relationships, the endgame of the most meaningful relationships is that one finds a partner to stay by their side, acting as a source of support and confidant, while simultaneously, also be someone that one can support and confide in. No matter how difficult things get, knowing that there will be someone reliably in one’s corner is a major boost to one’s morale, and ~After Story~ shows that with the right partner, almost any seemingly-insurmountable problem can be addressed. Seeing all of these things progress, from that day where Nagisa and Tomoya first met, to the present, creates incredibly human characters that audiences empathise and connect with. As they mature, Tomoya and Nagisa seem more life-like, prompting viewers begin to invest more into their story and hope for their happiness as they face the future together. This is what compelled players to continue with CLANNAD‘s visual novel, and why so many became engrossed with CLANNAD‘s animated adaptation.

4 responses to “Beginnings and Promises on that Sloped Road: Revisiting The Road to Graduation in CLANNAD ~After Story~ At The Ten Year Anniversary”