A New Family’s Beginning in the Summer, Departure by a Cruel Winter’s Storm: Revisiting Tomoya and Nagisa’s Marriage in CLANNAD ~After Story~ At The Ten Year Anniversary

“Of course I’ll stay with you. No matter what happens, forever and ever.” –Nagisa Furukawa

Akio refuses to discuss with Tomoya the latter’s intent to marry Nagisa; he stipulates that Tomoya must hit a baseball in a manner that Akio finds satisfactory before he will even consider speaking with Tomoya, and so, Tomoya determinedly practises his hits. Nailing one after lengthy practise, he implores for Akio to accept his marriage to Nagisa. Nagisa graduates shortly after; in the company of her friends, she receives her diploma and marries Tomoya, taking a job as a waitress at a local family restaurant. Tomoya and Akio visit Nagisa while she is working, and fend off some customers accosting her. Later, Nagisa learns that she is pregnant and develops morning sickness, requiring that she take bedrest. Their friends visit, and Sanae hires a midwife to help deliver their child when Nagisa expresses a wish to give birth at home. Because of Nagisa’s frailty, there’s a risk that she may not make it, but both Tomoya and Nagisa decide to go ahead with the birth. Tomoya learns from Akio that after that one day where Nagisa lost consciousness while waiting in the snow for him and Sanae to return home, he carried her to a meadow and begged the gods to spare her. Akio recounts this story to reiterate the value of family and how he and Sanae will support Tomoya and Nagisa. Nagisa and Tomoya decide to name their child Ushio. By winter, Nagisa goes into labour during a fierce blizzard; conditions preclude taking Nagisa to a hospital, and so, she gives birth to Ushio at home. The combined pressure on her body from childbirth and her illness results in her death, devastating Tomoya and ending his dream of raising Ushio with Nagisa. From the highest highs to the lowest low, this arc in ~After Story~ is a difficult one to watch. Having gone through so much, this couple reaches a point where they can make a new start, raising a child and pushing on into the future, but at the last second, this is cruelly taken from Tomoya, who is now made to endure new challenges.

Weather and lighting, having long played a major role in earlier stories within CLANNAD, now come out in full force in ~After Story~. It is no surprise that the symbolism of the different seasons is utilised to its fullest effects to convey emotional tenour as Tomoya and Nagisa’s marriage occurs. In spring, shortly after Nagisa graduate, she and Tomoya marry. Spring is a season characterised by new beginnings and renewal: vegetation and animal life begin returning into a warming world as days lengthen. Having finally reached one milestone in her life, Nagisa is quite ready to walk a new road with Tomoya, and their marriage in the spring reinforces that something new has bloomed. This is a time of hope and optimism, to step into the future and make the most of things. Life is at its apex in the summer, when days are longest and the weather is hot. Lengthy days fill people with energy and vigour, instilling a sense of adventure. It is here that Nagisa announces that she is pregnant; a new child represents this adventure, as raising a child is a completely new journey for couples. Filled with spirit and vitality, the summer is a time of exploration and excitement, which is mirrored in the joy Tomoya and Nagisa experience when they begin preparing to welcome their child into the world. Positive imagery abounds in the early stages of Tomoya and Nagisa’s marriage: colours are vivid, and the mood light as the characters bounce off one another. However, winter sets in. With its greys and whites, winter is bleak, a time of cold and darkness. It is here that Nagisa perishes while giving birth to Ushio, unable to access medical facilities because a blizzard has rendered dangerous travelling on roads. The winter contributes to Nagisa’s death, and it becomes very clear that ~After Story~ regards winter in a negative light – winter isn’t just an ending to light and warmth or about dormancy, it is the embodiment of death and suffering, of loss and uncertainty. 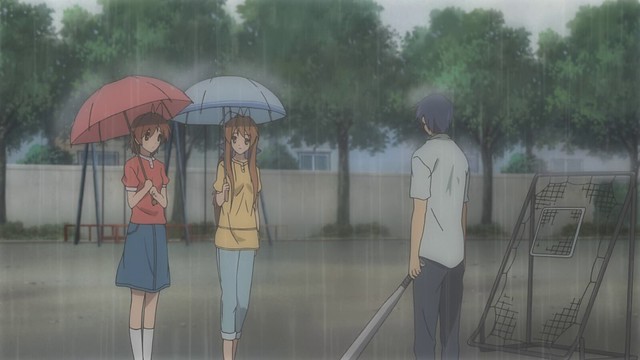 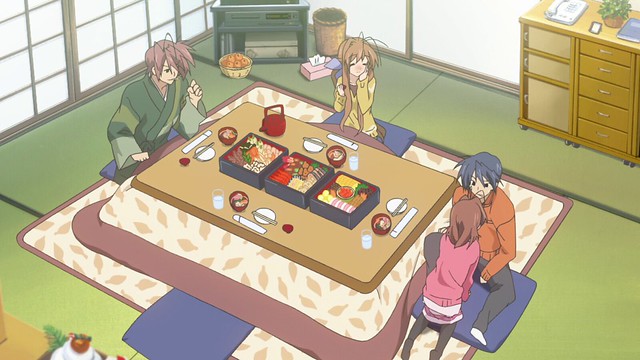 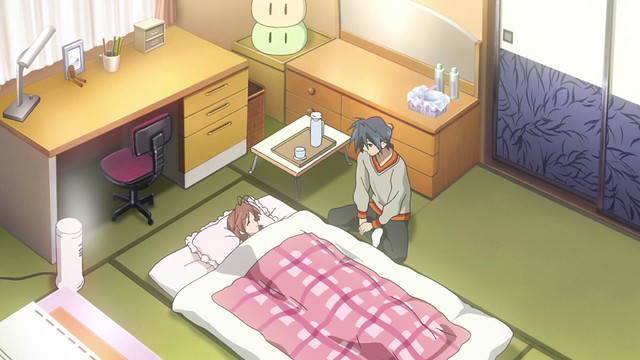 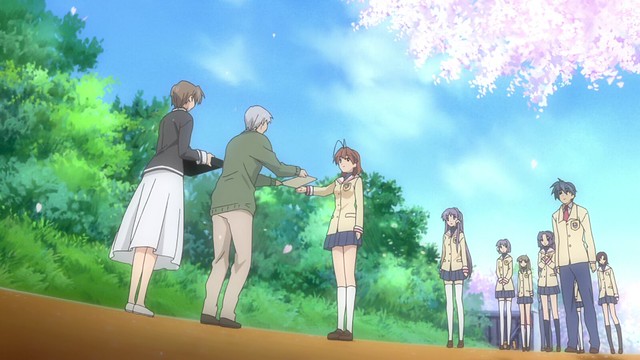 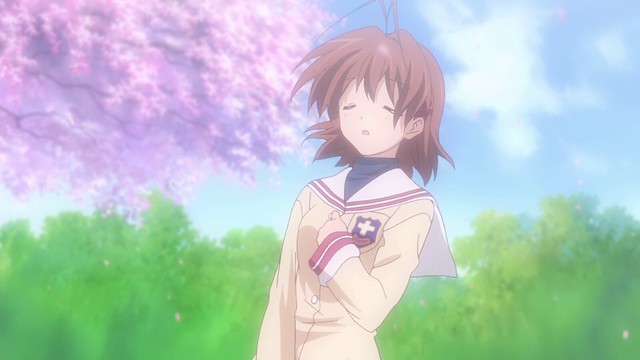 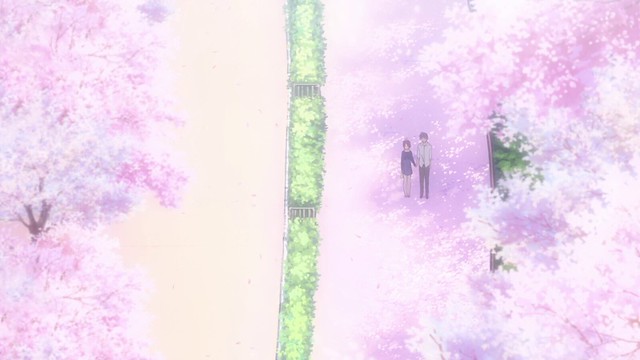 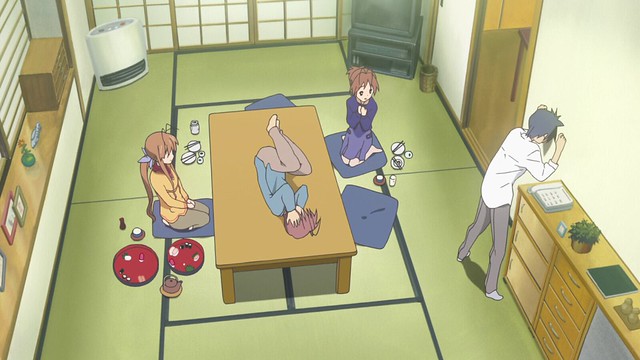 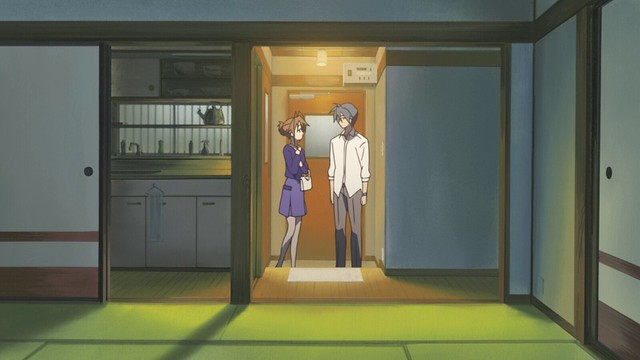 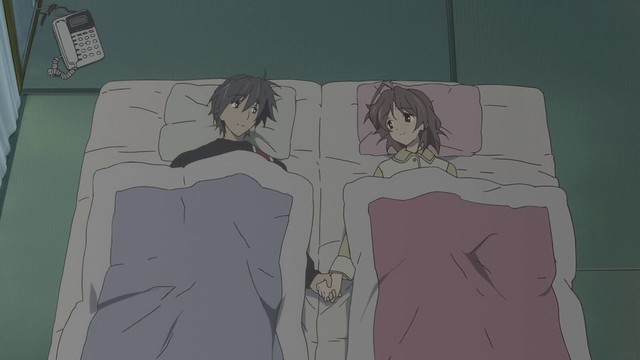 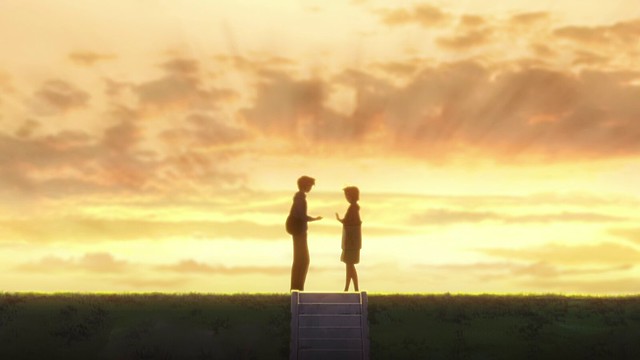 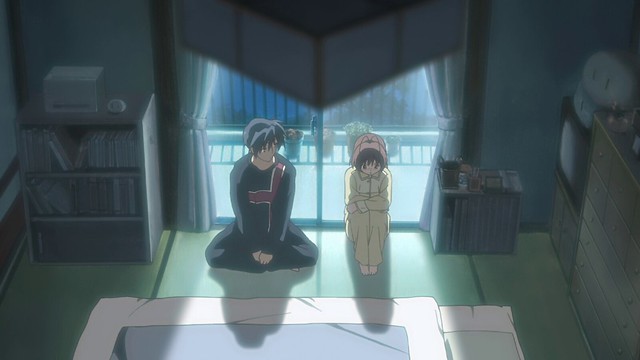 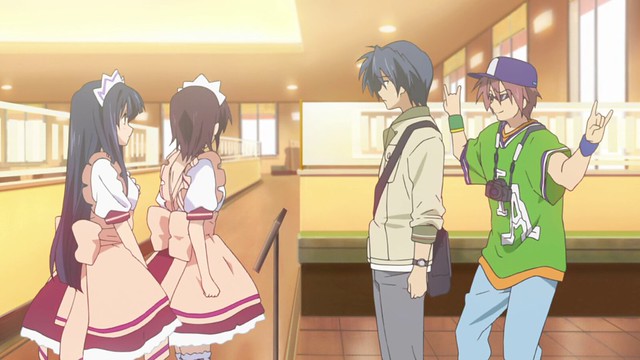 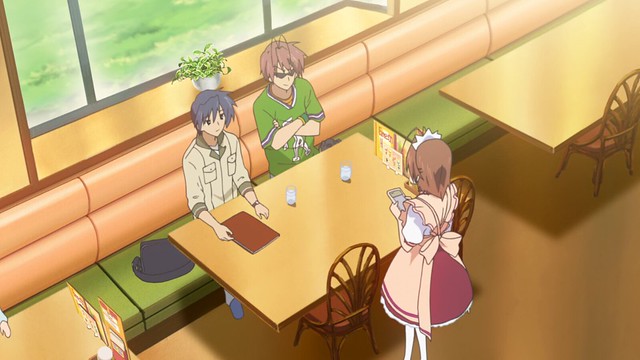 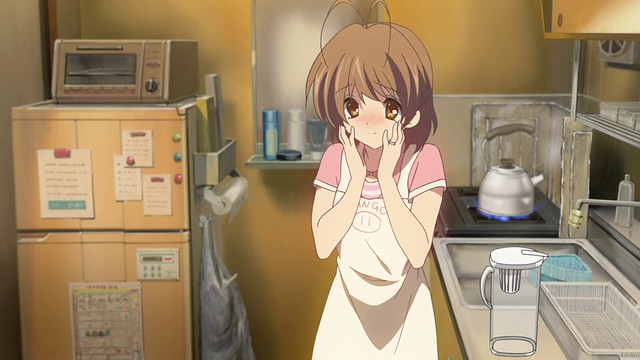 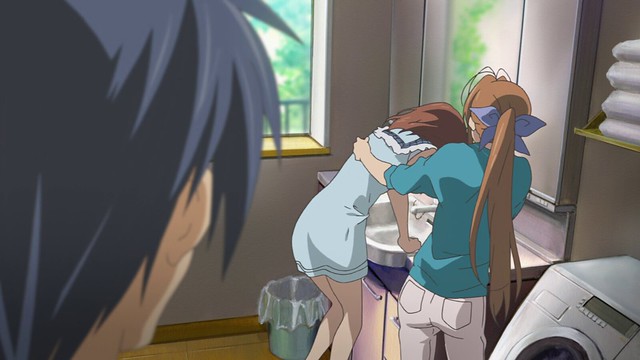 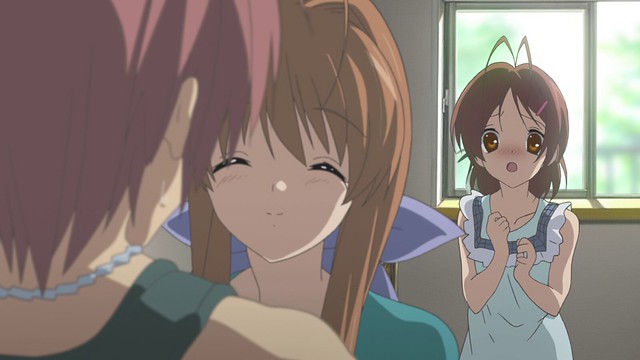 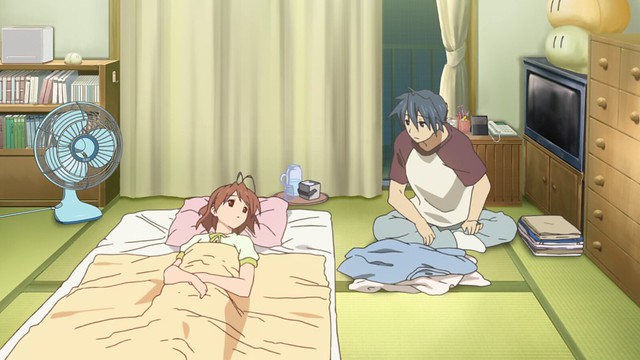 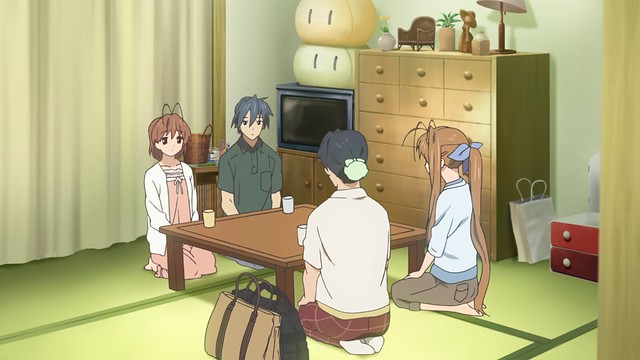 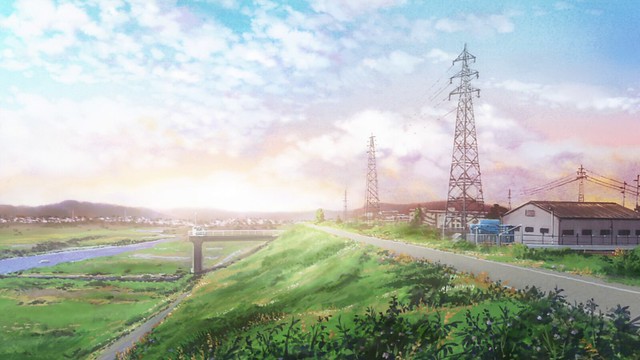 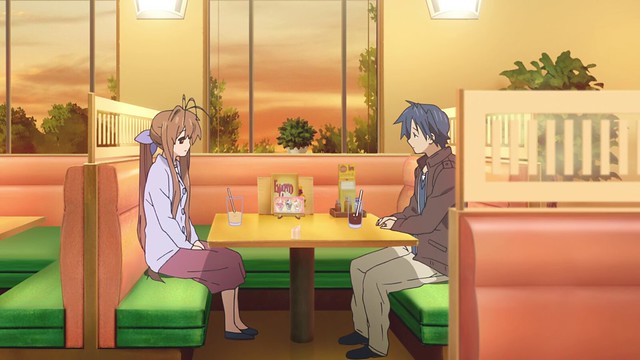 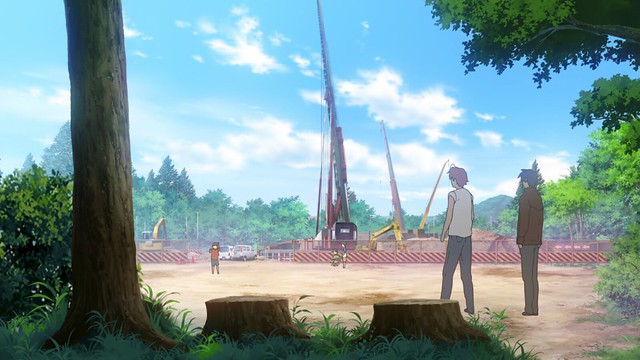 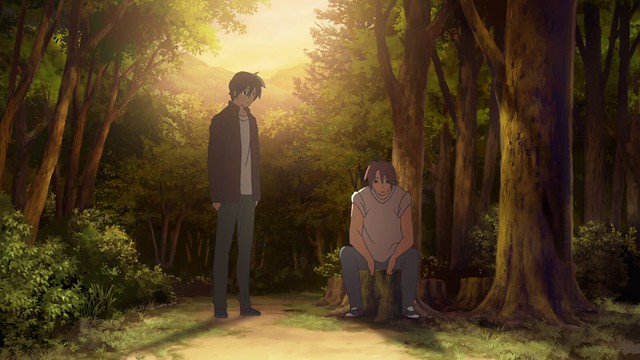 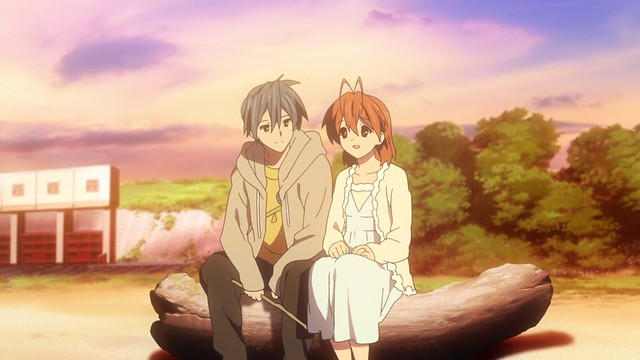 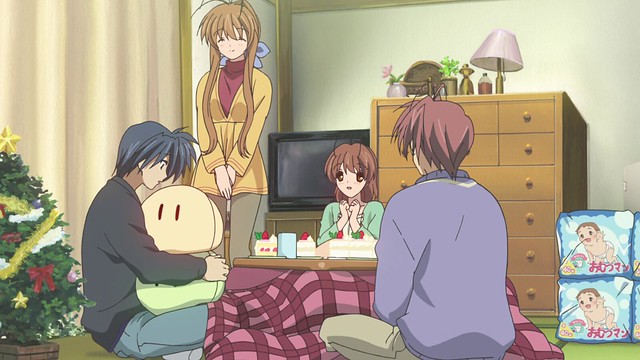 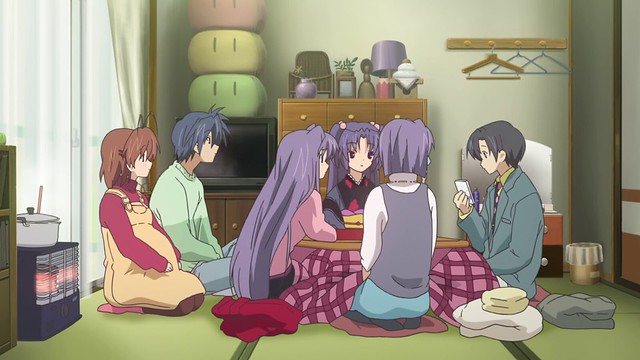 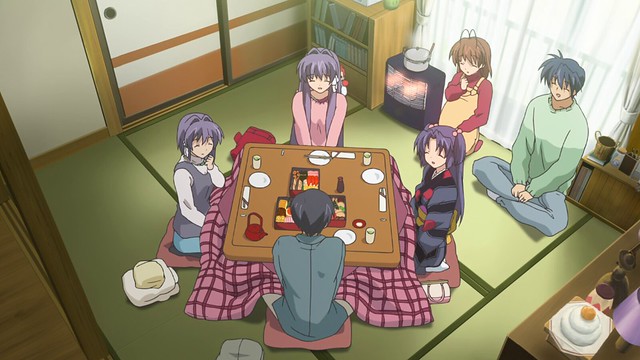 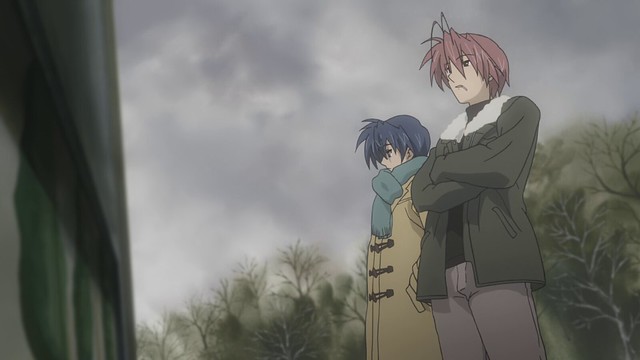 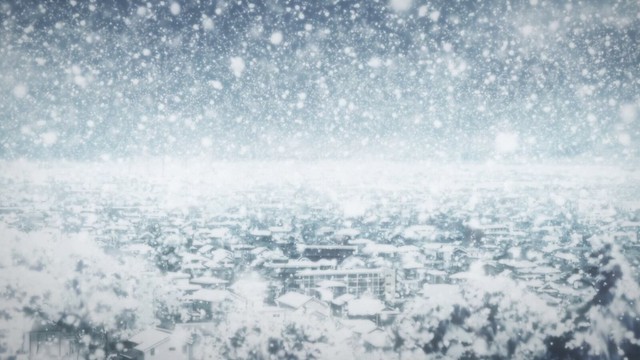 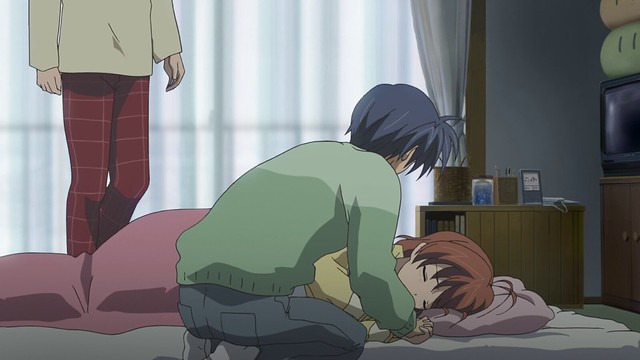 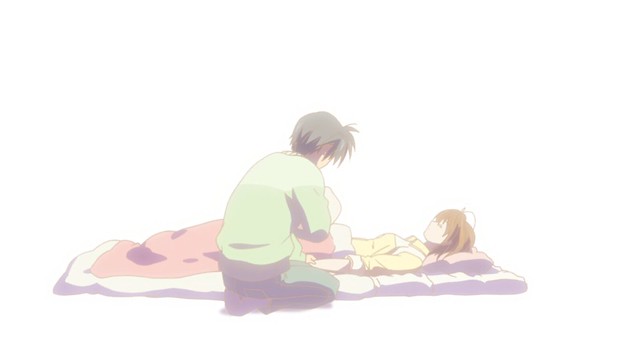 As ~After Story~ steps away from clearly-defined arcs and delves into Tomoya and Nagisa’s marriage, the series enters a realm that is exceedingly difficult to write for. Marriage is a completely different world for people, and there are so many aspects to consider that CLANNAD would doubtlessly have needed another twenty episodes to adequately portray it faithfully. Instead, ~After Story~ masterfully utilises imagery and the symbolism inherent to the seasons themselves to concisely and succinctly convey to audiences the emotions and feelings, the unspoken things that can happen in marriage. CLANNAD has long made use of weather and lighting to convey emotions in a moment; the seasons themselves take on a much more substantial role in ~After Story~ to further communicate the atmosphere of a given moment to viewers. Spring is about new beginnings, summer is a time to explore what a new family entails, and winter is viewed as a season to be hated, bringing death and suffering to those caught in its frigid confines. Viewers can tangibly feel the cold as Nagisa succumbs, and are made to understand just how devastating this is for Tomoya, having seen every step in the journey he has taken, and the efforts he has made towards building a future for Nagisa and Ushio. While it seems unnecessarily cruel to put Tomoya in such a situation, Nagisa’s death has a critical role to play for Tomoya; he’s spent much of ~After Story~ forging ahead into the future. It is therefore clear that his intentions is to forget his past, but this loss now forces Tomoya to look inwards: winter is also a time of self-reflection, and light eventually returns to the world ~After Story~ takes this route to remind audiences that, unless one is able to make peace with their past, there is no future to pursue. Thus, Nagisa’s death is necessary to pull Tomoya back and force him to understand his past. There is no other easy way of putting this, even if it is callous to suggest such a thing – beyond this suffering, there is more that ~After Story~ strives to convey to readers.