Small Palms: A Swan Song in Revisiting CLANNAD ~After Story~ At The Ten Year Anniversary

“Meeting you was the best thing that ever happened to me. You made me so happy. I don’t want you to be lost, or afraid, or anything like that. From here on out, I know things might be hard sometimes. But no matter what happens, please don’t regret meeting me.” –Nagisa Furukawa

The Girl in the Illusionary World is unable to continue on her journey, having failed to construct an operational aircraft and the robot regrets having encouraged her in this undertaking. She reveals that they knew one another in a previous world, and as she hums Dango Daikazoku, the world begins fading away. Tomoya appears on the hillside road lined with cherry blossoms and chases after Nagisa, promising that he’ll never let go. Nagisa is glad that he’d called out to her, and Tomoya reawakens prior to Ushio’s birth. Nagisa has survived delivering Ushio, and Tomoya prepares to bathe her for the first time. Outside, a miraculous phenomenon can be seen – orbs of light are floating into the sky. The couple sing Dango Daikazoku to Ushio, and begin their journey of raising her together as a family no longer bound to their doom. Five years later, Kyouko is taking Fuuko to the hospital for a check-up, but Fuuko runs off into the nearby woods, where she encounters Ushio sleeping peacefully under the shade of a tree. This marks the end to a journey spanning a year and five months: from CLANNAD‘s first episode, where Tomoya and Nagisa met, to the conclusion resulting from a well-deserved miracle that allows the Okazakis to finally find happiness, CLANNAD has come to an end, and with it, my own journey of revisiting the series ten years after its original airing. In this seventeen-month long journey spanning a total of forty-four episodes, CLANNAD has explored an incredible range of themes, encapsulating this in a story that is engaging, humourous and poignant manner. The characters are multi-dimensional, complex and human; in conjunction with a vividly-portrayed world where attention is paid to detail, weather and lighting that augments every emotion and a sublime soundtrack, CLANNAD represents anime at its very best, telling a compelling and genuine story that viewers of all backgrounds and experiences can connect with.

For me, CLANNAD is a veritable masterpiece among masterpieces for its exceptional execution and presentation of life lessons essential for most everyone. However, the series has not impacted all viewers quite to the same extent, and in particular, the finale left viewers feeling that deus ex machina was employed to provide Tomoya with a happy ending. In effect, these individuals contend, Tomoya is given a free pass and it would take a considerable suspension of disbelief to accept such an ending. Such a reaction can only arise from individuals who’d perhaps forgotten the presence of the light orbs and their function as a visual representation of the strength of individuals’ wishes: ~After Story~ is a very lengthy story, after all, and there are numerous details that foreshadow the possibility of Tomoya being given a second chance. To deny Tomoya this happiness is to contradict the expectations that ~After Story~ have set; Tomoya’s acts of kindness permeate the whole of CLANNAD, and the series does, on top of its other themes, strive to convey that 好心得好報 (jyutping hou2 sam1 dak1 hou2 bou3, literally “good heart, good repayment”, and most similar to the English expression “what goes around comes around”). Having been made to suffer, and in spite of all this, coming out stronger and a better man for it, Tomoya has earned a happy ending with Nagisa and Ushio ten times over for having put everyone ahead of himself throughout CLANNAD. His selflessness and altruism cost him, but Tomoya never complains, never expects repayment and simply does his best for those around him, even when faced with his own challenges, and as such, the forces that are recognise this. Leaving a trail of mended dreams and lives in his wake, even as he struggles to find happiness for Nagisa and Ushio, to deny Tomoya a happy ending would be the epitome of cynicism – the visual novel provides a more detailed explanation of why this is allowed to occur, and in the anime, the end result is identical. Viewers are treated with closure to a very lengthy and very rewarding journey; there is no doubt that Tomoya and Nagisa can share a peaceful and normal future with Ushio. This is the ending that viewers deserve and needed for such a powerful series which indubitably left a profound change in my life. 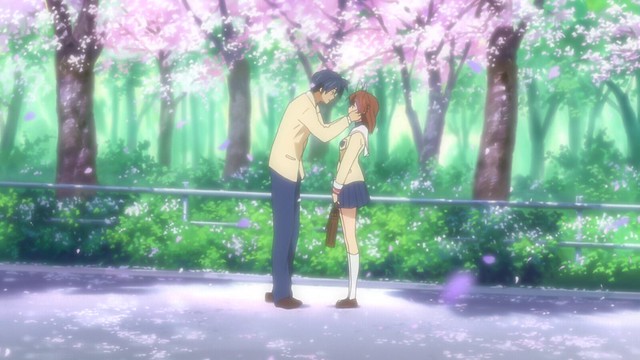 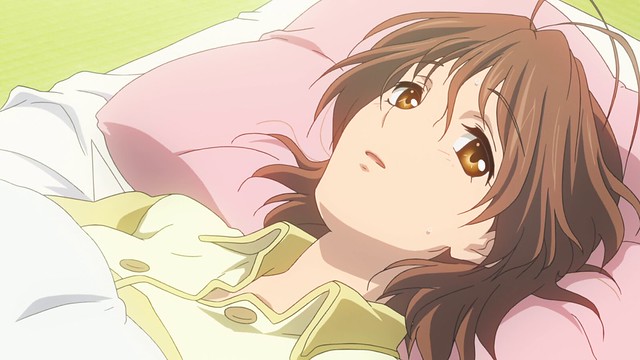 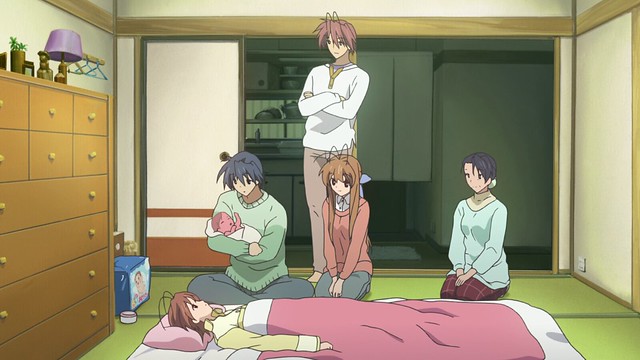 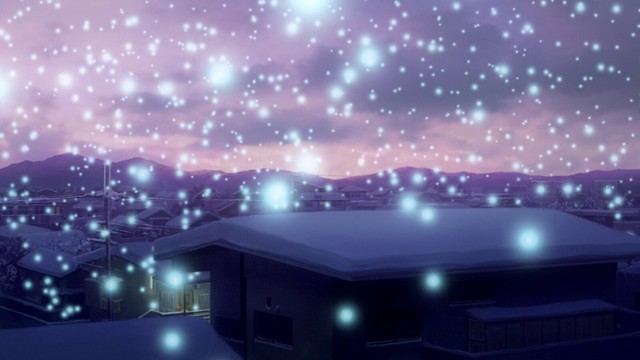 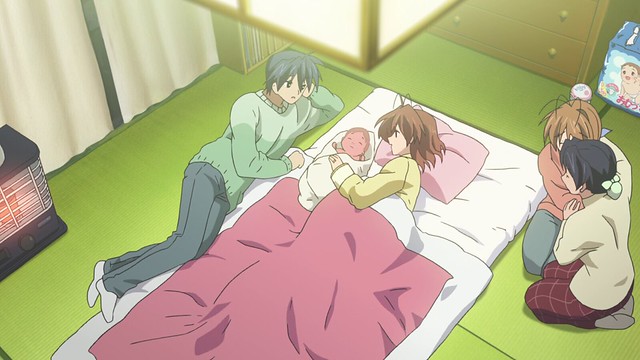 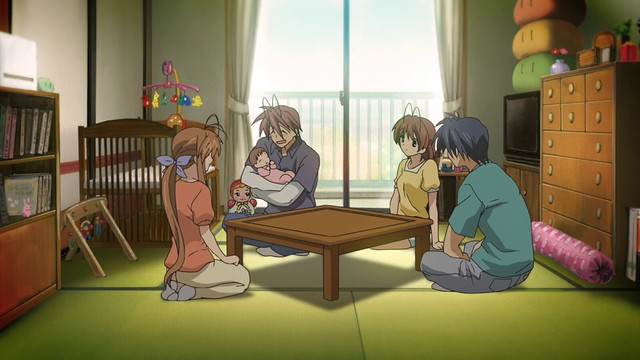 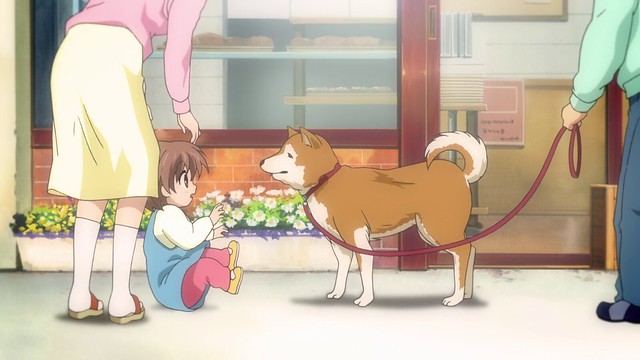 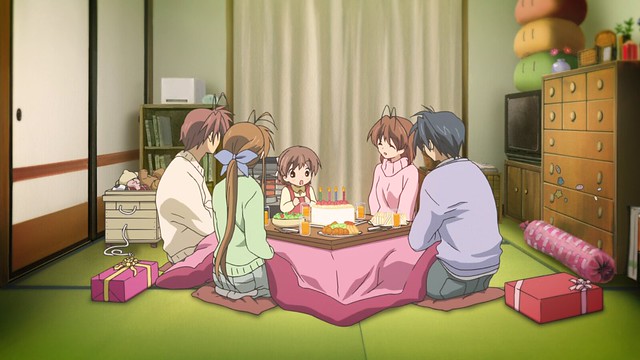 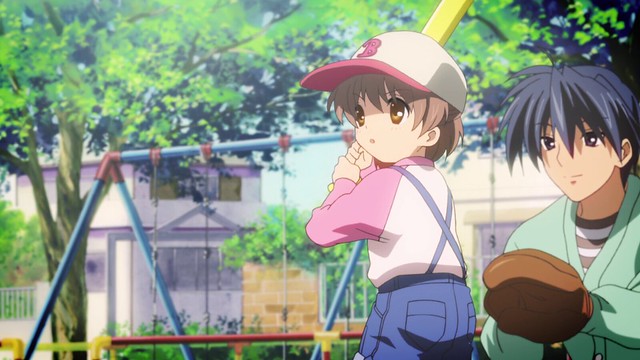 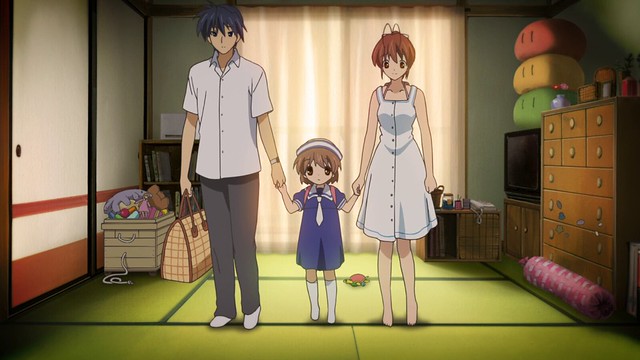 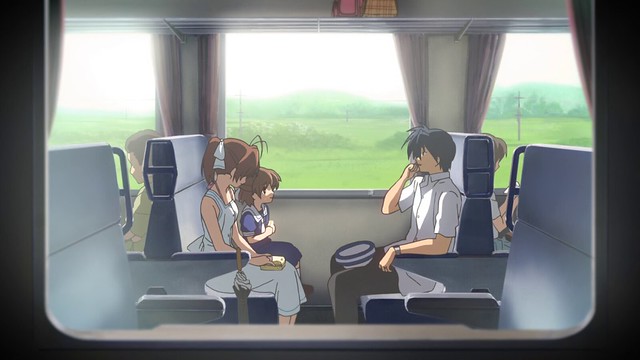 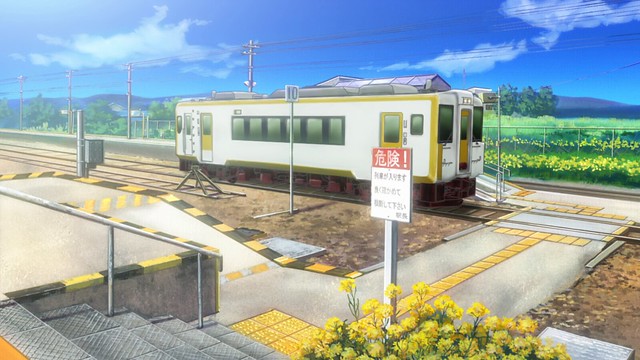 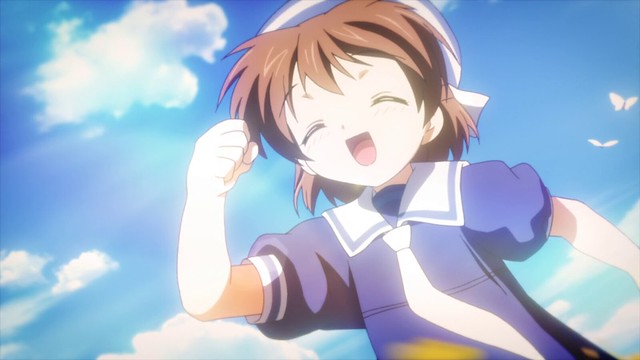 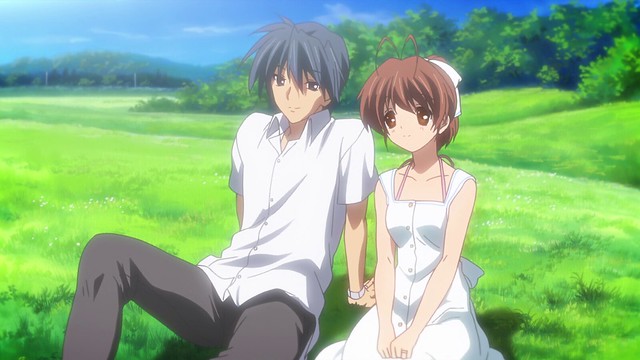 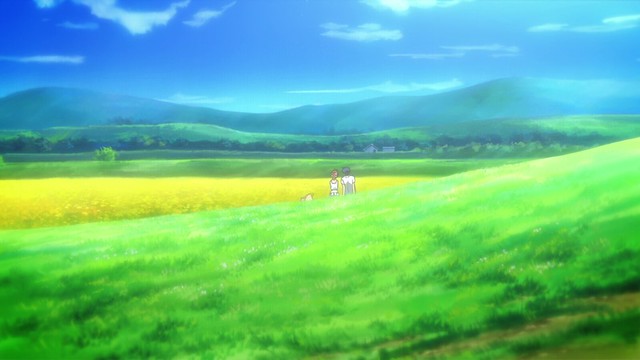 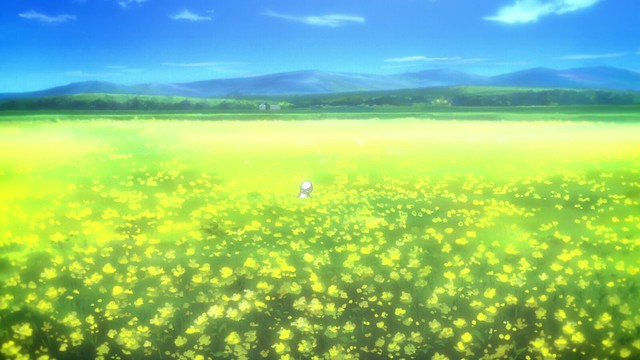 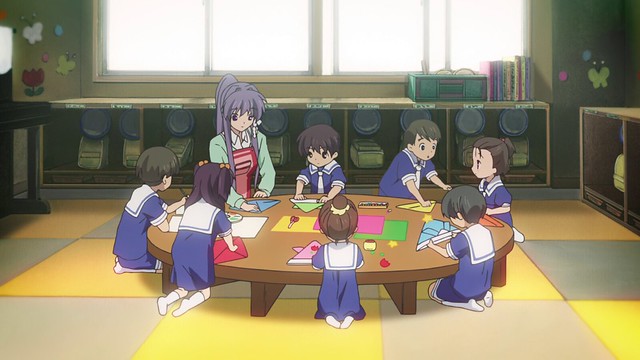 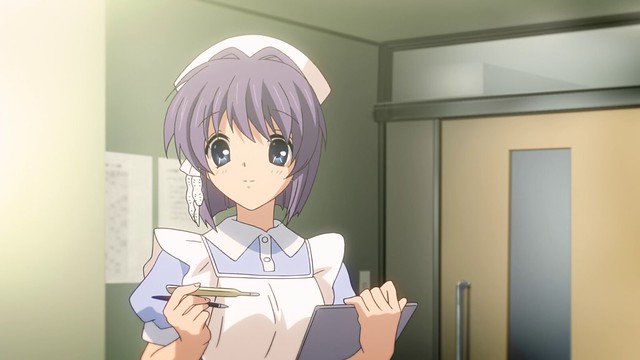 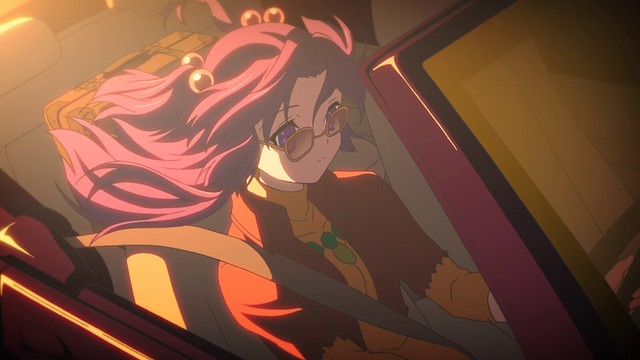 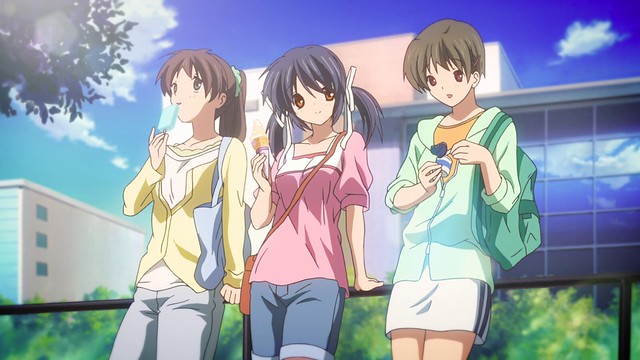 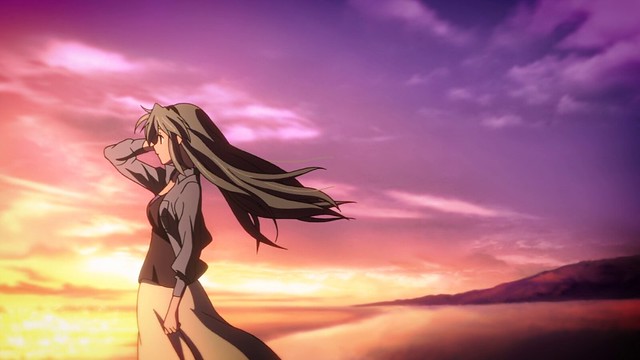 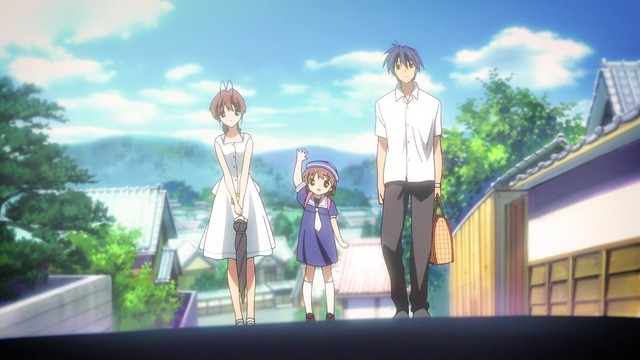 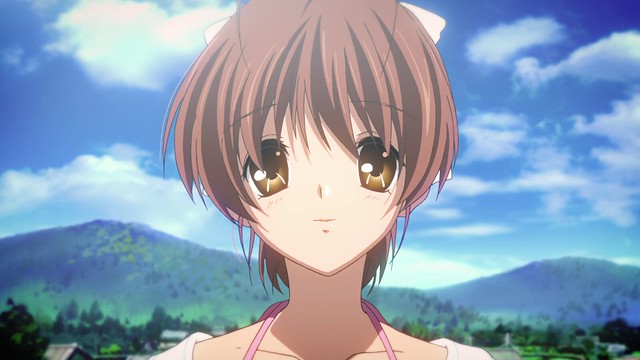 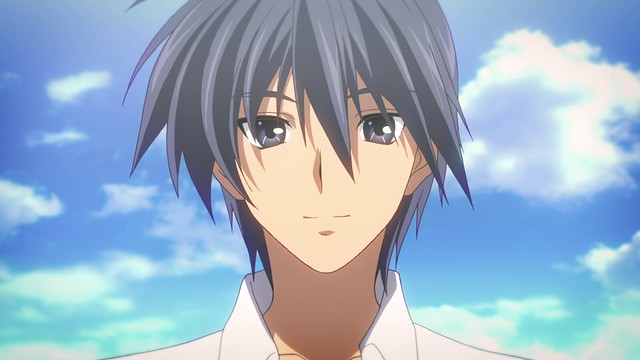 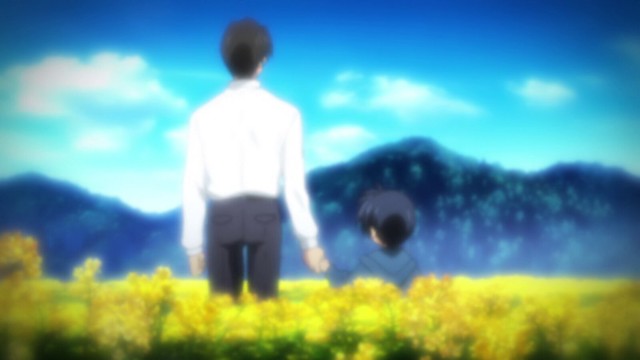 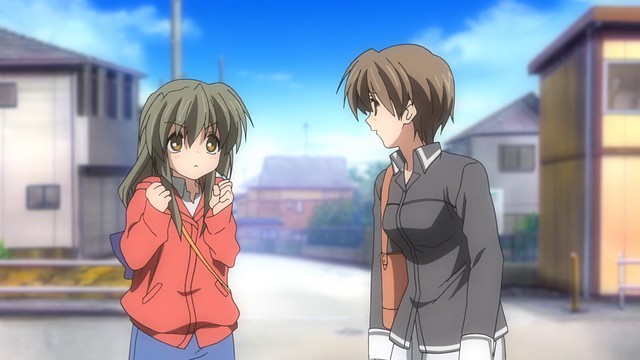 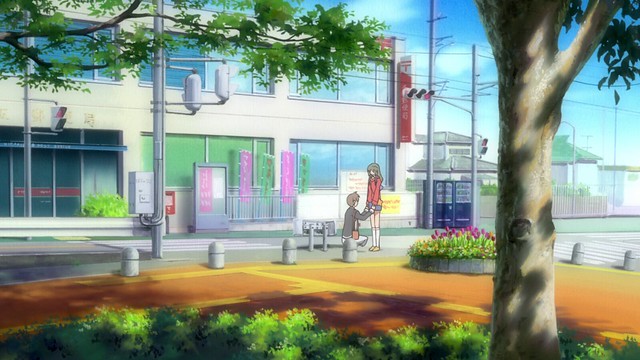 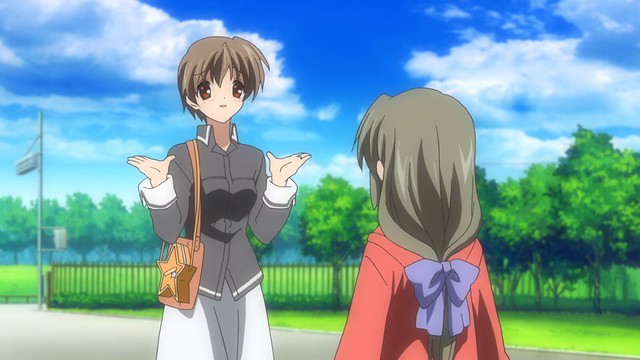 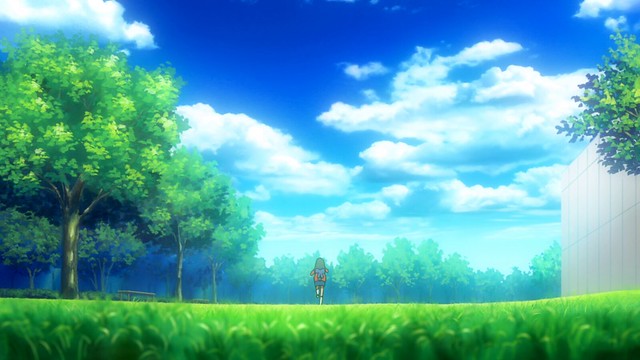 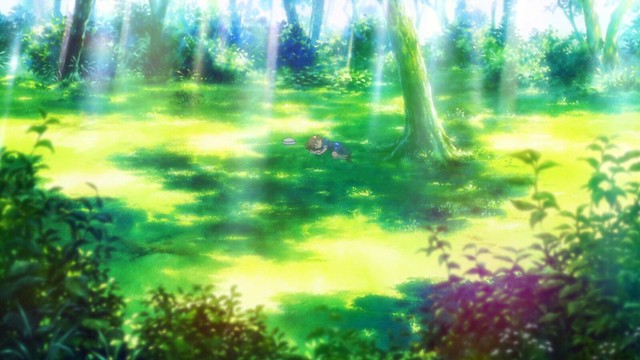 While a decade may have passed since CLANNAD and CLANNAD ~After Story~‘s airing, that the anime remains relevant, moving and engaging in the present is no small feat. With its universal themes of family, friendship, kindness and resolve, CLANNAD is a timeless anime that deals in matters that are common to all of humanity. It is for this reason that CLANNAD is peerless as an anime – touching so many elements that are involved with being a decent human being, the sorts of thing I know in my tongue as 做人道理 (jyutping zou6 jan4 dou6 lei5, literally “principles of being human”), the series forces viewers to introspect and consider what matters most to them. While CLANNAD may not deal with academic, social or philosophical matters that some echelons of the anime community feel to be more important in what counts as a “good” anime, I personally find that the anime that are most relatable and relevant, happen to be those that deal with life lessons ubiquitous to all people. At the end of the day, regardless of one’s station, education and occupation, everything boils down to how one treats those around them. In the contemporary world, it is disappointing and disheartening that so many have forgotten these fundamentals: people no longer look out for one another and put themselves ahead of others with greater frequency, and as such, anime such as CLANNAD can act as very subtle reminders that life is more than the self; happiness is found in being there for others, for putting time into things far greater than oneself. Despite its themes being at the forefront of most everything in CLANNAD, the series never preaches these messages to viewers, leaving them to draw their own conclusions after everything has wrapped up, and subtly inspiring audiences to do good, put in an honest effort and appreciate their blessings. I am certainly glad to have watched CLANNAD: this is a series that pushed me to explore what love is and allowed me to find the strength to face down the MCAT. For everyone who’s been reading these posts every step of this seventeen-month-long journey, I would like to thank you from the bottom of my heart for having accompanied me all this way, as well as for putting up with what I would imagine to be increasingly sentimental and soppy posts.

2 responses to “Small Palms: A Swan Song in Revisiting CLANNAD ~After Story~ At The Ten Year Anniversary”