3 Comments Posted by infinitezenith on June 2, 2019

“The greatest enemy of knowledge is not ignorance, it is the illusion of knowledge” –Daniel J. Boorstin

When Sakuta Azusagawa meets actress Mai Sakurajima, who is clad in naught but a bunny girl outfit, he is simultaneously drawn to her and begins to wonder about the mysterious phenomenon that afflicts youth. He eventually learns that no one can see Mai, and that this is related to how people remember her. Sakuta eventually confesses his love for her in front of the entire school, burning her existence into everyone’s memories, and sets about helping those around him with their own challenges in adolescence. Sakuta helps Tomoe Koga overcome her anxiety about being accepted and pretends to date her, forcing her to come to terms with her feelings for him. He next aids Rio Futaba, the sole member of the school’s science club who believes Sakuta’s experiences have scientific backgrounds until she manifests two bodies as a result of lacking confidence in herself. Sakuta manages to rectify this, and later, helps Nodoka Toyohama, Mai’s younger half-sister who felt as though she was living under Mai’s shadows, after Nodoka switches bodies with Mai. Sakuta’s younger sister, spurred on by Sakuta, decides to set goals for herself: she suffered from memory loss as a result of the trama from being bullied and reverted to a more infantile personality. After Sakuta’s efforts to help her reach her goals, Kaede reverts to her old personality, and a distraught Sakuta regrets not being able to do more for her until a mysterious visit from Shōko helps him recover from his melancholy so that he can fully support Kaede, who feels ready to pick up her life from where they’d left off. This is Seishun Buta Yarō (literally “Young Asshole”, but officially translated as “Rascal Does Not Dream of Bunny Girl Senpai”, an obvious reference to Philip K. Dick’s Blade Runner and Aobuta for brevity), an adaptation of a 2014 light novel about the challenges and turbulence that youth face as they struggle to learn of their place in the world. At its core, Sakuta is portrayed as a unique protagonist, being strictly mundane in manner and appearance. Unlike other light novel protagonists, Sakuta is not uncommonly intelligent or lucky; instead, he is exceedingly kind, has a particular way with words and is exceptionally faithful. The sum of these elements creates a highly focused story where audiences are confident that Sakuta will work out a solution without creating situations that typical light novels push towards, and his genuine concern for those around him results in a protagonist who is exceedingly likeable, giving viewers incentive to follow his story and root him on as he strives to help each of Mai, Tomoe, Rio, Nodoka and Kaede move beyond their situations.

For its exceptional presentation of what the struggles of youth may manifest as in a visceral manner, it is unsurprising that Aobuta immediately became a favourite among viewers when it aired. Aobuta has heart, capturing the problems that adolescents see in their lives and giving them memorable metaphors that really describe what being young is like; as an adult, we tend to see problems as having a rational, logical answer, but as youth, what is obvious to us may not be so apparent, creating this chaos and conflict. However, as Sakuta demonstrates, the solution lies not in a reasoned process, but through compassion: for each of Mai, Tomoe, Rio, Nodoka and Kaede, he works to understand their situation and then determines how to help the individual in question overcome their insecurities and doubts. Aobuta shows that Hajime Kamoshida evidently has a strong grasp on how to visualise youth and their struggles in a compelling manner, and this is ultimately Aobuta‘s main draw. However, while it is sufficient to focus on the human aspects of Aobuta, Kamoshida’s inclusion of quantum theory into his work as the metaphor has given the impression that a functional knowledge of matters as varied as wave function collapse, or free will versus determinism. However, these references weaken with time within the anime, and this suggests a deliberate choice on Kamoshida’s part. Taken at face value, these are ultimately are ill representations of the phenomenon that Sakuta and the others experience and end up being a minor distraction. While poorly-applied references to quantum mechanics may have had the potential to decimate the emotional impact and strength of Aobuta‘s narrative, it speaks to Kamoshida’s understanding of the human aspects that allows Aobuta to remain immensely engaging and enjoyable. Simply, knowledge of existential philosophy and quantum theory are completely unnecessary towards finding the strengths in Aobuta, a series whose emotional and interpersonal pieces far exceeded my expectations coming in. 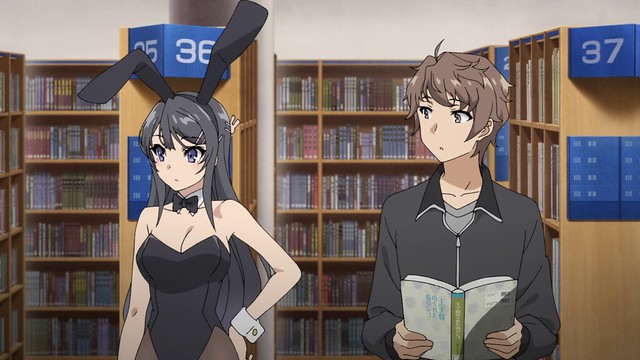 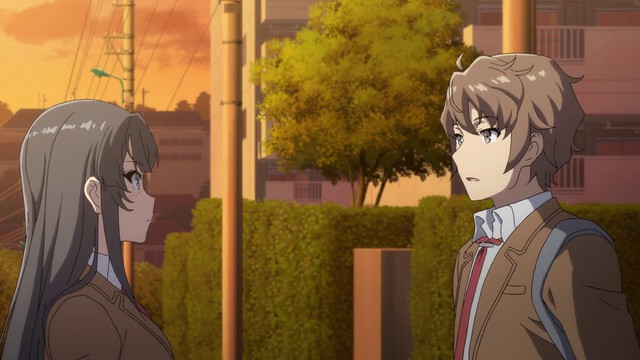 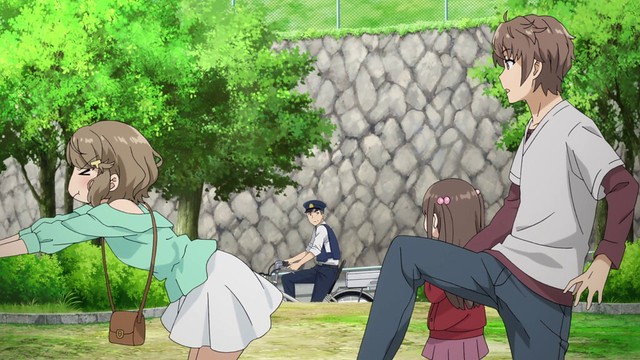 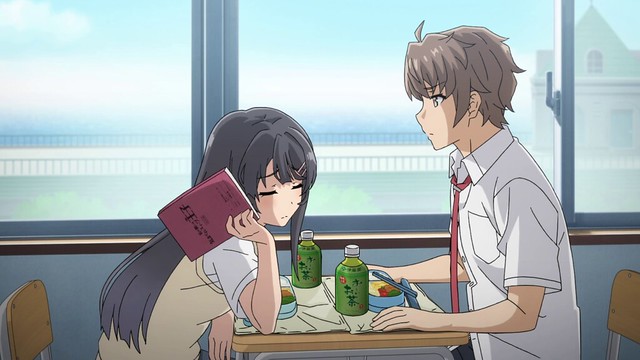 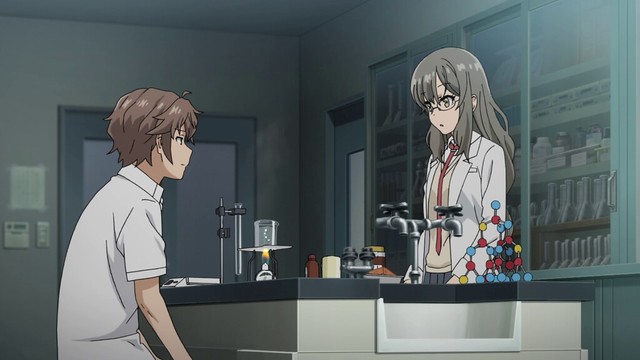 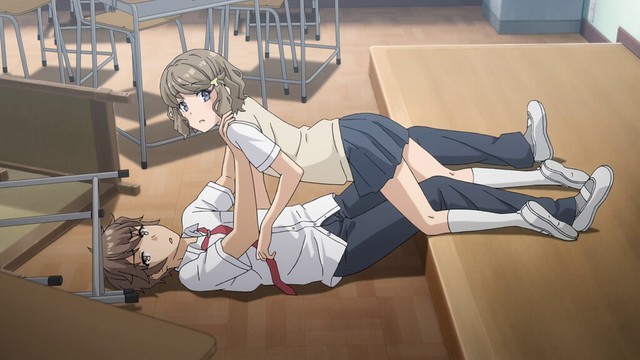 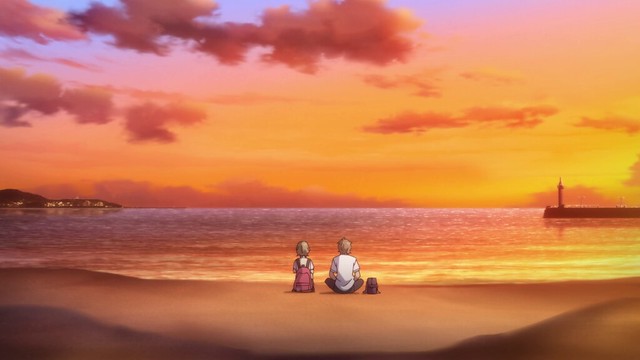 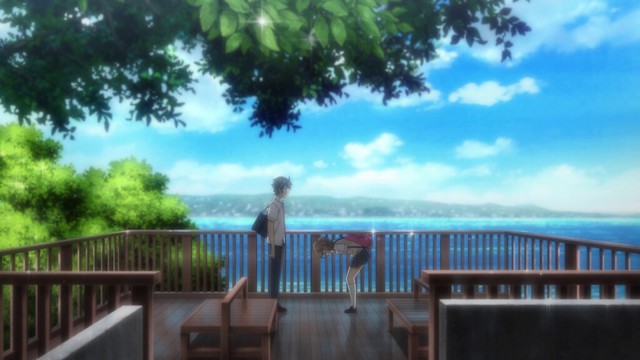 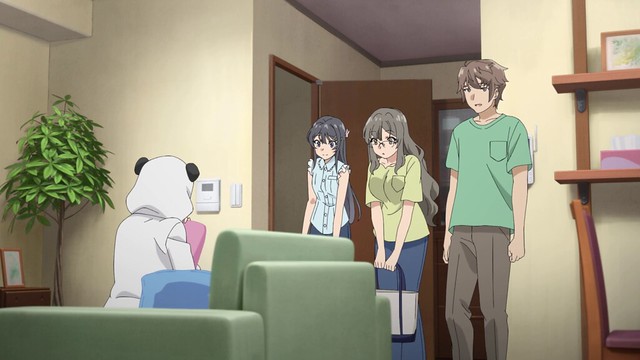 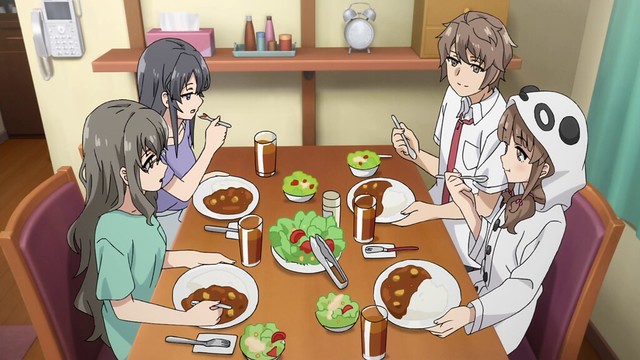 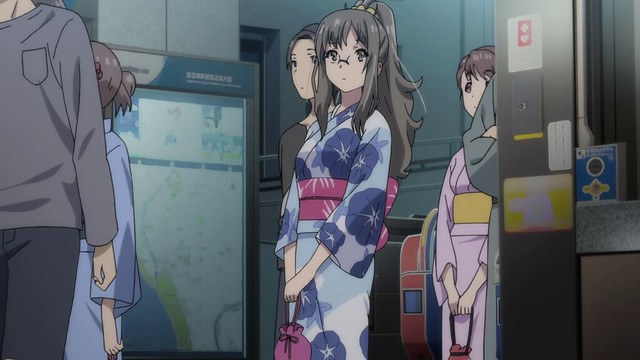 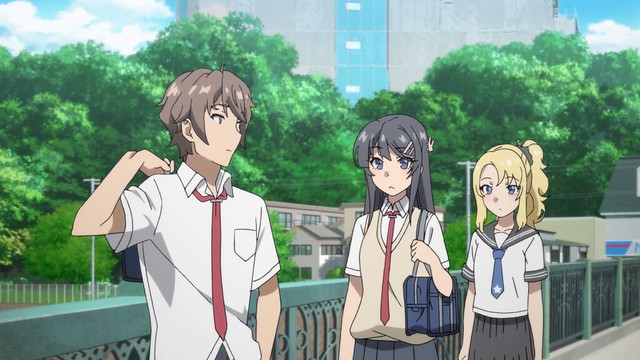 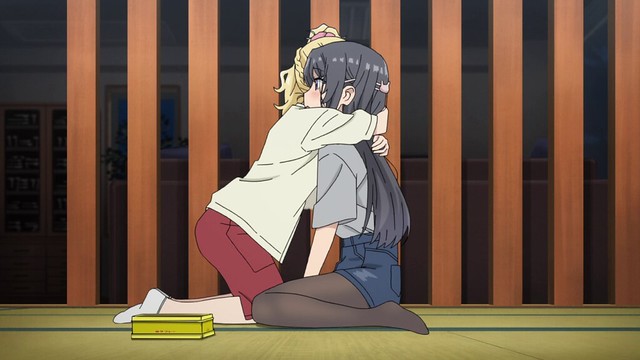 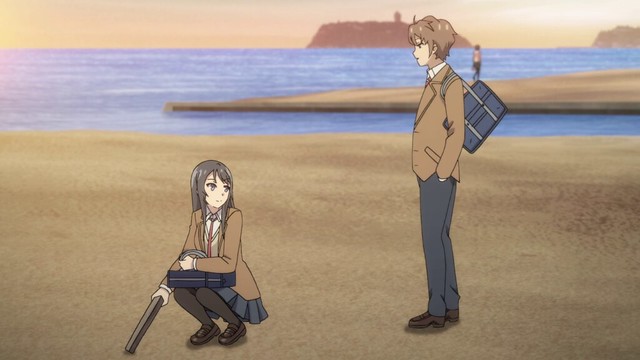 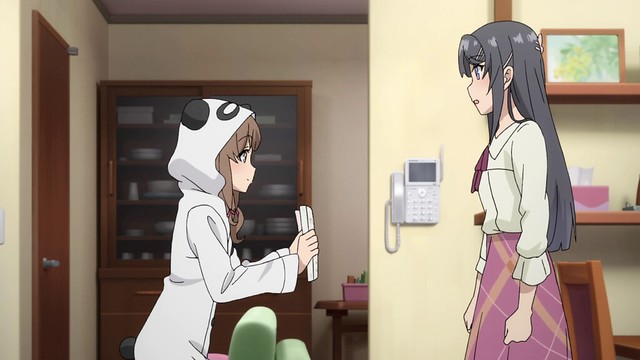 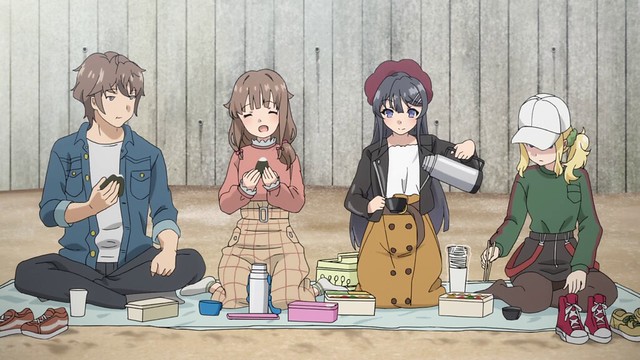 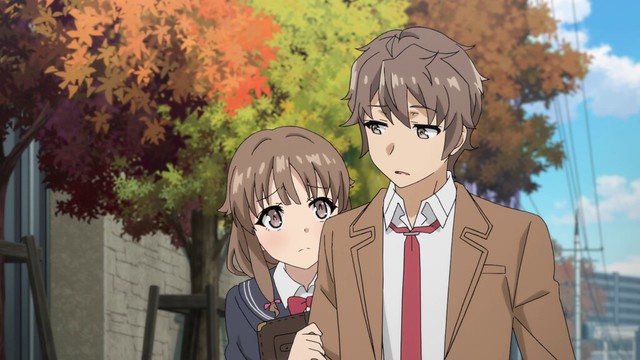 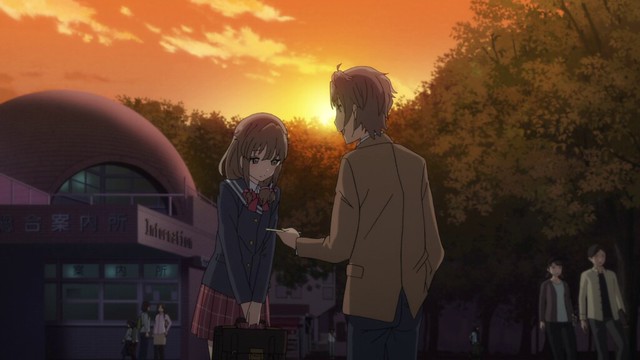 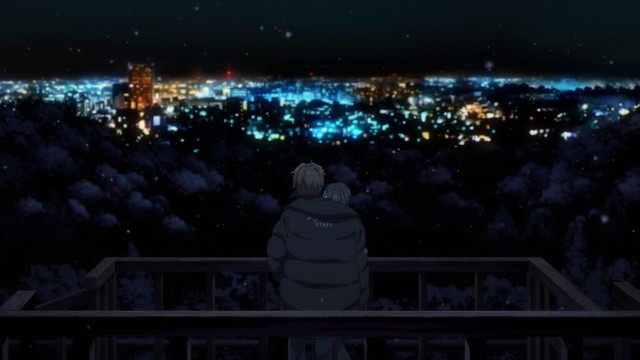 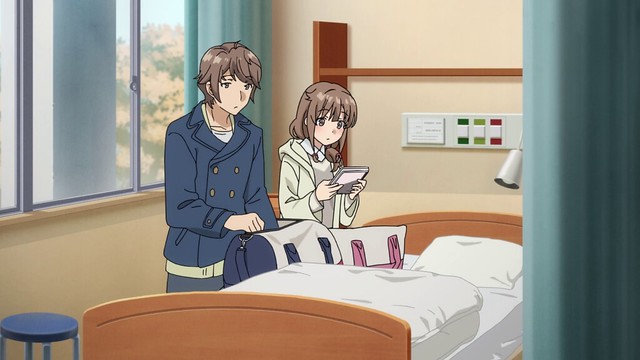 The inclusion of such abstract concepts in Aobuta as a deliberate choice allows Kamoshida to deal elegantly with one long-standing complaint I have about light novels: their propensity to force pedantic characters into the role of the protagonist. Aobuta has Rio embody this role as a secondary character, and when I began watching the series, I was unimpressed with her role in acting as a resource for seemingly explaining away the phenomenon that Sakuta encounters. However, progressing into Aobuta meant seeing the characters’ true personalities and nature be explored. After Rio herself experiences a manifestation of this phenomenon, her inclination to rationalise it is diminished: Kamoshida appears to suggest, through Rio’s increasingly half-hearted efforts to present Adolescent syndrome as having a scientific basis, that there simply is no effective way to compare something as nuanced and complex as human emotions during youth with thought experiments meant to deal with science. The pseudo-science is thus displaced by genuine, heartfelt moments as Sakuta helps Tomoe, Rio, Nodoka and Kaede in overcoming their internal struggles. Consequently, this means that viewers have no need to consider the withertos and whyfors behind why things happen: the who and the what are much more valuable. As Aobuta progresses, Rio becomes less of an encyclopaedia and into a fully-fleshed out character. The lessons of Aobuta are that a story’s enjoyability and ability to capture an audience’s interests lies strictly and entirely within its characters, as well as their dynamics. In the complete and total absence of philosophy and science, series that deal with youth can therefore remain incredibly compelling because at its core, they are about the people and how they overcome their challenges, rather than real-world principles that demand dedicated study. Beyond its execution, Aobuta featured solid technical aspects that come together to create an anime that merits praise. Having now seen it for myself, I understand why people consider this to be a strong series, and so, I can readily recommend Aobuta, albeit with one caveat: prospective viewers should not go into Aobuta thinking quantum mechanics and philosophy are requirements, as the series has numerous merits that make it exceptionally engaging and compelling.