The Giant Walkthrough Brain: Revisiting a Presentation with Jay Ingram at the Five Year Anniversary

“Ladies and gentlemen, children of all ages. Please take your seats, and welcome to The Giant Walkthrough Brain. Introducing your tour guide…Jay Ingram!”

Three years after Neil Armstrong became the first human to walk on the moon, neurophysiologist Joseph E. Bogen, MD, published A Modest Proposal, or The Planning, construction and use of a giant brain for the edification and entertainment of us all to the Bulletin of the Los Angeles Neurological Society. This “giant walk-through brain” was intended to be a museum of gargantuan proportion, standing some 150 metres in height. Bogen’s proposal was never taken seriously, and his vision faded into obscurity. Fortunately, in 2014, science communicator and host of Daily Planet, Jay Ingram, adopted Bogen’s concept of a brain museum and approached the LINDSAY Virtual Human lab at the University of Calgary with a proposal of his own: to construct and implement a giant walk-through brain show that would truly bring Bogen’s vision to life. Part musical performance and part science communication, The Giant Walkthrough Brain covers the essentials of brain function, from major structures to the electrochemical reactions that allow neural impulses to travel through the brain, and explores major figures in the history of neurophysiology. Whether it be Phineas Gage, who survived impalement from a tamping rod during an accident and his pronounced personality change, to how Alois Alzheimer came to diagnose Auguste Deter with what is known as Alzheimer’s disease, the whole of Ingram and The Free Radical’s presentation in The Giant Walkthrough Brain created an incredibly accessible, and successful performance that provides the public with a memorable and catchy introduction to the complexities of the human mind. Ingram and the Free Radical’s performance was accompanied by a virtual Giant Brain, implemented by the LINDSAY Virtual Human lab, which provided a highly viseral and immersive visual experience that brought Ingram’s performance to life. After opening to a sold-out crowd at the Banff Arts Centre during its début opening, The Giant Walkthrough Brain would go on to give critically-acclaimed performances at the Telus SPARK Science Centre in Calgary during Beakerhead 2014, two sold-out showings at the Timms Centre Edmonton during April 2015 and finally, two more sold-out performances at the Kelowna Community Theatre in January 2016.

Spanning an hour, The Giant Walkthrough Brain took audiences on a vivid journey through the brain’s major regions and presented pivotal figures in brain research. However, unlike a traditional lecture with its slideshows and dry presentation of the material, Jay Ingram and the Free Radicals bring each aspect of the brain to life by making use of the Unity project’s visuals in conjunction with a highly accessible, humourous and instructive talk. Each segment is broken up with a creative and clever song: from upbeat pieces that discuss dopamine and free will, to more sombre songs that explore Alzheimer’s Disease and Henry Gustav Molaison’s memory disorder. The wide spectrum of information gave audiences a glimpse of how complex the brain truly is. When it functions well, it functions exceptionally well and is counted as one of the most sophisticated constructs known to humanity. When any part of the brain malfunctions, the results are devastating and tragic. While neuroscience is something that is not always at the forefront of everyday thought, it is important to be aware of the highly complex machine that exists in all of us. In between the exceptional feats and sobering fragility of the brain, Ingram also discusses trivia about the brain, from how we perceive optical illusions to concepts of free will. A great deal of material is covered in an hour, bringing neurological research much closer to audiences in an accessible, informative and fun manner. This speaks to Ingram’s talents as a speaker, and also the creativity of those involved in the project’s development: while I am an alumni of the Bachelor of Health Sciences programme and have a some background in biology and medicine, The Giant Walkthrough Brain presented aspects of the brain in a different, novel perspective that led me to make new discoveries about the organ that makes us distinctly human. I learnt more about the brain by participating in the project than I did during the whole of my undergraduate degree. My involvement with the project also marked the first time that Jay Ingram and the Free Radicals had utilised a 3D, interactive visualisation in their performances before: a smooth implementation here contributed to the show’s successes.

While concepts surrounding a virtual brain museum predate my involvement with the project, The Giant Walkthrough Brain as I knew it began in the April of 2014. The LINDSAY Virtual Human lab was looking for an environment that was capable of supporting a virtual brain museum, and the in-house game engine, despite its extensibility, did not have the performance needed to render a model of the brain with satisfactory visual fidelity. In a curious turn of fate, the Unity game engine had been made free just a month earlier: having been employed in games such as Kerbal Space Program and Wolfire’s Receiver, the engine was a contender capable of handling the visual requirements The Giant Walkthrough Brain would need. The question remained: was Unity suited for creating an on-rails, scripted experience that could be timed with Ingram’s presentation and the Free Radical’s musical performance while at once providing traditional mechanisms for an image and video slideshow? The extent of Unity’s capabilities had not been tested at the time, and after successfully putting a similar brain model onto an iPad for coursework, I was tasked with determining whether or not Unity would fit the bill. After the first week of May had passed, I had ascertained that the component-based structure of a Unity project was flexible enough for the requirements outlined by The Giant Walkthrough Brain, and moreover, the use of C# scripting would allow for reuse and easy configuration of components that would allow any on-rails presentation to be easily reconfigured to synchronise with the performance. After my report to the team, The Giant Walkthrough Brain began development at full speed: I was made the lead developer in the project, becoming involved with implementation of the entire pathing and movement system, coordinated transitions between the brain museum, neurons and synaptic gap scenes, built the slide-show viewer that would allow images and videos to be displayed on the screen, and completed the minimap solution that translated the user’s location in world space to a 2D map on screen space to provide real-time feedback for viewers as to where in the brain the show was at any given time. Two full months of development later, and after rigorous testing of the Giant Walkthrough Brain Unity project itself, the software and the show were ready at last for a public performance at the Banff Centre. 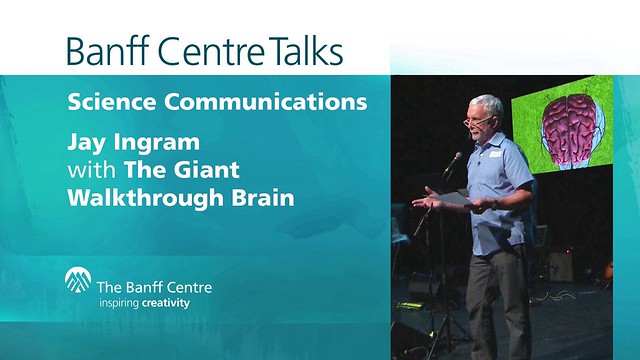 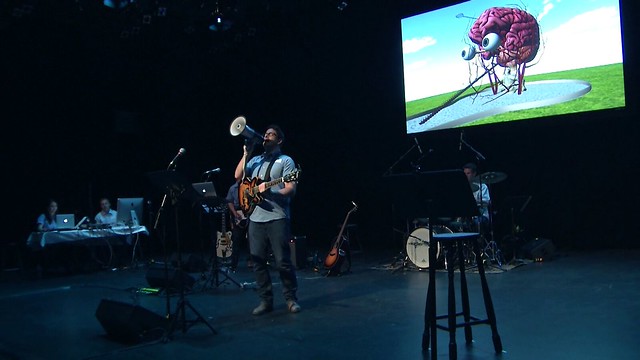 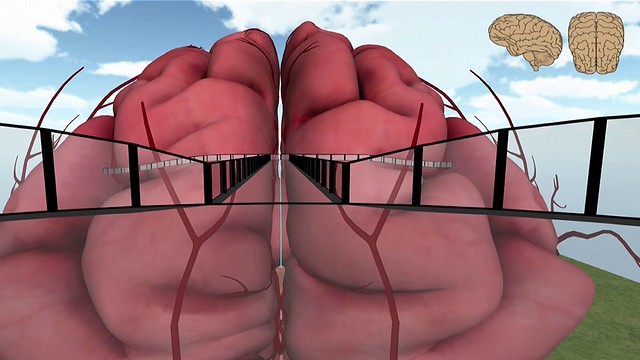 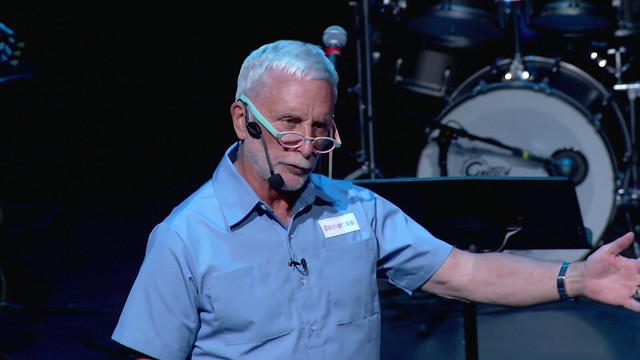 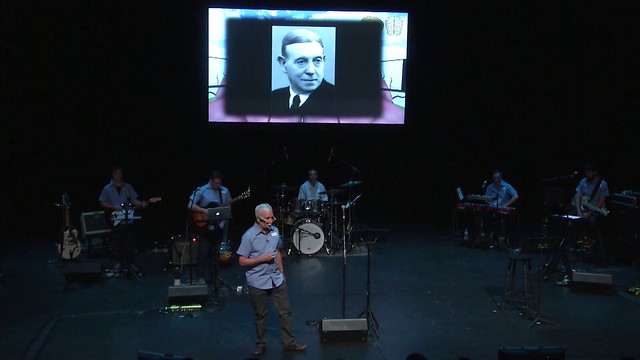 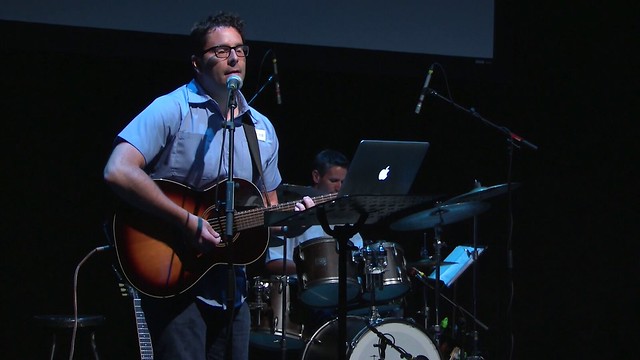 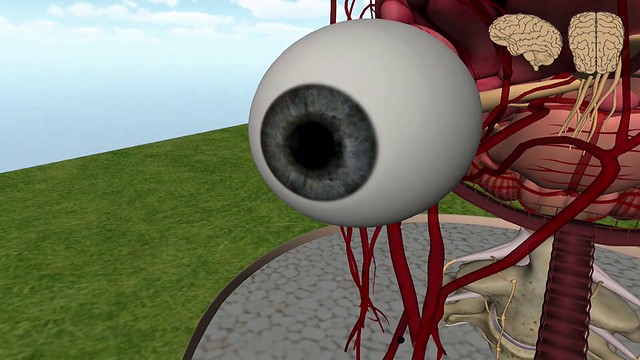 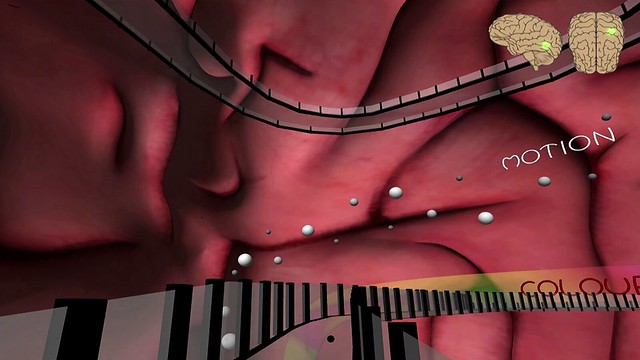 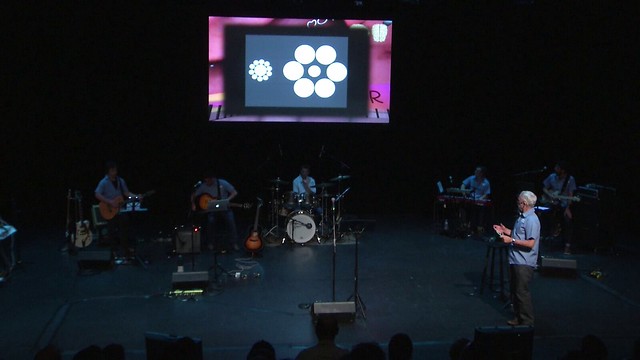 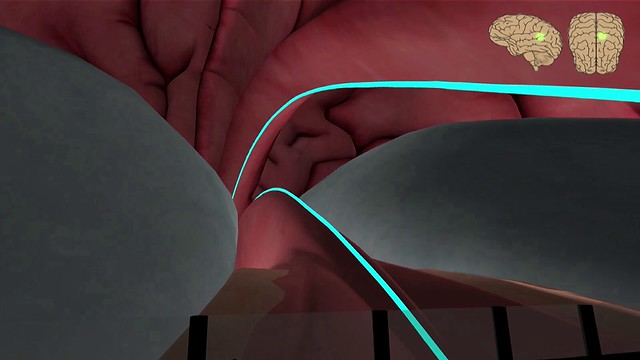 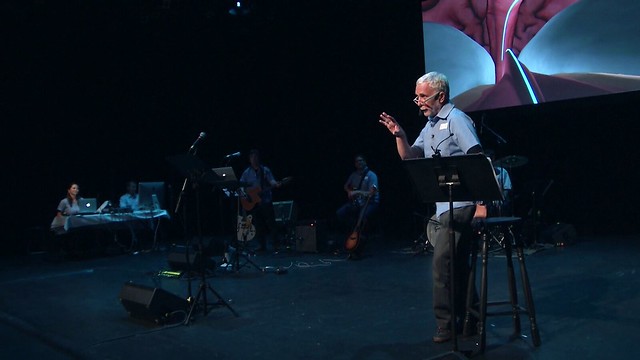 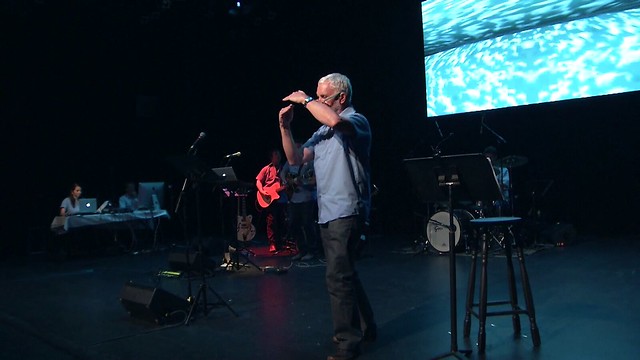 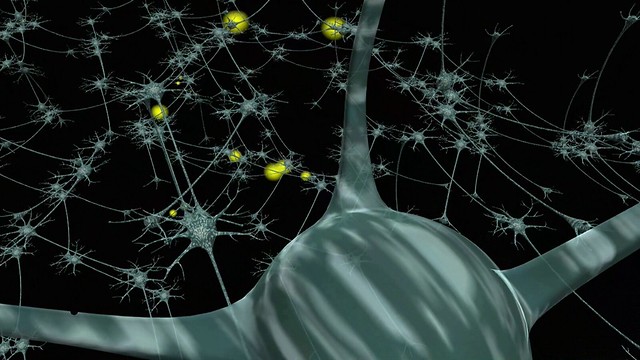 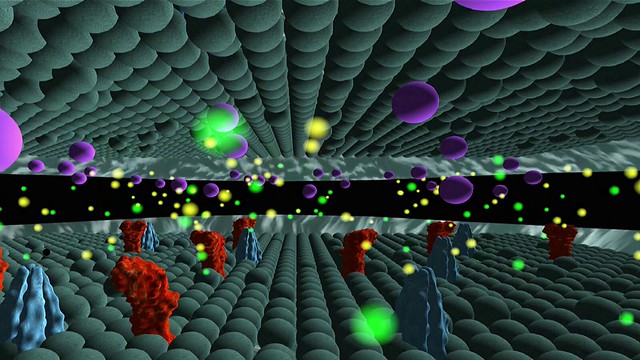 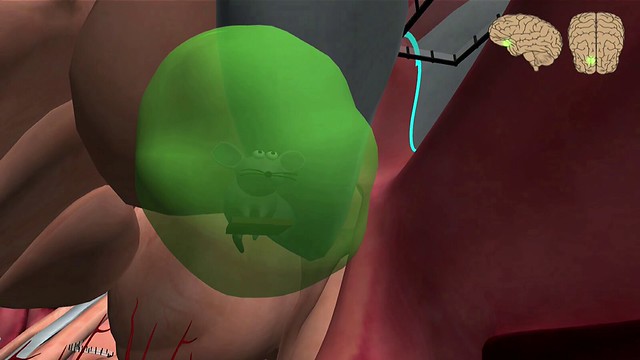 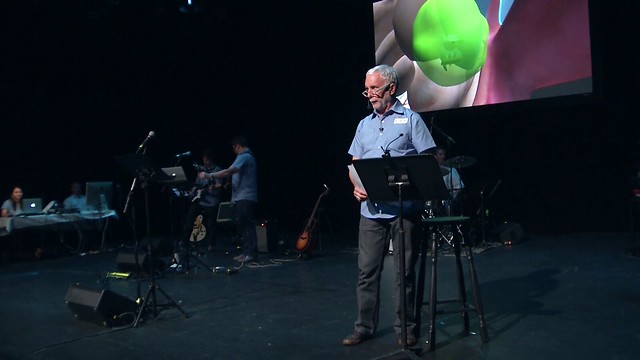 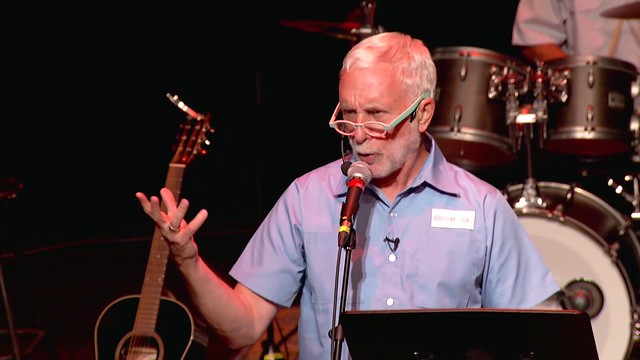 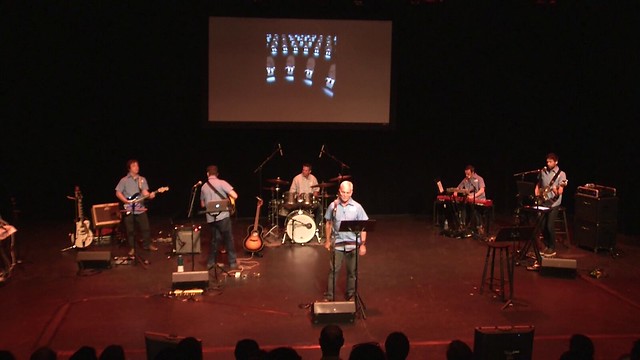 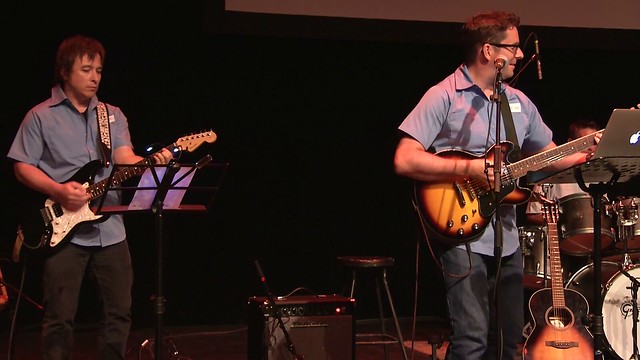 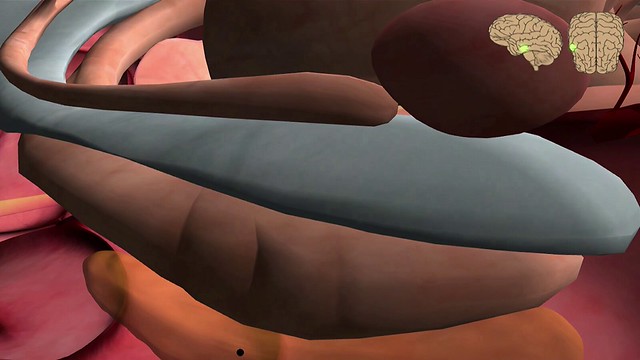 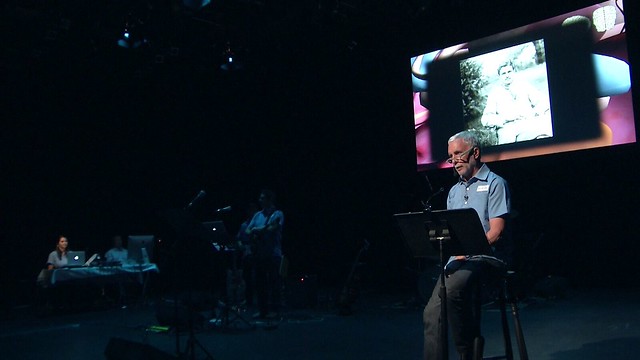 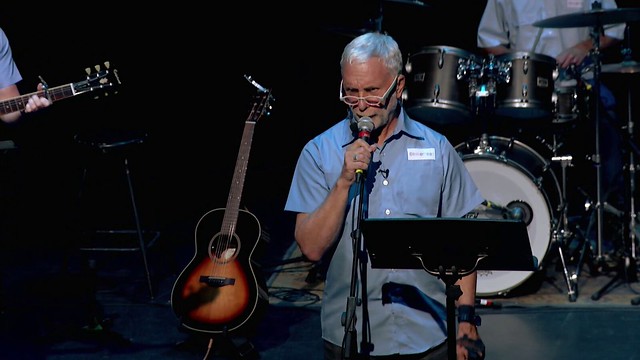 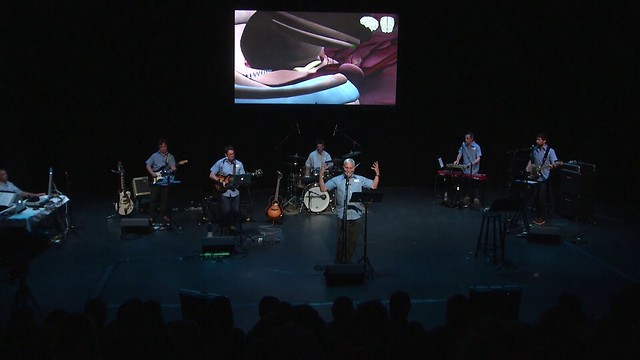 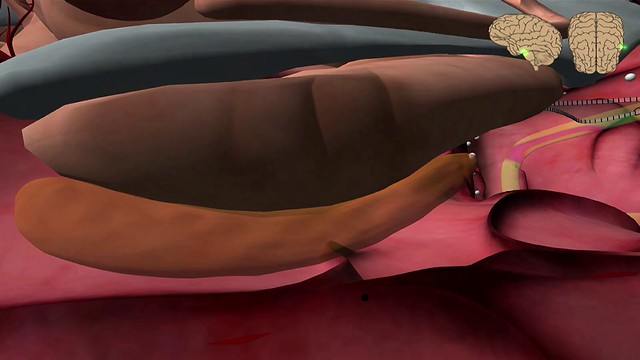 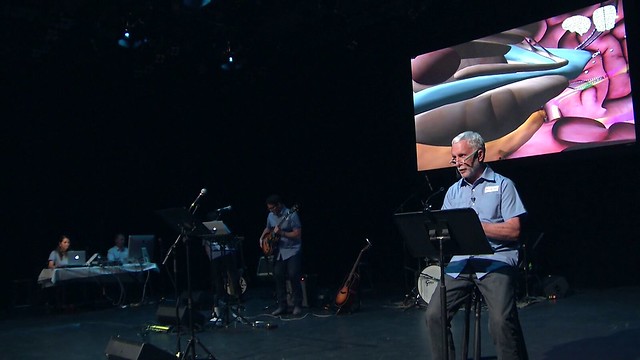 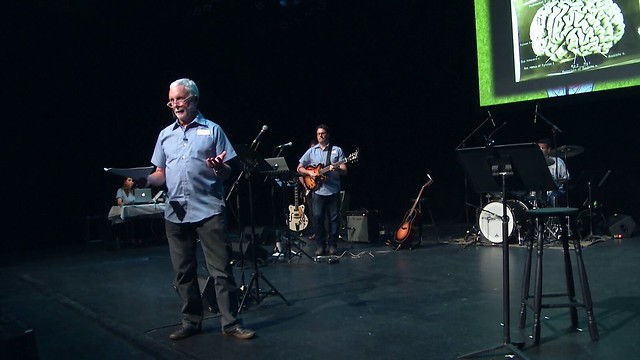 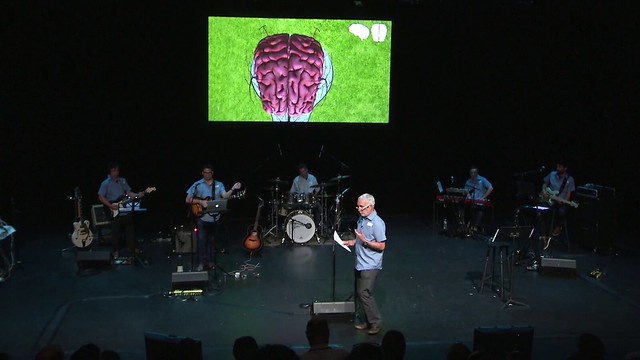 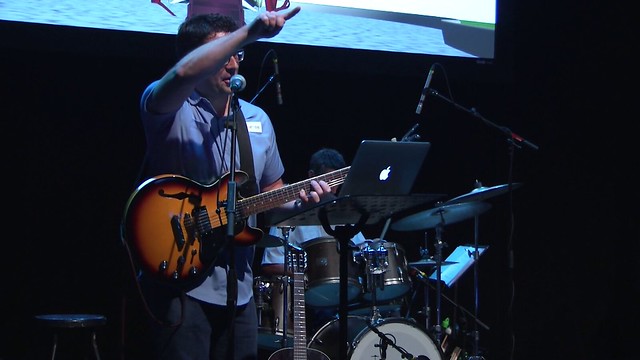 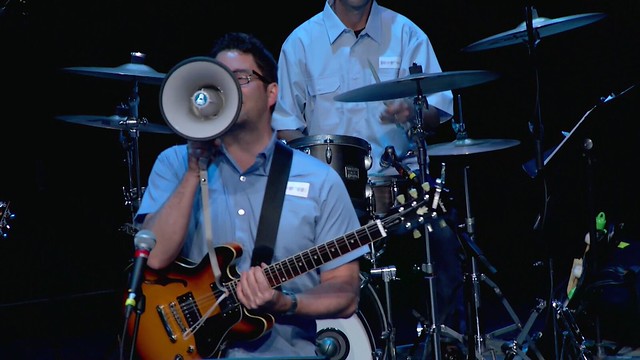 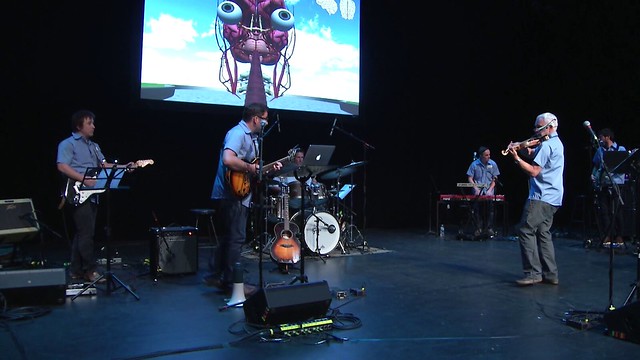 July 30, 2014 was opening night. I had sat through no fewer than three dress rehearsals, and had spent the day working from an iMac from the LINDSAY lab to make continuous adjustments to the Unity project’s configurations. I was admittedly nervous: even though the project had been tested extensively to ensure it was functional, Murphy’s Law states that anything unexpected could happen. After sharing dinner with the LINDSAY team, my supervisor and Jay Ingram’s team, we headed over to the performance venue as the skies began darkening. The show began smoothly enough, but when we reached the part on dopamine, the power suddenly went out: a thunderstorm had hit the area. Within ten minutes, the power was restored, and I breathed easier. The remainder of the performance continued smoothly, wrapping up with an electric violin performance from Ingram himself. No matter how many times I had seen the performance in rehearsals, Ingram and the Free Radicals were refreshing, engaging and immersive each and every time. Ingram’s masterful storytelling captured the audiences’ attention fully, being simultaneously entertaining, amusing and instructing. In the background, the Unity virtual brain ran seamlessly. After walking across the stage as a part of the development team, we left Banff and returned to Calgary under darkened skies. I spent the next day off, sleeping in, and after a debriefing with the team, it was decided that the remainder of August was to be spent tuning up the Unity project: because the initial build had been assembled in two months to meet the July 30 deadline, some best practises had not been observed, and it was important to refactor the project. A week ahead of the Beakerhead performance, the work was done. The Giant Walkthrough Brain Unity project had become extensible, easy to configure and sleeker than ever, just in time to be put on the planetarium screens at Telus SPARK. While there have been no more presentations of The Giant Walkthrough Brain since Kelowna, the project left a large legacy in its wake: for one of my colleagues, The Giant Walkthrough Brain would become the centrepiece in their Master’s Thesis, and the discoveries I had accrued as a result of the project led me to decide on the topic of my own Master’s Thesis. While The Giant Walkthrough Brain is no Apollo 11, and comes a mere five years later where the Apollo 11 moon landings have reached fifty, the project for me remains highly significant for having helped me come to terms with who I am, rediscover what it means to have a goal to reach towards and ultimately, for reminding me that even if unrequited love happens, I can still find my own happiness in lending my skills and knowledge towards the happiness of others. While not reaching anywhere near the same number of people or involving the same level of resources it took to bring Neil Armstrong, Buzz Aldrin and Michael Collins to the moon, The Giant Walkthrough Brain ultimately came to represent what the journey towards self-discovery look like – for me, this was one small step for me, and one giant leap for the future.

8 responses to “The Giant Walkthrough Brain: Revisiting a Presentation with Jay Ingram at the Five Year Anniversary”