Ano Natsu de Matteru: Reflections on the Infinite Skies and Wistfulness of a Past Summer Day

4 Comments Posted by infinitezenith on August 4, 2019

“Summer break was about to start, one we’d never be able to forget. I’m sure everyone felt the same way. Happiness and sadness, even pain, all of it put together in one package. There’ll never be another one like it.”

Kaito Kirishima is a high school student who enjoys recording with an old 8mm video camera belonging to his late grandfather. While out filming one evening, he encounters a extraterrestrial craft that crash lands nearby. The next day, Ichika Takatsuki transfers into their school. Drawn in by her beauty, Kaito invites Ichika to join him and his friends, Tetsuro Ishigaki, Kanna Tanigawa and Mio Kitahara in a summer project. Ichika’s classmate, Remon Yamano also joins in. Under the long summer days, the group work on their film, which Remon claims will have the same quality as a Hollywood production with her helming the script, and also struggle to come to terms with their feelings: Kaiton begins falling in love with Ichika, and Kanna feels increasingly left behind. Meanwhile, Tetsuro also deals with his unreciprocated feelings for Kanna, while Mio longs to make her feelings for Tetsuro known. As the summer progresses, Ichika’s background as an extraterrestrial is revealed. Kaito and his friends have no issue with this, but Ichika protests that her people’s government have begun searching for her, and explains that she arrived on Earth to find an important location. With her time on Earth limited, Kaito and his friends, with help from Remon and her connections to government assets, aid Ichika in finding this location. She ultimately is retrieved by her people, leaving the others with an incomplete film. Some years later during graduation, Kaito, Tetsuro, Kanna and Mio reminisce about the past and watch the now-completed film, suggesting that Ichika had returned at some point to complete it. Airing during the January of 2012, Ano Natsu de Matteru (Waiting in the Summer) is counted as the spiritual successor to Please Teacher!, which was also written by Yōsuke Kuroda: it is therefore unsurprising that both works feature similar elements and themes surrounding adolescent relationships and how these impact a group of closely-knit friends both by bringing people closer together and further apart simultaneously, as well as making the most of a moment because of how transient and fleeting experiences can be.

While Ichika, Kaito, Tetsuro, Kanna and Mio’s dealing with their feelings forms the core of Ano Natsu de Matteru‘s conflict, and the sci-fi aspects add an additional dimension of intrigue to the dynamics between Ichika and the others, there is an oft-overlooked component in Ano Natsu de Matteru: similar to its predecessor, Please Teacher!, the anime is set in Nagano, a prefecture known for its mountains and beautiful landscapes. The vast verdant fields, distant mountains, towering clouds and endless blue skies capture the feeling of summer, of openness and opportunity of a long day, but also creates a sense of melancholy. Without the hustle and bustle of a city, or the excitement of a coastal town, the landscape of Nagano paints a simultaneous picture of possibility and of wistfulness. This unending desire, this longing to be with someone. These are unsurprisingly the very same feelings that are experienced during the nascent stage of a relationship, and the choice of a landscape allows Ano Natsu de Matteru to visually represent how each of the characters are feeling. Indeed, the beautiful weather offered by the summertime creates a natural inclination to explore and capitalise on what a long, warm day has to offer. Longing and wistfulness permeate the whole of Ano Natsu de Matteru, and when coupled with the impermanence of certain moments, really adds to the sense that falling in love is a matter of great happiness, as well as of sadness. The use of a landscape to augment the thematic elements is nothing new: Please Teacher! and Yosuga no Sora have both made deliberate use of their respective settings to create another avenue to explore what falling in love feels like. However, in taking after its predecessor, Please Teacher!, Ano Natsu de Matteru uses a rural setting to present longing, rather than loneliness and isolation as Yosuga no Sora had done. Whereas Yosuga no Sora‘s setting allowed the series to convey how lonely the couples were outside of one another, Ano Natsu de Matteru and Please Teacher! both use the long days of summer and a remote setting to present a more positive, if still somewhat melancholy outlook on falling in love. 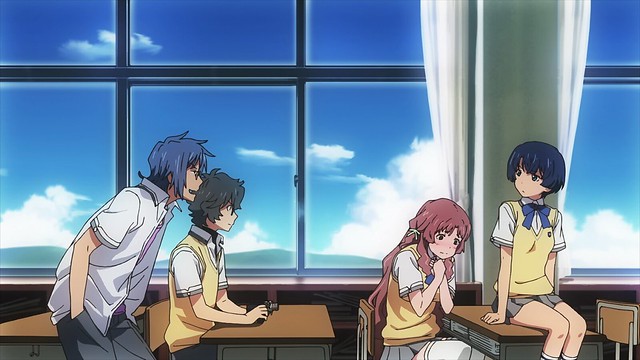 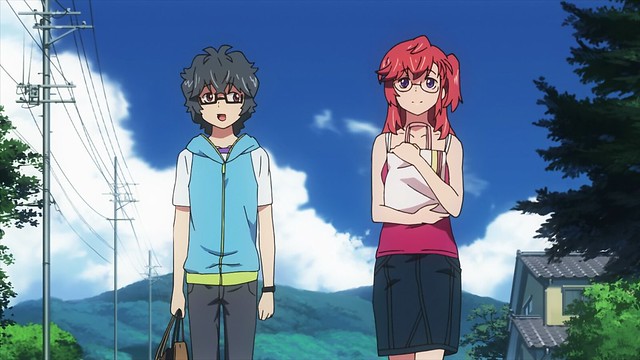 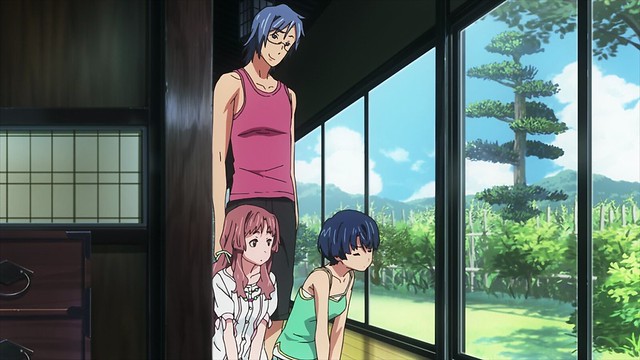 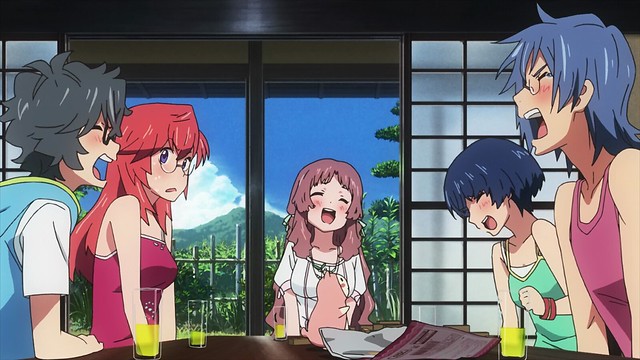 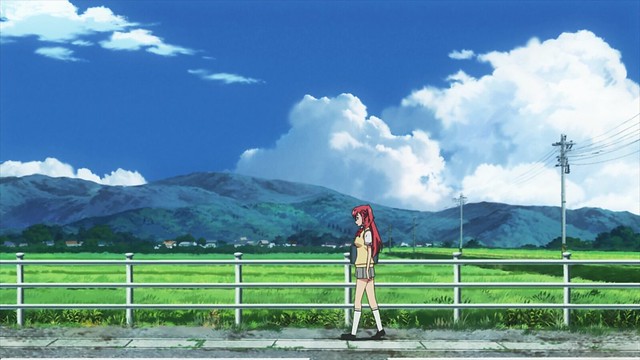 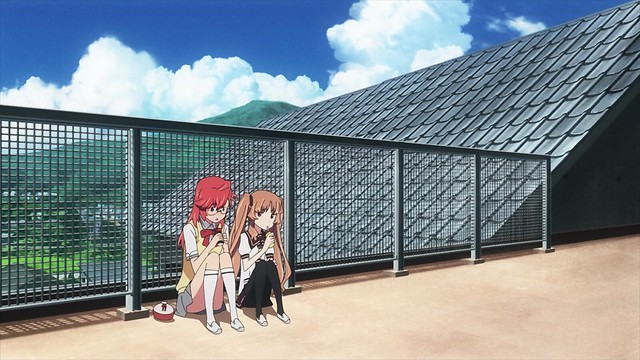 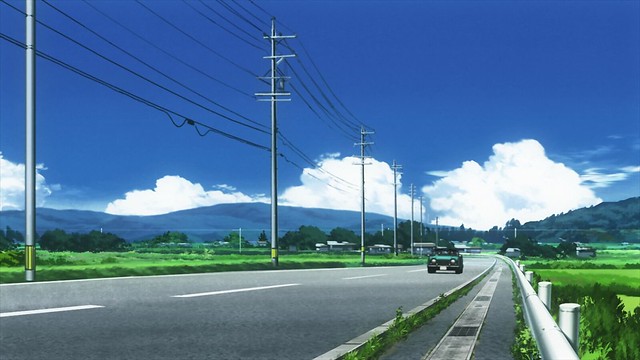 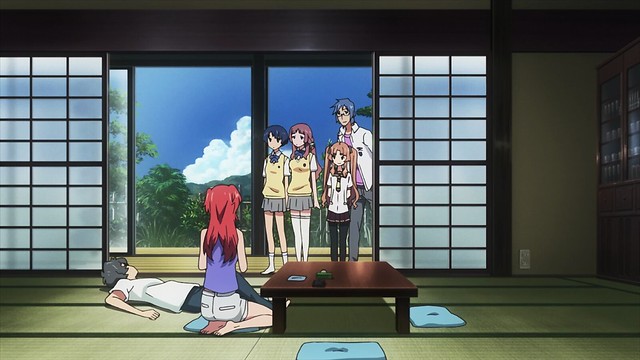 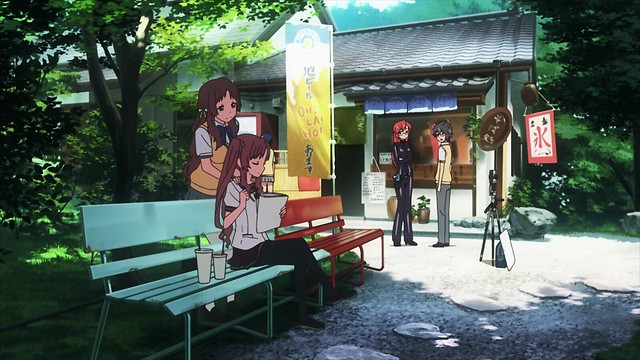 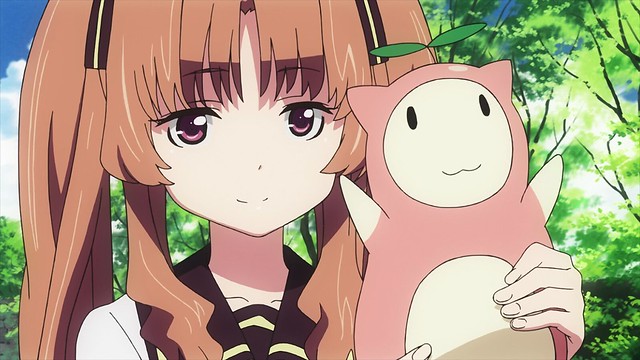 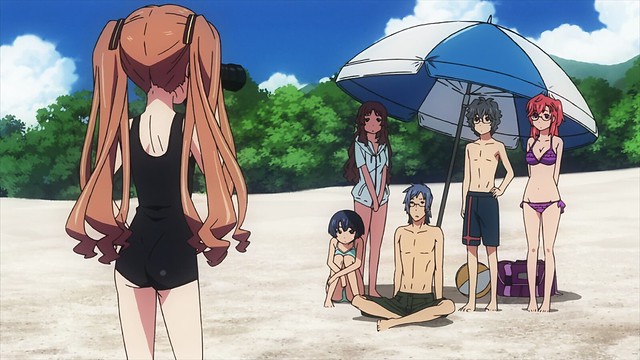 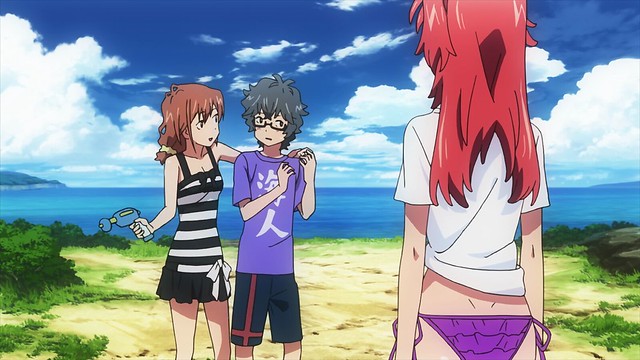 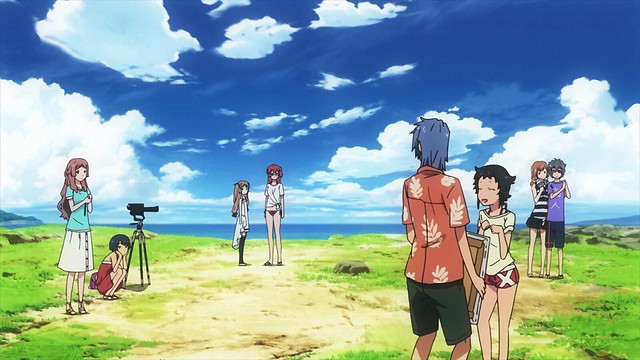 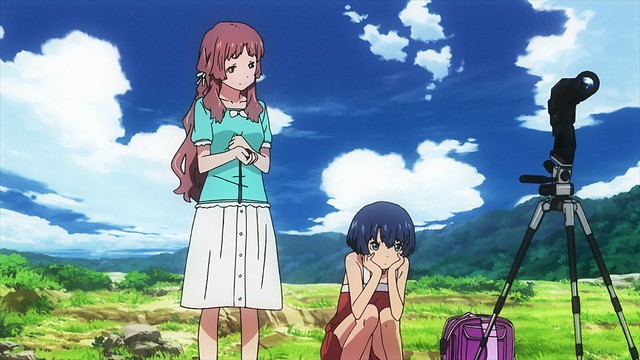 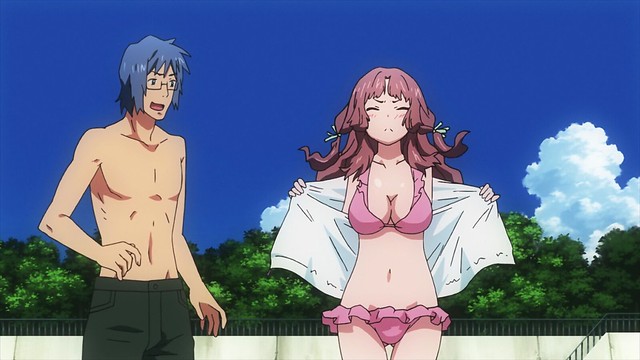 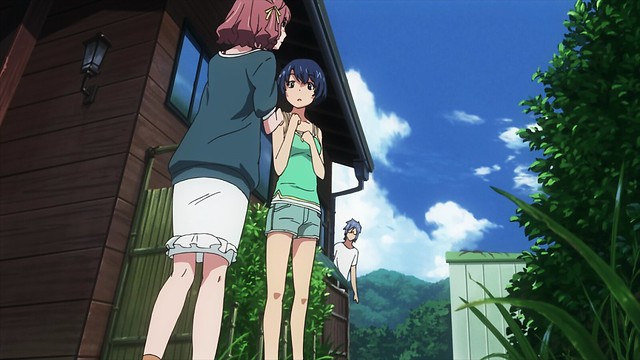 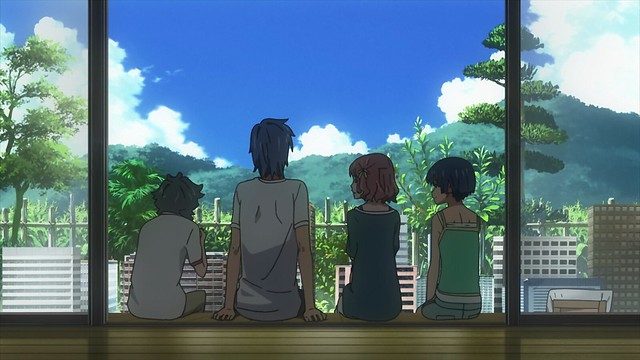 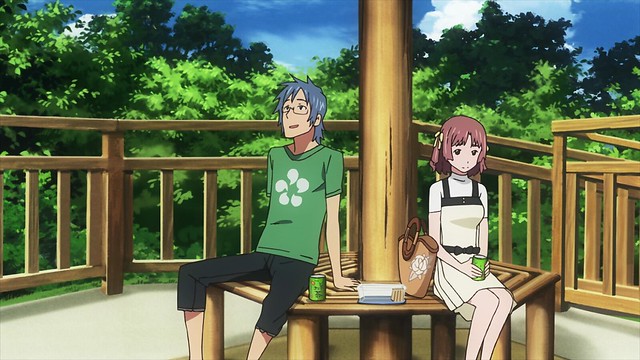 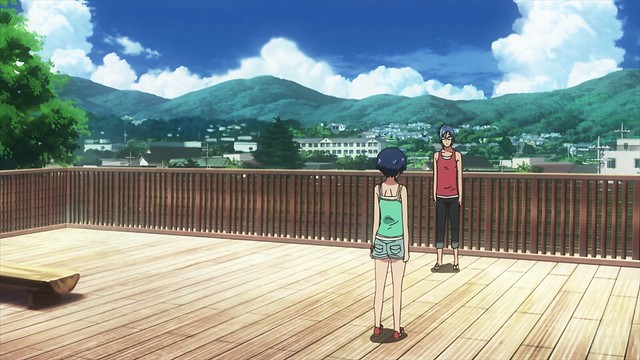 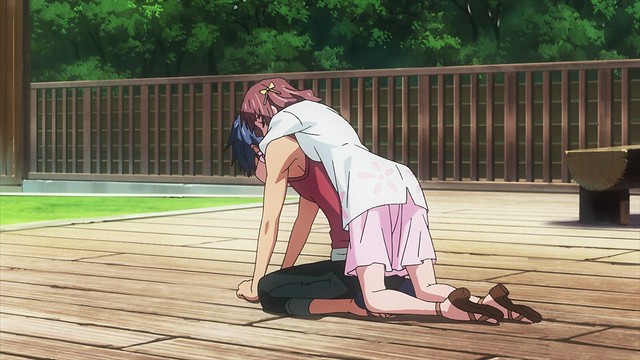 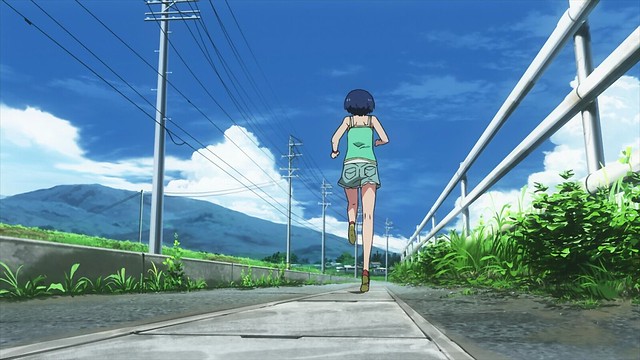 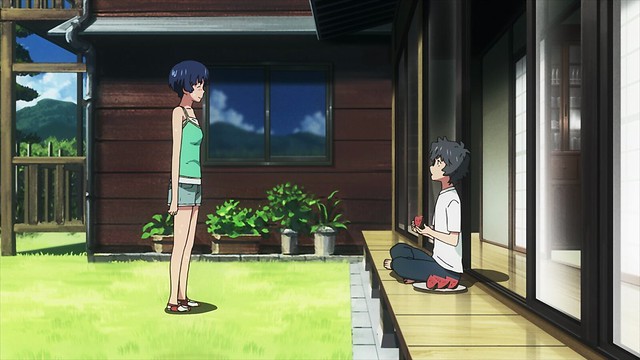 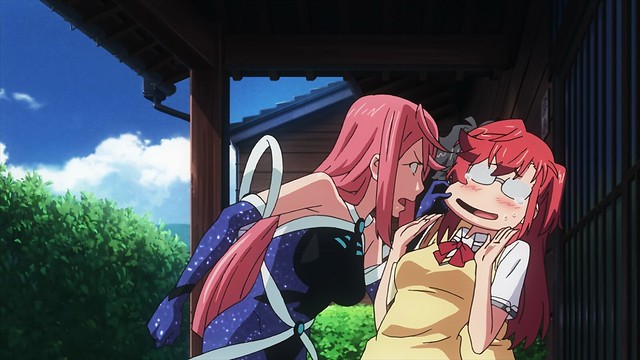 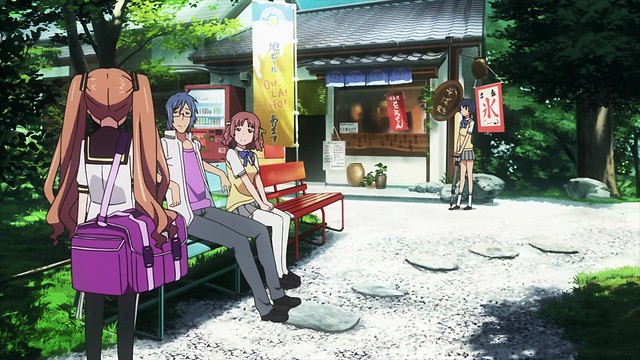 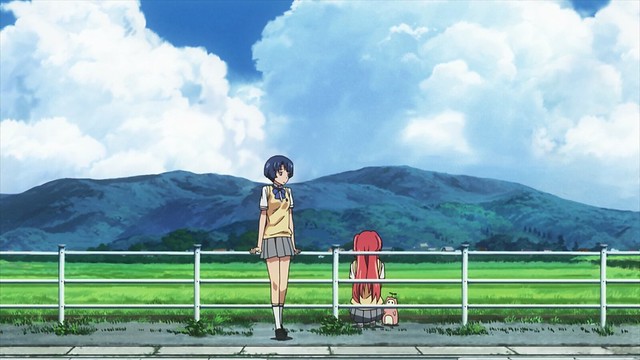 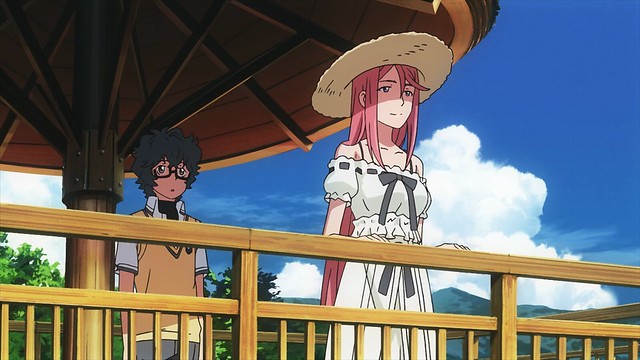 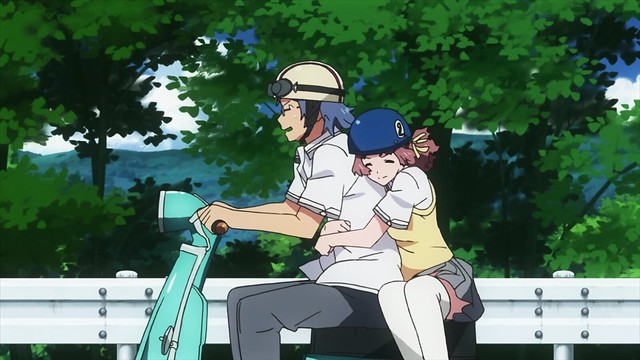 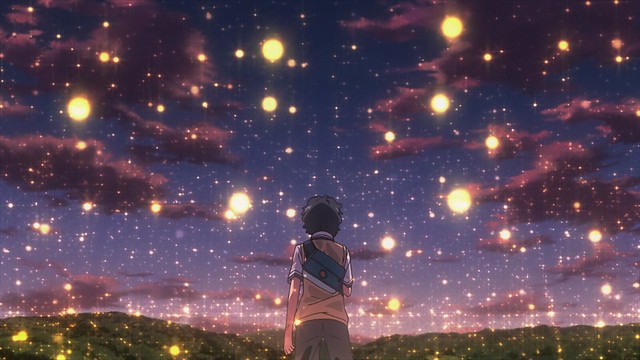 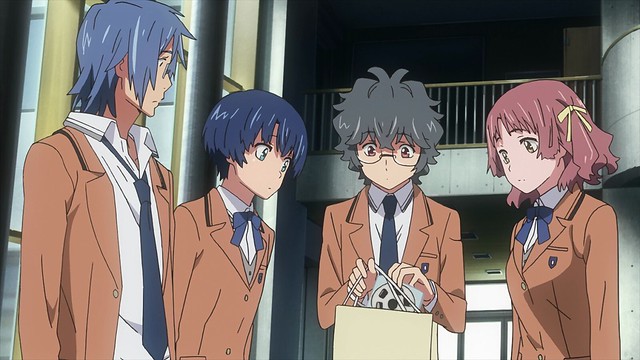 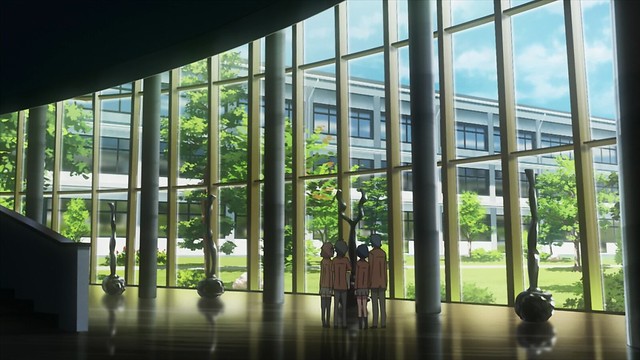 I’d actually been meaning to write about Ano Natsu de Matteru for quite some time: a few summers ago, I wrote about the OVA, which was an epilogue of sorts for the series. When I picked Ano Natsu de Matteru up, it was the summer of 2012, a time when I was preoccupied with studying for the MCAT, and upon finishing the series, I found it an enjoyable coming-of-age story that showed how awkward love matures into something more full-fledged and meaningful through persistence. Ano Natsu de Matteru‘s setting contributed greatly towards accentuating the different emotions that each of Ichika, Kaito, Tetsuro, Kanna and Mio felt and correspondingly, the enjoyment factor. However, in addition to the setting, Ano Natsu de Matteru also possesses a cast of relatable characters whose actions and emotions are plausible, the appropriate dose of science fiction, a balance between the dramatic and comedic, and finally, excellent opening and ending songs that fully convey the different emotions that Ichika and the others experience throughout the series. Ray’s Sign captures a very Kotoko-like tenour akin to that seen in Please Teacher’s opening, which had a very upbeat but distant feel, while Mami Kawada’s In The Forest of The Sky and Yanagi Nagi’s Bedoro Moyo share a slower, more melancholy pacing. The similarities between Ano Natsu de Matteru and Please Teacher! resulted in my eventually checking out the latter, and I found a very similar series with its own unique merits when I finished: Ano Natsu de Matteru is much lighter in tone and can be seen as being more approachable. Overall, I credit Ano Natsu de Matteru with establishing my association of the summertime with the juxtaposition between exploration and longing: for the longest time, I struggled to put these thoughts into words, accounting for why I’ve not fully reviewed Ano Natsu de Matteru. With this in mind, I have no trouble recommending this series for viewers seeking a romance-comedy with a science fiction flair and hope that anyone who’s seen this, or are planning on seeing it, find (or found) it as enjoyable as I did.

4 responses to “Ano Natsu de Matteru: Reflections on the Infinite Skies and Wistfulness of a Past Summer Day”