“Kamihama…you fear to go into those streets. The Magical Girls delved too greedily and too deep. You know what they awoke in the darkness of Satomi…shadow and flame.”

In a dream, Iroha learns that Ui might be in Kamihama City’s Satomi Medical Centre and sets off to investigate, against Nanami’s warning. She finds herself amidst a Witch’s labyrinth; the Witch itself is locked in combat with a team of magical girls. These girls are successful in destroying the Witch, but Iroha is knocked out. When she comes to, she finds herself in a sanctuary for magical girls: this team introduces themselves to her as Momoko Togame, Kaede Akino and Rena Minami. It turns out they’re searching for the elusive “Chain Witch”, but in spite of their objectives, agree to help Iroha look for Ui (although Rena is reluctant). Iroha enters the Satomi Medical Centre and learns that there was never a patient by Ui’s name in the records, and after the girls go out to discuss options, a verbal argument breaks out, culminating in Rena leaving. Kaede attempts to reconcile with Rena, but is captured by the Chain Witch. Iroha meets Yakumo Mitama, a Coordinator who operates the sanctuary, and learns that Yachiyo is also a member of their group. They agree to an operation to lure out the Chain Witch; it turns out that feigning a fight won’t draw the Witch out, but Rena’s feelings get the better of her. The Chain Witch materialises, and Kaede turns out to be okay. The girls subsequently engage and destroy the Chain Witch, aided by the smaller Kyubey, who points out a weak spot. When the battle ends, the lack of a Grief Seed leads Yachiyo to conclude the Chain Witch is not a conventional Witch. Rena later learns that the two other girls beside Ui in Iroha’s dream, Toka and Nemu, were indeed patients at Satomi, and elsewhere, Kyubey reveals that he’s unable to enter Kamihama: he sends one Mami Tomoe to investigate. With the third episode and the appearance of Mami, it is established the series’ events are being set prior to the events in Madoka Magica. The third episode of Madoka Magica became infamous for its brutal killing of Mami, who was consumed by a Witch during combat, and the marked contrast between Magia Record‘s third episode indicates that the themes here are unlikely to be as grave and sobering as those of Madoka Magica.

Indeed, Magia Record‘s premise of having Iroha investigate a mystery surrounding someone dear to her is already dramatically different than Madoka Magica: whereas the former was really about the toll that wishes extract, Magia Record‘s themes and goals seem much more consistent with that of a game, favouring exploration and discovery. The episodes to Magia Record have insofar focused on presenting how limited and inconsistent Iroha’s recollections are, which compels one to follow the story with the goal of watching this mystery unravel. Along the way, Iroha meets a group of Magical Girls who will, in time, act as resources and allies to fall back on in her adventures, and Iroha learns that Soul Gems can be boosted to increase the Magical Girls’ power and ability in battle. Drawing elements from a game, Magia Record‘s progression feels more purposeful, leaving no doubt that Iroha will be finding something during and towards the end of her journey. However, Magia Record also lacks the same grim and uncertain atmosphere of its predecessor: with no major deaths early on, Magia Record feels much more laid-back and conventional. As such, Magia Record must strike a balance between creating novel new events to keep viewers engaged, while at the same time, avoid venturing into the melodramatic territory that Madoka Magica ended up in. It goes without saying that Magia Record has some large shoes to fill, and in the shadows its predecessor left behind, Magia Record is seen as being something that faithfully captures the atmosphere and feel of Madoka Magica while simultaneously exploring new directions that add to the franchise. Fortunately, three episodes into Magia Record, the anime has proven engaging and enjoyable in its own right. 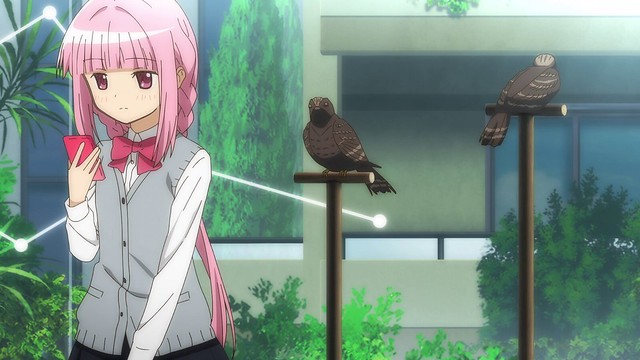 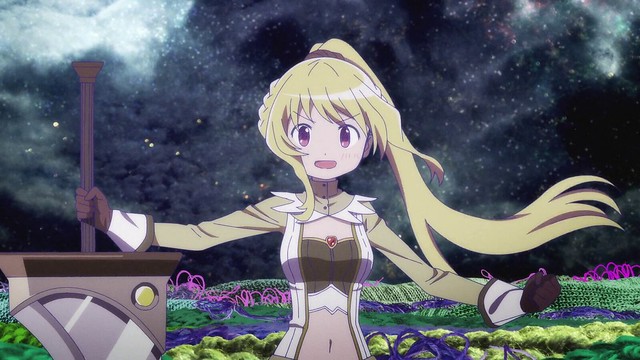 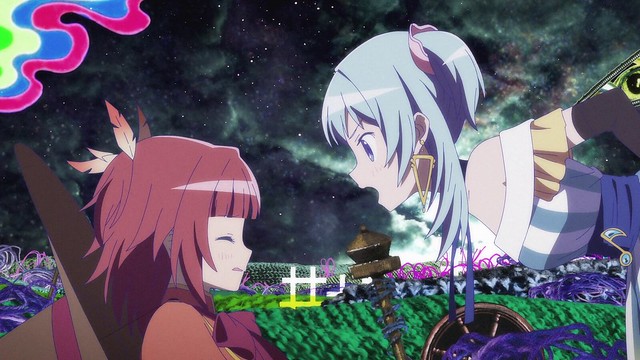 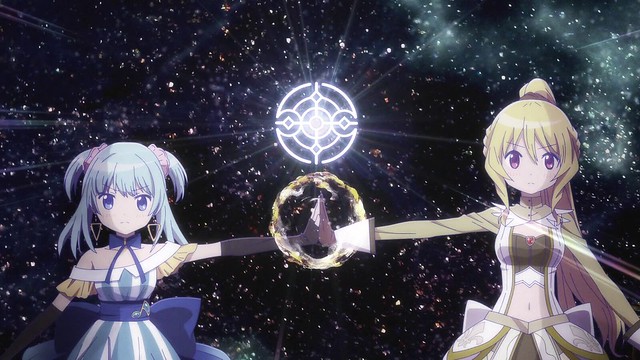 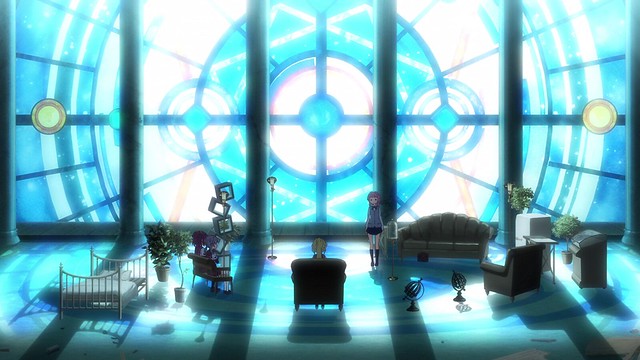 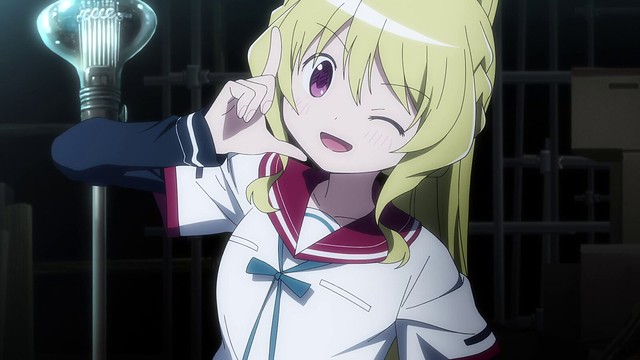 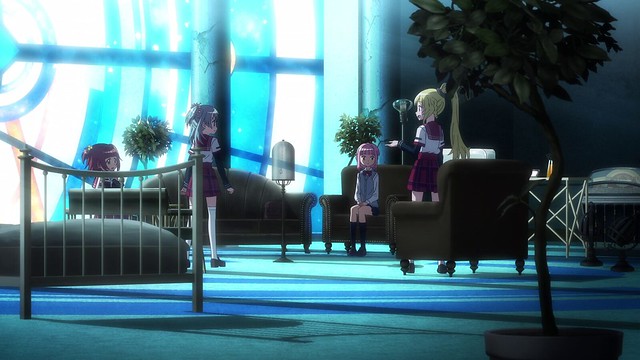 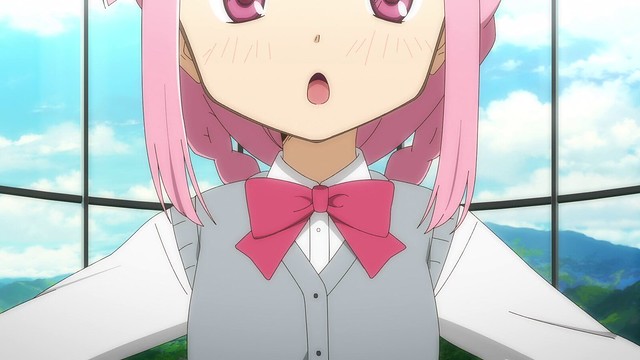 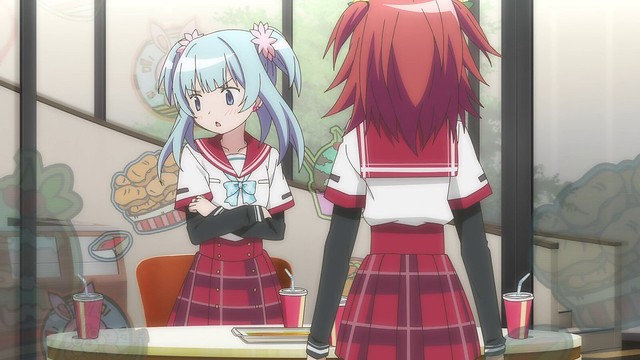 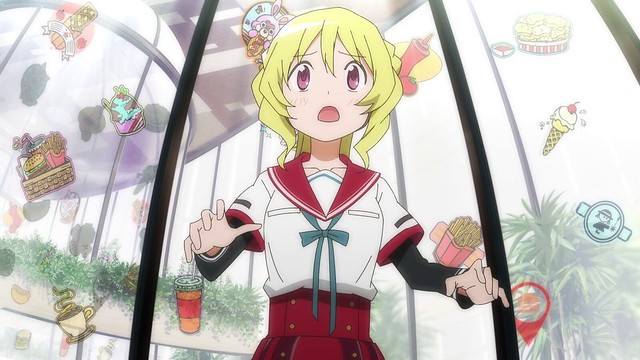 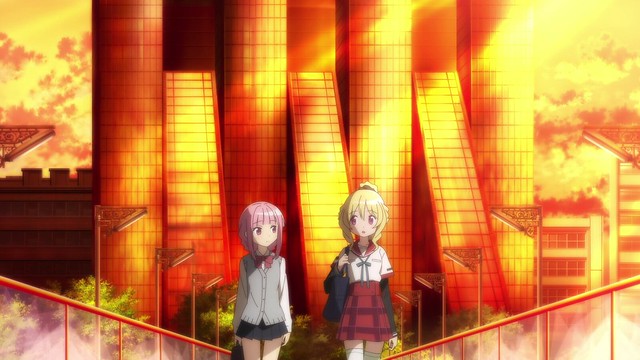 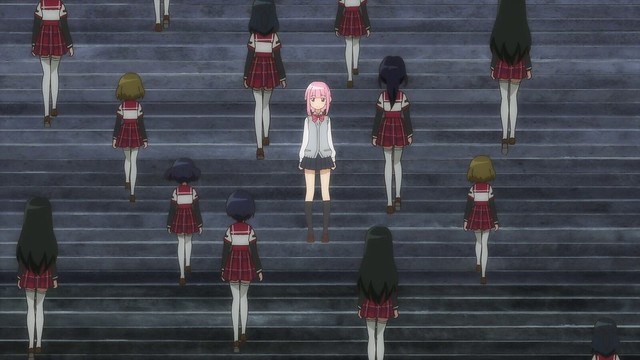 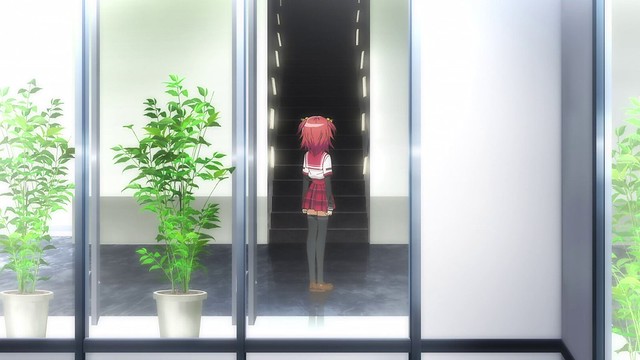 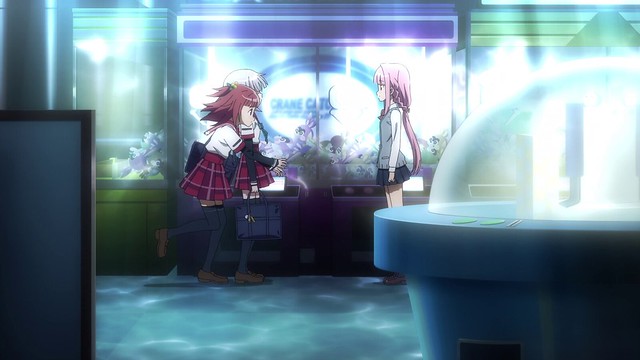 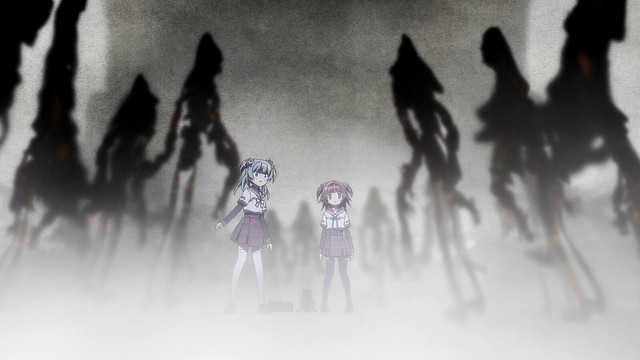 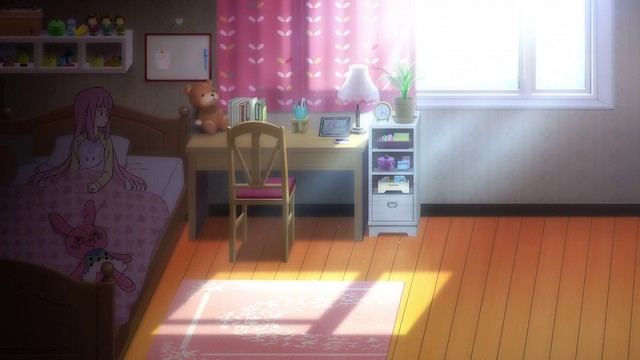 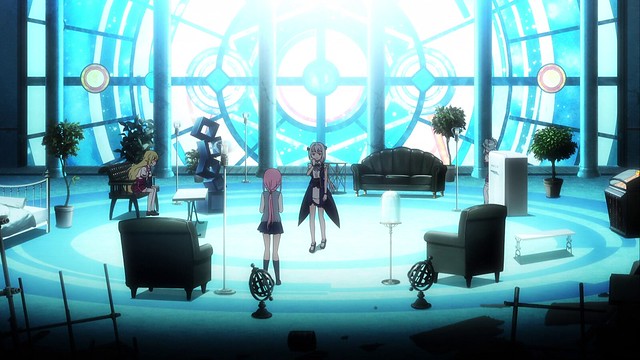 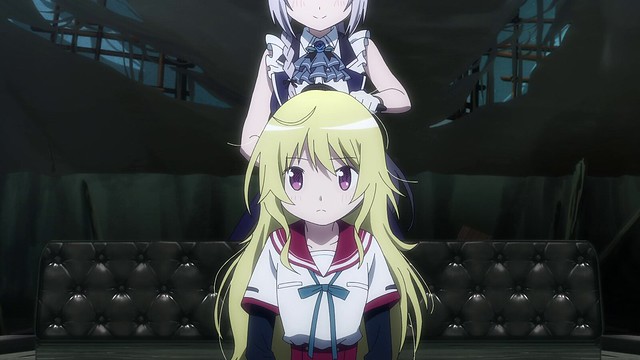 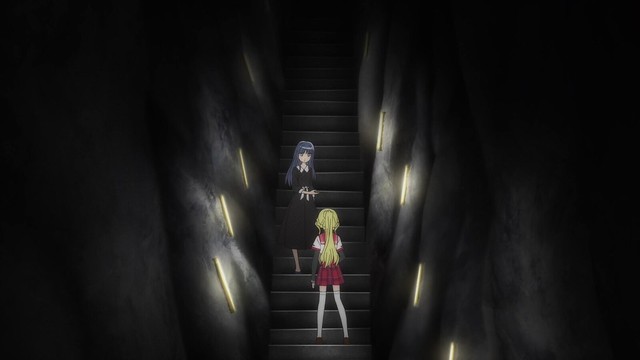 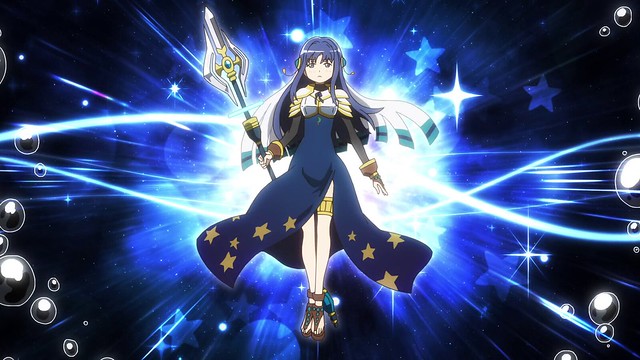 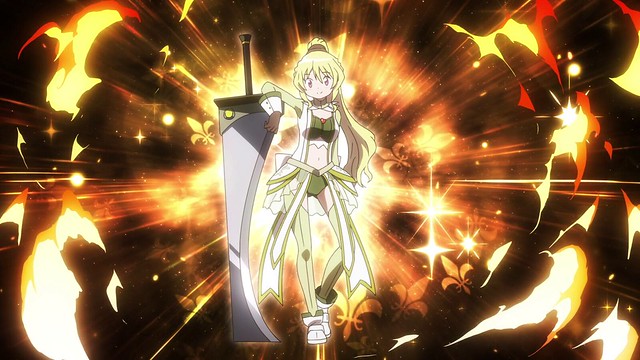 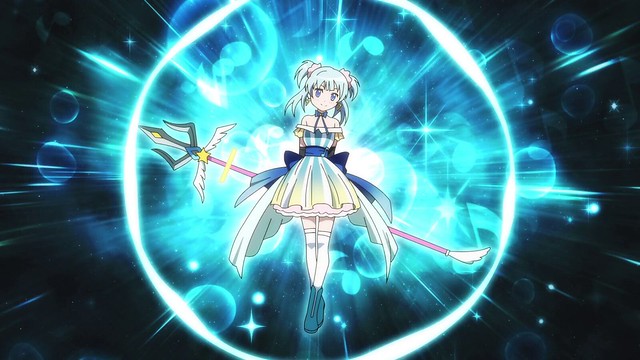 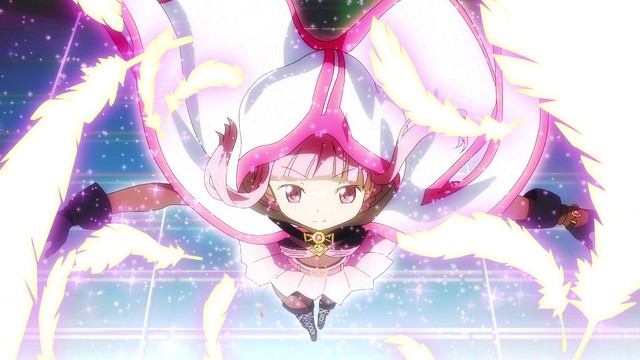 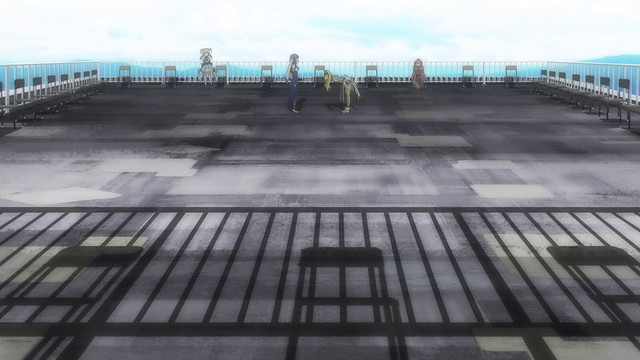 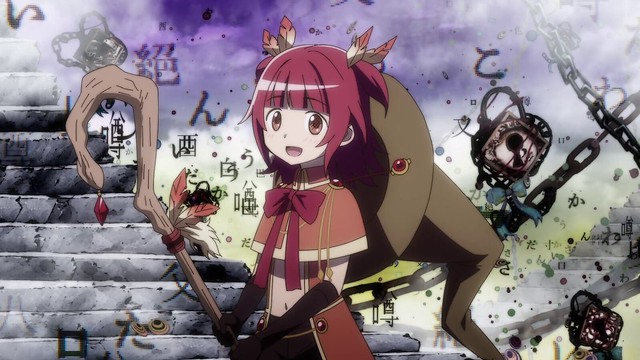 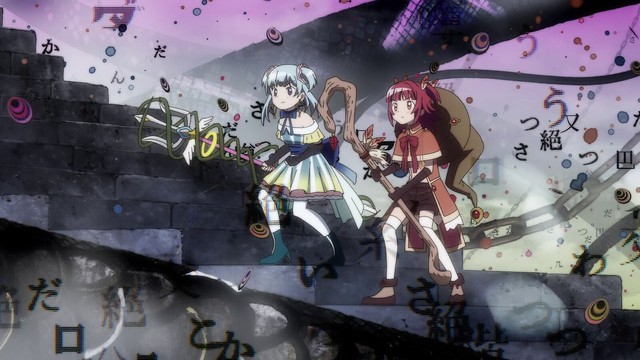 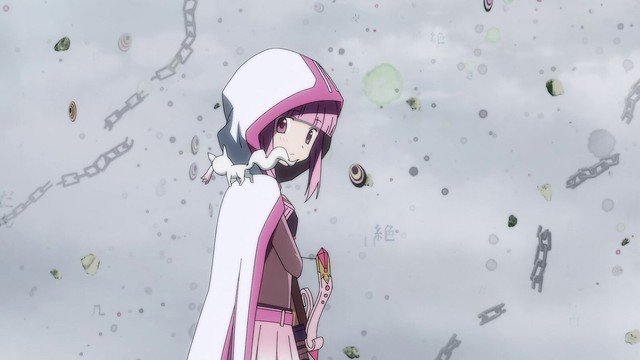 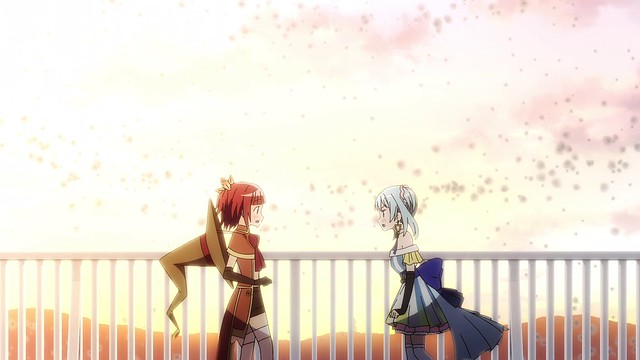 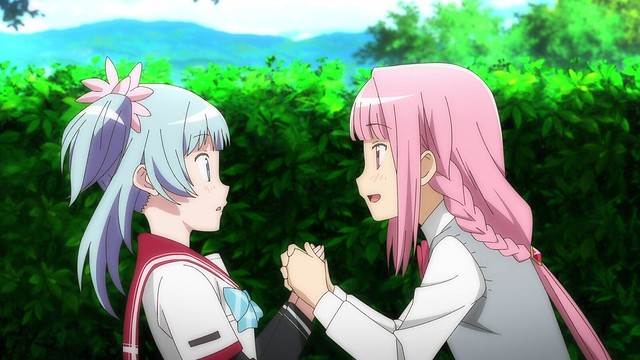 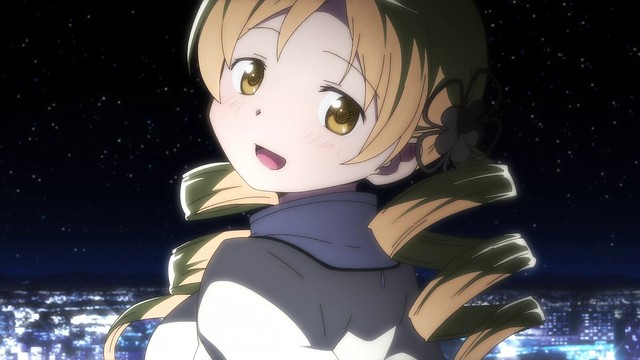 More so than any other element, the characters in Magia Record (and their interactions) have been the show’s strongest aspect: all of the characters, even Rena, are likeable in their own regard. Iroha represents the newcomer with limited experience and skill, but a strong motivation and open-mind that allows her to open up to others very quickly. Kaede is a girl with a gentle disposition who is willing to hear out Iroha, and Rena, despite her blunt words, is revealed to genuinely care for those around her. Momoko is similarly a captivating character, combining the maturity and confidence that Mami had, with the leadership traits from Yūki Yūna is a Hero’s Fū Inubouzaki. Friendly and composed, Momoko is also shown as being flippant and laid-back almost to a fault: when her friends fight, she makes off-hand remarks that worsens the situation. All of the characters have their strong points and flaws that make them relatable, giving viewers incentive to root for them as they work together to solve Kamihama’s mysteries, some of which could be as terrifying as Durin’s Bane. Of course, because Madoka Magica set the precedence for unexpected (and often unpleasant) surprises, it would not be unexpected for any one of Iroha’s new-found friends to suffer an untimely exit from Magia Record. With all of these items on the table, Magia Record is looking to put on a fantastic showing this season, and I look forwards to seeing what Iroha and the others find as a result of their quest for answers, as well as what these Magical Girls learn during the course of their time together. I will be returning once the series has concluded to write more comprehensively about Magia Record, and until then, I leave readers with a brief explanation of the page quote: we still don’t have a clear picture of what exactly is in Kamihama, but whatever it is, it’s going to be something at least as troubling as a Balrog of Morgoth.

One response to “Magia Record: Review and Reflections After Three”